Helios 44M-6 with multilayer coating is a sharper version of Helios after 44M-5. The most common competitors are standard Helios 44M-4 lenses for Zenit-11 cameras and their analogues. The lenses were produced at the Jupiter plant in Valdai

Helios 44M-6 - lens for SLR cameras Zenit with threaded connection M42. This lens is installed on modern SLR and mirrorless cameras through the appropriate adapter. Read the article about adapters.

Helios 44M-6 looks like a German Pentacon auto 50mm f1.8 and analogues. Despite the fact that the lenses were produced more than 30 years ago, they still continue to delight users with the quality of the picture and the indestructible construction. The lens from the review with multi-coating, this meant more resistant to loss of detail and manifestations of various types of aberrations when working in backlighting. Review lens provided by Vladimir Ekimovsky, for which many thanks to him! 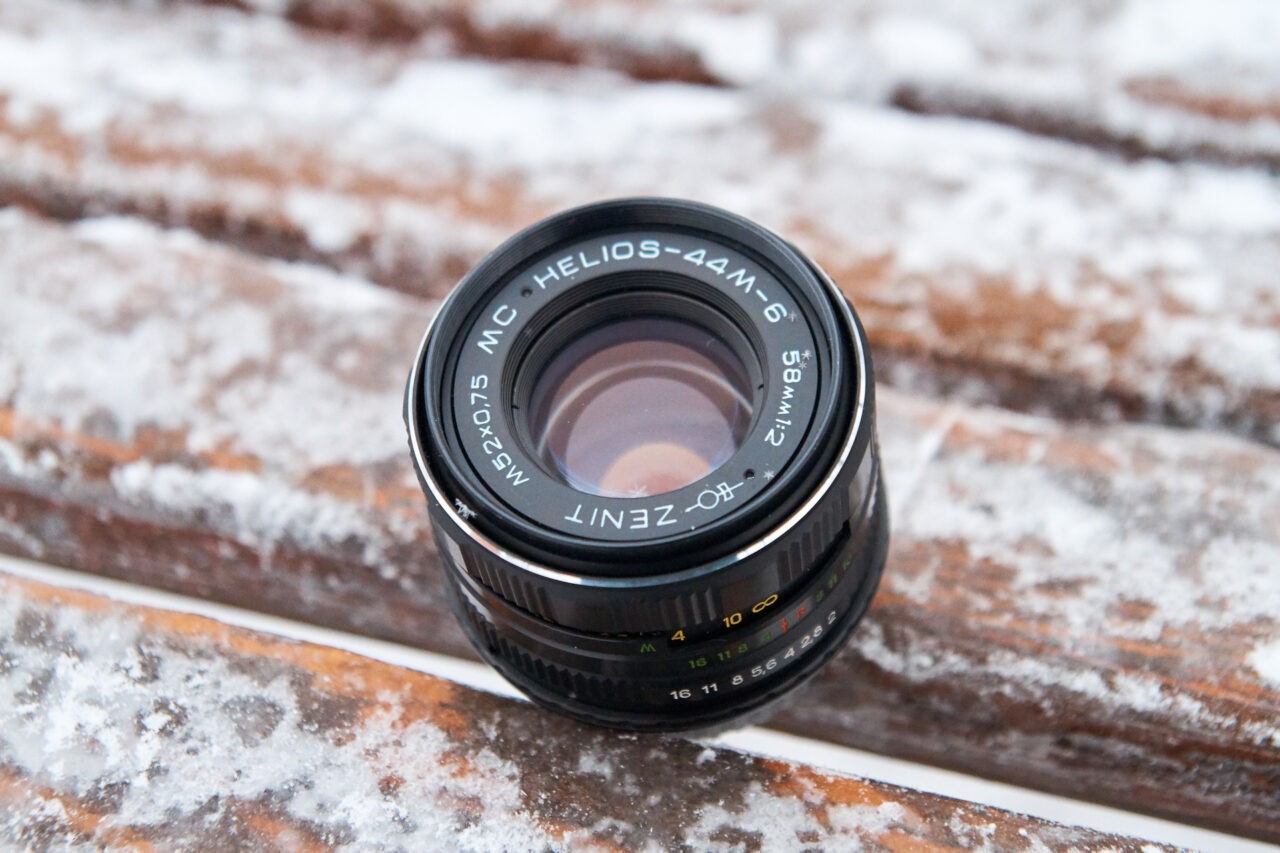 Attention! The lens is a kit. What is a kit lens?

The lens is made of aluminum, the rim is engraved in Latin letters like "Helios 44m-6 2/58". There are steel and brass elements in the lens mechanism. The weight of Helios 44m-6 is about 240 grams. Compared to the 44M, the lens is simplified and lightweight, the body looks different, however, the overall style is preserved. 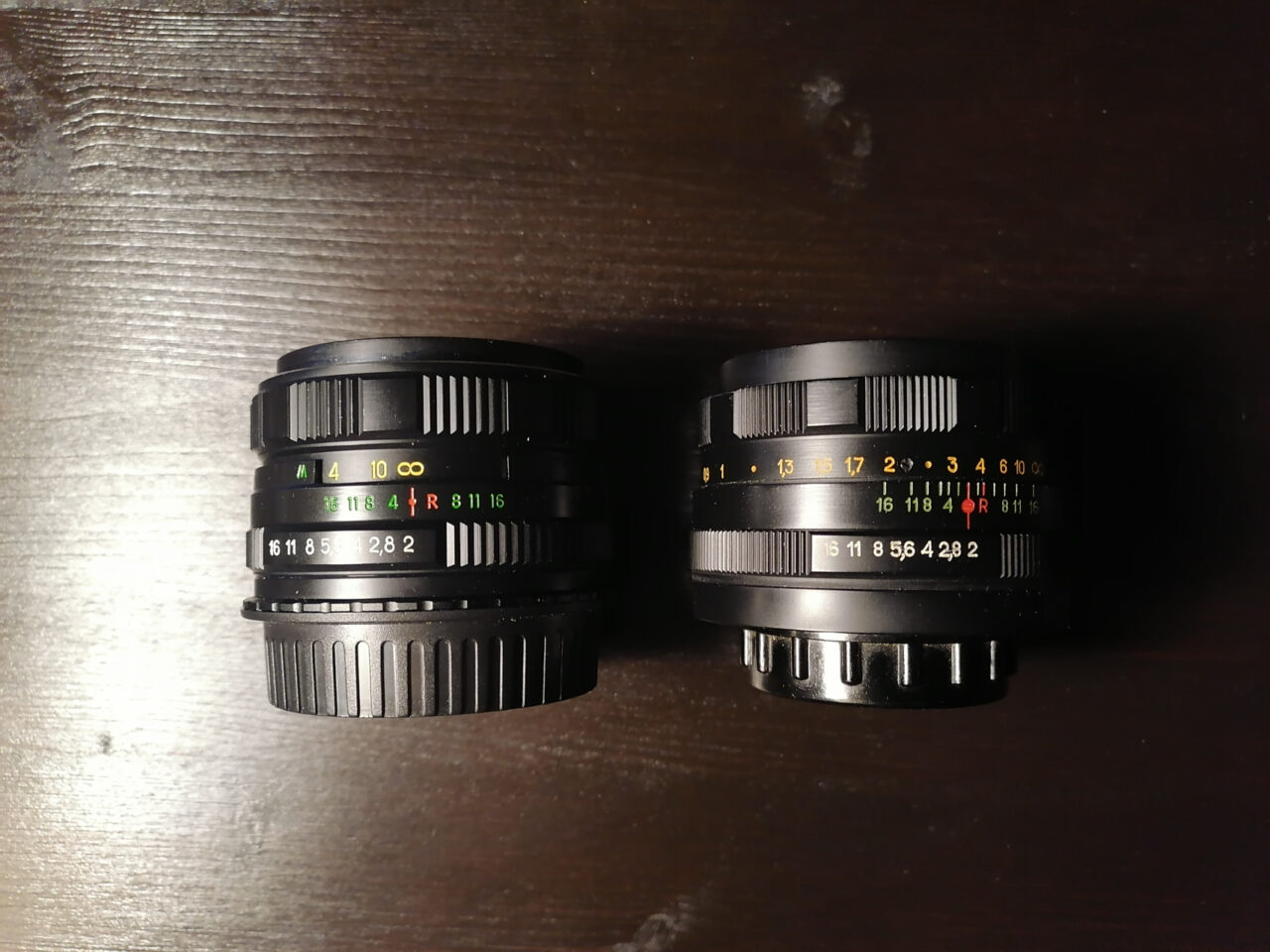 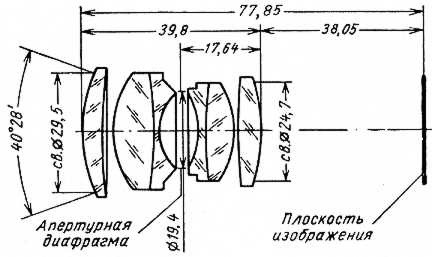 Helios 44M-6 is a typical planar, with its own advantages and disadvantages.

Focusing Helios 44M-6 is carried out within 0,5 - 14 meters, the values ​​are approximate. The minimum focusing distance is marked at 0,55 meters, but there is always a "fly over". I believe that the MDF is closer to 0,5m. The Helios 44M-6 focusing ring is grippy, ribbed. Focusing is provided by rotating the focusing ring around the lens unit axis. There is no autofocus, although foreign counterparts have already been equipped with it with might and main. On a serviced lens, the ring rotates easily, but not always without jamming, since the guides and the body are made of metal. A properly serviced lens, as a rule, does not have any comments on the smoothness of the rotation of the rings. How to service your Helios - in this article. 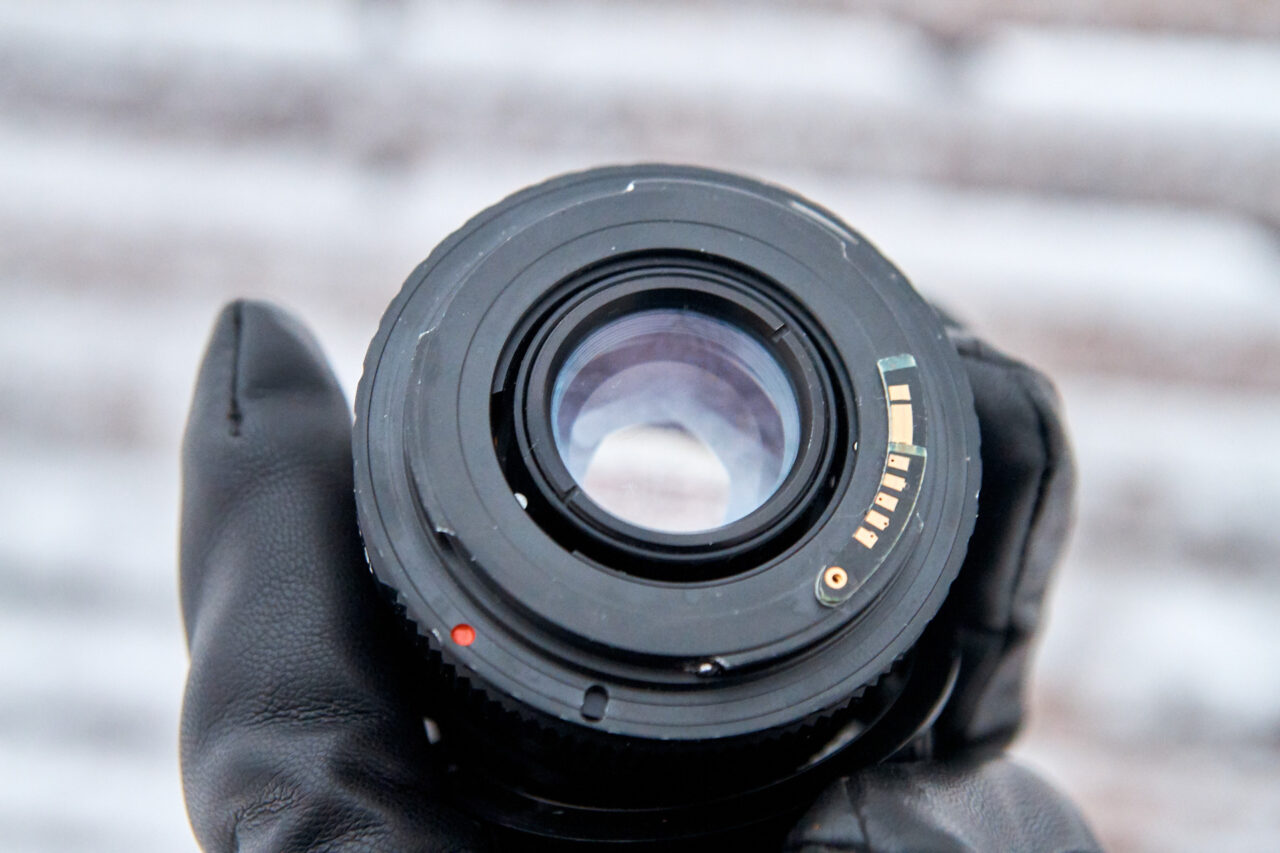 The protrusion of the front edge of the lens barrel at the maximum focusing distance is about 1,1 cm, at the minimum - about 3,5 - 3,7 mm. Threaded filters or hood are screwed into the frame.

Helios-44M-6 is equipped with an automatic diaphragm, a drive blocking switch is present. The diaphragm actuator can be locked with flange adapters or manually. lock is required if your camera is not compatible with the design lens (and it will not be compatible, since there is no such diaphragm pusher on modern cameras). The diaphragm is adjusted with a ring with a detent, and the switching of the values ​​itself occurs with effort. The aperture ratio ranges from f / 2 at open aperture to f / 16 at fully closed aperture. 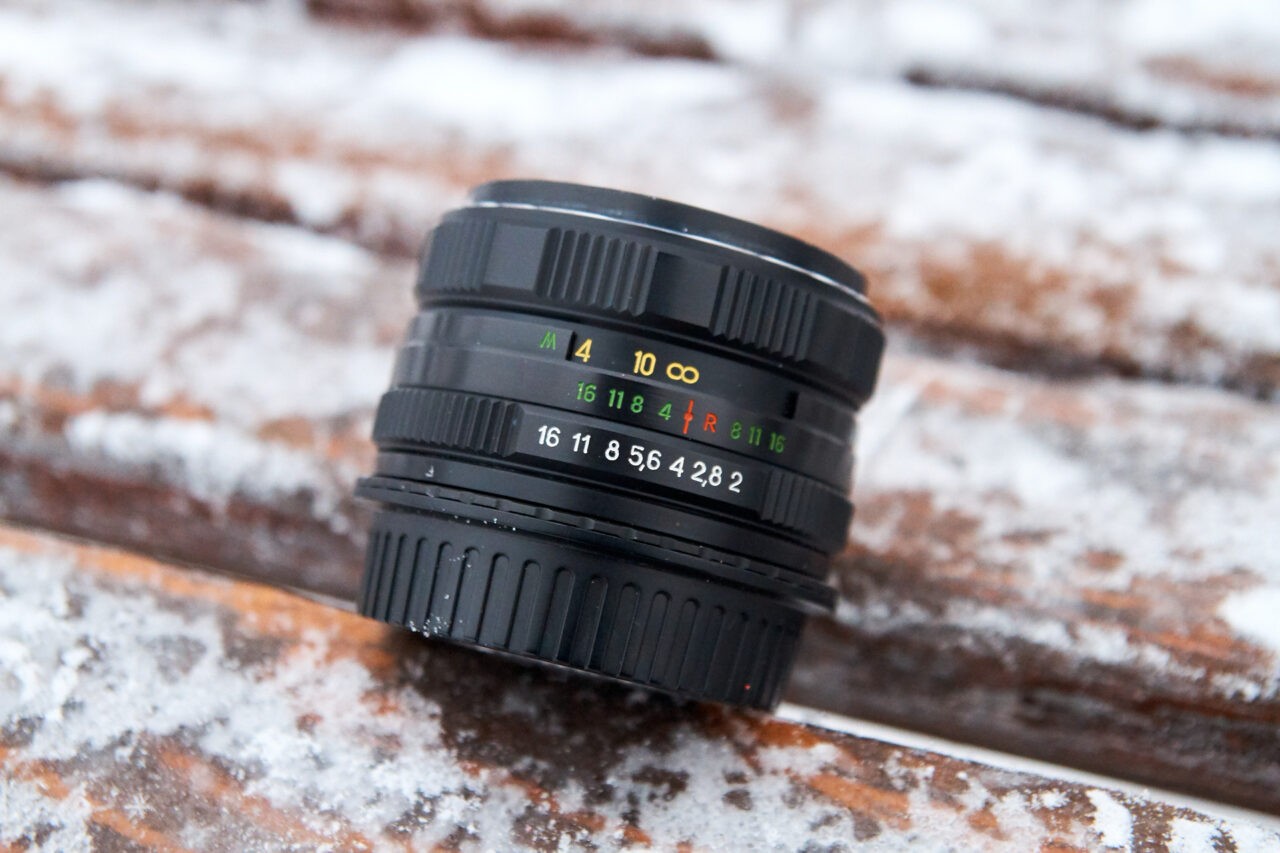 The aperture of Helios 44M-6 has six blades, pronounced nuts in hips appear already at f / 4. But this is not a hindrance, is it? 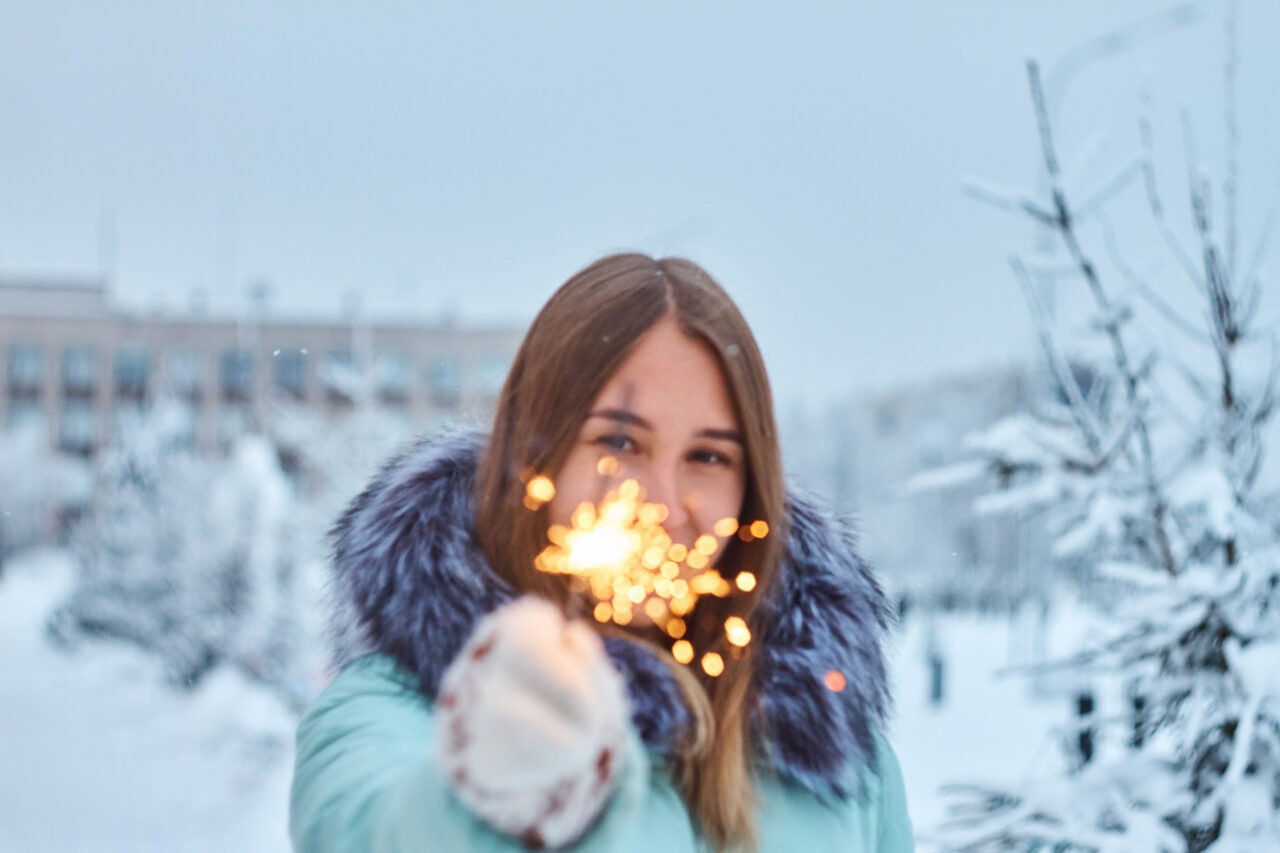 The depth of field calculator is made in the form of a cutout in the case. Depth of field values ​​are marked below the notch.

Modern digital cameras estimate the exposure level in the frame at an open aperture lens (in fact, old films too). When using any manual lenses at aperture other than open, you will have to enter exposure compensation. In the case of this Helios, I did not have to adjust the exposure depending on the conditions. The camera behaves quite predictably with this lens (Canon 7D).

Shoot in RAW, especially if you're working with Helios for the first time.

Without removing the aperture ring lock, Helios-44M-6 is not suitable for video shooting with sound and soft focus shift, with on-the-fly depth of field control. Since the sharpness bar is thin, it is difficult to control when focusing through the optical viewfinder. Sharpness is controlled by rotating the focus ring and aperture according to circumstances.

On an open aperture, noticeable "twisting" in the out-of-focus area (hips) on the crop is not quite pronounced, color aberrations on contrasting transitions were not noticed. Perhaps I am already so overwhelmed that I simply do not pay attention to it. excuse me. Twisting the background is highly regarded by some users as it gives the photo an extra artistic touch. MC Helios 44M-6, possibly, swirls the background, but it was not possible to test it in the full frame. 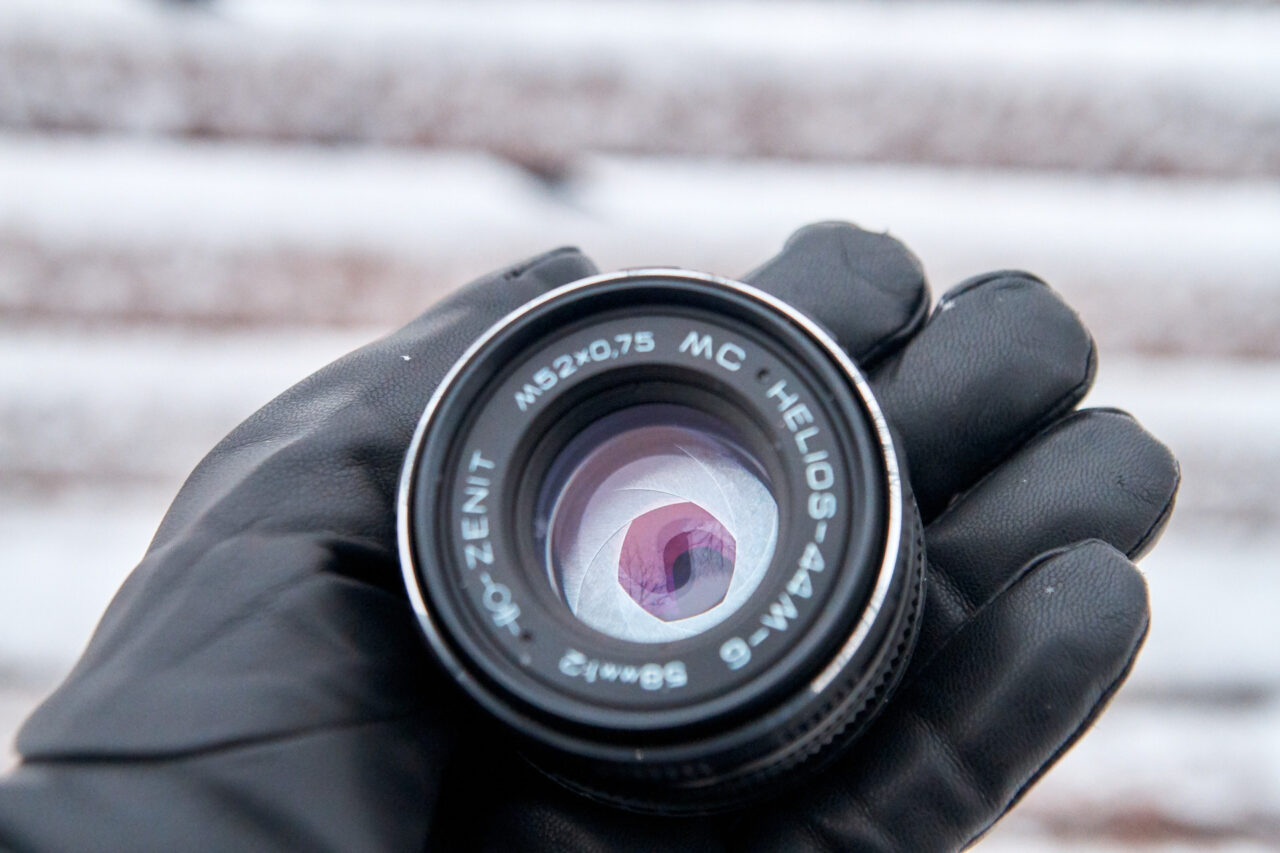 Sharpness in the center is appropriate, at the level of modern lenses, falls towards the edges. Not as much as in Mir-1B, but noticeable if you look closely. In general, I find excellent sharpness on the crop. Worker with open. Those who spit in the direction of Soviet fifty dollars simply do not know how to shoot. 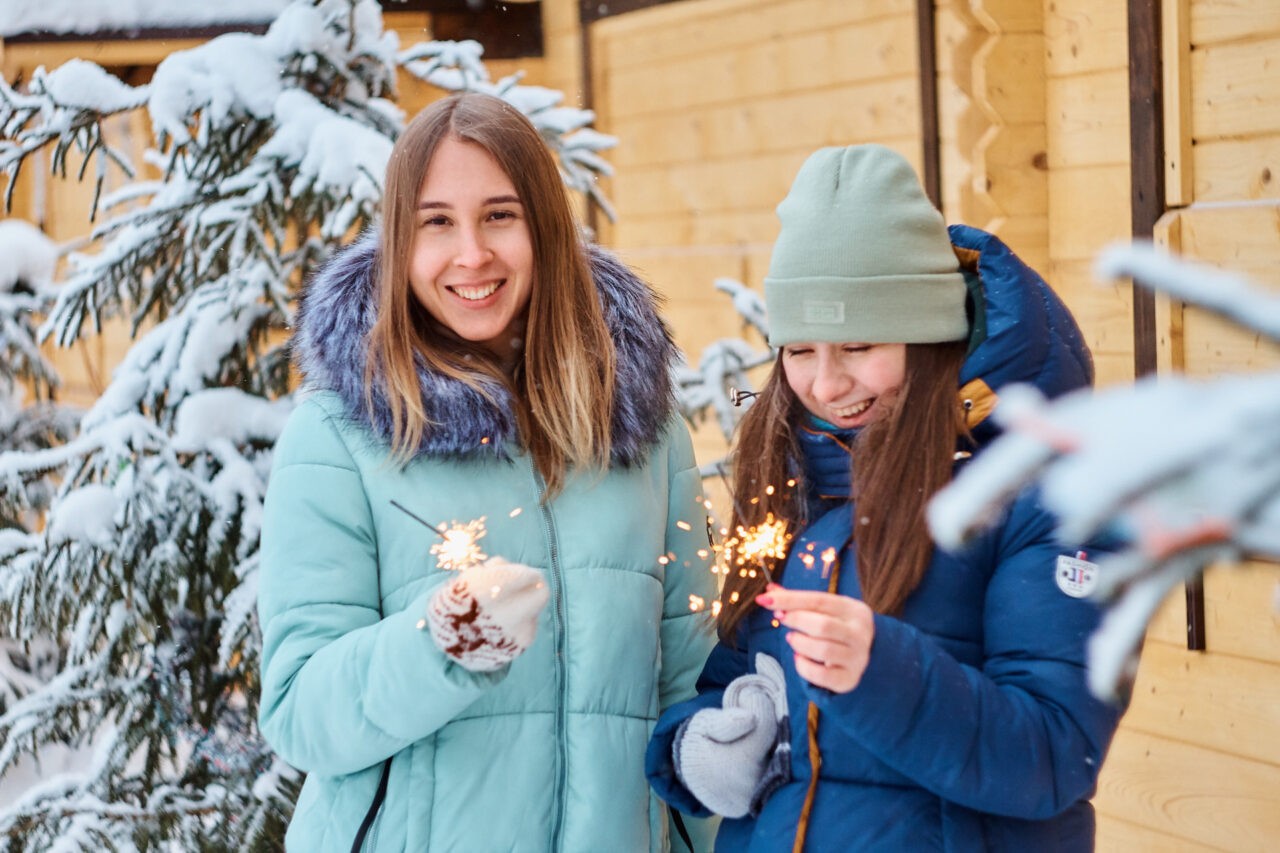 Contrast at lens at a normal level, however, when exposed to bright light, it sags, despite the multilayer enlightenment. However, the lens was not tested on a sunny day. Perhaps you should compare several different versions of the lens with and without MC in order to draw any unambiguous conclusions. When illuminated by an artificial source, Helios MS gives slightly less re-reflections than its younger brother 44M without multilayer enlightenment.

Find out the weak points of your Helios in order to avoid obviously failing compositions. 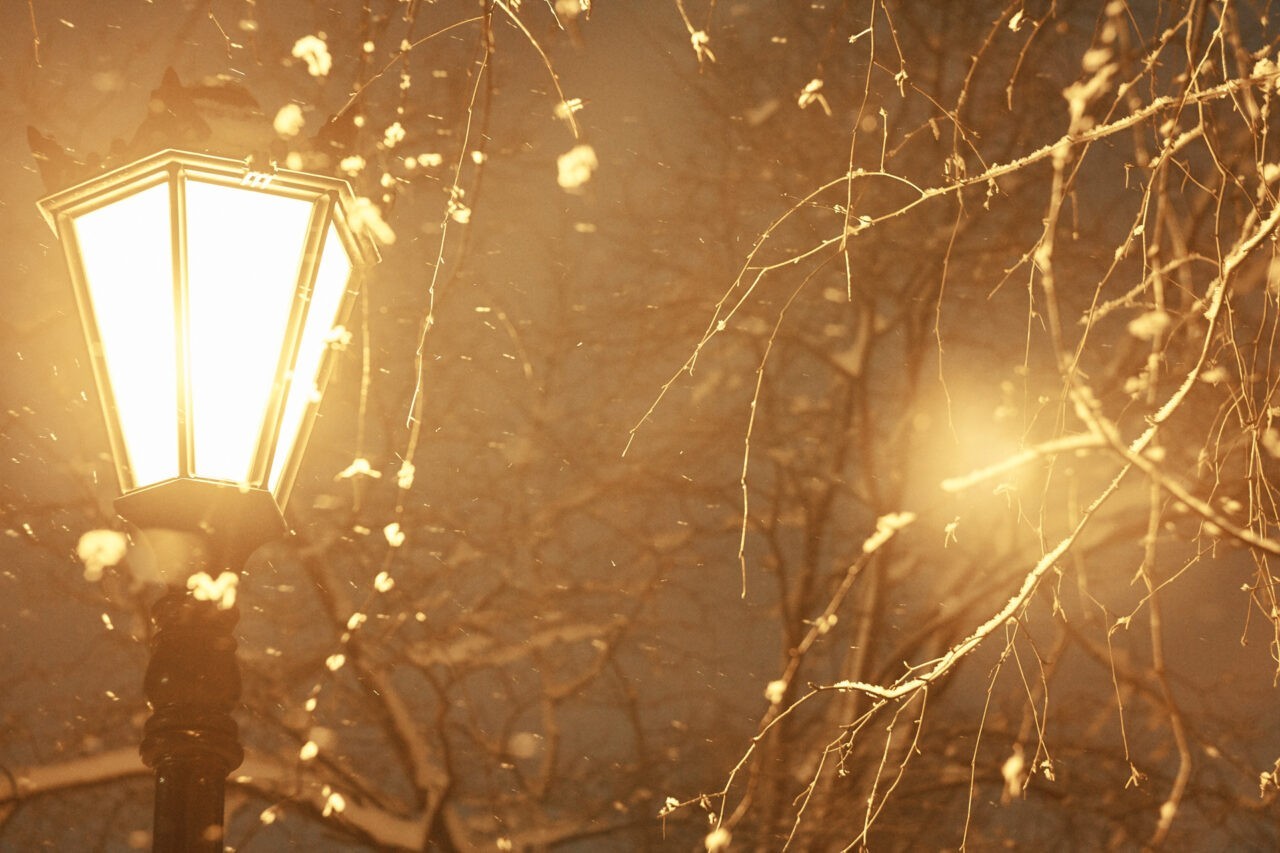 Even cosmetically killed specimens retain their basic qualities - shooting on such glass can be a pleasure. 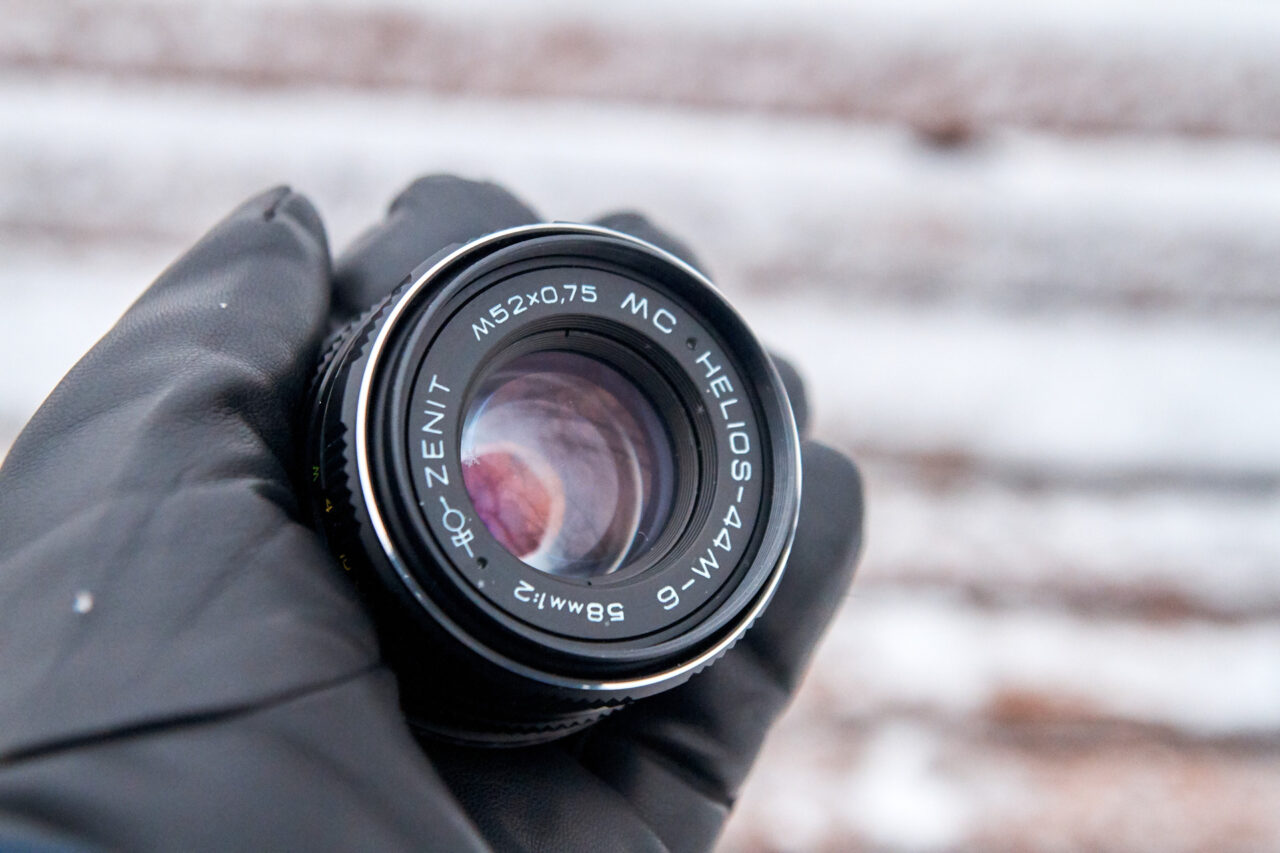 On a camera with APS-C sensor (kf = 1.6) the camera will have a field of view equal to the equivalent 93mm focal length, and the aperture will correspond to the value f / 3,5. At full frame, the lens works as intended - it has a more plastic picture and the characteristics corresponding to the declared ones.

The easiest way to shoot is in the mode Aperture Priority (Av)when the camera adjusts the required shutter speed based on the current aperture value and the light in the frame. To work on digital cameras, you need an adapter from the M42x1 threaded connection to your camera. 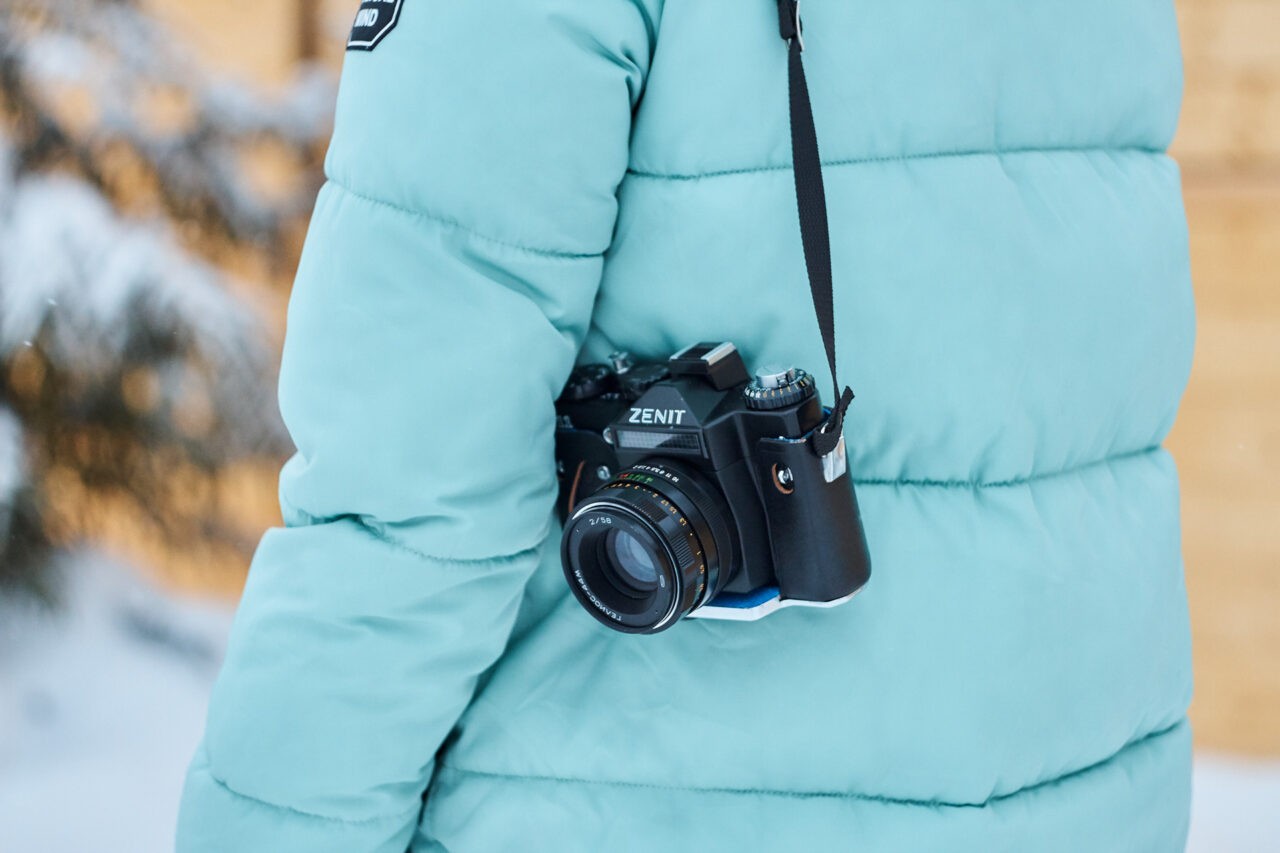 It is installed through the M42 - Canon EF adapter, you can read about the adapters here. Adapters without chips, from Helios 44m-6 to Canon EF are cheap. In general, you just need to buy an adapter with or without focus confirmation, and the lens is ready for use.

Helios of the Mkh-X series

Helios of older modifications have improved optical characteristics, slightly more resistant to back light. Lenses with multilayer coating slightly exceed the cost of Helios-44M-6 and are quite common.