The Zenit-122 camera is the first of the serial Zenits with plastic body panels. 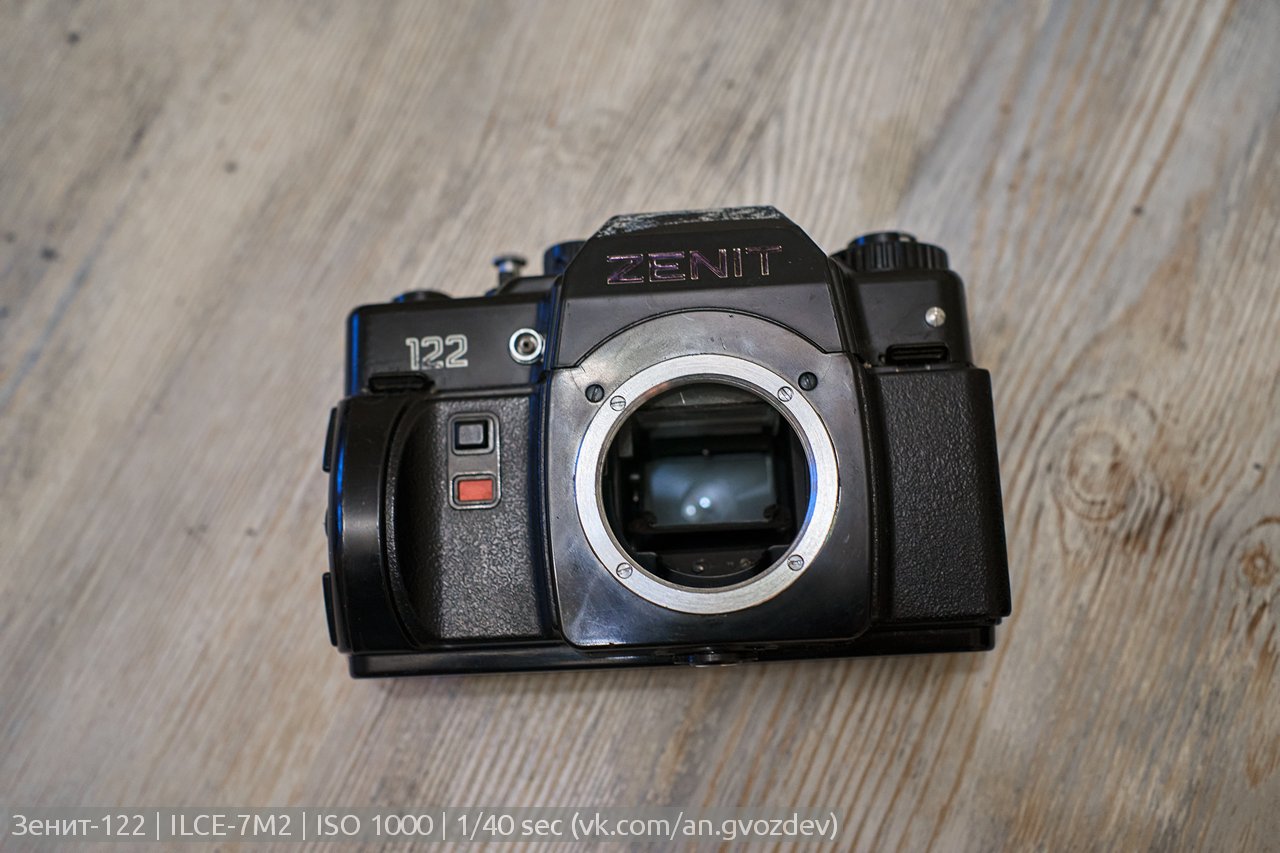 The base for most cameras with curtain shutters in the USSR was, in principle, the same. The production of the camera was launched at KMZ and Belomo. Subsequently, the Belarusian and Russian lines of these cameras were curtailed, not fitting into the market. On the basis of Zenit-122 Belomo, the Zenit-15M, Zenit-130, and Zenit-21XS cameras were developed. At KMZ, the continuation of the lineup was presented by Zenit-212k, Zenit-312m, Zenit-412DX, Zenit-412LS. 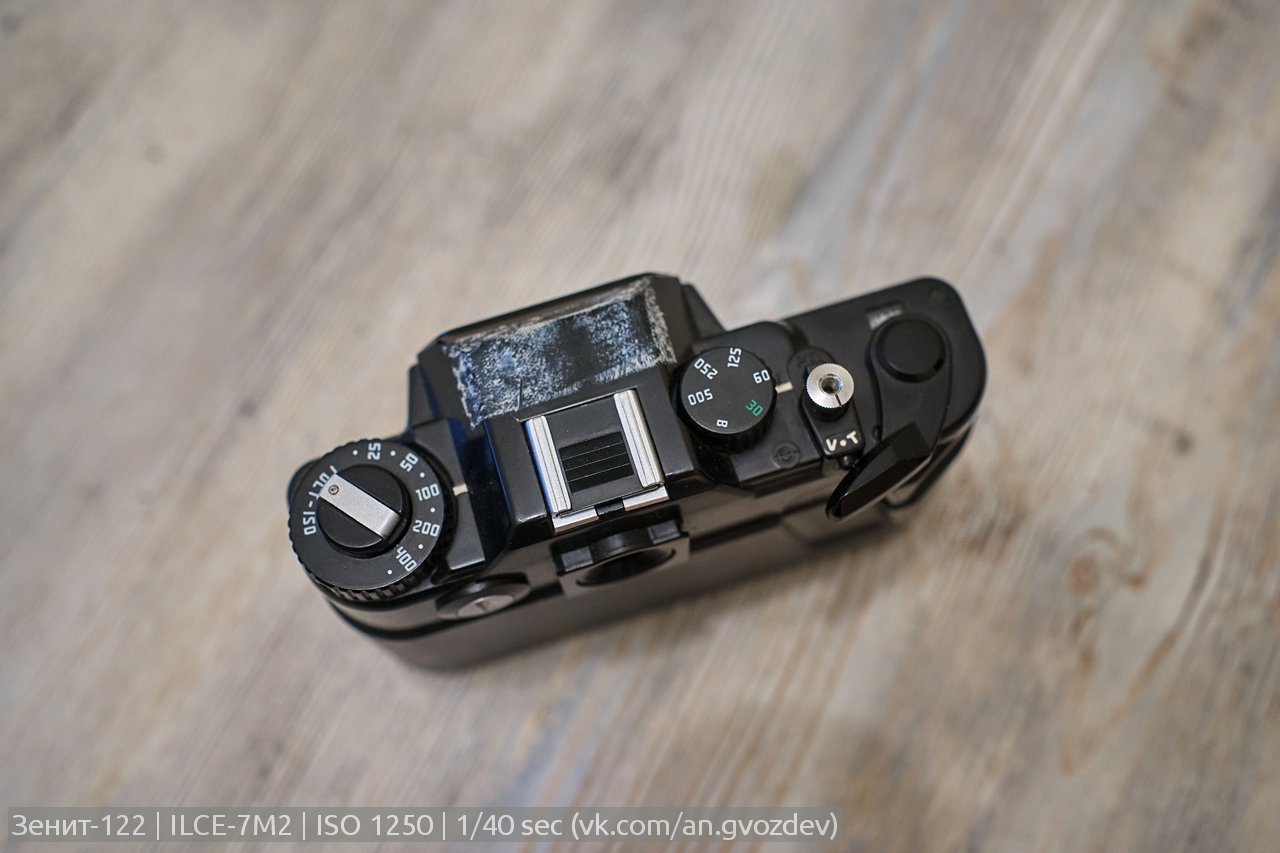 Zenit-122 is made on the basis of the Zorkiy shutter, with a plastic body and partial replacement of mechanics with plastic. Instead of lining with leatherette, plastic invoicing is used.

On the front panel of the Zenit-122 there is an indicator and a button for the release delay mechanism, a lens connector, an output for connecting flash lamps. On the grip under the right hand - self-timer cocking (plastic wheel in the handle).

Zenit-122 does not creak even in operation, despite the large gaps in the joints of the body panels. However, the same cannot be said for the hinged lid. It has a solid backlash and creaks when you squeeze the camera. Despite the fact that the review contains photos of a not very fresh camera, even on the new one you can see the free movement of the lid. In principle, without a wardrobe trunk, it is more convenient than Zeniths with a metal case. All due to the grip under the right hand and a notch for the thumb on the back of the camera. This Zenith can be held with one hand and not be afraid that it will slip out at the wrong moment. 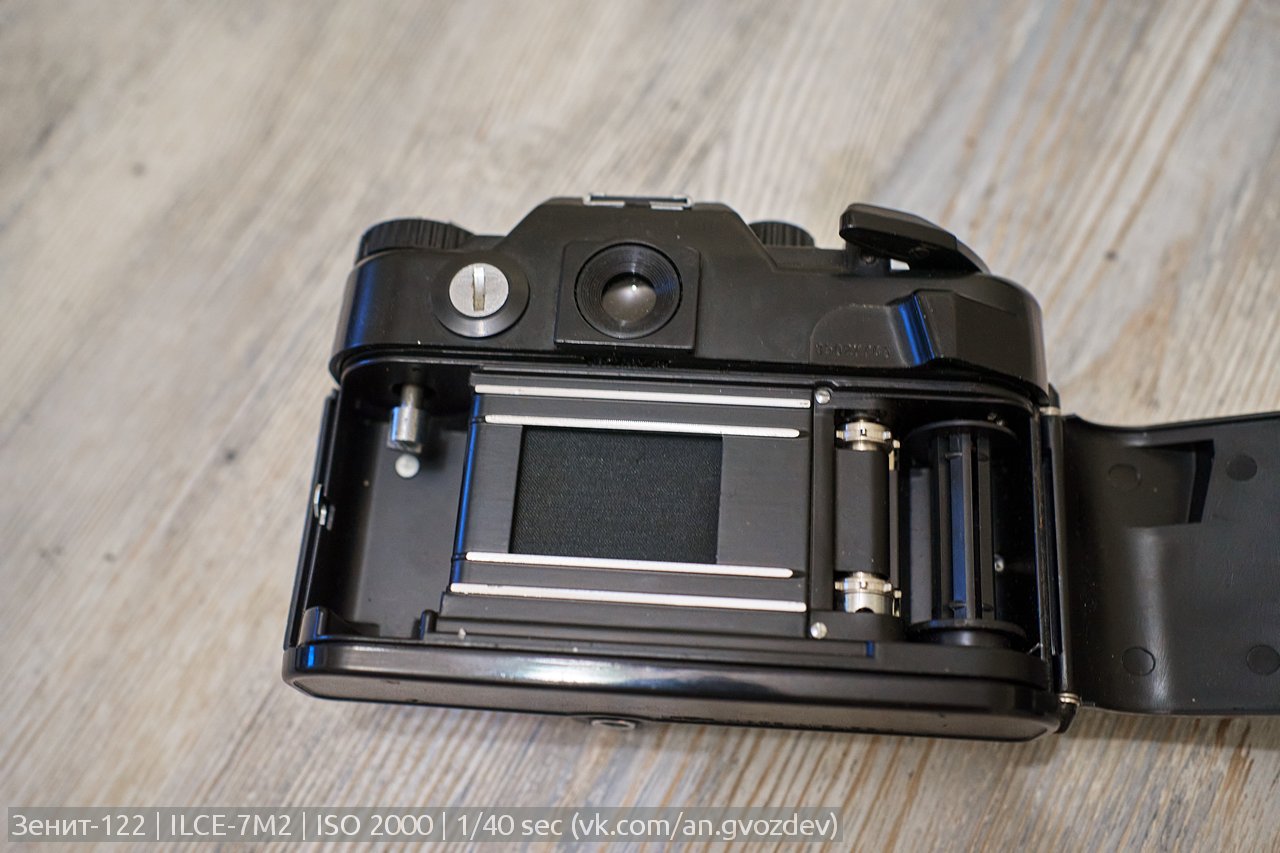 Exposure control in Zenit-122 is presented

On the Zenith-122, aperture control is not performed by the camera itself. You must manually set the values ​​on the lens. On lenses with an aperture drive, the aperture will close to the set value when the shutter button is pressed halfway. Exposure meter zenith-122 has no electrical connection with the lens, so it is possible to use early lenses with a preset aperture.

The viewfinder is a pentaprism, the displayed area according to the classics covers only 65% ​​of the frame area. Often, after developing frames from Zenith, one could notice extra details in the frame on the prints. The viewfinder is bright, focusing is made on frosted glass with a microraster and focusing wedges. When the exposure meter zenith-122 is activated, exposure will be measured with LED indication in the viewfinder.

The shutter of the Zenith-122 is made of fabric, rubberized, focal plane. Shutter curtains are not the most reliable, but relatively simple option. The shutter is equipped with a limited number of delays; there is no slow-motion slower. The longest shutter speed is 1/30 second (“B” is not taken into account). Exposures are set with cocked and uncocked shutter.

You should be careful when using a camera with a curtain shutter - keep the lens covered with a cap, otherwise the curtains may burn out in the sun.

The shutter cocking is coupled with the film advancing and occurs with a certain effort. The release is hard, the cocking trigger has no deceleration, and knocks on the camera body so that the "click" is disgusting after the first cocking of the shutter. When descending, the mirror breaks off, then also falls back sharply. The camera is lighter than its metal predecessors, therefore, when shooting at long exposures, you need to control your hands so as not to get blur due to shake.

"Shoe" in Zenit-122 has electrical contact. The body has an FP-sync connector for external flash lamps. Electronic flashes can be shoe mounted and fired manually. The sync contact works mechanically.

Exposure meter for the objective, based on a photoresistor, powered by 2x batteries type SC-32 1,55V (elements AG13 can be used). Unlike early selenium photocells, TTL metering photoresistor does not age so quickly, and exposure meters in cameras are generally operational today. The metering mode is the only one - over the entire area of ​​the viewfinder frame (65%).

The Zenit-122 light meter is coupled with the shutter speed dial, reacts to the diaphragm adjustment, to the change in the parameters of the photosensitivity dial.

The rewind of the film is of a roulette type, the rewind knob is retracted into the camera body. Frame counter - manual, auto-reset when the cover is opened. The film is loaded under the rear opening cover.

The cover lock is located in such a way that it does not need to be controlled while operating the camera. It works if you pull the winding handle up to the end.

What kind of film is needed for a Zenit camera?

Any 135 type (35mm) film in standard spools is suitable for Zenith cameras. You can use both black and white and color, you can wind the film yourself. A budget hobbyist color film from Fujifilm or Kodak, black and white Tasma, works well. ISO 400 films are suitable for low light conditions, while ISO 200 films are better for shooting outdoors in clear or slightly cloudy weather.

How to load film into the Zenit-122 camera

How to remove the film from the Zenit-122 camera

Press the button next to the shutter button
Unfold the film rewind lever from the disc to the left
Start winding clockwise
When the tail of the film is free, the resistance on the lever will weaken
Pull the rewind lever up all the way
Open the lid
Get out the film

In the secondary market, cameras are not particularly valued; with a Zenitar-M2S lens, you can find prices from 500 to 1500 rubles.

It looks cheap, in operation it creates the impression of a "pumped-over soap dish". This is not the zenith that it was before. Plastic panels have joint gaps. The screws are large, they were not even tried to somehow hide or decorate in order to give the camera a more presentable look. Although, even an interesting appearance would not have saved the line of film photographic equipment of the USSR - at the time of the release of Zenit-122, the Japanese with might and main were stamping cameras with autofocus and electronic control of all parameters.