Helios 44M-4 is a large rework of Helios 44M 2/58. The alteration concerned the internal mechanisms - 44M-4 are much simpler arranged than 44M. Helios 44M-4 - standard lenses for Zenit cameras. For the most part, these lenses come without an auto-manual aperture mode switch, they can have multilayer coating, and they have the very predictability of the optics of the entire line.

The case is made of aluminum, the frame is engraved with the Latin type “Helios 44m-4 2/58”. Weight Helios 44m 4 about 270 grams. Helios-44M-4 a little later after the release was recalculated by P.A. Lapin and acquired multilayer coating, which improved light transmission and color rendering lens. 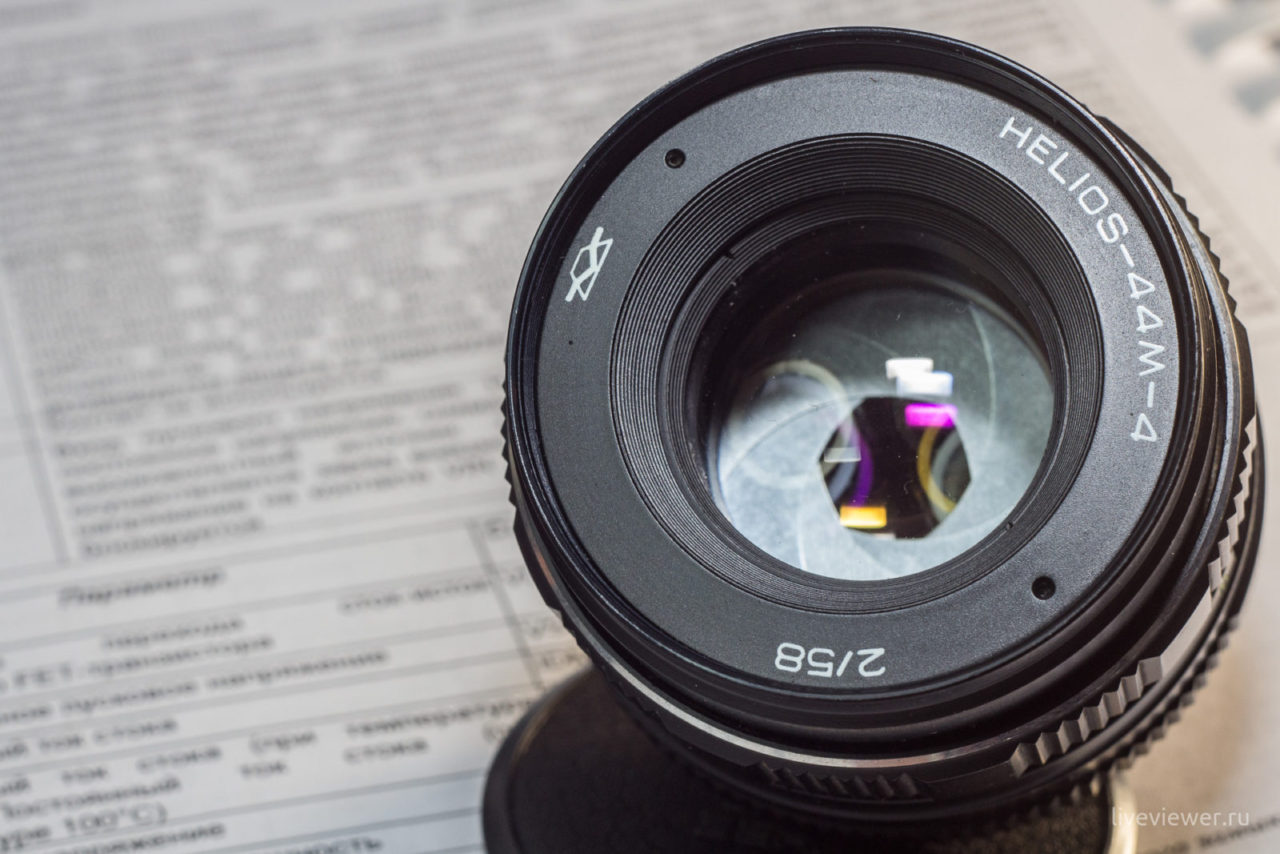 Looks like a diagram Zeiss Biotar 2 / 58mm, did not change all the time of production. 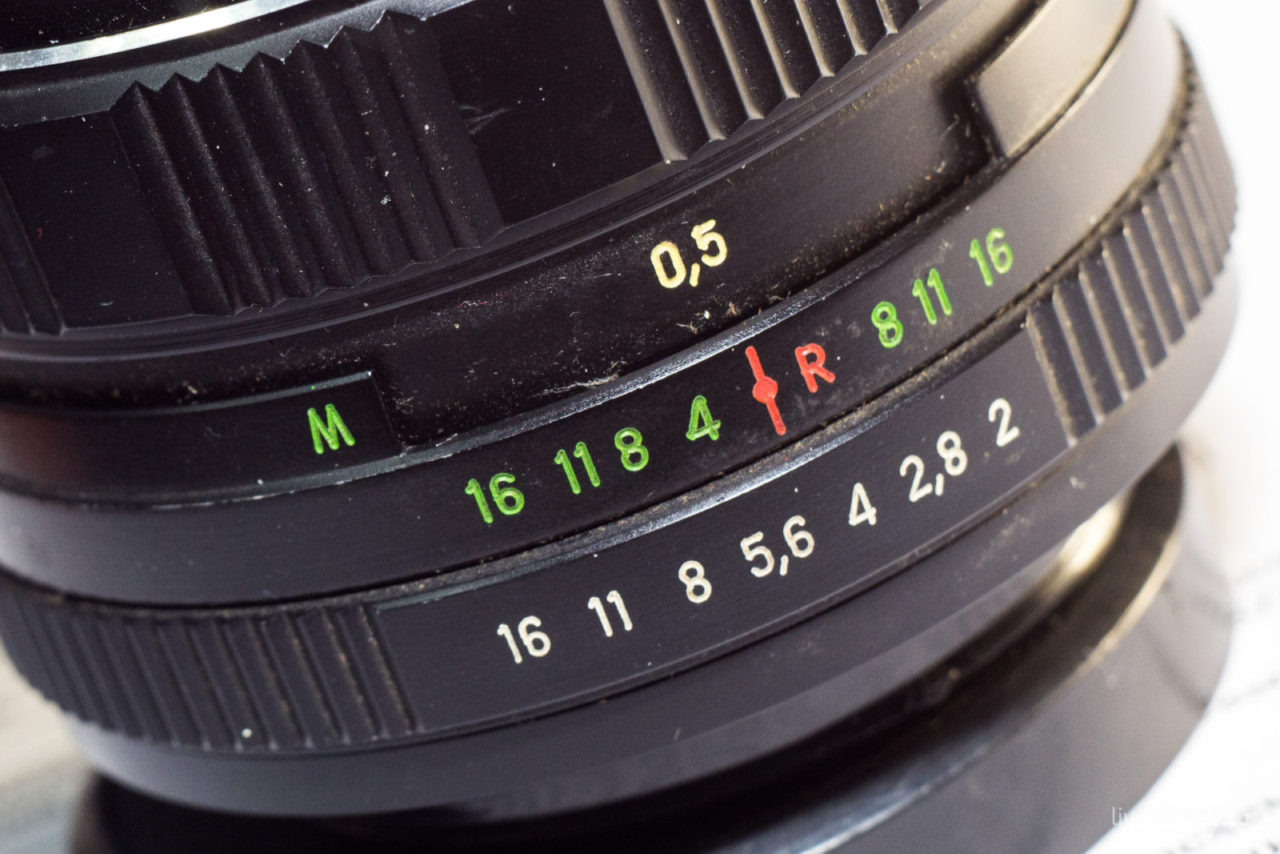 The protrusion of the front edge of the lens barrel at the maximum focusing distance is about 1,1 cm. Rotation is often tight, due to the type of Litol lubricant used at the factory, which loses its properties over time, and also thickens under the influence of low temperatures. The grease thickens over time so much that the lens has to be serviced. At the same time, cosmetically, the lens may look new. A timely serviced lens, as a rule, does not have any comments on the rotation of the rings. How to service your Helios - in this article. 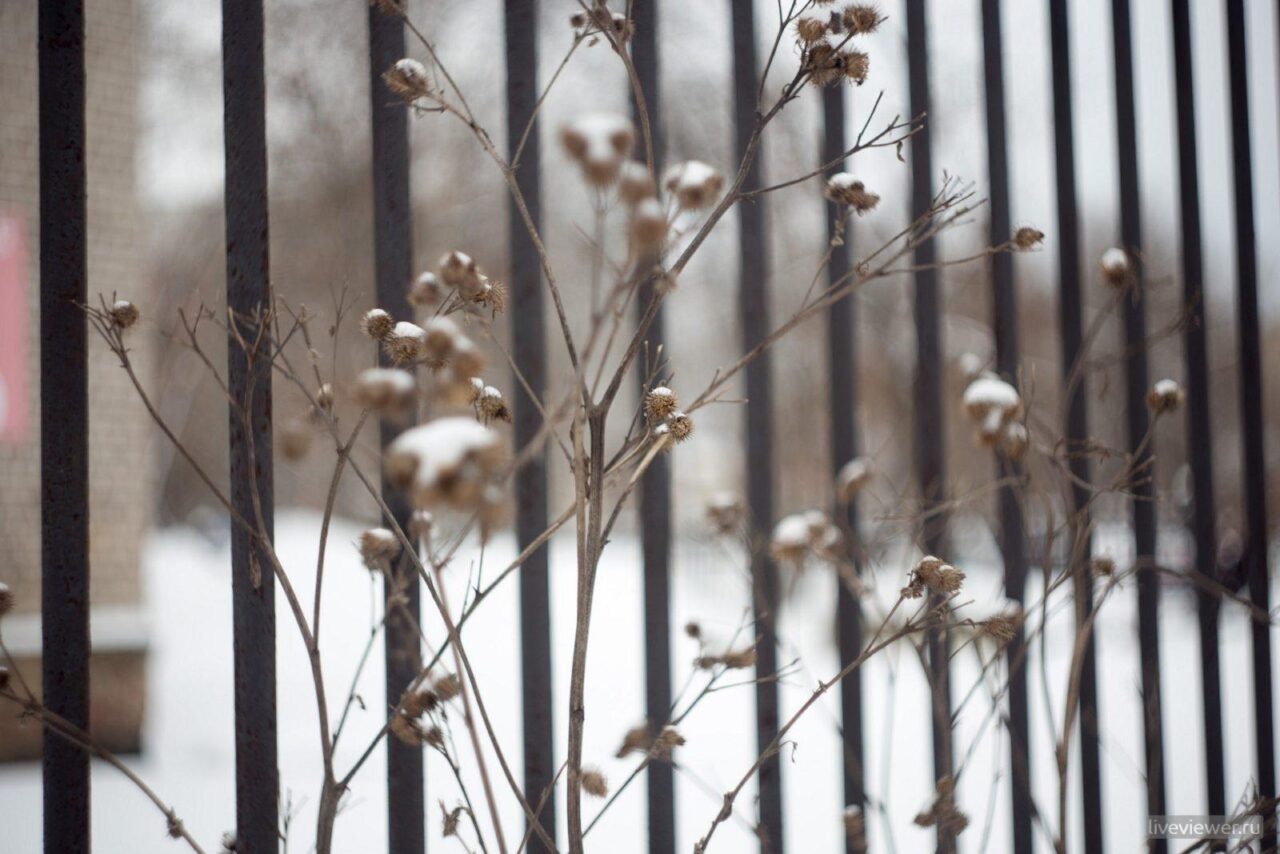 Due to the shallow depth of field, focusing on the eye, on cameras with a small viewfinder size, can have problems in the form of focusing misses. Better to use LiveView or adapter rings with focus confirmation chip.

Helios-44M-4 is equipped with an automatic diaphragm, there is no drive lock switch. Diaphragm actuator pin may be blocked by flange adapters if your system is not compatible with the design lens; or manually. I blocked with a match. Aperture adjustment on the body is carried out by a ring with a ratchet-fixer of values, and switching takes place with effort, even on a serviced lens. The relative aperture is adjustable from 1:2 on the open and up to 1:16 on the fully closed aperture.

The diaphragm of this model has six blades, pronounced nuts in hips appear already at f / 4. 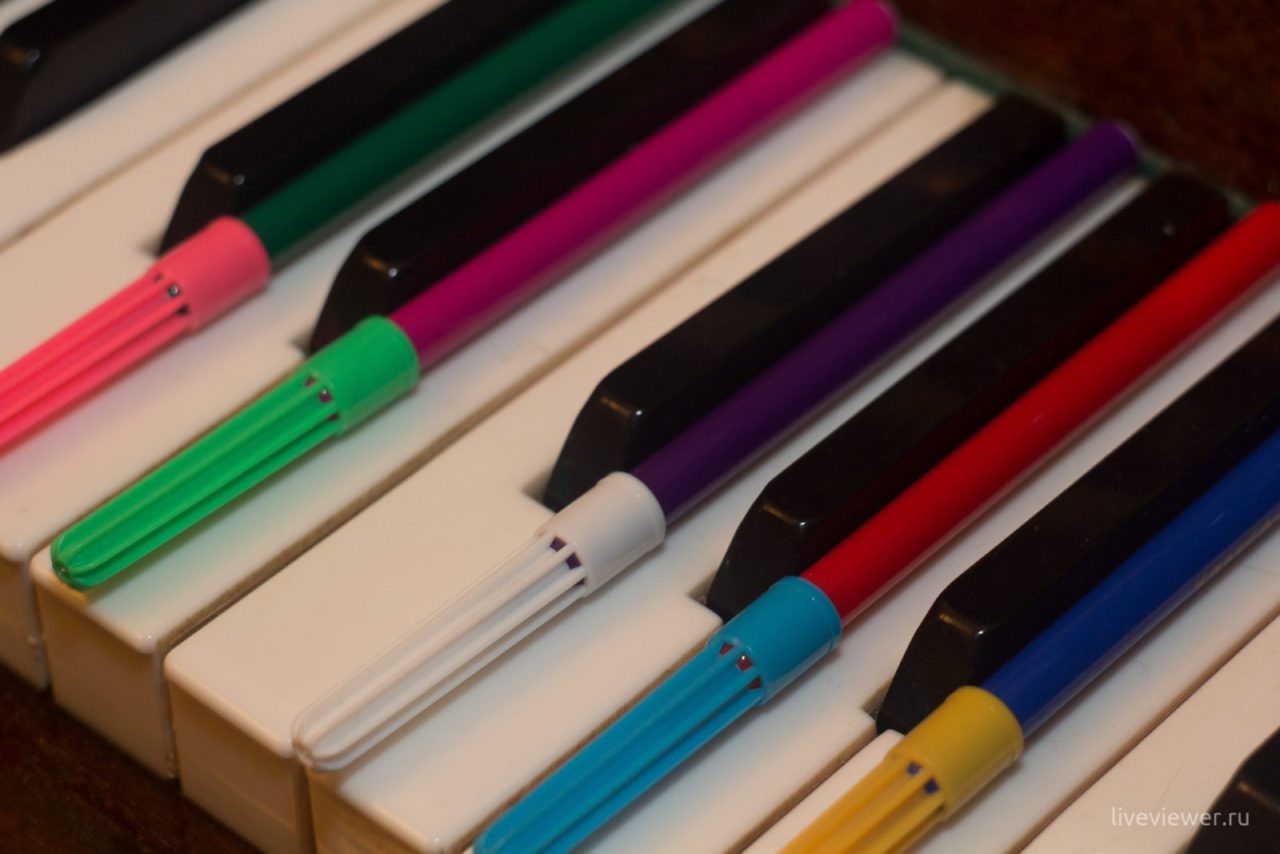 Helios-44M-4 may not have an aperture switch from manual to automatic modes, but the depth of field calculator is made on all lenses not in the form of an engraving on the body, but in the form of a cutout in it. The notch displays the focus distance, and the DOF values ​​are engraved below it.

In order for the metering to work correctly, you must have a camera with a diaphragm pusher. Modern digital cameras estimate the exposure level in the frame at an open aperture lens (in fact, old films too). When using any manual lenses at aperture other than open, you will have to enter exposure compensation. 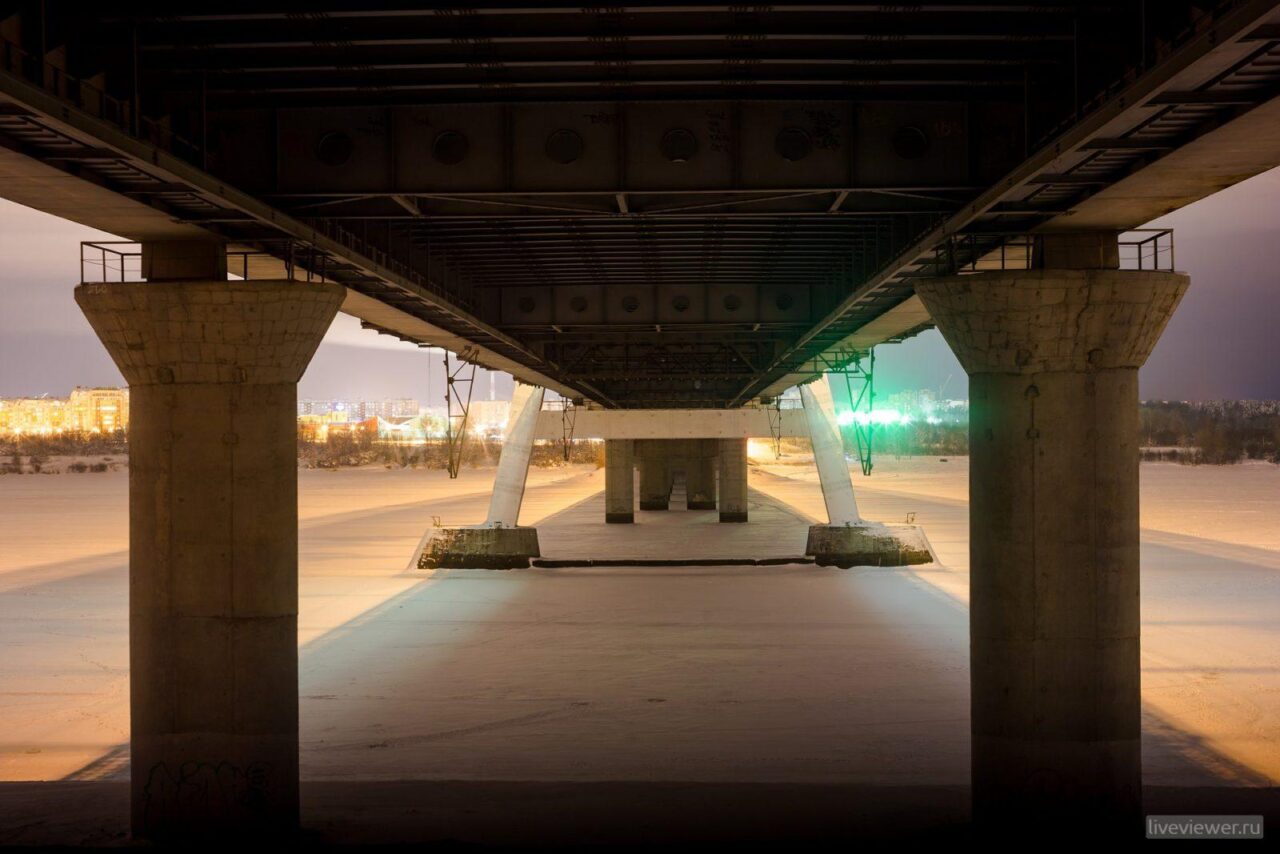 In the case of these Helios, I had to adjust the exposure (sometimes up to 1 stop) in the negative. That is, the camera by default "overexposed" the frame.

Shoot in RAW, especially if you're working with Helios for the first time.

Without removing the aperture ring lock, Helios-44M-4 will not be suitable for video shooting with sound and soft focus shifting, with on-the-fly control of the depth of field. Since the sharpness bar is thin, it is difficult to control sharpness when focusing through the optical viewfinder. Control is carried out by rotating the focusing ring and diaphragm as appropriate. 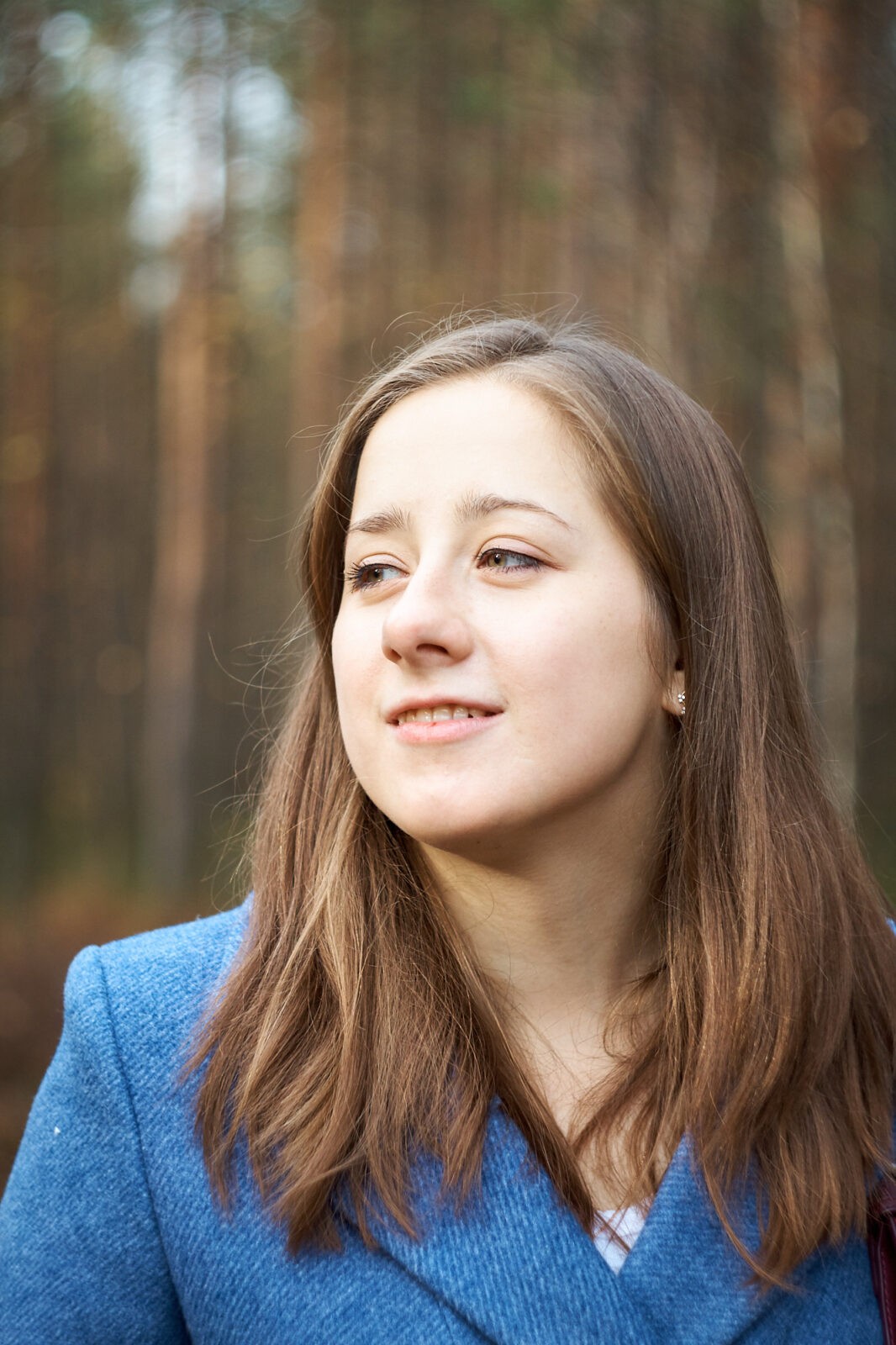 On an open aperture, there is a noticeable "twisting" in the out-of-focus area (hips), as well as color aberrations in contrasting transitions. Twisting the background is highly regarded by some users as it gives the photo an extra artistic touch. Helios 44M-4 turns the background noticeably stronger than Helios 44-2. Coma and distortion are well corrected in "Helios-44M-4". 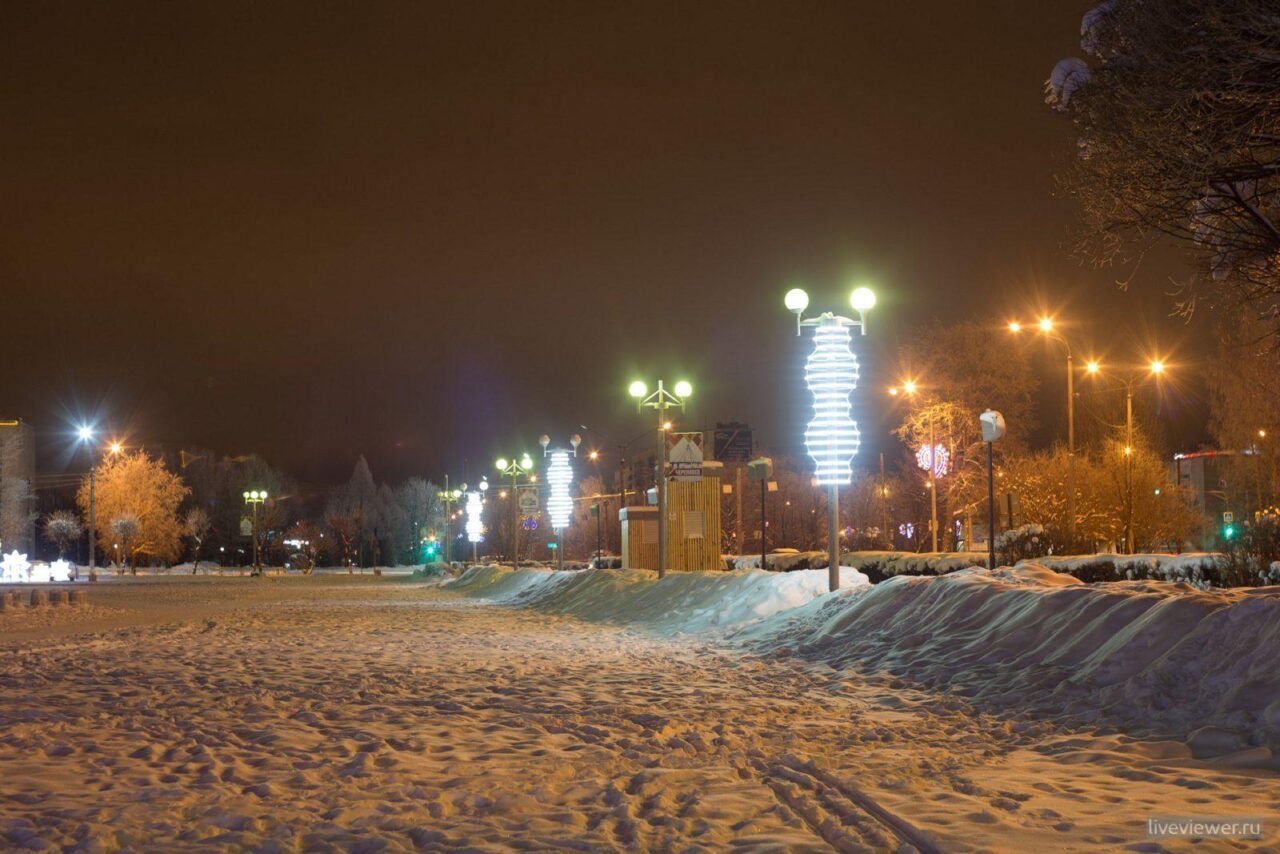 Sharpness in the center is appropriate, on par with modern lenses ... but falls towards the edges. This is not a bug, this is a feature (s). Not noticeable on the crop. 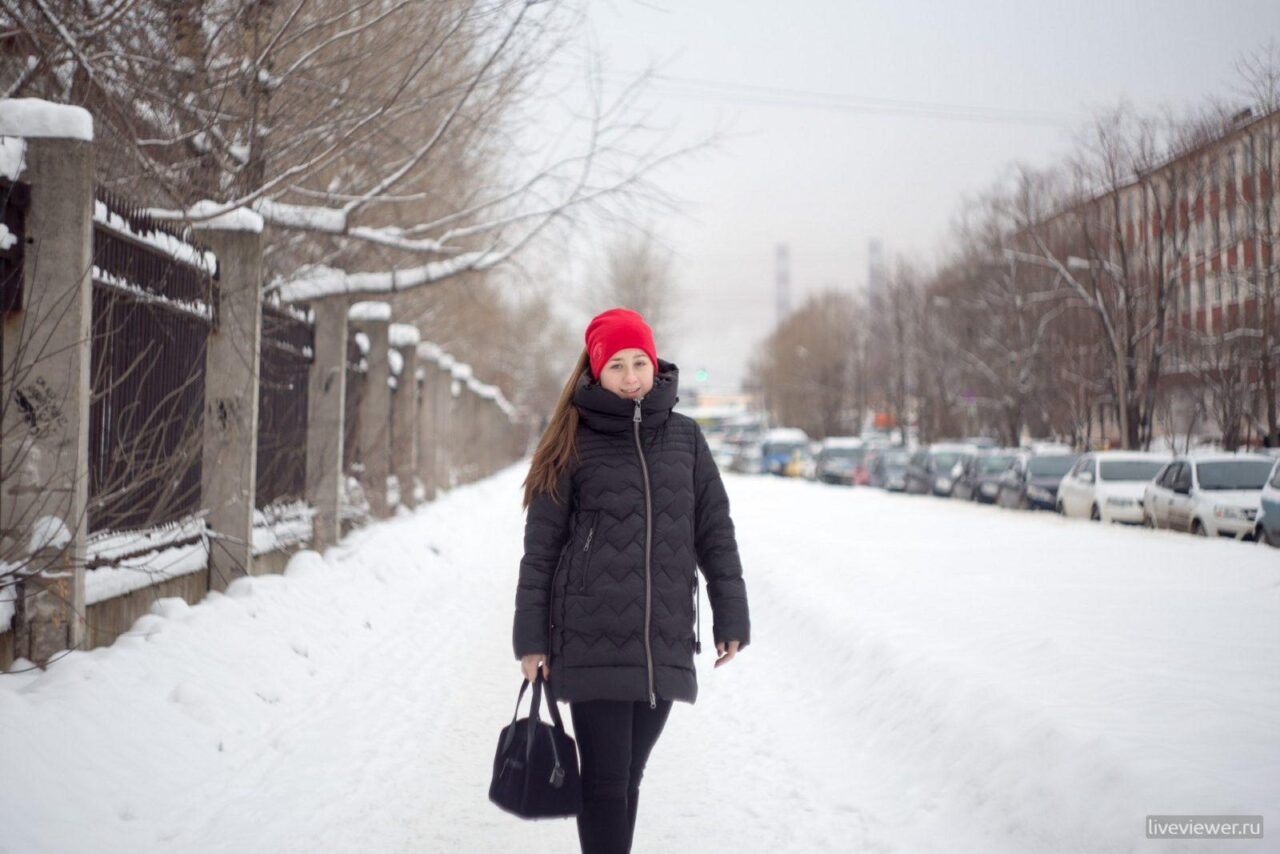 The contrast of the lens is at a normal level, however, it sags when exposed to bright light. The detailing also sags. Shooting without a lens hood (which cannot be found) in backlight and sidelight turns into a real hell.

Find out the weak points of your Helios in order to avoid obviously failing compositions.

Excellent sharpness. Different copies, depending on the year of manufacture, have different colors of the front lens coating. They are found with blue and yellow, purple. Lenses of the Helios-44M-4 series of late production were already with multi-coating. These lenses are marked "MC". 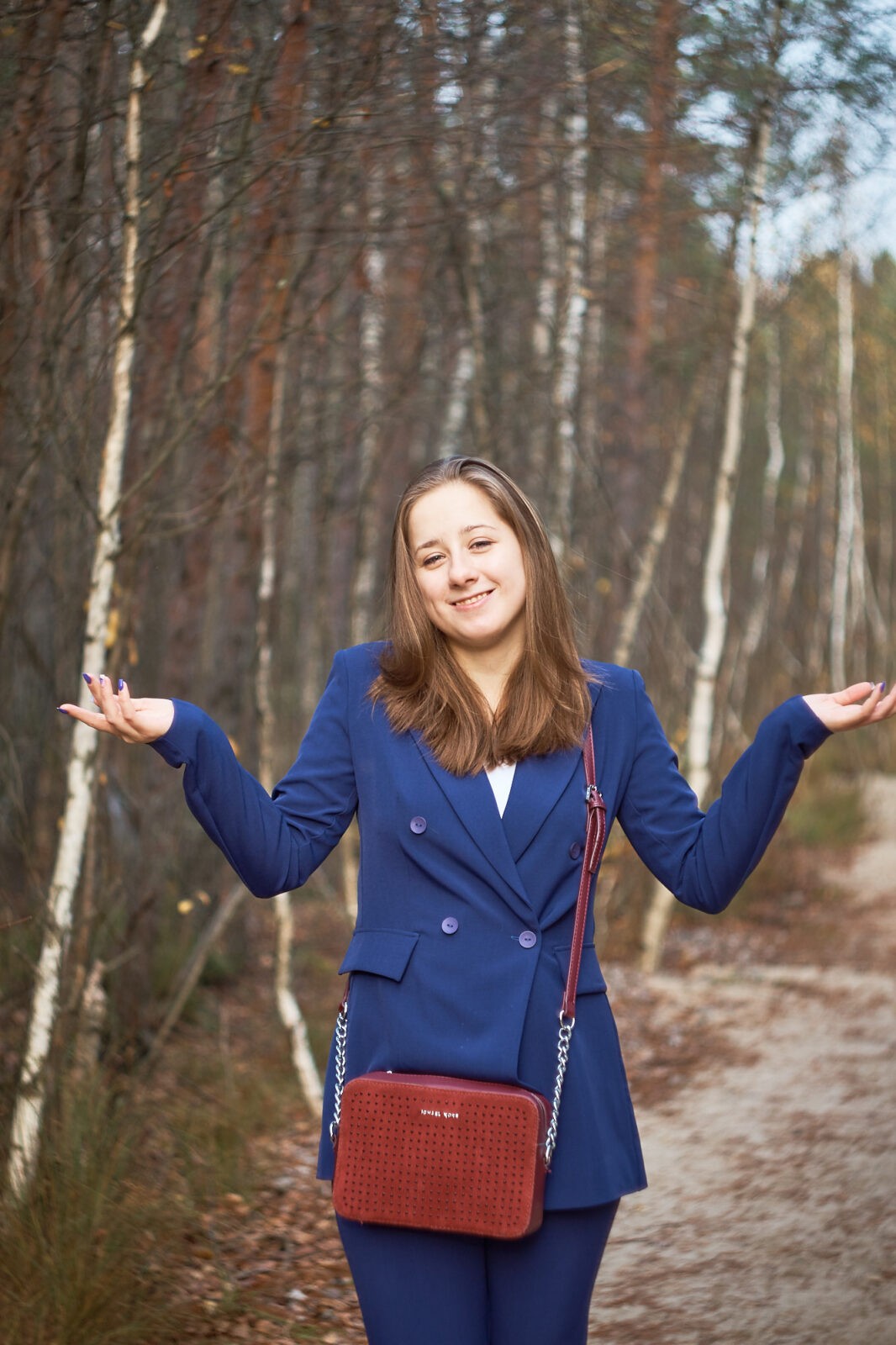 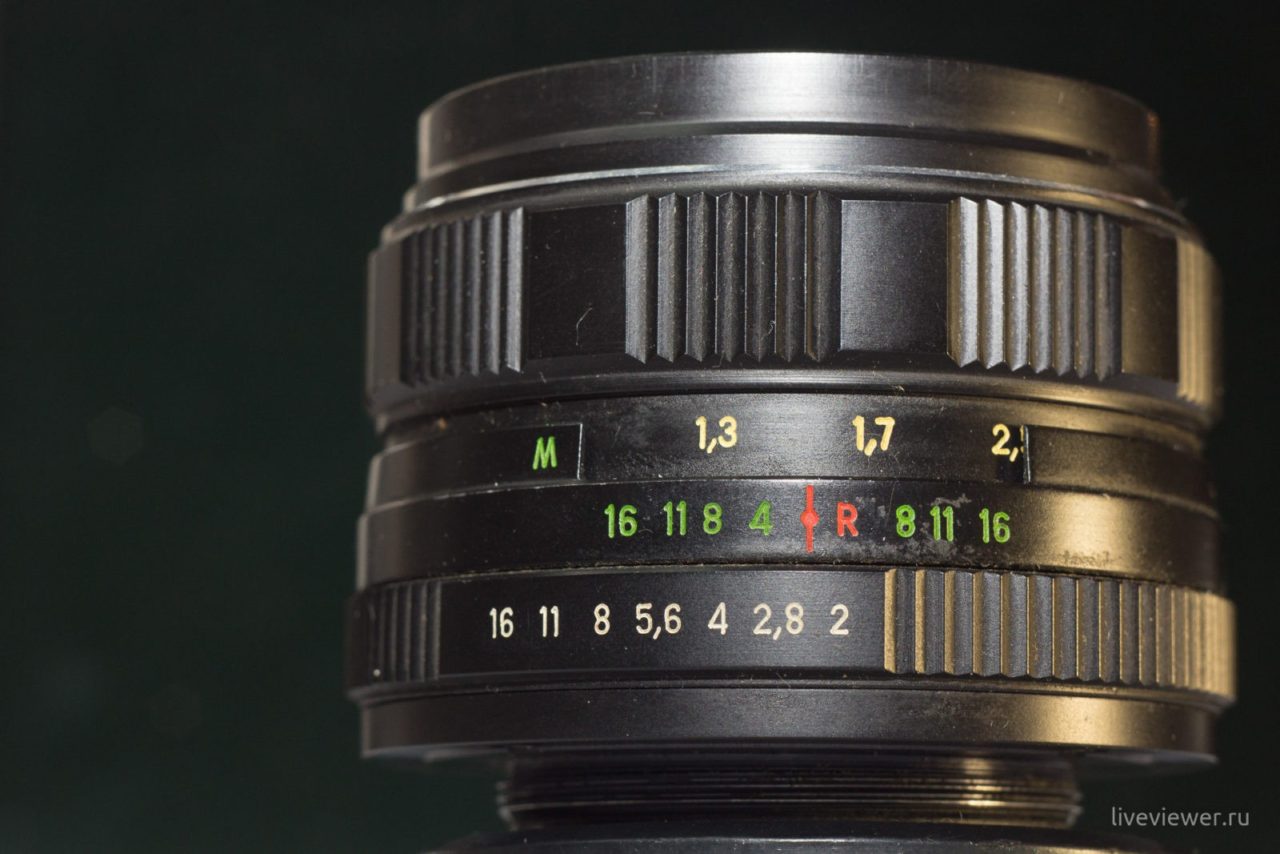 It is worth noting that even cosmetically killed specimens retain their basic qualities - it can be a pleasure to shoot on such glass.

To work on digital cameras, you will need an adapter from the M42x1. The easiest way is to install Helios 44m 4 through an adapter on Canon EOS with EF and EF-s mounts. When buying a lens, pay attention to whether your adapters are compatible with Helios 44M-4, whether they have a flange to block the aperture jumping mechanism.

When ordering, it should be borne in mind that cheap adapters of poor quality with a lens on bayonetf Nikon F significantly spoil the picture. Adapters without a lens reduce the maximum focusing range (due to the difference in focal lengths). Adapters with chips come across poor quality, exposure metering and confirmation of focus on some models of cameras may suffer from this.

On any mirrorless camera, Helios, like other M39 / M42 lenses, will work to its full potential through the appropriate adapter. Do not forget about the crop factor and the equivalent focal length.

In this video we used a Helios 44M-4 paired with a Canon 6d. Not all models are suitable for filming from the Helios 44 series. On this modification, when switching the diaphragm, clicks of the locking mechanism will be heard.

Helios 44M-4 does not show any exceptional qualities in comparison with older and younger "brothers", but on the contrary, it seems to support the party line, being a completely predictable model glass. It's not his strong point in shooting in difficult lighting conditions, but if you learn how to choose the right time, then the lens will delight you with stable quality, detail and sharpness.

If you take the lens under the old cameras, it should be borne in mind that Helios-44M-4 can be used on Zenit-ET, Zenit-12SD and others with an automatic diaphragm drive. Shooting with the Helios 44m-4 lens is very easy even with old cameras, the main thing is to have a little patience.

Best of all, the lens reveals its artistic potential on full-frame cameras. On cropped ones, the background twist will not be very noticeable, since the central part of the lens is working. I hope the Helios 44m-4 review helped you get to know this lens a little better.