Helios lenses on Nikon installation with examples of photos

It is not difficult to install Helios on Nikon! Despite the difference between the old Soviet and relatively new Nikon DSLRs, and in particular, the difference in focal lengths, Helios is the simplest portable lens that can be put on Nikon (bayonet Nikon F). For some optical schemes, the difference is critical - unfortunately, one cannot do without serious interventions and plumbing. But the optical system of Helios forgives even significant errors during porting, without loss in image quality. 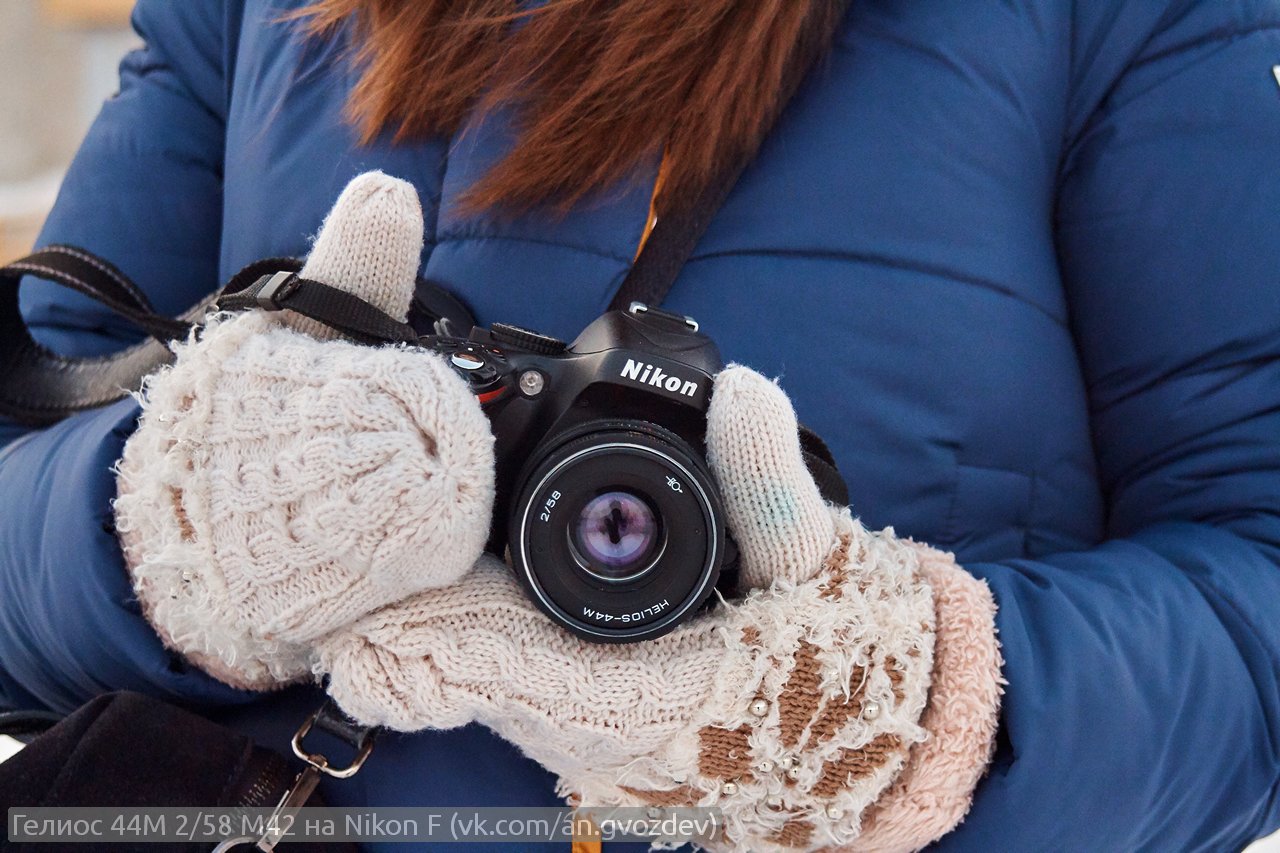 You can forget about installing rangefinder lenses on Nikon F SLRs. The difference in working distance is enormous. The difference of three millimeters of the flange distance between the M42x1 thread and the Nikon mount forces us to perform only a few manipulations to get the full functionality of the helios on Nikon F. 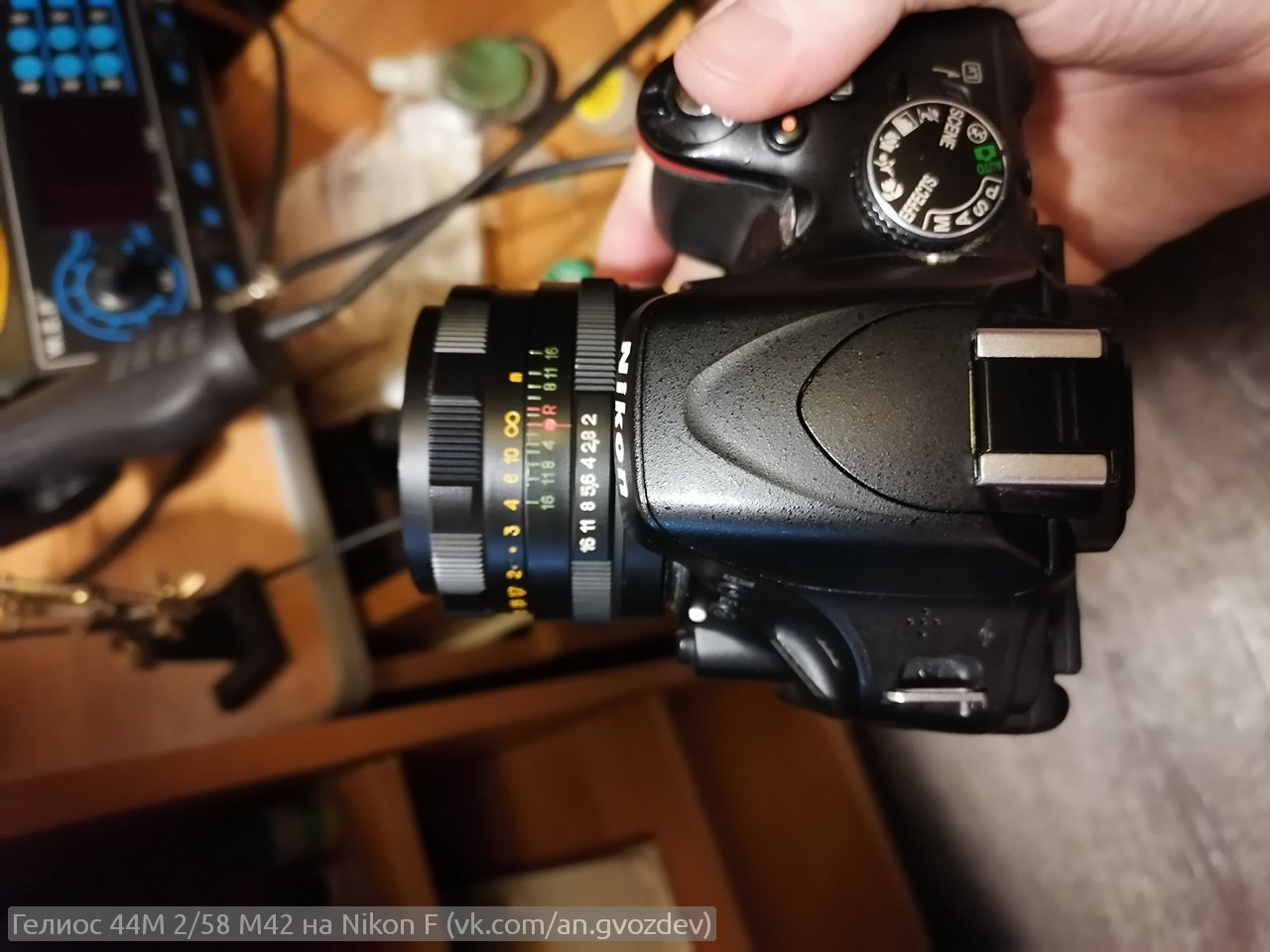 In particular, in the simplest cases, so to speak, "push the lenses". In general, the course of the Helios helicoid for installation on Nikon must be moved 1 mm forward from the standard place, and the rear lens gluing - 2 millimeters back. Any spacers can be used that are suitable for this purpose.

The spacer can be a piece of wire, or it can be a ring made of any material, which we clamp between the lenses and the helicoid. For example, plywood, plastic, or aluminum (which will be completely kosher). I put spacers with a thickness of 1 mm between the helicoid and the threaded part in which it is fixed. Otherwise, infinity will not be seen. If you are completely lazy, or there is no tool, then you can only move the rear lenses. There will be no infinity anyway, but the focusing distance for knee-deep portraits will be sufficient. There is also a nuance here. I prefer the 44M and 44M-4 series because they have the rear part of the helicoid Dismountable. The rear lenses are screwed into the body of the helicoid and we use this so as not to tighten them by 2 mm. In the case of the more recent 44M-6, or 44M-7, non-separable helicoids are often encountered. And I really don't want to be engaged in global peeling. In general, after all the manipulations, we wind the helios on adapter m42-nikon f, and enjoy a working lens with good sharpness, color, and detail. 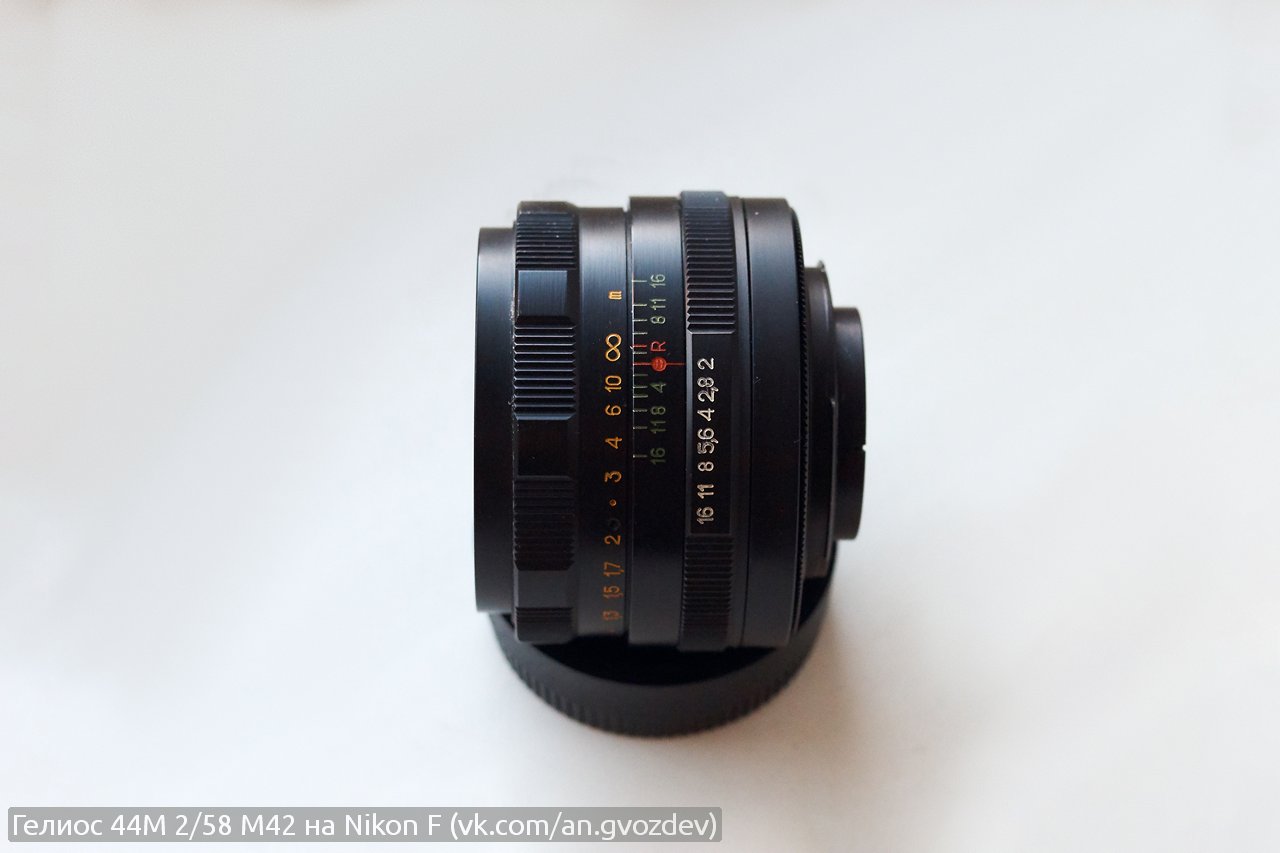 Limitations and inconveniences of using Helios on Nikon

Compared to a lens without intervention, the rear lens of the Helios converted for Nikon sticks out very strongly. 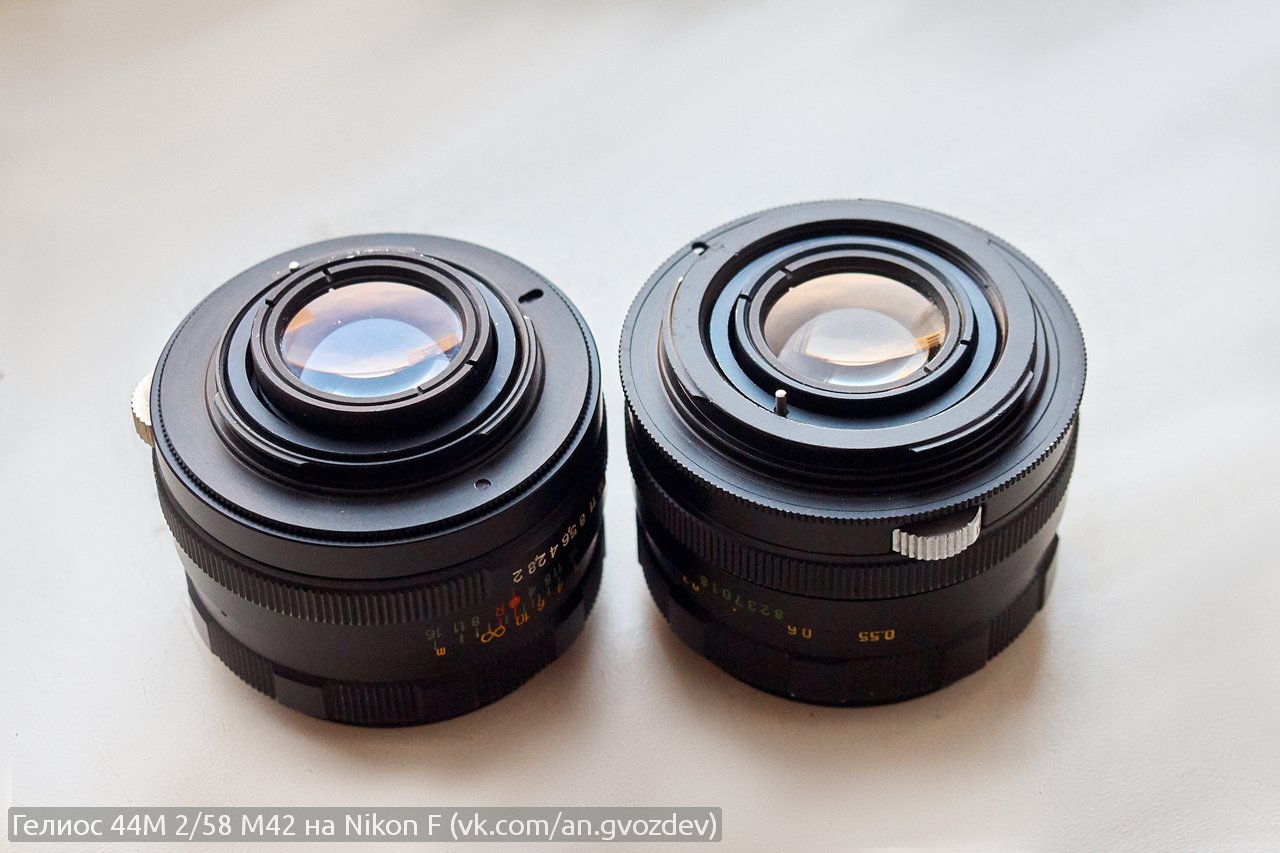 If we have a full frame Nikon, its mirror will most likely cling to the rear lens rim after rework. To eliminate this drawback, it (the frame) must be grinded off to the maximum possible distance.

On Nikon cameras of younger models, using adapters without a chip, Helios will not be detected and you will have to shoot in manual mode. Aperture and focusing and so manual, but still have to learn how to expose to the eye the shutter speed and iso of the camera. In this regard, Canon cameras are much easier to use old optics from Zenits. There is a separate article about this “Helios on Canon". When using Helios-44M on Nikon D5100, I was quite disappointed with this fact. However, the Nikon D5100 fared much better with the Helios video. In this mode, the camera at least could automatically set the ISO.

Where to buy an adapter for Helios?

I recommend buying the adapter directly from trusted sellers at ali, for example. If you are from Crimea or other territories where it is not possible to order from Ali, then use the offers of sellers on sites such as Avito, Sack, etc. Sending adapters across the territory of the Russian Federation and to the Crimea usually does not cause problems even by Russian post. The article

you can find direct links for ordering adapters at ali, and also read about the compatibility of other systems with adapters.

will help you navigate the issue of installing Helios on Canon. Everything is much simpler there, as is the case with other mirrorless and mirror systems. 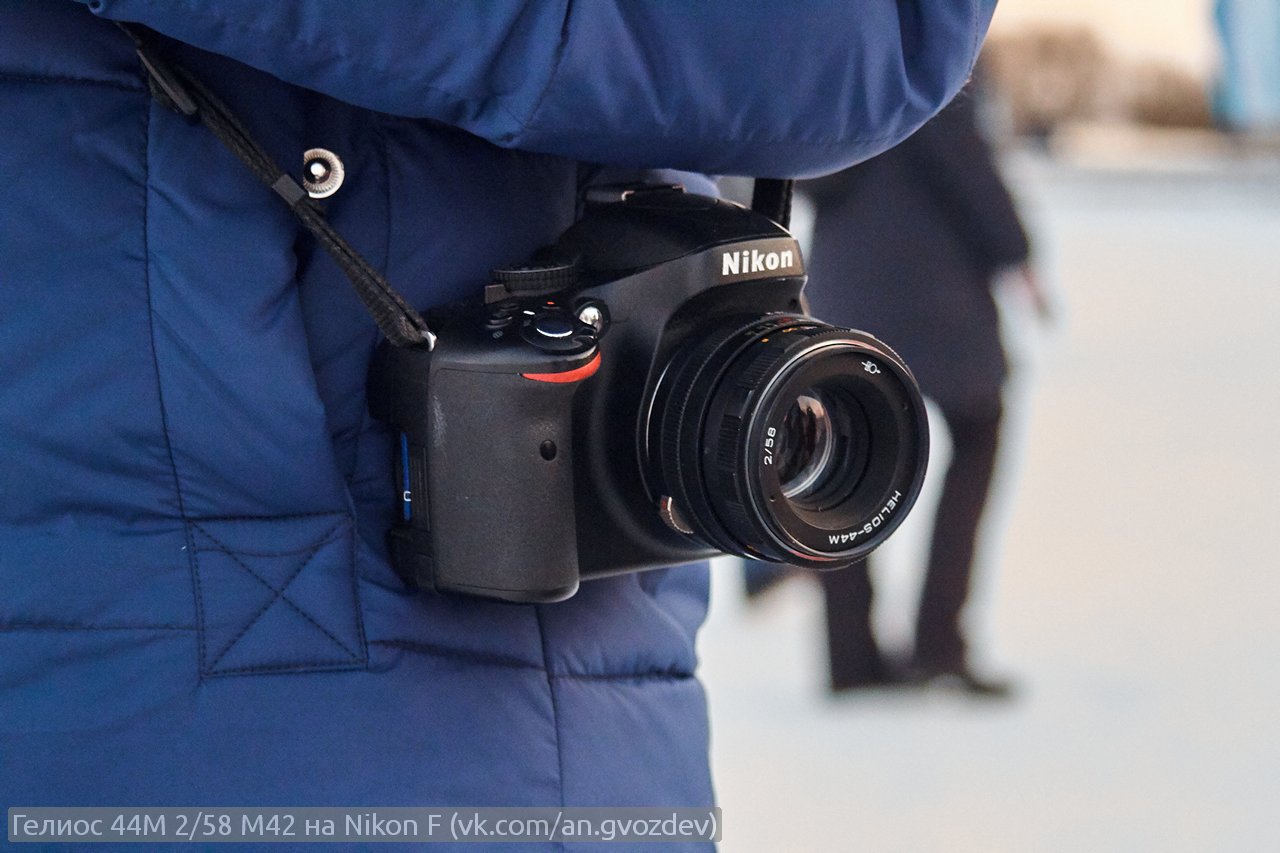 Unfortunately, the camera on which the bundle was tested did not have a shutter and was resurrected from oblivion. But he could record video. Therefore, freeze frames of video are used as examples of photos.

I have detailed reviews on working with Helios on Canon and Sony. Look, analyze. The reviews are backed up by comprehensive examples of photos and videos from Helios of various modifications installed on Canon EF and Sony. The lens is really worth the money!