The Hanimex Hanimar Auto "S" 135mm f/2.8 is a visually and tactilely pleasing Japanese glass lens (according to the body engraving) produced for Hanimex (Hannes Import and Export, Australia).

Hanimex - an analogue of the deceased "Euroshop" and "Shop on the sofa", as well as a company in Australia that has its own shopping center and product catalogs.

Of the lenses produced under this brand, many can be found under other names. The true manufacturer is worth looking for among the Japanese manufactories of that time. The information varies, and it seems to me that Cosina \ Tokina is more likely. But given that

similar to this Hanimex in design, font on the rim, then this is generally Chinon Auto.

But not the point. Over the hill, these lenses are called "plug for $ 10", which, as it were, hints to us about the attitude towards them in the market as a whole. But is it all so sad? I tested the Hanimex Hanimar Auto "S" 135mm f/2.8, and I will say that for an inexpensive XNUMX, the quality is not bad. The lens for the review was provided by Vladimir Ekimovsky, for which special thanks to him. 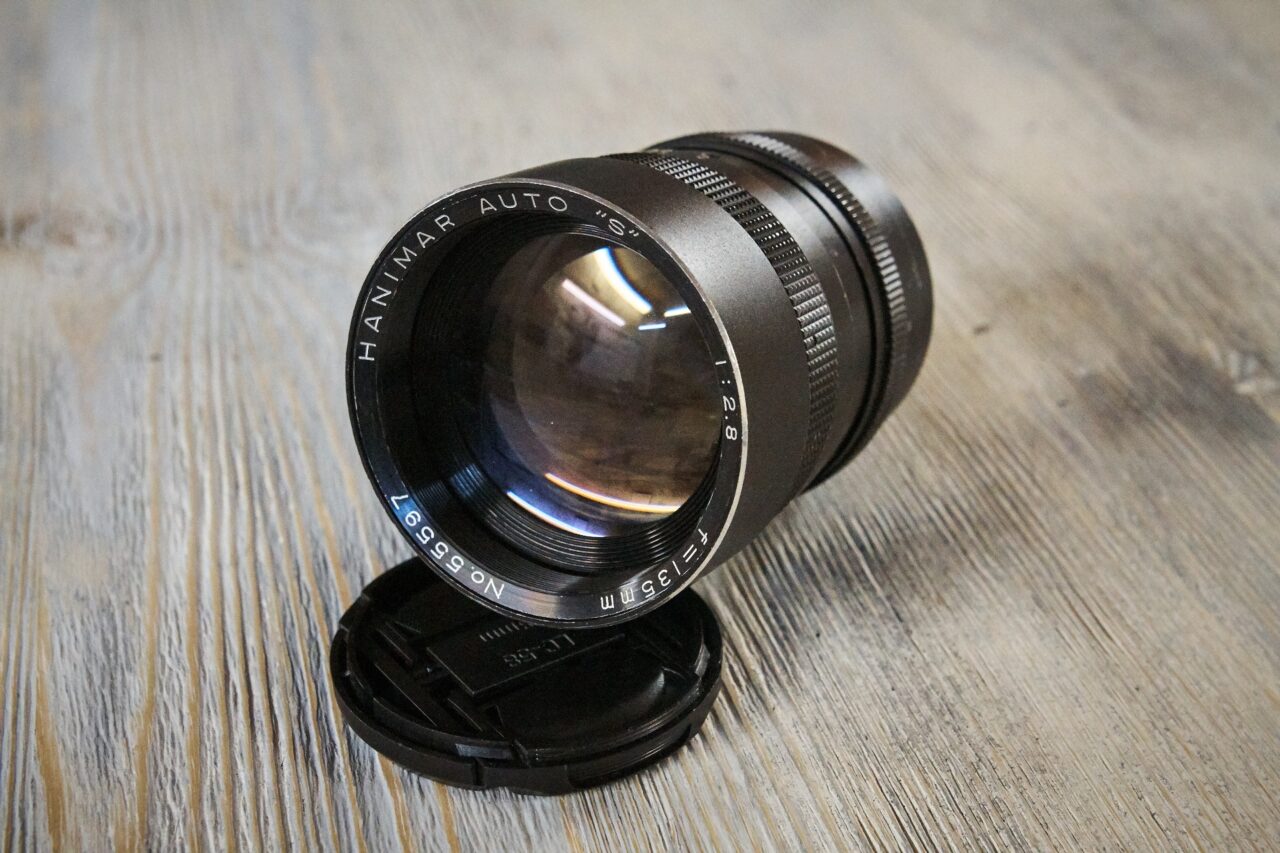 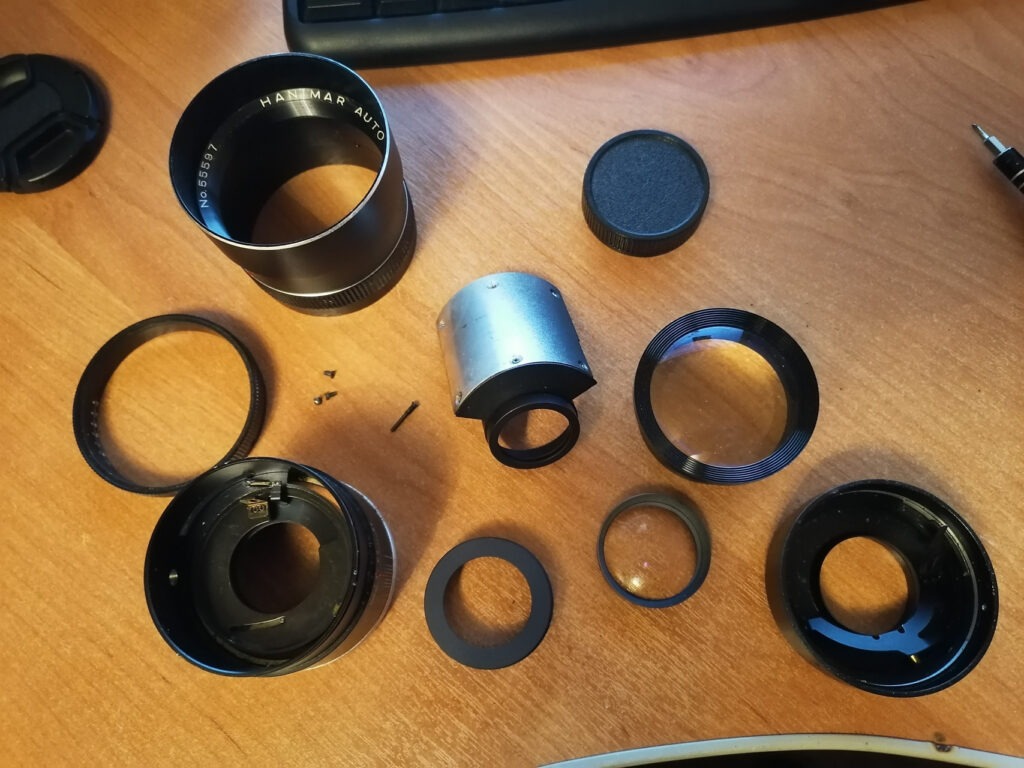 The Hanimex Hanimar Auto "S" scheme is somewhat reminiscent of the Sonnar 135 / 3.5, but lacking an average lens bonding. In general, the design is quite simple, and therefore ingenious. Front gluing, back gluing, between them there is a bridge and a corrective lens at the end. The glues sit on screws, on one plate inside the case, alignment after disassembly is made by moving the front gluing. 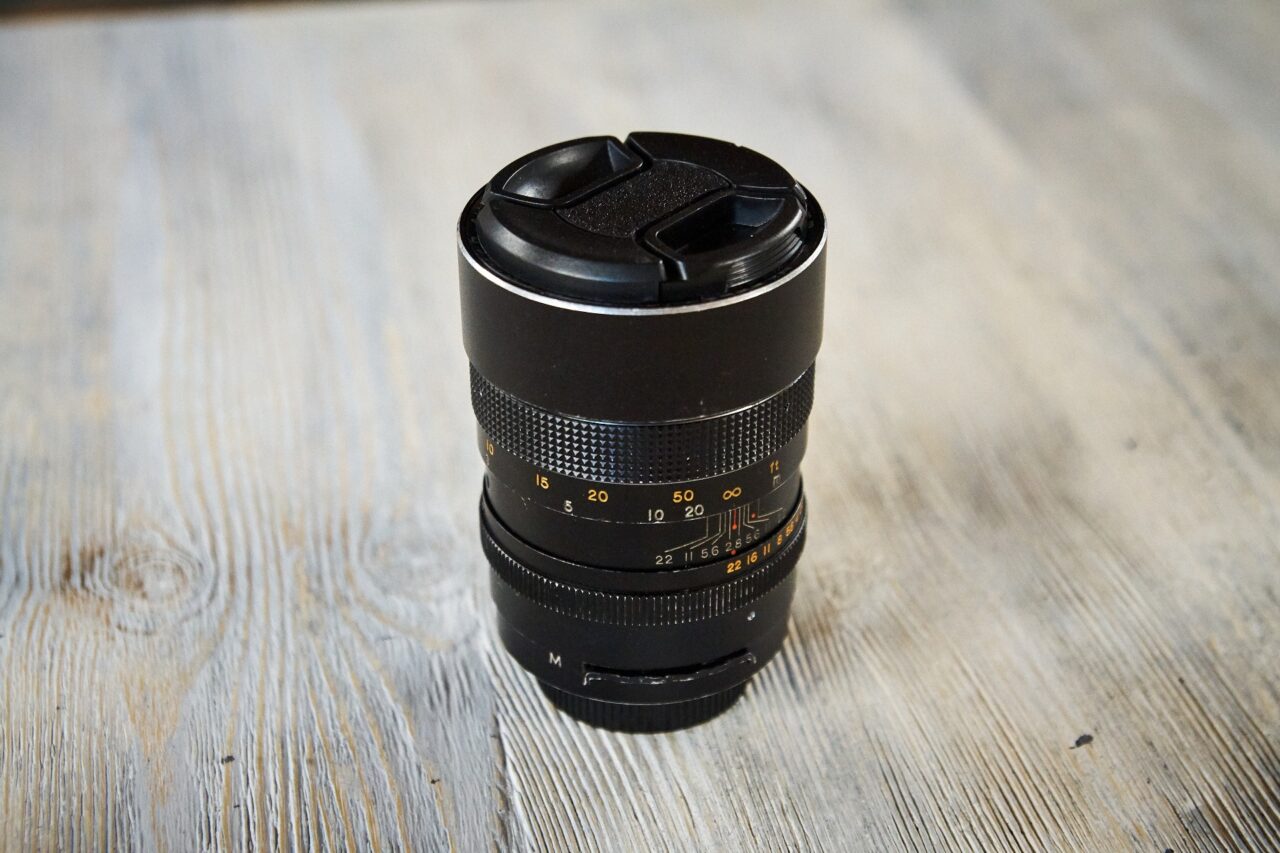 The first thing that attracts attention in this lens is its lightness. Helios-44M is slightly heavier than Hanimar Auto S, so it's unusual to hold such a light 135-ku in your hand. In comparison with Jupiter-37A and Sonnar 135 / 3.5, as written earlier, the scheme is similar, but the central lens unit is missing. Focusing is carried out by moving the entire lens group inside the housing lens... The front lens does not move around its axis. There is a retractable hood on the body. The case is aluminum, very thin. The lettering is engraved and filled with paint. The focus and diaphragm rings have ribbed knurling. The body is painted with matt paint. Sits well in the hand. Due to its simple design, the lens willingly lets dust into the body. 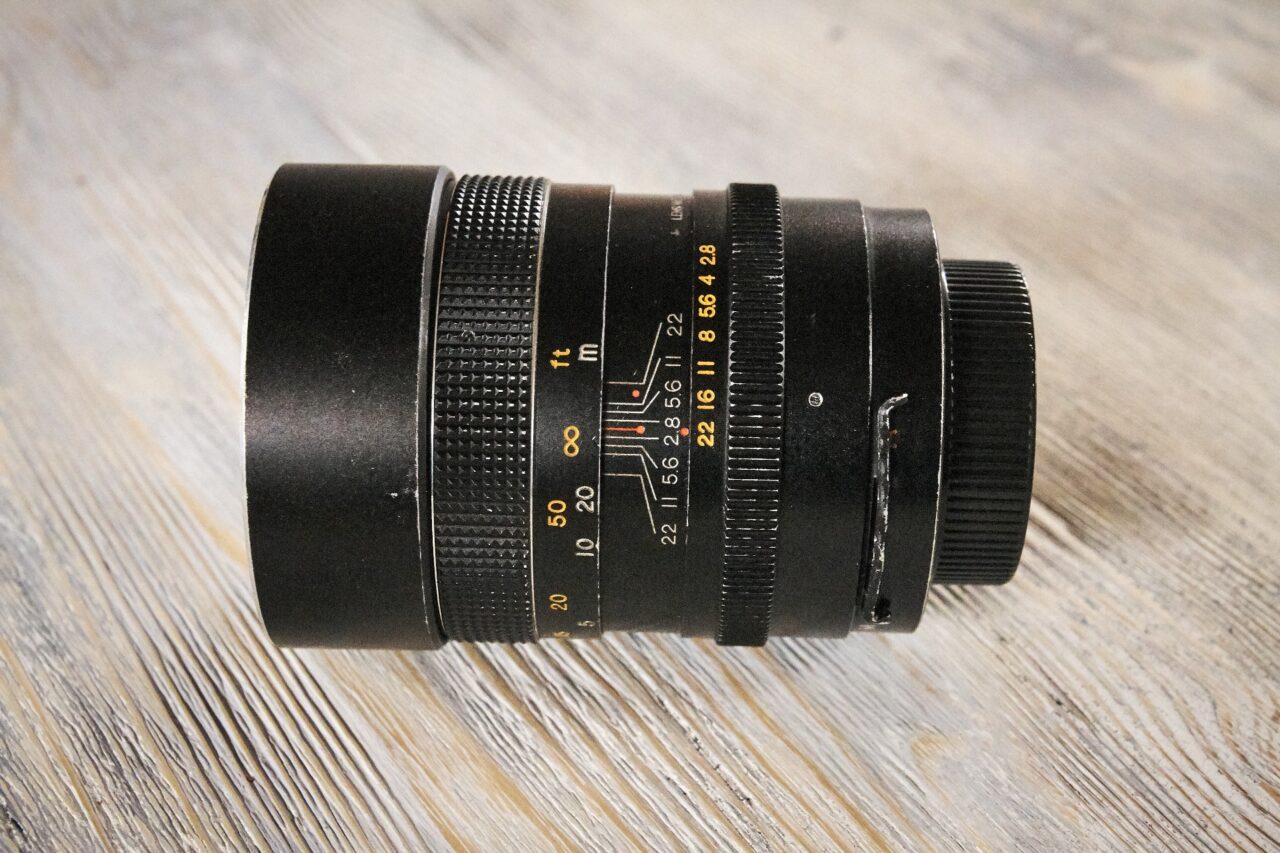 The focusing ring has a short stroke, rotating around 90 degrees. Focusing efficiency is not bad, however, aiming accuracy at open aperture suffers from this - when you try to hit the target, errors constantly occur. But then you get used to it, the smooth rotation of the ring helps. MDF 2 meters, infinity comes along the marks on the body from 20 meters, but in reality - meters after 10. The division of the distance scale itself is very conditional. But the lens is not deprived of a scale for calculating the sharpness. 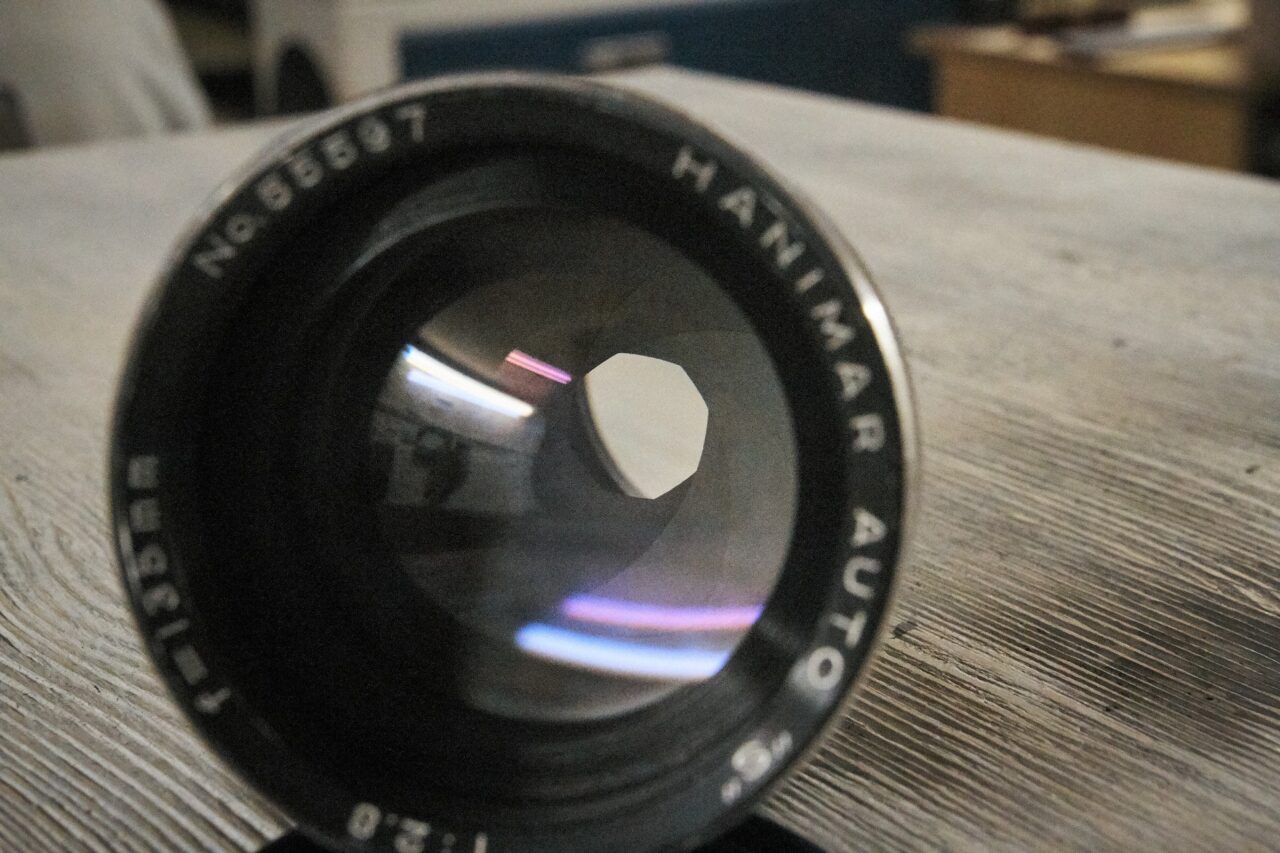 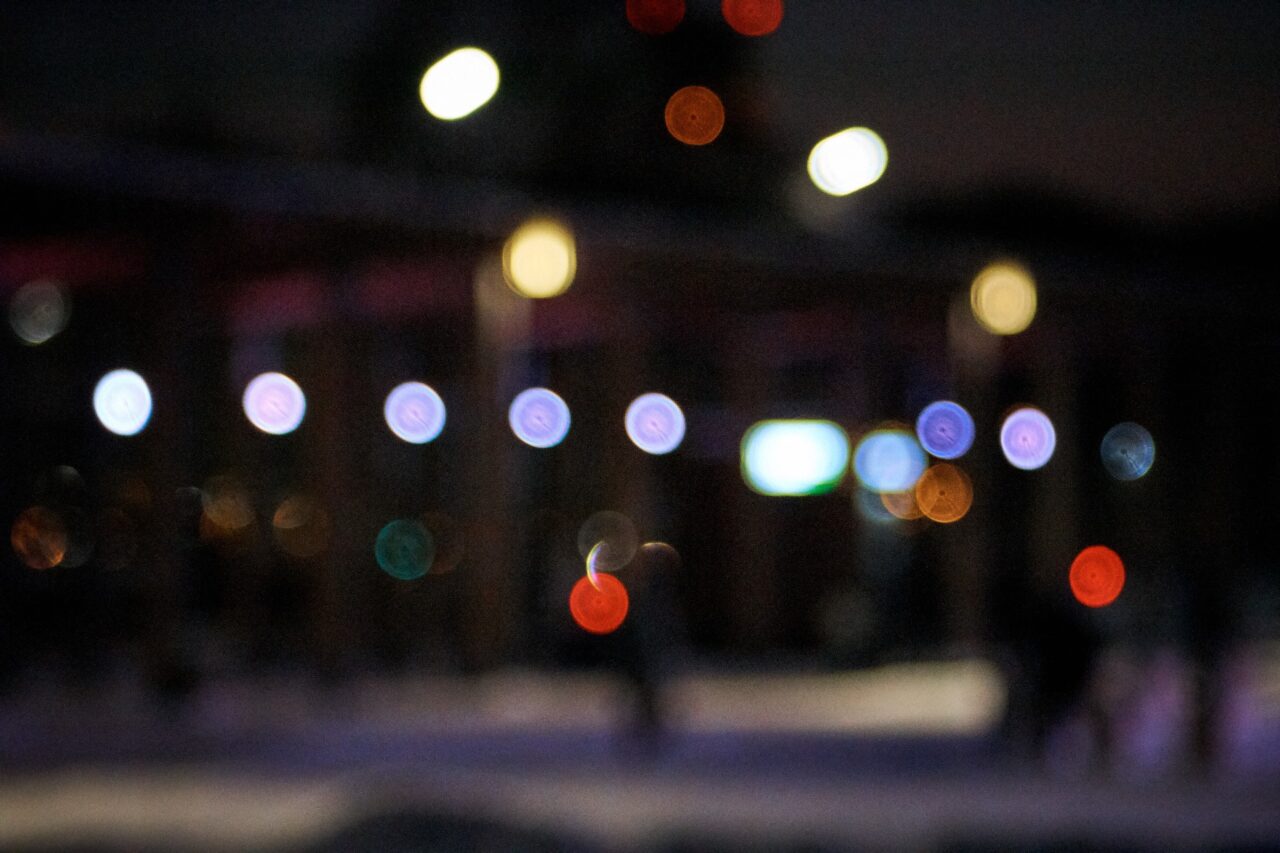 Switching the diaphragm meets a slight resistance from the latch, which almost silently allows switching both by covering it and vice versa. Maximum open diaphragm - working. And not quite the opposite, as can be found in some modern optics. What does it mean? This means that you can shoot at any value and there are no restrictions / nuances. The only caveat is that you need to accurately hit the object so that there is normal sharpness and color. 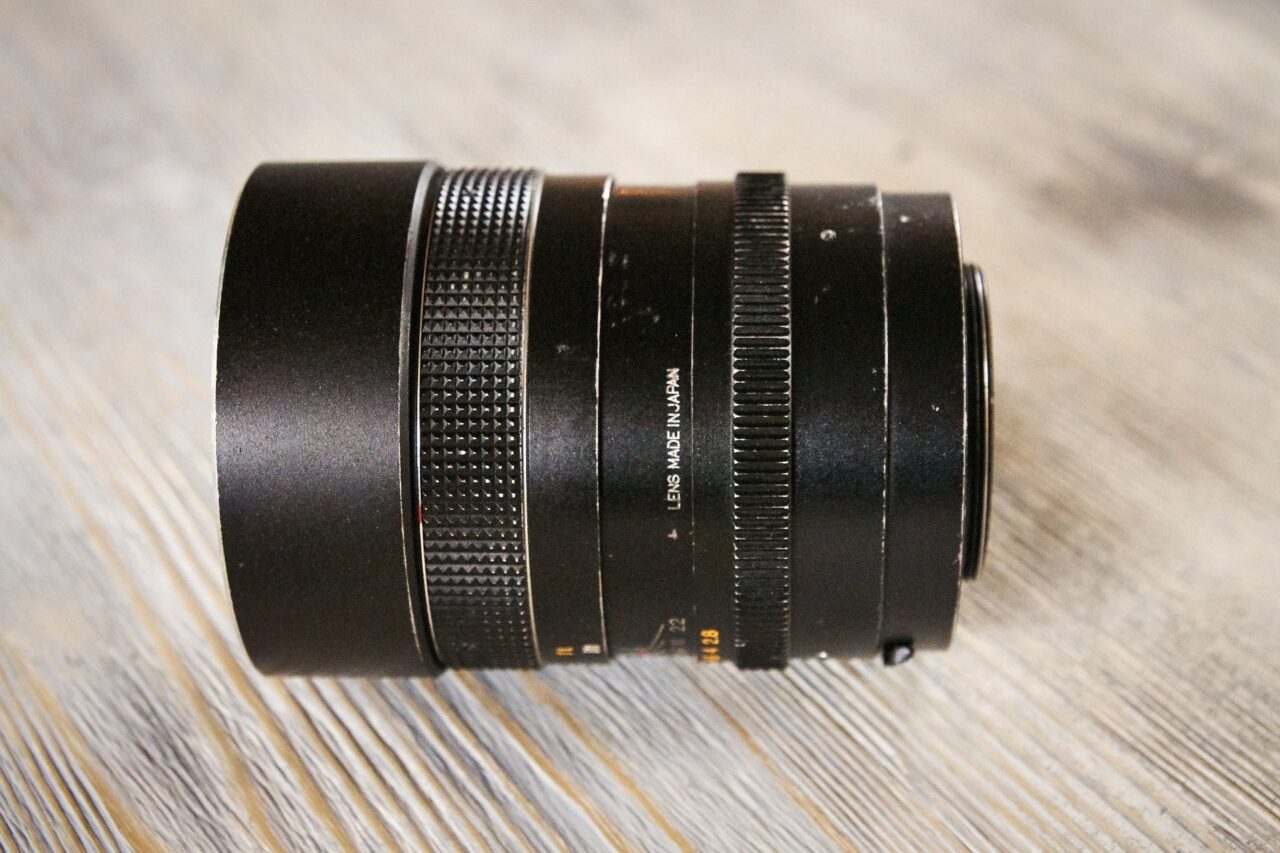 The Hanimex Hanimar Auto "S" 135mm f / 2.8 is compatible with older systems that have a diaphragm pressure mechanism. There was no pusher on this lens, however, in the modern world it is no longer needed. Digital cameras (except Nikon, haha) are able to determine the exposure by metering at the working aperture value. What does it mean? This means that if you need f / 5.6, then you set this value on the lens and keep shooting. 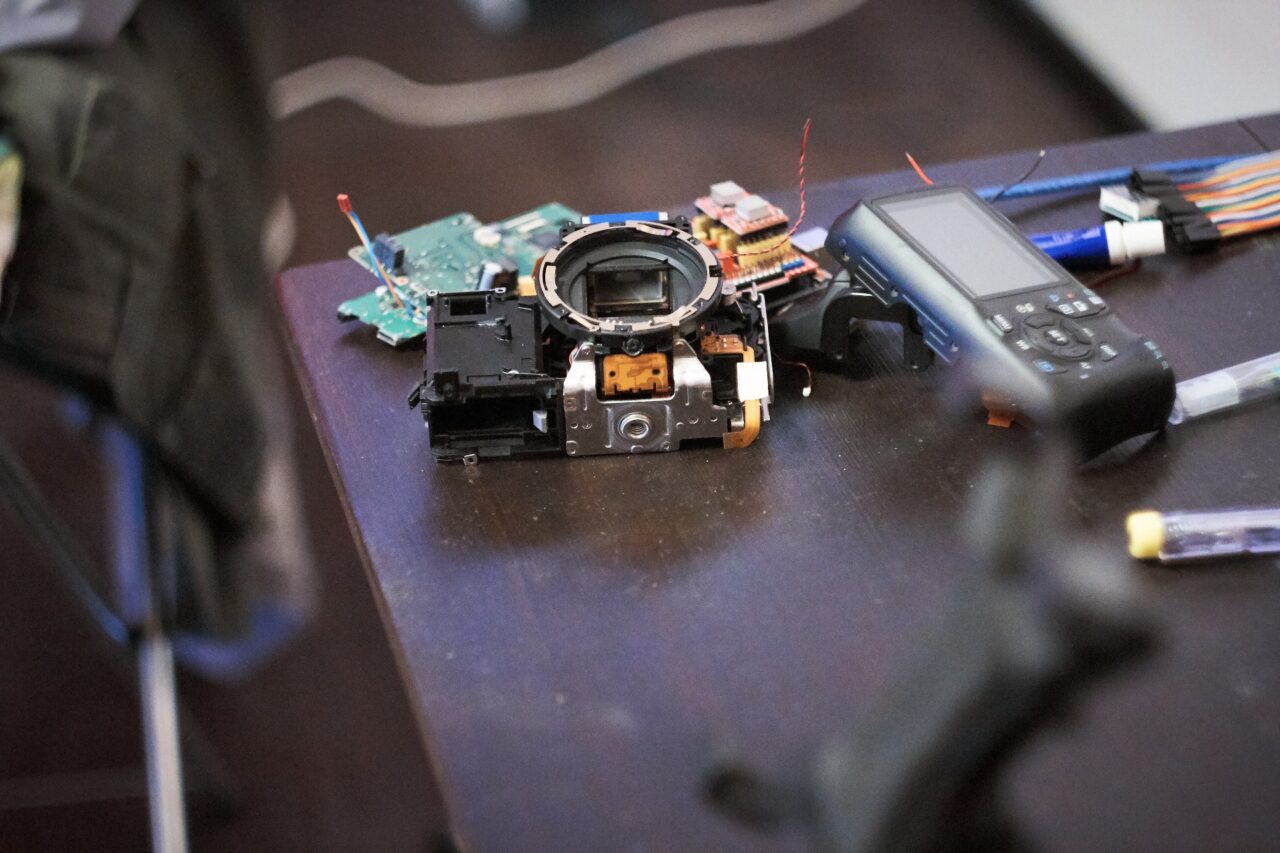 The depth of field is the same as that of a real 135, shallow when open and reluctantly increases with decreasing relative aperture. Portrait. Detail in the field of focus allows you to disassemble the details even in full-size image. Of course, the sharpness is not ringing, but befitting a fix.

Present, but will only be used in the "Manual" mode to set the aperture in operation. A pusher drive mechanism was used for switching. By the way, the switching mechanism itself does not imply any serious use in the long term. Inside lens there is a plate that transmits force to the diaphragm. So, this very plate, if you leave it for a long time, switch the aperture in the “Manual” mode, it degrades. 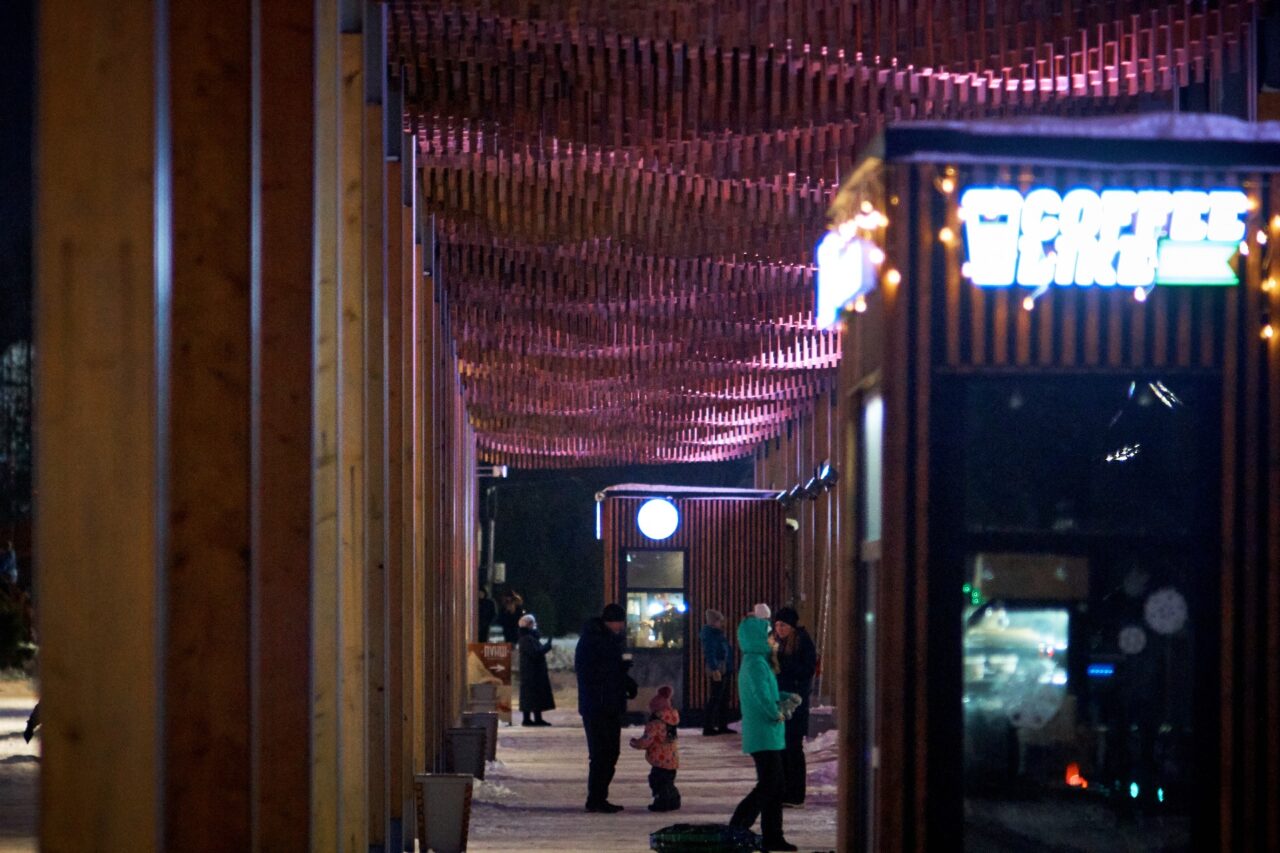 The consequences of degradation are a seized and inoperative diaphragm ring. You sort of set f / 8, and diaphragm covered only up to f / 4. The plate has a certain curved shape, and must always correspond to it, otherwise, during operation, values ​​are set that do not correspond to the marking of the aperture ring. If, of course, they are exhibited at all. 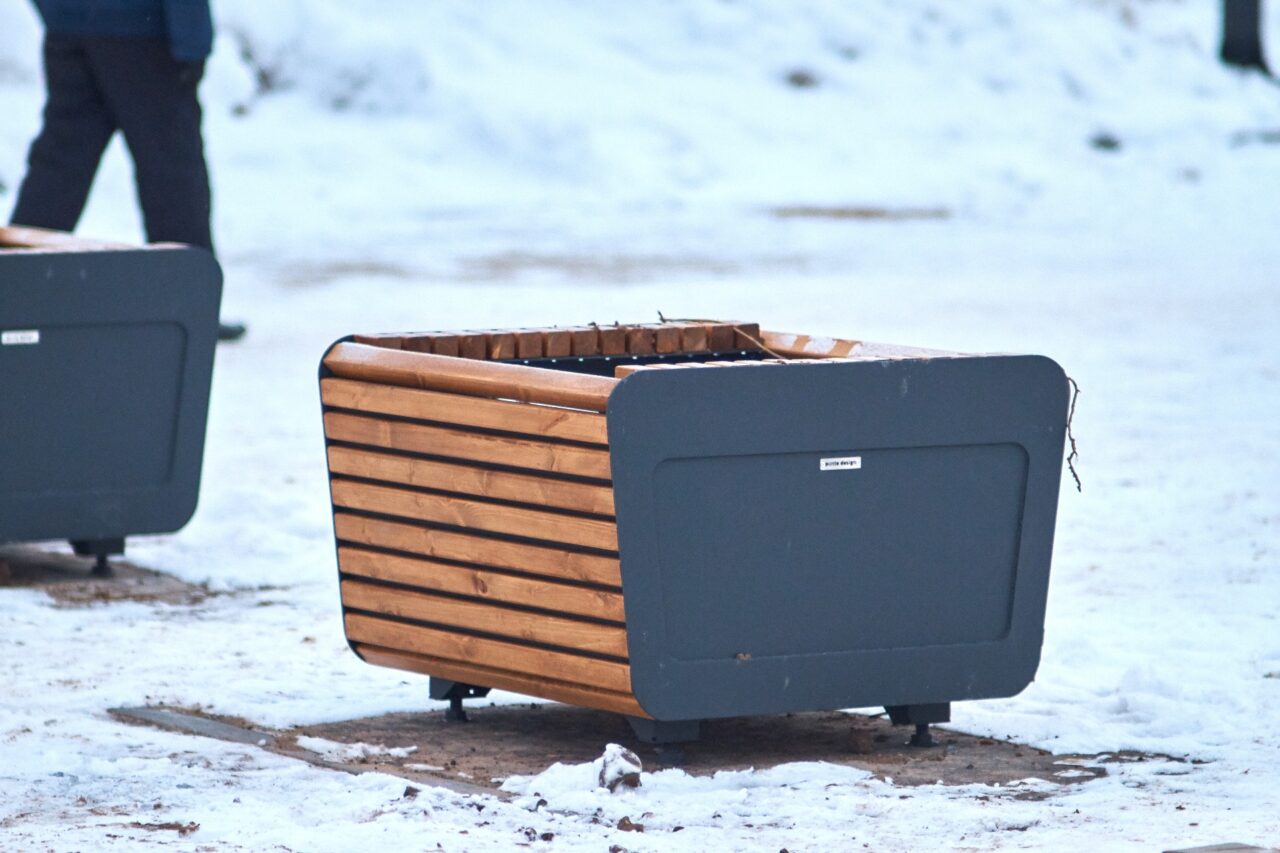 On contrasting transitions, you can find purple halos, in the blur area - green, blue and purple colors. Not always. In general, the transitions between the blur and sharpness zones do not look very clear, the lens, as it were, gradually “blurred” the image closer to the transition to the background. 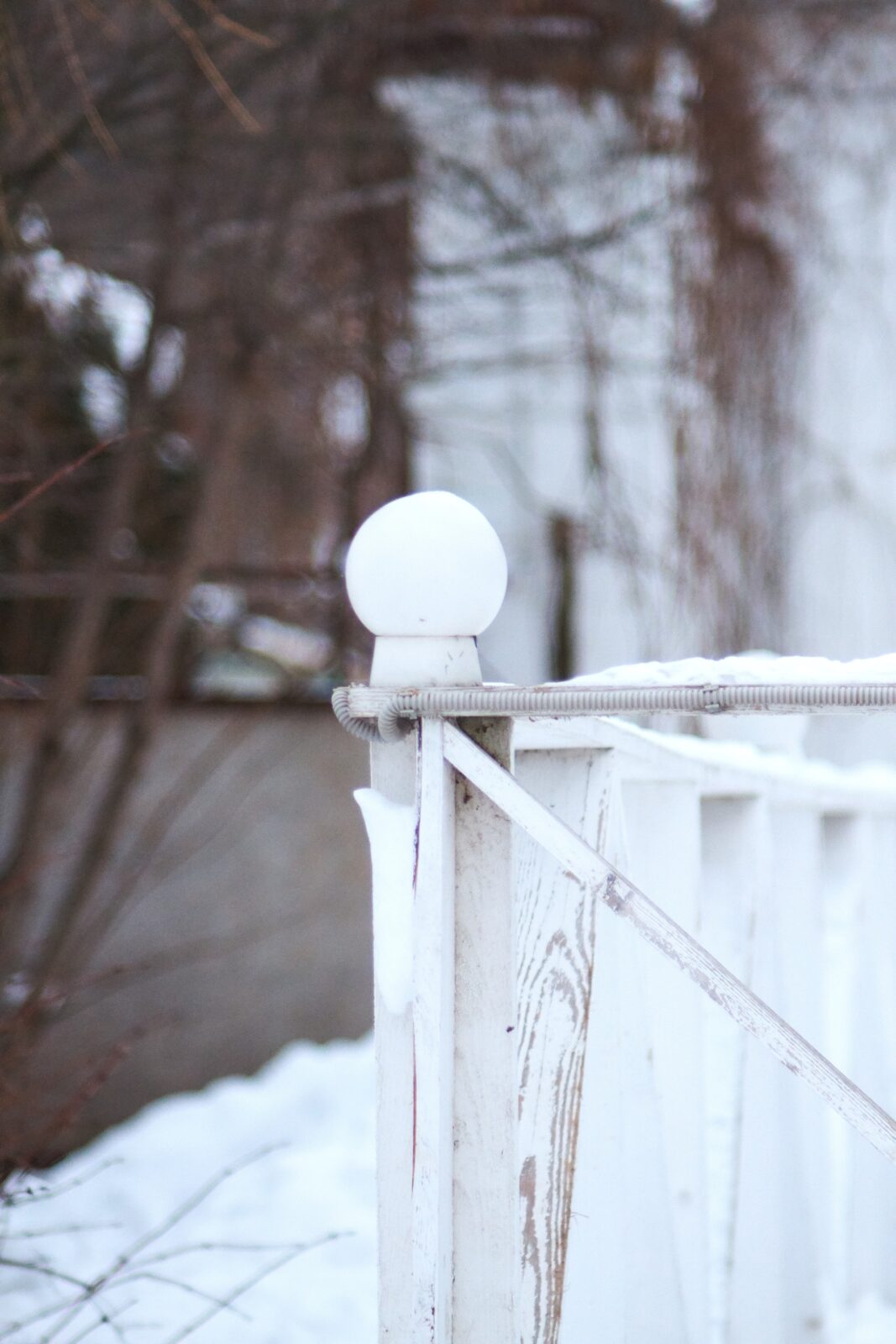 On the cropped Canon 7D it was not noticeable, on full frame it should be visible at the edges up to f / 4.

The contrast in post-processing had to be increased slightly. In general, I have a habit of piling up contrast by default if I shoot with ancient optics. The color is weird, has a "tint effect" out of the box. 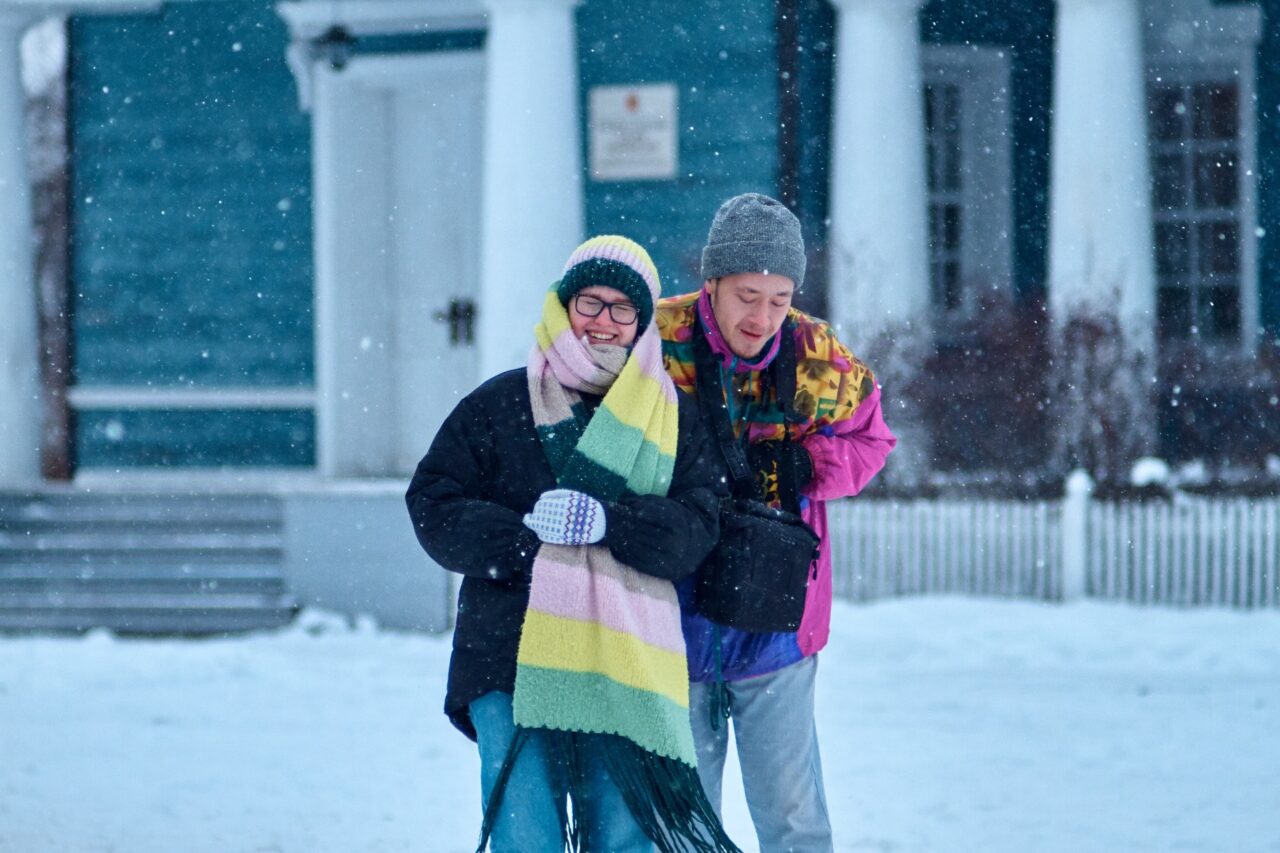 Use on modern digital cameras is limited only to Nikon DSLRs; for everything else, the lens will fit without problems through the appropriate adapter. Learn more about adapters this article.

On a full-frame camera

It has focal length corresponding to the markings on the body, intended for shooting portraits. Of course, in the city limits, you can shoot fearless game.

It has the equivalent of 216mm in viewing angle, without losing the properties of 135mm optics (perspective). The approximation is similar, but more tele-. It is not entirely comfortable to work with the model, since in the city limits she ceases to hear you. 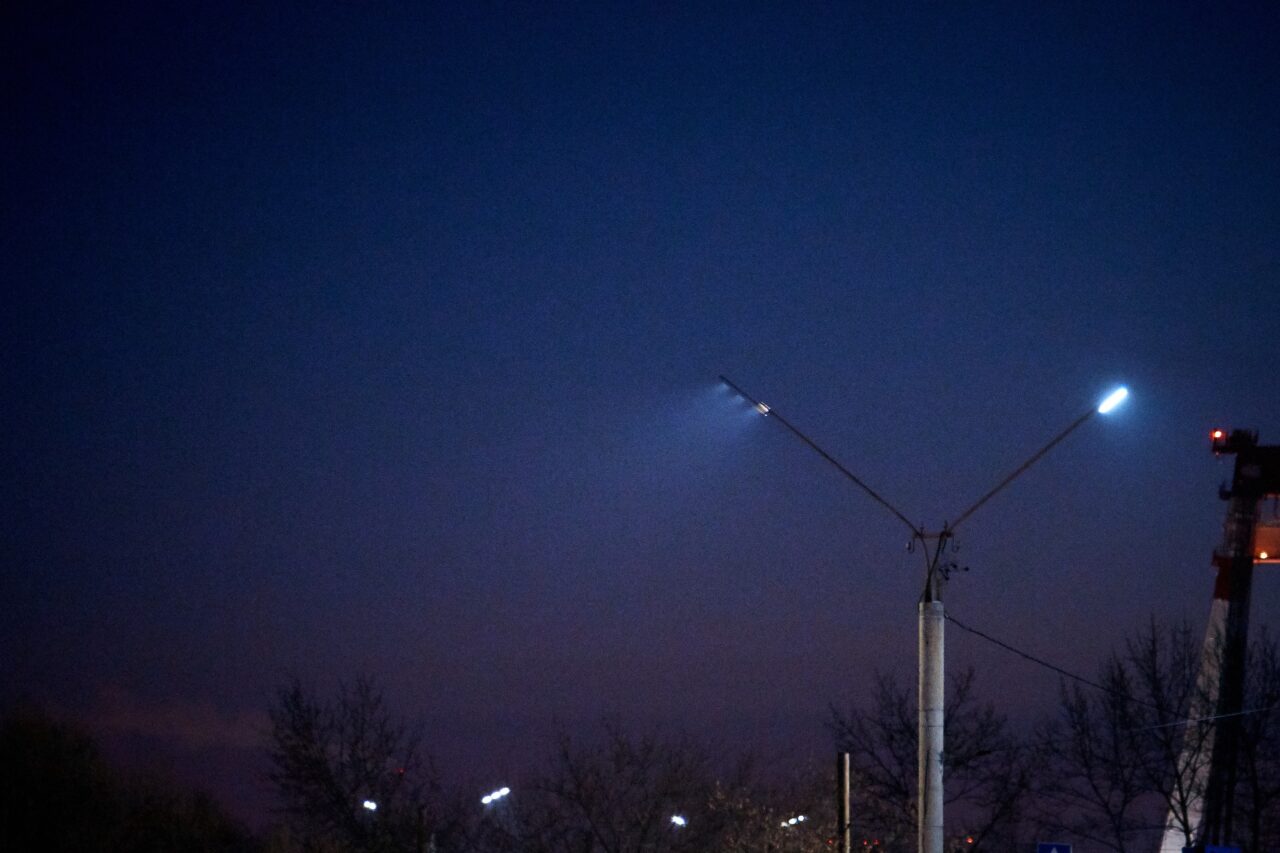 The focal length alternatives below are more specific and can be more expensive. The picture quality (sharpness, detail and color) will be better. According to the scheme, everything is classic "Sonnar"