The name "Industar-22" is from the era of industrialization of the USSR. Lenses "Industar" were recommended for reproduction, photography with a high level of sharpness.

Lens for rangefinder (mirrorless) cameras with M39 screw connection. This lens is installed on modern SLR and mirrorless cameras through the appropriate adapter. Read the article about adapters. 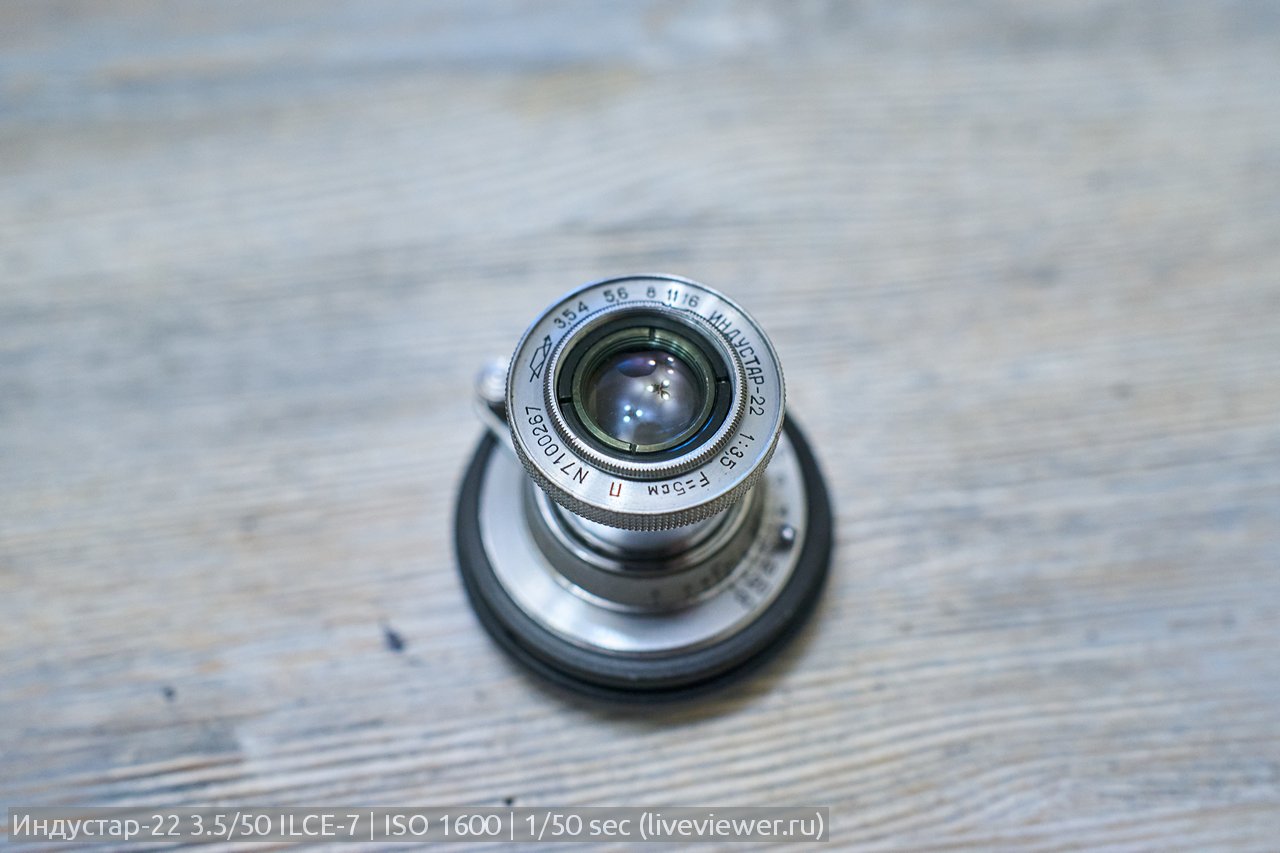 Normal lens with coated optics. Equipped with an iris diaphragm. It was produced in two versions of the optical scheme:

Was a standard lens for the first SLR ZENITs. It had a variety of design options, including a folding version similar to the Leitz Elmar lens (3,5 / 5 cm) 2). In the late 1940s, the original version was recounted by M.D. Maltsev. The recalculated version received the internal (KMZ) name "Industar-22m", but the marking of the lenses themselves has not changed. In the late 1950s, it was replaced by a recalculated lens of the same design - Industar-50. Abbreviations of the name adopted at KMZ: OI-22 (first years of production), then - I-22 and I-22m.

More than 20 varieties of Industar-22 are known. All of them basically differ in the design of the case. 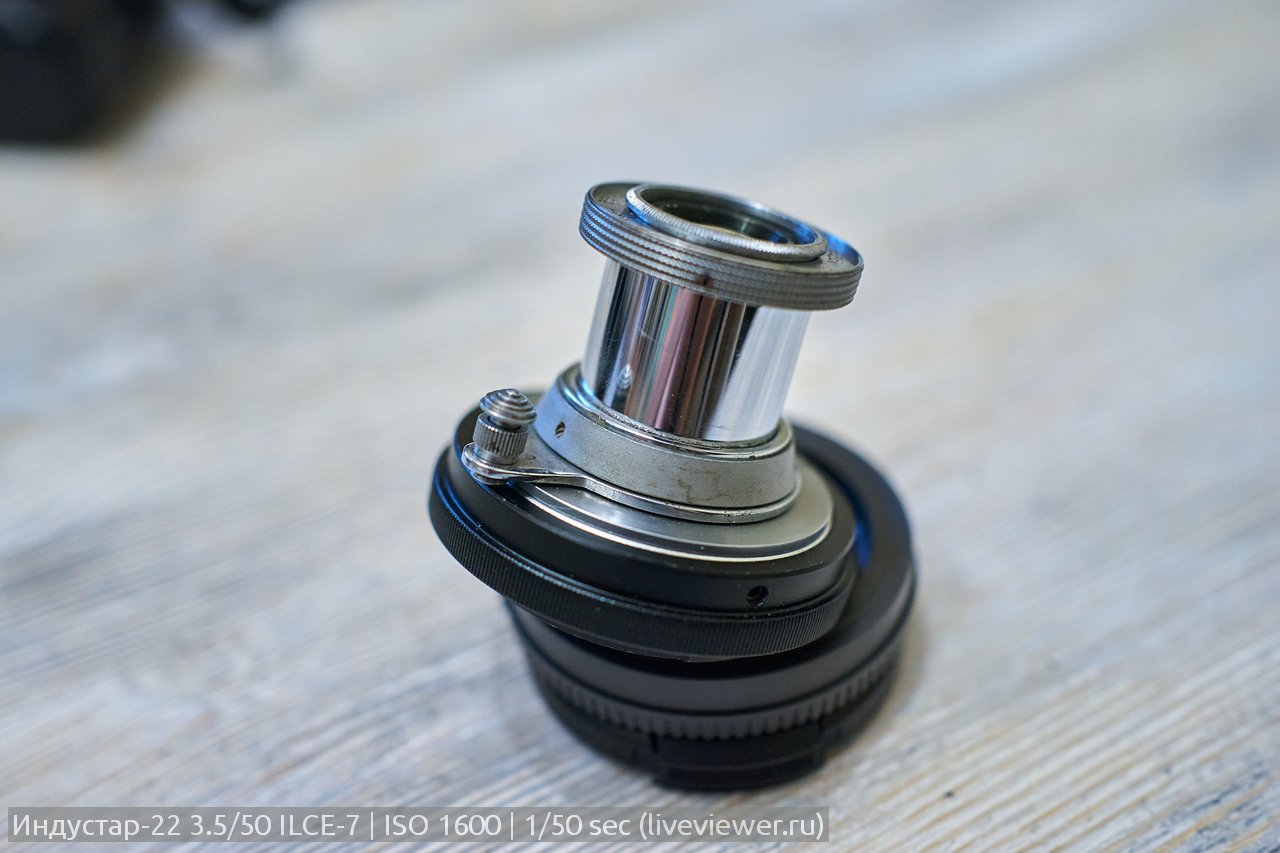 Made according to the "Tessar" scheme. High sharpness, minimal aberration. The lens detects excellent sharpness and color performance in use.

Industar-22 for Zenit SLR cameras (M39) can be mounted on M42x1 threaded connection through the M39-M42 adapter ring. Industar-22 for rangefinder cameras (M39) can be installed on SLR cameras with M42 thread by disassembling the lens and removing part of the frame with the rangefinder pusher. No multi-coated lenses (MC) were produced. The optics have the usual coating, the "P" mark on the front ring of the lens proudly announces this.

Focusing of the Industar-22 lens is carried out by rotating the body around its axis using a lever with a lock at “infinity”.

With the help of the same device, Industar-22 is fixed in the stowed position.

The diaphragm is controlled by a ring on the front of the lens (on versions of the lens with a fixed body, this is inconvenient), has 8 blades. At narrow values, in the out-of-focus area, the highlights will be replaced by “nuts” that repeat the shape of the relative aperture formed by the petals. 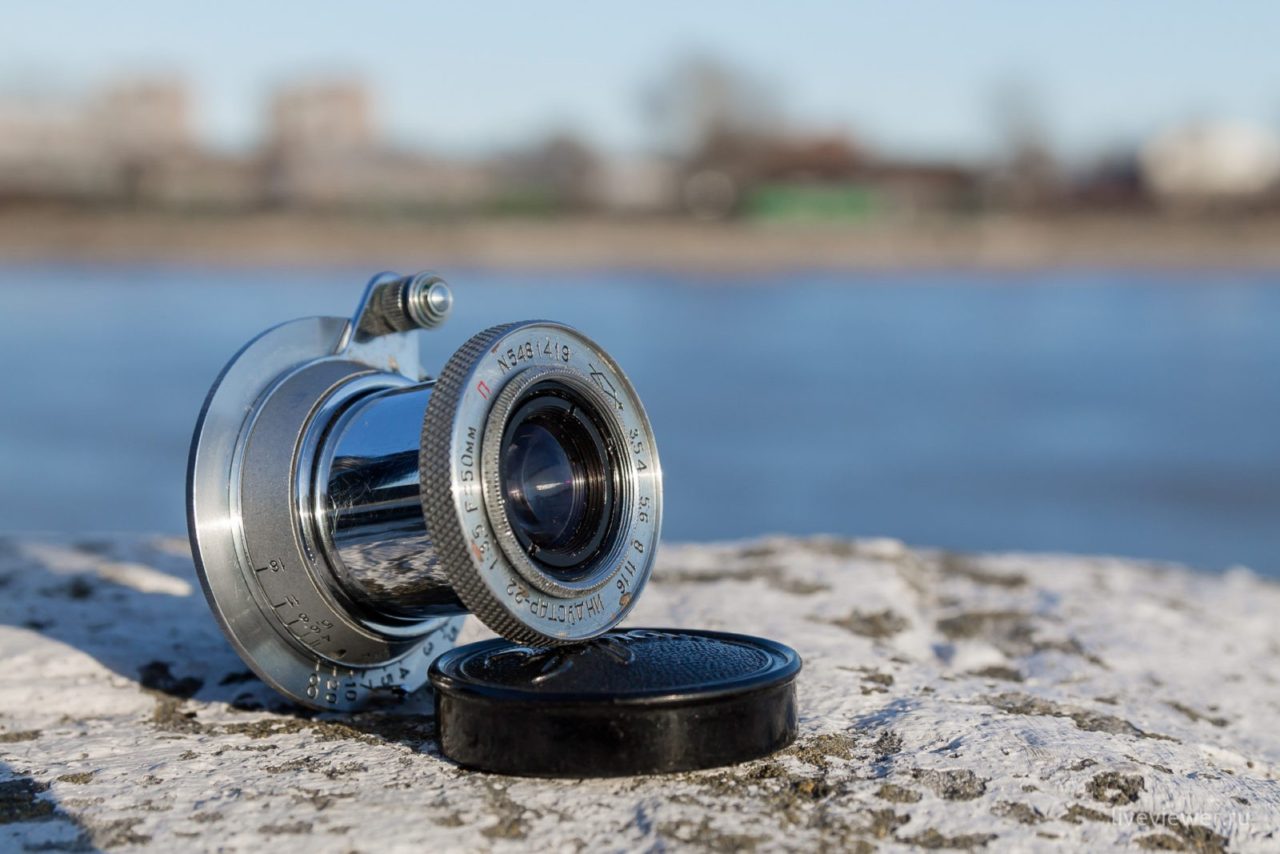 The minimum focusing distance is 120 centimeters, the focusing ring rotates almost 270 degrees around the axis, and thanks to this allows you to more accurately adjust the focus.

Sharp from wide open, depth of field allows for portraits with slight background curling and sufficient background blur for a maximum aperture of f / 3.5. 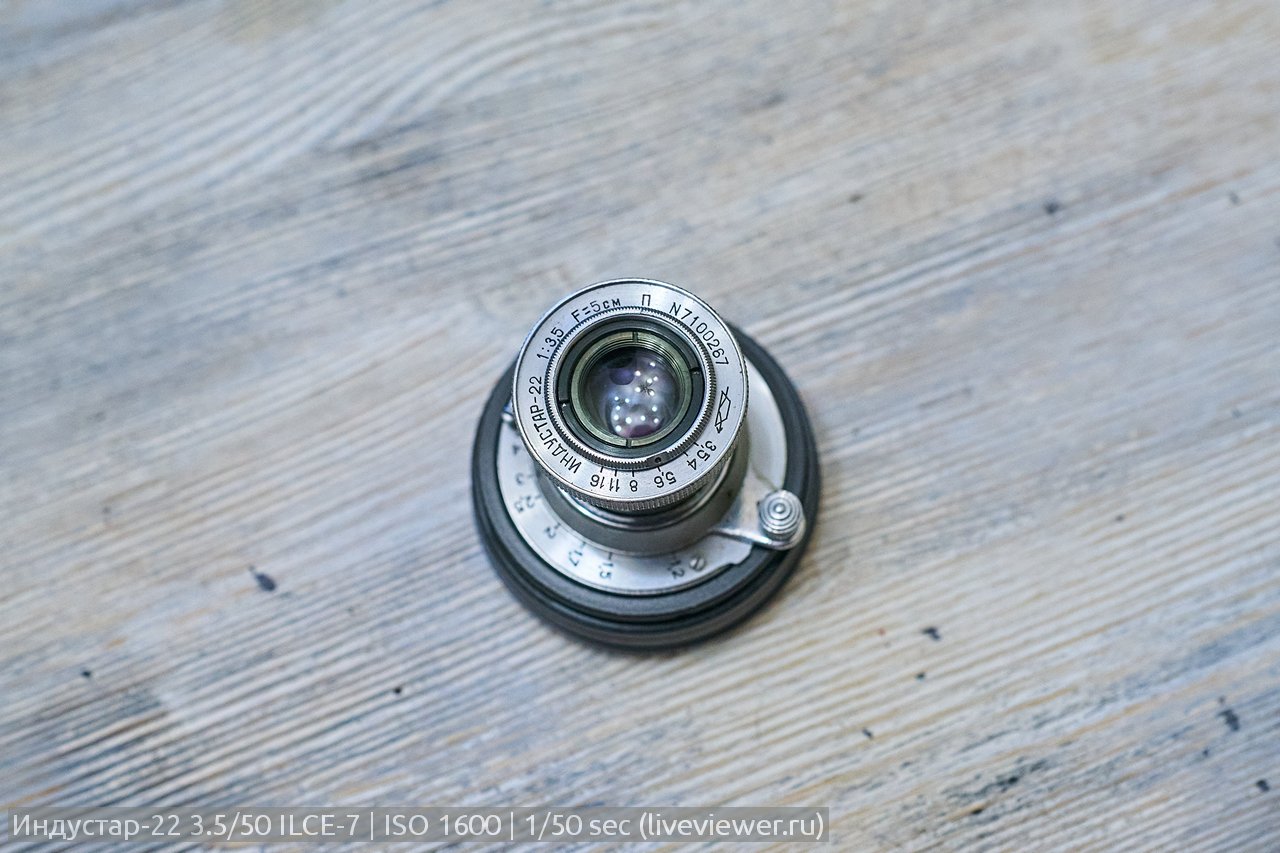 The lens has corrected or minimized aberrations such as astigmatism, spherical and spherochromatic aberrations. The Tessar design itself implies high sharpness and minimization of various aberrations. 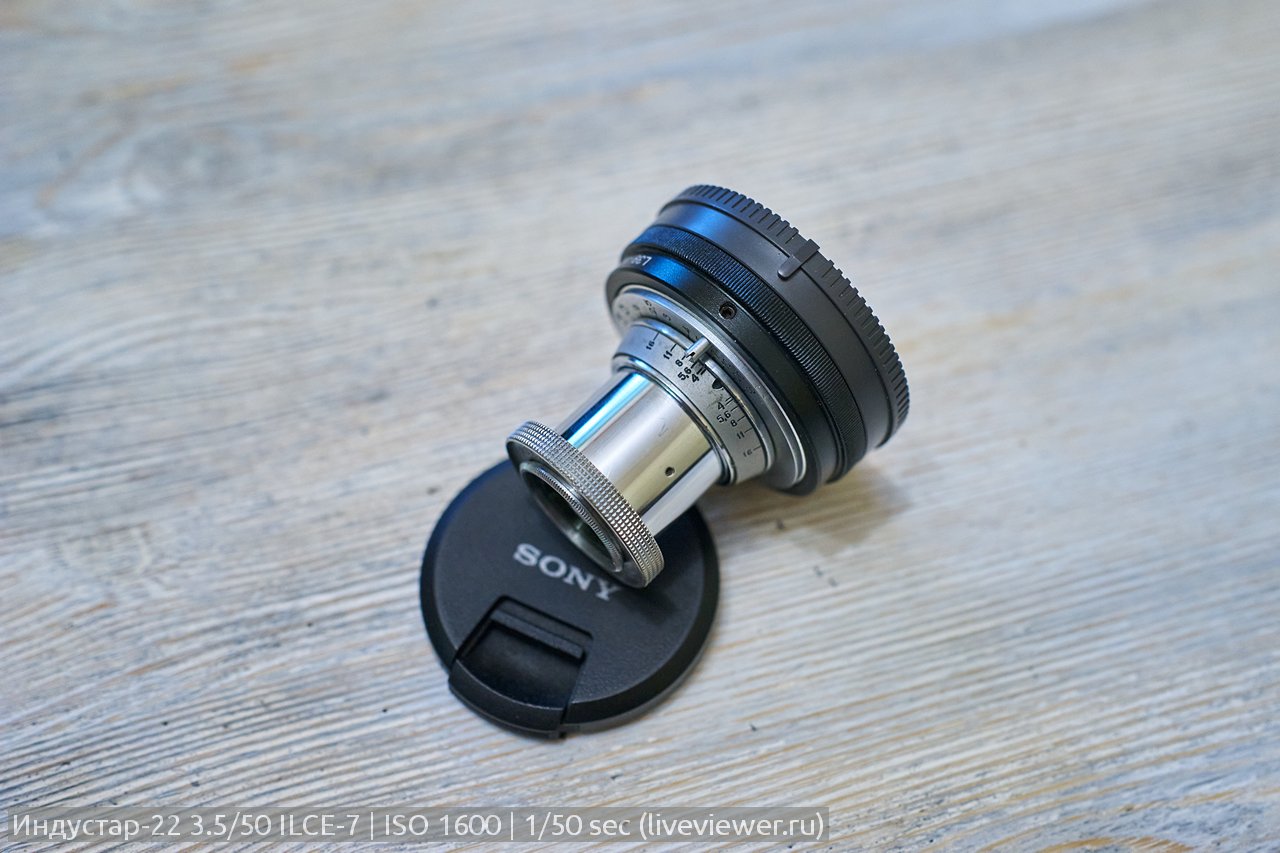 Build quality is decent. Industar-22, of course, is not without backlash. The aperture ring was backlash. The review lens required a lubricant change on the diaphragm assembly. It is very easy to disassemble. Tube design, folding version. Very interestingly marked, its own, authentic focus control. 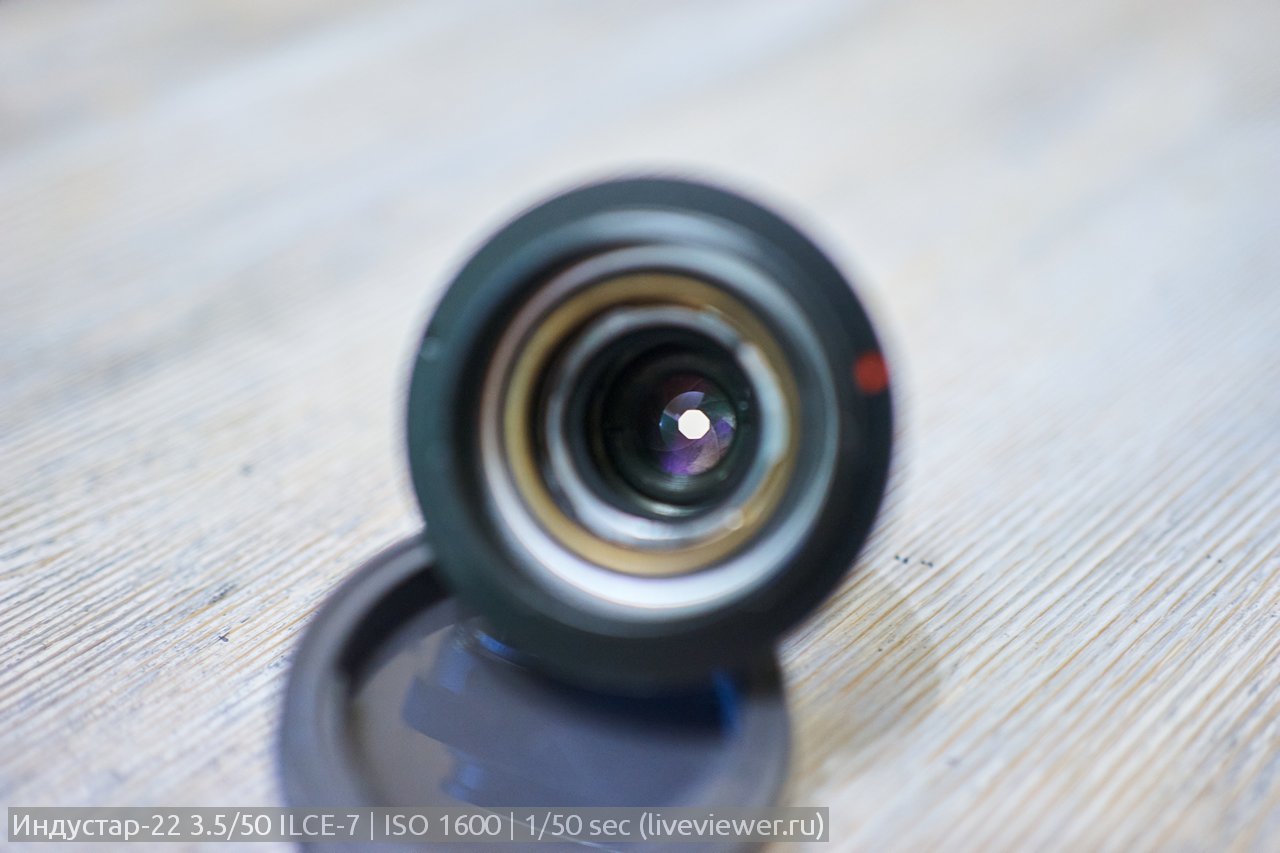 Of all the rangefinder lenses for FED and Zorkikh, I like the tubes Industar-22 and Industar-50. If only because the lens in the stowed position is retracted into the camera.

Use this lens with care on mirrorless cameras. The lens is designed for rangefinders with a deeper body than modern mirrorless cameras have. The specific values ​​of the differences are fractions of a millimeter. But they are enough to break the shutter or leave traces on the matrix. On Sony Nex, for example, the assembled lens rests against the frame window. On Sony A7 and older - will cross the shutter plane. Dangerous. 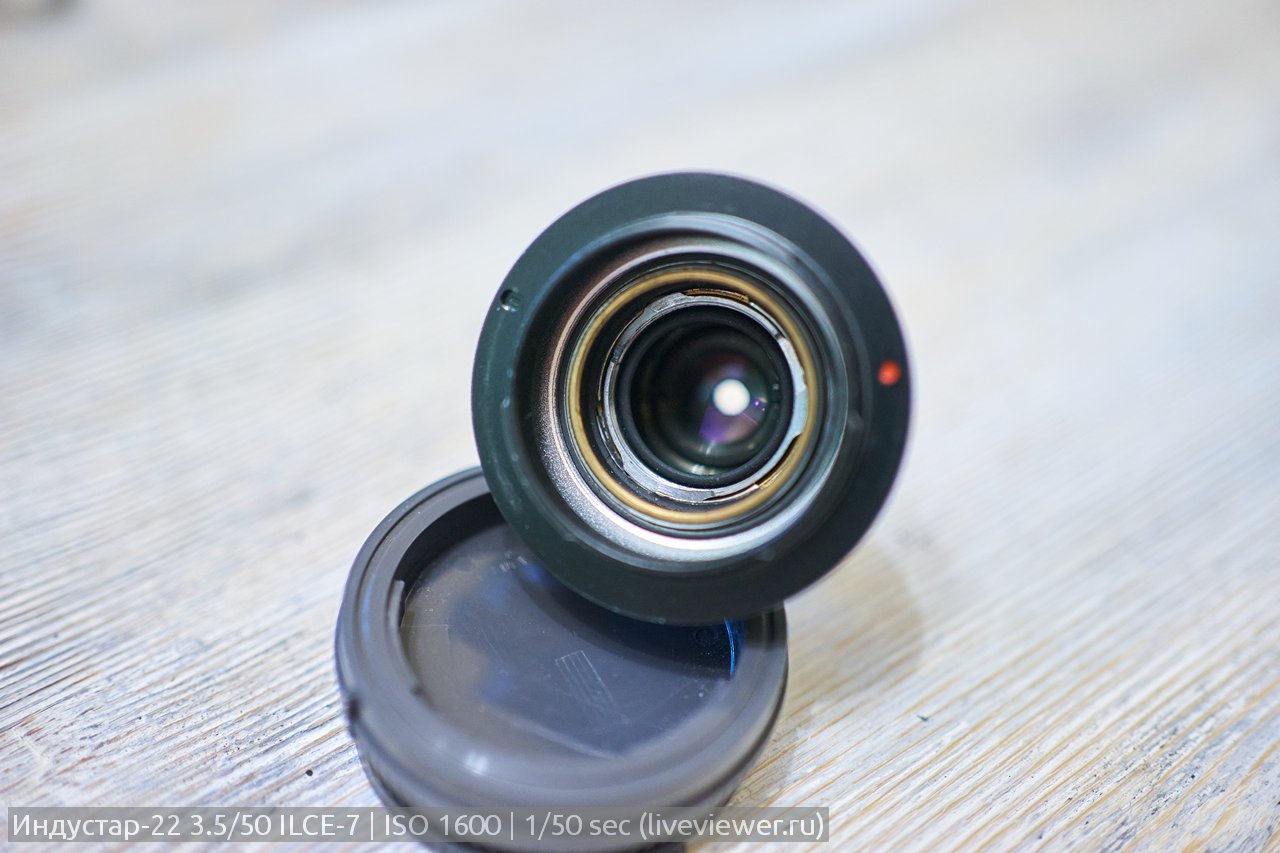 Due to the smaller focal length of the rangefinder option, use on SLR cameras is limited, and the focusing distance allows you to shoot only up to 2 meters. For Canon DSLR cameras with EF mount (-s) through the adapter from M42 to EF can be installed Industar-50 and 50-2. 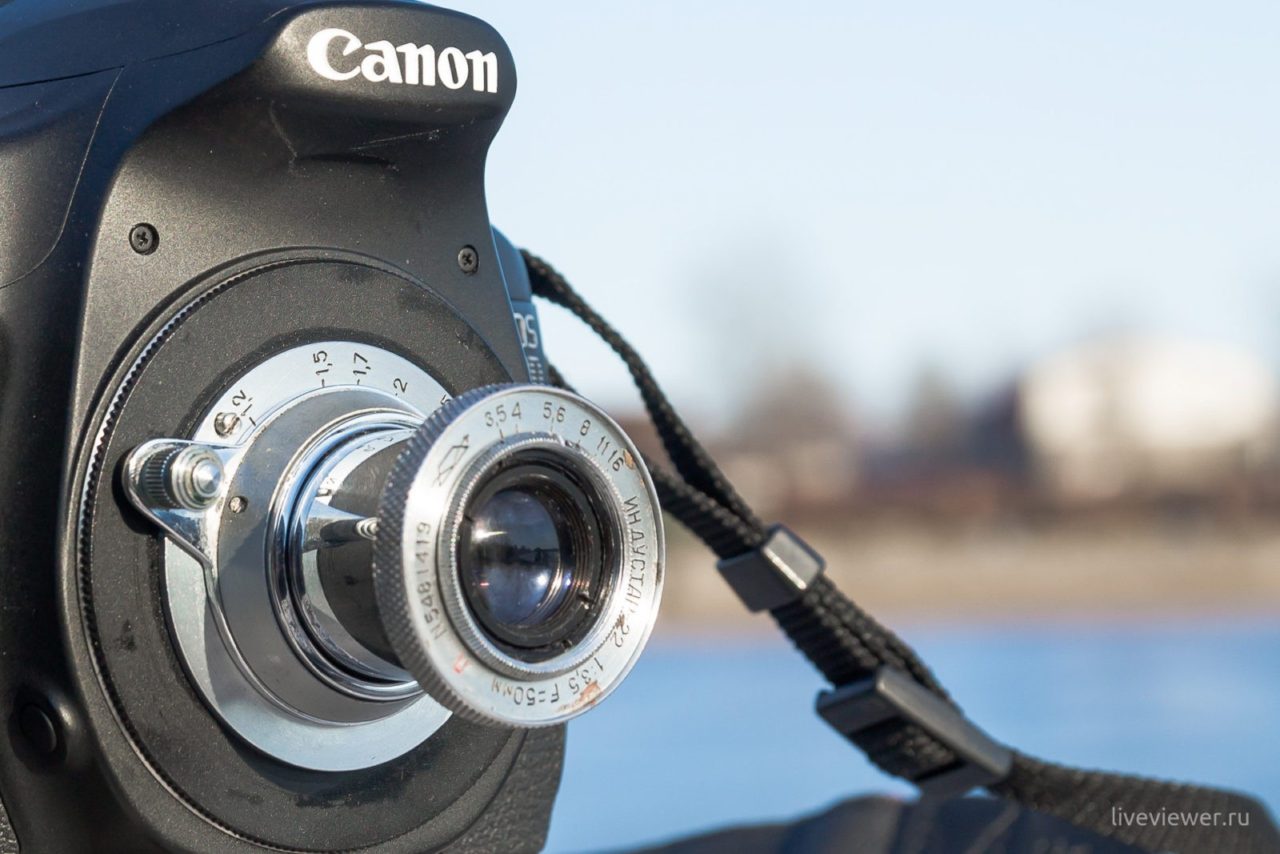 On a camera with APS-C sensor (kf = 1.6) the camera will have a field of view equal to the equivalent 80mm focal length, and the aperture will correspond to the value f / 5,6... Why is that? Because, firstly, because of the narrow viewing angle, you will have to move further. Secondly, the camera's sensor receives 1,6 times less light than a full-frame 35mm sensor. Thirdly, although this does not apply to the previous two statements, the lens on the crop has a drop in sharpness due to the denser arrangement of pixels on the matrix and their concentration in the center of the lens.

Industar-22 can easily mount on mirrorless cameras such as Sony NEX, Canon EOS M, through the appropriate adapter. When using it, you should be careful not to accidentally remove the tube into the matrix. Mirrorless digital camera adapters: 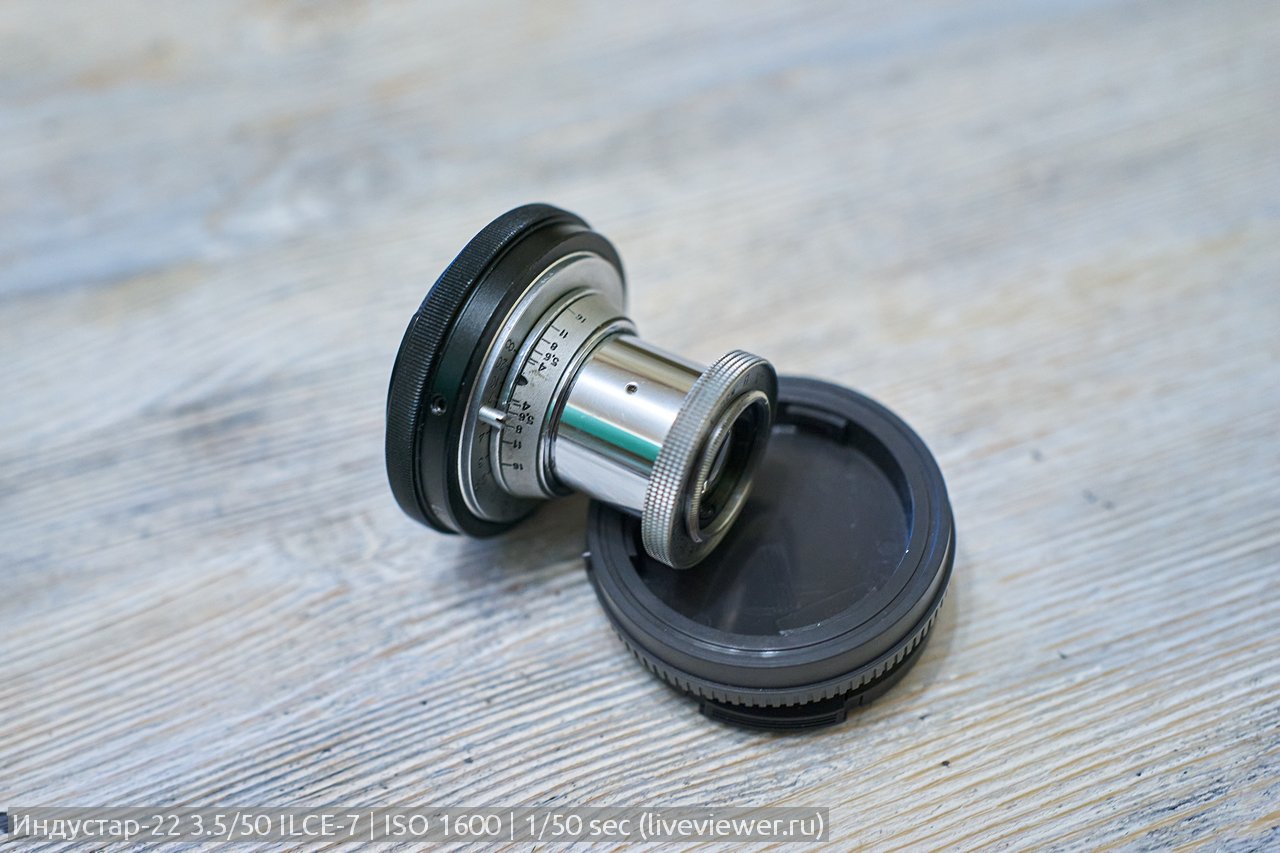 The main probable use of the Industar-22 is in bust portraits. The lens is not suitable for video shooting. management is far from the best. The analogs for SLR cameras presented below are the legacy of the past, which is still in use today.

A complete analogue of Industar-22, since the 60s, has been produced for SLR cameras, and in its mass, it is quite common. Optical qualities are not bad, with the exception of certain nuances in the work.

Helios of any modification will have better artistic characteristics due to the working wide aperture of f / 2, and older Helios models are more resistant to backlight.

Made according to the "Tessar" scheme, has a sharp and clean picture, good sharpness, easy to handle, lightweight. Widespread and cheap.

Examples of photos of Industar-22 on a DSLR

Since the I-22, when installed on SLR cameras, turns into a macro lens, here is an example of photos of how the picture will look when the I-22 is mounted on a DSLR. Modeled using an Industar-61 L / D rangefinder lens similar to the I-22 and Nikon D5100 camera. 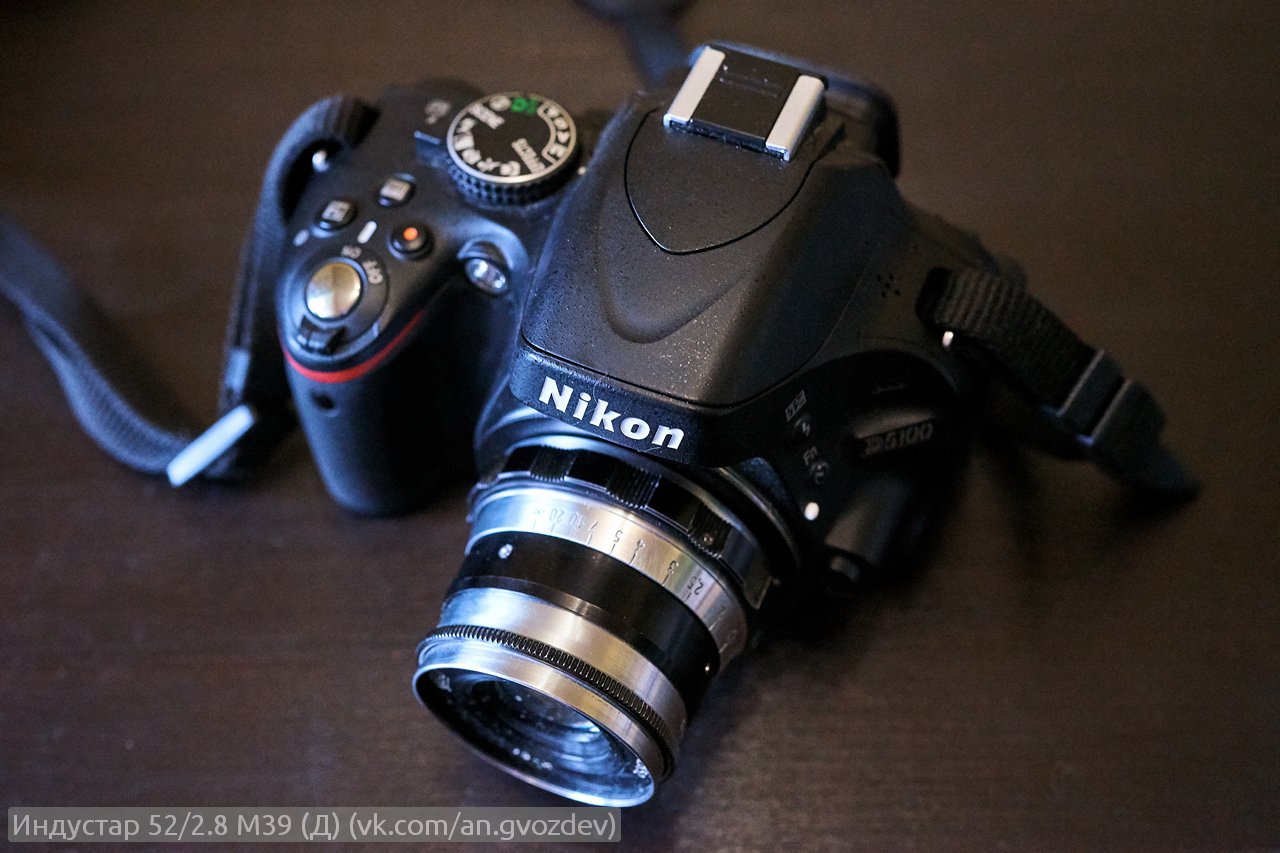 Examples of photos of Industar-22

Shot with a Sony A7, pay attention to the lens barrel when folded - when folded, the tube crosses the plane of the shutter. It will hurt a lot.

It fits perfectly on mirrorless cameras like Sony NEX, Canon EOS M. The main thing is not to fold the lens. In the secondary market, it has a cost of 500 rubles, but its rarer clumsy version is a couple of times more expensive. Thanks to the folding design, the FED and Zorkiy of the first models fit freely in the pocket of your trousers, allowing you to carry these cameras with you everywhere.