Kiev-15 is a small-format single-lens reflex camera produced in Kiev at the Arsenal plant in 1973-1985.

In total, about 35 thousand copies were released.

The camera was equipped with a non-removable pentaprism with a TTL exposure meter based on cadmium sulfide (CdS) photoresistors, the shutter cocking was combined with film rewind. 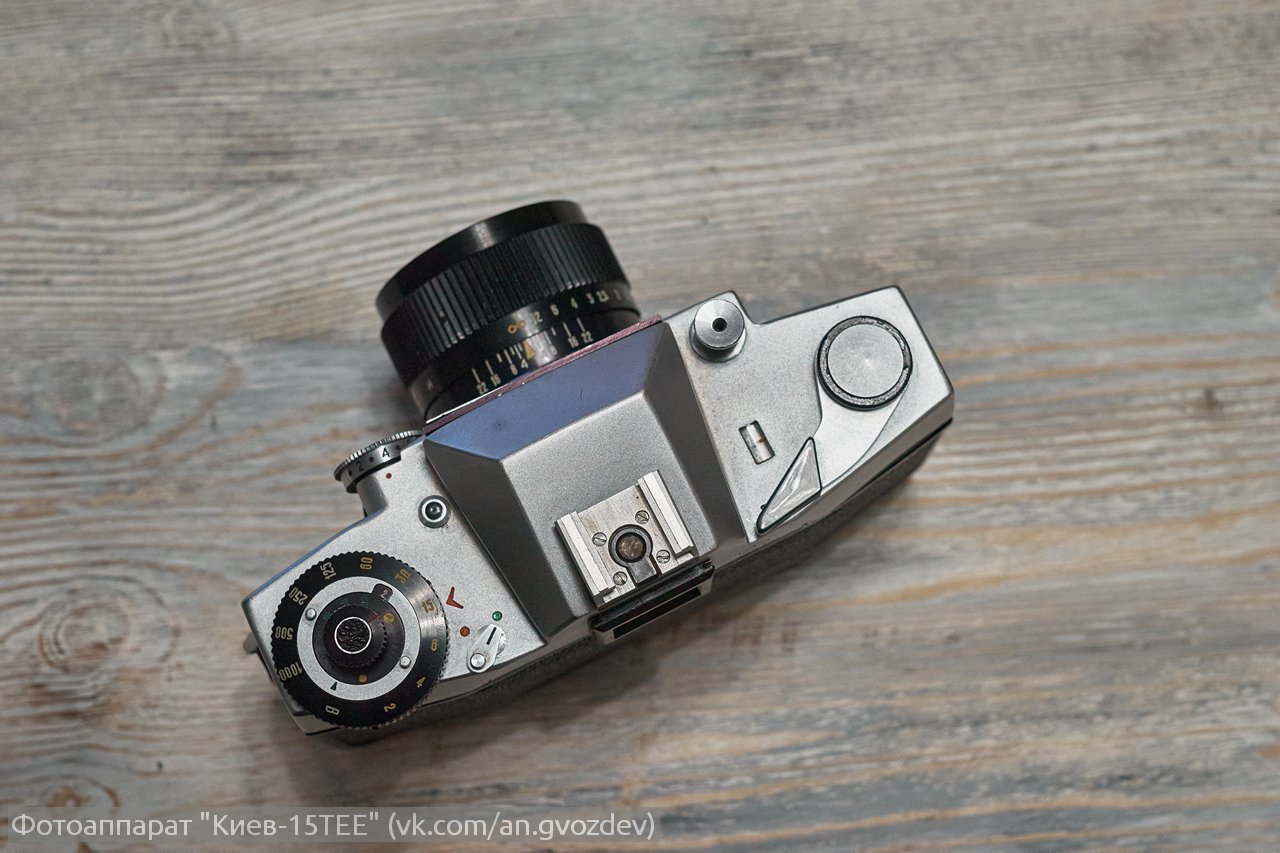 The Kiev-15 camera, like the previous Kiev-10 camera, was equipped with shutter priority automatic control, which was controlled by an exposure meter (shutter speed from 1/2 to 1/1000 s. Synchronization with electronic flashes at 1/60 s), The exposure meter had two modes of operation: normal mode and mode of operation in low light conditions (only "Kiev-15 Tee"). 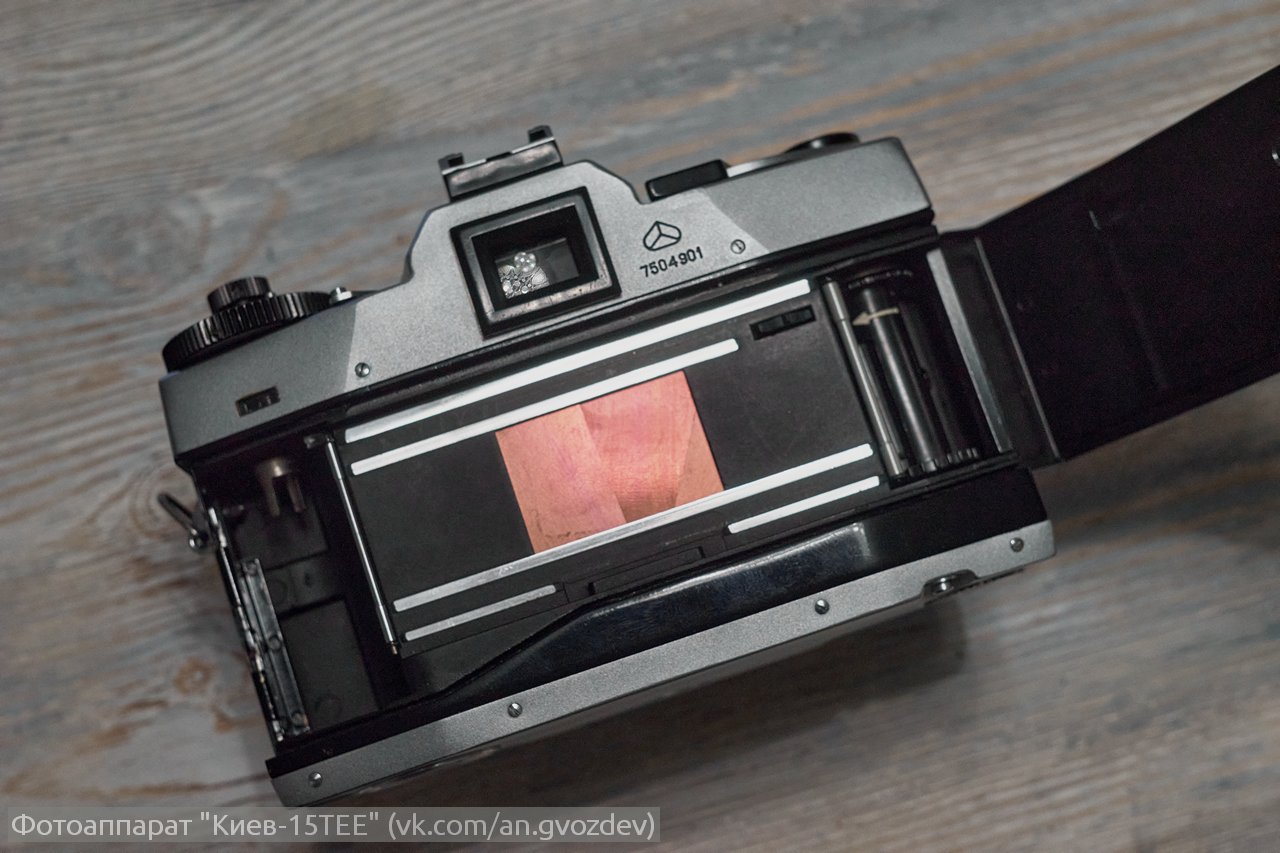 The Kiev-15 camera used a unique mechanical fan shutter with a balancing device - this minimized camera vibrations when the shutter was fired, the camera was made in a durable metal case. Another feature of this camera was that it used lenses without an aperture ring. Aperture values ​​were set by a dial on the camera body, which was mechanically connected to an aperture lever on the lens, directly connected to the aperture mechanism. Using the same leash, the camera could automatically set the aperture when shooting in shutter priority mode. The same disk was used to switch from automatic to manual mode. 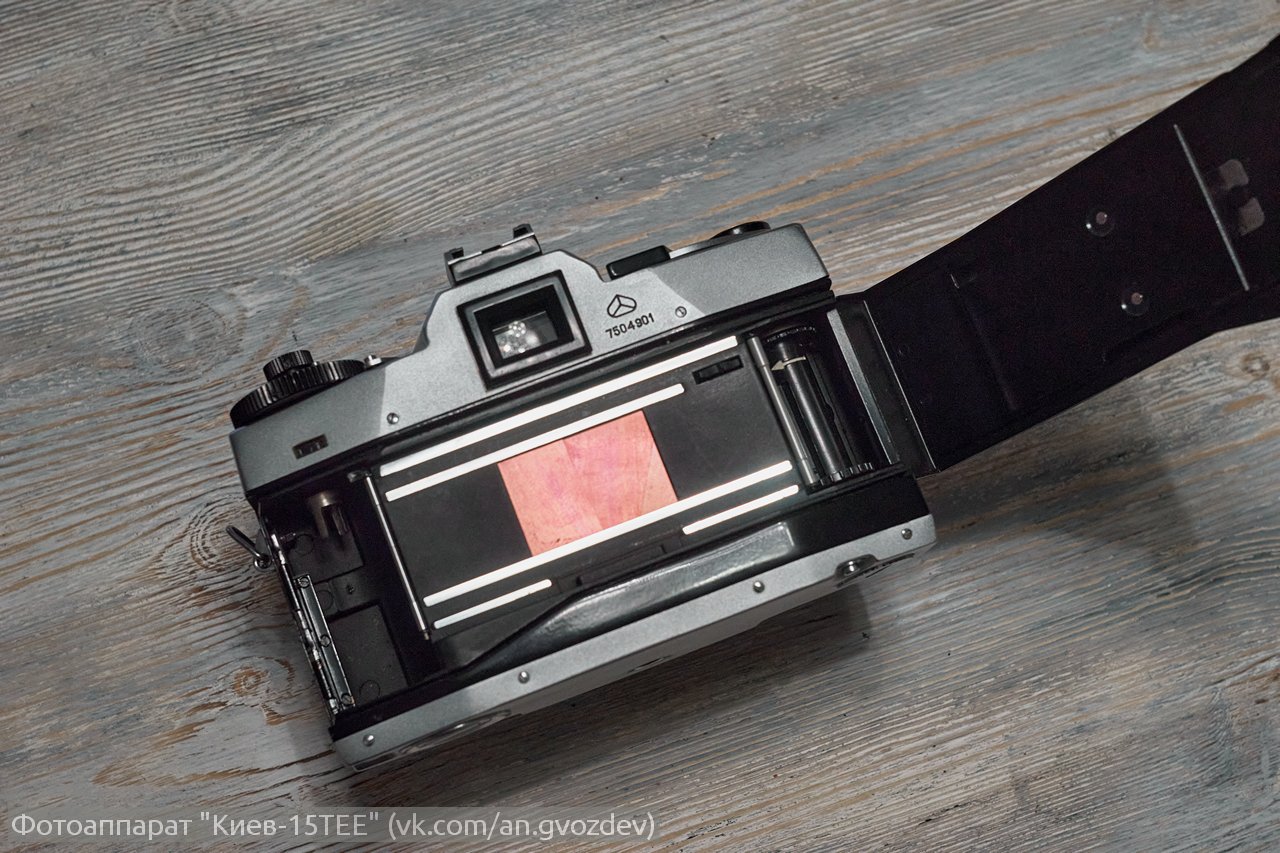 In the field of view of the viewfinder, the arrow indicator displayed the aperture being worked out in automatic mode (or recommended for semi-automatic exposure). The inclusion of the exposure meter was carried out by a switch located near the shutter speed head. The exposure metering device of the camera was powered by one RTs-53 mercury-zinc element (a modern analogue of the PX-625) or a D-0,06 nickel-cadmium disk battery. 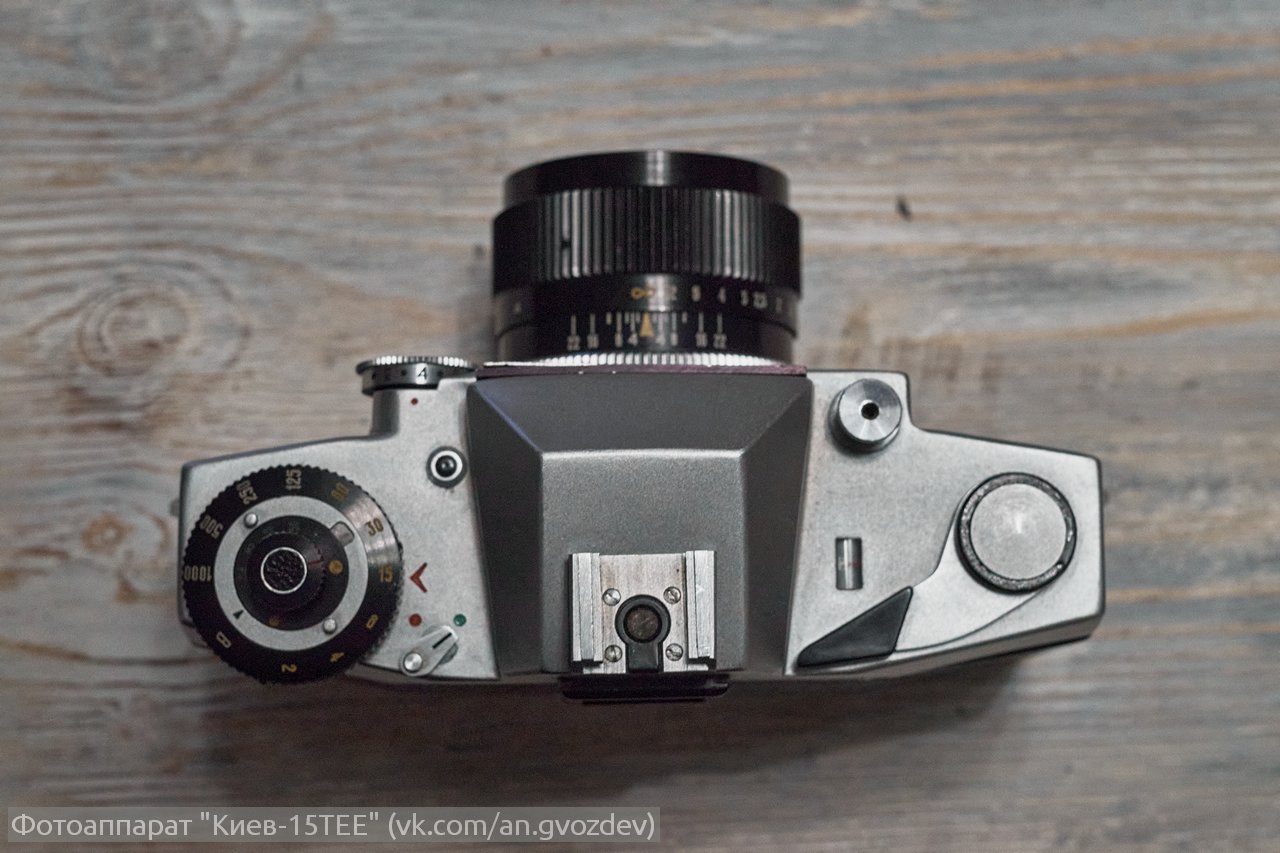 The camera is equipped with an “X” sync contact with a holder for an electronic flash, sync speed 1/60 s, as well as the central sync contact. A feature of this camera is its weight (1250 g) - this is one of the heaviest small-format Soviet cameras, since a large part of the internal parts were made of steel. However, the large weight of the camera dampened vibrations from the shutter and mirror mechanics well, so it was not an unambiguous drawback.

The camera was equipped with a Kiev-Avtomat mount of an original design, which, in addition to the Kiev-15, was used only in the Kiev-10 camera. "Kiev-15" could be equipped with a standard lens "Helios-81 Avtomat" 2/50 or "Era-6 Automatic "1,5 / 50. The Arsenal plant produced interchangeable lenses based on lenses already mastered by the Soviet industry. For cameras "Kiev-10" and "Kiev-15" lenses with a jumping aperture were intended, in the name of which there was the word "Automatic". 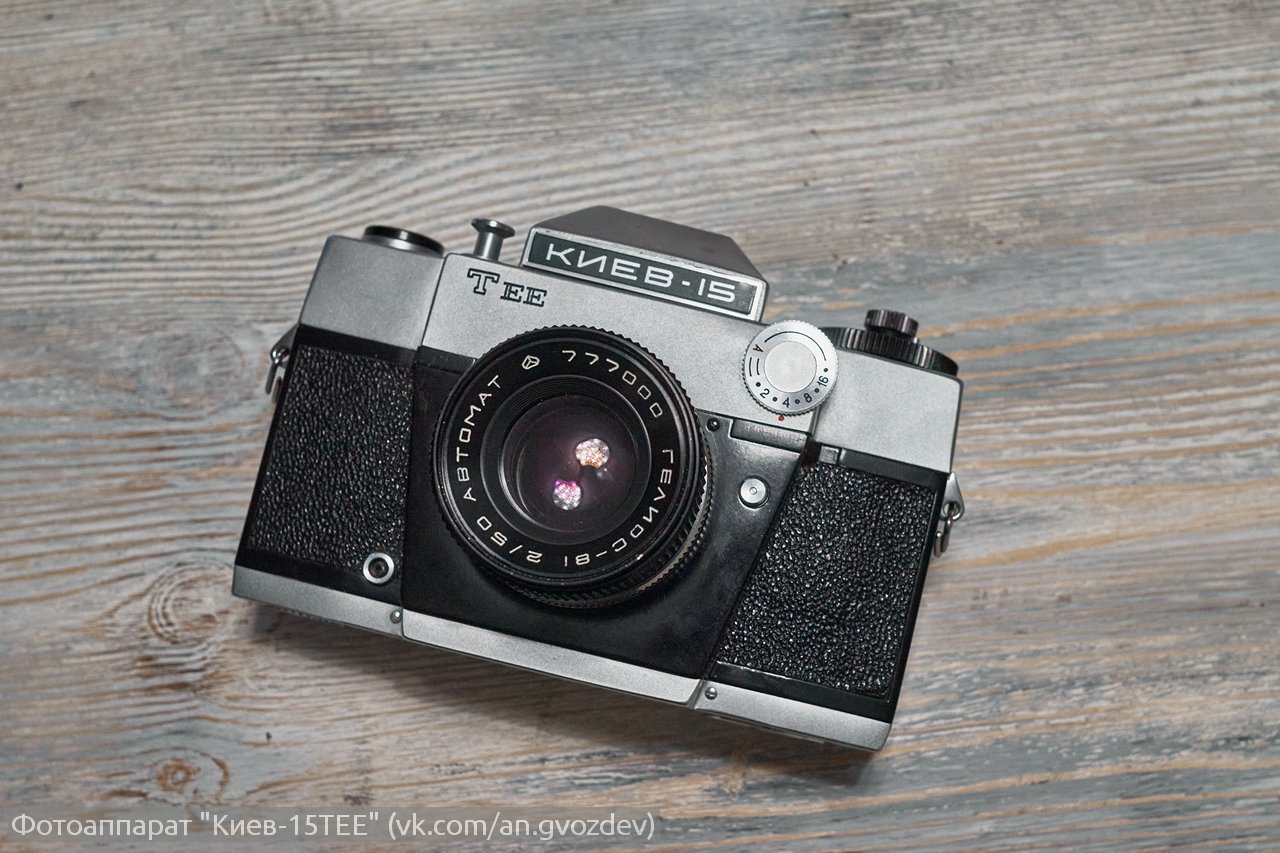 Lenses for "Kiev-15" and "Kiev-10" cannot be fully used on another camera without serious intervention in the design of the lens - in addition to the unique mount, the lenses for these cameras differed in that they did not have an aperture setting ring. The disadvantages of some of these lenses include the shiny surface of the aperture blades, which is typical, however, for many Soviet lenses with a "jumping" aperture.

The Kiev-15TEE cameras were supplied with an adapter for mounting lenses from a Zenit camera with an M39 × 1 / 45,2 thread (despite the fact that the production of lenses with this mount was discontinued in the early 70s). Lenses with the M42×1 mount did not physically fit into the camera mount. Also included could be an extension ring with a diaphragm drive transmission.

The Kiev-15TEE camera was very rare and highly valued at the time of its official sales (sales peaked in 1978), and is now valued by collectors. The cost of the camera in those years was 360 rubles.