Aperture is a photometric characteristic of an optical system that characterizes its ability to transmit light energy from parts of objects to the corresponding parts of their images.

Often under the aperture value lens mean maximum f-number lens. Aperture indirectly affects the quality of astronomical instruments with a lens: telescopes and astrographs. Its value is inextricably linked with the maximum aperture, which determines the minimum luminosity of celestial bodies available for registration by visual or photographic means. To conduct successful observations, optical instruments with the highest possible luminosity are created, which make it possible to detect stars and their clusters at large distances. For other observation devices, the aperture ratio of the lens determines the minimum illumination at which it is still possible to distinguish objects visible through the optical system.

What is the luminosity

Geometric aperture characterizes the light transmission of the lens only in part, since it does not take into account the transparency of its lenses. When the light flux passes through the lens, part of it is absorbed by the mass of glass, and part is reflected and scattered by the surface of the lenses and frame, so the light flux reaches the photosensitive element weakened. The luminosity that takes into account the transmittance of the lens is called effective aperture (in some sources - physical aperture). The effective luminosity is always lower than the geometric one. 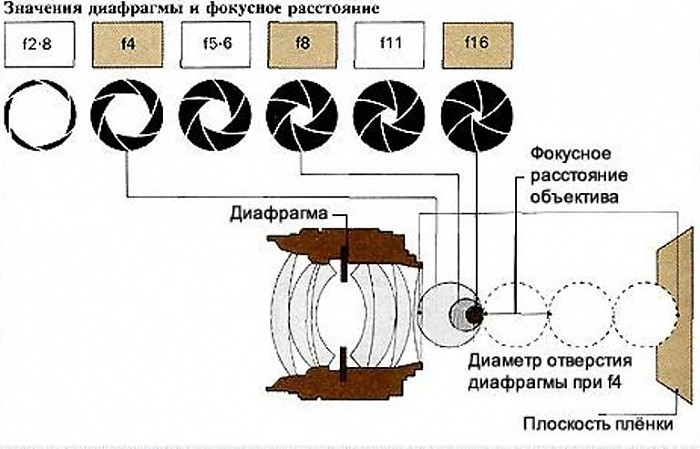 Aperture is not the power of light

Aperture must be indicated in the characteristics of any lens. This does not necessarily mean separately sold optics. These words apply even to compact cameras with a built-in lens. Moreover, now such parameters can be found even in the characteristics of flagship smartphones. Indeed, in the production of cameras built into them, more and more advanced lenses are used. As a result, the device receives high-aperture optics, and the pictures become very bright.

If diaphragm can open very wide, then a lot of light hits the matrix. Some lenses provide f/1,4 aperture. With this parameter, you can use a shutter speed of 1/4000 second, while the matrix will have enough light. Increased aperture favorably affects the quality of portrait photographs. The more it reveals diaphragm - the smaller the focus area becomes. The result is a beautifully blurred background. This effect is also called “hips". That is why experienced photographers use high-aperture lenses for portraits. They leave all kinds of zoom optics for shooting landscapes.

Also glasses with a good f number are needed for evening photography. If there is a lack of lighting, either a long excerpt, or wide open diaphragm... No one will interfere with increasing the shutter speed, but this will not allow you to fix moving objects in the frame. Therefore, it is better to open the aperture to f / 1,8 or f / 1,4. But this method does not always work. Indeed, with this value, the field of focus narrows, and sometimes it does not correspond to the photographer's idea.

It should not be forgotten that at the maximum relative aperture, the quality of the resulting image is worse than at medium apertures, despite the perfection of the lens design. Vignetting reaches its maximum values ​​also at full aperture ratio. In addition, the depth of field is very small and insufficient for a sharp display of objects that extend into the depth of the frame. This is most noticeable when shooting from short distances, so the aperture ratio of macro lenses is often relatively small. However, the use superluminous lenses with an open aperture allows you to get artistic effects in photography and cinema that are inaccessible to optics with a low aperture. A large maximum aperture is typical of portrait lenses, which allow residual spherical aberration and soft optical design.

High aperture is easily achieved in normal lenses with their small dimensions and relatively low cost. While maintaining small aberrations and high resolution, increasing the luminosity requires limiting the angular field. So it is usually lower for wide-angle lenses, and for long-focus lenses it is limited by chromatic aberration, which grows in proportion to the focal length and can be eliminated with great difficulty. Dimensions of fast wide-angle and telephoto lenses can increase several times compared to less fast counterparts. In accordance with the principle of invariance of optical systems, the product of the tangent of the angular field, the square root of the focal length and aperture ratio is a constant for any anastigmat objectives with the same level of their optical perfection.