John Henry Dallmeier gave birth on September 6, 1830, to the family of wealthy landowner William Dallmeier and his wife Catherine. From childhood, he was distinguished by intelligence and a thirst for scientific knowledge. As a teenager, he was sent to Osnabrück, where he studied optics for three years. In the middle of 1851, John went to London, where he managed to collaborate with a small workshop "Hewitt Optics", before the device to Andrew Ross's company.

Ross made lenses and telescopes, and a few years later John became a scientific advisor to his employer, taking responsibility for testing and improving the performance of various types of optical equipment. Several telescopes modified by Dallmeier have been used to observe Venus and solar eclipses. In recognition of his contributions to astronomy, John was honored with membership of the Royal Astronomical Society.

The relationship with the founder at Ross's company was so good that Dallmeier married Ross’s daughter, Hannah. Dallmeier had two sons with Hannah. After death Andrew Ross, Dallmeier received a large inheritance, and became financially independent enough to pay less attention to making telescopes, and do more lensmi. Dallmeier's research was aimed at making significant improvements to existing portrait and landscape lenses. 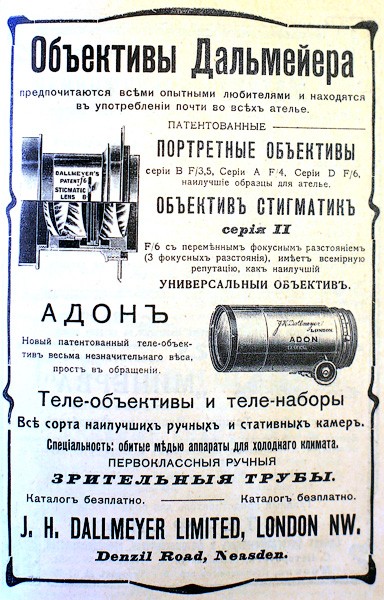 In 1860 he perfected the famous Petzval lens, and by 1862 his company was providing a large list of lenses from the entry to the highest level. One of the most interesting innovations of the inventor was the triple achromatic lens, which was practically distortion-free in use, and was used for photographing architecture and reproductions. Almost all of his portrait lenses were built on the principles and foundations of Professor Petzval's design methods. Dallmeier developed a photoheliograph telescope for the Russian and Harvard observatories in 1863-1864.

In the middle of the 19th century, three types of lenses were mainly used for photography - Petzval for portrait photography, meniscus for landscapes, and wide-angle "globes" (Ross Doublet). Dallmeier was the first to patent the aplanate in 1866, the lightest lens on the market. The lens was named Rapid Rectillinear. True, the production costs were so high that very few lenses were produced. In parallel, the development of an average between portrait and landscape was carried out, in viewing angles, lens.

As a member of the Royal Microscopic Society, Dallmeier worked to improve the collecting lens of microscopes. Its optical design of several concave and convex optical elements was received with a bang by this community. The last years of John Henry Dallmeier's life were spent traveling to exotic places in the hope of recovering health, which had been seriously undermined by tireless research. He died on a ship off the coast of New Zealand on December 30, 1883, at the age of 56. John Dallmeier's business came under the control of his second son, Thomas Rudolph.