Jupiter-8 1: 2 F = 5cm P is a universal normal high-aperture lens for rangefinder small-format cameras such as "Sharp", "Mir" and "Kiev". Equipped with a 9-blade iris diaphragm.

Lens Jupiter-8 is a Soviet clone of Carl Zeiss Zonnar 2/50... Recalculated in 1948 for Soviet optics and produced in various frame options, but all for rangefinder cameras. I was surprised at what an interesting picture this glass gives. Real focal length -52,43mm, equipped with a 9-blade diaphragm.

The Carl Zeiss Sonnar 1: 2/5 cm lens for Contax cameras was designed in the early 1930s by Ludwig Bertele. Documentation for many German lenses, along with the technology, materials and equipment for their production, were obtained by the USSR as reparations. At the beginning of production at KMZ, it was marked as "ZK" - "Zonnar Krasnogorskiy".

The lens has largely eliminated chromatic and spherical aberration and field curvature. Lens for rangefinder (mirrorless) cameras only. This lens is installed on modern SLR and mirrorless cameras through the appropriate adapter. Read the article about adapters. 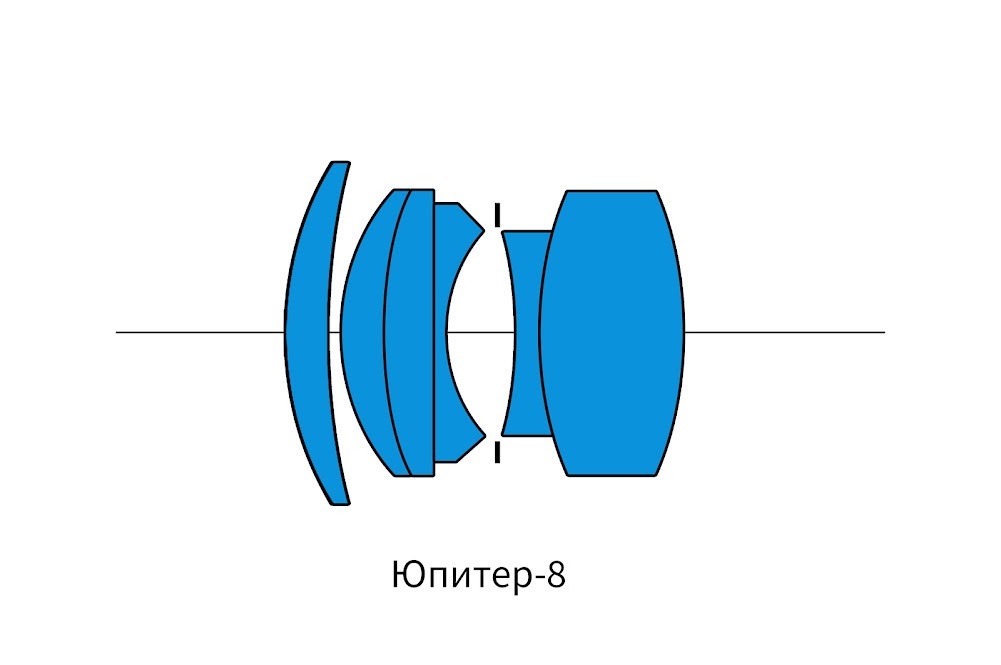 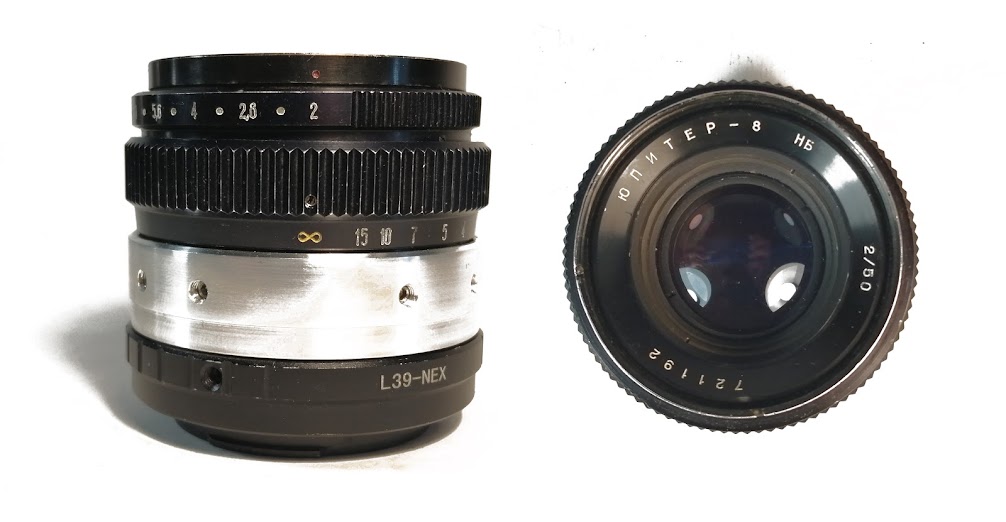 Unlike later-release lenses, the barrel indicates that the lens is coated (П). The front ring has Jupiter-8 1: 2 F = 5cm П manufacturer's number and logo... Later, they abandoned such a long spelling, and began to simply label “Jupiter-8 2/50 m39 #5949556, mirrorless manufacturer's number and logo»Enlightenment of deep blue tint on the lens. Krasnogorsk versions were marked by year, and, as a rule, even correspond to the numbers of the cameras on which they stood. 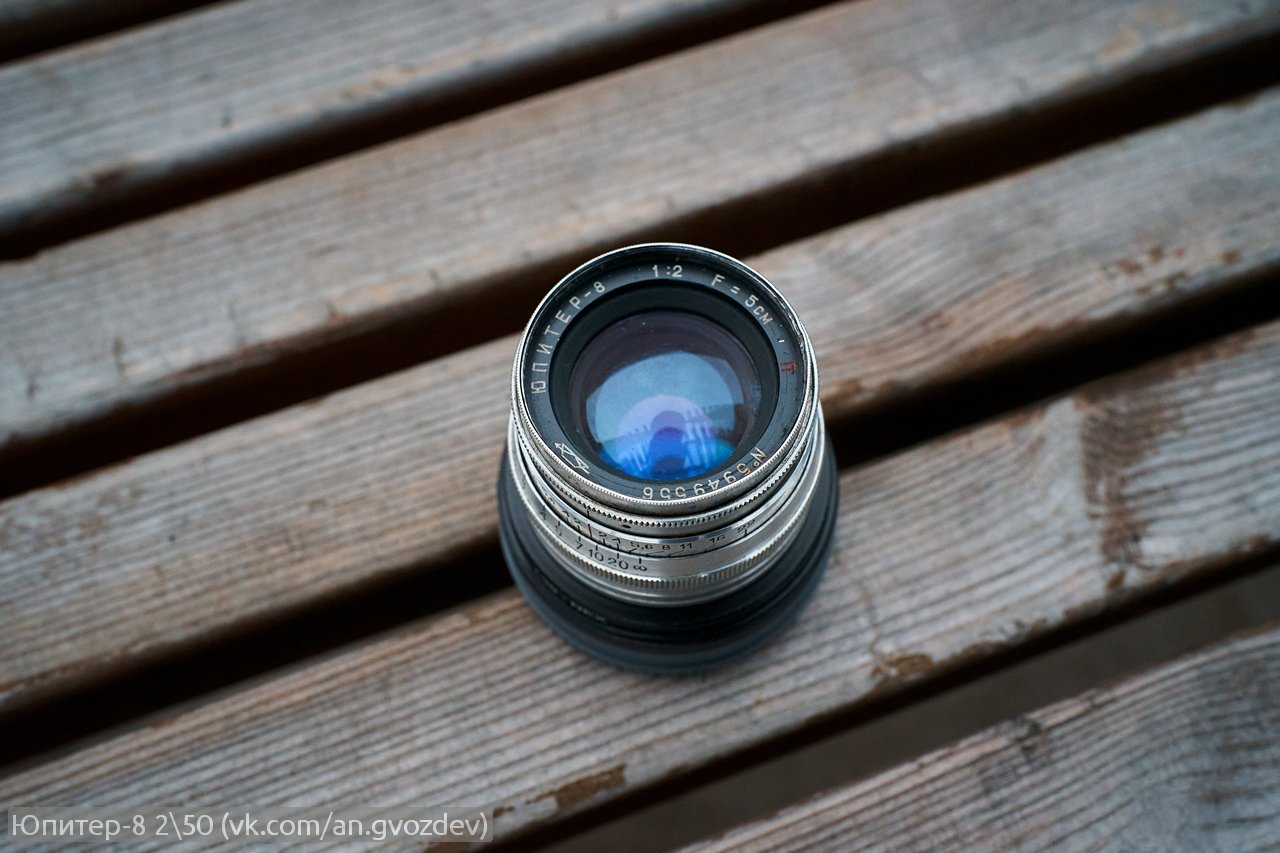 The minimum focusing distance is a little less than a meter on the scale. However, if you neglect the design, you can unscrew the locking screw, and further reduce the distance. The maximum aperture is f / 2, which will allow handheld photography at adequate shutter speeds in low light conditions without raising the ISO. By the way, at an open aperture, the lens gives off a veil. Veil, as an artistic technique, will help, for example, soften portraits, or give the frame a light airiness. Despite the veil, the lens is sharp and is sharp enough to be seen in full-sized images. Prior to this lens, I had encountered veiling only on faulty lenses, along with accompanying passengers, such as a drop in sharpness and a mass of chromatic aberrations. 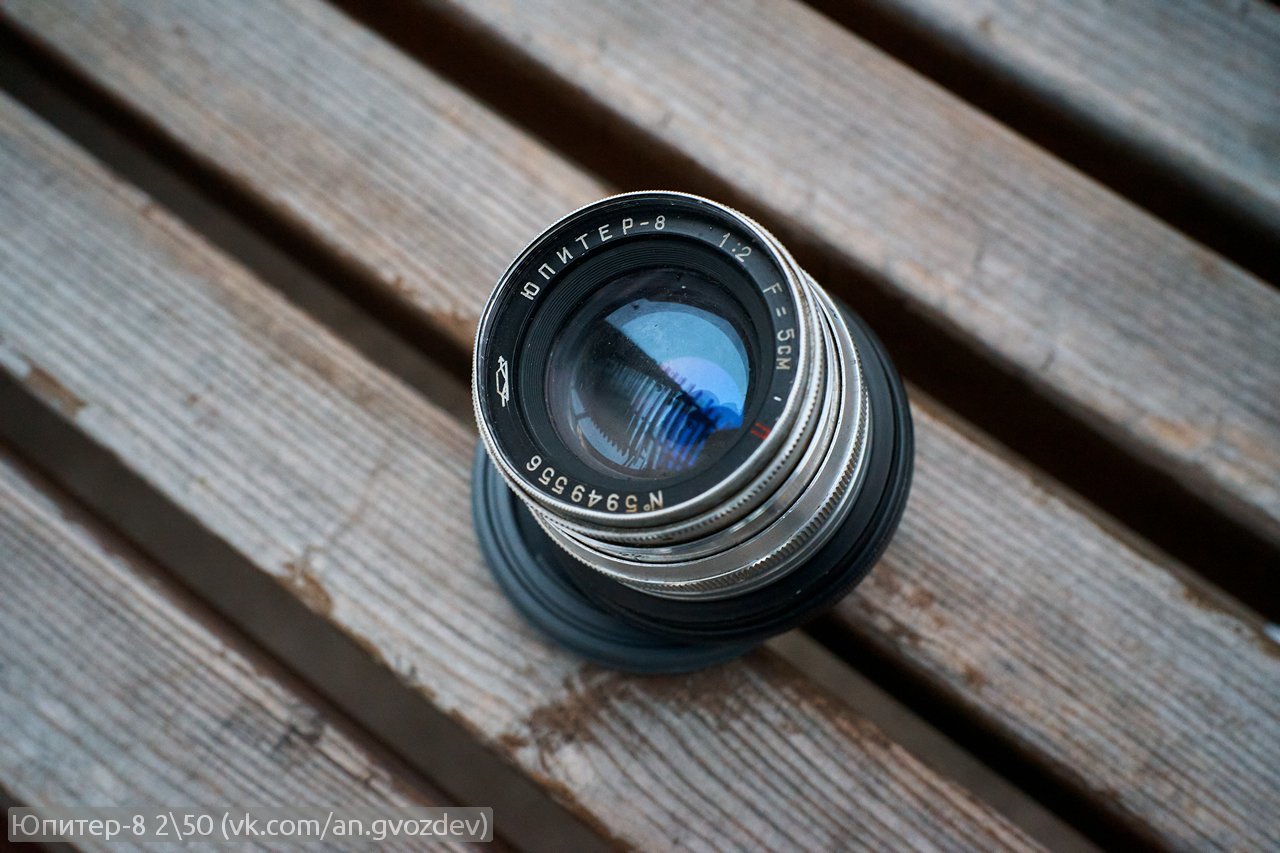 Open bokeh is a separate song. Not yet an ode, but already a song. Circles in the out-of-focus area have brightly defined edges, and the bokeh itself has a soft texture until bright and dark areas alternate, or light sources appear in the frame. Multiple light sources merge and turn into scales. I understand why some people don't like Sonnar's drawing. You get tired of looking at such full-size photos a lot. This effect is less noticeable on film. When processing, it is better to reduce the sharpness to avoid the annoying effect in bokeh. 9 aperture blades draw polygons at f / 8.

The color of Jupiter-8 P is interesting, it has a film coating. That is, the overall contrast is slightly underestimated for this optics. The same thing can be obtained, for example, from a digit in post-processing, just by raising the black point. 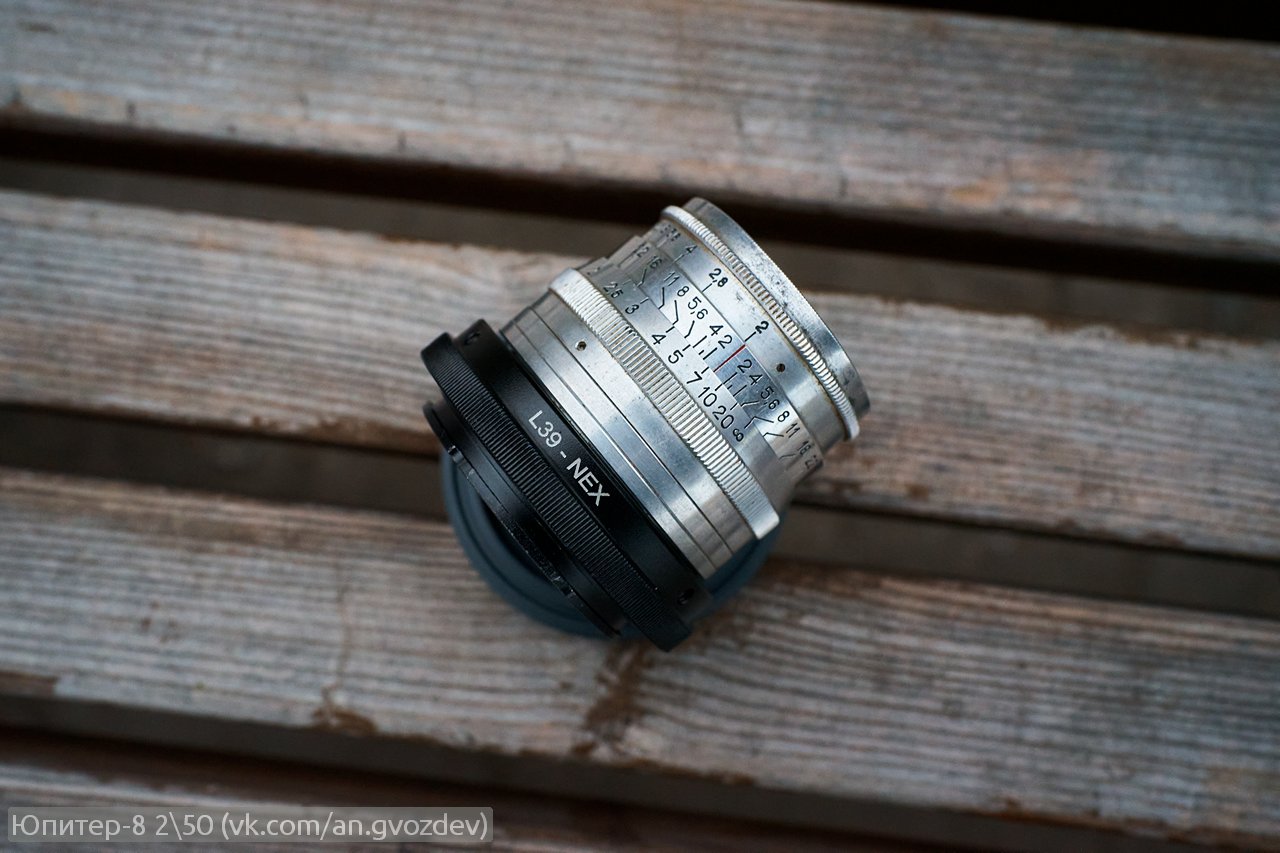 Sharpness is best, of course, in the center. The closer to the edge, the worse the sharpness. The effect is visible to the naked eye at both f / 4 and f / 6.3. In general, even at f / 11 there is not enough sharpness around the edges. However, with the right background, the lens flaws make for an interesting vintage mix. This is not an annoying twisting of Helios, but a softening of the picture along the edge. 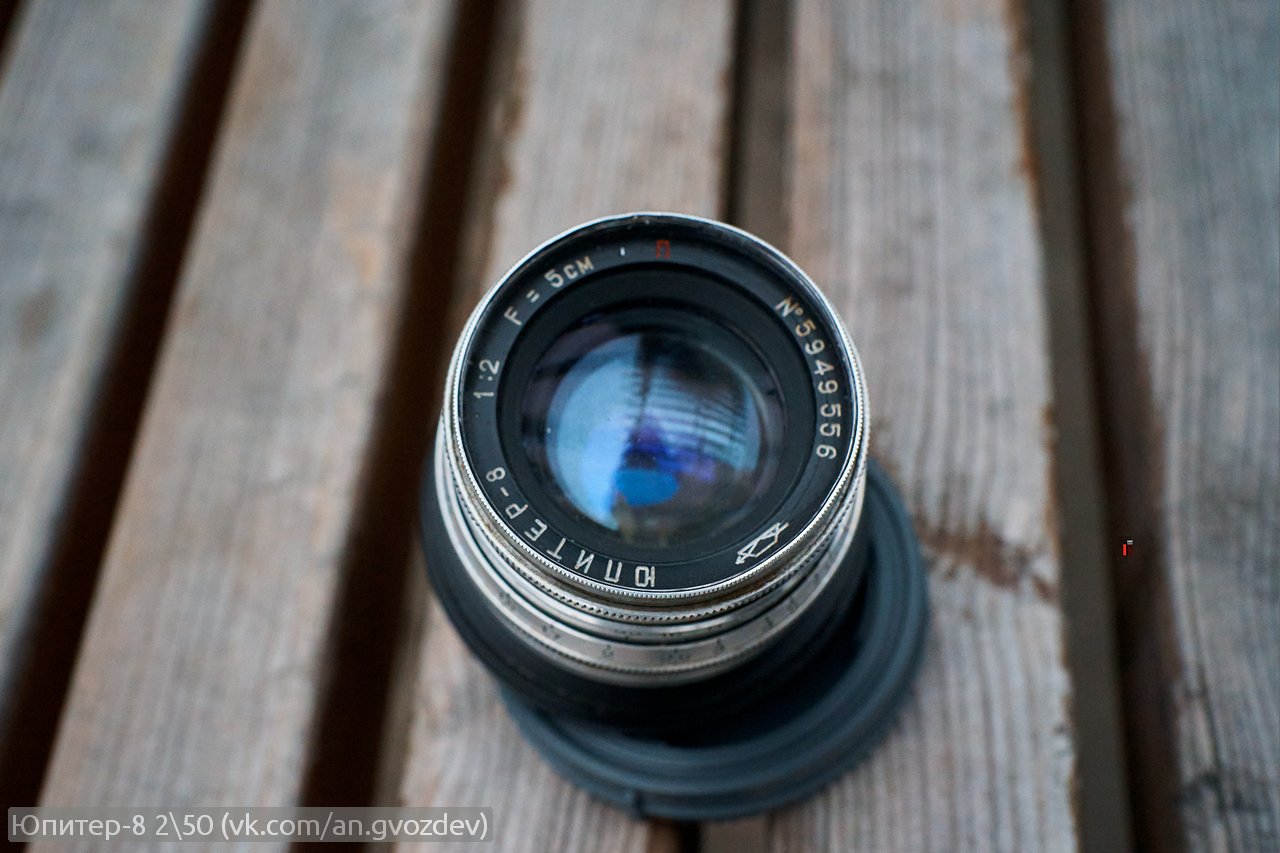 Lens control is manual, as well as aperture. There is no preset or any automation mechanisms, because this is 1959 (# 5949556). Very lightweight aluminum lens. Issue - Krasnogorsk Plant named after Zvereva. The rotation of the aperture and focus rings will be smooth if the lens is serviced. The easiest way is to get to the thread of the helicoid, it protrudes slightly if you remove the mounting ring from the bottom of the lens. And if you also unscrew the locking screw, you can completely unscrew the lens. The diaphragm ring cannot be easily reached without complete disassembly. You can improve the picture from the lens by blackening the back of the body. Thus, reducing re-reflections and additional illumination from the bright areas of the body metal.

Use on modern cameras 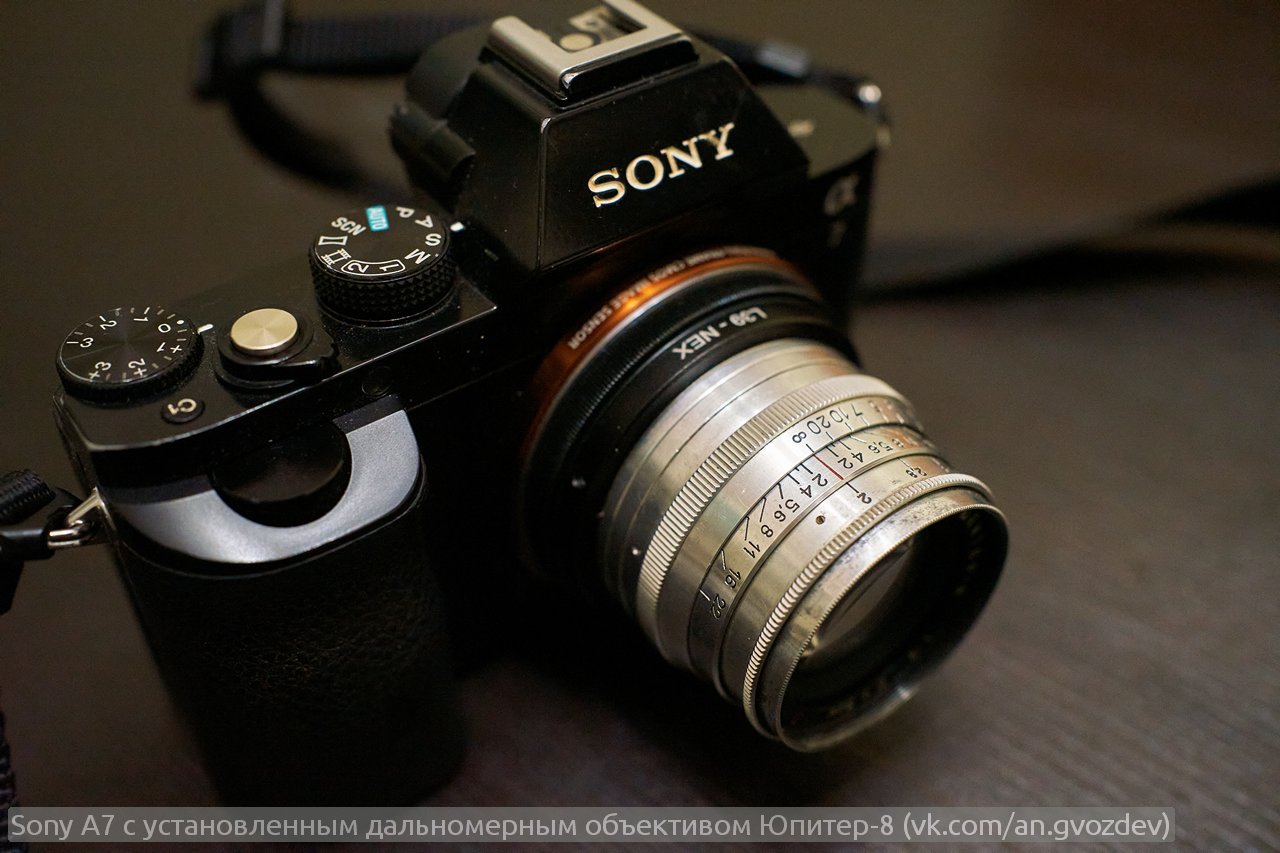 Attention! A Jupiter-8 lens on a 1.5 crop will have an angle of view equal to 1.5x50 = 75 mm lens for a full frame, and an aperture equivalent of f / 3. The total is 75mm f / 3. The easiest way is to install Jupiter-8 through an adapter to a mirrorless camera such as Sony NEX or Sony a7. Read the article about adapters.