Film digitization. Is free. Houses. Yes it is possible. But for many, it will probably not be a revelation. I wondered about digitization, and I had to shovel a bunch of information on the Internet to figure out how to do it the easiest way without a scanner at all. The standard offers are to buy a professional film scanner, or find a backlit consumer scanner, and not bother with a handshake. But this is too easy and expensive. In addition, the scanner, as it turned out, is not so easy to find. They are either old and slow or expensive. 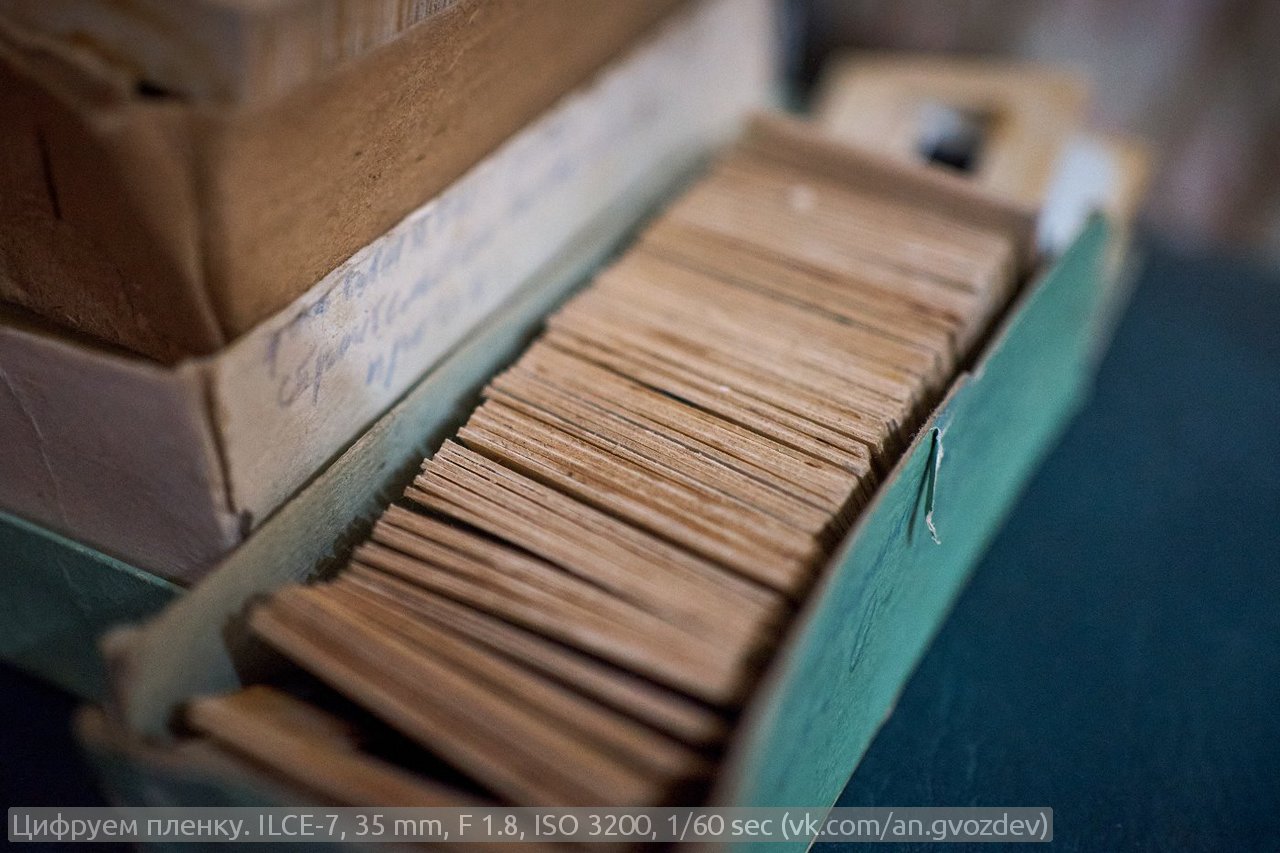 And somehow I don't want to try the quality of the only surviving lab with us. Considering the output, without the possibility of flexible color correction after digitizing. Since at that time the film was shot as if on a high, and even with a flash on the forehead, I wanted not only to reshoot with maximum sharpness, but also to be able to influence the color. In general, it turned out that in order to successfully digitize the film at home, it is enough to fix this film or slide properly, and reshoot the frame with a digital camera. For these purposes, the Canon 7D was first chosen, since the whale Canon 18-55 turned out to be the closest focusing of the entire zoo! 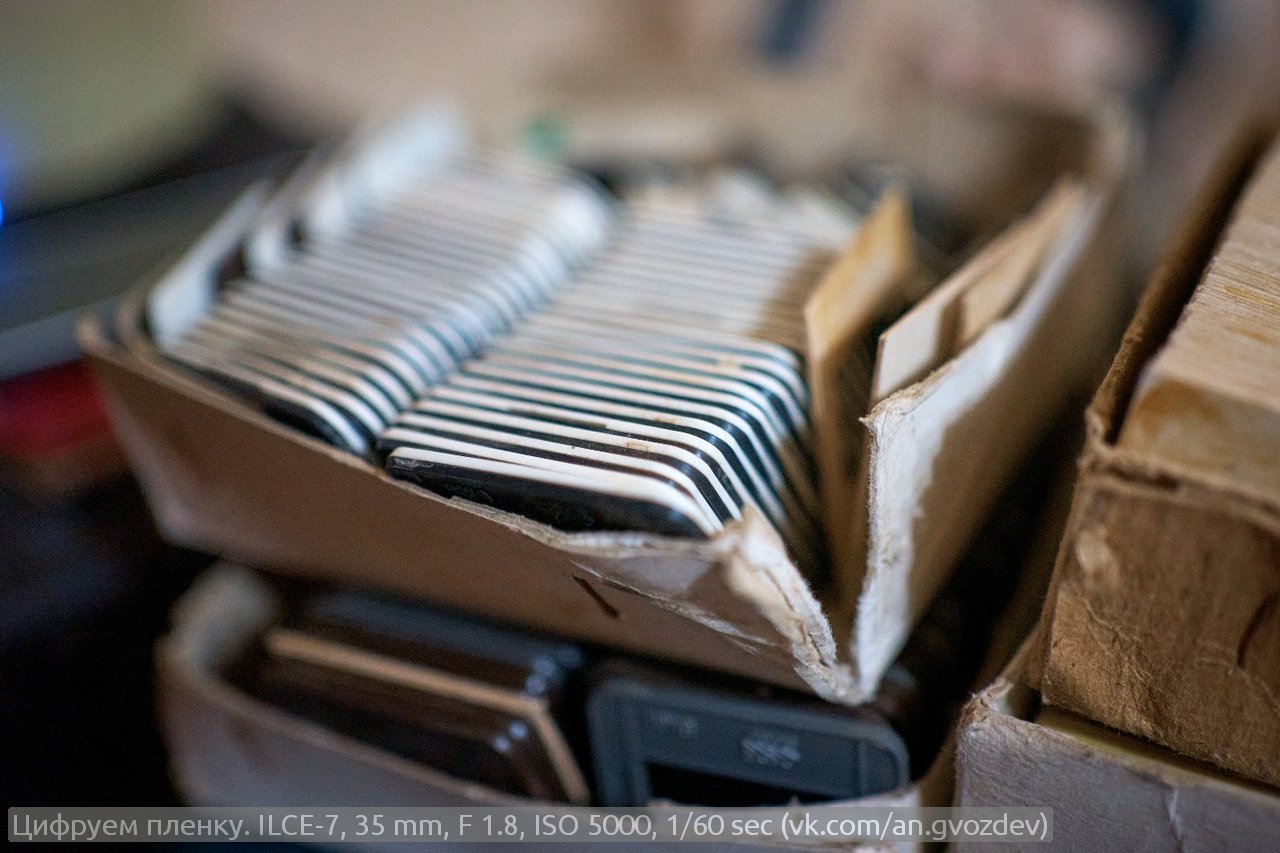 There are many other lenses out there, but unfortunately I got rid of the macro rings a long time ago. Then there is the problem of backlighting. At first I thought of using a monitor, including a white picture in the background, in order to avoid mixing colors as much as possible. I tried it, and it turned out that at the maximum zoom, the pixels of the monitor fall into the frame. Not an option. It is necessary to carry the film 5-10 centimeters from the monitor, and everything is okay. 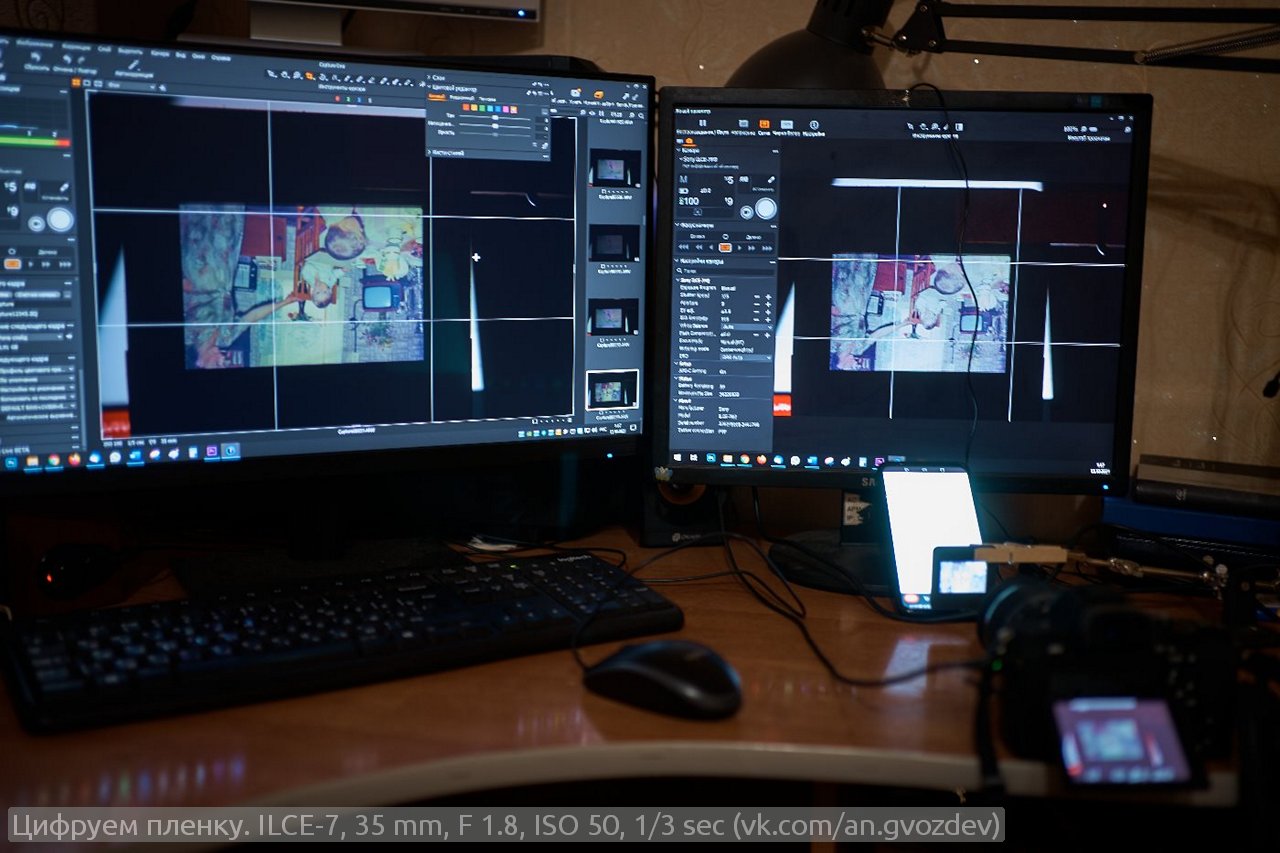 But it turned out to be inconvenient to use the monitor to illuminate it later, since there is no tripod for the camera. I put the camera on the table and attach the slides to an ordinary clothespin, then the clothespin to the crocodiles of the wire holder for soldering. Not everyone has such a tool, but it can be easily replaced with other mounts. I chose the smartphone's Ekran as a backlight. I set it at an angle. For convenience, I connected the camera to the computer and shoot directly on the computer. Aperture 9, ISO 100, manual focus. For the film, I made a fastener from a friend of two plywood with a slot in the middle, since it bends. 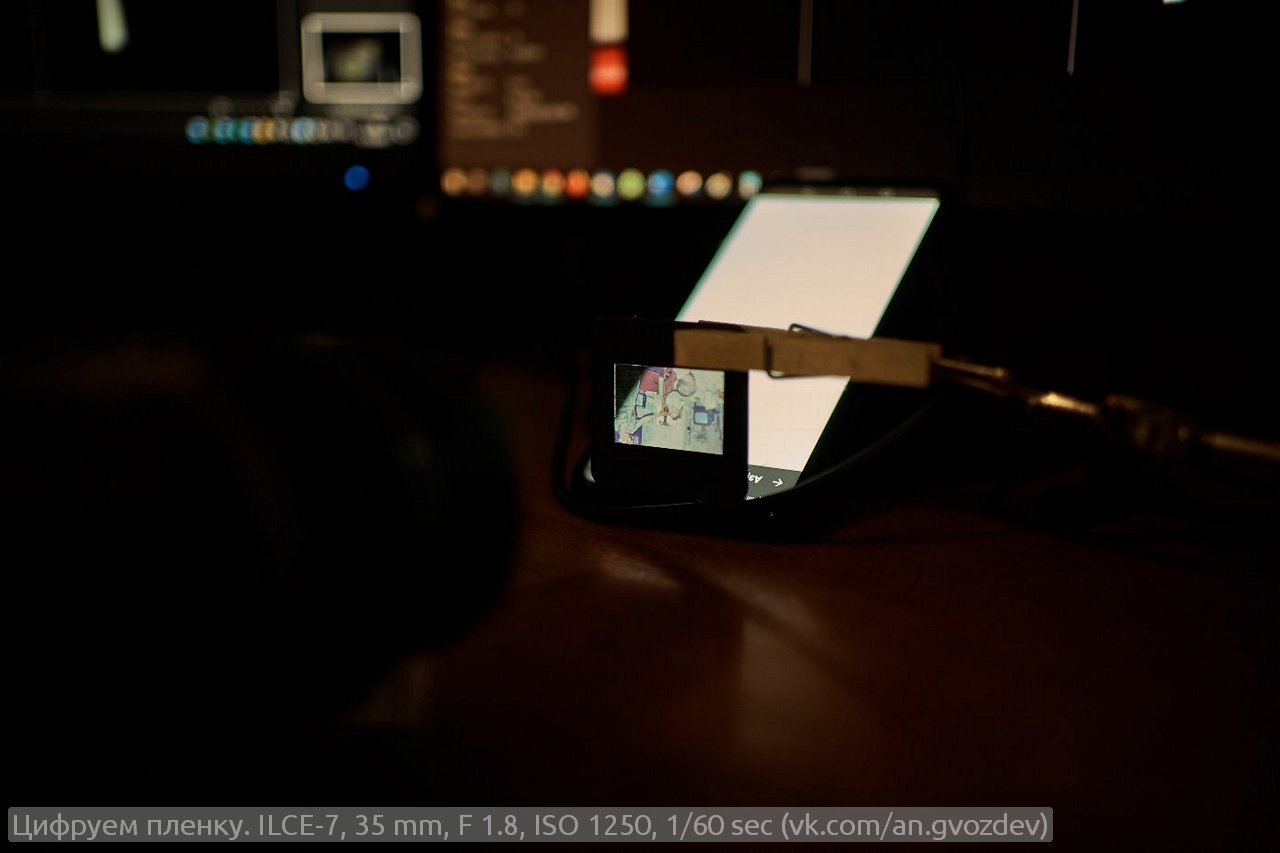 Later it turned out that with this type of shooting, everything is fine, except for the size of the resulting image. When cropping, the output turns out to be a picture with a size of approximately 1920x1280. 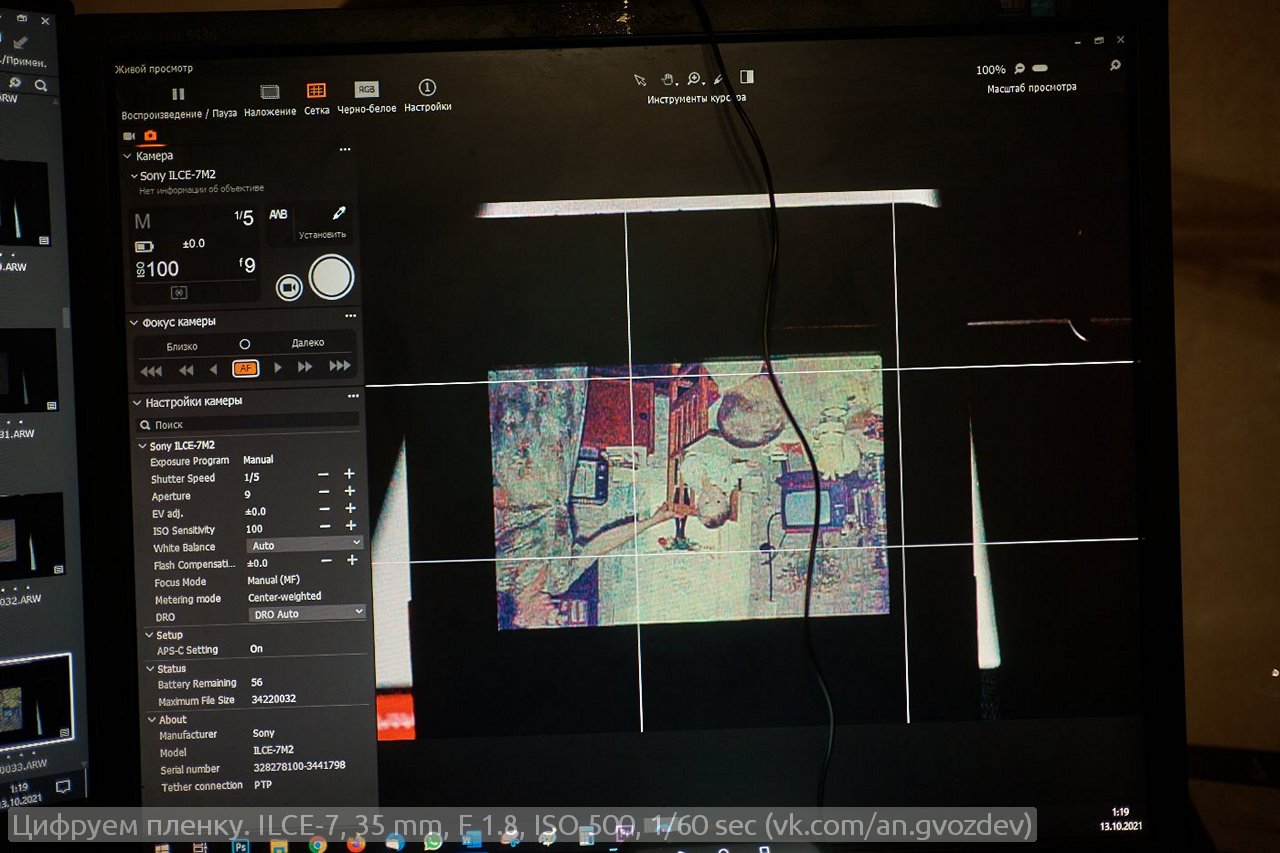 It doesn't seem like enough, and I want to try shooting with macro tubes and maximum magnification. However, you can already edit the color in RAW, get sharpness and then print even 20x30. 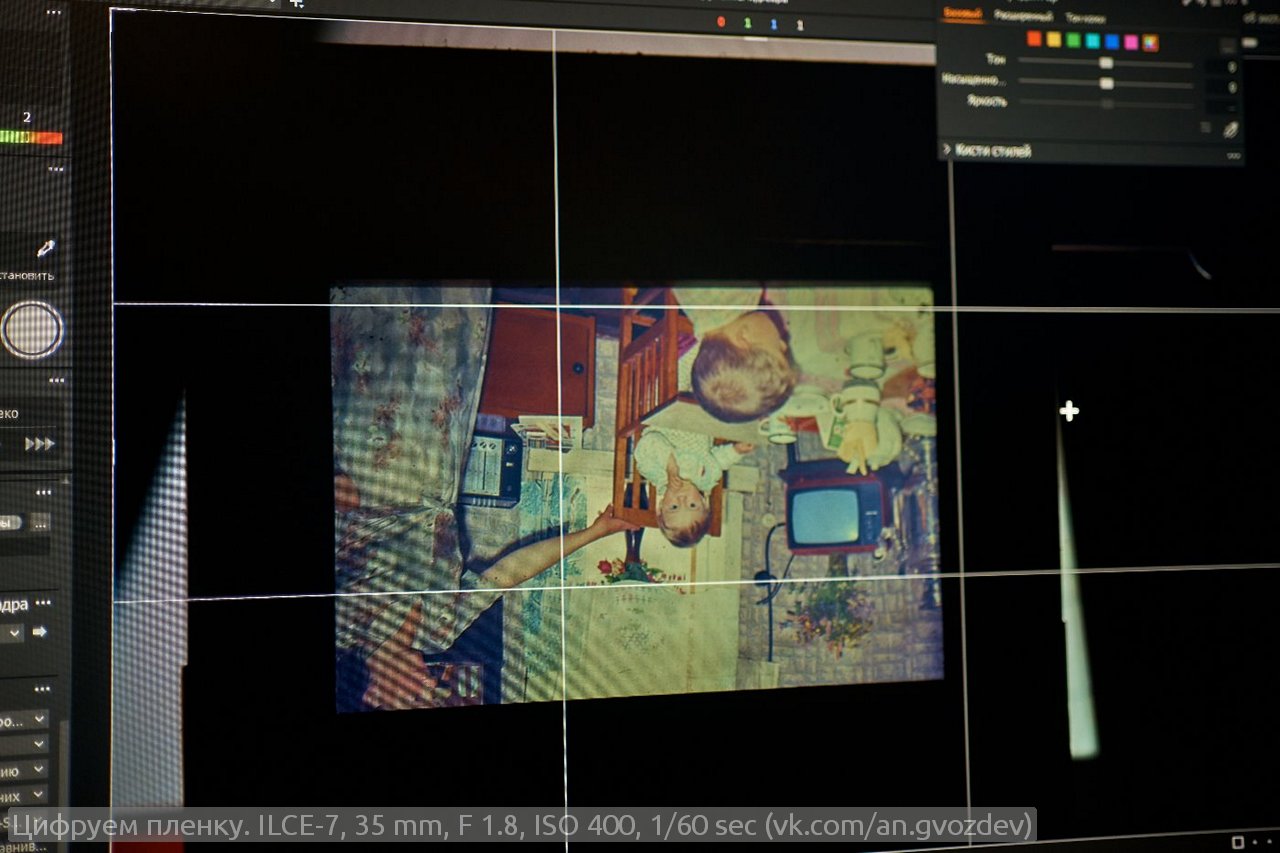 The camera shoots in RAW, JPEG is excluded from the program. Editing color, white balance, exposure, highlights and shadows. Correction of local deficiencies at will. The Canon 7D was replaced by the Sony A7M2, and then the A7. I got a small gain in the size of the resulting image. If there were 38-42 megapixels, then it would be possible not to delve into macro photography at all. Try it, you can do it too. The method is simple and effective.

It takes about 100 minutes to reshoot 40 slides, the rest 20 is spent on the color picker. In general, it suits me.