Industar 50-2 is a lens from the era of industrialization of the USSR. The most compact of all Soviet lenses for SLR cameras that were produced in the Soviet Union. Despite the miniature size and years of production, Industar 50-2 is able to give a high-quality picture on modern digital cameras.

Miniature Soviet lens, made according to the "Tessar" scheme. Industar 50-2 is a lens for SLR cameras with M42 screw connection. This lens is installed on modern SLR and mirrorless cameras through the appropriate adapter. Read the article about adapters... Industar-50-2 - the cheapest Soviet manual lens and is "Kitovym (kit)".

Industar 50-2 - standard lens for Zorky cameras, "ZENITH”, “Crystal”, which replaced Industar-50. Tessar-type coated four-lens anastigmat in a threaded frame with a non-retractable tube. Equipped with an iris diaphragm. For its time, it had high resolution with well-corrected chromatic aberration. Recommended for all types of shooting, including shooting on color film and for reproductions. It was also produced in Lytkarino (LZOS) and in Kazan (KOMZ). Options for photographic enlargers (the lenses were marked with the “U” index) were produced by LZOS and FOZ (Feodosia Optical Plant). On later versions of lenses made in the USSR, the year of manufacture of the lens can be found on the basis of the first two digits of the serial number stamped on the bottom of the focus ring frame.

The lens is made according to the "Tessar" scheme. High sharpness, minimal aberration. 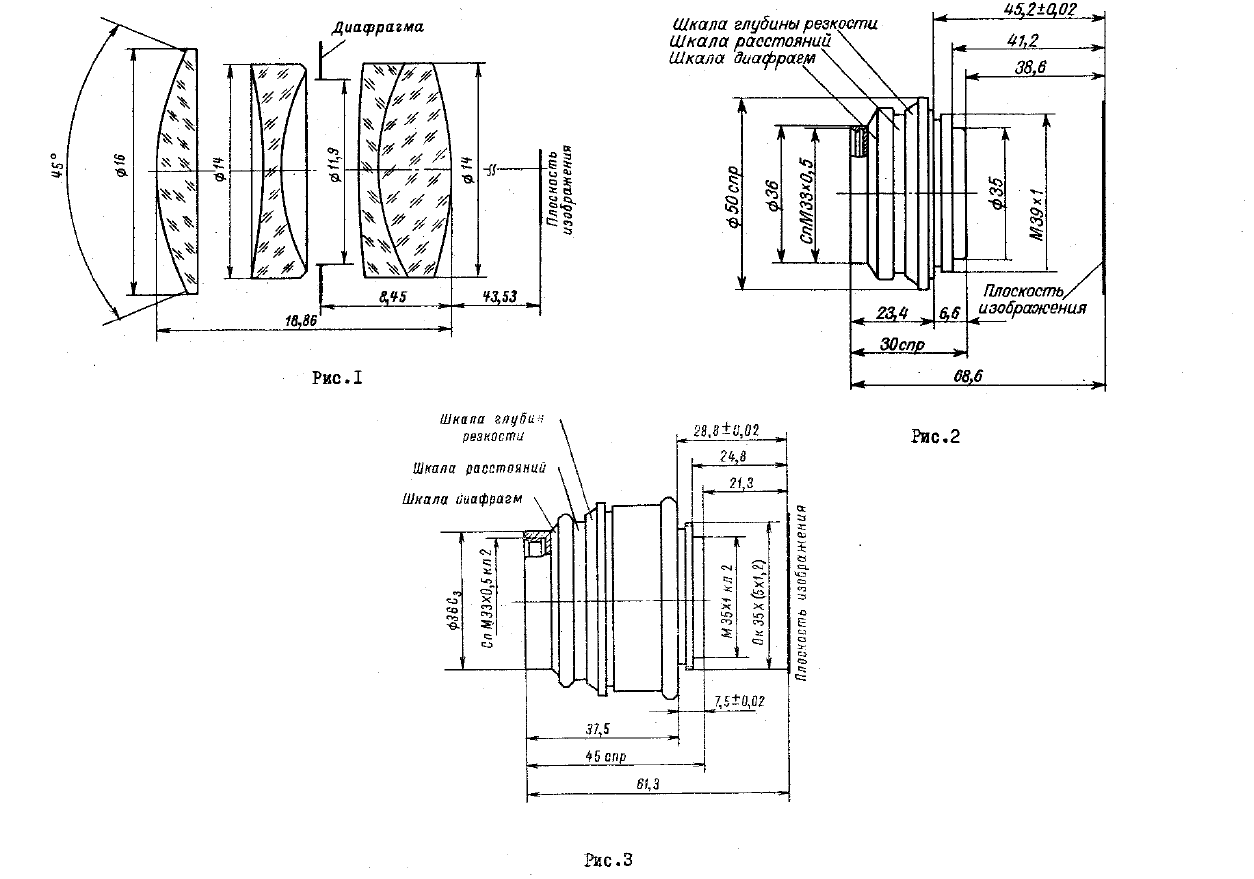 First issues known Industar-50 with 8-blade diaphragm... Rangefinder Industar-50 can be installed without modification only on mirrorless cameras. Industar-50 for SLR cameras with M39 thread has a slightly smaller flange distance, and its installation is possible on M42 through an adapter ring from M39 to M42 threads. The rangefinder version of the Industar 50-2 could easily be rearranged to the early Zenit cameras with M39 threads by removing the rear part and the rangefinder pusher. Also, Industar-50 is known in versions for photographic enlargers. No multi-coated lenses (MC) were produced.

The lens aperture is controlled by a ring located on the front of the body. The diaphragm consists of 7 blades, and at narrow values, in the out-of-focus area, "nuts" will be noticeable. Maximum diaphragm Industar-50-2 - f/3.5. At the same time, shooting with Helios-44 on a similar aperture, the picture turned out brighter and juicier. The lens is dark. With this lens, you will have to enter exposure compensation into the camera electronics, or shoot images in RAW. Perhaps the use of a hood saves the situation, but I did not have a hood at hand. Why blends? Because the lens draws reflections on the matrix, even in the light of a flashlight. They are visible when the focus ring is rotated.

Despite the large depth of field, focusing on cameras with a small viewfinder can lead to problems with hitting the target. You have to use LiveView mode much more often than with autofocus lenses. As an alternative to LiveView, you can use the distance scale and depth of field of the lens itself, or adapter rings with a focus confirmation chip (more expensive). Industar 50-2 can be set to hyperfocal distance using the depth of field calculator applied to the body, and removed without touching the viewfinder eyepiece. This is useful, for example, in street photography.

The Industar 50-2 corrects or minimizes aberrations such as astigmatism, spherical and spherochromatic aberrations. The tessar scheme itself implies high sharpness and minimization of various aberrations. On the open aperture of Industar-50, I noticed a slight green coating on the borders with contrasting transitions. So light that it can be neglected.

At the widest aperture, the Industar 50-2 has strong vignetting in the corners of the frame. Disappears already by f / 4. On a cropped camera, it will not be noticeable at all.

At the open Industar 50-2 there is a slight drop in sharpness towards the edge of the image, which is eliminated by deviating the aperture ring half a stop in the direction of narrowing the aperture. Industar 50-2 does not like bright backgrounds, local light sources in the frame. Open/5.6:

The gripe is the location of the aperture ring. In view of the small dimensions, the location of the diaphragm ring causes great inconvenience in operation. Such an arrangement of small rings one after the other, as on the Industar 50-2, forces you to be distracted to set aperture values. All the lenses that came across suffered in one way or another from the problems associated with the miniaturization of the controls. To work with unmaintained lenses, both hands must be used. 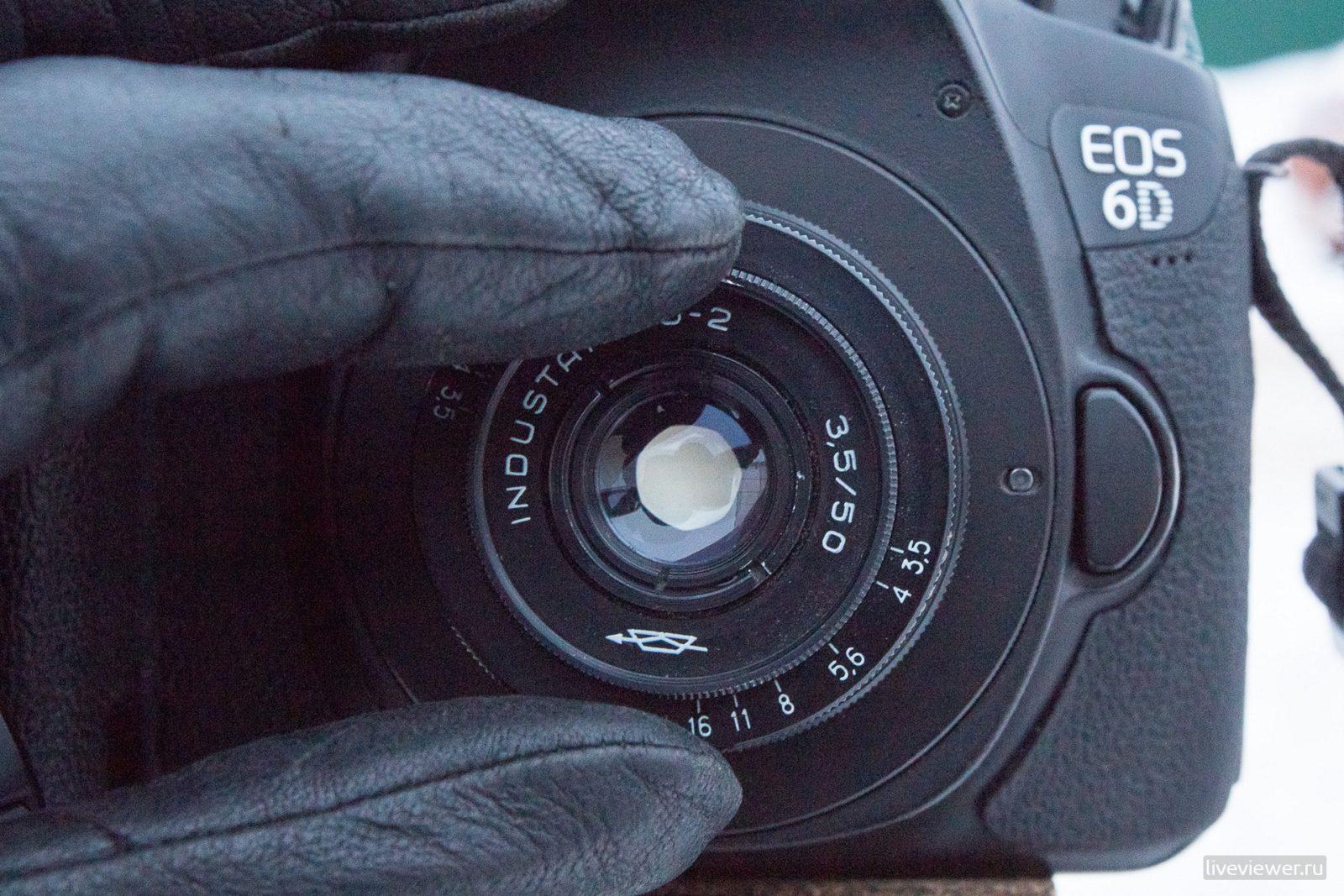 With one hand you have to hold the focusing ring, with the other you have to set the aperture. 70% area lens occupies the focus ring. 15% - on the base and diaphragm ring. It is worth being patient and adapting in order to achieve more or less precise lens control “on the fly”. Build quality has complaints. The gaps of the rings are felt, because of them something interesting happens:

To be honest, although Industar 50-2 is built on the same principle as the tube Industar-50 or Industar-22, it is more convenient to work with the latter. Industar 50-2 is easy to disassemble, does not require special skills other than attentiveness. When disassembling, pay attention to the blackening of the case. The slightest wrong move with a screwdriver, and the paint peels off. The inscriptions on the frame are engraved and painted over. Colors may vary. I came across both with yellow, green and white inscriptions.

The main trump card of the lens is its small dimensions and scanty weight. The Industar 50-2 lens weighs only 112 grams.

Use on modern cameras

On a camera with APS-C sensor (kf = 1.6) the camera will have a field of view equal to the equivalent 80mm focal length, and the aperture will correspond to the value f / 5,6... Why is that? Because, firstly, because of the narrow viewing angle, you will have to move further. Secondly, the camera's sensor receives 1,6 times less light than a full-frame 35mm sensor. Thirdly, although this does not apply to the previous two statements, the lens on the crop has a drop in sharpness due to the denser arrangement of pixels on the matrix and their concentration in the center of the lens.

On a full frame, the lens works as intended - it has a more flexible picture and characteristics corresponding to the declared ones.

The easiest way to shoot is in the mode Aperture Priority (Av)when the camera adjusts the required shutter speed based on the current aperture value and the light in the frame. To work on digital cameras, you need an adapter from the M42x1 threaded connection to your camera. Industar 50-2 3.5 / 50 it is easiest to put on Canon EOS with EF (-s) mount, due to the insignificant difference in focal lengths. Adapters without focus confirmation chips on Canon are cheap.

Has a 45 degree field of view, standard lens. Vignetting will be observed around the edges of the frame at wide apertures.

Will have an angle of view equal to a 73mm lens for a full frame. The vignetting of Industar 50-2 will not be noticeable, the depth of field will slightly increase, the blurring of the background will decrease. All other parameters lens will not get worse. Permissible to use for portraits and reproductions.

The main probable application of Industar 50-2 is for shooting bust portraits, shooting on a hike (when weight matters). The lens is not suitable for video shooting. management is far from the best. The alternatives below are a legacy of yesteryear that is still in use today.

Helios of any modification will have better artistic characteristics due to the working wide aperture of f / 2, and older Helios models are more resistant to backlight.

Rare, true German quality from the 60s-80s. With a perfectly circular 13-blade diaphragm, and a sleek design.

It is a good choice for leisurely shooting portraits with shallow depth of field and artistic background blur.

Made according to the "Tessar" scheme, has a sharp and clean picture, good sharpness, easy to handle, lightweight. Widespread and cheap.

Not a bad, "first easy fix" for a novice amateur photographer, if you close your eyes to the shortcomings of the controls and the darkness of the image. Its shortcomings in ergonomics do not diminish its merits in the least - the lens perfectly fulfills its direct functions. Given the low cost on Internet sites, it regularly finds its owners for a long time.