AGAT-18 is a scale semi-format camera of the BelOMO association, designed for beginner amateur photographers.

AGAT-18 and his older brother, Agate 18K were produced at the Belarusian Optical and Mechanical Association. BelOMO did not actually produce the cameras themselves, but were more like the managing organization of two Belarusian optical factories - MMZ and the Zenit Vileika plant. On the camera from the review there is the BelOMO logo, while on the Agat-18K added earlier, you could see the logo of the Vileika plant. The AGAT-18 camera is a miniature camera for a common type 135 film (36x24mm), but shooting on half of it. The camera gives the original film format of the frame. Even a little more. By modern standards, the frame format Agat-18 and AGAT-18K is a crop of format APS-C. The number in the title, I think, is exactly what it means. Agat-36, according to this logic, would be a full-frame camera. 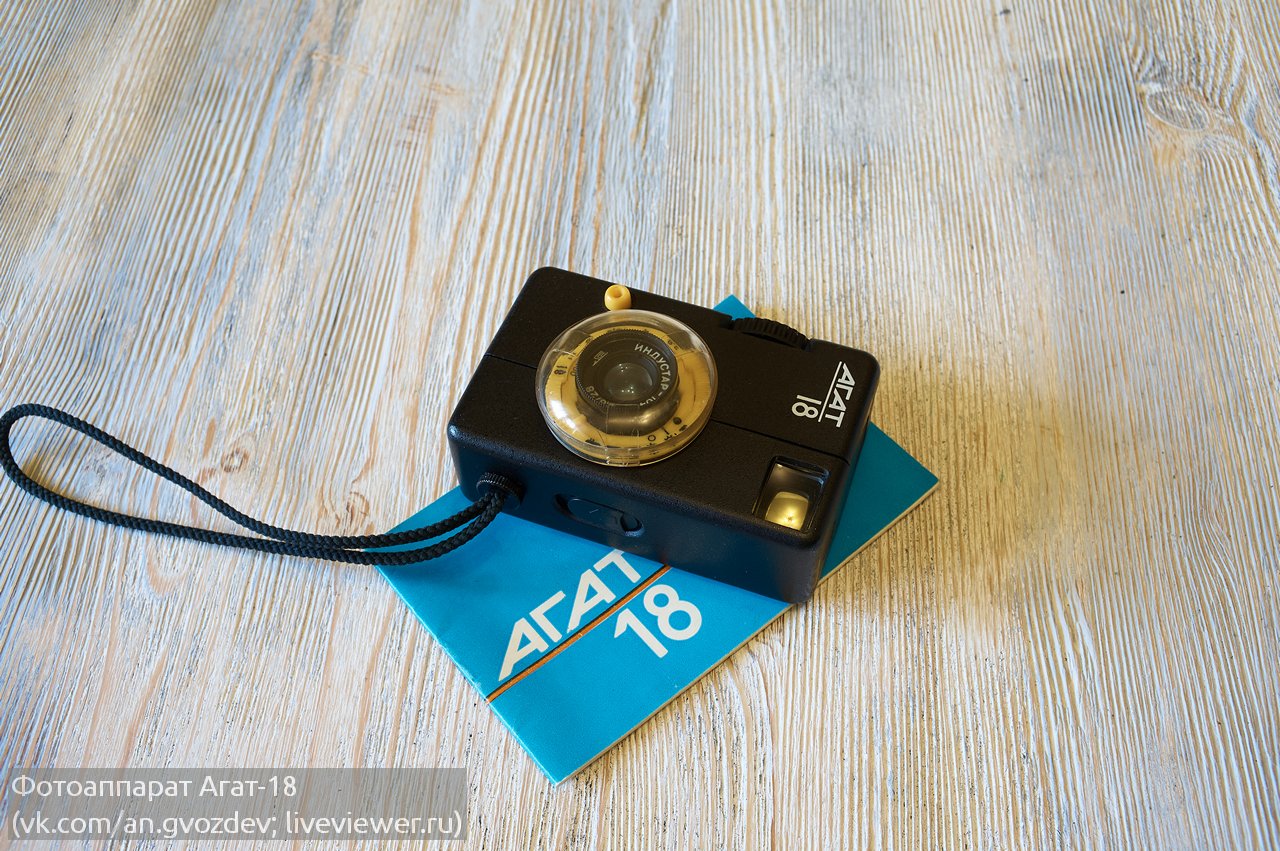 The concept of semi-format cameras allows not only to reduce the size and weight of shooting equipment, but also to save space on the film, since for common formats 9x12 and 10x15, a frame size of 24x18mm is more than enough if the lens is able to provide sufficient sharpness in such a small area. And the regular Industar-104 2.8 / 28 is quite capable of this. By the way, in terms of 35mm, this lens is not wide-angle, but close to 50mm focal length, that is, to a normal lens with an appropriate viewing angle.

Lens "Industar-104" 2,8 / 28, non-removable. Focusing on a distance scale from 0,9 m to infinity. There is a depth-of-field scale, and resolution: 40 lines / mm in the center of the frame, 22 lines / mm at the edges. The little protrusions on the plastic ring above the focus distance are the depth of field marks for 5 different apertures from 2,8 to 11. The manual doesn't mention f/16 as the camera's range will presumably be in focus at that size. 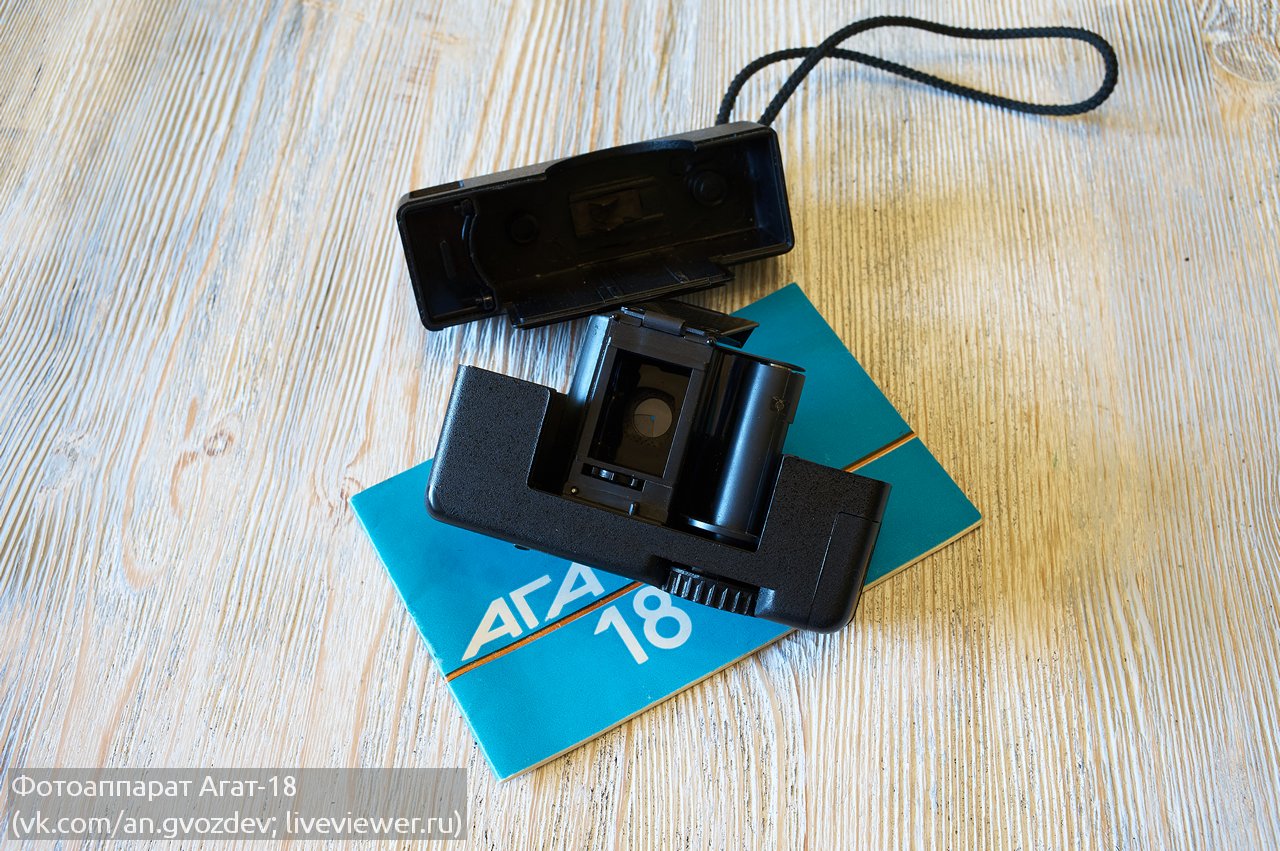 AGAT-18 is a camera that you can carry with you and take on trips. Camera control is simplified as much as possible - focusing, as well as setting the aperture, are replaced by situational icons. Focusing, in principle, can be inaccurate, since the lens displays the maximum possible space as sharp. The camera also involves the use of photographic films of various sets of photosensitivity. In Agat-18, you can select a sensitivity in the range of ASA 16–250. This ring is very difficult to turn and required a lot of effort. 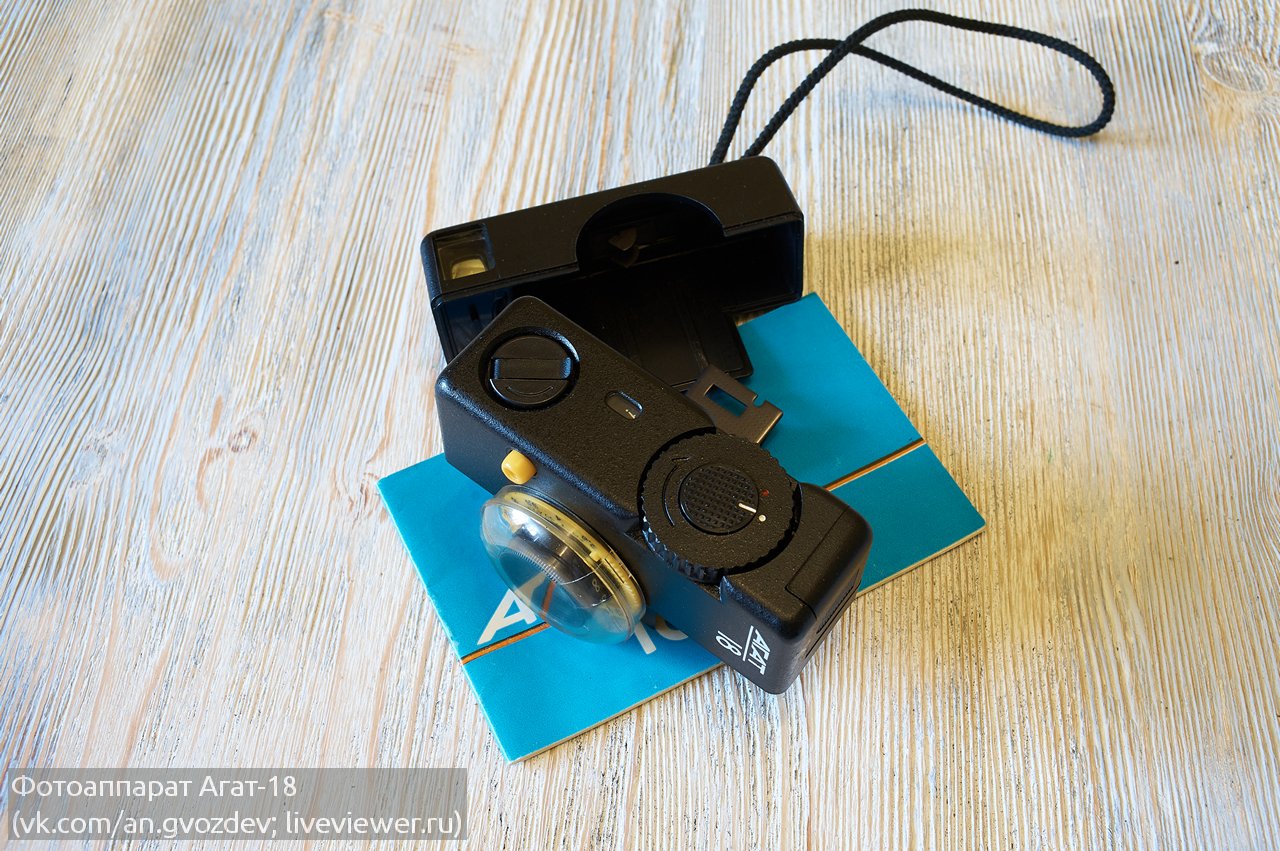 The AGAT-18 shutter performs the function of a diaphragm and has only two petals. Aperture setting is rigidly related to shutter speed, and does not require adjustment. Exposure compensation, as such, can be made by rotating the film speed ring. But this is for the experienced. In general, in this camera you can set shutter speed and aperture using an external exposure meter, since the range of shutter speeds that can be worked out is quite wide. On my copy, the shutter, after the first in 15 years since the last shooting of the platoon, stopped closing completely - the spring was tired. I had to disassemble the camera and repair the shutter. In principle, nothing complicated.

The cocking of the AGAT-18 shutter is combined with the film advance, is activated by a wide dial on the body, and is possible only in the presence of a film. The film itself is installed under the pressure metal table. Not quite obvious film loading for those who hold the camera in their hands for the first time. The film is loaded into the lower compartment at the shutter side, pulled over the film stage, and attached to a non-removable take-up spool. 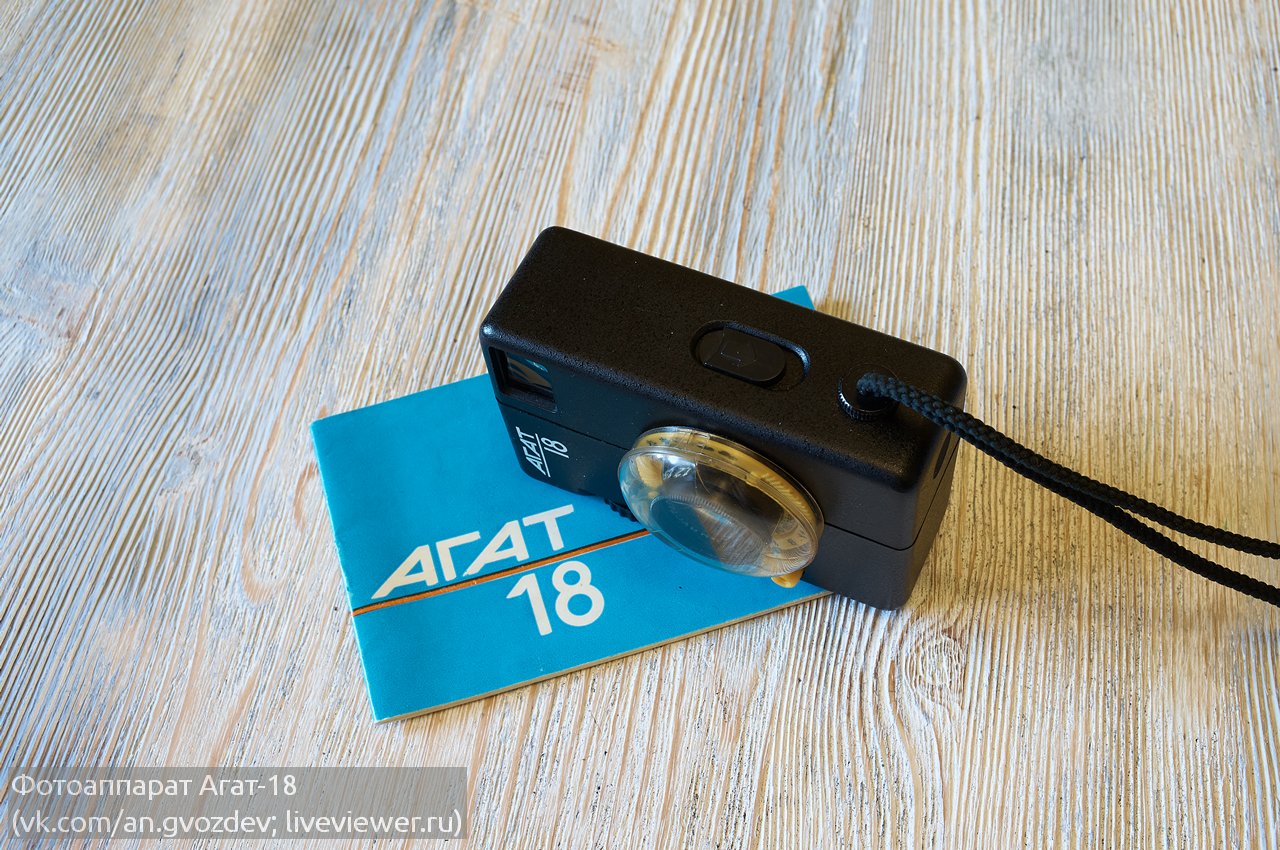 Closing the AGAT-18 requires careful alignment of the two halves of the chamber, making sure that the pressure plate remains closed, that the film cassette or take-up spool does not fall out, and that everything between the two halves is perfectly aligned.

The viewfinder is surprisingly large and bright, with illuminated bezels for the 28mm and parallax marks for close focus.

The AGAT-18 even has a flash hot shoe that syncs at all shutter speeds. In order to hide the shoe under the plastic plate, it was necessary to drown it into the camera body. This prevents both Nikon and Canon Speedlite from being installed. But I would look into it. 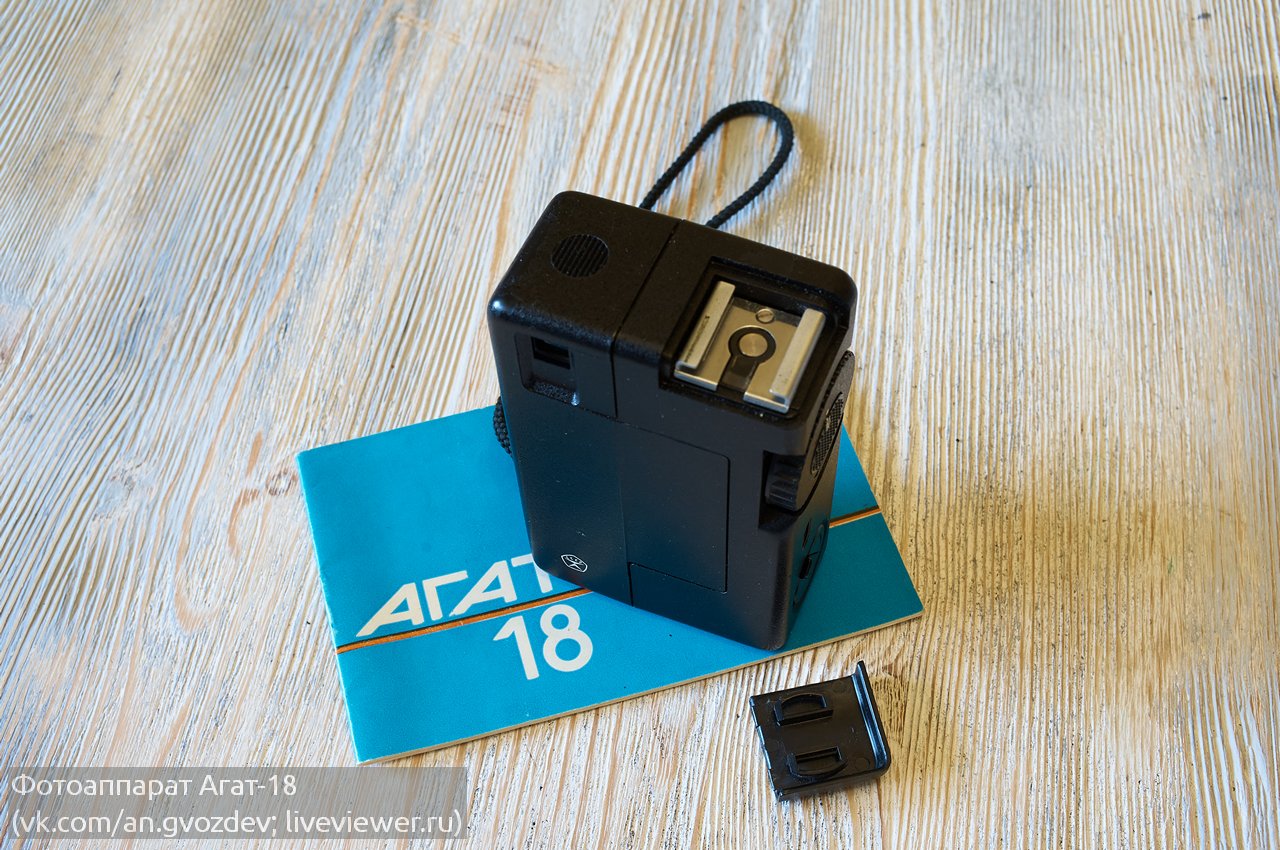 The body of the camera is plastic, not Bakelite. Invoiced. In this regard, the camera, of course, is less reliable than metal small-format Vega, Kyiv, Chaika, etc. The shutter button has a hole in the center with a cable thread if you want to shoot at the slowest shutter speed. Long shutter speeds usually require some kind of stabilization, for example, a tripod mount - a camera carrying cord is screwed into the seat under the thread of the tripod.

Agat-18 is a curiosity in the history of the Soviet camera industry. A large number of Soviet cameras were based on existing designs or were direct copies of them. FEDs, Zorki, Kiev, Moscow - they all owe their developments to someone. As for the cameras of the original design, most of them were unremarkable scale cameras. Of the few that were ambitious, the Starts, Leningrads, and Horizons all seemed to have come from an earlier time, when Soviet industry was at full blast.

The total output of devices of the “Agat” family, produced by the BelOMO association, from 1983 to 1991 inclusive amounted to 1 copies. The cost of the Agat-422 camera in 000 was 18 rubles. After the collapse of the USSR, about 1987 more devices of the model were produced in Vileyka. The device numbers are coded.

Both "Agat" and "AGAT-18K" were intended for children and students, and the price of 19 rubles reflected the target audience. The correct conversion factor for rubles to US dollars in 1987 is that 19 rubles were equivalent to 31,66 dollars. Then, using the CPI Inflation Calculator, we derive the equivalent of $68,58 today.

In export versions of Agatha, all text on the camera is written in English letters. They are very rare and quite collectible. Today, "Agat 18" and "AGAT-18K" have few fans among enthusiasts. The camera is unique in its ambitious content with functions that do not immediately catch the eye, and despite its plastic body, it is able to take high-quality shots.