Zenit-312M is the brainchild of the Krasnogorsk Mechanical Plant, produced from 1999 to 2005 in Russia.

It is not unreasonably considered a restyled version "Zenit-12SD”(In the export name - Zenit-12XP), in which LEDs were used in the exposure meter indication, instead of the pointer of the earlier models. The striking difference from its "parent" in Zenit-312M is a plastic case and a matte focusing screen with wedges in the center. 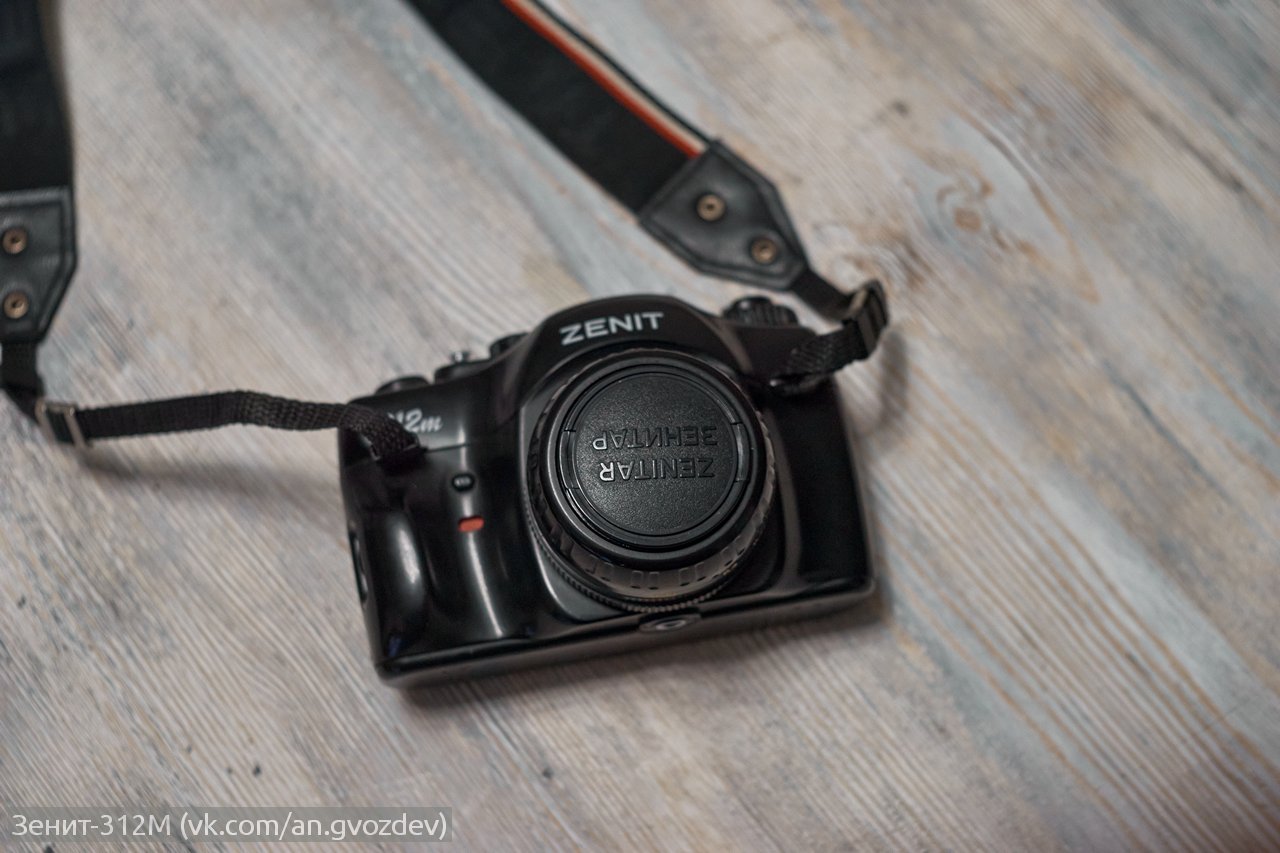 The following Zenits models were also made of plastic: 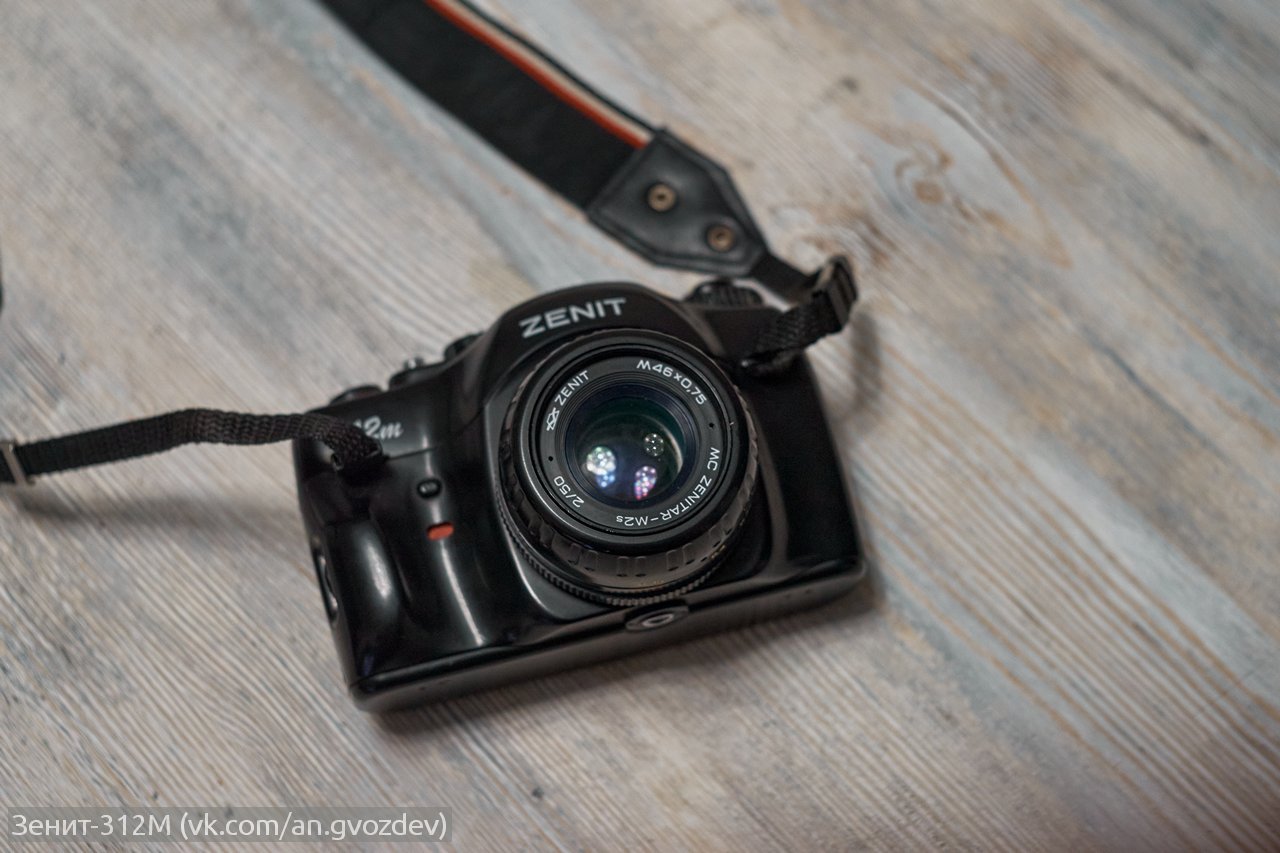 In general, the controls in the Zenit-312M remained in the same places (as in the old Zenits), however, the use of plastic in the hulls caused more indignation than any growth in sales. After some time of active use, the updated model loosened up, loosened and took the form of a cheap craft. Than, in fact, and failed sales. The shutter and mirror drive mechanisms also plastic parts applied. 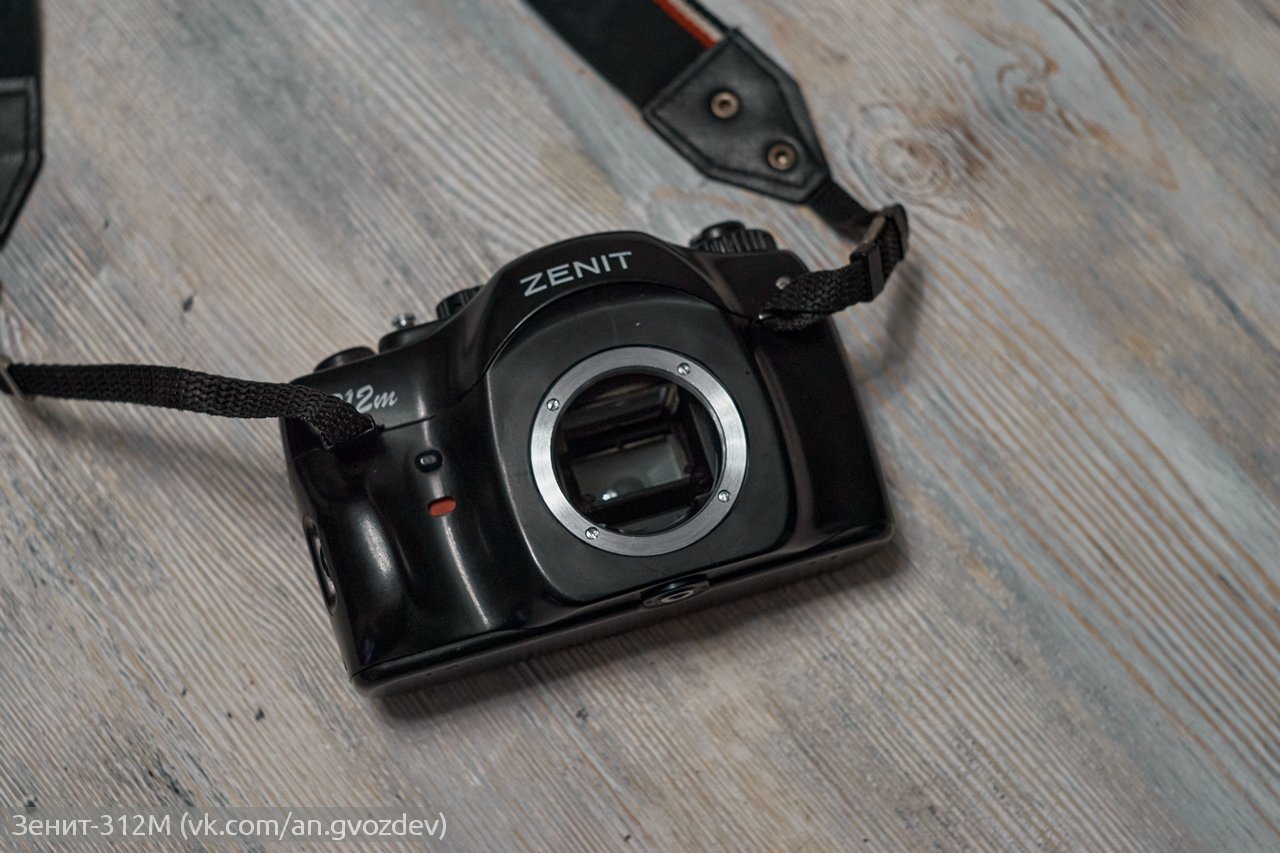 Zenith-312M used the old mechanism for setting shutter speeds, their set does not differ from the entire previous Zenith line. Shutter speeds B, 1/30, 1/60, 1/125, 1/250 and 1/500. Light meter like Zenit-12SD, LED indication. The handle for winding the film opens the back cover, and itself is recessed into the seat, which is combined with the disk for setting the photosensitivity. The shutter cocking lever simultaneously also winds the film onto the receiving mechanism. To activate the rewind mechanism, press the button next to the release button. The exposure meter is suitable for batteries of size AG12, AG13 (LR43, LR44). The exposure meter is activated by half-pressing the shutter release button, and the pusher mechanism simultaneously closes the aperture on the lens. There is no ISO setting by DX code in this model. 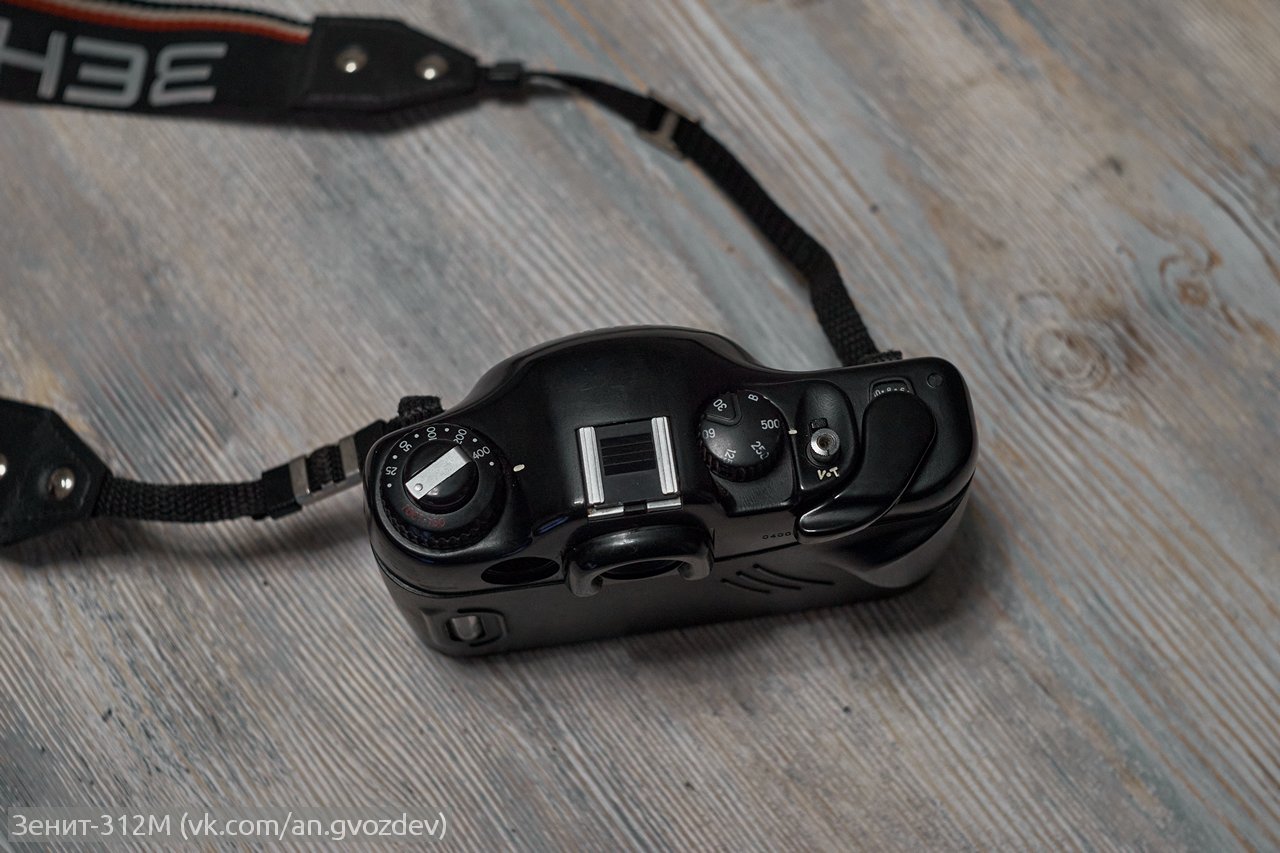 It feels strange in the hand, the grip and the protrusion on the back of the lid are "sharp", and in my opinion, frankly uncomfortable. It would be better if the bezel-less panels remained. The eyepiece window is framed by a plastic eyecup. The viewfinder, although bright, still covers a small area of ​​the frame, and the mirror breaks off and falls back. Only, unlike previous models in a metal case, it is felt many times stronger. In general, the camera gives the impression that it was made in a hurry, and the gaps between the panels, on closer inspection, push away from the camera and exacerbate the overall negative impression.

To be honest, the Belarusian Zenith branch after Zenit-12SD visually looks cooler. 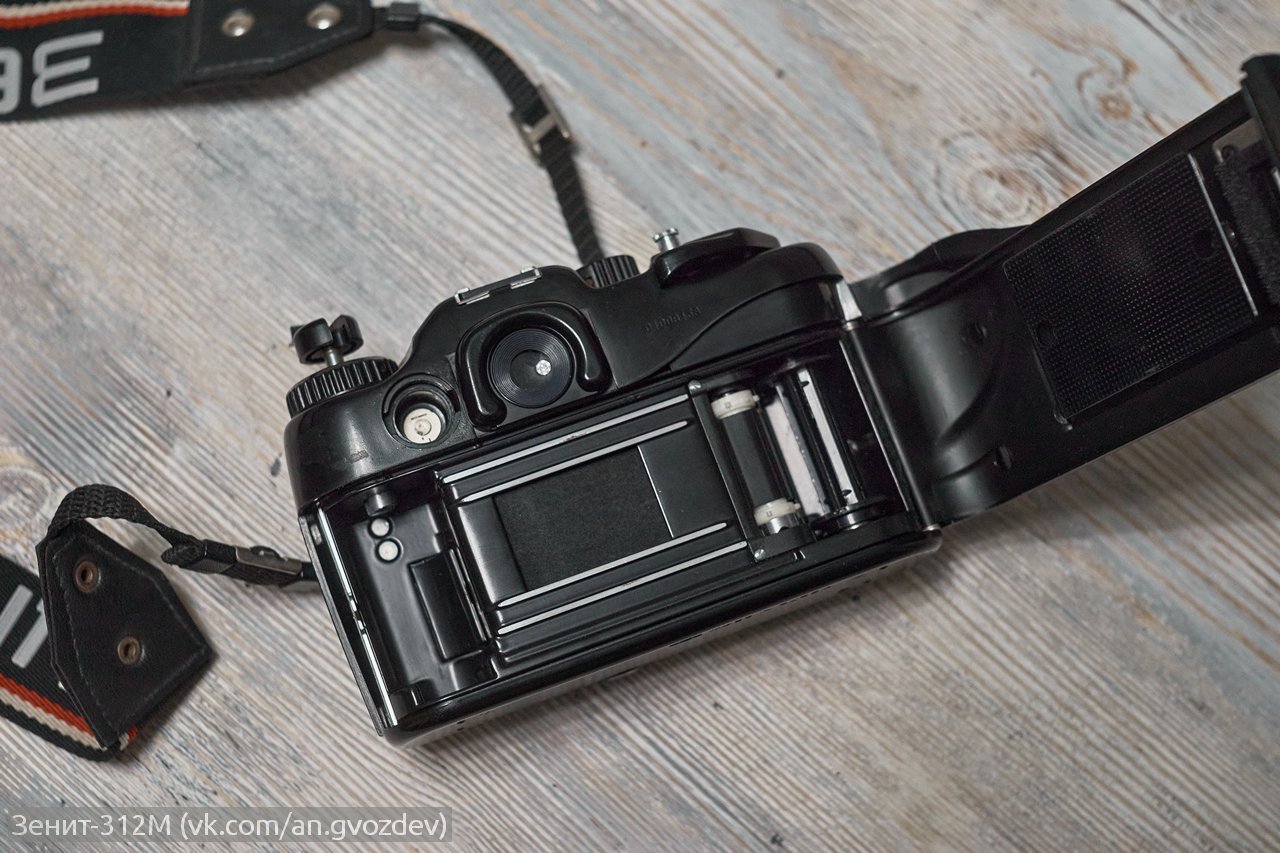 The inflated design of the release of the latest Zenith models as a whole, in my opinion, is not a very successful solution. And if you are looking for Zenith for shooting, then you should pay attention just to the parent of the line - Zenit-12SD (12XP) or, its ancestor - Zenit-TTL... The price of all zeniths, except for very rare models, is now about the same on the used market - 300 rubles. But older models used selenium exposure meters, which cannot be found alive.

This camera was supplied to the market with the following lensesAs:

The copy presented in the article from the catalog of V. Suglob does not belong to any of the famous Zenith lines, and is simply not there, since the camera was produced after the collapse of the USSR. It was purchased with the MS Zenitar-M2s 2/50 lens, which has a streamlined plastic body.