FED 1:2 F=50mm is a fairly rare lens from the 40s of the last century. Produced as standard for cameras FED-S (FED-Komandirsky, FED-NKVD), it is relatively well known that about 20000 lenses with cameras have been produced.

The lens is made in a retractable design, however, despite the fact that it can be installed on cameras through the M39 adapter, there will be no infinity by default. You need to move the lens a little closer to the matrix for it to appear. Non-standard working length, that's all. For shooting portraits of a regular position after installation, it’s quite enough for yourself. And at infinity, I'll tell you - there is sharpness).

Simply keeping the FED tube 1:2 F=50mm not fixed in its place on a permanent basis is fraught with a punched matrix. The tube in the folded state will confidently reach it. 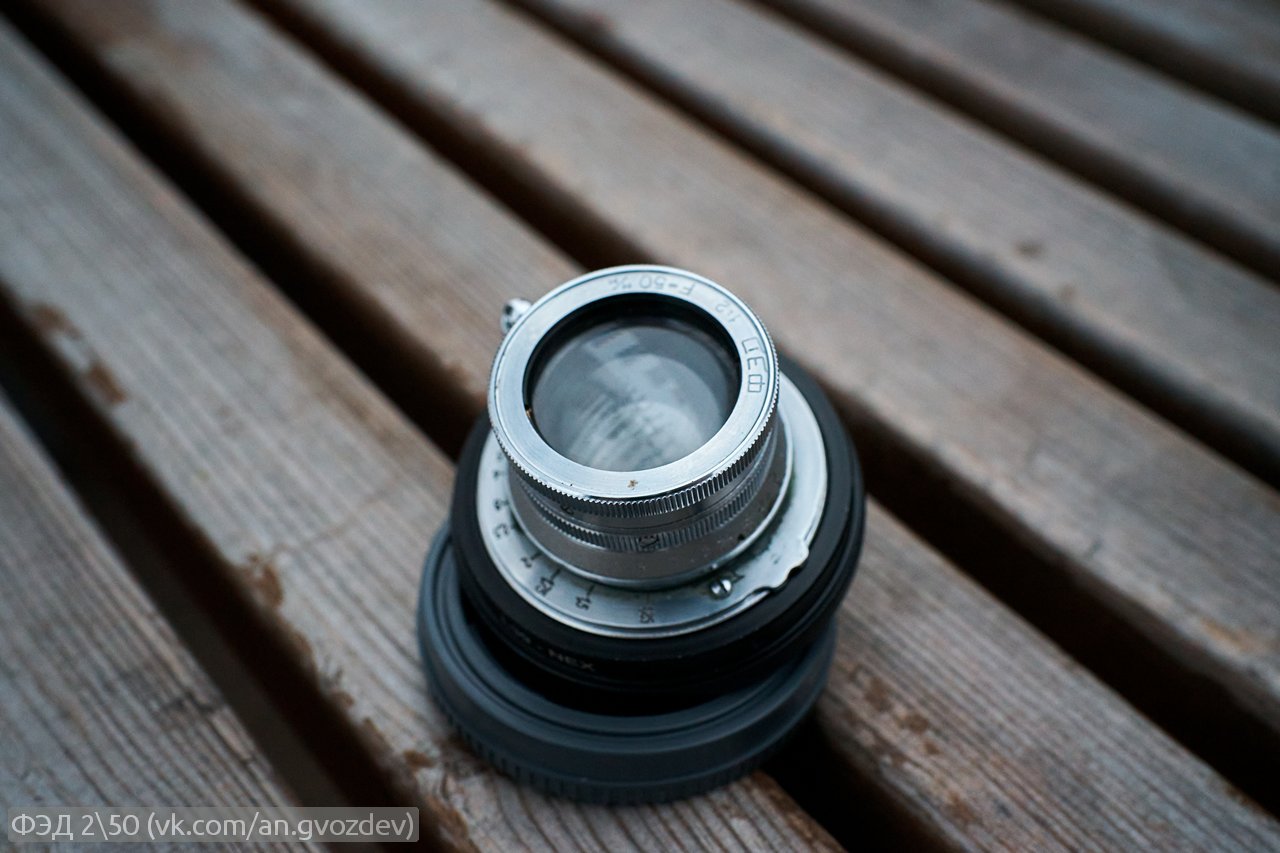 FED 1:2 F=50mm is interesting not only because it is, in essence, a copy Leitz Summar 2/50 in a simplified frame, but also because it is a lens that does not have any enlightenment at all from the factory. A natural oxide film coating appears on the front lens after a while, but this can be neglected, since the picture will improve only when shooting in b/w. Small. At all. In general, I cleaned this film of patina, along with dirt and dust with lenspen, so that at least I could shoot. In the photograph of the lens, it seems that without enlightenment it looks somehow lifeless. After all, its glass does not really shimmer, and does not have any deep coloring. 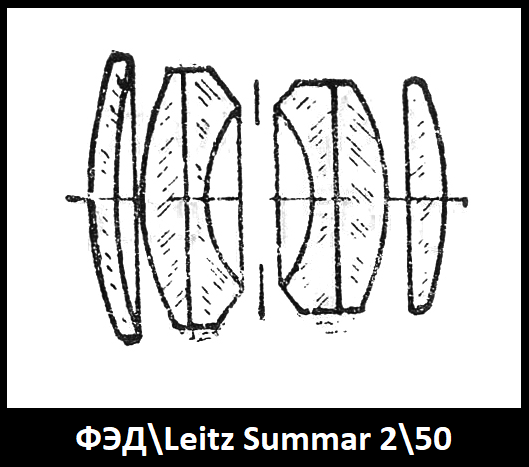 FED 1:2 F=50mm has a convex front lens. The rear lens is also convex. Depth of field, perhaps that's why it's the same). The lens circuit has 6 elements in 4 groups. The scheme is identical to the Leitz Summar 2/50, produced by the Germans from 1933 to 1940. The difference is not only in the simplified frame, but also in the number of petals. The 6-blade Leitz diaphragm produces a hexagonal hole, while the 10-blade 2/50 FED produces a round hole at all apertures. 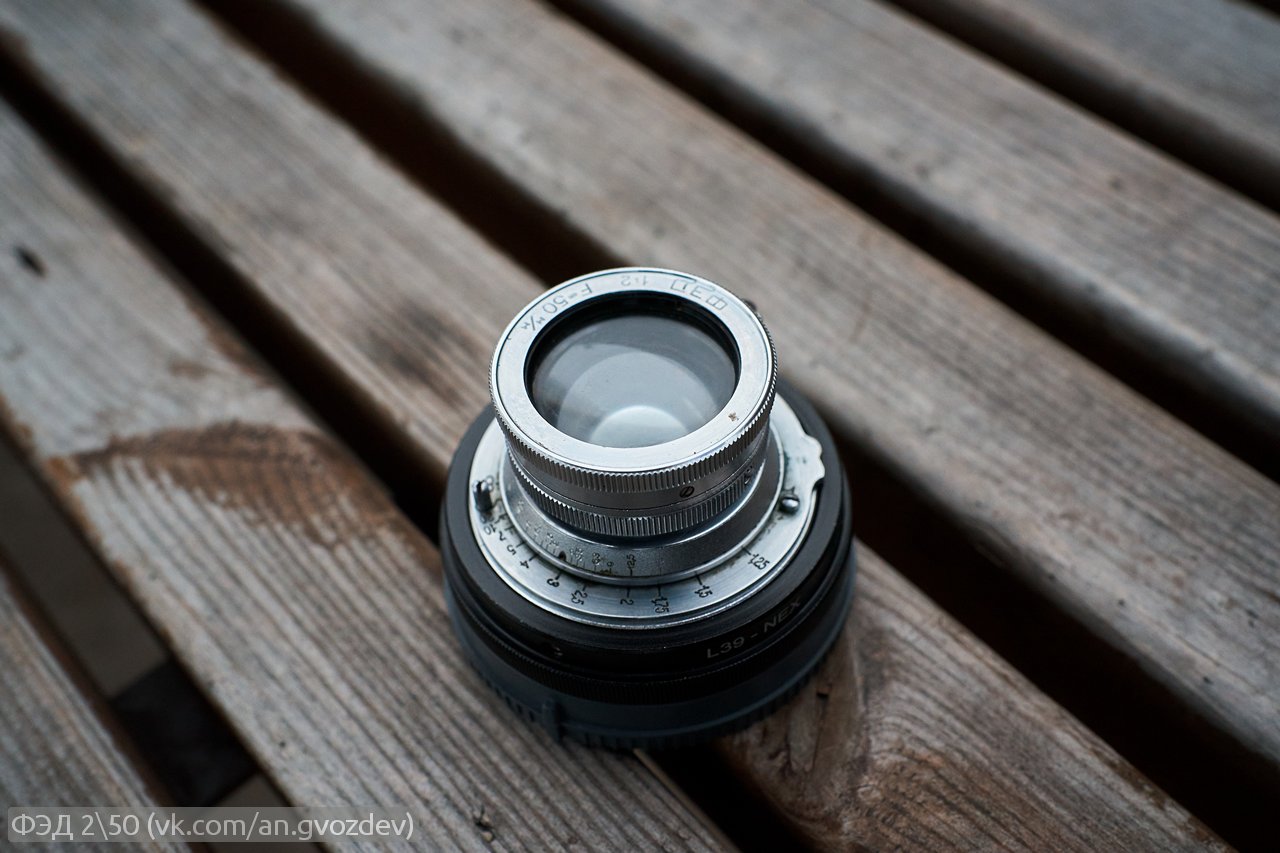 The FED diaphragm 1:2 F=50mm is controlled by a ring that goes immediately behind the frame of the front lens. The ring is threaded and critical to the presence of lubrication due to the fine thread pitch. The set of values ​​\u2b\uXNUMXbis not quite familiar - XNUMX, 2.6, 3.5, 4.5, 6.3, 9, 12.5, 18... The rotation of the ring will be smooth and easy if it is properly maintained. 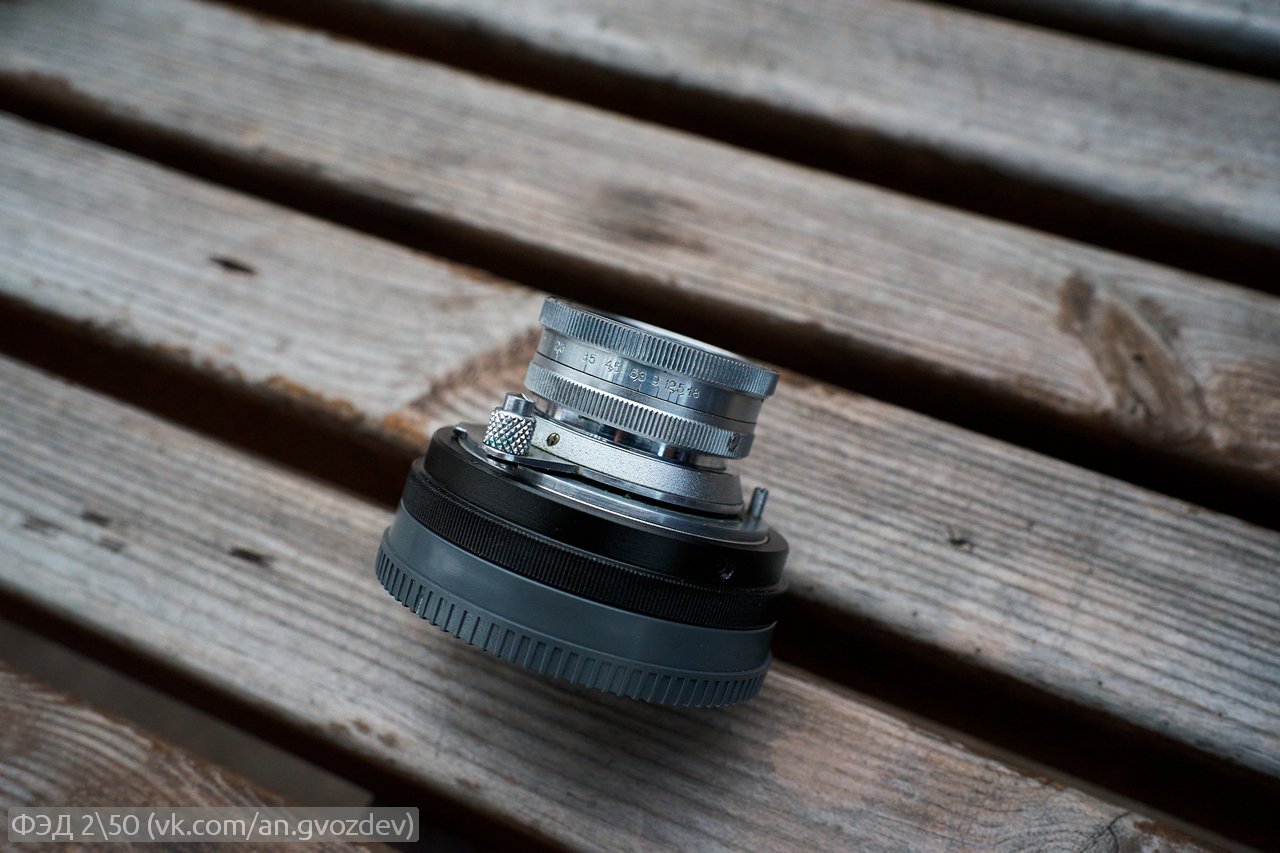 Focus control is similar to the Industar-22 3,5/50 and FED 3,5/50 tube lenses. You drag the ledge with the blocking button in a circle, thereby aiming. Tube FED 1:2 F=50mm is longer and thicker than its more massive and dark counterparts. 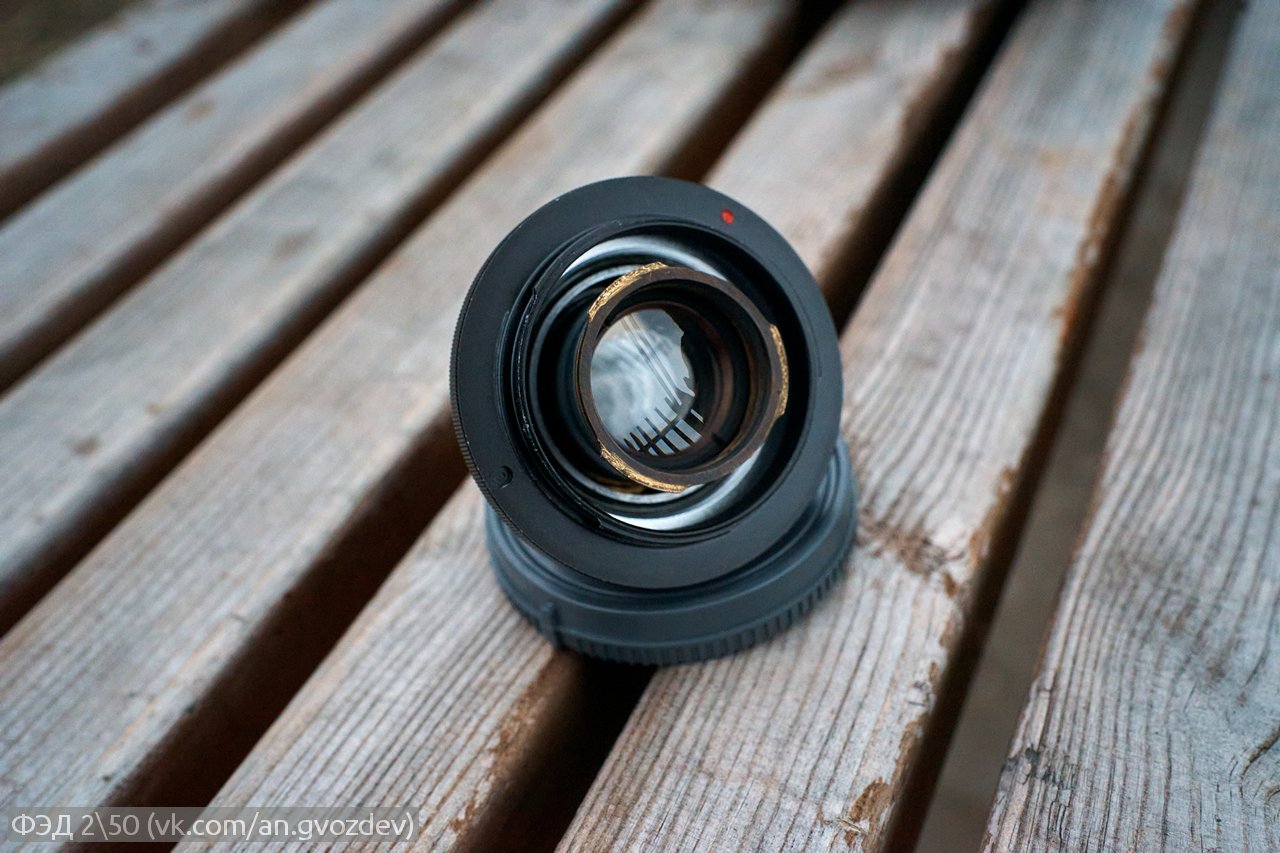 The lens has sharpness. Center. Closer to the edge of the frame, it decreases significantly. Of course, I don’t know how things are with the sharpness of older planars for large format, but the Sony A7 II, with focus peaking turned on, draws sharpness like a buzz, and with FED 1: 2 F = 50mm zoom must be used for precise focusing. 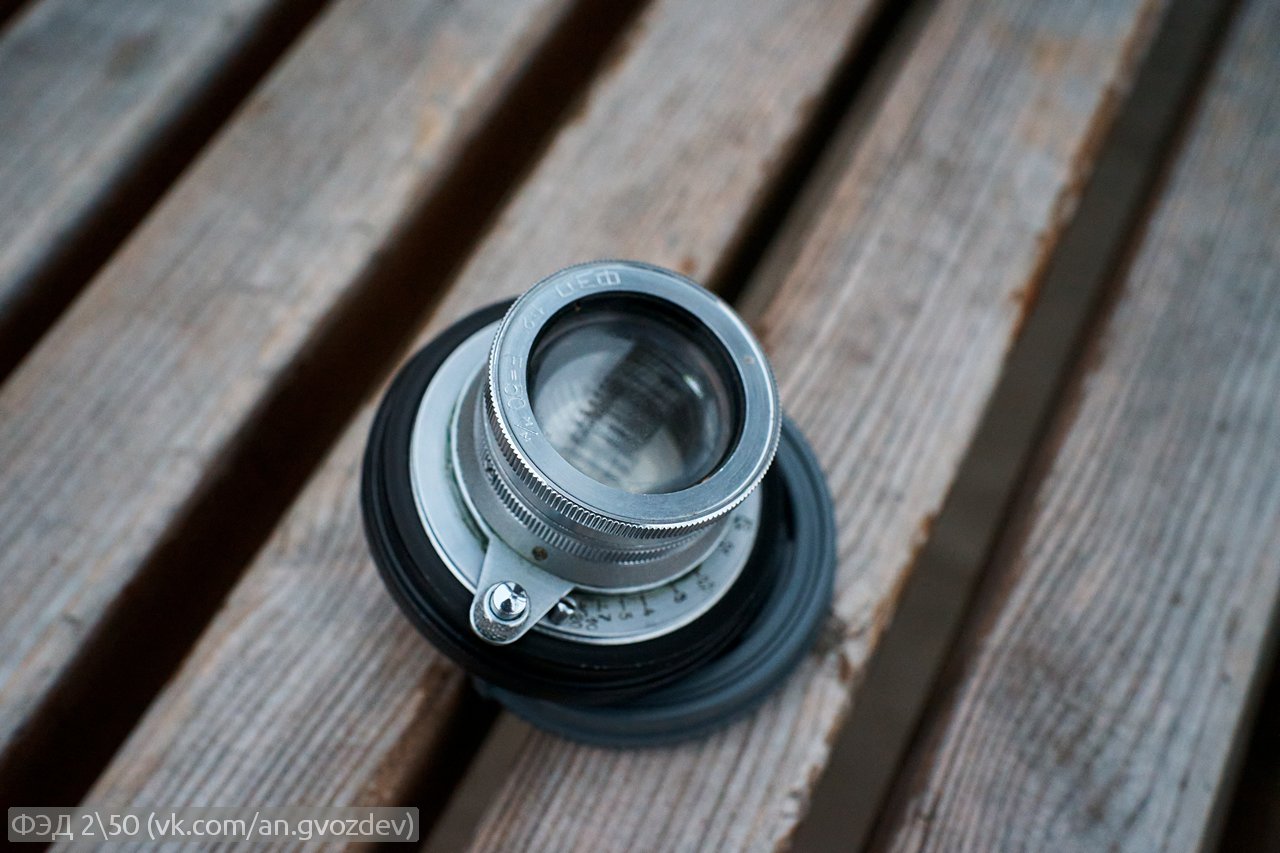 The lack of contrast can somehow still be leveled out during post-processing, but the huge number of re-reflections that occur when light sources enter the frame - alas, no. 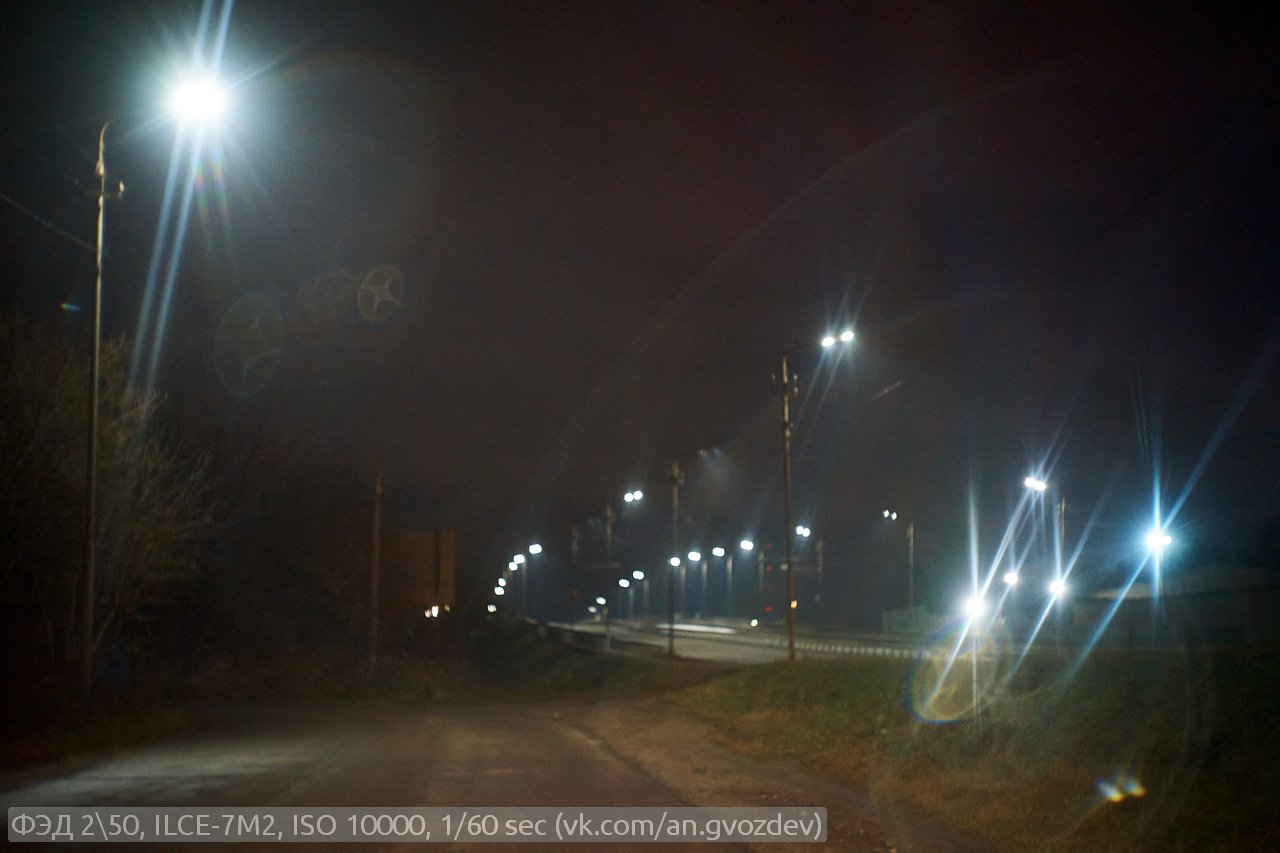 There is a review of several lenses from FED, and cameras of a later release:

The quality of the image I wanted to write "leaves much to be desired." However, this is only when there are light sources in the frame. Plus, let's make allowance for the fact that this is, after all, an ancient fast planar (double Gauss lens) without enlightenment at all. The lens of the same scheme that is now used in every iron. Yes, yes, when chemists got down to business, it turned out that the planar is a high-quality and very scalable solution for every day. With the use of modern technologies of chemical coating, planars of various modifications are used in both standard and telephoto lenses. So... anyway, FED 1: 2 F = 50mm according to its status, it has long been supposed to stand on a shelf.

The rejection of full symmetry in favor of the so-called semi-symmetrical or "proportional" lenses made it possible to increase the aperture ratio of the Planar, which in the original did not exceed f / 3,3. The first success in this direction was noted in 1920 by the English company "Taylor-Hobson", which managed to "open" the aperture to f / 2,5 in the Opic lens. However, the most successful was the German Zeiss Biotar with a record f / 1,5 aperture, developed by Willi Merte (German: Willi Merté) in 1927 for cinema. Post-war litigation between the eastern and western branches of Carl Zeiss led to the fact that the rights to the name Zeiss Biotar went to the enterprise in the GDR, and all lenses of this type produced in the FRG were forced to be labeled as Zeiss Planar.

Biotar served as the basis for most modern high-aperture normal lenses, although its western pseudonym Planar is often mentioned in this context. The use of additional lenses (including aspherical lenses) and the latest types of glass allows the Biotar aperture to be increased to f / 1,4 and even f / 1,0. The fastest in history was the Zeiss Planar 50 / 0,7, designed on one of the first transistor computers IBM 7090 for NASA's lunar program, and released in only 10 copies. In the USSR, all "Helios" and "Vegas" were typical examples of "double Gauss". Besides them, the same device had the normal Volna and Zenitar lenses. Most modern fifty kopecks are also based on the double Gauss design. These are inexpensive lenses (Canon EF 50 f / 1,8; AF Nikkor 50 f / 1,8D) or high-aperture professional lenses (AF Nikkor 50 f / 1,4D; Canon EF 50 f / 1,2L USM).

Shot with ILCE-7MII, post-processed in Capture One