The world | camera review with examples of photos

The Mir camera is a cheaper one due to the installation of a simplified shutter (with a maximum exposure of 1 \ 500s) version of the Zorkiy-4 camera. It was produced for two years from 1959 to 1961, about 150000 copies were produced.

Cameras of the Zorky line, of which the MIR camera is a part, is the longest-lived development of the German Leica II. Mir and Zorkiy-4 are the most advanced and maintainable Leica copies. The review uses photographs of the Mir camera with the number 6041914. Native lenses for cameras Mir:

M39 mirrorless rangefinder camera, which has a threaded connection of the same name with contemporaneous lenses. The optics from this camera can be painlessly applied to modern mirrorless digital cameras through adapter with thread M39. Read the article about adapters. 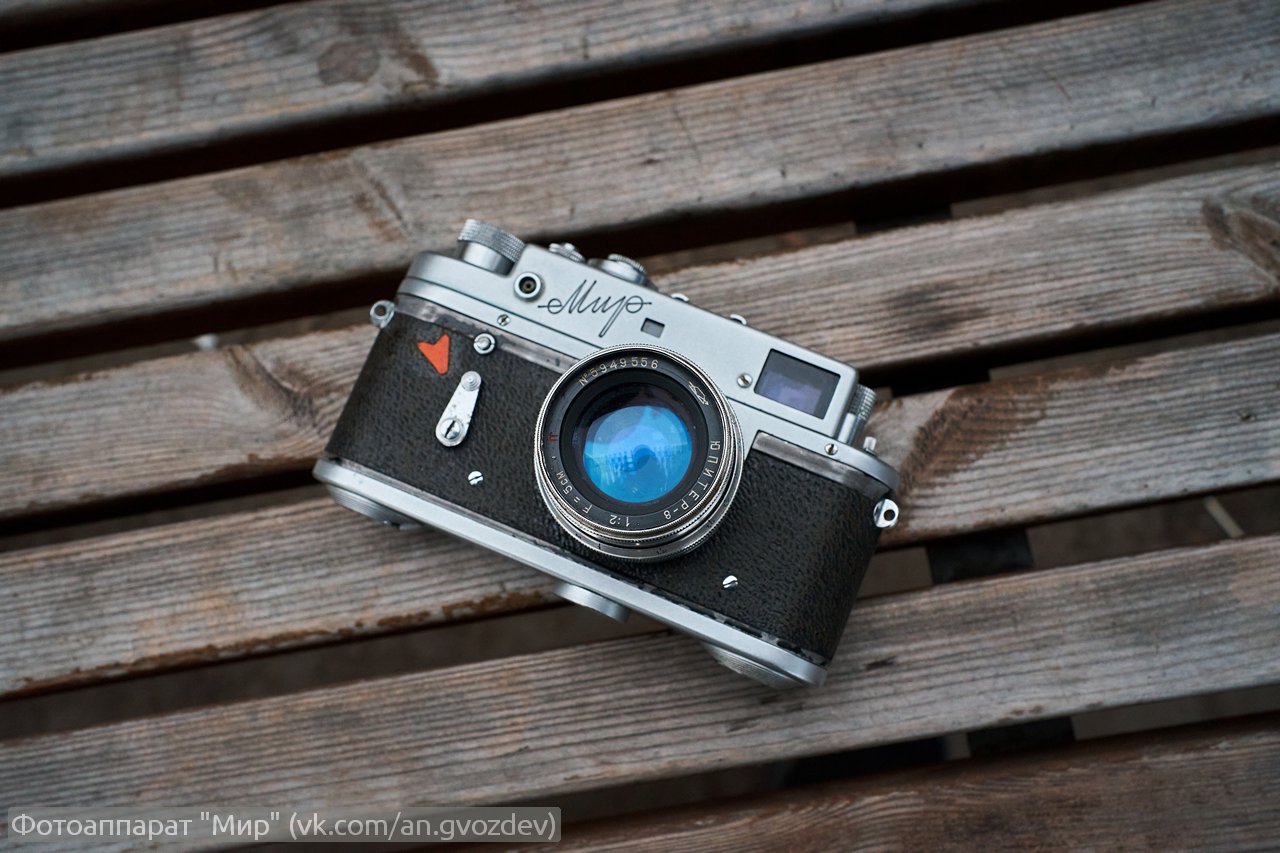 Since I have a rather cool attitude towards cameras, the first "Mir" that fell into my hands did not make much of an impression, and was presented as a gift. There was only one photograph left from him. He is cute, but less common than the more advanced, "Sharp-4". The captured frames from the camera are below. 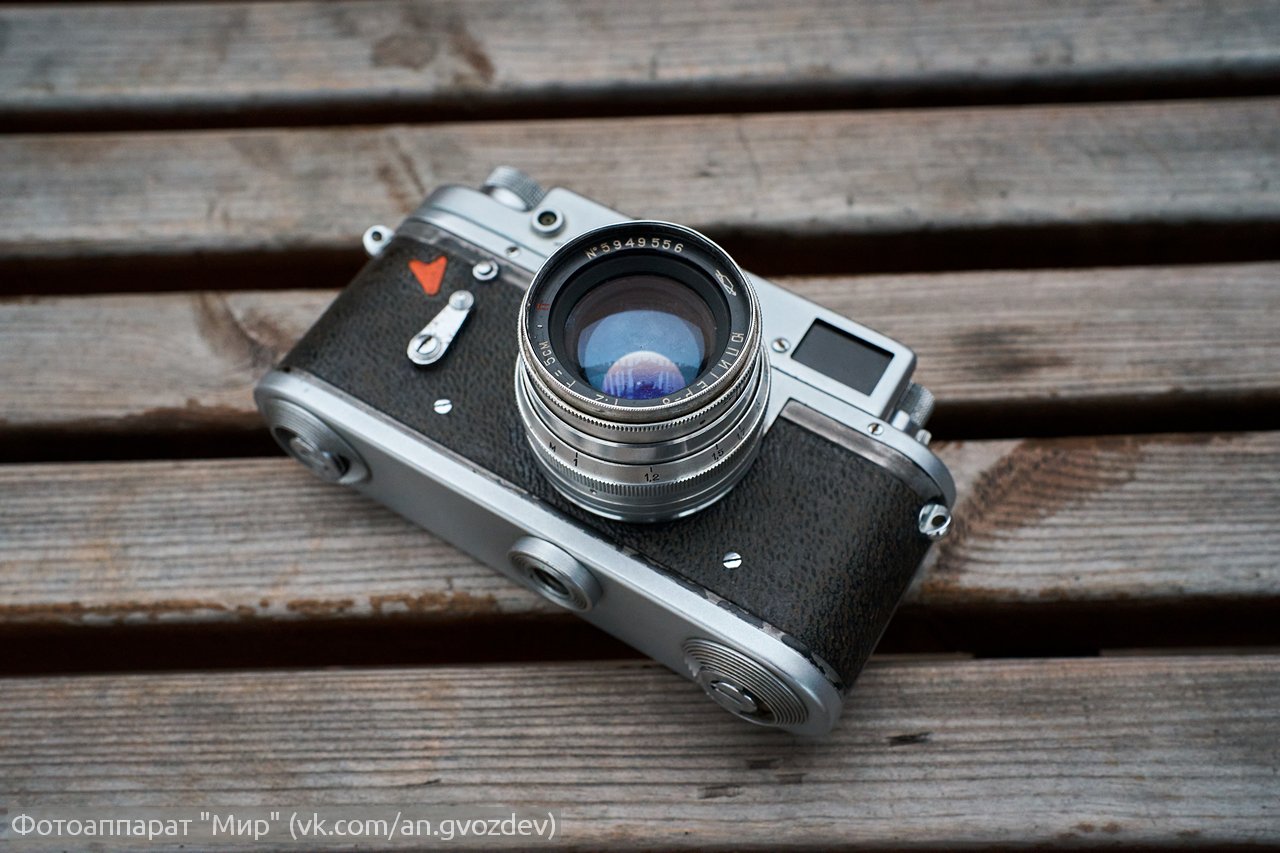 The camera is made in a metal case, equipped with a "Sharp" shutter, a set of exposures according to GOST - B, 1/30, 1/60, 1/125, 1/250, 1/500. The viewfinder is combined with a rangefinder that does not have a diopter adjustment, but with an available “zooming in 0,6 times”. Adjustment is made with a lever under the film rewind knob. The shutter is cocked and the film is transported simultaneously, and the frame counter is placed in the form of a plate on the cover of the broaching head. In ergonomics, there is a clear reference to the first FED-Zorky, and in fact, the base of the first Zorky in the MIR camera (and all small-format cameras of the USSR made on this base, including Zenits), remained unchanged. 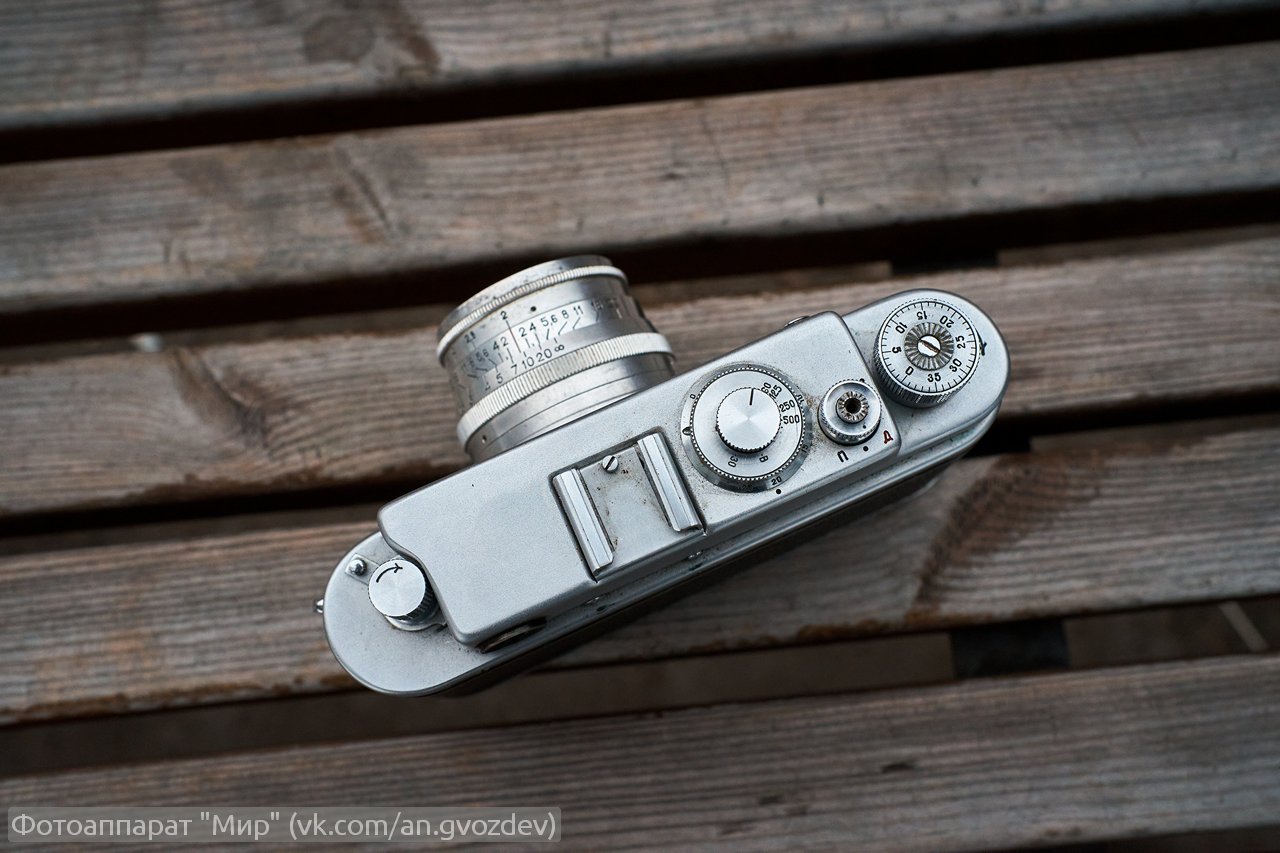 The back cover is completely removable, and the film does not take as much time to charge as it did with the first models. The take-up spool is also removable. The finish of the body, in comparison with the Zorkiy-4 camera, is vulcanized. The sharp-sighted got off with leatherette. The film was loaded under the rear removable cover. Supplied with an Industar-50 50mm f3.5 lens (rangefinder) or Jupiter-8. A camera without an exposure meter, and in order to be able to correctly set the shutter speed value with aperture, it is necessary to use an external exposure meter. 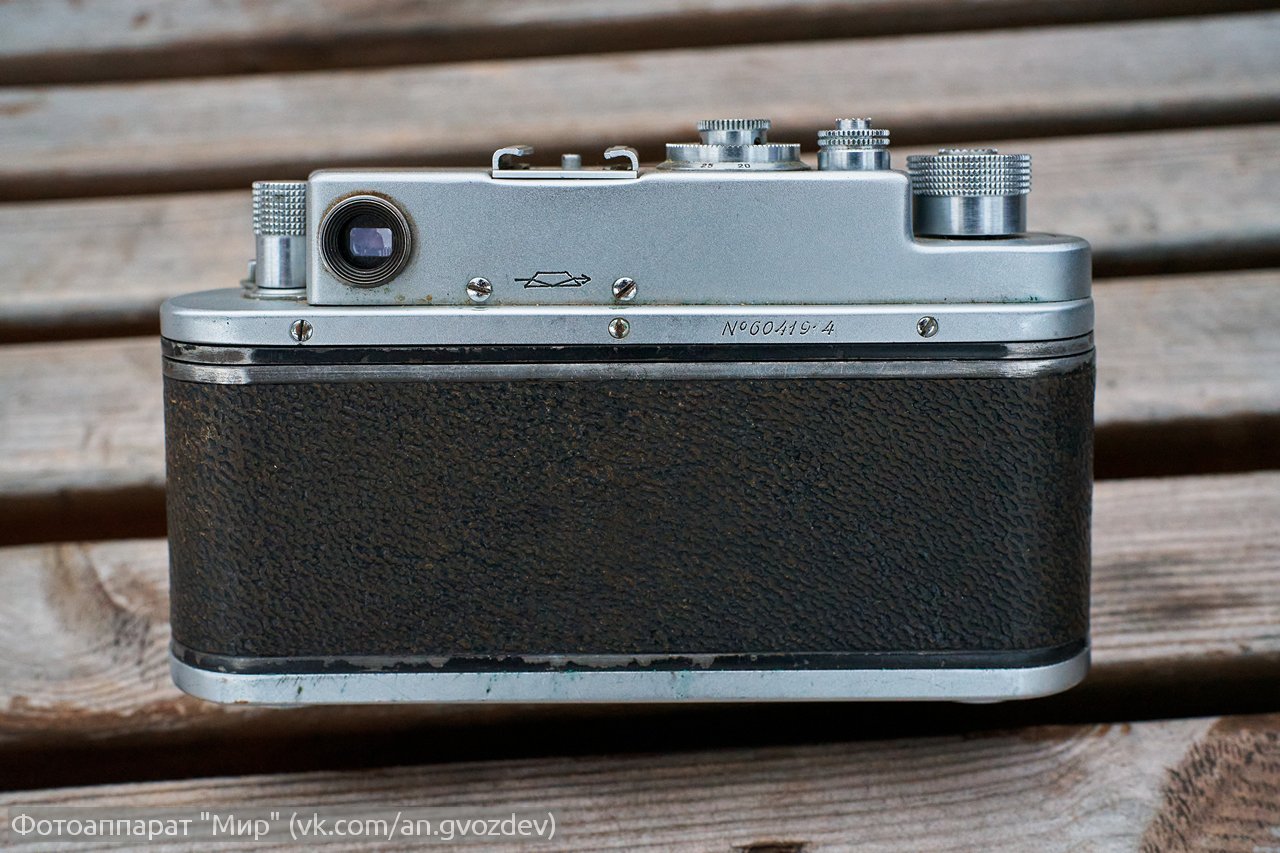 The camera controls are identical to other FED-Zorky models:

The inconvenience in working with this camera is as follows: 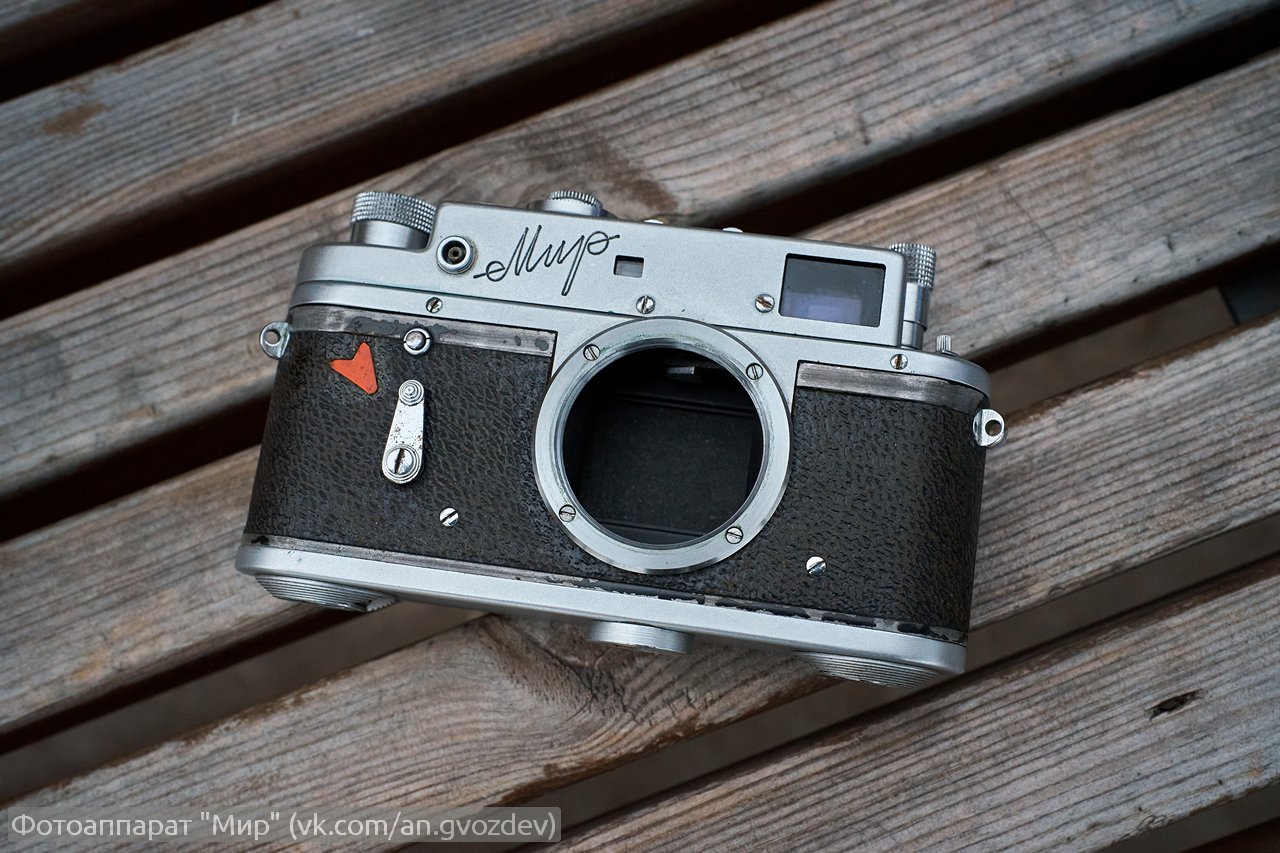 What kind of film is needed for the MIR camera?

Any 135 type (35mm) film in standard spools is suitable for MIR cameras. You can use both black and white and color, you can wind the film yourself. Can be bought from masters... A budget hobbyist color film from Fujifilm or Kodak, black and white Tasma, works well. Films c ISO 400 are suitable for low light conditions, and on films with ISO 200 is best for shooting outdoors in clear or slightly cloudy weather.

To read about the early FED-Zorky models:

Sample photos from the Mir camera

It is not particularly appreciated in the secondary market, so it can be purchased in good condition for almost nothing. Mir cameras were supplied with the Industar-50 3,5 / 50 lenses in a non-folding frame (cheaper), and Jupiter-8 2/50 (more expensive).

The stock Jupiter lens is lighter and more interesting in terms of the picture. Industar-50 is a kind of cheap and massive, darker, but much sharper already from an open aperture.