The disappearing art of physical retouching

Before digital processing of photographs appeared, if an image had imperfections or dust spots, it could be corrected with a brush and spot tone dye. 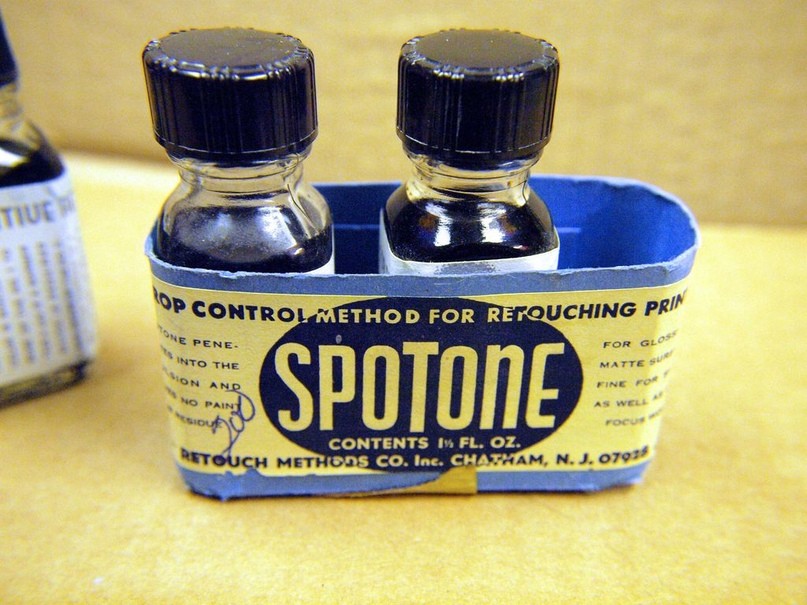 Good retouching in the past was an art in itself, but now people have not even heard of it. It is now easy to digitally retouch an image, and with digital media you won't even have a dust problem. The problem with dust on the film has been and remains to this day.

The static in the film causes dust particles from the air to stick to it, and when printed, all these small dust particles appear on the print. We used special anti-static brushes to deal with this problem, but still there are many shots where these spots were missed.

When I was studying photography in college, which I graduated from many years ago, we were required to have all prints be spotted. If you pass for a non-retouching photo, the best grade you might expect would be a “re-do”. Thus, we all learned how to retouch photos.

Digging through my dust boxes and picked out some of my spotting examples, and pulled out my old SpoTones and brushes to show you how. If you want to work with film today, then you should know about retouching.

Retouching (Spotting) is not an expensive process. Brushes and spot tone are pretty cheap. But learning to do it right takes a lot of practice. If you try this, don't start with a good print.

I used to save a set of "probes", partial prints, to practice spotting on them.

If you make a mistake, your print will deteriorate, as this process can no longer be undone. So it's worth practicing until it works out right before getting started.

Spot tone is actually a water-based paint. There are several colors: olive for sepia prints, dark blue for cyan prints, and black for regular black and white.

If you are working with color prints, it will be a completely different process, with several dyes.

Spot tone can still be found online and is still available and still at a fairly reasonable price. 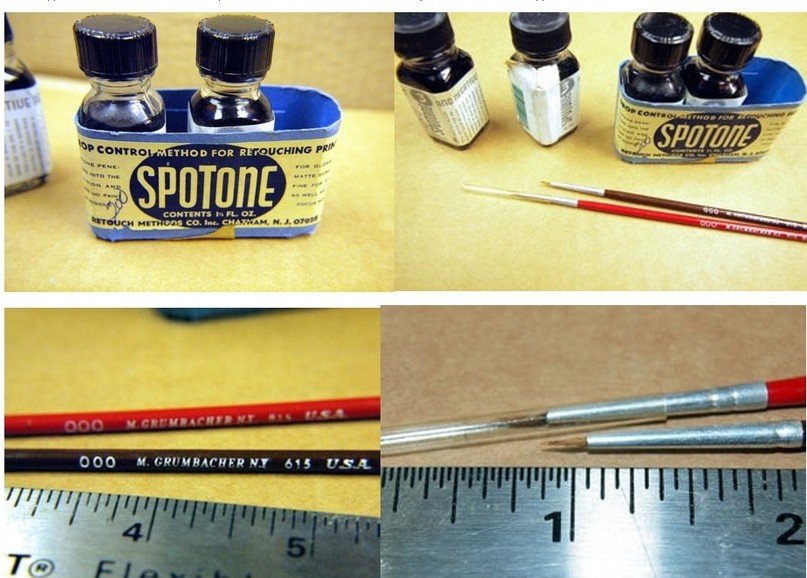 There is only one shade of each dot tone. For lighter shades, dilute with water. The usual way to do this is to pour a small amount of water into something like a bottle cap, and then simply dip a brush in it and brush it over an old sheet of photographic paper to test the shade. This way you end up with a series of drops, each of which is more transparent than the other.

This job requires a surprisingly small amount of corrector. I often just used a dot-tone bottle cap to get enough paint. Just soak the brush a little into the lid. Since this is a water based paint, if it dries, all you have to do is add some water. One of my bottles dried out on the table and I just added water to it and after a little shaking it looked like new.

I knew one professional who simply licked his brush until it reached the desired shade. This will seem odd to you, but obviously it is not toxic. 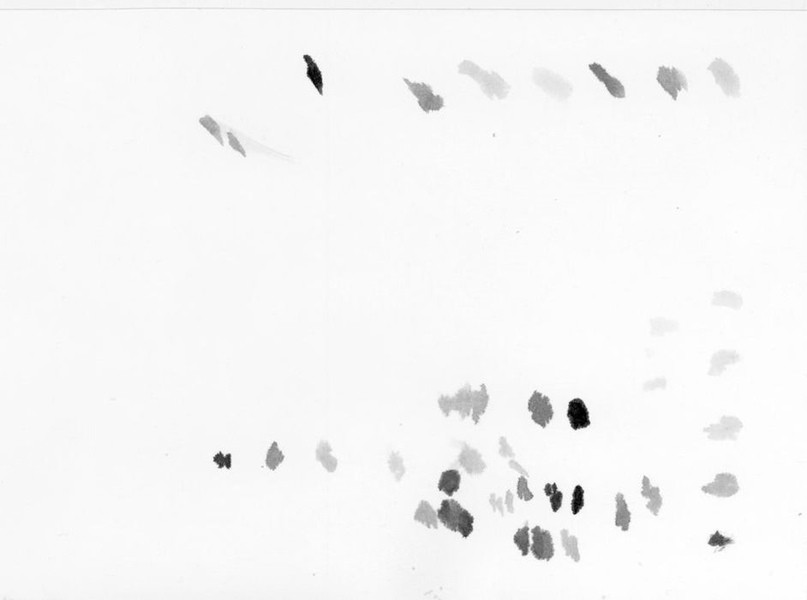 Once the toner hits the print, it becomes part of it. It is a dye and therefore changes the print. You cannot then just drop water on it and wipe it off from this place. Also, the longer you leave the drop in place, the darker it gets.

So the technique is to apply the toner for a while and then wipe off the excess. If the stain is not dark enough, repeat the procedure. This should be continued until the dust spot disappears.

Although the process looks like a watercolor painting, it is very different. The longer you leave the dye on the paper, the darker the stain it leaves. It is best to start with a lighter shade and gradually darken the stain with several applications. You cannot go back if you get to darkness. So the idea is to be conservative. 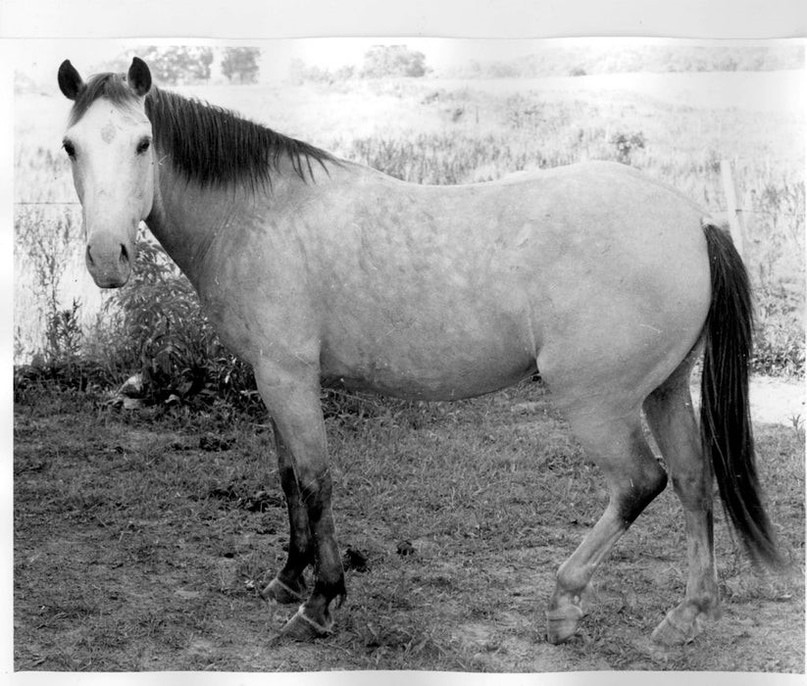 You can use a magnifying glass to see the spots up close. A table lamp, which can be placed closer to the print, also helps. This is a very painstaking job. And it takes a lot longer than digital retouching. While I'm pretty good at it, I can't say I miss this job. One of the great benefits of digital retouching is that you can make the image very large to see the smallest defects. You also have a cancel button. And here the action of the brush can no longer be canceled.

The video shows the process of retouching several dust spots. As you can see, the print had a lot of them, in fact it is just a test print.

It was difficult to work with it and control the camcorder, trying to get close enough to show what I was doing, but without interfering with the processing of the image. I also could not use a bright directional light, because it would create glare on the print for the camera. You should get an idea of ​​how it works. In long pauses, I lighten and blend the shade of the spot in the drop of toner.

Step 3: An Example of What You Can Do

Once, as an experiment, I tried to take some pictures under firelight. However, the roll of film in the camera was underexposed and I wanted to maximize my images in the fireplace light.

Pushing is a special processing method that uses a special developer and higher temperatures to obtain a higher film sensitivity. 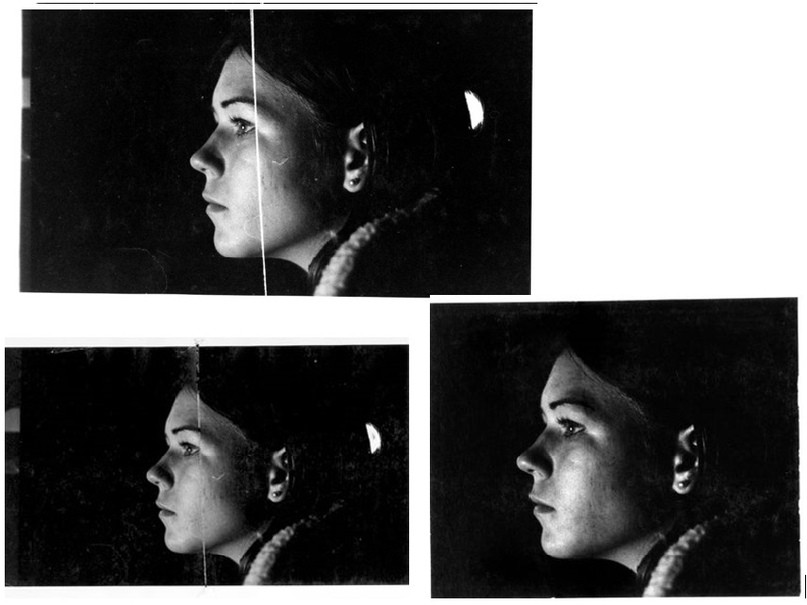 TriX 400 films can be brought up to 1200 ASA using the developing technique. I needed to process half of the image that was shot under firelight. This meant that I had to cut the frame in half in a dark room.

There was no way to know where to cut, it was only guesswork, so I took a pair of scissors and in the dark I found half a frame at random and then cut.

And of course I calculated wrong. In fact, I cut right in the middle of one of the best shots. Determined not to lose it, I printed both halves on the same paper and then retouched the cut. It worked out pretty well. In the finished print, it looks completely fused.

However, if you increase the size of the image (on a good scanner), the retouching will become visible. If I wanted to now, I could continue digital retouching and completely patch this line. But then it was pretty good work.

I took this picture, printed it out and thought it would be very interesting if I could make the entire area in the background black. I tried to darken this area during printing, but it only partially worked. 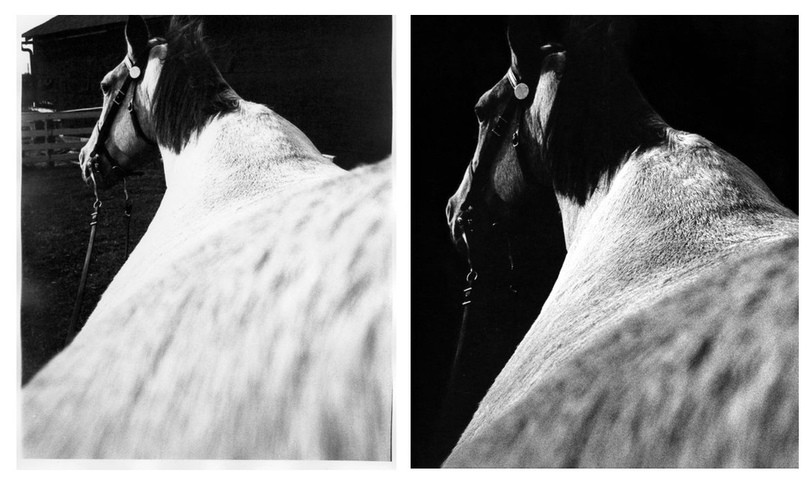 I ended up with a brush and more point tone. It's hard to get the dye to be black, so it took a lot of layers to get it where I wanted it. I think the end result was pretty good. This gave an interesting perspective and used the grain of the film.

This picture just won't work in color, it's done in B&W (black and white). The final finished print, 10 x 14 inches, was inserted into a 16 x 20 baguette board to emphasize perspective. The full picture did not fit into my scanner.

I certainly appreciate your time and effort to do things the "old fashioned way", and you may be the only learner I could help with the fruitless quest.

One comment on "The Disappearing Art of Physical Retouching"