Canon 40 / 2.8 is the first Canon lens with STM focusing system. Fast, quieter, electronically controlled system. A lens that has interesting focal length, weight, focusing speed. This is, of course, narrower than fifty dollars, but it still allows you to shoot whatever you want without changing the lens. The lens has an aperture of 2.8, which allows the background to be sufficiently blurred for creative use. 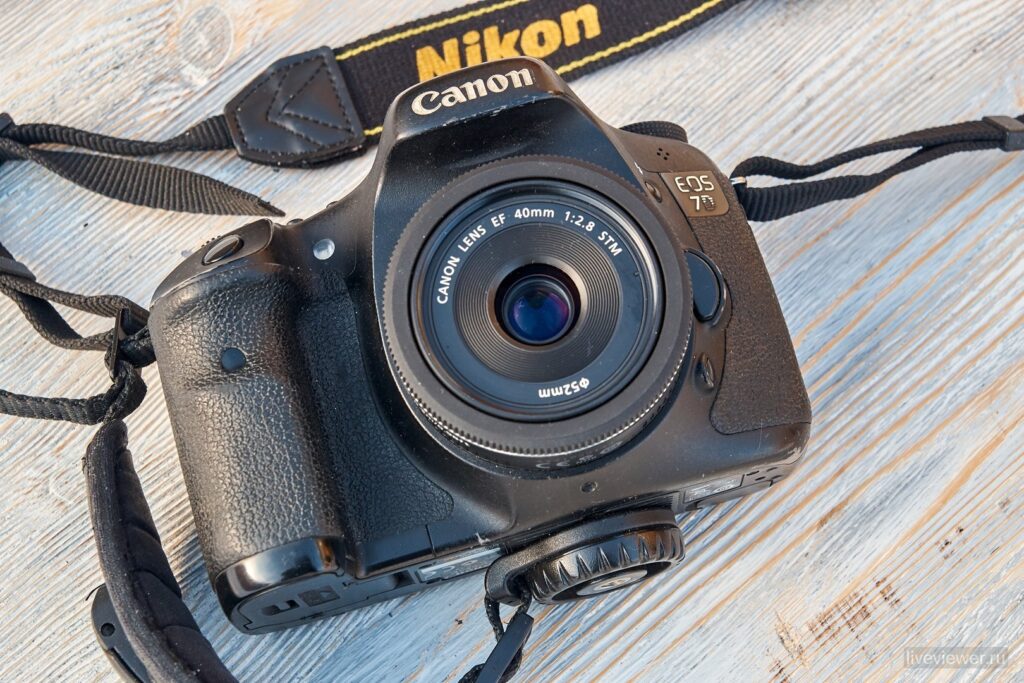 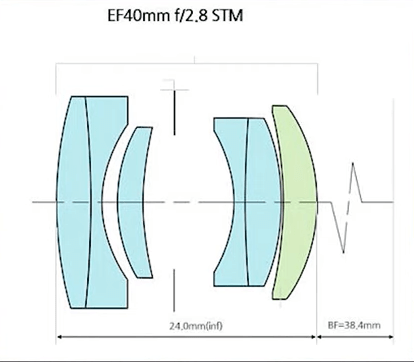 The focal length of this lens close to wide-angle, and from this its use allows shooting in many different fields. Portraits, landscapes, moderate macro, and a kit for all occasions. Especially on the crop, as EGF lens when converted to crop it will be 64mm.

Canon 40 / 2.8 body - plastic, there is a metal mount to bayonetat. The lens unit extends when focusing, under the focusing ring there is a velvet cloth, which should prevent dust from entering the body lens... When rubbed, the lens will collect dust. The hood can be installed on Canon 40 / 2.8 only by screwing it into the lens unit, the diameter for a threaded hood or filters is 52mm. The lens itself is miniaturized, and weighs even less than some smartphones) 130 grams in total. 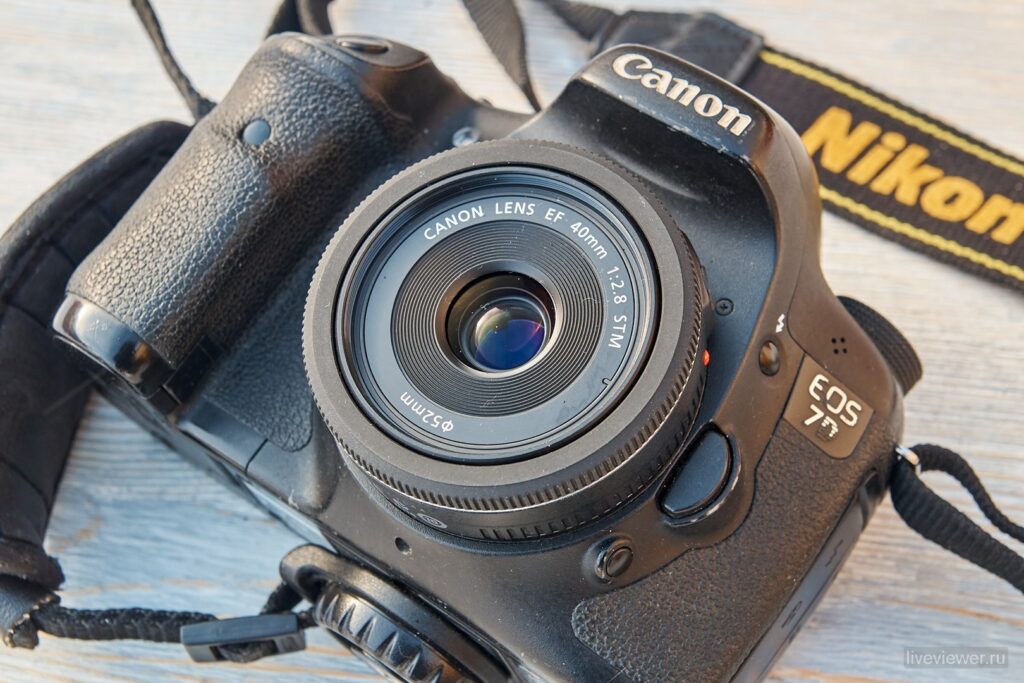 Not instantaneous, but for a motor with a traditional gear drive, albeit with a fashionable name - quite accurate. This makes me happy. On the open aperture from Canon 40 / 2.8 there is not much defect, but it has a place to be. Therefore, be careful when working. The focusing drive is electronic, in the absence of power focusing does not work. The ring that drives the drive is rubberized plastic, and on the inner side this ring has grooves that communicate the vector of movement of the ring to the optocoupler of the electronics. The focusing motor is noiseless relative to conventional motors. 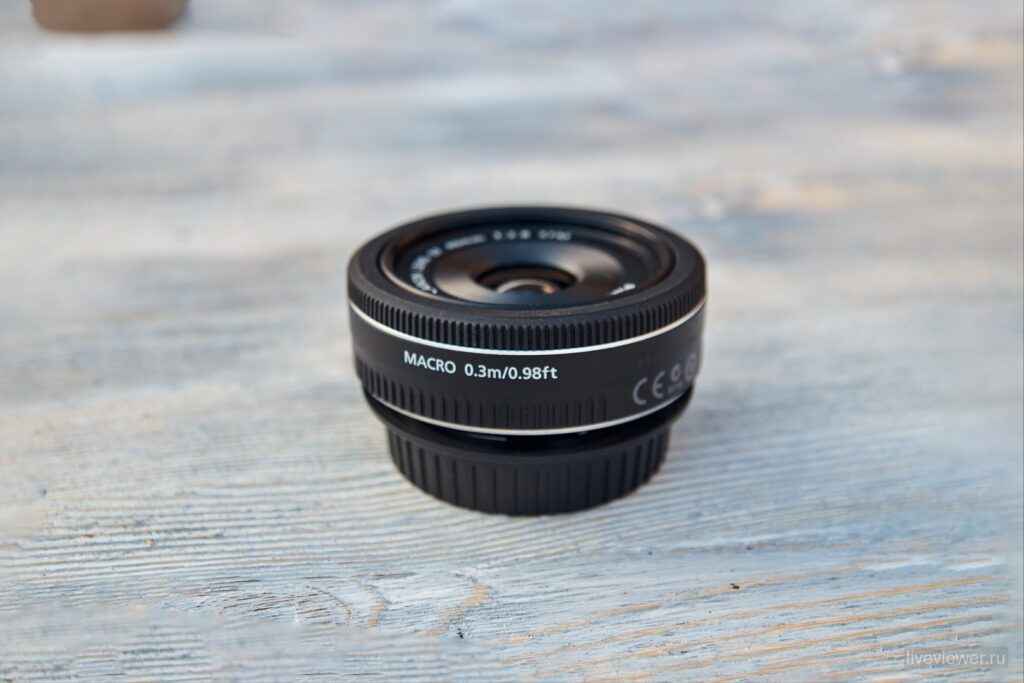 However, if you listen closely, you can hear its hum during operation. The difference between the STM motor and conventional Canon drives is the small gears in the drive and the electronic control. When focusing with your hands, the motor hums louder, and slightly steers (or dulls?). Which is a little unnerving when shooting dynamics. However, after a while you get used to it. 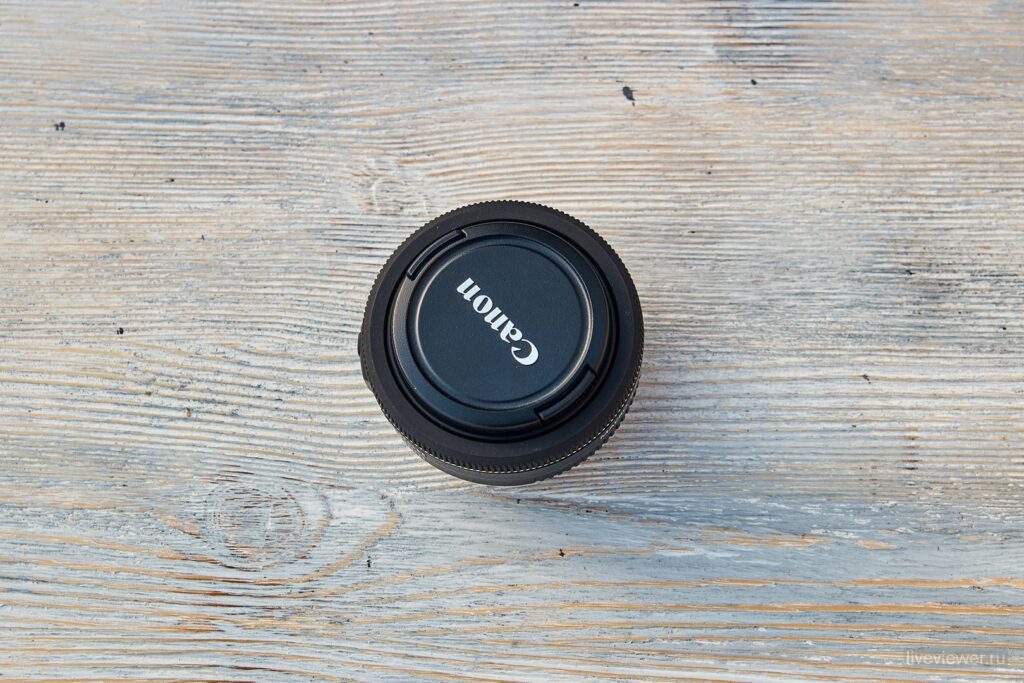 At an open aperture, Canon 40 / 2.8, when used in conjunction with crop cameras, can beat by, and this is normal for phase focus sensors. Therefore, the counter “focused - took off, focused - took off” when photographing faces or any events takes place here as well. For those who do not know, this is pressing the shutter release button associated with focusing, each time anew before the release shutter, or water in a series with AI Servo AF on, since AI Servo in fresh carcasses refocuses the lens automatically before releasing shutter. 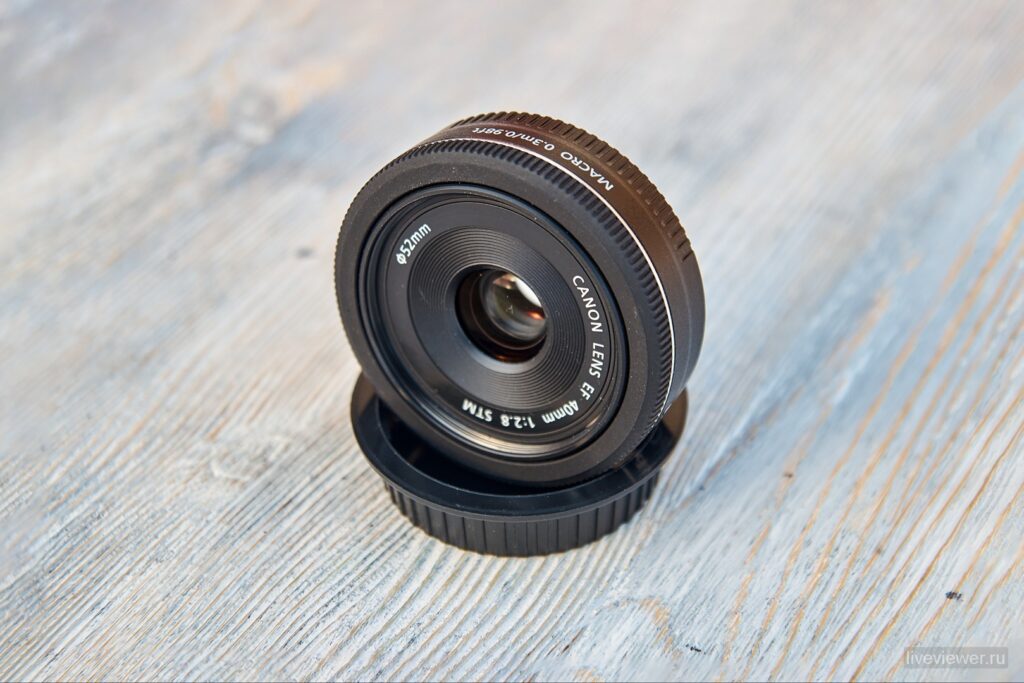 On Canon 7D, for example, AI Servo doesn't work that way. It's a pity. For those who want to use the lens when shooting video, it is worth considering the sounds it makes during operation. We'll have to shaman with the speed of focusing, or add voice acting / muffle the sound. For Sony's UPC, for example, lenses are not heard at all when focusing. 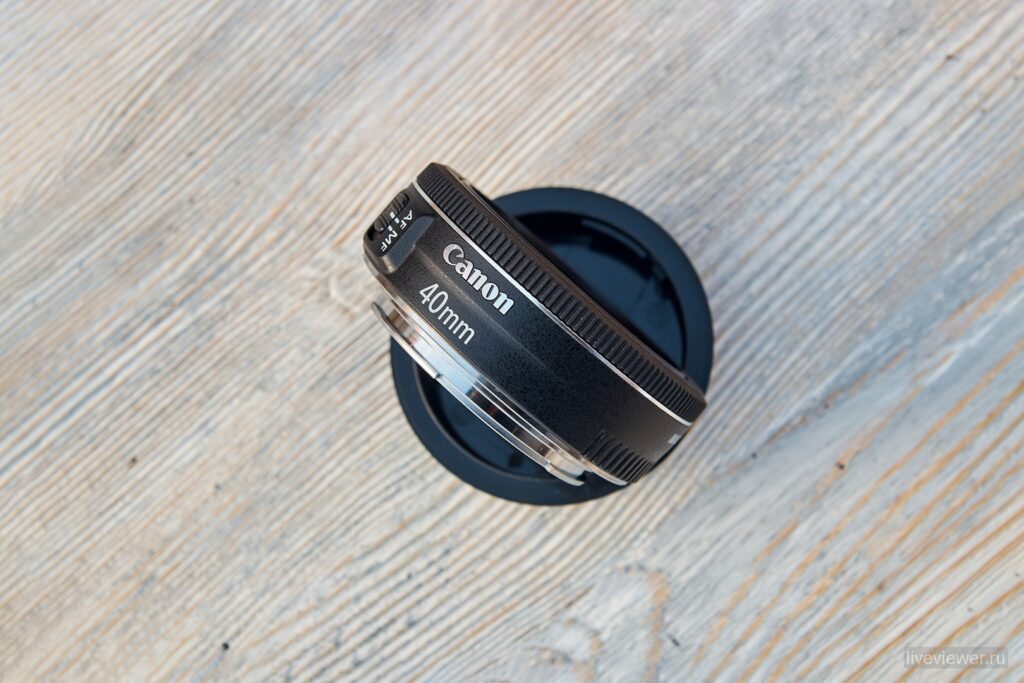 The diaphragm is assembled from 7 blades, but when it is clamped in hips the hexagons are not very noticeable. The bokeh is not very artistic, the bias towards a wide angle affects and the most open diaphragm, which for mass fixes is already the last century.

The Canon 40 / 2.8's depth of field is shallow when open, but enough to get a sharp face when shooting from close distances (chest portrait). Blurring the background does not happen in a "mess", so you should think about the background in advance, before shooting. Sharpness lens excellent, it can even be called redundant, and when shooting portraits, you can get unnecessary detail on the faces of models.

Noticeable on full-frame cameras, leveled out at f / 4. No vignetting was noticed on the crop. 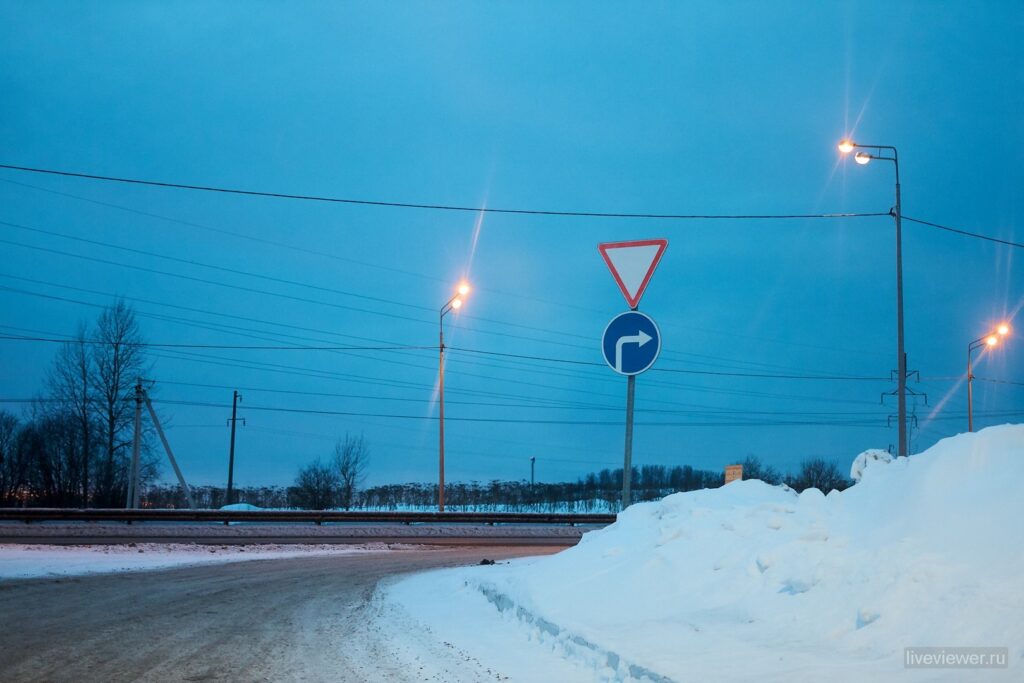 Canon 40 / 2.8 color is good, sharpness is very good, even at wide apertures. When shooting portraits, keep in mind that you will need to manually soften the skin imperfections of the models in post-processing. 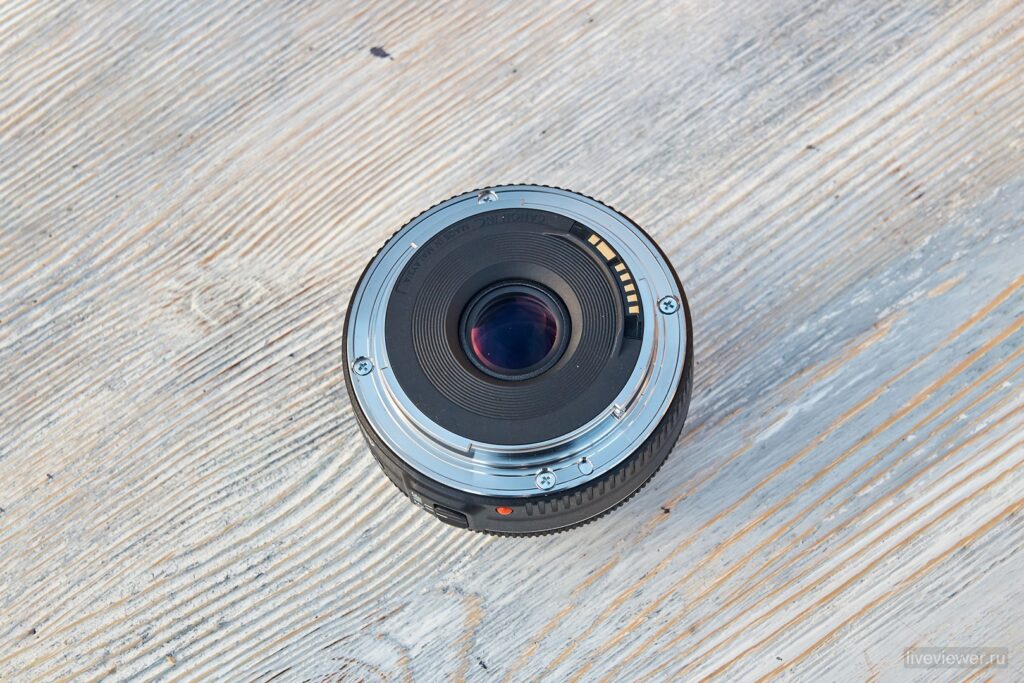