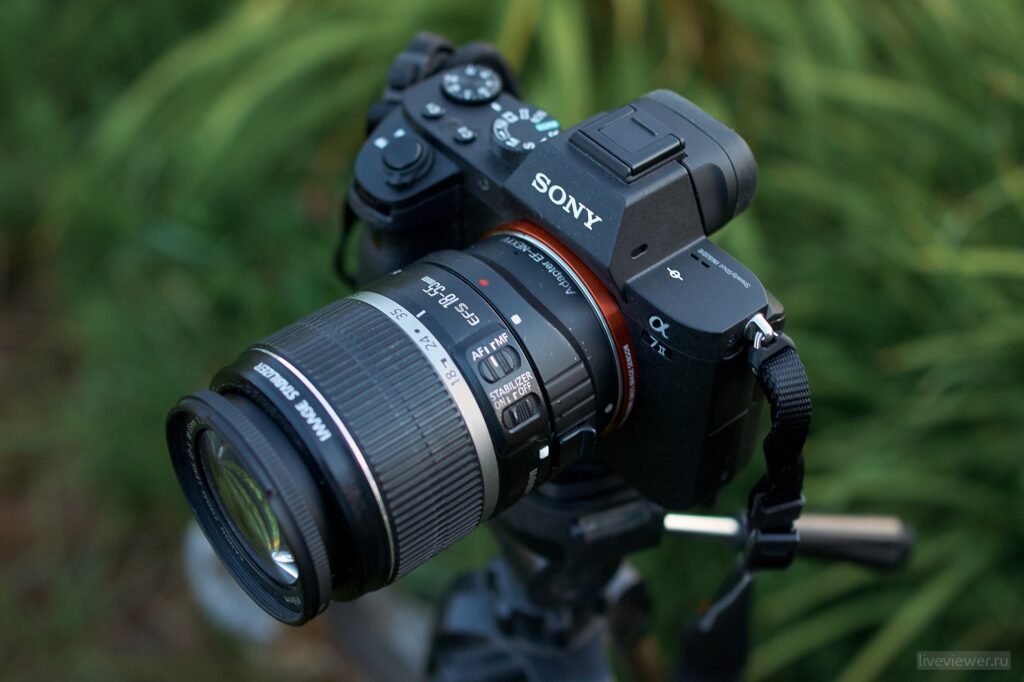 The first lenses were not considered a very high-quality purchase. due to the many aberrations and low sharpness.

Canon EF-s 18-55 come bundled with EOS cameras with bayonetohm Ef-s. The first lenses of 2003 did not have very good image quality, even by the standards of a whale, so after a while a second version was released, and a little later, a lens with a stabilizer was released on the basis of the second version. By the way, lenses of later modifications, despite slightly better image quality, have obvious production optimizations. 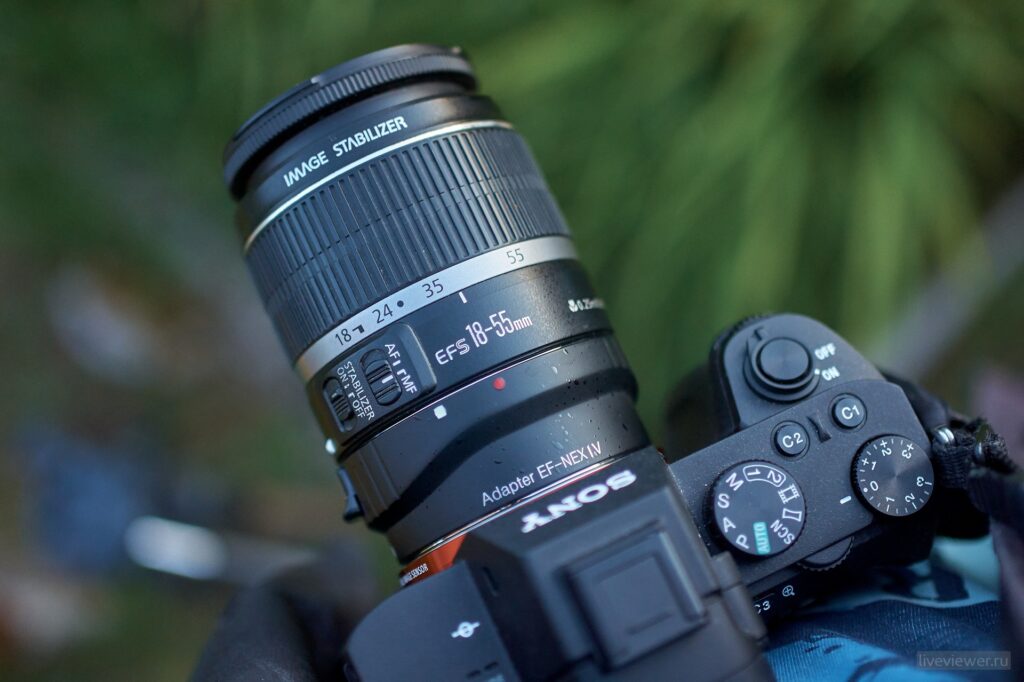 For example, a lens Canon 18-55 2011nd version with stabilizer (XNUMX) not equipped with a rubber coated ring bayonet, and the zoom mechanism uses screws that are cheaper to manufacture. In addition, (this is strange, but true) - EF-S 18-55mm f / 3.5-5.6 IS (September 2007) has better build and image qualitythan version Canon EF-s 18-55 IS II 2011... Visible at wide angles. Perhaps there was some kind of quality optimization at medium focal lengths to the detriment of wide-angle.

I would like to highlight lenses with STM and USM focusing motors. 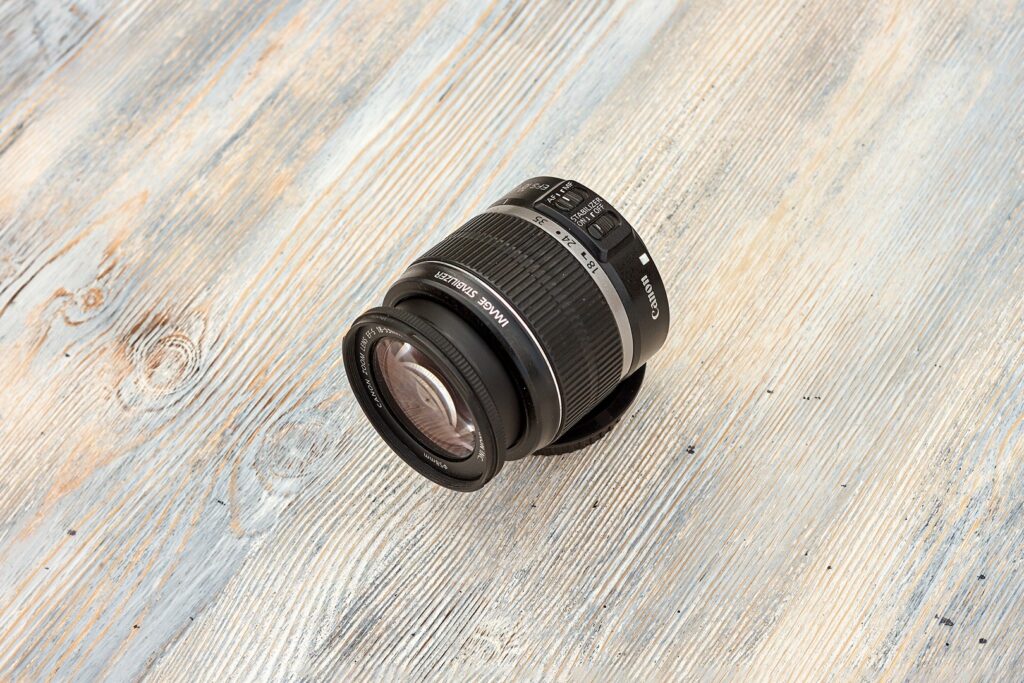 The lens is “kit” for many cameras with bayonetohm EF-s. What is a kit lens?

The lens from the review belongs to the third upgrade, has a stub and came with the Canon 1000D.

Chassis lens и bayonet the mount is made of plastic. This lens has a rubber indentation bayonetso as not to scratch the plastic when mounted on the camera. The zoom ring is rubberized, the focus ring is a molded plastic frame. Diameter for filters - 58mm. Light filters are screwed into the plastic housing of the lens block, the thread is internal. Lens production - Malaysia, lens from a "whale" kit. There are several switches on the body - focus mode and stabilizer. Canon EF-S 18-55mm f/3.5-5.6 IS has a set of popular 18-55mm focal lengths and is able to cover their needs in everyday use. 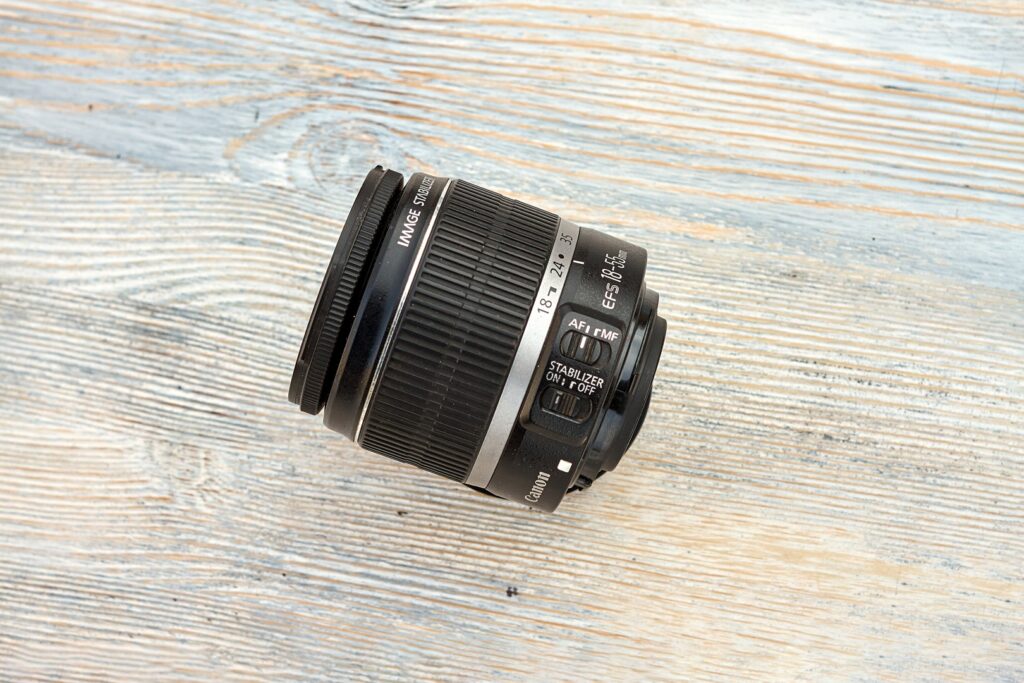 Focusing drive - stepping, there is no possibility for manual adjustment without switching to manual mode. When focusing, the front part rotates around its axis. Focusing is external, the lens is a vacuum cleaner. During focusing, the motor is loud, but focuses quickly. The lens almost always hits the mark. There is no focus ring, as such, and manual focusing produced by rotating the front lens frame.

The switch on the body must be in the "MF" position, since manual focus adjustment in the "AF" mode is not provided. More precisely, there is a possibility, but it is provided by the backlash of the drive. The switch mechanically opens the drive. Infinity comes from about 15 meters, at a wide angle - a total less. There is no focusing scale and depth of field calculation. 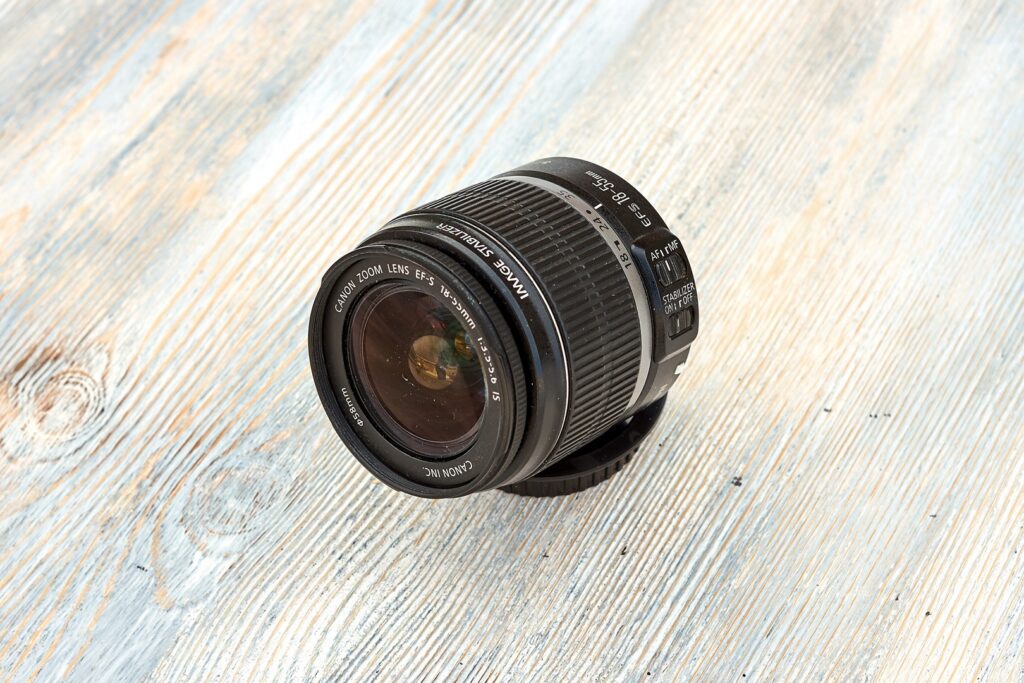 The diaphragm is rounded, has six blades, and is electronically controlled. If there is no connection with the iris, the camera will generate an error ERR01. Maximum relative hole 1:3.5 at wide angle. At the far end of the zoom, at the 55mm position - 1:5.6. Zoom lens with variable aperture. Actually, lens is not suitable for indoor shooting and in low light conditions. You will definitely have to use a stabilizer or a tripod. Plus, bully every time ISO. 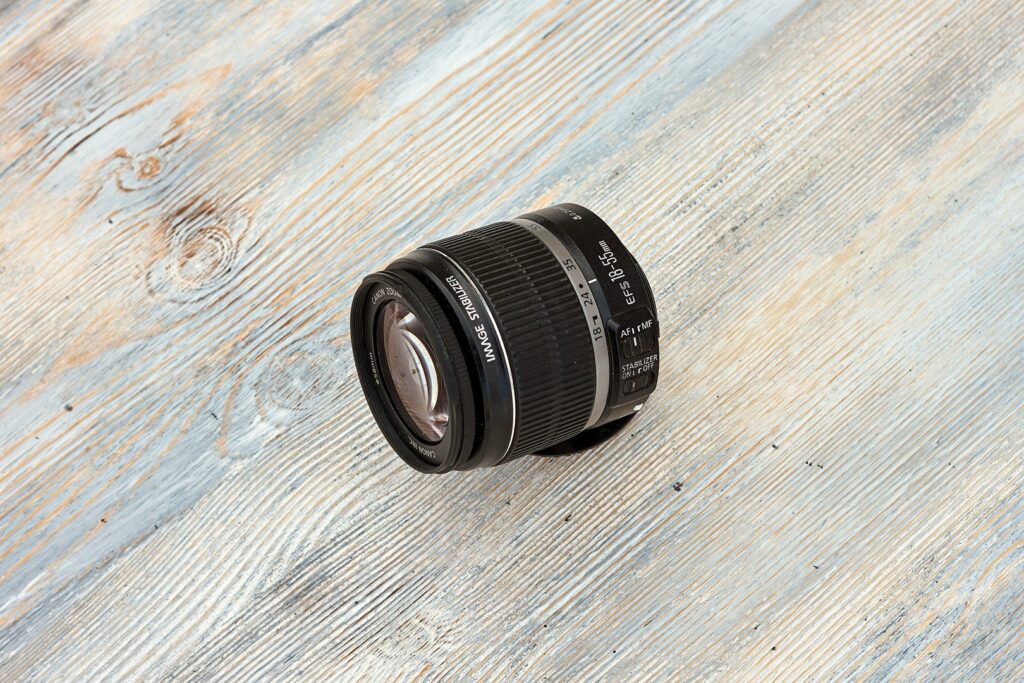 On closer inspection, all the shortcomings are noticeable, among which are insufficient sharpness, color distortion, chromatic aberration, distortion and vignetting at a wide angle. Edge sharpness lens much lower than in the central part. Contrast lens not always normal, the colors in the photo are faded. However, there are lenses with better sharpness and color. Most likely depends on factory setting. There are adjustment screws under the rubber of the zoom ring.

During post-processing, various color distortions come out. The lens does not like to transmit halftones, but he likes to rush from one extreme to another. If we observe a slight violet flare or a spot on the face, then during processing we will see a clear spot that is not cut out by anything. The light meter of a camera with a lens is not often mistaken. This happens mainly in difficult conditions. 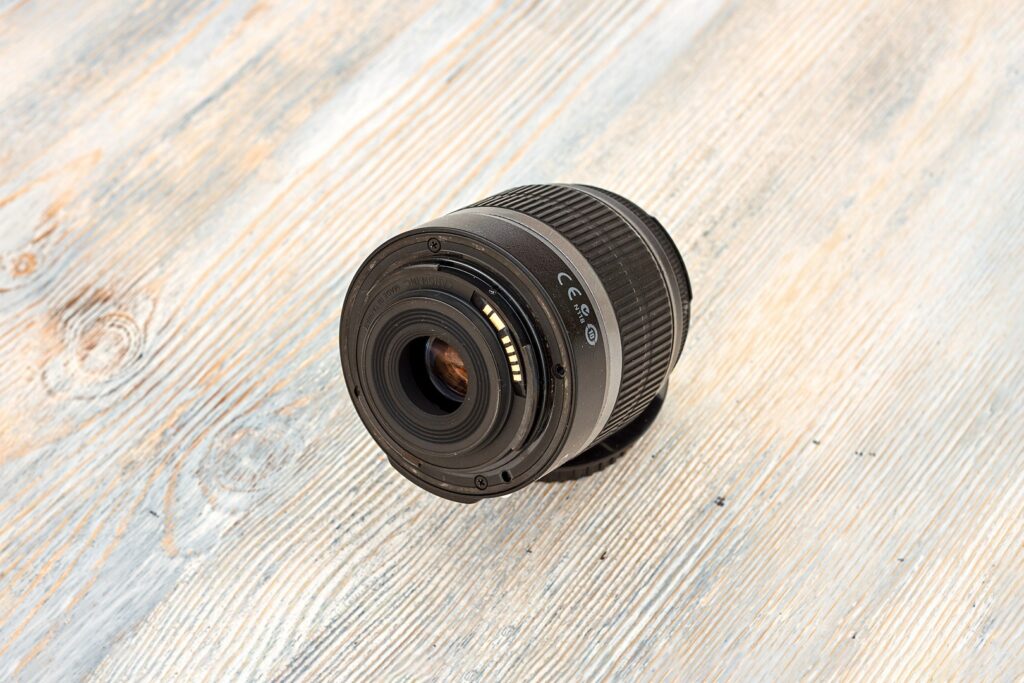 Well, and, of course, in the gallery below

If you develop further, then you can take something from the lenses more seriously for the crop. Immediately, a qualitative leap in the generated images will be noticeable.

All in all, the Canon EF-S 18-55mm has enough features to allow you to print family album photos at a maximum size of 10x15cm. You begin to feel the difference in quality when you put on your camera a lens from the “L” series (the same old Canon EF 28-80 f / 2.8-4 USM). Knowing the obvious shortcomings of the Canon 18-55mm, with skillful handling, nevertheless, something can be pulled out of the lens.

In the early stages, the lens allows you to understand what to focus on in the future. For a beginner, at the time of acquaintance with the technique, a very suitable option. Some manage to shoot masterpieces using optics of this kind. In the secondary market, you can easily find it for a cost of up to two thousand rubles.

But it’s better not to stay with this lens for a long time, since good optics instill love and taste, and bad optics blur the eye. The Canon EF-S 18-55mm f/3.5-5.6 IS isn't a bad lens, it just lives off its value.