Mir-1B 37mm f / 2.8 is a wide-angle lens for small format film cameras. Rebranding of the previous model Mir-1V with a ribbed focusing ring. Mir is a family of wide-angle photographic lenses developed and manufactured in the USSR. They are enlightened anastigmata containing from 5 to 9 lenses. Mir-1V - This is the Mir-1 lens produced at the Vologda Optical Plant.

Most Mir lenses have a retrofocus design: their focal length less than the rear section, which allows them to be used as interchangeable for single-lens reflex cameras with a movable mirror. This lens for review is provided by Vladimir Ekimovsky, for which special thanks to him. 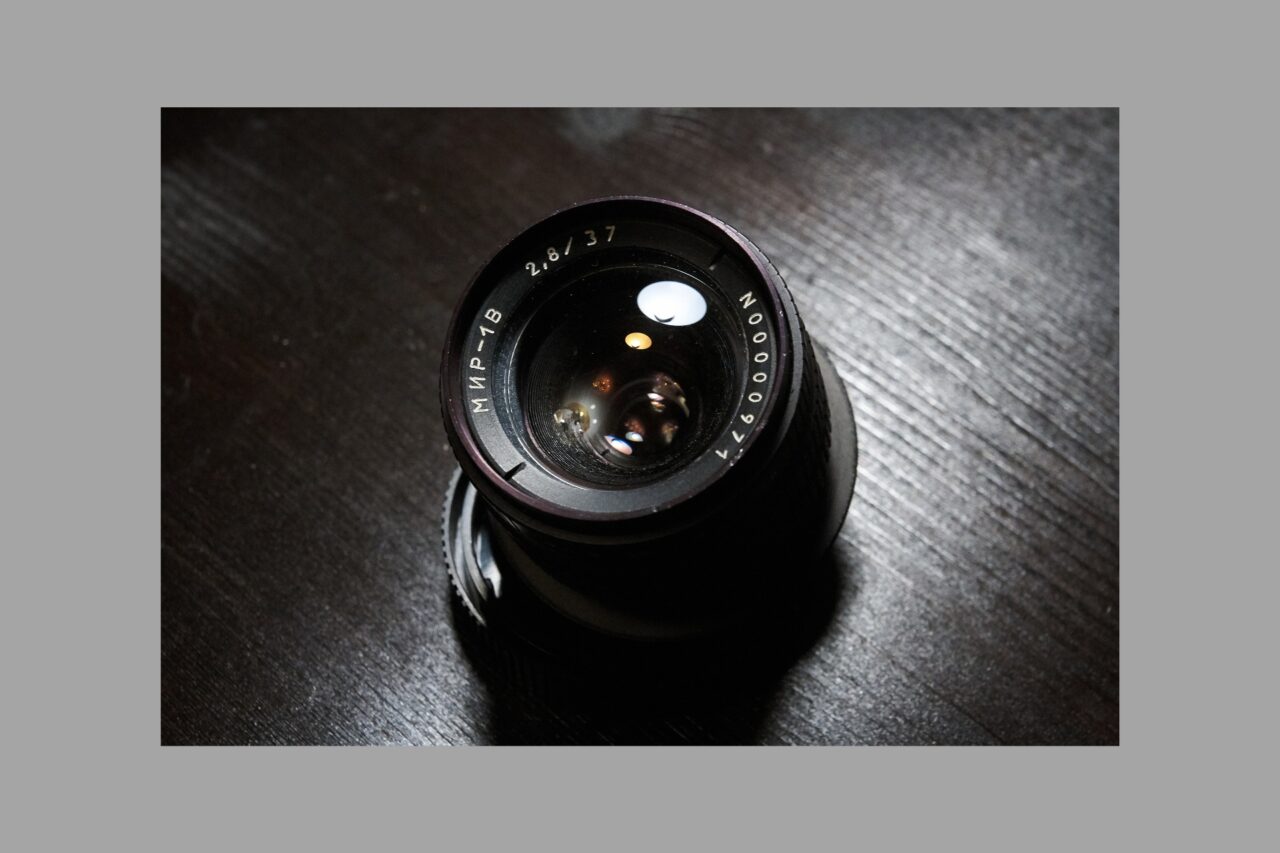 "B" means "Vologda". Miracle, "work of art" VOMZ (Vologda Optical and Mechanical Plant). The model is as long-playing as Helios, the production history is not limited to one modification. This instance is serial number 00000971, with an updated frame, produced after 1990.

The Mir-1 was the first Soviet retro-focus wide-angle lens, made on the principle of an "inverted telephoto lens" and suitable for use with single-lens reflex cameras. It was intended primarily as a replacement for the latest Zenit cameras at that time and for several years remained the widest-angle lens for SLR cameras in the USSR. Variants for television cameras and other equipment were also produced.

For Zenith-4 DSLRs, a special version of the Mir-1 Lens with a central aperture shutter was produced. Mir-1 exists in modifications with m39, m42 threads, for Kiev SLR cameras, with an interchangeable shank (Mir-1A), and even simplified variations of the Shkolnoy type. Applies to wide angle lenses.

Mir-1V is built on the optical scheme of Flektogon lenses from Carl Zeiss recalculated for Soviet glass. 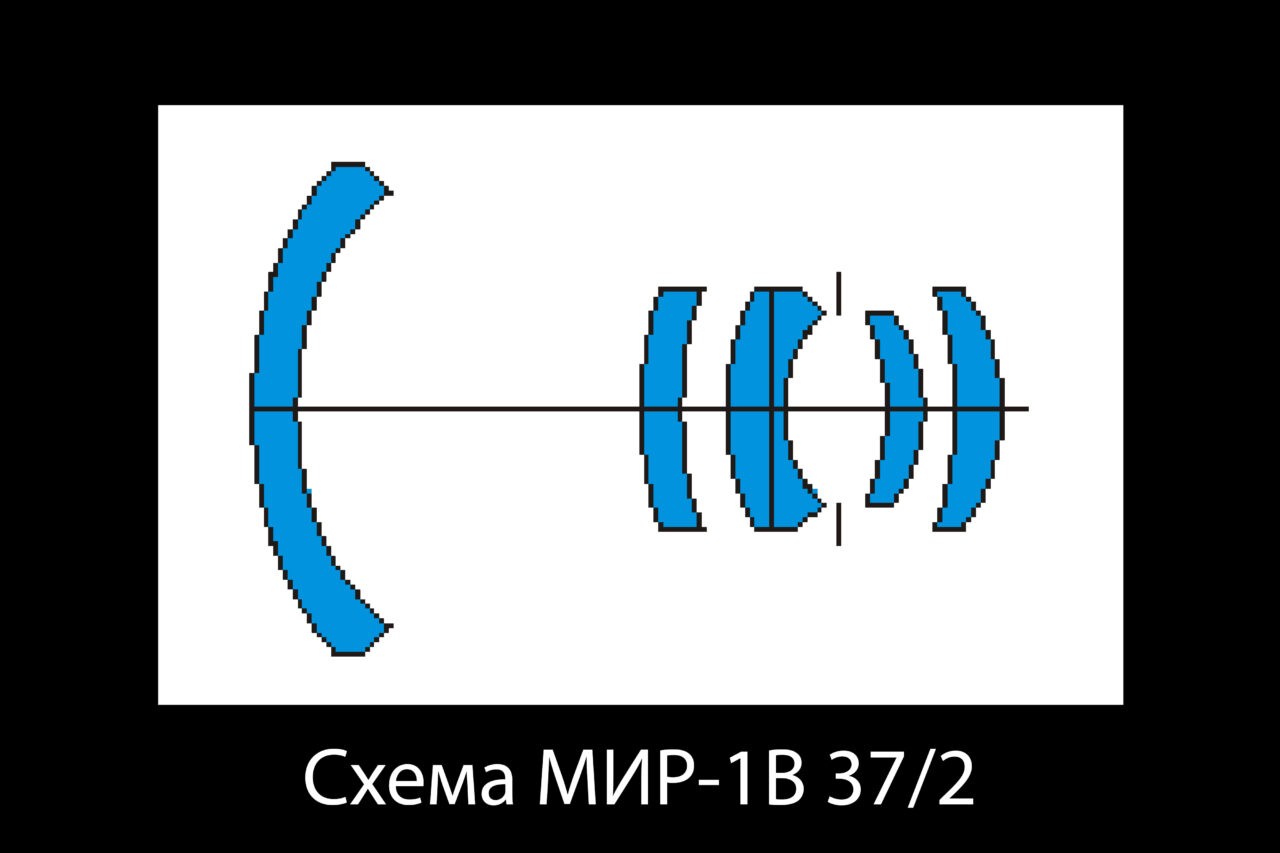 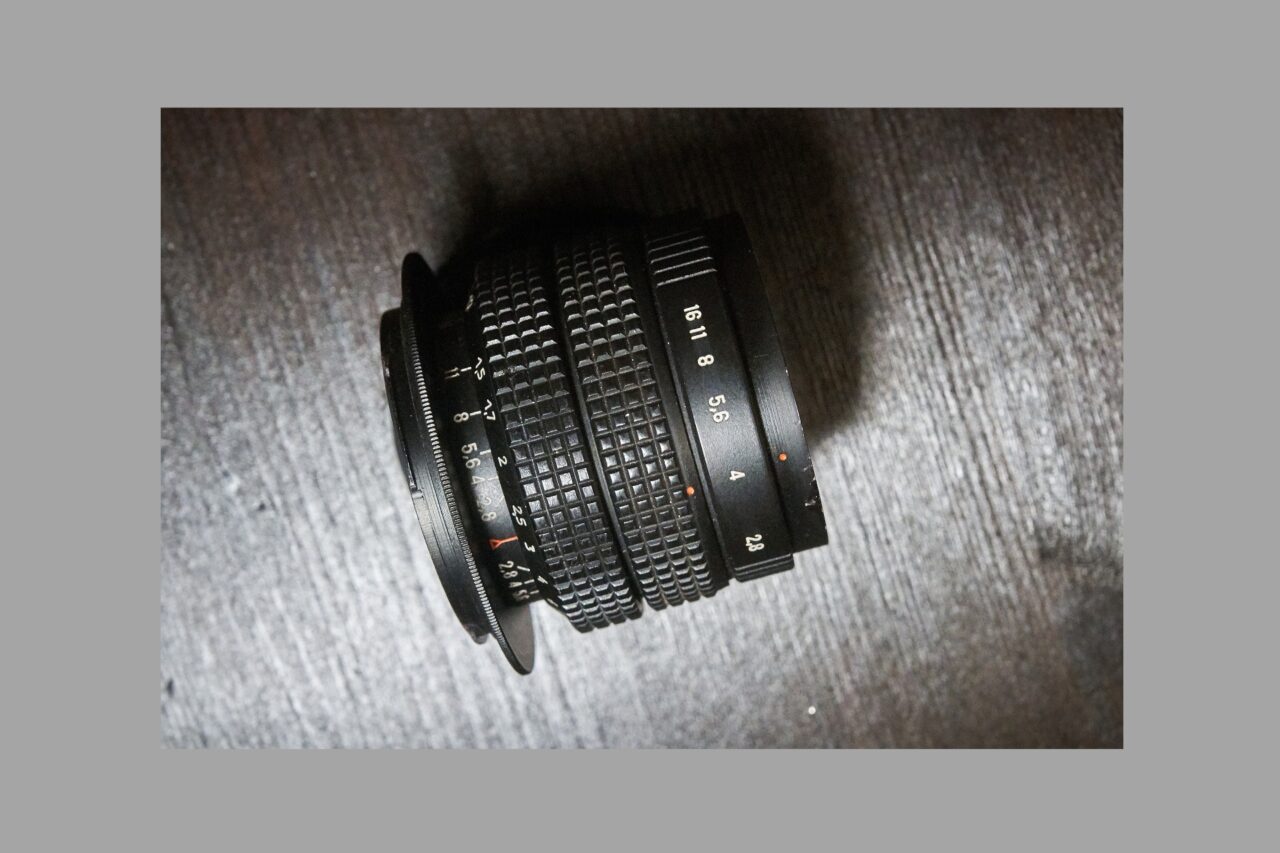 The lens barrel looks good even by modern standards. However, I still liked the previous one more. Still, the optics are retro, and if you cram it into a more modern case, you expect a better product, in line with modernity. But this is not about this lens, alas. Despite the update, nothing has changed optically in the lens. However, I am writing this in comparison with the previous Mir-1B. The body after restyling, of course, is a masterpiece - austere design, metal ribs on the controls, black color. The protruding part above the rear lens has been reduced, this lens may not cling to the mirror of full-frame cameras like earlier versions. There are no complaints about the assembly - nothing backlash, creaks or dangles. The rings spin easily. However, their location raises questions, since when working with the lens with gloves, the aperture ring undoubtedly clings when focusing.

Focusing is performed by the ring closest to the camera. The ring rotates 270 degrees, which seemed redundant to me, since the lens has all the properties of a wide angle. Among them is the high depth of fieldand also poor background blur. During focusing through the viewfinder, and on the screen, the field of focus is very poorly distinguished, especially in the range close to infinity. An example of focusing through the viewfinder:

The focus ring rotates smoothly, even in cold weather. It is easy to knock down the settings, the main thing is not to miss it during operation, since it will not be possible to detect it through the viewfinder. 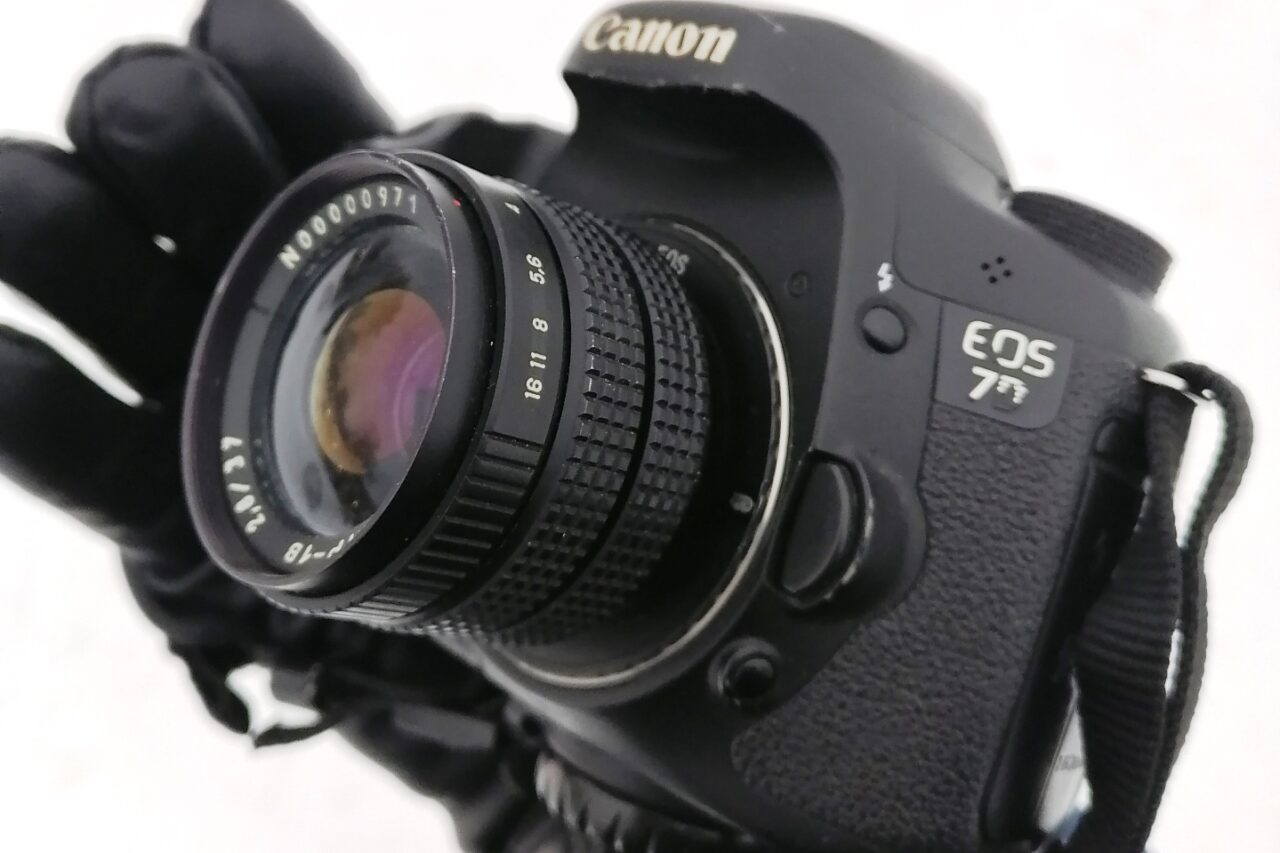 The diaphragm is ten-bladed, in the out-of-focus area it draws circles of highlights. However, this is only available at minimum focusing distances. At the same time, the glare is small, and because of this, it is not very pretty. The petals are dark gray, which creates slight reflections when shooting under bright light sources. 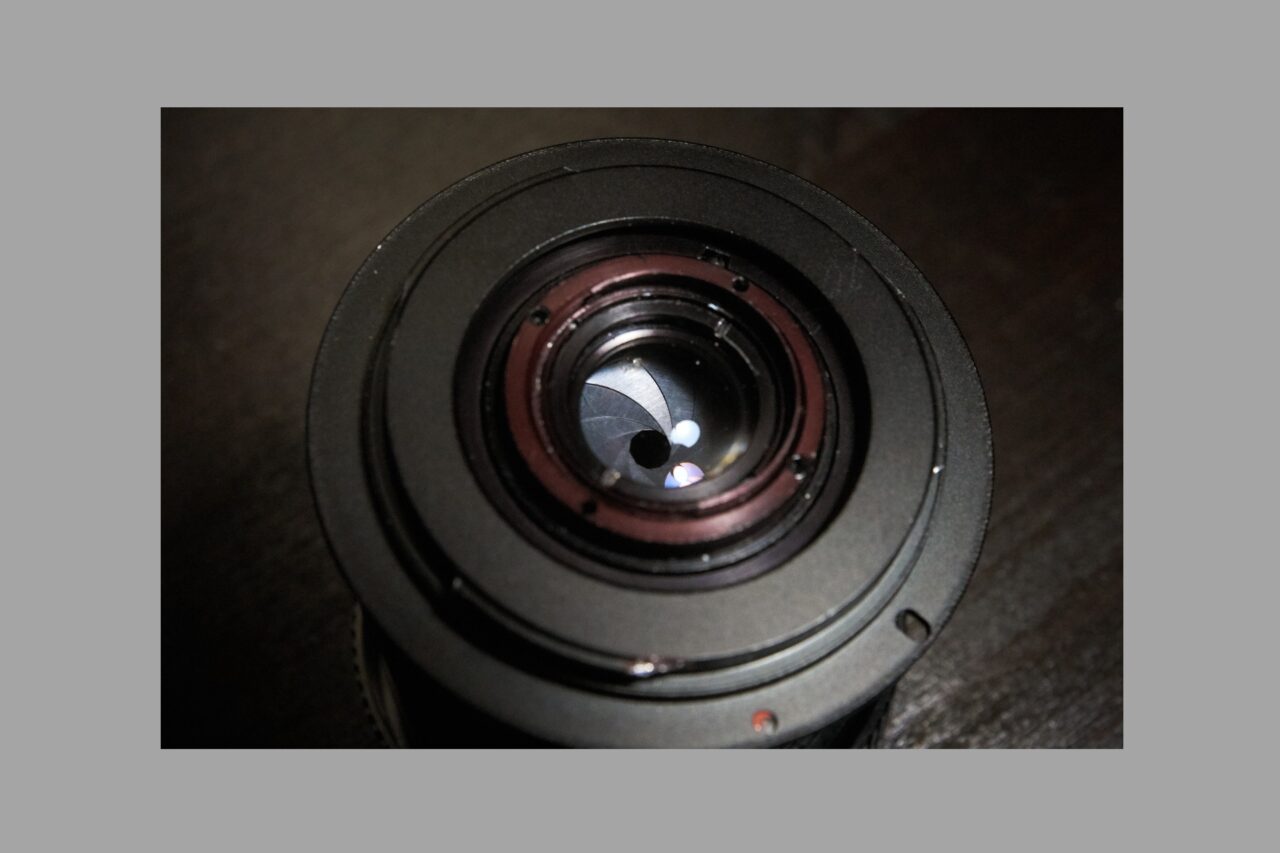 The first ring behind the front lens is the aperture preset ring. In order to use it, it is enough to turn the ring towards the desired value. You can set it to the maximum value of 16, and then the aperture ring can be used in the entire range, but only by eye - the rotation of the ring and the values ​​on the body are inverted. 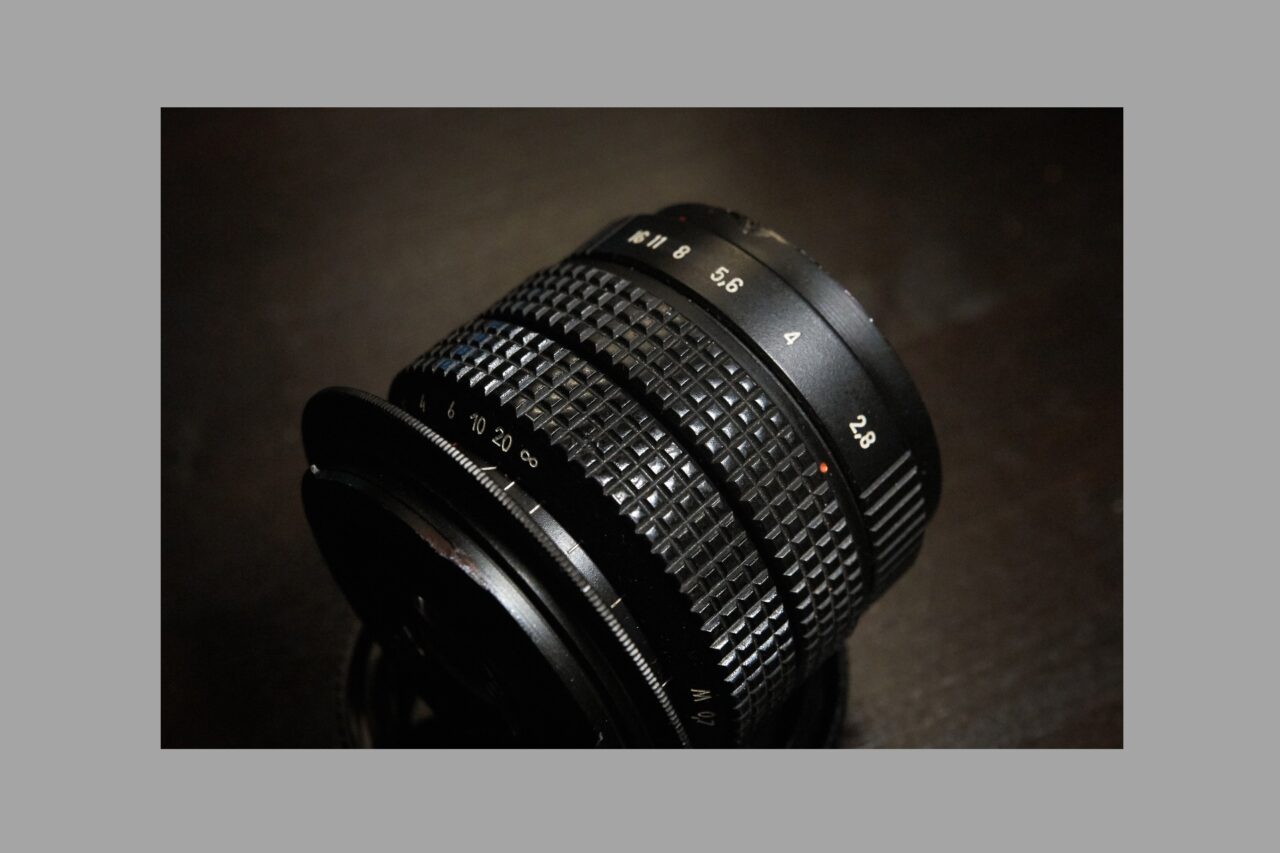 At the same time, you should feel a slight click, confirming that the preset ring is locked. Focusing by turning the ring for the curly knurling at the maximum aperture of the lens aperture, without interrupting the observation of the subject, turn the aperture ring until it stops, and then press the camera shutter button. If the distance to the subject is known in advance, find it on the distance scale and turn the ring to set this value against the red index. The distance to the subject is measured along the optical axis of the lens from the plane of the matrix or film, usually indicated on the camera.

Color aberrations at aperture values ​​up to 5.6, pronounced distortion, moiré, difficulty in controlling sharpness during focusing through the viewfinder, as well as rings that are close and cannot be disassembled by touch, do not add efficiency. The virtual lack of sharpness in the open ... leaves not the best opinion about the lens. However, the test was carried out on a cropped canon 7D camera. Perhaps things are better in full frame. I've seen good references from the full frame. 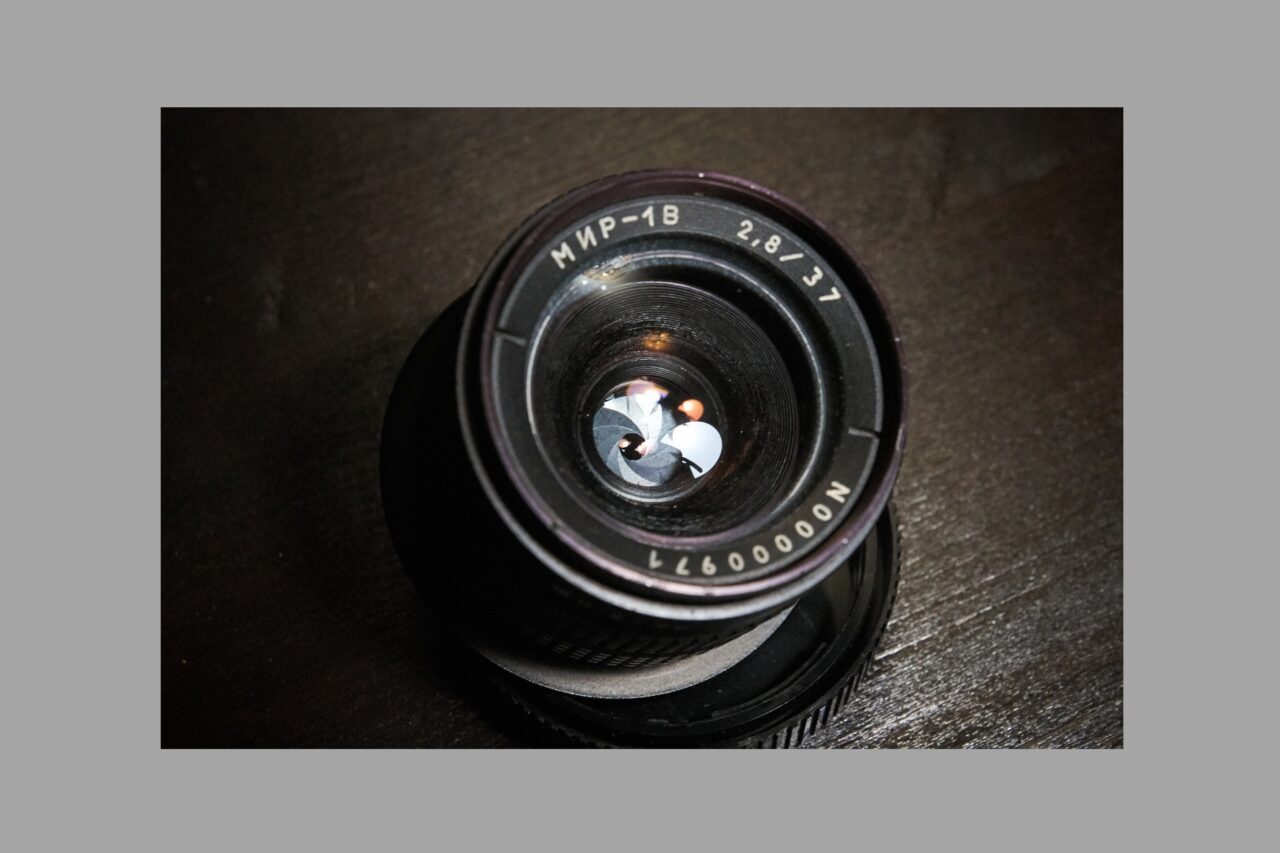 The depth of field of the Mir-1V is not high, like that of portraits. You can immediately understand this just by looking at the focus scale and the depth of field calculator. From aperture 5.6 everything that is from 4 meters to infinity will be sharp. With this lens, you can shoot from the waist without looking into the viewfinder by setting it to hyperfocal distance. Detail and sharpness are normal only in the center up to f / 4 - further across the entire field (Canon 7D). But the problem is to shoot with this lens from close distances, at a aperture that is more open than f / 5.6, because of the very thin depth of field. The focus ring in the range from MDF to infinity has too precise a stroke. 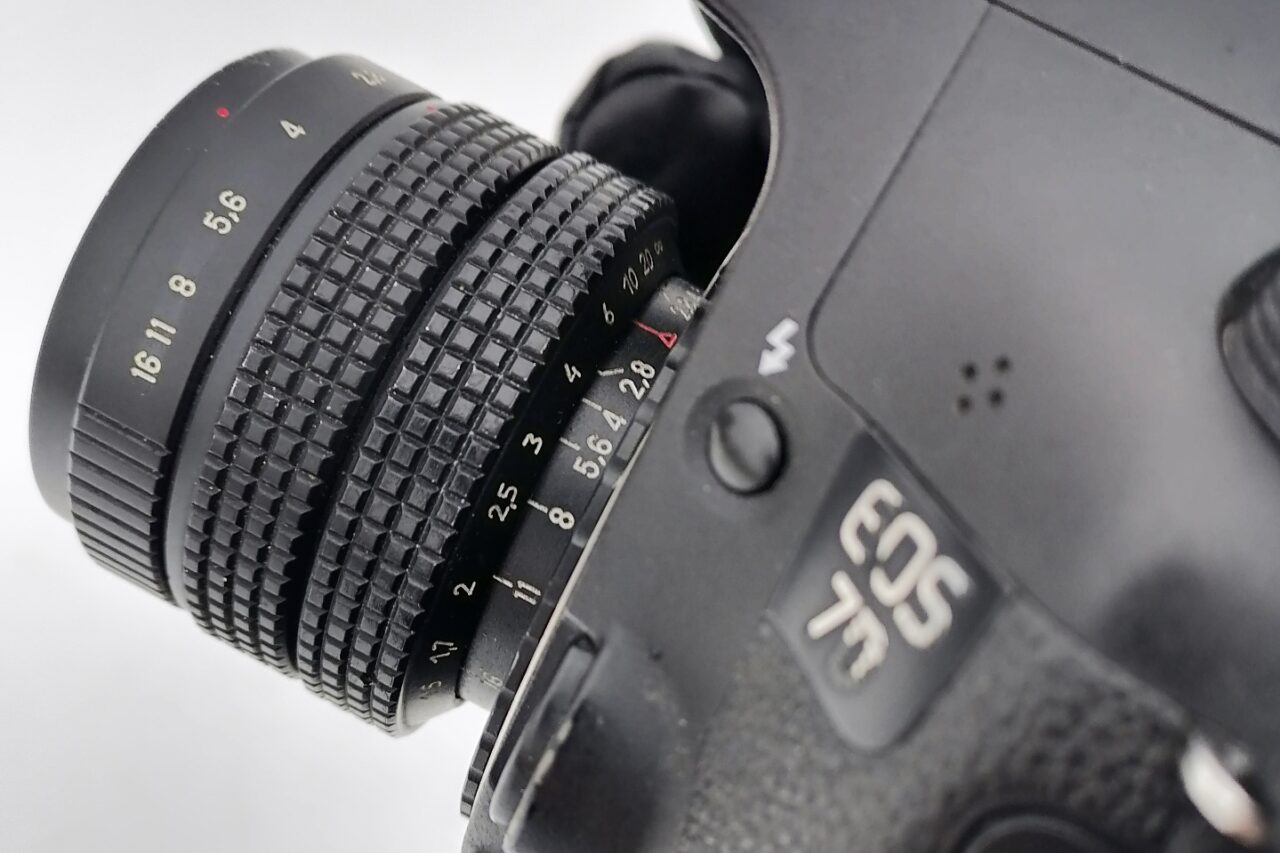 Depth of field at an open aperture (it is not on the crop): 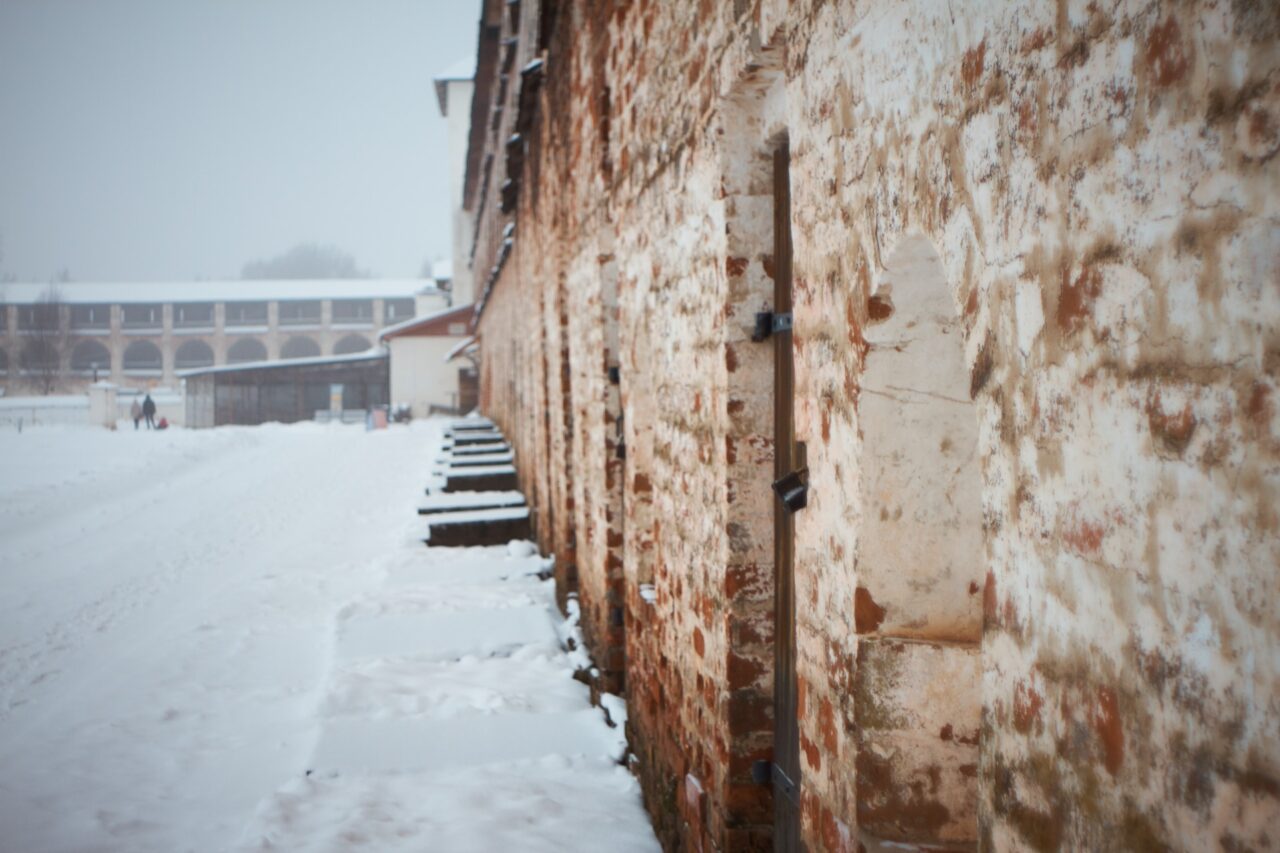 On an open aperture at the edges of the image, the lens seems to double the image. And very strongly chromatite. However, according to the classics, color distortions are removed during post-processing. The bokeh is stooped, like all shirikov. If you try to shoot portraits, then the picture on the workers diaphragmx can be similar in depth of field and background drawing to, for example, a photo from a mobile phone. Well, except for more detail in the field of focus.

The Mir-1V lens is better for shooting in RAW. In general, it is best to shoot in RAW with old optics.

Vignetting on the crop was not noticed, in the full frame it should be present, in principle, according to the classics. But it can be used for artistic purposes, to enhance the emphasis on the photo.

Mir-1V 2.8/37 is not very contrasty by default. Especially when shooting with light sources in the frame. When developing winter photos, in Capture One I had to add +19 to each daytime photo in order to bring the contrast to the level I was interested in. However, everything is purely individual, and in some cases even this did not help. Low contrast allows you to get a little more halftones in the photo, unless, of course, the contrast disappears completely.

If you really want to, then you can purchase. Mir-1B is like a lensbaby - easy to buy and hard to sell. However, thanks to the review and examples of photos below, you now have an idea about this glass, and knowing its features, you can safely bargain with the seller up to 50% of the cost with reason. And even more. 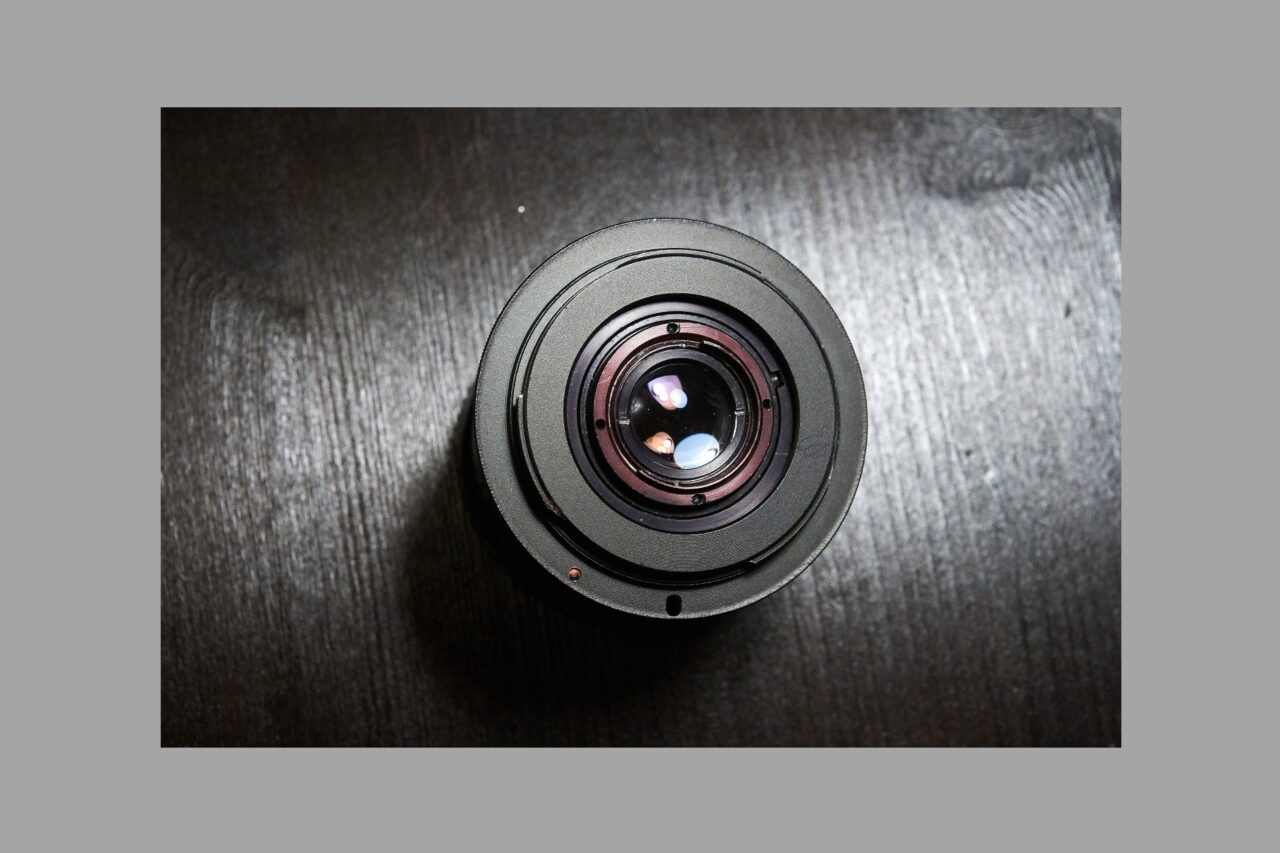 To work on digital cameras, you will need adapter with M42x1. It is most easily installed on cropped Canon EOS with EF-s mount, especially considering that adapters without chips on Canon are inexpensive.

By ordering adapters using the links below, you are helping the project to cover the costs of site maintenance and development. List of adapters, systems and mounts (direct links for ordering):

Mir-1V in a new case on a full-frame camera

Has a field of view similar to a 37mm wide-angle lens. Vignetting will be observed around the edges of the frame when the aperture is open.

Will have a viewing angle, equivalent 59,2mm full frame, angle of view closer to portrait range, properties are not. Vignetting will not be noticeable, depth of field will increase slightly, background blur will be slightly reduced. All other parameters lens they won’t get worse, however, the crop itself, due to the higher pixel density, will be concentrated, albeit in the central, sharper area, nevertheless, the flaws in the optics on it are more noticeable.

The glass is interesting primarily for its appearance and the ability to shoot from the belt without looking through the viewfinder. Well, or as a very inexpensive alternative to modern wide-angle lensIt makes no sense to shoot with an open aperture, since it is, in fact, inoperative. Well, the actual working aperture value with sharpness almost over the entire field on a full frame will be f / 5.6. Glass for an amateur. Despite the fact that the picture seemed to me much better than the version in the old case.