Jupiter-9 2/85 is one of the coolest Soviet portrait painters. Produced at different times at three factories - LZOS, KMZ, Arsenal (Kiev).

Lens for SLR cameras with M42 screw connection. This lens is installed on modern SLR and mirrorless cameras through the appropriate adapter. Read the article about adapters... Jupiter is a family of Zonnar-type anastigmata photographic lenses produced in the USSR since 1948. Most of the "Jupiters" are designed for small format cameras, but the same name is also given to some film-shooting lenses, as well as optics for special types of equipment.

Jupiters with the letter "9" in the name were released almost a dozen species. Three - on cameras "Kiev", two - for SLR cameras "Zenith" of the first issues (threaded connection M39) and four versions for "Zenith" of later modifications with thread M42. The Lytkarinsky plant produced the latest series of lenses with new and old brutal designs. Review lens provided by Vladimir Ekimovsky, for which many thanks to him.

The first models of Jupiter-9 resembled the German Sonnar 8,5cm f / 2, made more roughly and with greater tolerances in metal thickness and with Soviet glass.

Judging by the reviews and the materiel addressed to Jupiter-9, over time, only the mechanics and cosmetics changed, but the optics remained the same throughout the release. 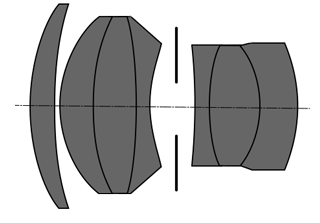 Jupiters are not literal copies, as the original Zonnars require certain types of optical glass that were not produced in the Soviet Union. Therefore, from July 1947 to April 1949 under the direction of optician Mikhail Maltsev 4 lens "Zonnar" were re-calculated at GOI for the range of glasses available in the USSR. Nevertheless, some of them until 1954 were produced at KMZ from exported stocks of German glass under the name "Jupiter". First of all, they copied the interchangeable lenses developed by Ludwig Bertele back in 1932 for Contax cameras, these are Zeiss Sonnar 50 / 1,5; Zeiss Sonnar 50 / 2,0 and Zeiss Sonnar 85 / 2,0. They were intended for a Soviet copy of the same cameras, the production of which was launched at the Kiev plant "Arsenal" under the name "Kiev".

Build quality cannot be determined simply because 43 years have passed since the production of this instance. The lens is very well preserved. Probably because this lens came separately from the camera and was packaged in a bakelite roll-up case.

Frame lens made of aluminum, holds tightly, nothing loosens anywhere. The design seemed to me similar to one of the versions of the Mir-1V, in which the controls are located identically, and the preset rings, apertures are strikingly different from the focusing ring.

It is immediately felt that an understanding person was engaged in the design of the frame. The lens is not voluminous, its height slightly differs from the "Helios" in a larger direction, and the front lens is strongly curved and protrudes almost flush with its frame, so there is a certain risk of damaging it if you do not use the hood as a protection or be inattentive when carrying.

The focusing ring is much larger than the rest of the rings, the front lens does not rotate when using the ring. The coverage is wide, it immediately becomes clear that the lens has a thin DOF and implies a portrait past (and present :)) even though the calculator is on the body. And if you look at the depth of field calculator, it becomes sad. It’s sad that it’s impossible to get into sharpness in the viewfinder.

Even with an adapter and a 5.6 aperture focus confirmation you are able to miss the confirmation very well. Using LV is not as convenient as we would like, but still, it is necessary. The lens is not intended for shooting dynamics, from the word at all. His element is calm measured photographing of girls, girls, women.