Elikon-535 is a scale compact camera of the USSR with manual exposure setting, designed for beginner amateur photographers. Released in the 1990s. The last camera developed by BelOMO.

When you dig in the direction of the soap dishes of the USSR, it may suddenly turn out that most of the soap dishes, including quite advanced ones, were produced by the Belarusian Optical-Mechanical Enterprise. And once again, having seen a photo of a compact from afar with an image quality of 10 jackals out of 10, the first thought flies - “Belarus!”. That is how it is. Another Belarusian. Plastic, lightweight. Your.

The body is completely plastic, and as usual, a closer look reveals a rough finish to the panels. One gets the feeling that the casting was made in fairly similar forms. But at the same time, the edges are not processed, and the painting has a large texture, which initially forms the impression of production without enthusiasm, and with lowered sleeves, as they say. But this is by no means a stone in the direction of the manufacturer, but on the contrary, as it were, causes admiration. It works, and works better than the stillborn Zenit-KM, which was an adult, but not quite mature. 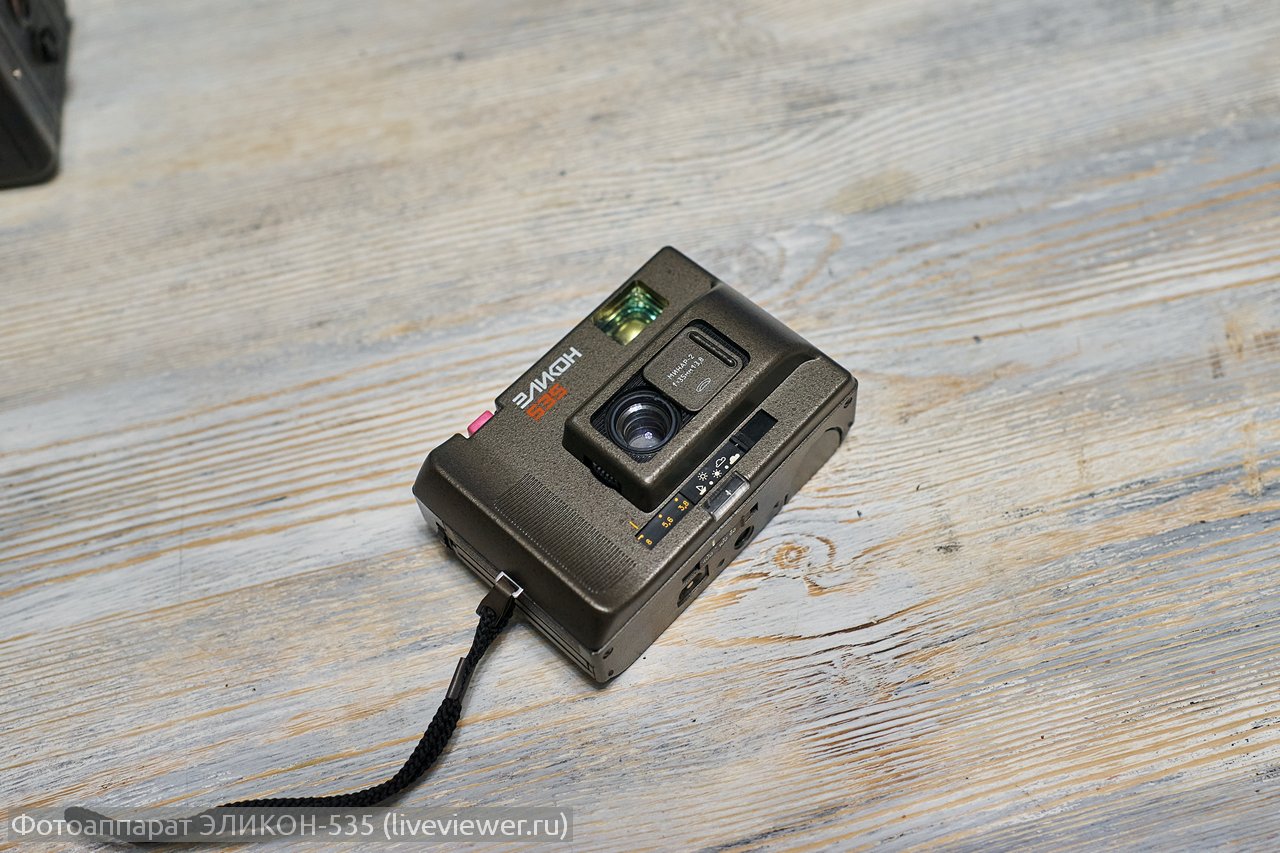 Elikon 535 is a continuation of a series of miniature scale cameras of caseless design, which used type 135 film with a frame size of 36x24mm. The body of the camera is plastic, and was painted in several colors:

Judging by the fact that black and gray cases appear in the bulk of the reviews, the brown Elicon-535 is a very rare thing. According to the catalog 1200 cameras of the USSR Elikon-535 belongs to the Minsk group of cameras, which also includes the unreleased Elikon-5 and, the most advanced, Elikon autofocus. Issue 1990-1991 Produced about 150 copies. The smallest camera of the Elikon family. Peculiarities: 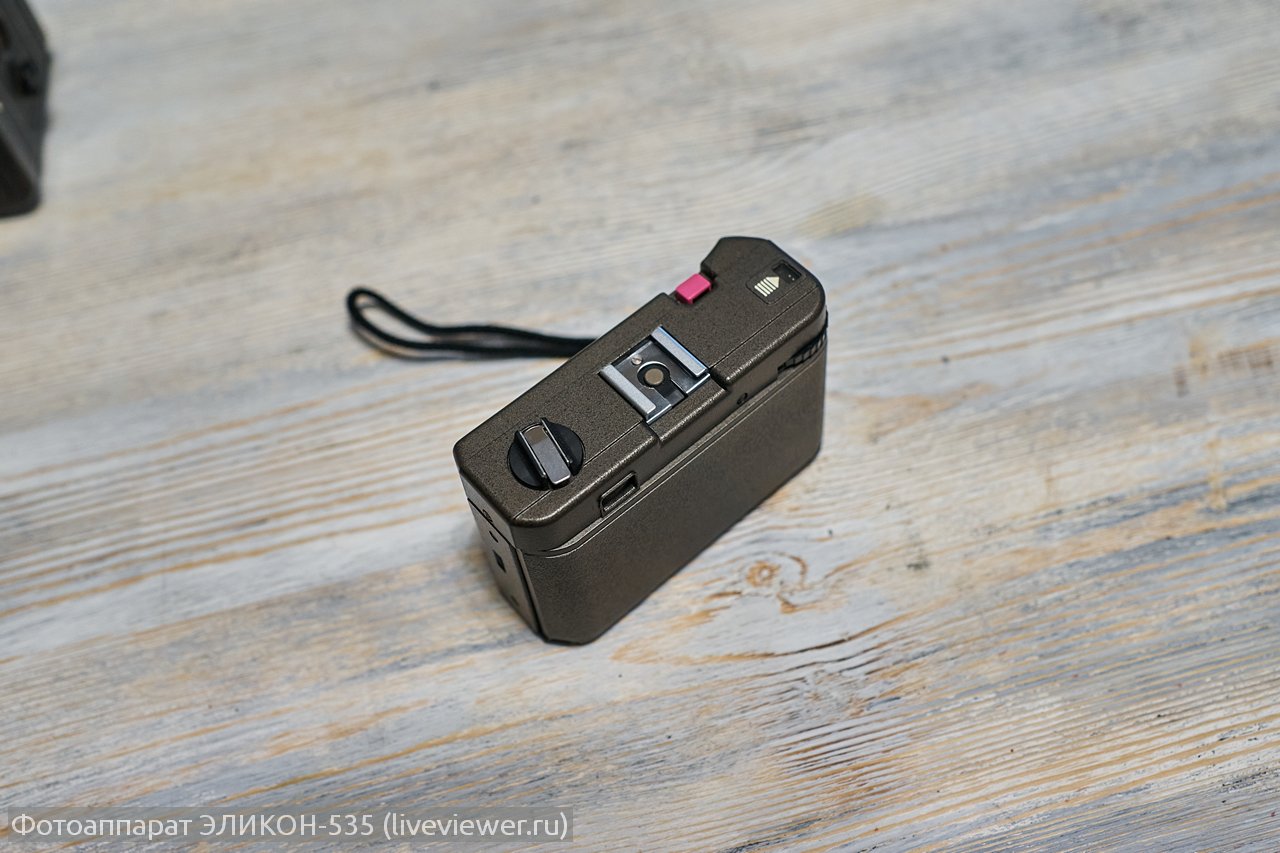 Camera lens - "Minar-2". Finished / renamed series of lenses "Minitar" developed by GOI them. Vavilov. This lens had a movable middle group, which made it possible to create truly miniature cameras. These lenses have vignetting by default, which is common to all such lenses. In general, Minitar and Minars were optically equal, if not superior, to foreign models of those years.

The shutter of the camera is located behind the lens, it is also the aperture. Film advance and cocking are combined. The descent works hard. Shutter speed and aperture have a continuous relationship, the shutter works out shutter speeds from 1/90 at an open aperture, up to 1/512 at f/8, f/11 and f/16 apertures. On the scale of the camera under the lens, not all aperture modes are indicated, there are intermediate values. The general view of the combinations of the worked out ekpopar looks like this: 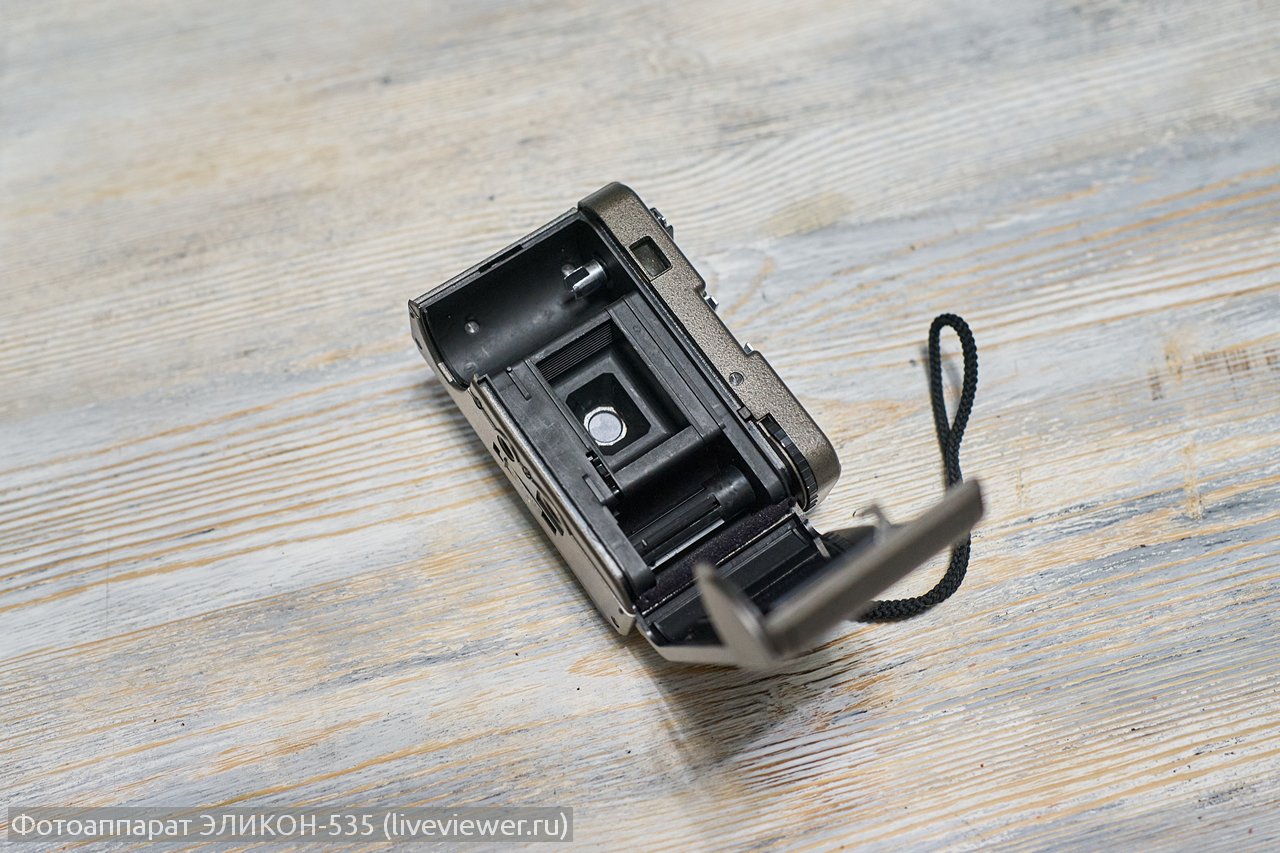 Intermediate values ​​are necessary for correct working out in non-standard conditions. Since the camera is scale, then working with it involves a situational approach. Actually, in order not to bother the user's head, the camera has scales both for setting the exposure and for focusing. Pictograms in the instructions are duplicated by focusing distance values

On the camera, only icons are placed. Setting exposure to pictures is an interesting and entertaining thing. Management does not imply an operational change of parameters. In other words, you must first look at all these disks and sliders, and then only remove them. In the viewfinder, unlike the Elikon-35SM cameras, the meaning of the icons with the focusing distance is not duplicated. There are only limits.

For use with an external flash on a camera shoe with a center sync contact. Having an electronic flash with you, you could shoot almost anywhere. 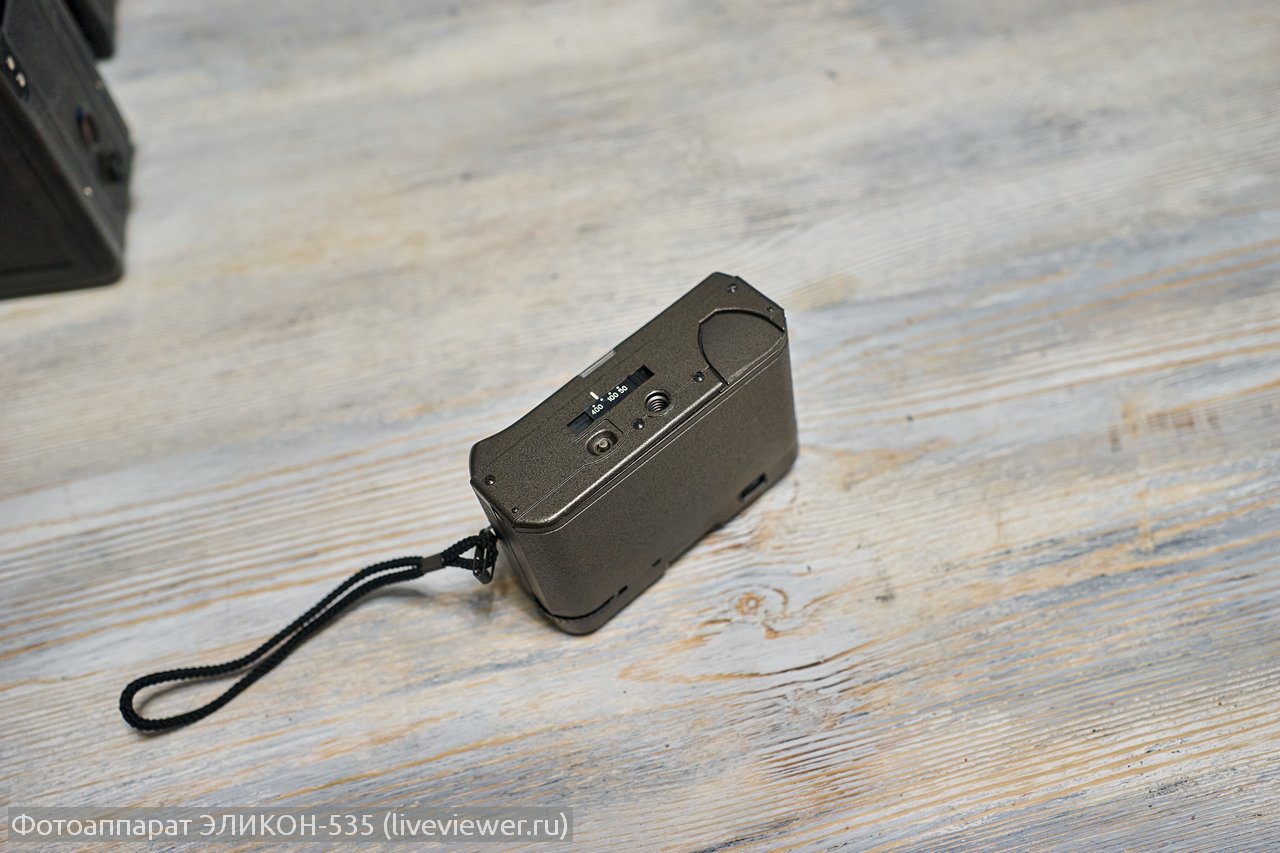 Film loading is simple and straightforward - under the opening back panel. The tongue is pushed into the slot of the receiving coil and after the control platoon you can take pictures. The frame counter has an automatic self-reset. The ISO values ​​available for input are located on the bottom of the camera, next to the film rewind button. Available values ​​are ISO 50, 100, 200, 400.

And finally, about the general impression of the camera. This is an interesting soap dish from the point of view of that time, which greatly simplifies the entrance to the wonderful world of photography. Focusing on the symbols, the user could, in most cases, get sufficient quality photos without delving into all your “shutter speeds and apertures”. But. If the freedom of choice and self-setting of scales and shutter speeds were replaced by just one button, no Chinese and Japanese soap dishes could conquer the market. Even the extended two-year warranty did not save here.

Simultaneously with the work on the creation of the Elikon-535 camera, an alternative Elikon-5 model was being developed, which was distinguished by the presence of a built-in flash. By decision of the Council of Chief Designers for Amateur Photographic Equipment of September 24, 1987, Elikon-5 was supposed to become a commercial model for BelOMO (along with the Elikon-35SM camera), but in mass production did not do so. As of 1989, an unknown number of prototypes had been assembled.