Dismantling and maintenance of Helios 44M-4

Good afternoon, here we will disassemble Helios 44M-4 and service it. Helios 44m 4 is easier to disassemble in comparison with earlier models such as Helios-44, Helios-44M. Lenses also suffer from the disease of lack of smoothness and wedging of the focusing ring. This is due to the fact that some lenses were released more than 40 years ago and during their operation / lying in the cabinet, the grease that was put on the threaded connection from the factory simply dried out. 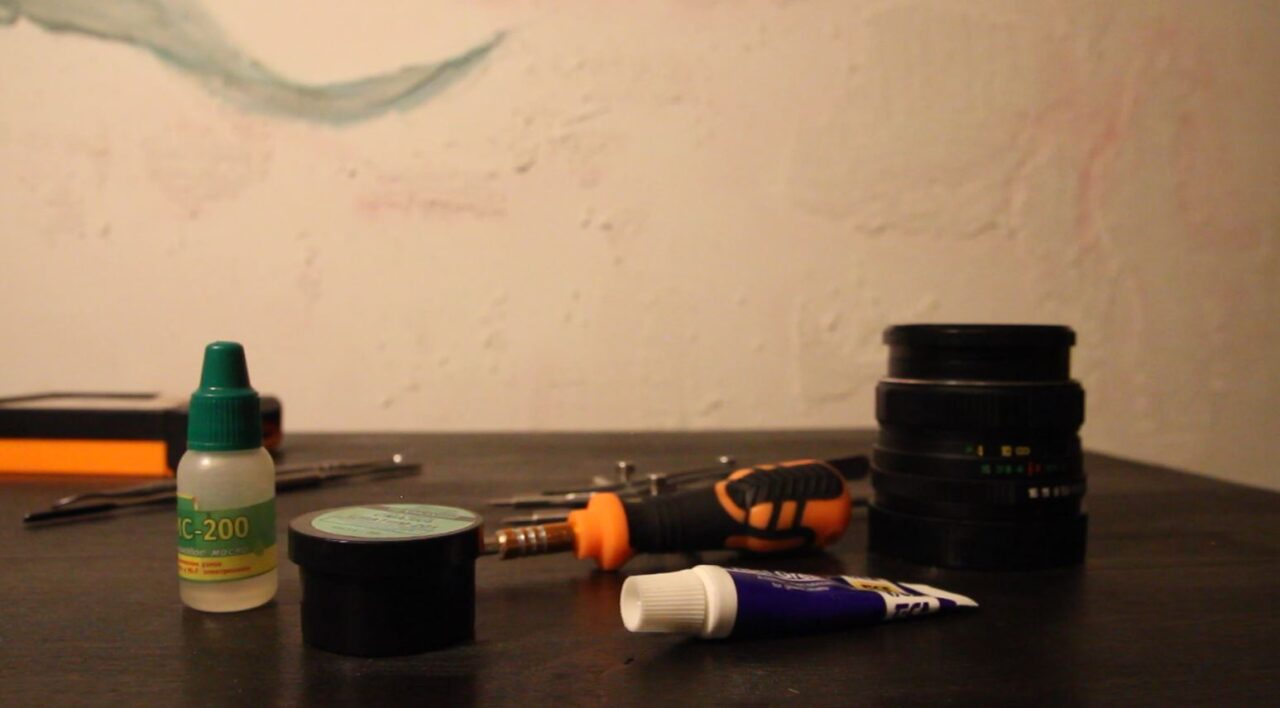 For disassembly lens and its subsequent lubrication, we need a slotted screwdriver, (the thinner the better) tweezers. As a base, I use CIATIM-201 grease, I dilute it with medium viscosity Tika grease for fishing reels. You can also add instrument silicone oil. I have 200, but 400 is better. 200, because it is universal. Tsiatim and Tica are mixed in a ratio of 2 to 3. Tsiatim perfectly clogs the unevenness of the thread, and Tica promotes smooth movement. Moreover, if you simply lubricate with CIATIM, or any other dense grease, then in the cold it will become hardened and the ring will not turn. 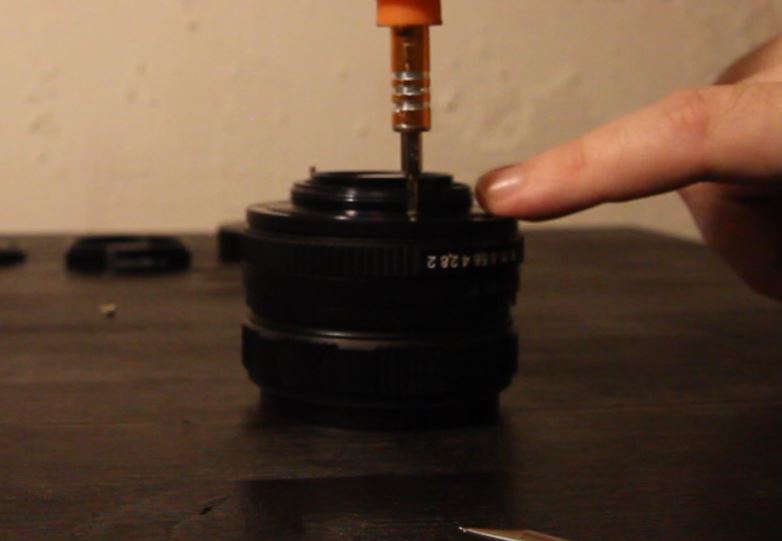 We expose the lens to infinity. Disassembly starts with the diaphragm pressure mechanism, at the back it is fastened with 4 screws. The drive pin is kicked by the zenith when the release button is pressed:

Steel screws, aluminum frame. Such a connection will sour, and you have to loosen the screws by tapping and blotting the WD-40. In this regard, Helios-44M-4 is easier to disassemble because there are no such ubiquitous small, microscopic screws that do not unscrew, but also fall apart with the application of force. 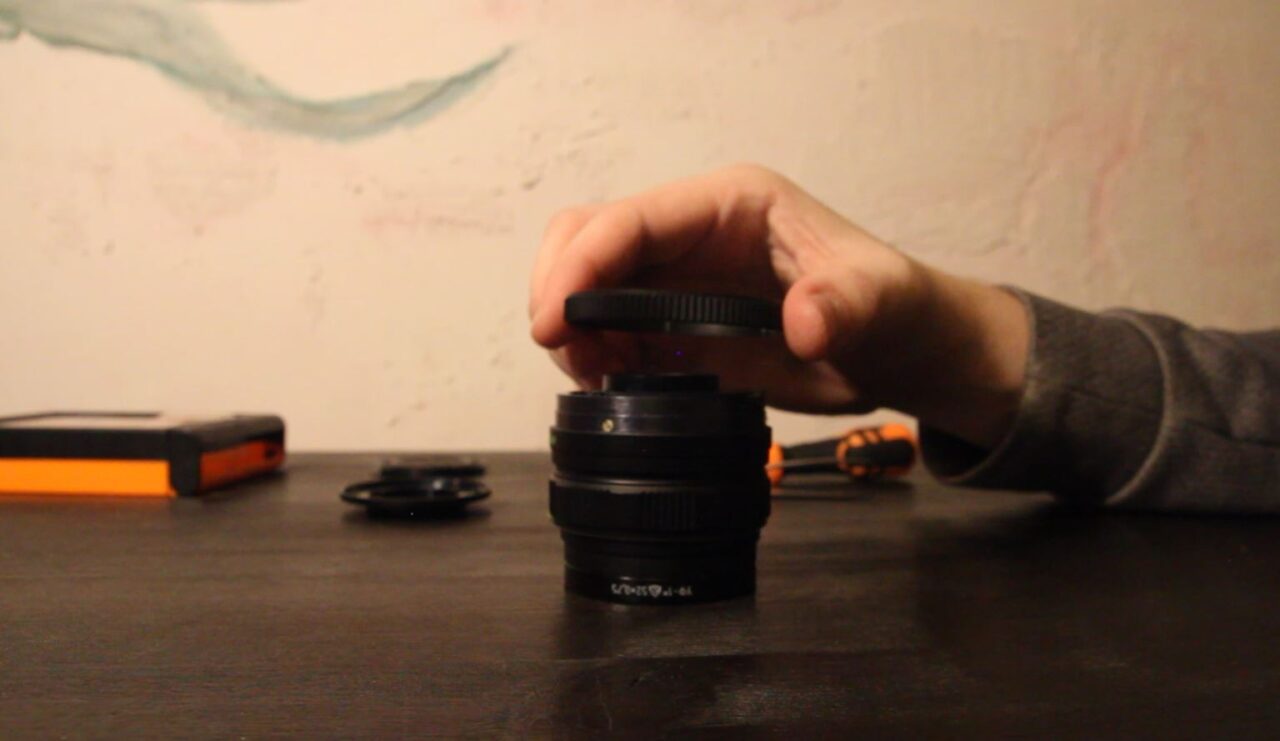 Next, the diaphragm control ring is removed, behind it - the outer ring with marked marks is attached to the base with three screws. Before removing the diaphragm ring, you should concentrate as much as possible, since the ring is propped up by a ratchet ball. If the spring is not completely slack, then the ball will shoot out. 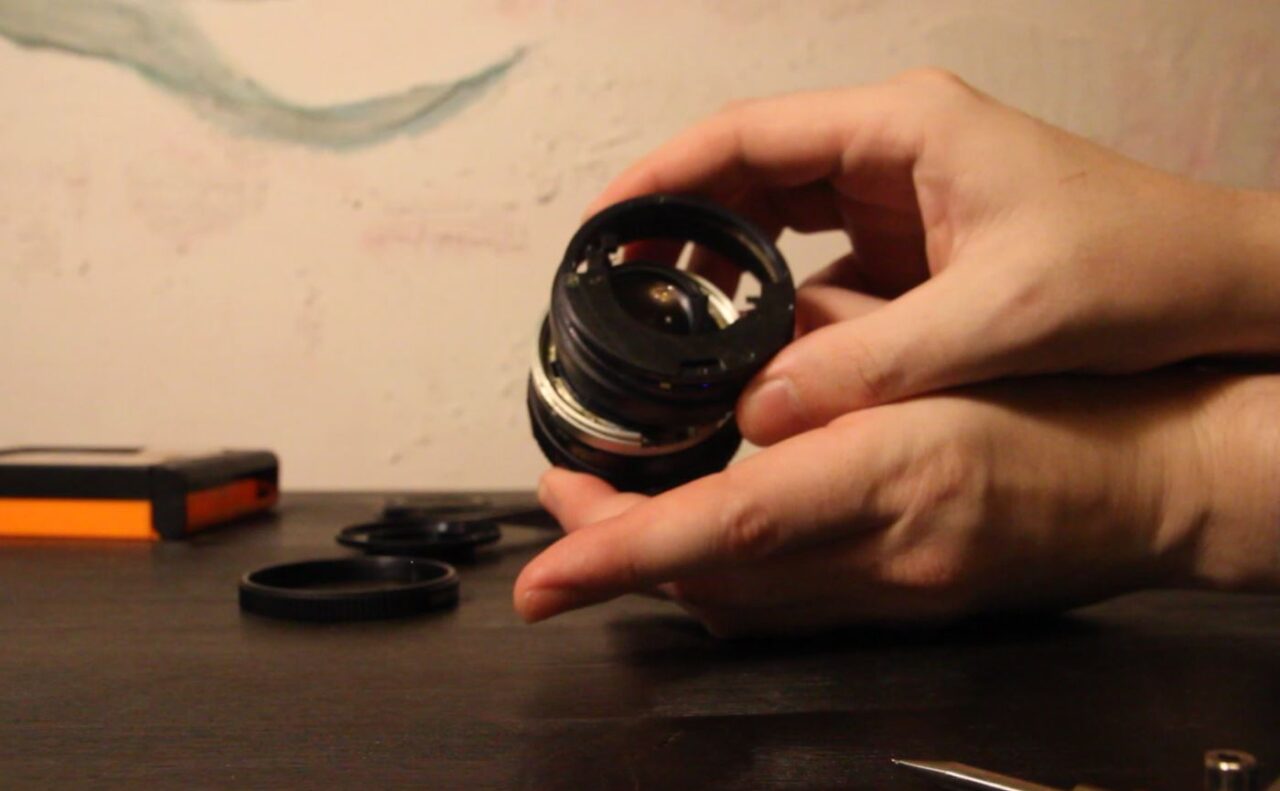 The next stage is the lubrication itself. You can unscrew the focuser stopper, or you can remove the guides and unscrew the helicoid lens to the maximum, releasing the thread. 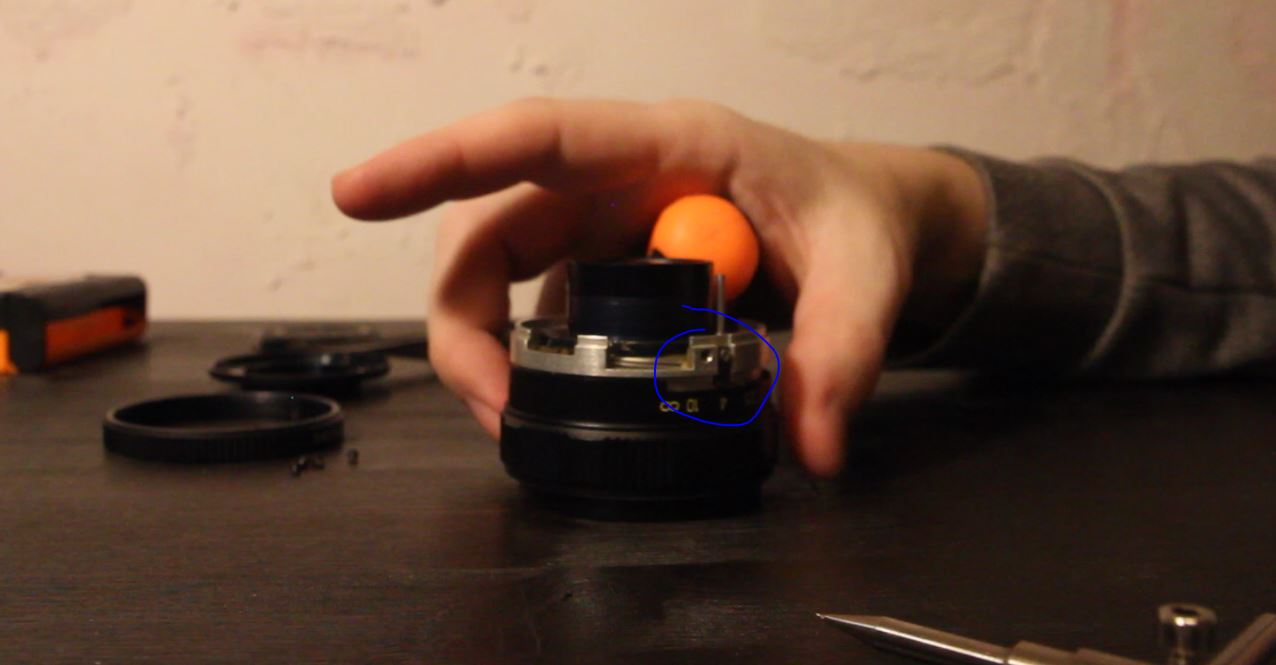 The main thing is not to overdo it - if the helicoid falls out, inserting it will be a very nontrivial task, since the thread lens on the helicoid multi-way. It is better to twist slowly, and leave marks just before the very end. 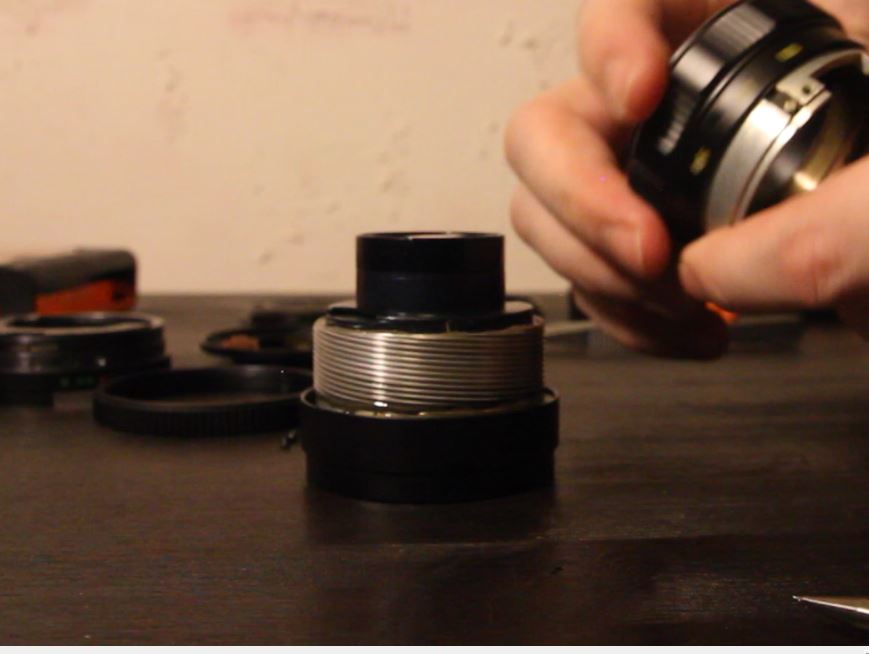 The next thread to be lubricated is the thread of the focus ring. To remove the ring, you need to unscrew the stopper, and this is enough. The thread is ordinary, there will be no problems here. 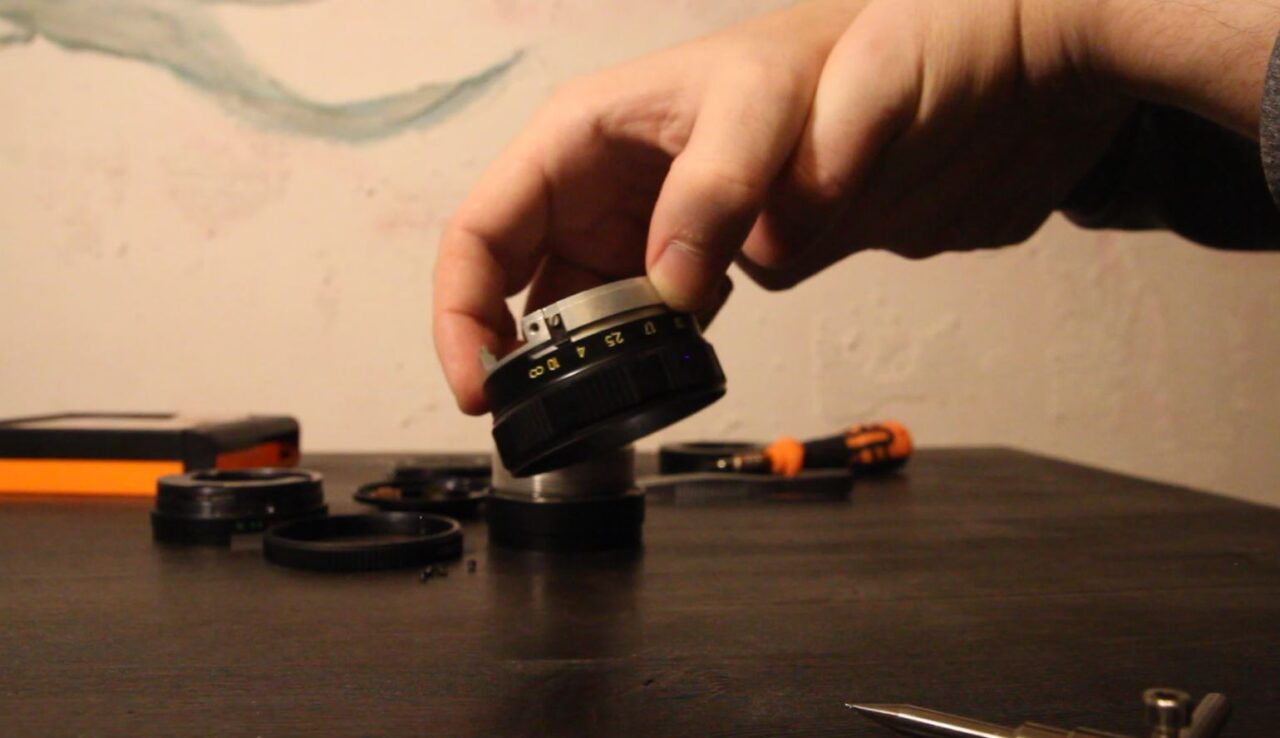 You do not need to put grease under the diaphragm ring, since it will not help - the processing is rough, and in order to achieve a smooth ride, while losing fixation, you can remove the ratchet ball. The diaphragm drive mechanism can be lubricated, of course, but most likely it is no longer needed. I usually don't touch him.
The guides of the helicoid are also better lubricated, and you can also adjust them at the same time. There is one guide with a slot, the second without.
The lens is assembled in the reverse order.

A lot of details on the video. Thank you for the attention.

2 comments to "Disassembly and maintenance of Helios 44M-4"