FED-4 - Soviet rangefinder camera with interchangeable lenses, produced from 1964 to 1982 of the last century Kharkiv Labor Commune named after Felix Edmundovich Dzerzhinsky (Ukraine), which by that time existed as a large plant for the production of cameras and optical instruments.

FED-4 - development of FED rangefinder cameras. The production began three years after the start of production of FED-3. Produced in parallel. Along with the innovations of the previous model FED-3, a selenium unpaired exposure meter was added to this camera. The larger set of shutter speeds available for use is now a feature for the entire line of FED cameras. The FED-4 had a rangefinder combined with the viewfinder with a base reduced to 2mm compared to the FED-41. The cameras were produced with a selenium exposure meter. In order to fit everything under the top cover, its dimensions had to be increased further. The optics were installed on an outdated M39 connection (Leica Screw Mount). 633 copies were produced. 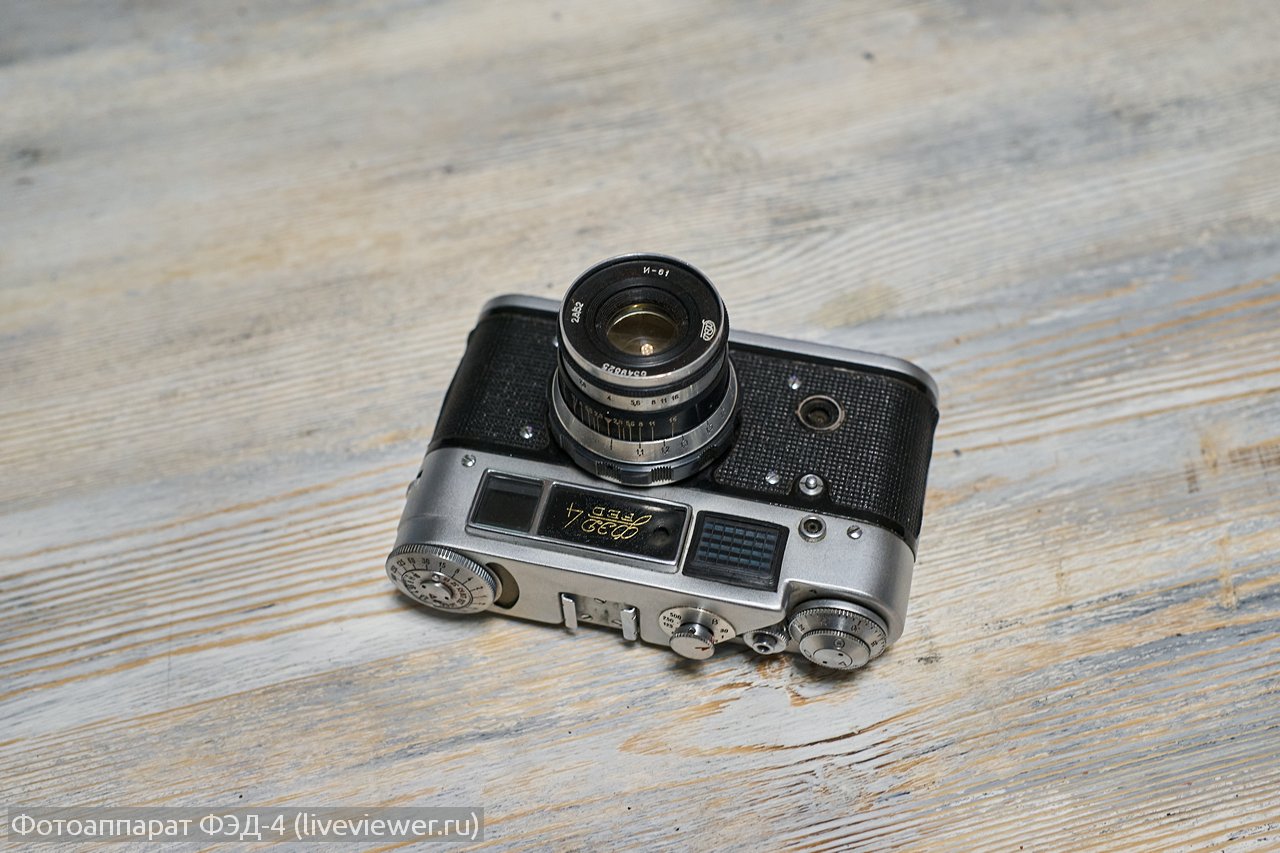 FED-4 was exported abroad, had the name Revue-4, and served as a source of foreign exchange for the USSR.

FED-4 was sold with the following lenses:

Distinctive features of the FED-4 model:

According to the catalog "1200 cameras of the USSR" FED-4 has the following modifications:

Refers to a group of cameras equipped with a selenium exposure meter. 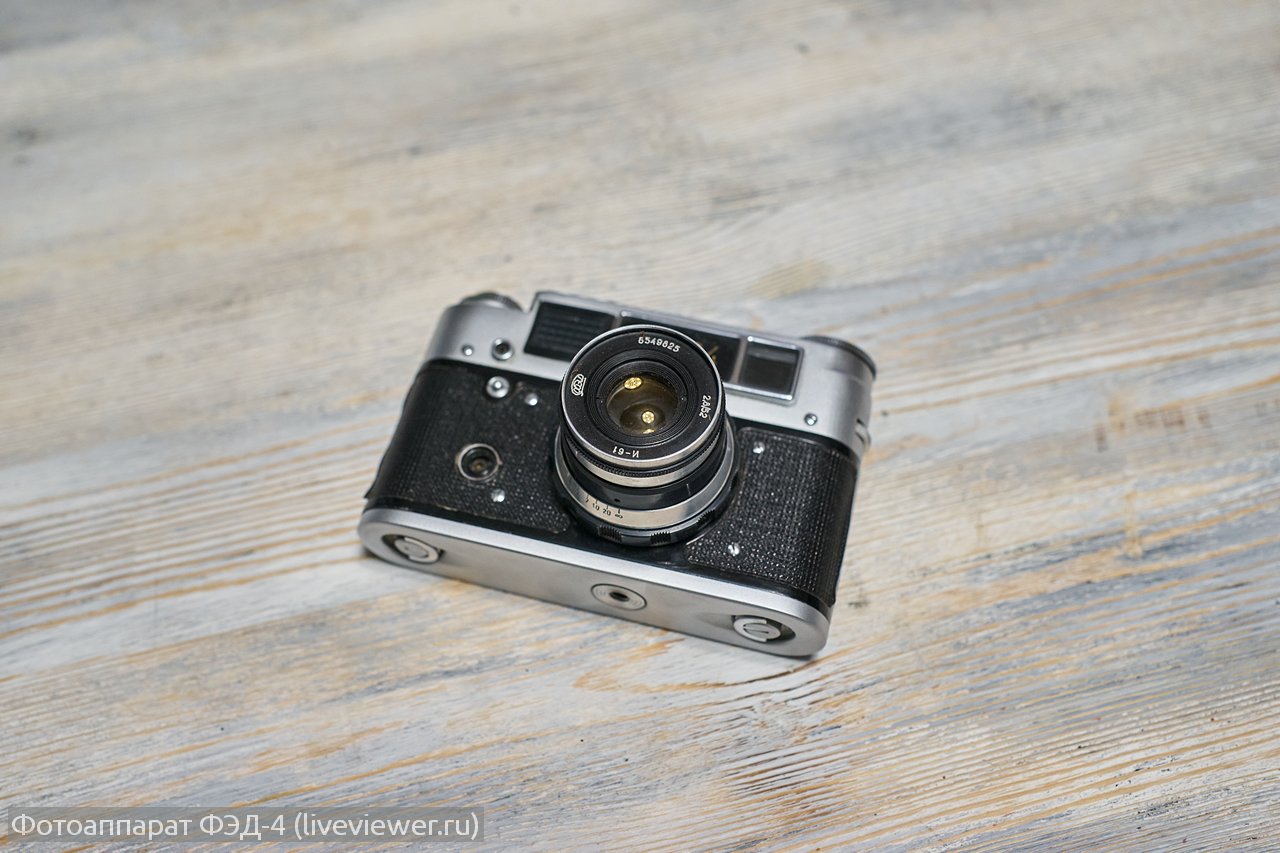 FED-4 for 1964 release, although it had an outdated lens mount. It had a combined rangefinder with a viewfinder, but at the same time, focusing less than one meter was not available for the lenses of these rangefinder cameras. There was an extensive park of optics, which made it possible to install various lenses with a standardized focal distance without adjusting the rangefinder, and the standard lenses of the Industar series initially had good image quality, unlike most of what is now equipped with cameras with interchangeable lenses in the kit.

The main inconvenience when working with the rangefinder FED-4 was the inability to see the image from the lens. The rangefinder and viewfinder were a separate system that only gave an informational view of focusing. There was no way to visually determine the depth of field, so we used the depth-of-field scale from the lenses. 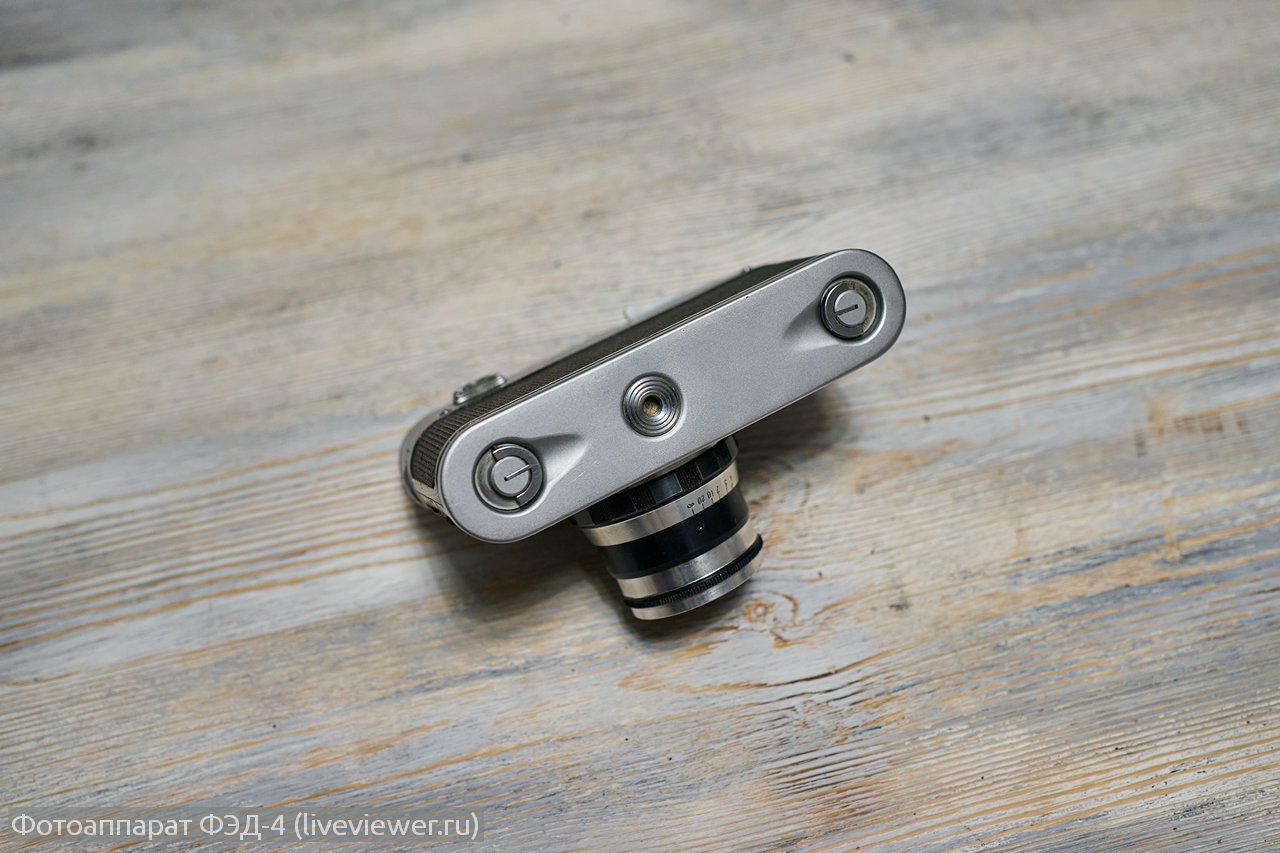 Impeccable quality of manufacture of exterior parts and finishing FED-4. No backlash, no creaks. The gaps between the panels are minimal, the back wall can be folded back, but closed with two locks. The chamber bodies had upper and lower parts made of electrochemically painted brass.

All controls of FED-4 are concentrated on the top cover. Here is a dial for setting the shutter speeds, a drive for the shutter cocking device and film advance, as well as a reminder of the film sensitivity. The release button with activation of the film winding mode back to the take-up spool is located between the shoe and the shutter cocking device, and the accessory shoe itself, which could mainly accommodate flashes or various devices such as a revolving or single viewfinder, is located at the highest point of the top cover. Film rewind was invented, it seems, by those who in the USSR sculpted the flygegeheim with public money before it became mainstream, and therefore were shot on the spot without trial or investigation. Really stupid solution. 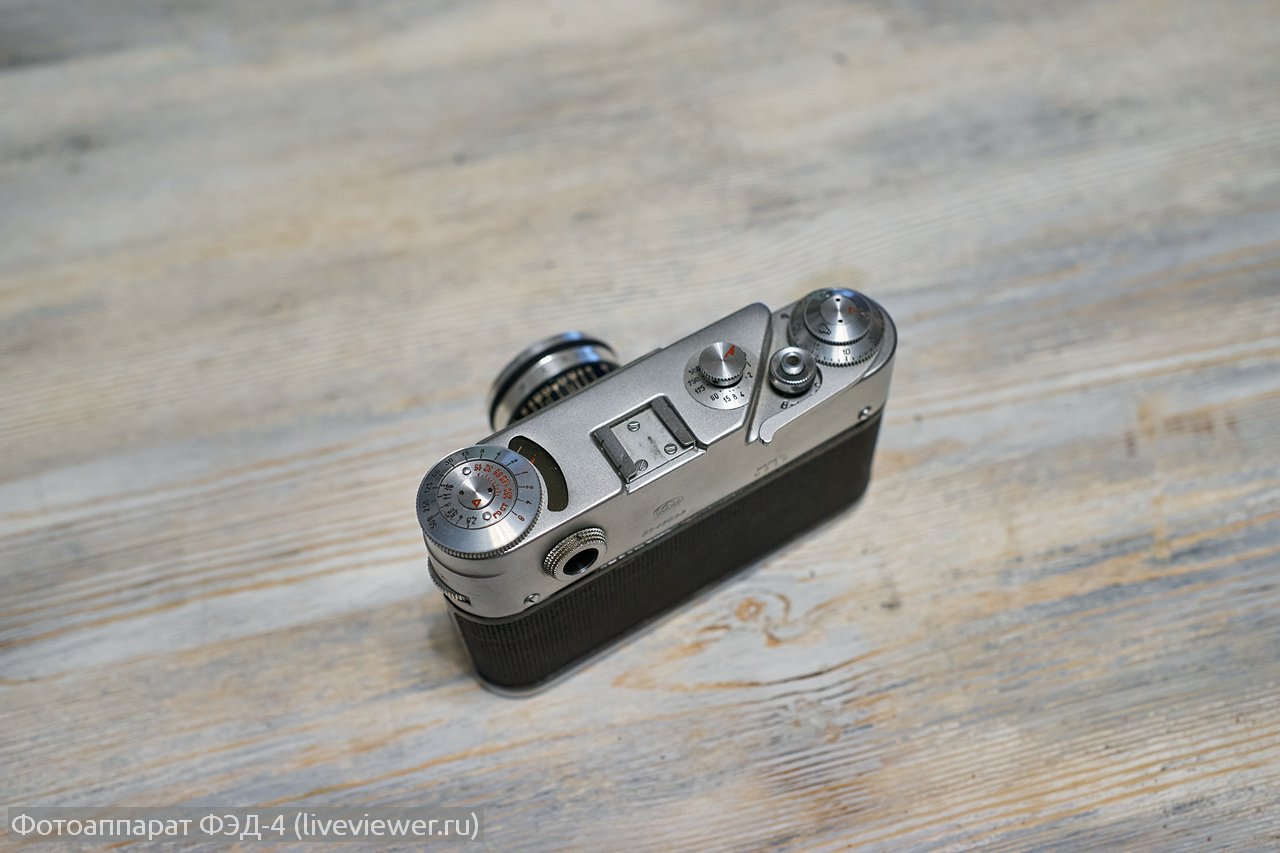 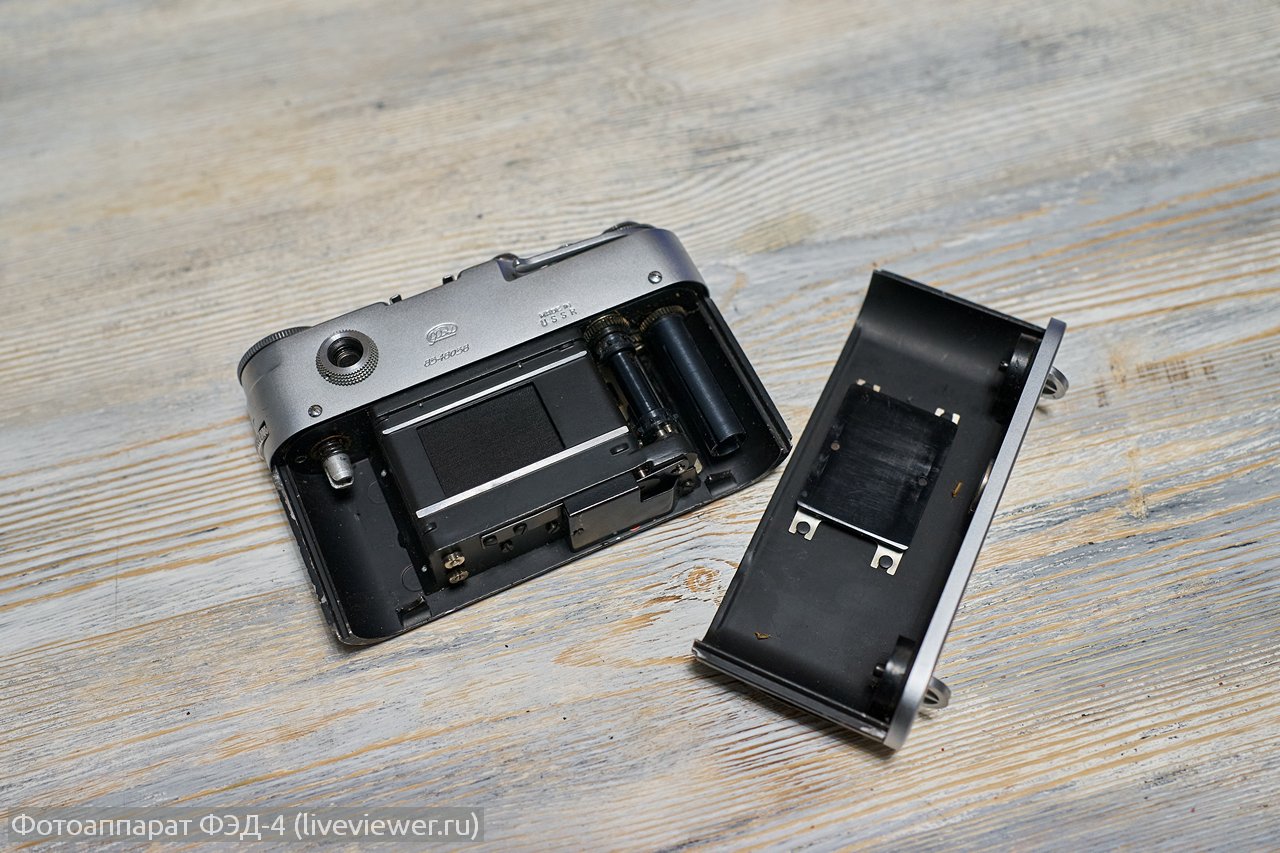 The classic flash sync speed is available at 1/30 second. Even the export ones did not have a central sync contact FED-4.

FED-4 is equipped with a selenium exposure meter. A galvanometric device that reacts to the level of illumination and is very inaccurate in its readings, since it is not located in the case and is illuminated from all sides. Lives separately from the camera and is not combined with the shutter speed dial. The photographer could rely on the readings of the galvanometer by adjusting the calculator's marks closer to the deviated arrow. The values ​​were selected based on the installed light-sensitive material. 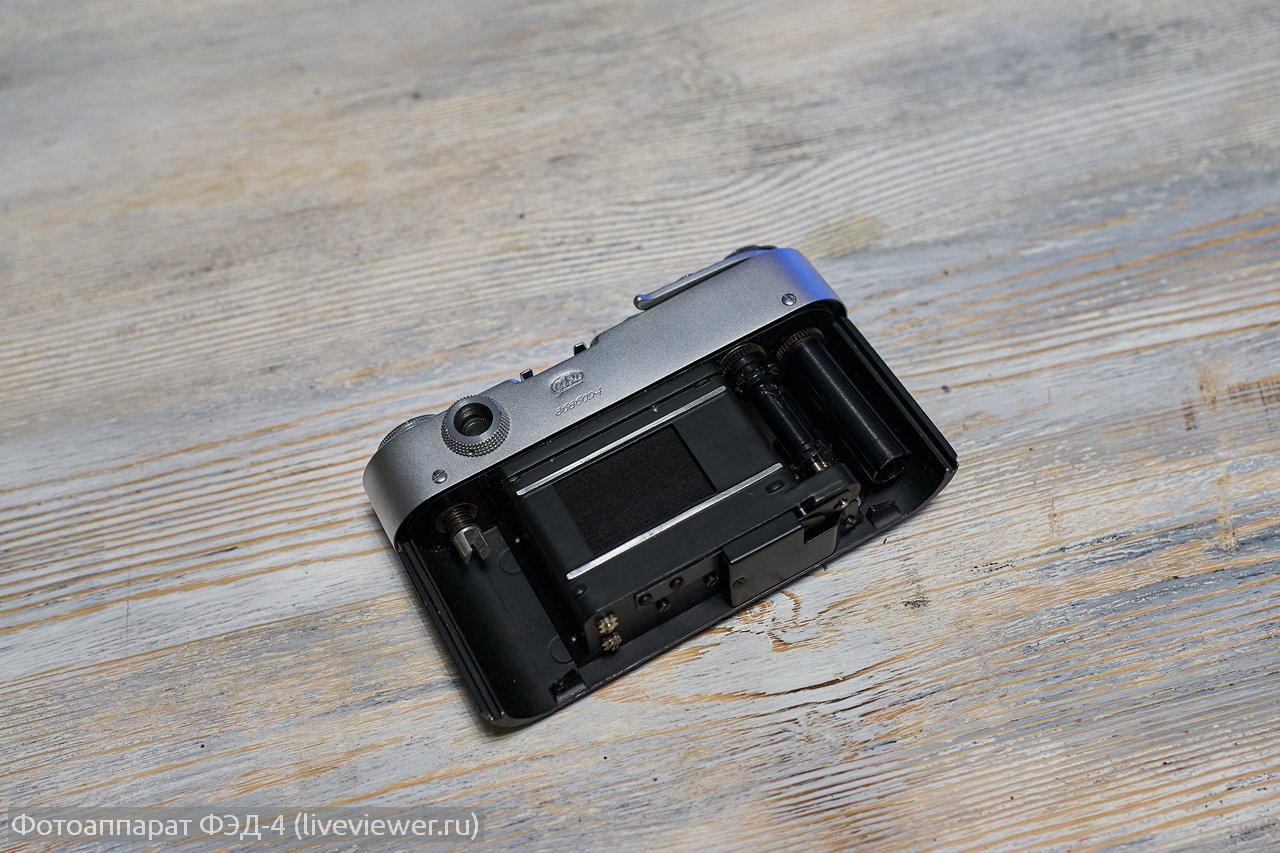 Convenience of work, as with a rangefinder film camera. There is nothing superfluous in the device, but some system limitations contribute to efficiency:

FED-4 looks scary. As scary as Big Tower computer cases. I think if engineers began to introduce a TTL exposure meter, the top cover would be increased in size more thoroughly. Why waste time on trifles.

FED-4 belongs to the class of cameras with the quietest shutters. Just "clack" and that's it. Soft release button, there is no perceptible vibration, there is no mirror that would vibrate and create additional noise. 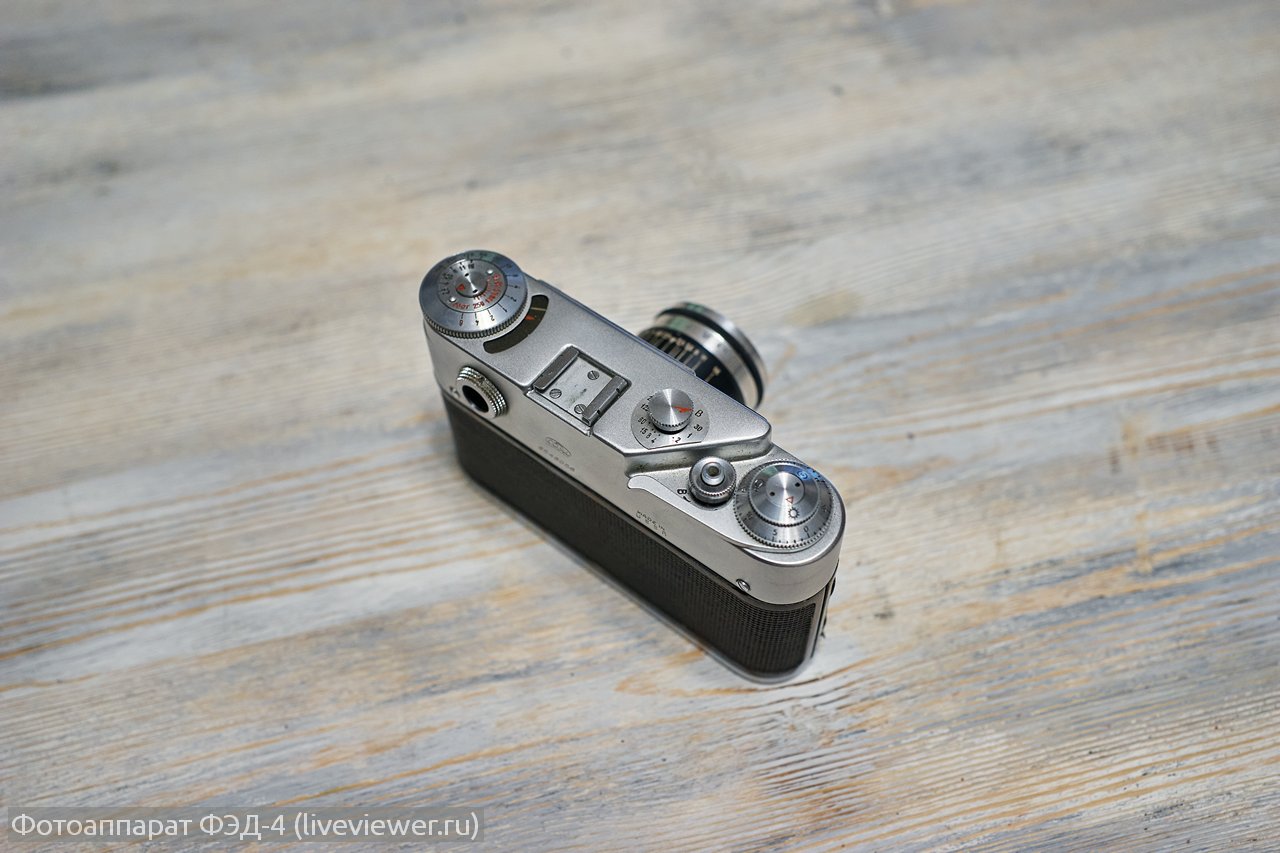 Get the film out of FED-4

It is not difficult to get the film out of FED-4. Turn the skirt at the base of the release button counterclockwise, then lift the rewind knob to the left and wind the film clockwise.