Kiev-6C and Kiev-6C TTL is a medium format Soviet camera manufactured by the Kiev plant "Arsenal".

This Soviet camera is modeled after the Pentacon Six and seems to have inherited some of its annoying flaws and reliability issues. For example, an unstable interval between frames and other operational details. Kyiv-6S is not the first medium-format device of the Arsenal plant, but the first and only one of its kind. A few years later, Kyiv-60 will be released. The Araks company in Ukraine was engaged in the repair of these cameras quite recently.

Unlike the "older" modular cameras such as Kiev-88, Salyut-S, and their "foreign counterparts", the Kiev-6S looks like a bloated small-format camera and the most simple control, like on those same "small-format cameras". The camera looks gigantic when you hold it in your hand. At the same time, it has a weight that does not allow long-term use of the camera without any support. Unlike Kiev-60, the shutter button on the camera is located on the left. 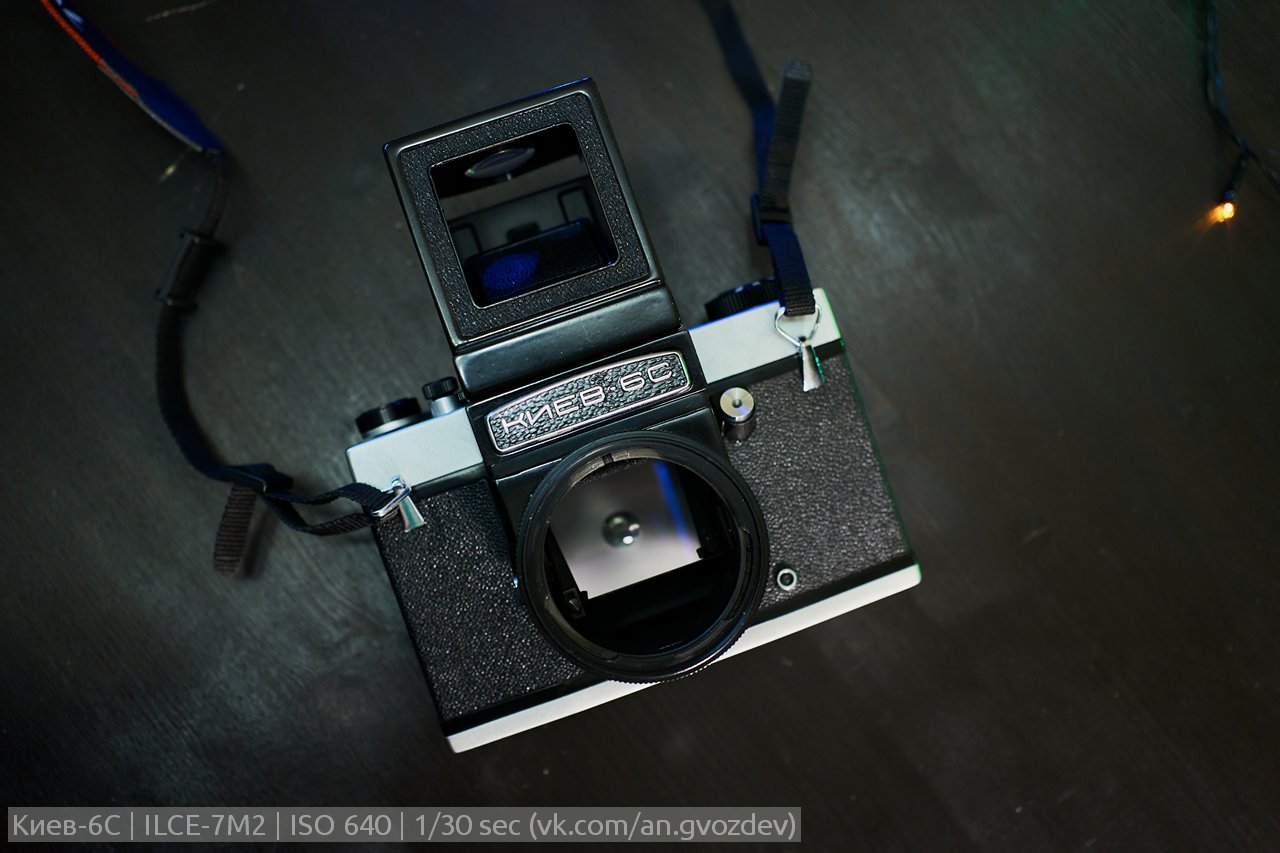 This decision was initially not very clear, since the vast majority of cameras of that time and now have shutter buttons on the right. Actually, Kiev-60 has a similar housing Kiev-6S, but in place on the left there is a cover for the shutter button. However, when you disassemble Kiev-6S, it becomes clear why the button was placed here, and not on the right. The button on the left is immediately linked to the shutter release mechanism. In general, where it was closer to the mechanism, they stuck it there. 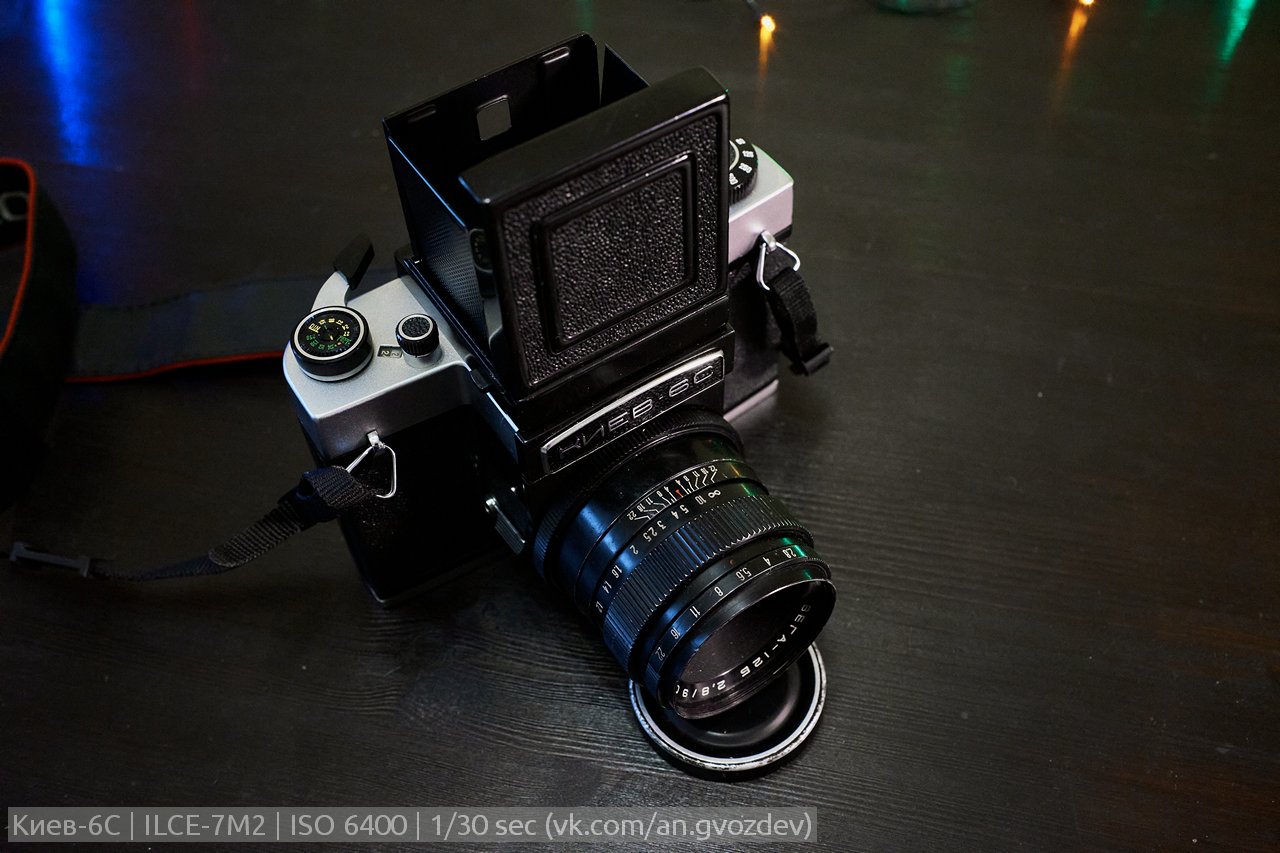 In working with Kiev-6S, this is probably the only moment that is annoying at first. But man is a creature that gets used to everything. The top panel has a shutter speed dial that contains values ​​from B to 1/1000 in stop increments. Shutter speeds slower than 1/30 are provided by a mechanical retarder built into the shutter mechanism. When switching shutter speeds, you can hear how the cocking of this mechanism works. On the right side of the camera there is a shutter cocking lever, a mechanism for switching between 12 and 24 frames, as well as a frame counter window.

Kyiv-6S can be found both with a pentaprism and with a replaceable viewfinder shaft. The viewfinder shaft is universal - it can work in the "mirror" mode, and is also equipped with a frame window for direct viewing and framing. When viewed in waist mode, the center of the matte screen can be zoomed in to help focusing. Also hidden in the viewfinder is an additional folding magnifying glass that magnifies the image. The pentaprism is equipped with two photodiodes and diode indicators of exposure correctness. 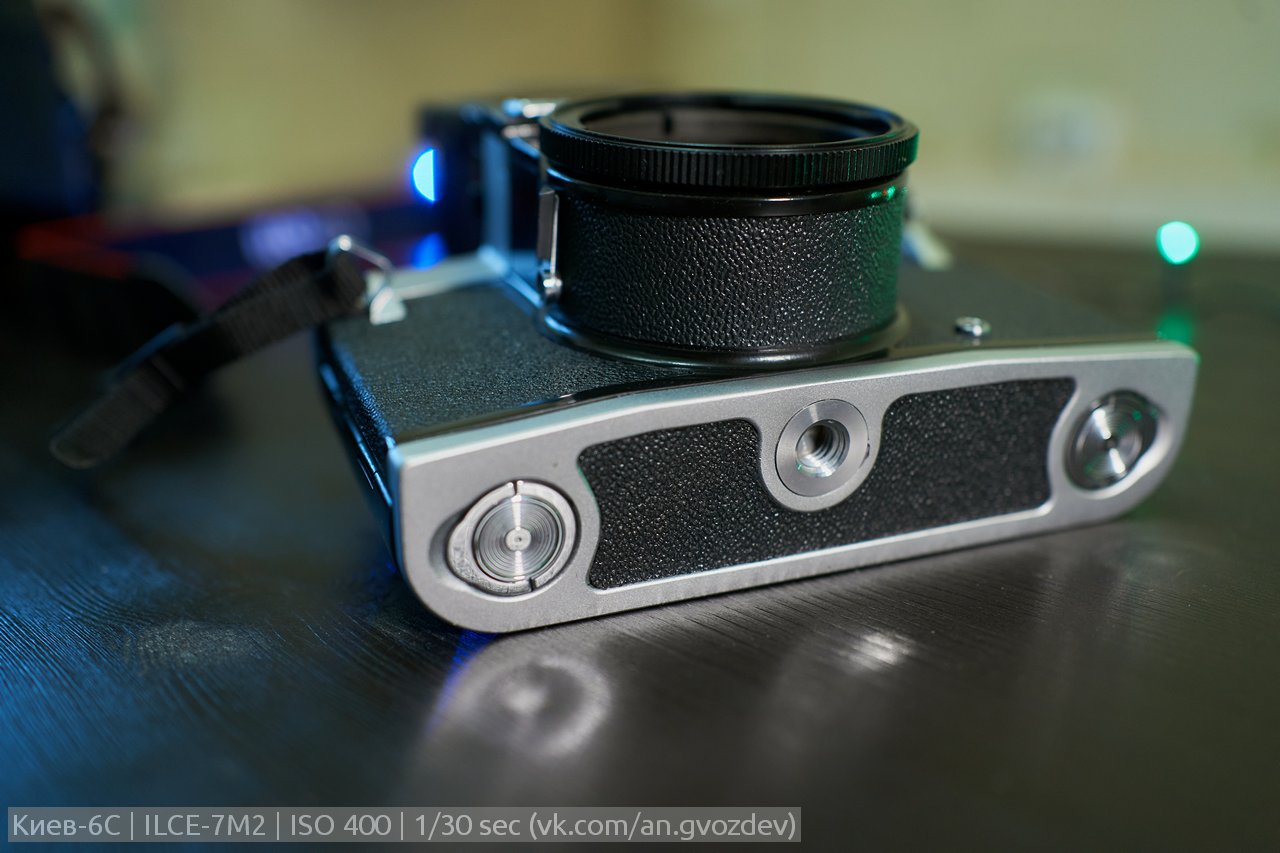 The current combination is set manually on the pentaprism cover, and the calculation device, based on the readings of the photodiodes, gives ok / not ok. The pentaprism is powered by a 3RTs-53 battery with an operating voltage of 3,75 volts. In the absence of such, you can dial a block of AG13 and other one and a half volts, or connect a power supply. True, there may be doubts about the correctness of the testimony. Do not worry about the fact that you have, for example, Kyiv-6S without a pentaprism. I felt uncomfortable working with her. You can use your smartphone as an external exposure meter. 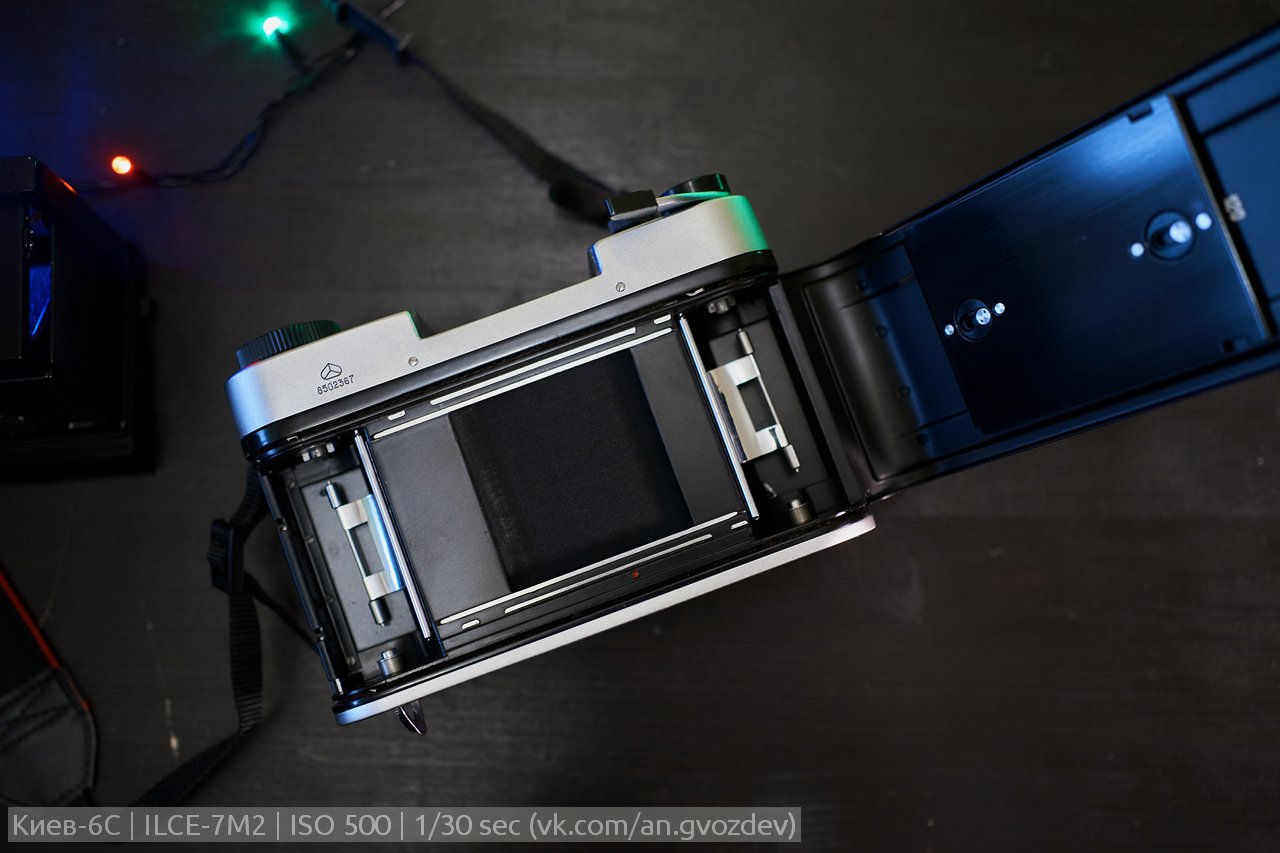 The cocking of the shutter is associated with the film advance, and a disk with a reminder of the photosensitivity of the material is installed on the cocking handle. In some Kiev-6S, you can find a hole in the back cover, covered with red glass. This is done in order to see the frame number on the film cord. The shutter curtains are fabric, you can often find a rubberized coating that has already degraded from time to time. At the same time, the fabric can be intact - a phenomenon is formed when the “curtains shine”. 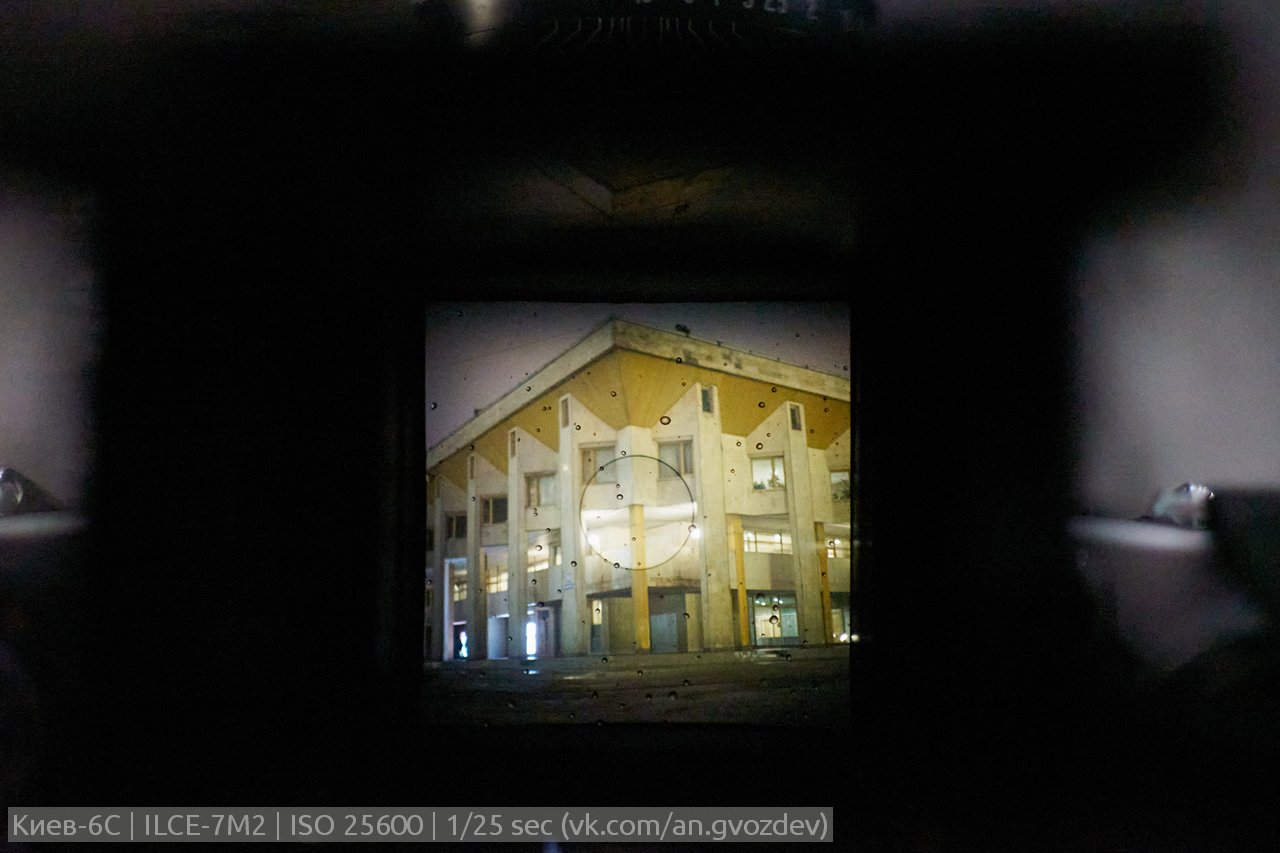 The shutter slams quite loudly and convincingly. The mechanics of the Kiev-6S are assembled under the top cover, installed on their own frame and are a separate component that lives separately from the body. The bottom cover of the housing is removed, from there you can access the adjustment of the curtain spring tension. Tightening is done without special tools. The mirror is lowered only in the cocked state, there is no direct sighting without a platoon. 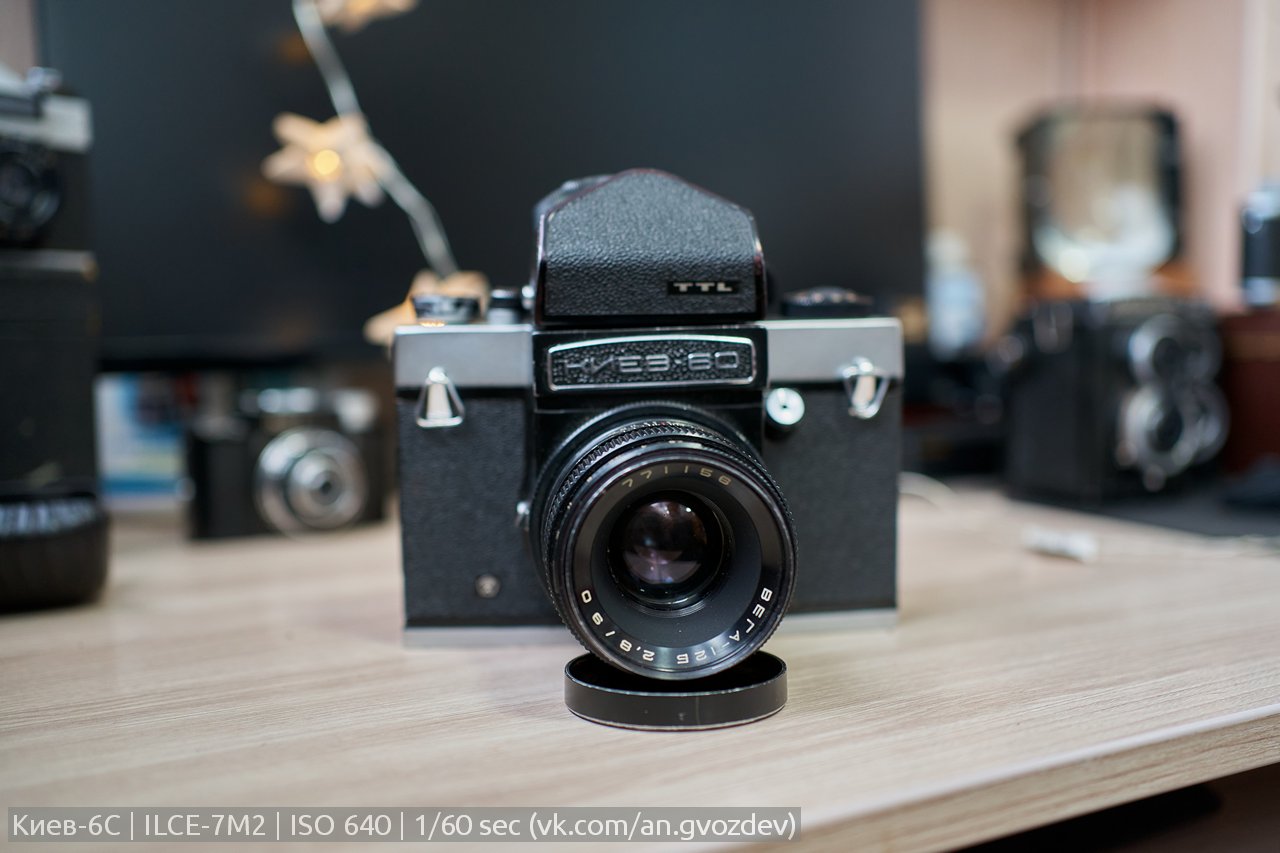 The mechanics in this device are very densely arranged and, despite the fact that they are completely made of metals of various compositions, they tend to fail even during normal operation, without any overloads. It’s just that the system of gears and springs itself does not allow the slightest deviations from the standard position, which cannot be avoided with repeated cocking of the shutter and increased load due to wear, clogging with dust or drying out of the lubrication of the mechanisms. The design gradually leads to the direction of rotation of the cocking lever, and when the bolt jams and tries to push harder, the gears and levers bend or break. You must be careful when working with Kiev-6S. 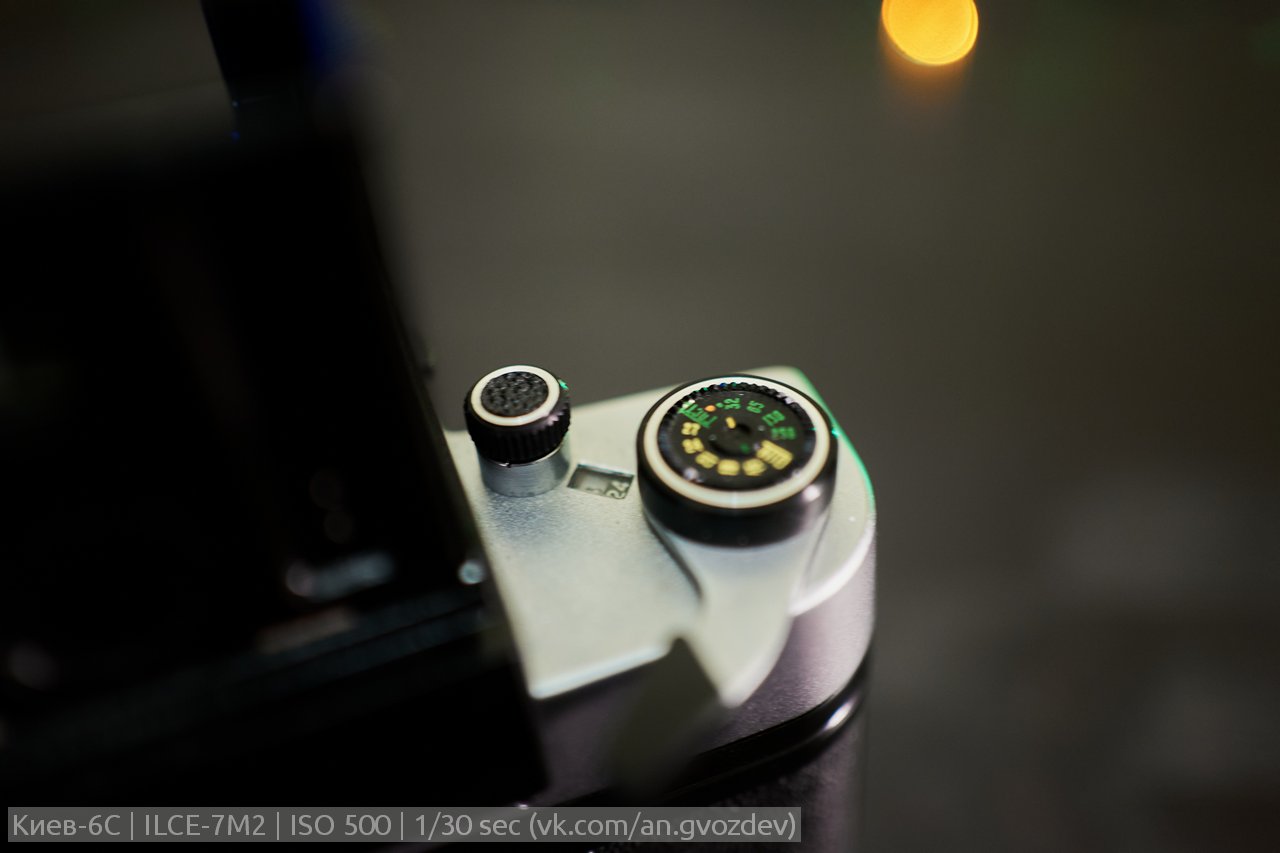 The most common disease of Kiev-6S is the under-cocking of the shutter. Appears over time when backlash is formed in the cocking mechanism, as well as when the springs are weakened. At the same time, with the flap folded back, the cocking lever stroke is enough to cock the shutter and fix the mirror, and in normal use, about 1 millimeter is already missing, since the lever rests against the smelting on the body. You can shoot for some time, of course, with pressure on the lever, then we compensate for the missing millimeter by temporarily shifting the axis of the trigger, but this is not recommended, since, in the end, the alignment of the mechanisms disappears and the device turns into a pile of scrap metal. 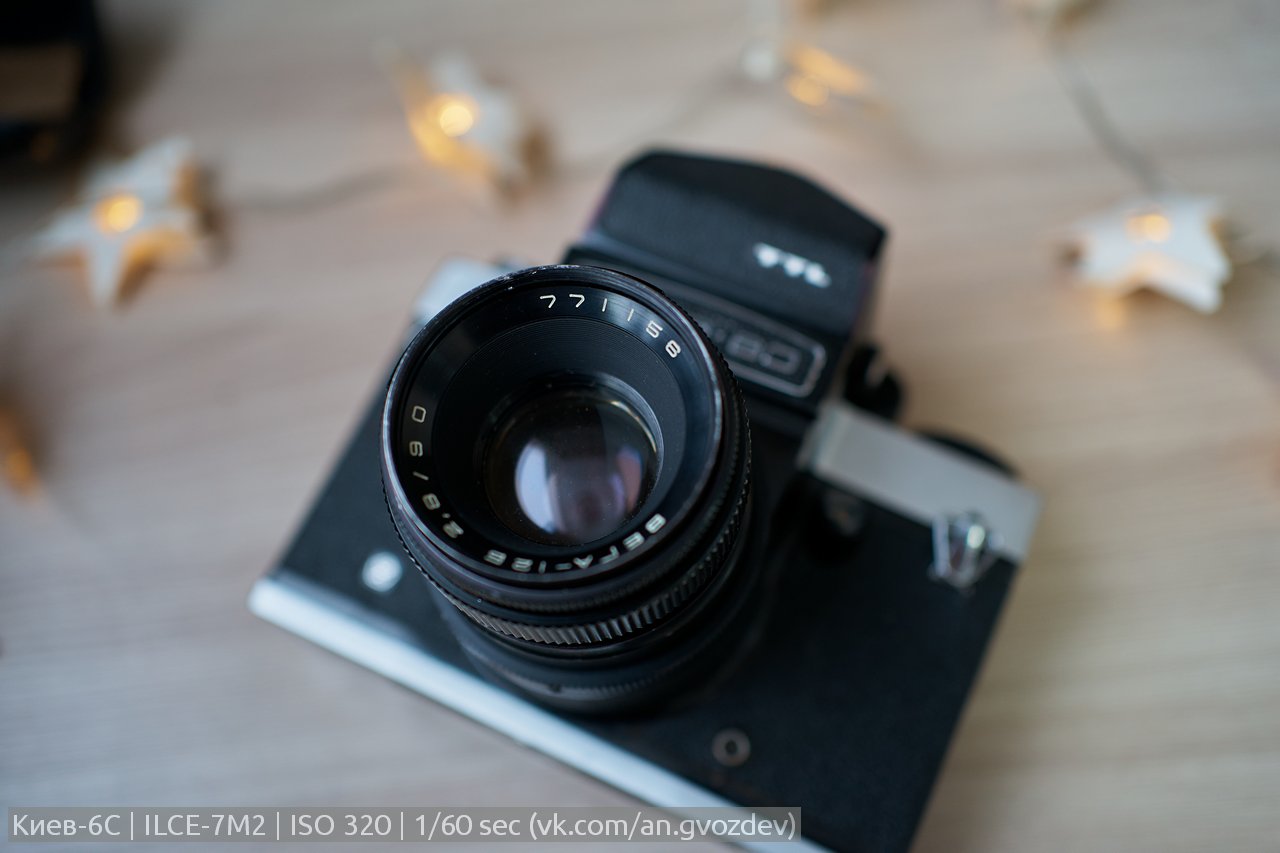 Standard lens - Vega-12B with diaphragm drive. B - bayonet Kiev-6S, Kiev-60 and Pentacon Six. Actually, optics from these cameras can be put on a digital camera through an appropriate adapter. In the article

How to do it is written.

The Kyiv-6S differs slightly from the regular Kyiv-60 in that it allows the user to shoot on either 120 film or 220 film (twice as much as 120 film without liner). In the absence of 120 film, you can use 35mm, the result looks very interesting. Such examples of photographs often come across on lomography sites.

In general, a review with photo examples assumes the presence of photos from the lens that was installed on the camera at the time of shooting. The camera itself is just a mechanical box, and it is necessary to look for examples of photos, for example, Vega-12B, which was a staff member at Kiev-6S. I do not have the opportunity to take examples of photos in medium format on Vega-12B, however, there is review of this very Vega-12B, but set to a small format figure.

Article dismantling Kiev-6S You can find photos and some descriptions. Suddenly someone will come in handy.