The Zorkiy-4 is the most advanced and reliable camera of all the Zorkis released earlier.

The first Zorki were produced at KMZ in 1947. They were copies of the FED camera, which itself was an almost identical copy of the Leica II. In subsequent years, both FED and KMZ produced 35mm rangefinder cameras, but as each new model was released, they looked less and less similar. FED/Zorkiy, made in 1948, have the FED and Zorkiy logos on the top plate.

At this time, both KMZ and FED produced essentially the same camera with very few differences. The original Zorki remained in production until 1956, being modernized along the way. 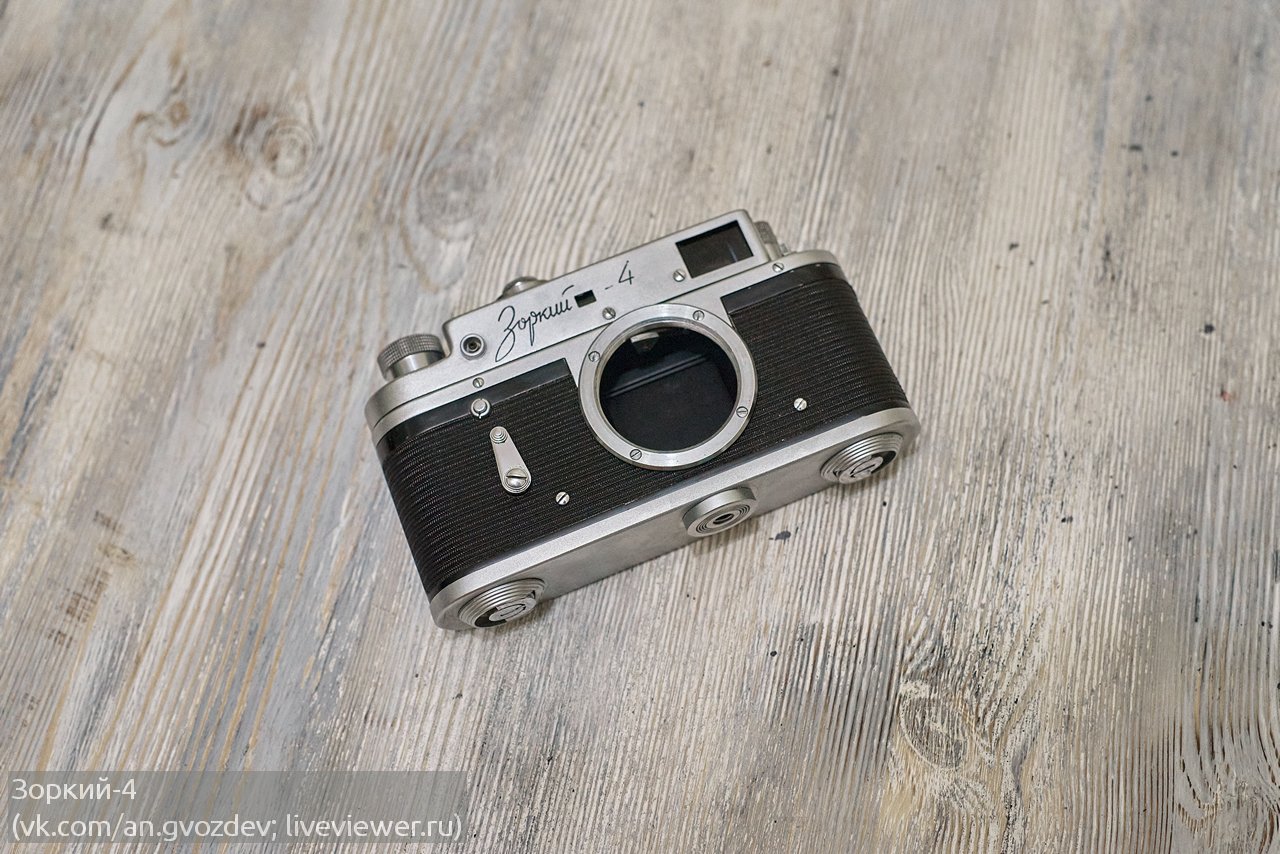 Zorkiy-4, on the other hand, is a Soviet camera from the Zorkiy family of a long line of rangefinder small-format devices. Produced by the Krasnogorsk Mechanical Plant (KMZ) in the city of Krasnogorsk, Moscow Region in 1956 - 1973. Camera upgrade "Zorky-3C". The main difference between the Zorkiy-4 model and the Zorkiy-ZS model is the presence of a self-timer. The most massive and technically advanced model among the Zorkiy cameras. A total of 1 pieces were produced.

Cameras with a built-in exposure meter were not produced, and unlike contemporaries produced by the FED, the camera has a bright viewfinder with a rectangular rangefinder spot in the center and diopter adjustment with a separate lever. Throughout the release, changes were made to the camera, more of a cosmetic nature.

The earlier versions are generally considered to be of better quality than those produced in the 1970s. So, for example, in the early 1960s, they switched to a more technologically advanced method of attaching metal ribs to the curtains, which made the shutter somewhat noisier, and simplified the shape of the top cover; from the second half of the 1960s, inscriptions began to be applied with paint rather than engraving, and they were quickly erased, especially on the dial of the shutter speed head; on the devices of the latest releases, there are no lugs for a neck strap, etc. 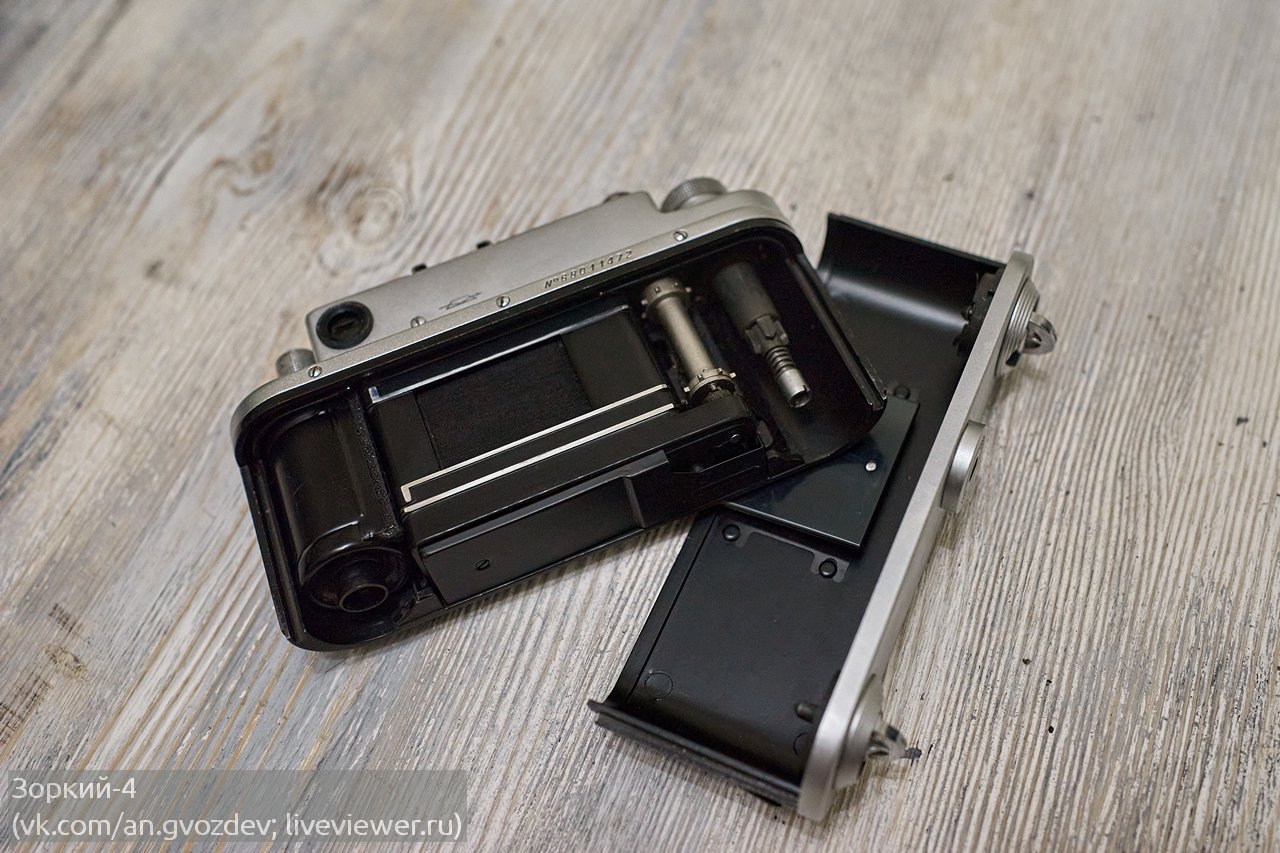 Like all previous models, the Zorkiy-4 will receive additional changes and updates throughout its production run, but there will be two important sub-models. The first was the Mir 1959-1961, which was not labeled Zorkiy at all, despite being nearly identical to the Zorkiy 4, except for a maximum shutter speed of 1/1000. It was sold as a cheaper alternative to the Zorkiy-4 and was hardly exported. The second was the 4 Zorkiy-1972K, which was basically an export version of the Zorkiy-4 with a film cocking lever instead of a barrel on the top panel.

According to the catalog "1200 cameras of the USSR" Zorkiy-4 has the following modifications:

There was even a model "Blind Vigilant" - Zorkiy-4 without a rangefinder and viewfinder. By the 1970s, rangefinder cameras fell out of favor with SLRs, and as a result, the Zorki line was discontinued in 1978. KMZ focused on Zenith SLR cameras.

Most Vigilant can be easily dated by looking at the first two digits of the serial number. The camera in the photo was made in 1968, it already had an outdated lens mount, a combined rangefinder with a viewfinder, but at the same time, focusing less than one meter for the lenses of these rangefinder cameras was not available. There was an extensive fleet of optics that allowed the installation of various lenses with a standardized working length without adjusting the rangefinder, and the standard lenses of the Industar and Jupiter series initially had good image quality, unlike most of what cameras with interchangeable lenses are now equipped with in the kit.

The main inconvenience when working with a rangefinder camera was the inability to see the image from the lens. The rangefinder and viewfinder were a separate system that gave only an informational idea of ​​focusing. The depth of field was also not visually possible to determine, so the scale of the depth of field of the lens was used. 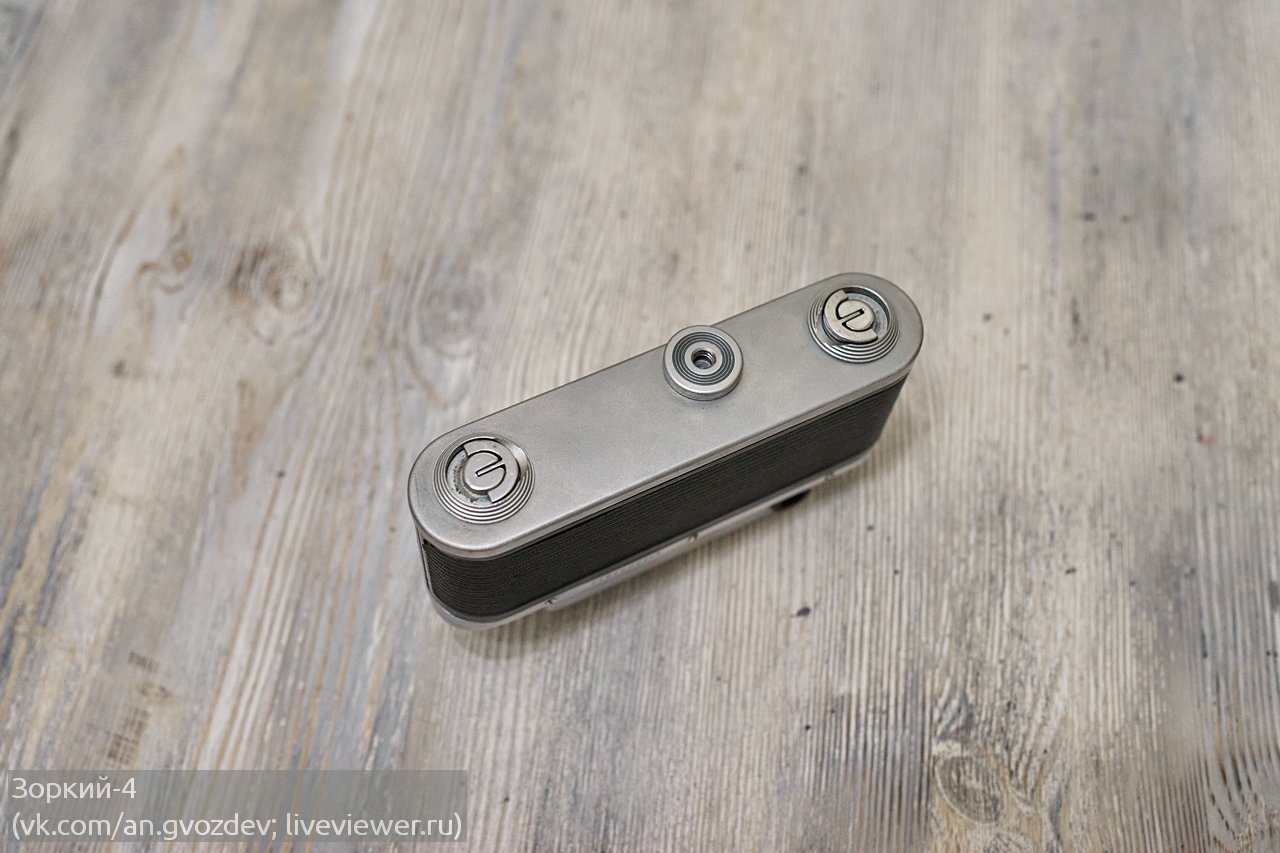 Due to large tolerances in manufacturing accuracy, a number of rangefinder lenses are encountered with inappropriate scale, depth of field values. So, for example, the lenses "Jupiter-3" and "Jupiter-8" have a flight beyond infinity, and infinity directly comes from 7 or 10 (20) meters on the scale. Although if you use rule 16 when shooting, then this drawback is leveled. All the same, the aperture is clamped almost to the maximum value, and shooting most scenes does not require sharpness in the horizon line.

All controls are concentrated on the top cover. Shutter speed dial, cocking and film advance drive, and film speed reminder. The shutter release button with the activation of the film winding mode back into the take-up spool is located between the shoe and the cocking device, and the shoe for accessories, which could mainly be used for flashes or various devices such as a revolving or single viewfinder, is located at the highest point of the top cover.

Manual aperture control, determination of the depth of field on a scale from the lens. There was no mechanization for aperture presetting. All manipulations were performed manually.

The viewfinder combined with the rangefinder is a breakthrough in convenience after the first Zorkoy model. At the same time, it was possible to crop and focus. The main thing is that the camera is in good working order, and the plane of the image from the lens coincides with the image displayed in the viewfinder and is projected onto the film correctly.

Looking into the viewfinder, its brightness surprises. The Zorkoy-4 has the largest and brightest viewfinder of all cameras in the USSR. Compared to the Kyiv 4, the Zorky's viewfinder is brighter and easier to use, and it's also not as easy to close it with your hand when you bring the camera up to your face. However, it is large enough to see the entire image, even with glasses, without having to press your face against the back of the camera. The viewfinder window has a slight blue tint, making it easy to see the rangefinder spot.

Zorkoy-4 does not have additional parallax correction frames. The only focal length available is 50mm. All other focal lengths require the use of an external viewfinder. 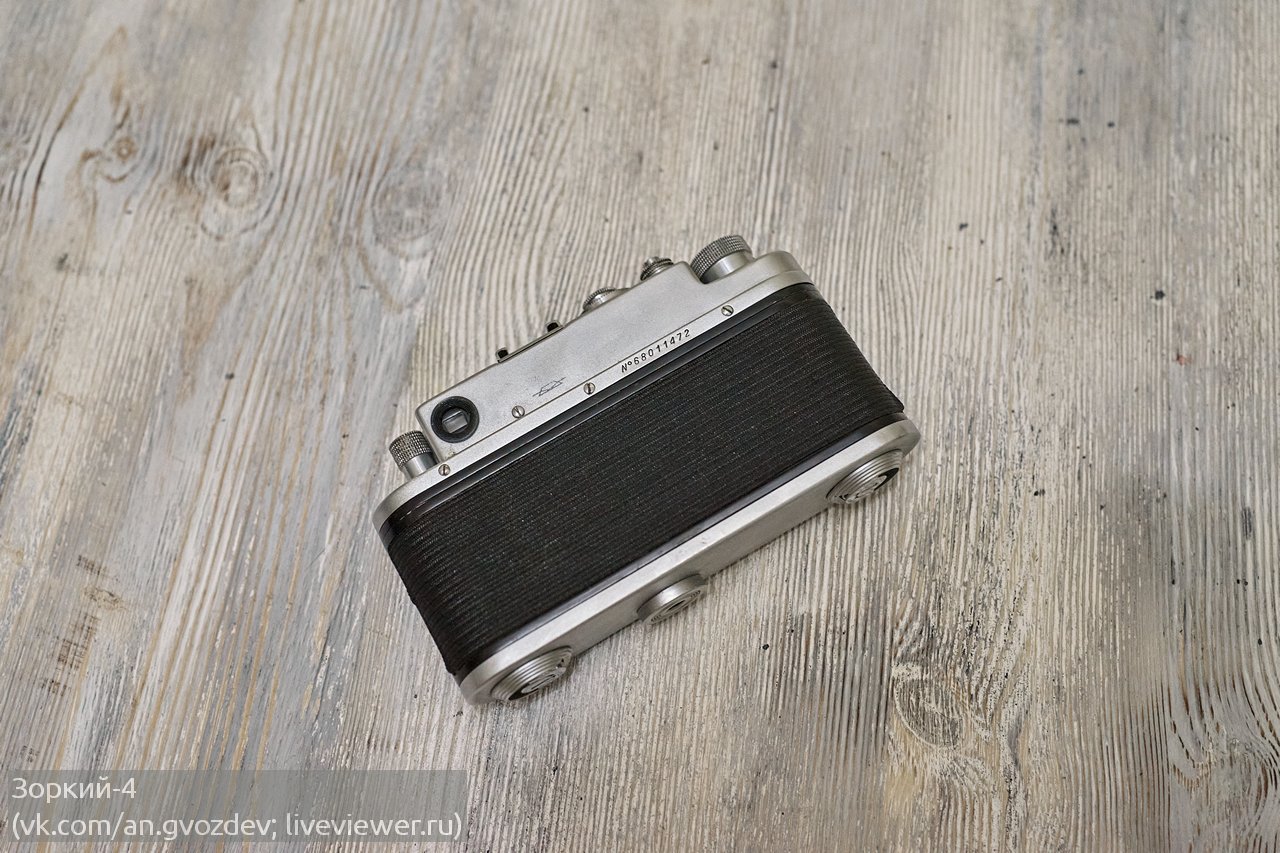 Flash sync speed is classic, available at 1/30 second. To connect flashes, a connector for connecting flashes via a coaxial wire is made.

The Zorkom has an interesting feature, namely an adjustable flash sync delay. Typical cameras of the era had a lever or switch that switched between M (flash) or X (electronic flash) timing. The reason this is necessary is because the old flashbulb didn't fire instantly. From the moment the electricity passes through the flash bulb, it takes a fraction of a second for the bulb to reach its maximum brightness. Electronic flashes (which are used in all modern cameras) reach maximum brightness almost instantly. So back in the 50s and 60s, the camera had to have a switch to adjust the delay depending on what type of flash was being used.

Zorki-4 is not equipped with a selenium exposure meter. The measurement was made with external exposure meters, or without them, using the rule / 16 when photographing.

There is nothing superfluous in the device, but some system limitations do not contribute to efficiency:

Zorki-4 belongs to the class of cameras with the quietest shutters. Just a "clack" and that's it. Soft shutter button, no noticeable vibration, no mirror that would vibrate and create additional noise.

Since the Zorkiy-4 and Zorkiy-4K cameras differ only in the presence / absence of a trigger platoon, we can say that they work the same way. Younger shutters are slightly louder due to the modified shutter fastening. 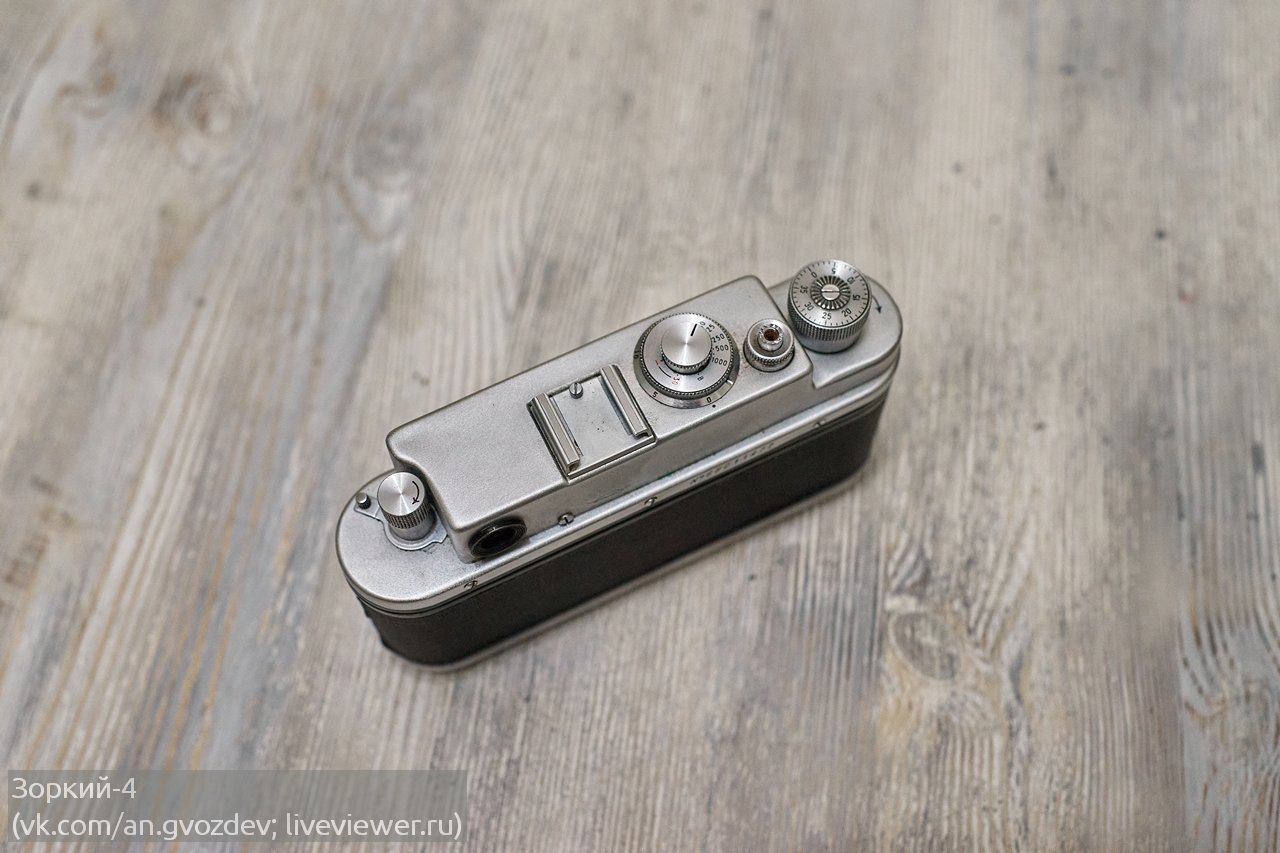 The reliability of the Zorkiy-4 mechanics is slightly lower than that of cameras with a fixed shutter cocking head. If only because it is possible to break the shutter or cocking mechanism by incorrect actions. Otherwise, the troubles are like cameras with curtain shutters. The shutters were used typical for the Zorkiy, Zenit, FED models of various versions, with accompanying problems in the form of:

However, in maintenance, the shutters of the "Vigilant" and "Feds" are easier, as they are removed from the body entirely and do not have synchronization with the mirror.

Rewinding of the film is carried out using the head. The frame counter is manual, there is no reset. The film is loaded under the rear removable cover.

Loading film into the Zorki is fairly easy if you have a take-up spool. As with most rangefinder cameras made in the USSR, the pick-up coil can be removed from the camera and lost. If you want to buy a Zorkiy 4 (or any camera from the Soviet Union), make sure the pickup coil is included.

How to wind film on a Zorki-4 camera

Under the shutter button on the top panel of the Zorkiy 4, there are two symbols:

Today, rangefinder cameras "Zorkiy" are popular with a variety of collectors. Zorkiy-4 will look great on the shelf, and in case of use, it performs the same functions as Lake, only it costs less. In addition, these are quite repairable cameras. The mechanics in them are eternal, and the shutter can be changed on the knee.

In general, you need to look for examples of photographs not from a specific camera, but from the lens of interest. The camera is just a box that blocks the light from the film. Zorkiy 4 and Fujicolor c200 (Mikhail Grishin) sample photo: