Sony A7 Review | examples of photos and videos

The Sony A7 is a Sony E mount full frame mirrorless camera launched in 2013 by Sony.

I got it in 2021 in a crippled and worn-out state - the case was split in the lower part and the screen did not work, due to the absence of a loop. For a necro-review, that's it. The body is glossy, shiny. The shabby camera looks like a cheap gadget, especially compared to the rest of the seven versions.

From the point of view of 2013, the camera is quite productive, and was created with a clear backlog for the distant future. A large matrix that perfectly reproduces shades of colors and details in the shadows, the correct white balance is almost always, fast and tenacious autofocus with native optics. The ergonomics of the camera are reminiscent of previous Sony models, and are reminiscent of the NEX with the addition of buttons. It was a discovery for me that the viewfinder completely duplicates the monitor, and quickly switches from the monitor, without brakes. 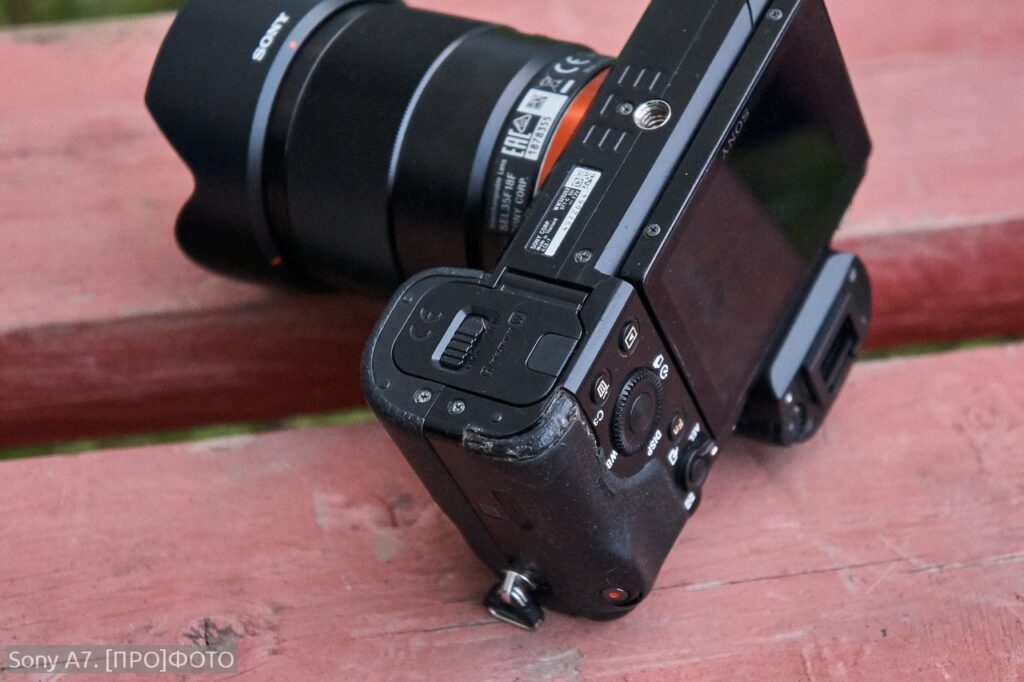 All functions are also duplicated, including magnification and focus-picking, which makes the camera indispensable when working with manual optics. Before that, on DSLRs, I had to use LiveView with a 10x magnification of the picture, which greatly slowed down the work. The shutter button is located on the body, which is unusual at first. 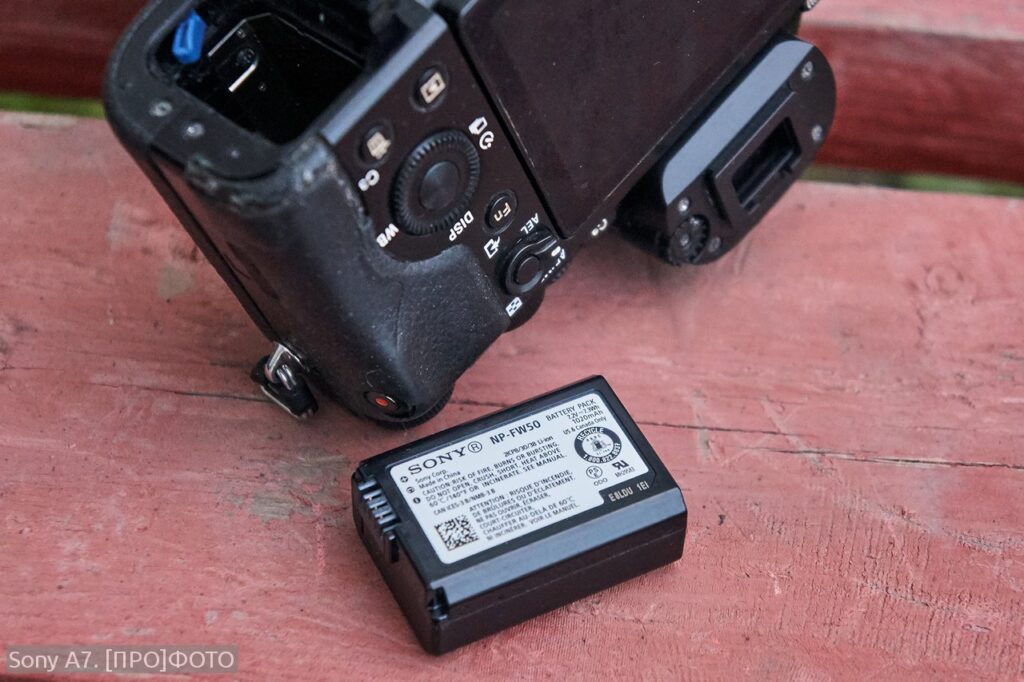 But in general, after a while, you realize that you can work like that. In the second version, the manufacturer, of course, corrected this misunderstanding and changed the location of the button, making the already interesting device even more convenient. The camera allows you to reassign the control wheel buttons, as well as assign additional. functions. Almost everything is available for remapping in the camera settings. The ISO sensitivity range is 50-25600. 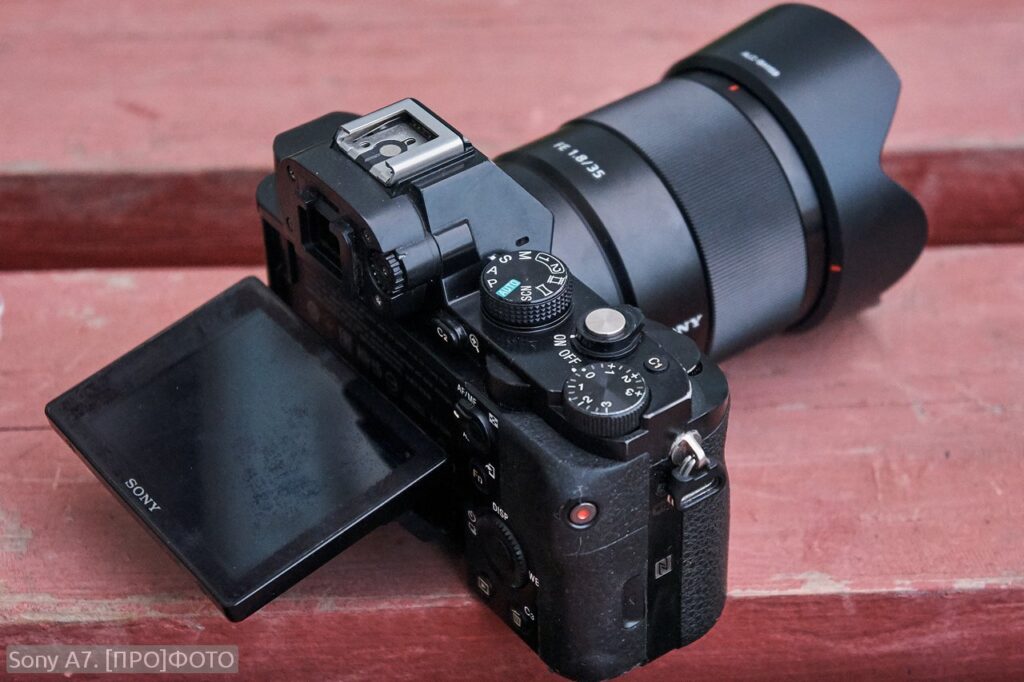 Manual adjustment allows 1-stop adjustments, while auto-ISO is adjustable from 3 to 100 in 25600-stop increments. The display flips out and allows you to shoot from the ground or on outstretched arms, but will not allow you to shoot yourself. Moves only in a vertical plane. The camera can be charged via the USB port, which is very convenient. However, the camera cannot shoot while charging. The batteries use the standard alpha system form factor, NP-FW1. 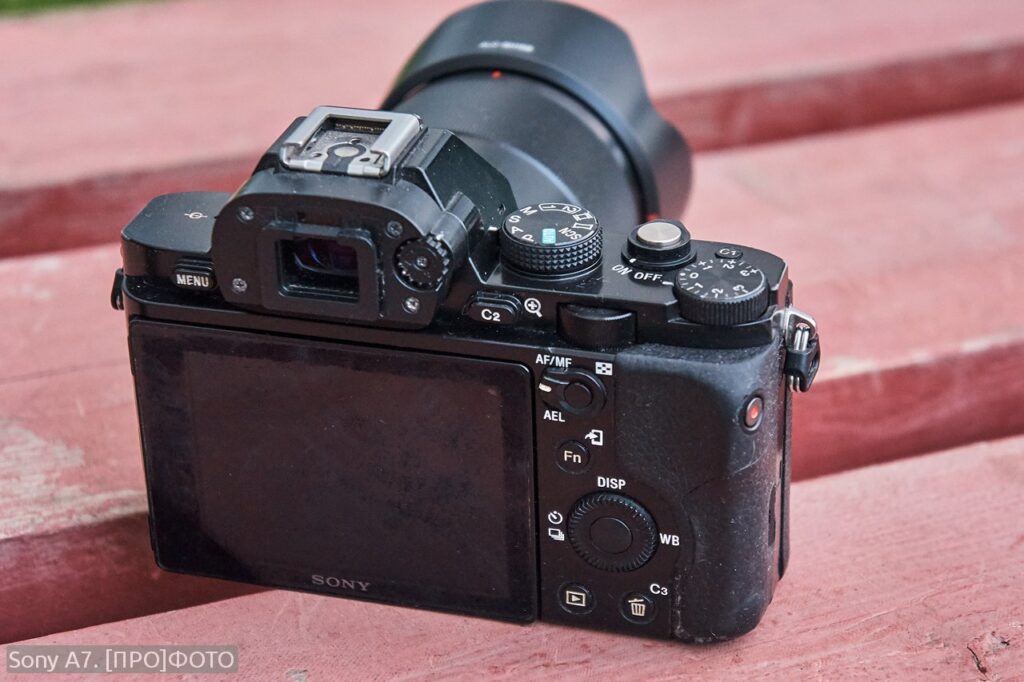 Not very capacious, but very common and inexpensive. The autonomy of work from the native battery is much higher than the declared 340 frames according to CIPA, I was surprised by this, since Canon basically, if it jumped the declared values, it was only when shooting in a series with the display off. 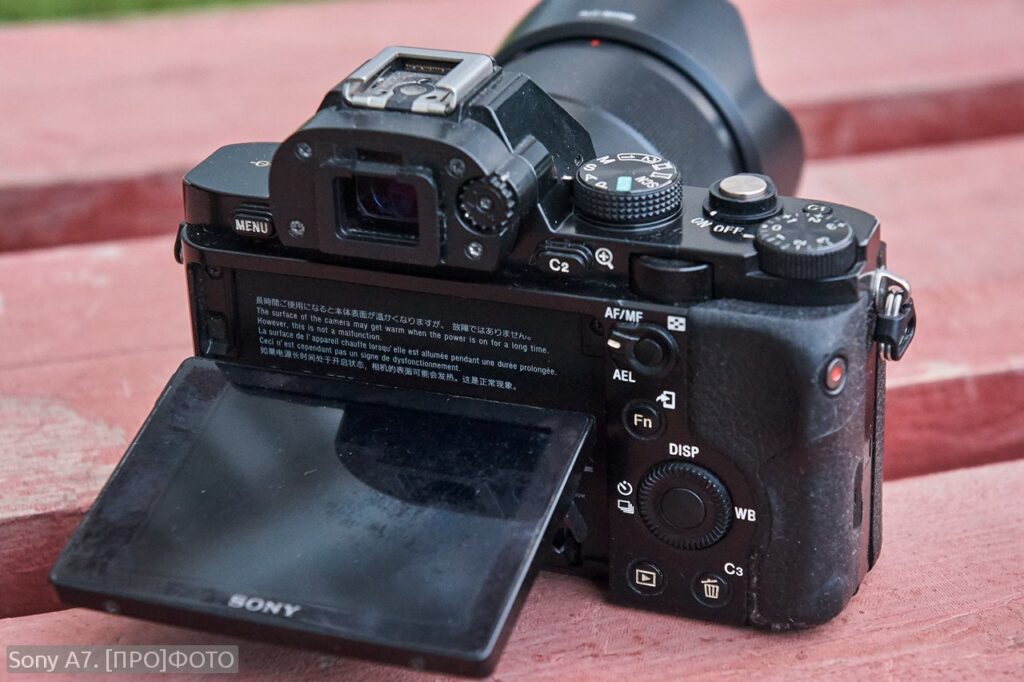 Longest burst on a single battery - 865 shots. Video, on the other hand, eats power thoroughly, and comparing 2 cameras in operation - Sony a7 and Sony a7 mark II, a difference of 20% was found (shooting 40 minutes of video with manual optics leaves 54 percent of the charge versus 74). But autonomy when photographing is more important to me, since I do not shoot video. The camera lacks matrix stabilization, it was equipped with the next generation. 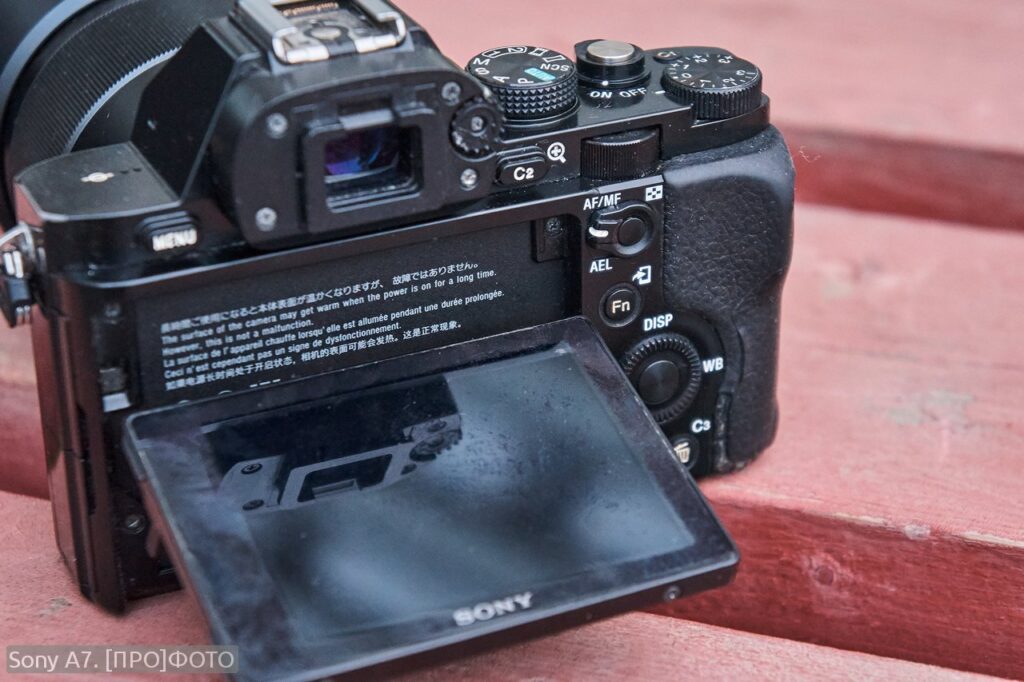 When shooting video handheld, it is necessary to use a lens with a stabilizer, or a steadicam, as micro-shaking is noticeable. The camera supports automatic switching to APS-C shooting mode for using lenses from cropped models, but you can disable the function when shooting with artistic vignetting). By the way, comparing the standard lenses 28-70 3.5-5.6 OSS for a full frame, and 18-55 OSS from a nex, I came to the conclusion that the latter has the best stabilization. But it doesn't work on this camera. 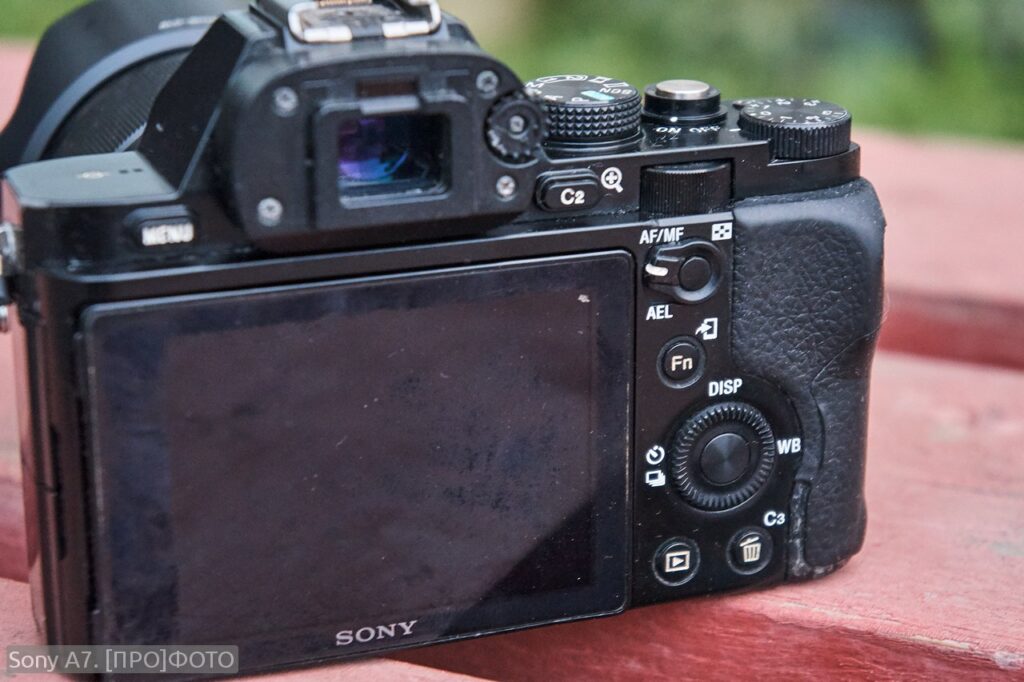 Generally, the 18-55 OSS is a lens that gives a wider image angle on the sensor and focuses closer. In the end, I got rid of 28-70. 24mm at the near end with the minimum focusing distance seemed to me more convenient to work. And the depth of field is higher. 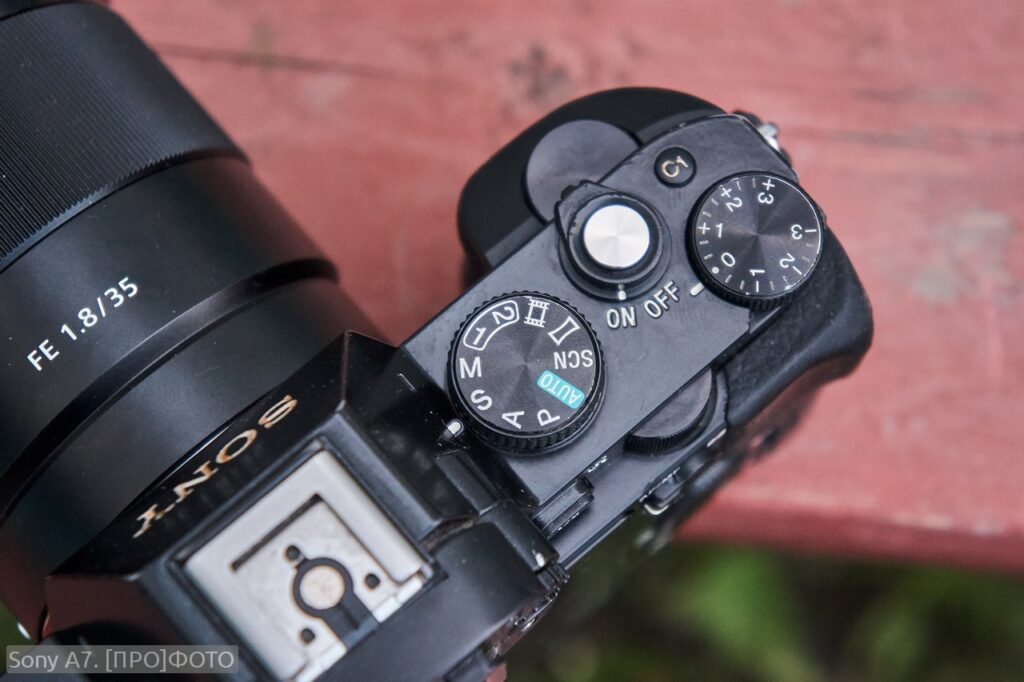 High speed burst shooting allows you to shoot at crazy speed and the RAW buffer clogs up very quickly. 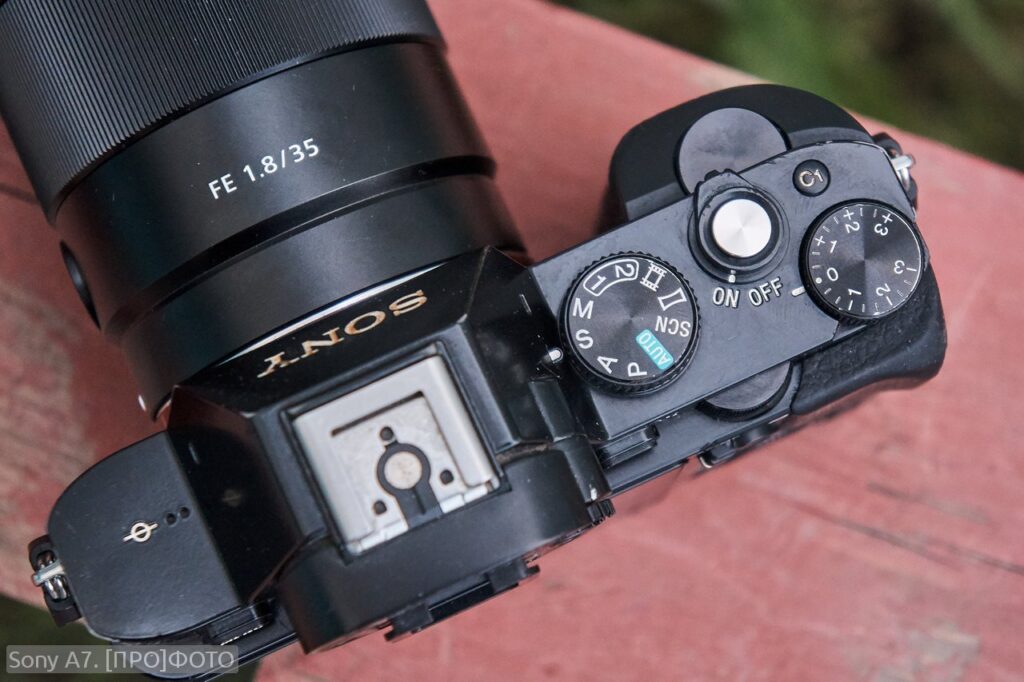 The flash drive can be changed without turning off the camera, she takes it calmly. In canon, a power off is triggered when you open the memory card compartment. The focusing speed does not keep pace with the shutter release, the camera is not suitable for capturing dynamics. As well as in low light conditions, it is better to select a subject in focus brighter. Autofocus likes to turn down, by the way, and focus not where you need it. 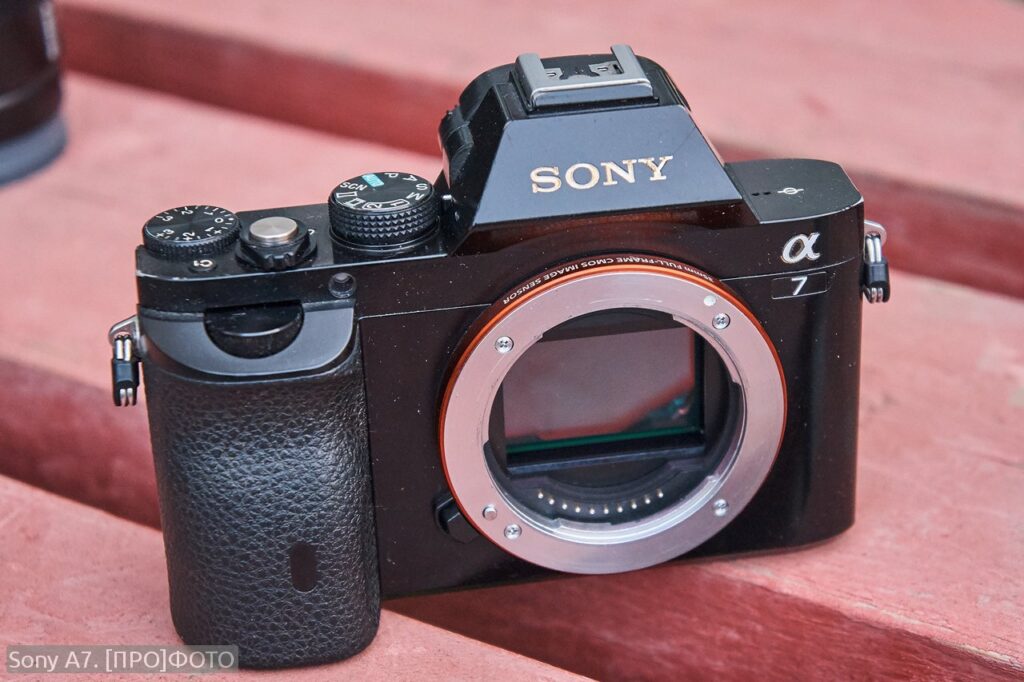 It is treated only by specifically specifying a contrasting object in the area that needs to be displayed sharply. When using lenses for Sony cropped cameras in AF modes other than Manual AF, after focusing the AF will constantly jerk. It is necessary to control this and focus manually at some points. On the NEX-5 we saw the same thing, it seems to be some kind of software glitch wandering from model to model.

The ISO of the camera is a separate song. Working up to 4000. You can look at the samples and draw your own conclusions.

Shutter operation Sony a7, loud, quiet and silent mode is not. But his sound is more pleasant than from a screeching nex or the second seven. The safety margin is very high - I have met cameras with mileage and 700 thousand triggers on the network. This is a chamber that can be watered endlessly. At first, it’s unusual that the camera has an “electronic front curtain” function and at slow shutter speeds you might think that the camera just freezes.

The camera can be controlled remotely, but when connected to a PC via a wire, Capture One was unable to enable LiveView. Wireless capabilities are represented by the presence of Wi-Fi and NFC. In 2013, Canon's Wi-Fi was implemented with a crutch as a separate module. However, this difference was quickly leveled. When connected via Wi-Fi, the camera can be updated and the necessary applications can be installed directly from the Sony store. By the way, by default, remote control did not work for me, I had to register and update the built-in remote shooting application. Sony has updated the software for its desktop and smartphones, but hasn't bothered to warn users to update the software in the camera as well. From this, many have burned out (see reviews on Imaging Edge Mobile).

In general, the camera only pleased. It's inexpensive, yet it has all the features you need. Zebra and Peaking work out of the box, which is useful for both video and manual focus photography. High dynamic range, and ISO 4000 is quite working for 2013. The menu is cluttered, of course, but you can customize everything you need from it. A truly versatile camera, in which there is no need to finish something, as is the case with Canon. Even from the height of 2021, it still remains an indispensable assistant in work. Has a continuation in the form A7II, as well as variations like A7R and A7S.

Sample photos of Sony A7