FED 3.5 / 50 (Industar-10) is a kit lens for FED cameras of the first versions. Excellent sharpness, miniature dimensions when folded. Replica of the pre-war Leitz Elmar 3.5 / 50 lens. 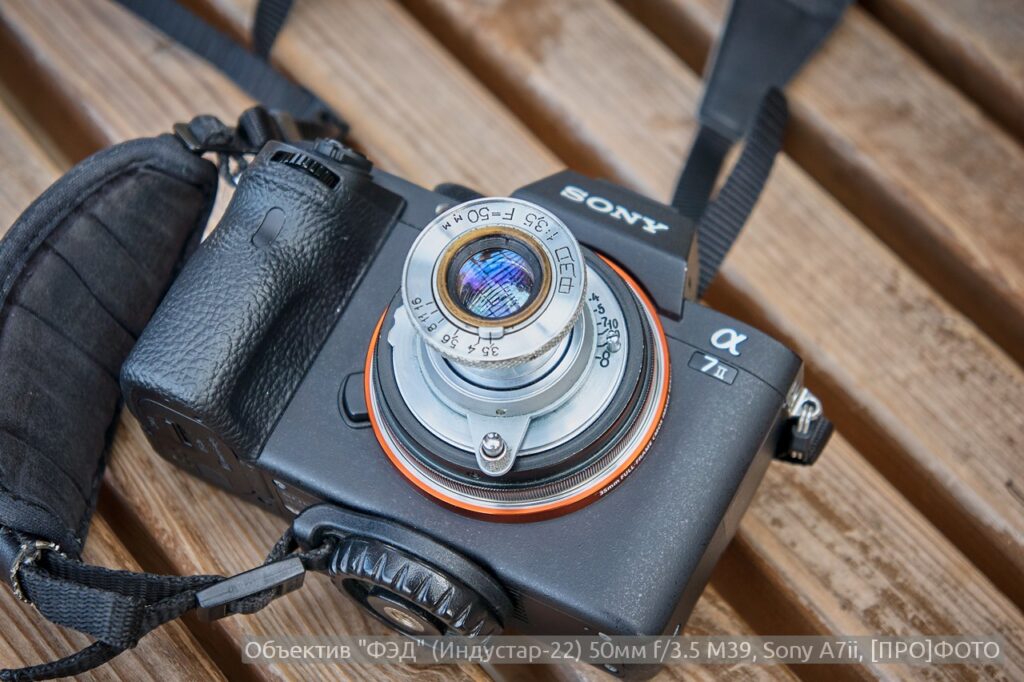 FED 3.5 / 50 is a Leitz Elmar, converted in the USSR and produced in huge quantities, both before and after World War II. The folding design was not chosen by the authors by chance - with the help of this lens, already compact cameras become even more compact. In order to start using the lens, you must pull it away from you and turn it clockwise to fix it. That's it, the lens is ready. 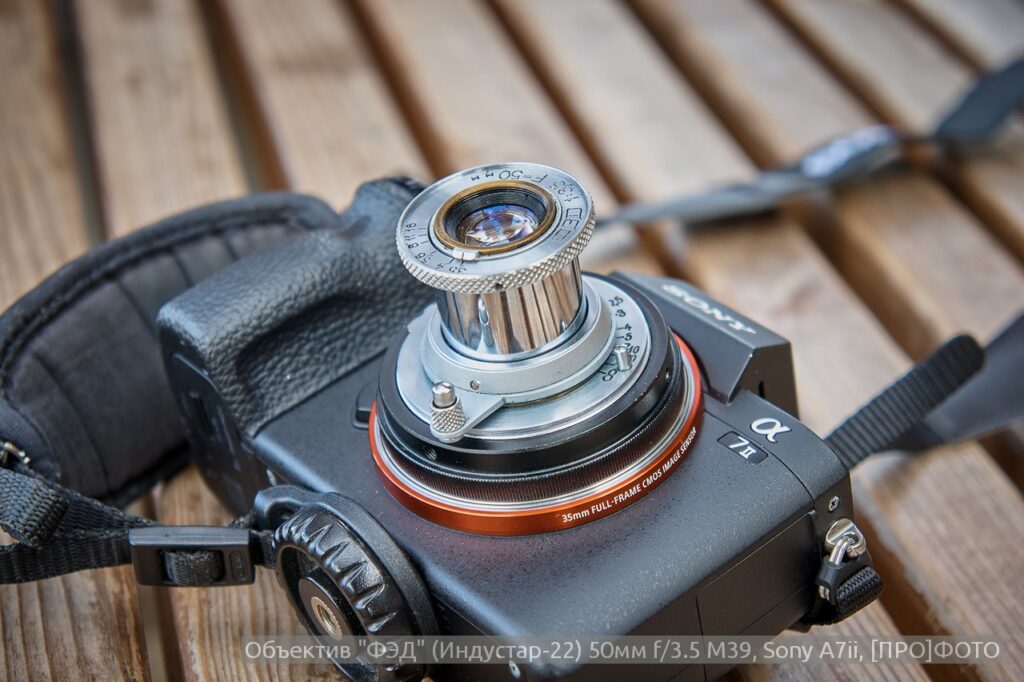 But this is where its danger lies - with the rear end of the tube on a SLR camera, the lens will rest against the mirror, and on a mirrorless camera, it is quite capable of piercing the matrix. Well, for example, in Sony NEX, the tube rests against the frame window, and a good part of the lens remains sticking out. 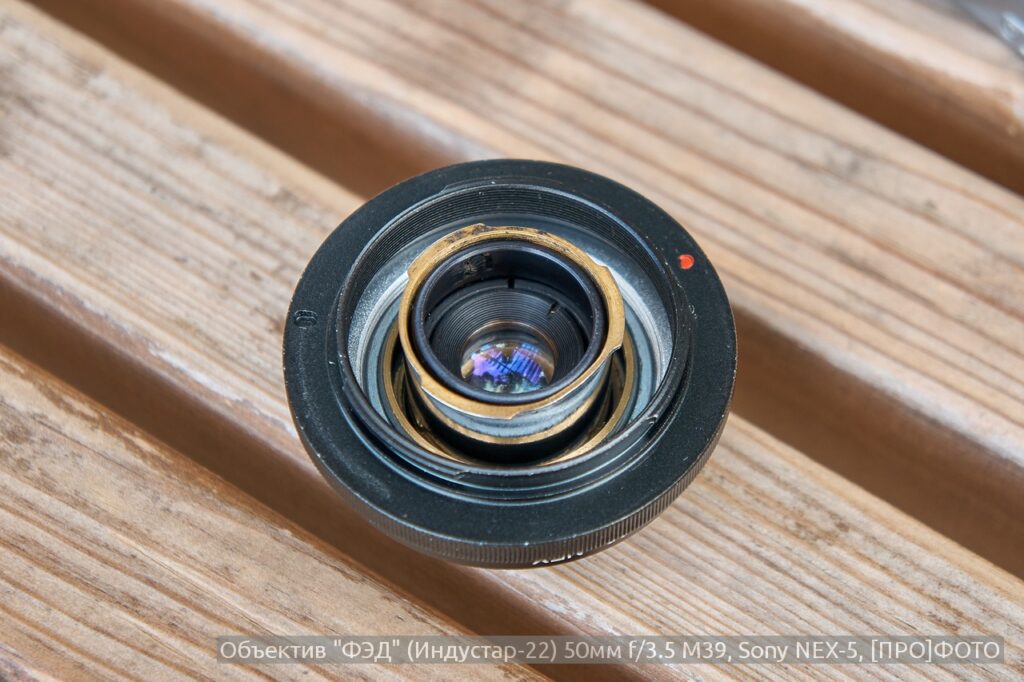 On Sony A7 and A7II, the lens retracts completely, about a millimeter does not reach the camera matrix, but crosses the shutter plane. The consequences are clear. The installation was carried out using an adapter M39 (LSM) - Sony NEX. 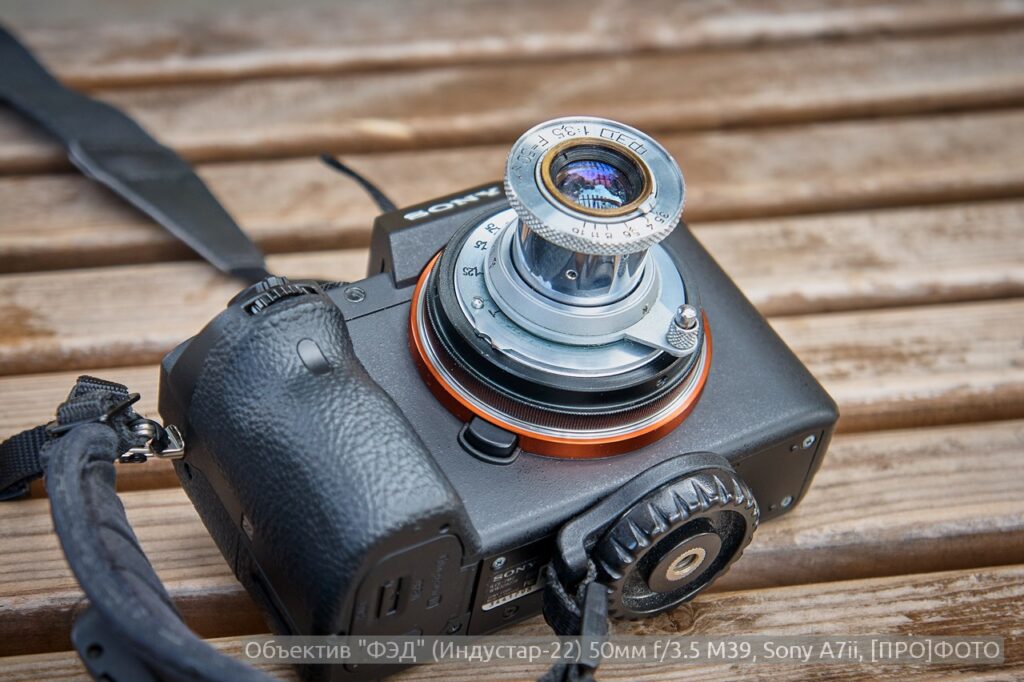 Mounted on a modern camera, this lens looks funny to say the least. A kind of fungus sticking out of the camera. Aperture control is not the most convenient. In order to switch values, you need to be distracted by working with the aperture ring. FED 3.5 / 50 (Industar-10) is considered a dark lens. However, its sharpness, thanks to the scheme of the German progenitor of the "Tessar" type, can compete with contemporaries. In addition, the lens is devoid of most of the distortions by a well-chosen combination and shape of lenses. 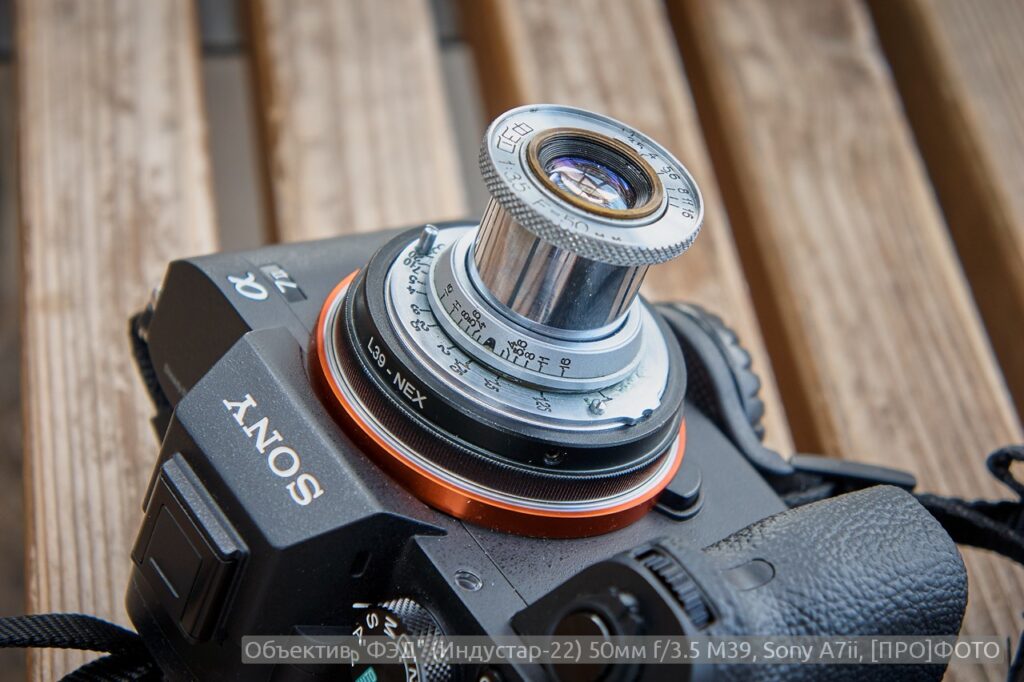 The tube itself is chrome-plated and assembled from brass. The base and frame of the front lens is also brass, electrochemically painted. 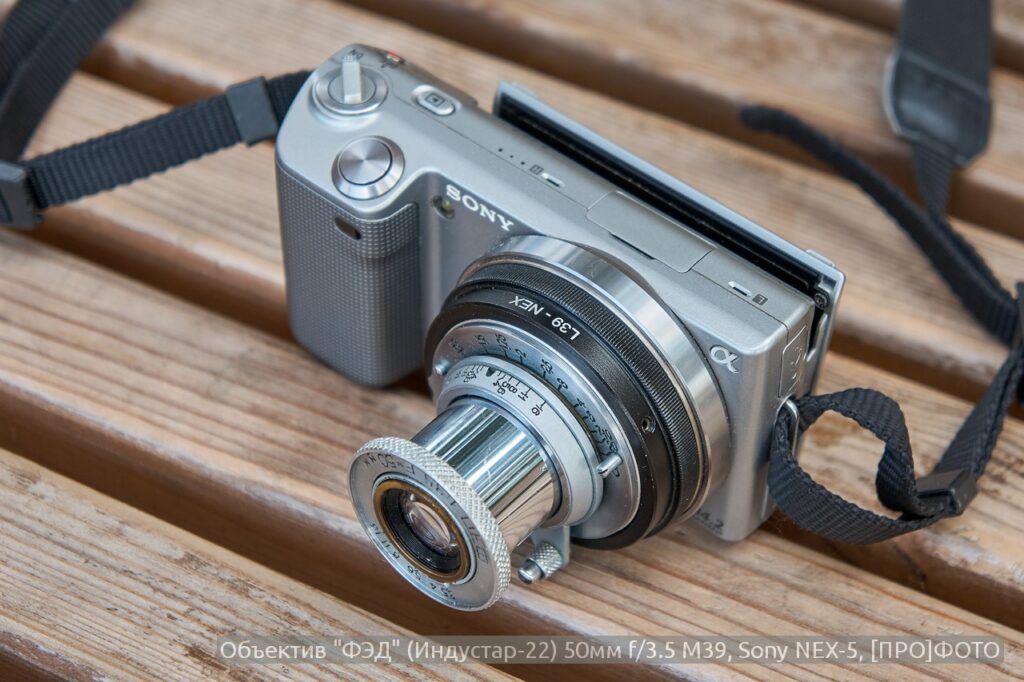 Despite its diminutive size, the lens is weighty. 50mm focal length is a universal size that allows you to shoot, if not everything, then a lot. A huge number of front-line photographs were taken with just such a lens and black-and-white film. By the way, despite the fact that the lens is from the film black and white era, it works great with color. Well, in the sense that the color is normal, without any distortion. 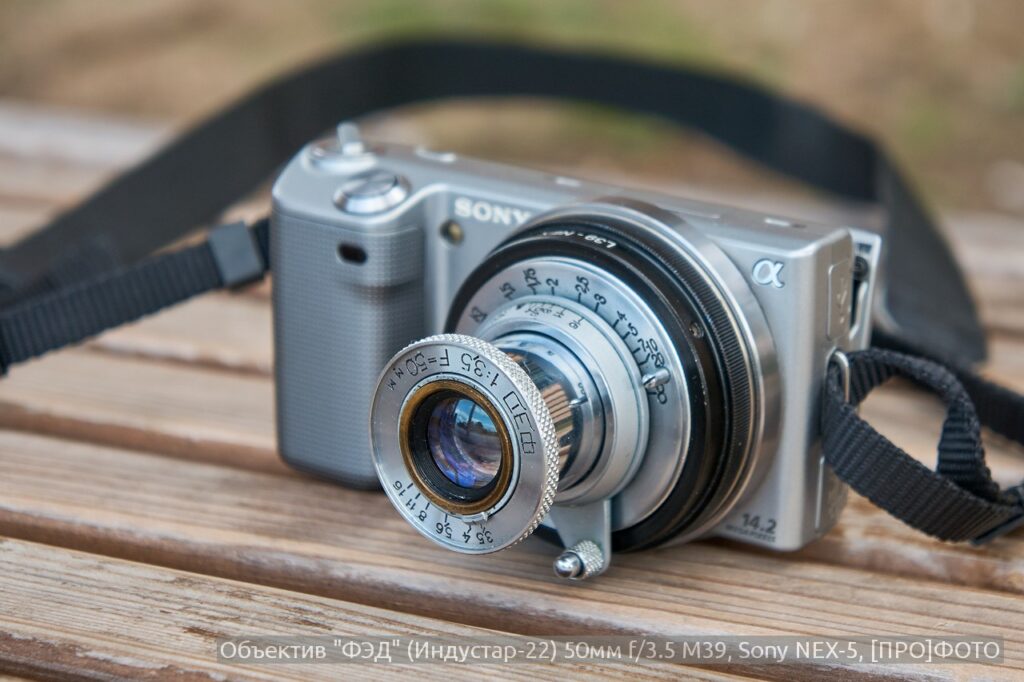 The depth of field of this lens allows for portraits as well. When shooting in low light conditions (eg indoors), it is better to have a camera with good working ISOs, or use a flash. 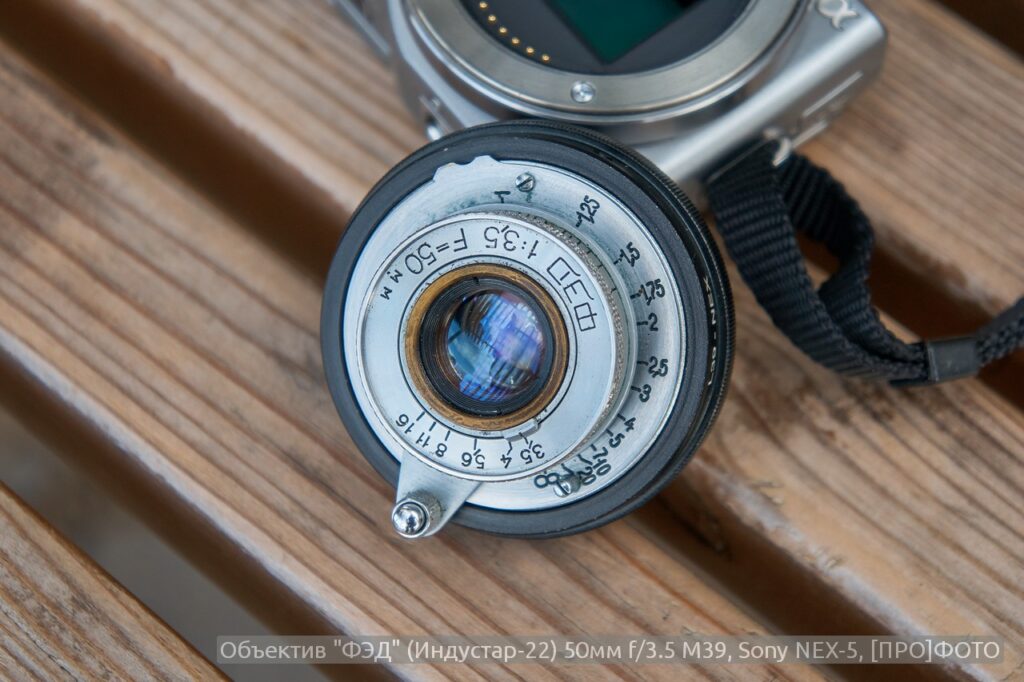 FED 3.5 / 50 (Industar-10) is a high-quality tessar of the beginning and middle of the last century. A very common lens, and under the Industar brand, it is almost the most popular lens in the USSR, due to its successful optical design, which combines both quality and low cost of production. A Zenit camera with an Industar-50 lens cost as much as 37 rubles cheaper than a similar one with Helios. 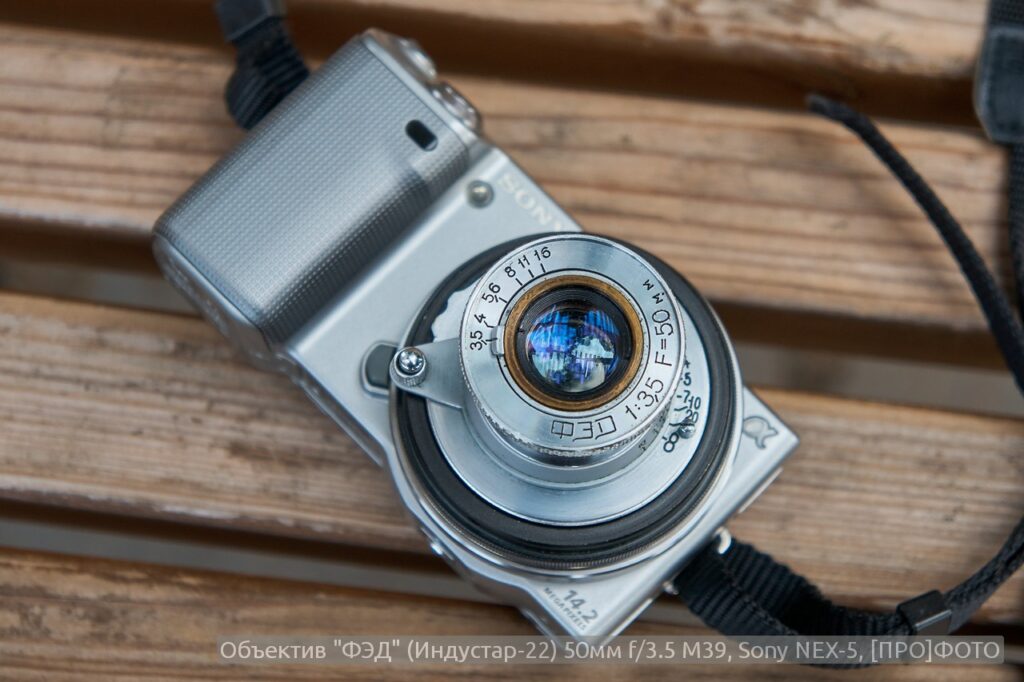 FED 3.5 / 50 is a standard lens for FED cameras of the first versions, and it would be bad not to offer to read reviews about these cameras

Well, and, accordingly, I will also suggest going through other lenses with a similar design.

By the way, this lens had its older brother in the lineup, which, despite its higher aperture, gives a worse picture. Meet

But the senior in the line has the status RARE, he can.

On a camera with APS-C sensor (kf = 1.6) the camera will have a field of view equal to the equivalent 80mm focal length, and the aperture will correspond to the value f / 5,6... Why is that? Because, firstly, because of the narrow viewing angle, you will have to move further. Secondly, the camera's sensor receives 1,6 times less light than a full-frame 35mm sensor. Thirdly, although this does not apply to the previous two statements, the lens on the crop has a drop in sharpness due to the denser arrangement of pixels on the matrix and their concentration in the center of the lens.

Despite the crop factor of the camera, sharpness remains appropriate even for a full frame image.

And yes, sample photos on a full-frame camera. See what an interesting picture. And below is a gif with a depth of field in a full frame.

The depth of field and background blur allows the subject's entire face to be in focus. The background "swirls" at an open aperture.

Since the FED 2/50 is a rangefinder lens (for film "mirrorless" cameras), when installed on a SLR camera, the lens can only be used as a macro lens.

Despite the slightly strange appearance for modern times, the FED 3,5 / 50 tube is capable of a lot. It is even able to compete for quality with modern optics, at a price of less than a thousand rubles on a typical day.