August 19, 2020
Experienced photographers know that Vega-28V and Vega-28B have different bayonets for medium format cameras. But I was not so experienced, so I happily bought the long-awaited lens and ... it's good that I didn't have time to take the adapter.
For the letter "B" denotes the mount from the early Hasselblad cameras, in the image and likeness of which we made such cameraslike "Salute" and "Kiev-88".
The mount for Vega-28B has a three-way thread and I have come across statements that this is why no one undertakes to make adapters with bayonet On modern cameras. That is, there are, of course, adapters (for example, KP-88 / N), but they are extremely rare and very expensive ... 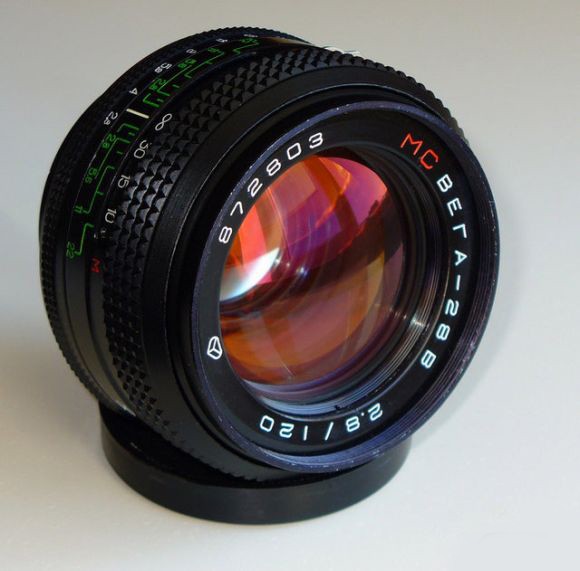 So, I became the owner of a rare, beautifully drawing lens and did not know what to do with him now. The fact is that I do not have special turning equipment, as well as direct hands, to make the necessary adapter myself. But the road obeyed the one walking!
In search of the flange distance, I began to sort out different options that would allow me to move the Vegu-28V away from the sensor of the Sony A7 Mark II camera to the desired distance. The options fell away one after another, until I remembered that I have a set of macro rings for Kiev-6S! 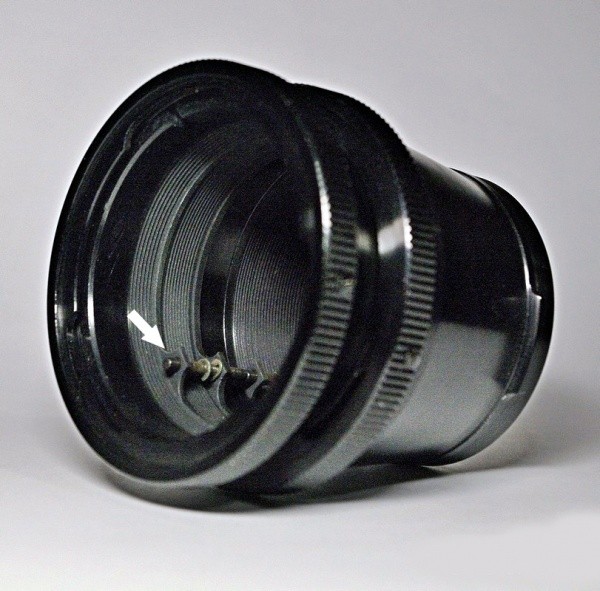 By a surprising coincidence, they ideally matched the M39-Sony E adapter. Well, how perfect ... In general, first I had to remove the diaphragm pusher lever from the rings (indicated by the arrow). Then cut off the metal protrusion closest to the edge, into which this lever passed. And now the first macro ring is fixed in the adapter!
I draw your attention to the fact that when you cut, work carefully at the end of the work. The fact is that from this metal protrusion I deliberately left a small nut, thanks to which the adapter was inserted into it with effort. If you cut off the ledge completely, then the adapter will simply pass freely into the macro ring and you will have to come up with another way of attaching the metal to the metal. 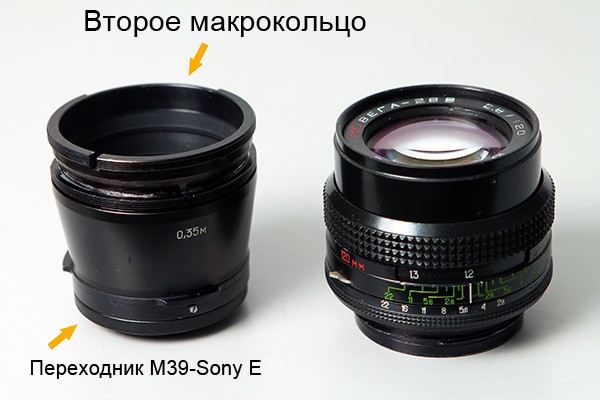 Next
If we simply connect the macro rings to each other, and attach the lens on top, then we will step over the border of the flange distance. And we will get a strange "macro lens", which will allow focusing only at a distance of 20 cm. Therefore, I sawed off three protrusions on one macro ring, which serve as mounts for a cap washer. And then, gently knocking with a hammer, he drove one ring deep into another ...
Happened! There is infinity!
So, my first macro ring is securely fixed in the M39-Sony E adapter. The second macro ring is securely fixed in the first one. But what about the lens? It turns out that if you unscrew the small retaining screw at the bottom of the barrel, the lens itself fits firmly enough into the macro ring! 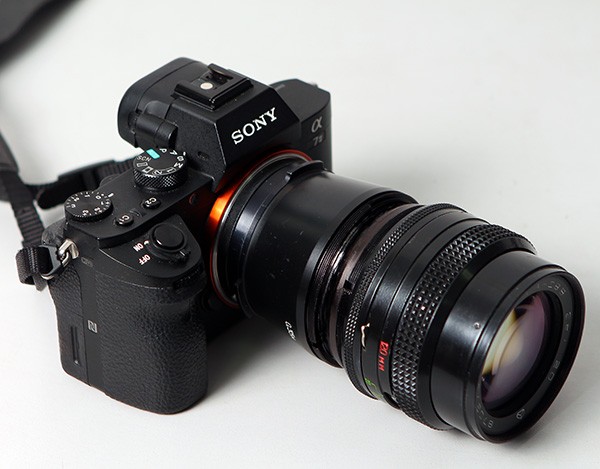 You cannot imagine this joy from the realization that after two hours of work you have an absolutely working lens in your hands! What did Vega-28V show when shooting?
When the lens is open, the softness is slightly noticeable. I think this is not bad at all for creating portraits (and this is what the lens is designed for).
Vega-28B tolerates backlight extremely badly - don't even try to shoot like that. Instead, consider purchasing a 62mm threaded hood.
The lens is very beautiful hips - it is no coincidence that "Vega" is given high marks precisely for the drawing. And here's another interesting thing - when you slightly cover the aperture, the background blur decreases, but hips remains beautiful, smooth and harmonious! I also note that at a fully open aperture, a pronounced twisting of the background is noticeable, the so-called "tunnel" effect, which is especially loved by young photographers.
Color rendering lens warm, cheerful, cozy. Contrast is not always enough, but the photo gratefully responds to any manipulations in the photo editor.
In general, Vega-28V is a truly interesting lens, it has its own design, atmosphere and mood.
So far I am posting just a couple of shots just to prove the presence of infinity and portrait characteristics. lens... And the real work awaits Vega-28B closer to May - when the first greenery appears and the photo sessions begin on the street!