The first telephoto lens with such a focal length was designed by the Japanese for sale abroad, and it was designed for use in rangefinder cameras with bayonetS. There is very little information about the Canon S 300mm f / 4.0. It is known that it was released at the very beginning of 1960, the optical scheme included 5 elements in four groups, the MDF was one and a half meters.
Surprisingly, for a telephoto lens with such aperture ratio lens there was a relatively small diameter of the front lens - suffice it to say that light filters with a 48mm thread were suitable for it. The weight of the lens turned out to be quite impressive - 1 kg. 200 grams. 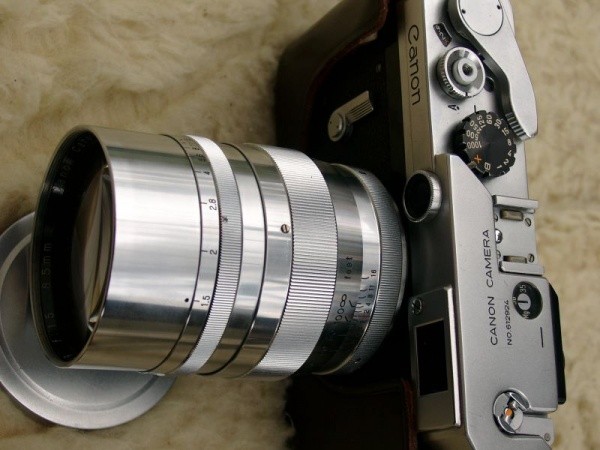 The first 300mm telephoto was installed on these cameras.

Meanwhile, already in 1959, Canon released its first DSLR with bayonetOhm R. And the park of optics very quickly replenished the Canon R 300mm f / 4.0 lens - it came out simultaneously with its rangefinder analog! This lens also had 5 elements in four groups, it had the same weight, MDF and filter diameter.

Since 1964, Canon has introduced a new type bayonet for their DSLRs - FL. Already in 1965, the Japanese released a good 85-300mm zoom with a constant f / 5.0 aperture. And four years later, the company has already presented fix with such a focal length - Canon FL F 300mm f / 5.6. The additional letter F in the name indicates that artificially grown fluorite crystals were used in the lens (for the first time in the world, by the way). This significantly reduced chromatic aberration, increased image contrast, and also helped make lenses more compact.
The lens included 7 elements in six groups (two elements - fluorite); had eight aperture blades; MDF increased to 3,5 meters; filter thread diameter - up to 58mm. The weight lens decreased sharply - up to 850 gr. 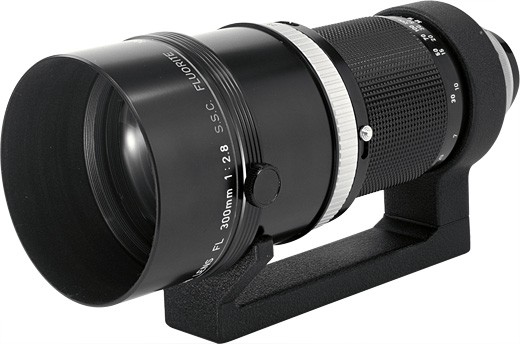 Looking ahead, I will say that the hero of today's review was released almost at the same time and, along with a lower aperture ratio, had ... DIFFERENTLY lower price.
Yes, we're finally moving on to lensm of the FD series. In 1971, the Canon FD 300mm f / 4.0 was released - but this is not our lens yet, since it does not have multi-coating, marked as SC (Special Coating). However, in terms of its characteristics, it already very much resembles the culprit of today's publication. The optical design includes 6 elements in five groups, the MDF is 4 meters, the weight is over a kilogram, the number of diaphragm blades is 8, the diameter of the filter thread is 58 mm.
It will not be an exaggeration to say that this was a budget telephoto version with a focal length of 300mm. Yes, it no longer has fluorite elements - but then the price is immediately reduced by more than two times ...
However, we must pay tribute to the Japanese - having seen the lens in work, they decided to improve it in a less expensive way. And in the spring of 1973 the hero of our review was born - already with the proprietary SC coating. Yes, it is not as "cool" as Super Spectra Coating, but it still improves the resistance to side and back light.
The rest of the lens is almost completely copied from its predecessor. Why "almost" - yes, because it was less weight, which suggests certain design changes 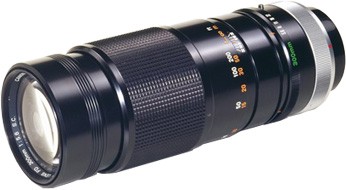 But this is not the end of our journey into history. A year later for bayonet FD produces a 2.8mm f / XNUMX telephoto lens. He has been improved focusing (made even smoother), and the aperture control unit was also improved, after which its blades no longer lagged at the moment of triggering shutter.
In 1977, an improved analogue of the hero of our review appeared. From now on, the red abbreviation SSC proudly flaunted on it. In addition, the lens became twice as light and received an internal focusing system (now, instead of the entire lens unit, only the rear group of lenses moved). The MDF has decreased by a whole meter, the diameter of the thread for the light filter has also decreased - to 55 mm.

But that's not all.

In the late 1970s, Canon released two more 300mm models to complete the FD lineup. lens - but with the f / 4.0 aperture so familiar to us. These were the original "fathers" of modern telephoto lenses with bayonetohm EF and focal length 300mm ...
After Canon has improved its bayonet, and the NewFD mount appeared, several more lenses with a focal length of 300mm saw the light. For example, in 1979 - with an aperture of f / 4.0, 6 elements in six groups, nine aperture blades and a minimum focusing distance of three meters.
In the same year, a less expensive version with an aperture of f / 5.6 appeared. A year later saw the light of the option lens with aperture f / 4.0 and letter L. A year later, another "elka" appeared - but with an aperture of f / 2.8.

Well, in 1987 the era of a fundamentally new bayonet EF, which is so familiar to us today. As you know, when switching to a new system, the flange focal distance was lengthened - that is why now we cannot use lenses with bayonetohm FD on modern Canon cameras.
In 1987, the company faced a serious task - as soon as possible to equip cameras with a new bayonetohm. The first to reach a focal length of 300mm were two 100-300 zooms with f / 5.6 aperture (one of them is L-class). Then came the "eleky" fix with aperture f / 2.8. In 1991, the company released a less expensive Elka with f / 4.0 aperture. Six years later, a variant with image stabilizer appeared. In 1999, the company made its competitors breathe by presenting fix with aperture f / 2.8 and stub. In 2011, the second version of the same lens... And today it is one of the pinnacles of optical engineering. Price lens is $ 7500 ...
***

Summing up, I wanted to describe my lens as a "solid middling". But then he suddenly thought. You cannot call a lens with such a focal length "middling". After all, they are already consciously approaching the purchase of such a lens, having experience in photographing and understanding what exactly you want to get with the help of a telephoto lens.
Therefore, when developing such lenses, any company will work especially carefully - even if they are working on a budget option. 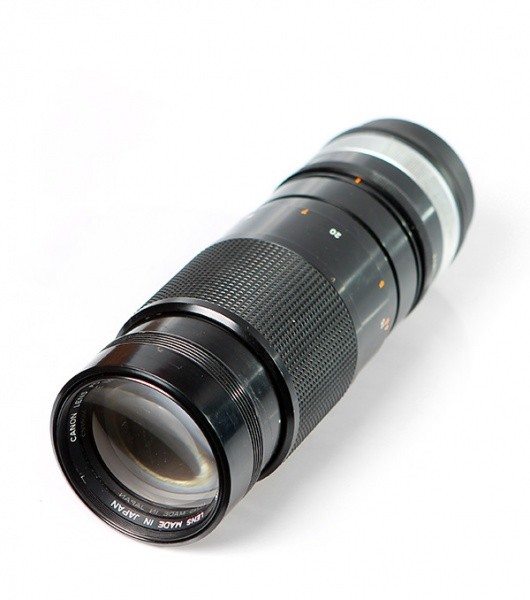 That's why when working with the Canon FD 300mm f / 5.6 SC, the excellent sharpness at open aperture is immediately apparent (see the cat example below). This is why the level of chromatic aberration is so low. This is why the lens fits so comfortably in your hand and allows you to focus smoothly and quickly change apertures.
This lens cannot boast of any super-artistic hips - but on the other hand, it is predictable, calm and even. The color rendering of the glass is normal and even. Vignetting is almost invisible. But he still does not like backlighting, and therefore the hood will not be superfluous.
In general, if you come across such a working lens for 2500-3000 rubles - take it, you will not regret it. If we compare it with the domestic telephoto "Tair-3", then the Japanese analogue with a lower aperture differs in much better ergonomics, contrast and sharpness. In addition, it is much lighter and more compact. I am sure that with the Canon FD 300mm f / 5.6 SC you will get more interesting shots with less effort.