Super Takumar 2.8 / 105 and Auto Takumar 2.8 / 105. Yes, contrary to usual, in this review I will simultaneously test and review two photographic lenses. They have the same focal length and the same aperture ratio. But here's a drawing ...

While preparing this review, I thought again - where is the border between the subjectivity of perception and the real performance of the lens? After all, it's not just "how I see it." It's also about how I test, what is the weather outside at this time and what my mood is ...
In general, to the point. 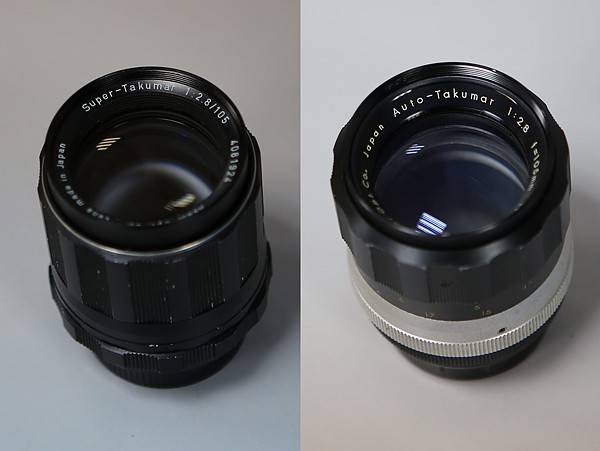 In my opinion, Super Takumar 2.8 / 105 for nothing has such a proud increase. Colors seemed muted, harshness ambiguous, and hips - indistinct. And here Auto Takumar 2.8 / 105on the contrary, pleased. The drawing is cleaner, lighter - not as heavy and mundane as that of the previous hero. In general, Auto Takumar is softer, or something ... Yes, and its bokeh is so plastic that you want to touch your fingers ... And the doubling of lines in the blur zone is very pleasant ... I note that Auto Takumar's aperture blades are not only larger (8 versus six), but they are designed in such a way that, when closed, they create a pleasant roundness of the diaphragm hole ... But in the Super Takumar, already at f / 5.6, the nuts in hips.

But if I was asked - which of these Takurmars would you choose? - I would honestly answer: "None!" Well, I don’t like them, or something ... I had a fifty kopeck 1.4, which I gave back without regret. These hundred square meters did not impress me either. Although it should be noted that the nature of the company can be traced in all glasses. The general tonality of the Takumar drawing tends to be somewhat "smoky", "mythical", and hidden. It's like a “lens in itself”, which transforms reality into something as if looking at us from the past ... Hence this feeling of heaviness, unhurriedness, withdrawal into oneself.

Do you know what I would shoot Takumaram? Probably something like a lonely flower against the background of a burning hut after the raid of nomads ...
I would like to express my gratitude for the provided lens to Andrey Spirin.