Which memory card to choose

There are tons of different types of memory cards out there, damn your leg to figure it out! I will try without water, only the most important thing! Read to the end, there are conclusions!

What memory cards are 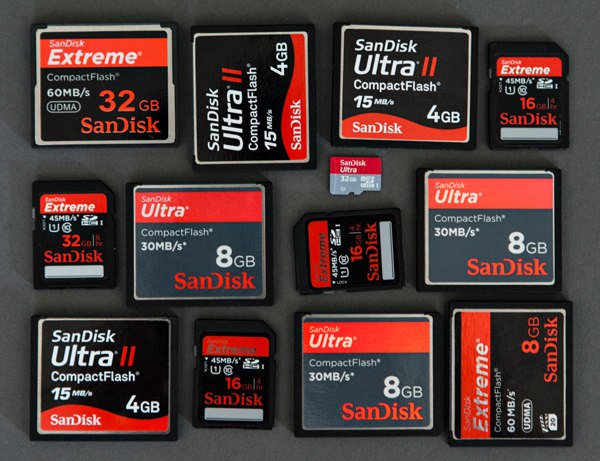 This type of card has 3 abbreviations - SD/SD_HC/SD_XC
Secure Digital (SD) - the old format with a maximum volume of no more than 2GB, you cannot find such formats now, you can forget, because such a volume is small in any device!
Secure Digital High Capacity (SDHC) - already have a volume from 2GB to 32GB and these are the most common cards on the market!
Secure Digital Extended Capacity (SDXC) - New standard with memory capacity from 32GB to 2000GB and speeds up to 312 MB / s!

SD cards are plastic and tend to break and crumble! And it is very difficult to fix it if the case is broken. But if you use it through an adapter, then after breaking the adapter, replace it with another one and the card will live for a very long time!

WHAT to look for when buying! And yes, there are still miniSD but this format is no longer used anywhere, you can forget!

For modern cameras (18-24 megapixels), I recommend taking 16-32Gb memory cards! It is better to change more often, otherwise if your one large 64GB flash drive glitches while traveling or on shooting, in order to shoot further, you will have to format and you nlose all data! But if you have 2 x 32GB, just change the card and shoot further, and restore the second one at home, it's very easy to do it at home!

If you are into photography, then write speed must be not less than 2-3 RAW files in 1 second! See how much your one RAW file weighs, open the USB flash drive on your computer and click on the file properties.

A UHS-II memory card can be used with cameras supporting UHS-I, but the transfer rate will be reduced. To take advantage of the fast transfer rates of UHS-II cards, make sure your camera supports them.

If you have an "old school" camera, for example Nikon D700 or some of Canon 5D, then you definitely know these large, thick, square memory cards, which are not used anywhere else at all, and in order to drain something from it, either connect the camera to a computer, or Card reader buy (very much I advise by the way).

This type of memory card has its advantages, it is a higher speed, due to the built-in controller directly into the card (for SD cards, the controller is built into the camera and the speed depends on this too), but given the physical size of the card itself, and the fragility of the connection - soon she will disappear as a class in the future!

Here you only need to know one thing, the speed, which is indicated by a number and "X" next to it, for example 600X or 1000X. This parameter shows how many times the card is faster than the CD.

There are adapters that allow you to insert the SD into a camera where the CF slot is. that is, insert the SD into the CF card and work! But alas, they all greatly reduce the data transfer rate, even if you have a fast SD, the adapter will greatly reduce the speed. And they are all like that, you won't find anything good. Therefore, if you have a CF car in a camera, either change the camera or buy a CF!

A new memory card format developed by Sony and introduced with Sandisk and Nikon. The fastest and most advanced type of memory card at the moment! But almost nowhere is it supported except for Nikon D4, D4S, D5, D850 and D500 cameras (these cameras have an option, when buying, choose which slot you want - XQD or SD + CF)

Perhaps the future belongs to them, but so far there is not a lot of tolu from them! And the price is huge!

Only these cards are currently relevant on the market: MicroSD, SD, XQD and CF. And the most common and profitable is MicroSD. If you are taking photos, then the optimal one is 16-32GB. For video, I highly recommend taking 64GB.

Other types of cards

Which manufacturer is better to take?

In fact, it makes no difference! Everyone dies in about the same way! Better, of course, to prefer the more famous brands Sandisk, Kingston, Transcend, Toshiba, Sony.

Check what the maximum memory card size your camera can support! This is written in the instructions, and it's even easier to ask Google! Because older models sometimes do not support more than 32GB!

In shops "around the corner" such as "Svyaznoy" or "MediaMarkt" - cards are on 30% more expensive than on the internet! Always look at Yandex.Market the cheapest price!

Any memory card can die at the most crucial moment! Therefore, if your camera has two slots for memory cards, make the second card - BACKUP!

Do not carry all the photos with you, from past photo shoots!

Buy a very simple and cheap 32GB flash drive. And throw it in your bag "just in case", they often forget the flash drive in their computer, and come to the shooting without it! And so at least some will be with you!

Do not throw cards at random and anywhere!

To know which cards are clean and can be taken, and which ones still have unmerged photos! YES and the cards will live much longer if they do not dangle and beat anywhere!

Article author - Photographer Stanislav Ivanitsky
Stanislav is not only professionally engaged in photography, but also publishes useful videos on your YouTube channel