The Fujifilm FinePix X100 is a mirrorless digital camera announced by Fujifilm in September 2010 and has been on sale since March 2011. The FinePix X100 has a retro design reminiscent of rangefinder cameras from the 1960s and 1970s.

The camera is equipped with a fixed fast Fujinon 23mm f / 2 fixed focal length lens and a relatively large APS-C CMOS sensor with a crop factor of 1,5; equivalent focal length lens is 35 mm. A unique feature of the model is the hybrid viewfinder, which can be switched between optical image and electronic viewfinder.

The camera has won numerous awards for design, technology and image quality. Manufactured in Taiwan, Miyagi Prefecture, Japan. The recommended cost is 1200 USD in the USA, 1000 EUR in the European market and 40 000 rubles in Russia. Designed for professional photographers and enthusiasts looking for a compact camera with exceptional image quality.

In January 2012, the company introduced a camera with interchangeable lensmi Fujifilm X-Pro1, which incorporates many of the design and construction features of the FinePix X100. In January 2013, the successor to the Fujifilm FinePix X100 appeared - the Fujifilm X100S camera, which inherited the appearance from the X100, but received seriously modernized electronics and improved ergonomics. 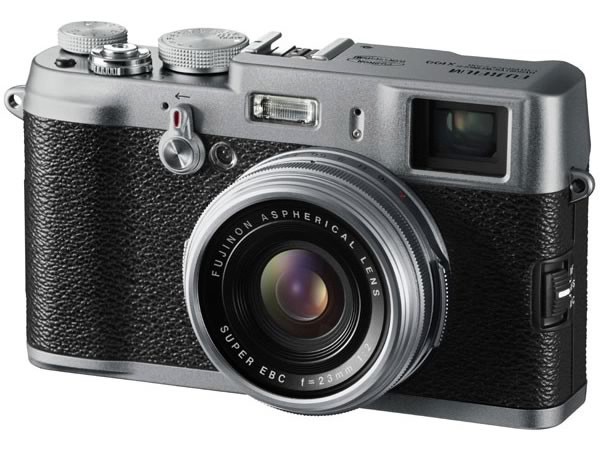 The top panel and bottom of the camera are made of magnesium alloy. Setting the shutter speed and exposure compensation is carried out using the dials located on the top panel of the camera. The aperture is manually set on the lens. Manual focusing lens... In this case, fully automatic exposure control in program mode is available. The camera is quite light, which is a big plus, because traveling with a heavy camera can be tiresome, ruining the whole experience.

The lens specially developed by the company for the X100 and classified as Fujinon has focal length 23mm and 1: 2 aperture equivalent focal length is approximately 35 mm. Optical design lens Includes 8 elements in 6 groups, including one reversible molded aspherical element. Between the first and second group there is a neutral filter, gate и diaphragm... The distance between the rear lens and the sensor is only 5,6mm.

During the development of the camera, several options for the equivalent focal length were initially considered lens: 24 mm, 28 mm, 35 mm and 50 mm. The creators estimated the sizes lens, its ability to meet user expectations, and its breadth of application.

In order to obtain an attractive background blur pattern, the lens uses a 9-blade diaphragmproviding an almost perfectly round hole.

The camera is equipped with a 12-megapixel CMOS sensor measuring 23,6 × 15,8 mm (crop factor 1,52). According to DxOMark tests, at the time of its appearance, the X100 had the best sensor among non-mirror cameras in terms of the combination of characteristics (dynamic range, noise level, the number of distinguishable colors and grayscale). Only the models that appeared later received higher marks: Sony NEX-5N, Sony NEX-7, Pentax K-01.

The set includes an NP-95 rechargeable battery and a BC-65N charger, a shoulder strap and a metal clip for it, a USB cable, a cover lens... The CD contains the Viewer and Raw File Converter software.

Especially for the X100, the LH-X100 hood was released, complete with an adapter ring (retail price in the USA in January 2012 - about $ 130, in Russia - 4500 rubles) and a separate AR-X100 adapter ring ($ 50 and 1900 rubles, respectively) ... The adapter has a threaded connection with a diameter of 49 mm and is designed to install light filters, tele- and wide-angle converters, as well as other accessories with a corresponding thread.

The camera is compatible with Fujifilm EF-20 and EF-42 flash units.

Third-party manufacturers produce various accessories for the X100, including covers for the shutter release button, covers, interchangeable panels, etc. Like many cameras Fujifilm, this model can be connected to the phone via Wi-Fi. By downloading the FUJIFILM Camera Remote application to your smartphone, you can upload photos directly to your phone's memory.

On May 15, 2012, the WCL-X100 wide-angle converter with 0,8 magnification was announced and launched in June, which, when attached to the lens, provides an equivalent focal length 28 mm (real focal length will be 19 mm). To use the converter, a firmware update to version 1.30 is required.

The converter is available in both silver and black. The recommended cost is US $ 350.

In May 2014, the TCL-X100 teleconverter was released, with which the effective focal length lens becomes equal to 50 mm. For the correct operation of the teleconverter, a firmware update to version 2.10 is required.

The converter is available in silver and black. The recommended cost is US $ 350.

The camera was presented on September 19, 2010 on the eve of the Photokina exhibition, which took place in Cologne from September 21 to 26. On February 8, 2011, a commercial announcement took place: it was announced that the X100 will be on sale in March at a price of 1200 US dollars or 1000 euros. On March 8, the company warned that supply delays were expected due to strong demand, and three days later an earthquake and tsunami hit northern Japan, which halted production.

The factory in Taiwan was located about 100 km from the epicenter of the earthquake and was damaged. None of those who worked at the enterprise were injured, but the delivery time was shifted. The company was able to quickly restore production, the assembly line was restarted on March 23, and supplies were resumed on March 28. The earthquake and tsunami did not affect the production of the company's other models, as they are located elsewhere.

Fujifilm has published a video showing how the company was able to restore the production of the X100 in a short time.

An interesting advantage of the camera is a set of built-in photo filters and a working camera JPEG. With filters like this, you can take truly amazing photographs that resemble vintage shots.

On January 10, 2012, the release of a limited series of Fujifilm FinePix X100 was announced, from March 8 it went on sale. Cameras of this series have a black body, a leather case is included, black on the outside and red on the inside. The kit also includes an adapter ring, a lens hood and a protective filter. Each camera is supplied with a certificate with a serial number. The limited edition is 10.000 pieces.

The firmware of the camera can be updated by the user. To do this, you need to download the latest version of the software from the official website, copy it to a formatted SD card and turn on the camera while holding the DISP / BACK button. As of November 2013, the company has released several firmware updates, the current version is 2.10.

There are only three models on the market equipped with a non-replaceable fix-APS-C format lens and sensor. They all lack a viewfinder - just an LCD screen on the back for real-time targeting.

Sigma DP1 and DP2 are in the same price range and equipped with lenswith the equivalent focal lengths of 28 mm (DP1) and 41 mm (DP2). The cameras have a 1,74 crop factor sensor based on Foveon X3 technology. The models went on sale in 2008-2009; the updated versions are called DP1x and DP2x.

The camera has also received awards from a number of reputable publications: