The first generation lens was considered not a very high-quality purchase due to the many aberrations and low sharpness.

The lens is a kit. What is a kit lens?

Over time, the model has been refined and improved. At the moment, there are several generations of lenses. The generations are distinguished by their cosmetics, the quality of optics, the presence of a stabilizer and a motor. Until now, these lenses are supplied with Canon Ef-s cameras. 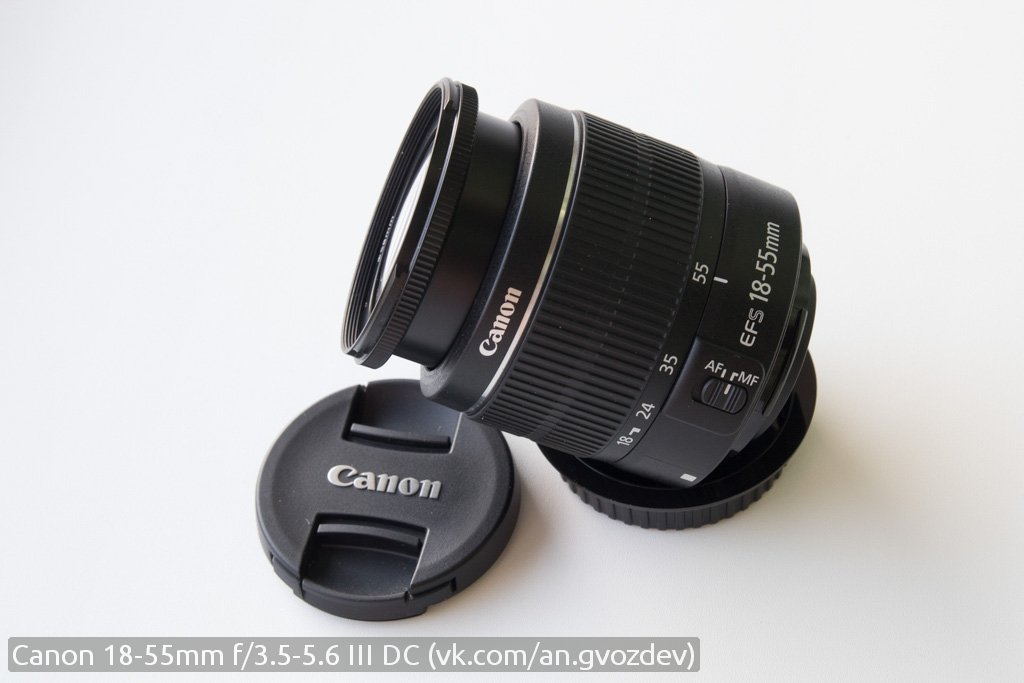 Canon EF-s 18-55 come bundled with EOS cameras with bayonetohm Ef-s. The first lenses of 2003 did not have very good image quality, even by the standards of a whale, so after a while a second version was released, and a little later, a lens with a stabilizer was released on the basis of the second version. By the way, lenses of later modifications, despite slightly better image quality, have obvious production optimizations. The lens from the review refers to 4 upgrades, and was bundled with the Canon 1300D.

Canon EF-s 18-55mm III DC body and bayonet the mount is made of plastic. The zoom ring is rubberized, the focus ring is a plastic molded in the frame. Diameter for light filters - 58mm. The hood fits into the "socket" on the body, in front of the focusing ring. The light filters are screwed into the plastic case of the lens unit, the thread is internal. The production of this lens is Malaysia, a lens from a "whale" set. There is a switch on the body - focusing mode. The copy from this article is not equipped with a stabilizer and is a simplified version. Canon EF-s 18-55mm f / 3.5-5.6 IS II.

The Canon EF-s 18-55mm III DC is very lightweight and easy to handle. Many started with this glass, and many know it like the back of their fingers. For its price, the lens has everything you need, and even more. Canon EF-s 5-18mm f / 55-3.5 III DC is a zoom lens, that is, it has a variable focal length... The main probable and practical application is an entry-level standard lens. Supplied with cropped cameras like Canon EOS 1100D, EOS 60D, EOS 650D, EOS 1300D, EOS 300D, EOS 600D, etc. with bayonetohm EF-s and crop factor 1,6. 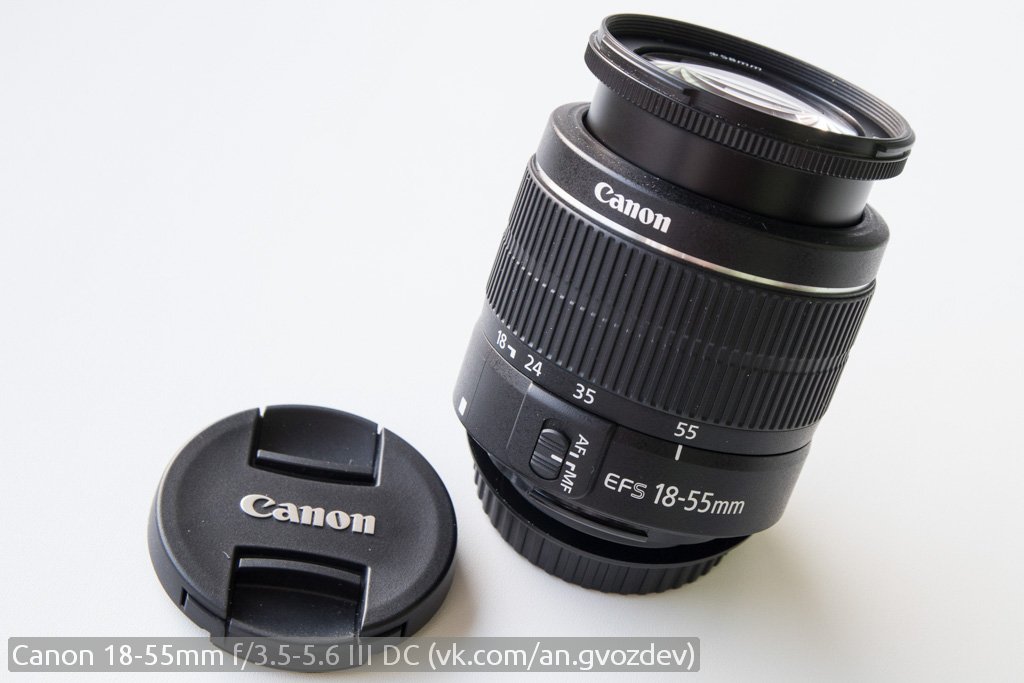 Canon EF-s 18-55mm III DC focusing drive is stepping, there is no possibility for manual adjustment without switching to manual mode. When focusing, the front part rotates around its axis. Outside focusing, the lens is a potential vacuum cleaner. During focusing, the lens works loudly, despite the fact that it happens quickly enough. Nevertheless, the lens hits the target as it should and always hits the mark. The focus ring, as such, is missing from the Canon EF-s 18-55mm III DC, and the manual focusing by rotating the front lens barrel. In this case, the switch on the body must be in the “MF” position, since manual focus adjustment in the “AF” mode is not provided. 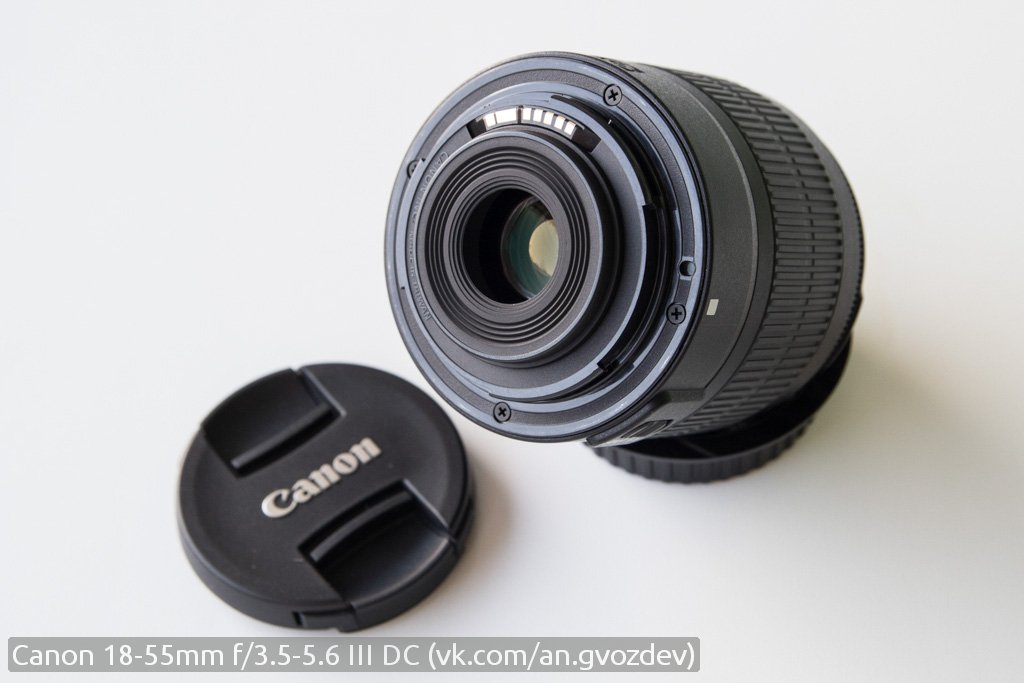 More precisely, there is a possibility, but using it will lead to a breakdown of the focusing mechanism. The AF-MF switch mechanically opens the drive. Focusing is carried out in the range from 0,25 meters to infinity. Infinity comes from about 30 meters. There is no focusing scale and depth of field calculation, manual focusing is possible only through the viewfinder.

The diaphragm is electronically controlled, rounded, has six blades. Maximum relative hole 1: 3.5 at wide angle. At the far end of the zoom, in the 55mm position - 1: 5.6. Variable focal length lens with variable aperture. In fact, the lens is not suited for indoor and low light conditions. At least you definitely have to use a tripod. In addition, you will have to bully every time ISO. 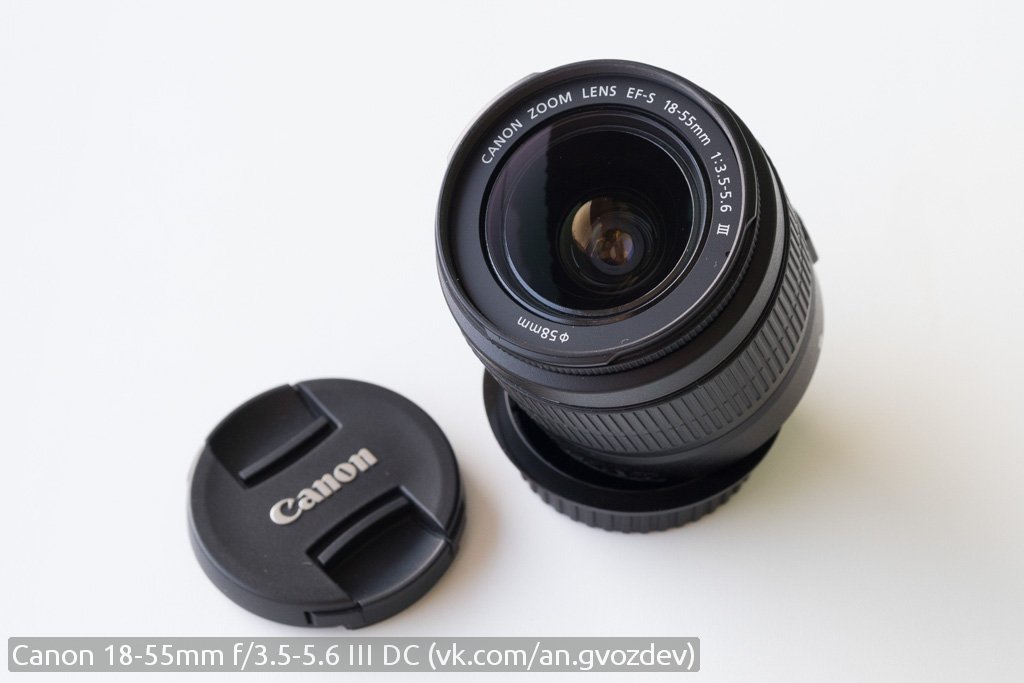 On closer inspection, especially when viewed on monitors with high resolution, all its disadvantages will be noticeable, including (still) insufficient sharpness, color distortion, chromatic aberration, distortion and vignetting at a wide angle. Edge sharpness lens much lower than in the central part. Contrast lens normal, the colors in the photo are faded. During post-processing, various color distortions come out. Shadows usually fall into black, then it is difficult to draw even from RAW. The situation is the same with overexposures. 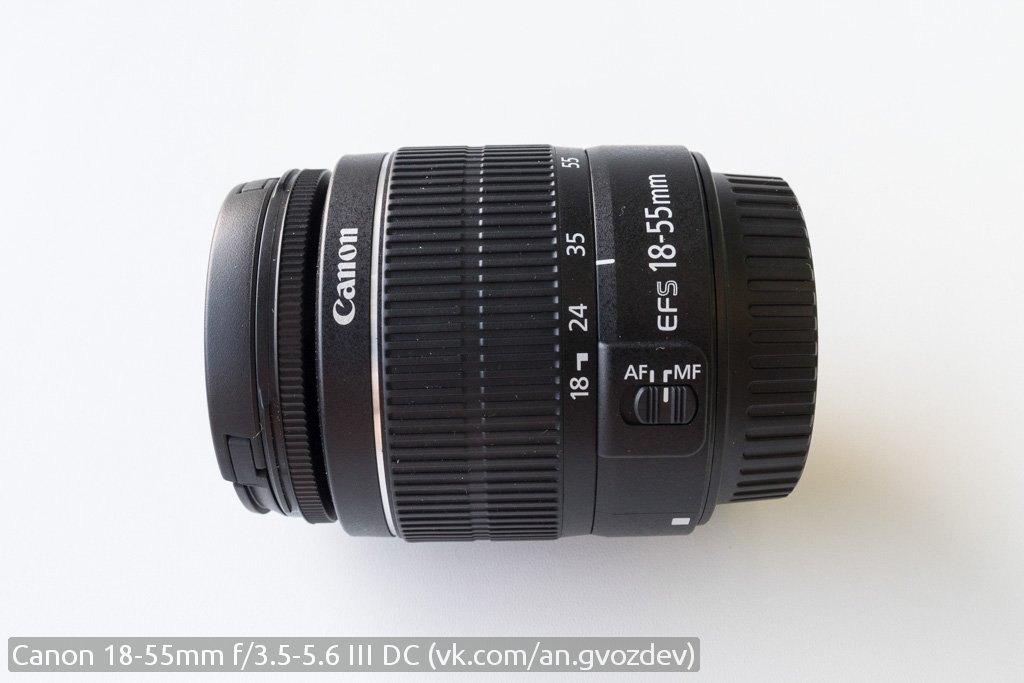 The light meter of a camera with a lens does not often make mistakes, mainly in difficult conditions. It is almost impossible to shoot in side and backlight. Some older lenses do the job better. The first experience of communicating with the whale Canon 18-55 was not very successful, which cannot be said about the repeated case. I was not lazy and drove with him for a couple of weeks, using a staff. A bit of color correction in post-production and use lens given its shortcomings, it has borne good results. Yes, the lens is not adapted to work in low-light locations, but nevertheless, it is not so bad. 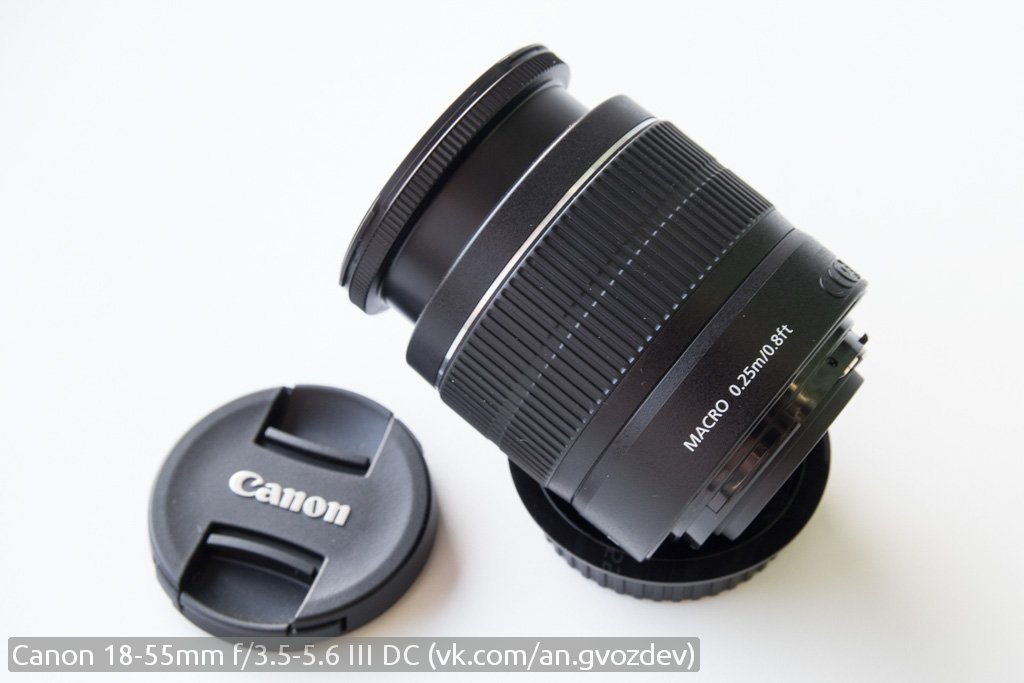 If you develop further, then you can take something from the lenses more seriously for the crop. Immediately, a qualitative leap in the image will be noticeable. 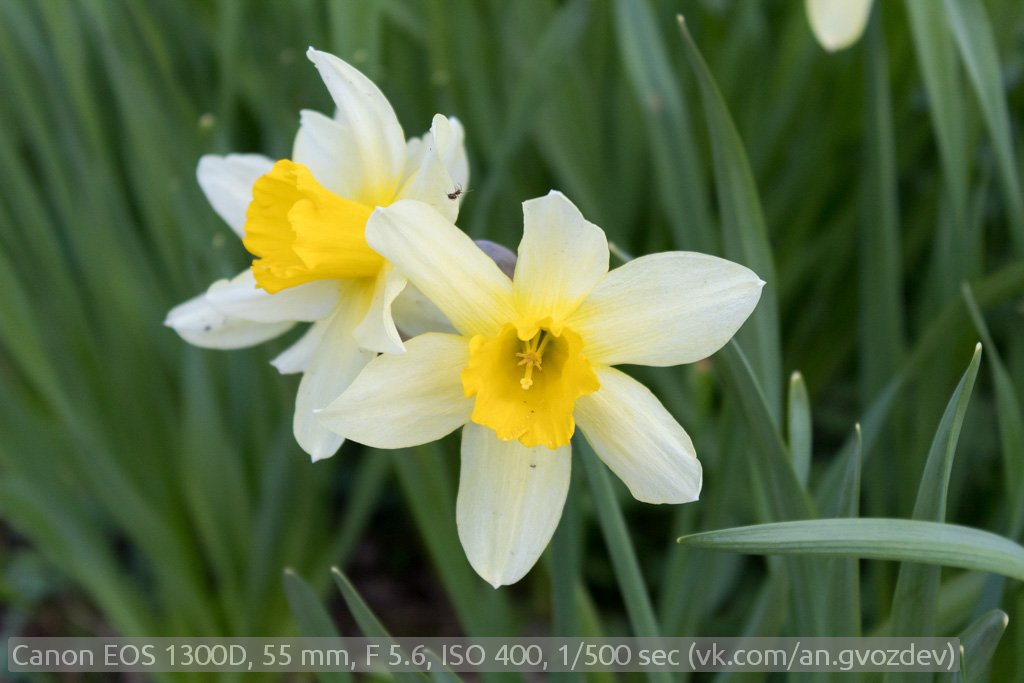 In general, the lens has a sufficient set of characteristics to allow printing photos for a family album, up to a maximum size of 20x15cm. You start to feel the difference in quality when you put on your camera a lens from the L series (the same old Canon EF 28-80 f / 2.8-4 USM), or analogs from Sigma or Tamron. Knowing the obvious shortcomings of Canon 18-55mm, with skillful handling, nevertheless, some of lens you can pull it out. In the early stages, the lens allows you to understand what to focus on in the future. For a beginner, at the time of acquaintance with the technique, a very suitable option. Some manage to shoot masterpieces and optics of a similar plan (samples do not pretend to be a masterpiece). In the secondary market, you can easily find it for a cost of two thousand rubles.