The K-1 2x converter was produced at the Arsenal plant in Kyiv. Against the background of Canon Extender 2x, of course, the K-1 converter looks frail. However, this does not detract from its merits. Review converter provided Alexey Ganichev, for which he is immensely grateful.

Device for SLR cameras with M42 threaded connection. Installed on modern SLR and mirrorless cameras through the appropriate adapter. Read the article about adapters.

Converters were used as an inexpensive alternative for obtaining a long-focus lens from a stock one. The K-1 converter is very compact, while providing a two-fold increase in focal length. Converter K-1 has a threaded connection on both sides of the frame. 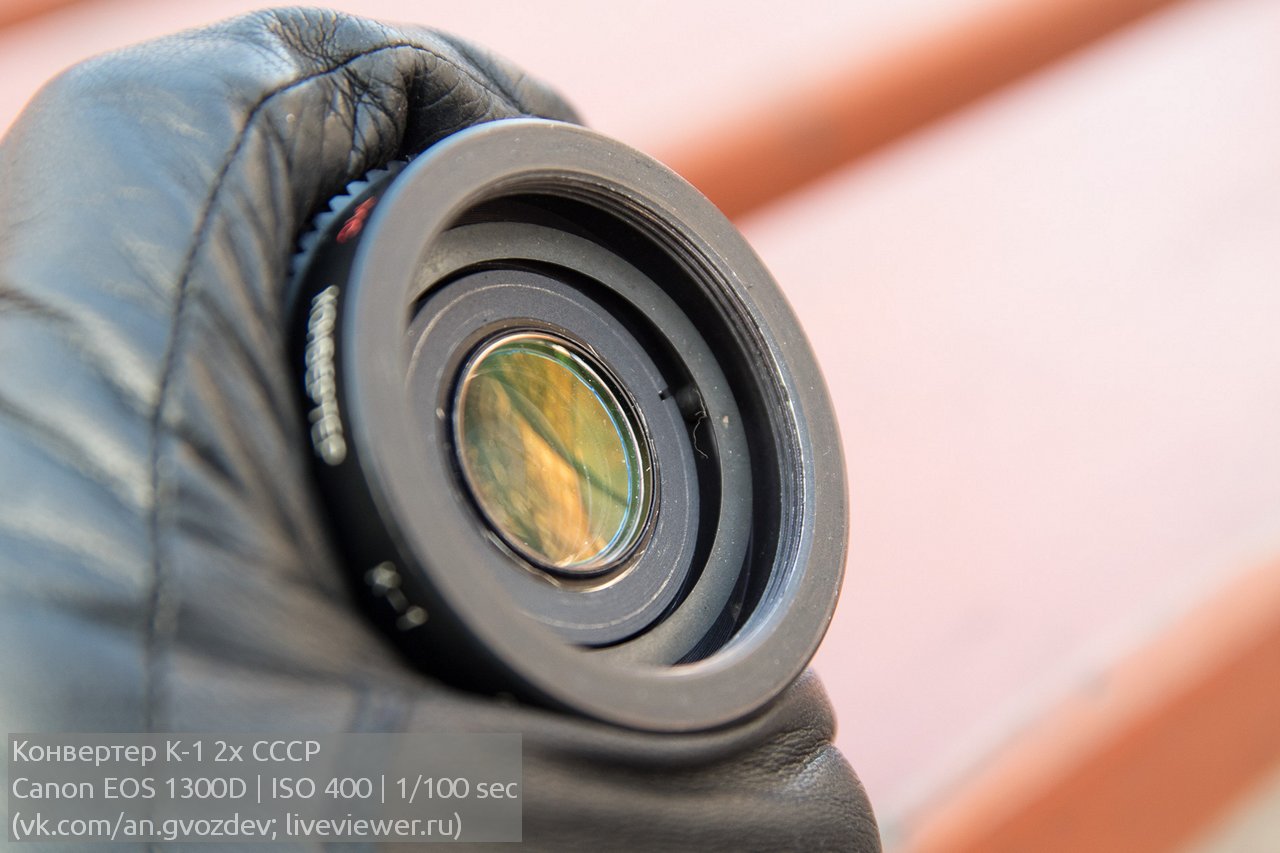 It was implied, and, in fact, the converter was used with Zenit, Praktika cameras, as well as with optics with M42x1 threads.

Description of the K-1 converter

The converter housing is made of aluminum. In the center of the frame, cyclically, in a circle, there are protrusions that improve the grip. A diaphragm pusher is built into the converter back. As I understand it: for lenses with an automatic (jumping, blinking) aperture, the converter also served as a kind of extension cord, transmitting the mechanical force of the camera aperture repeater actuation. 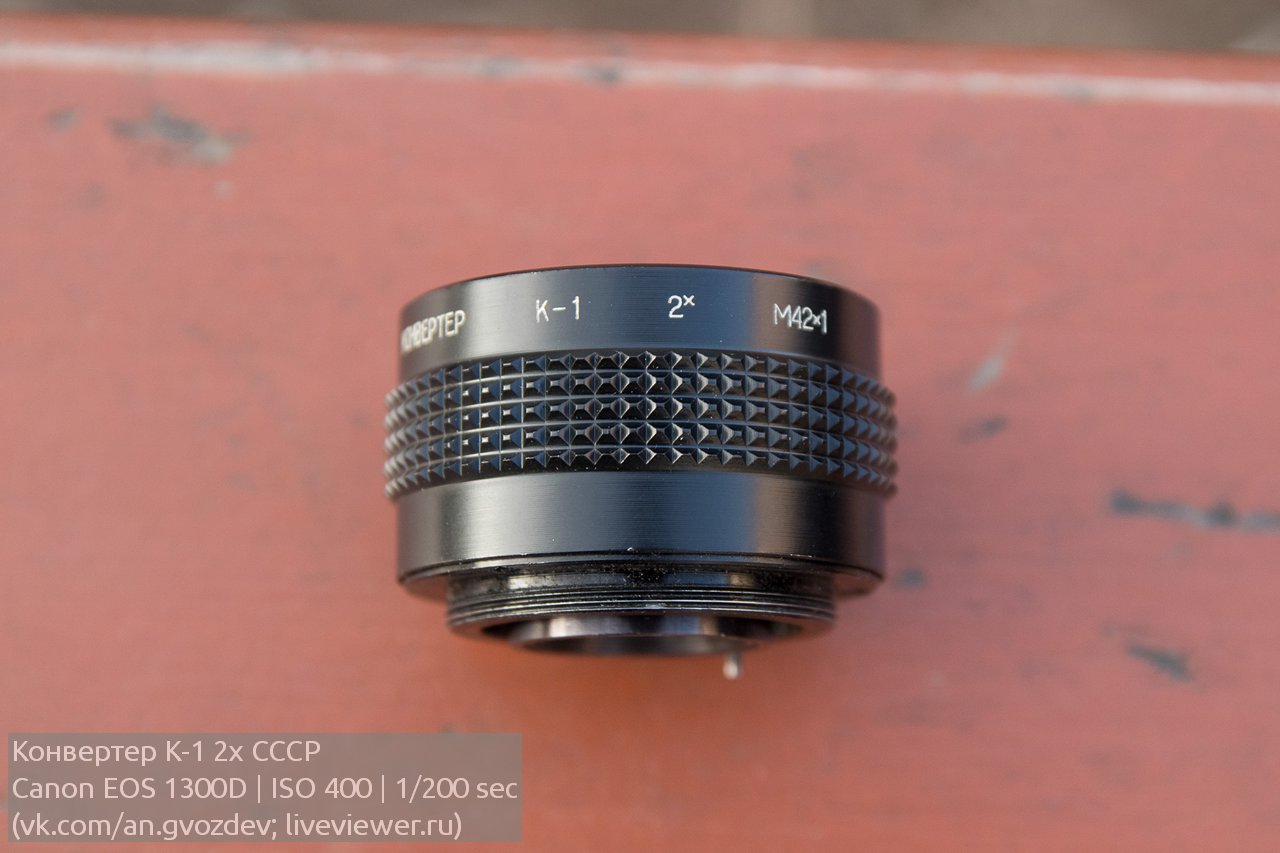 Actually, the only mechanical part in this converter. The serial number of the specimen participating in the review is 890873. All names and marks are engraved and then filled in with paint. The optical coating is multilayer, the lenses are yellow-green. The wardrobe trunk, in which the converter is mounted for carrying and storage, also serves as a back cover at the same time. 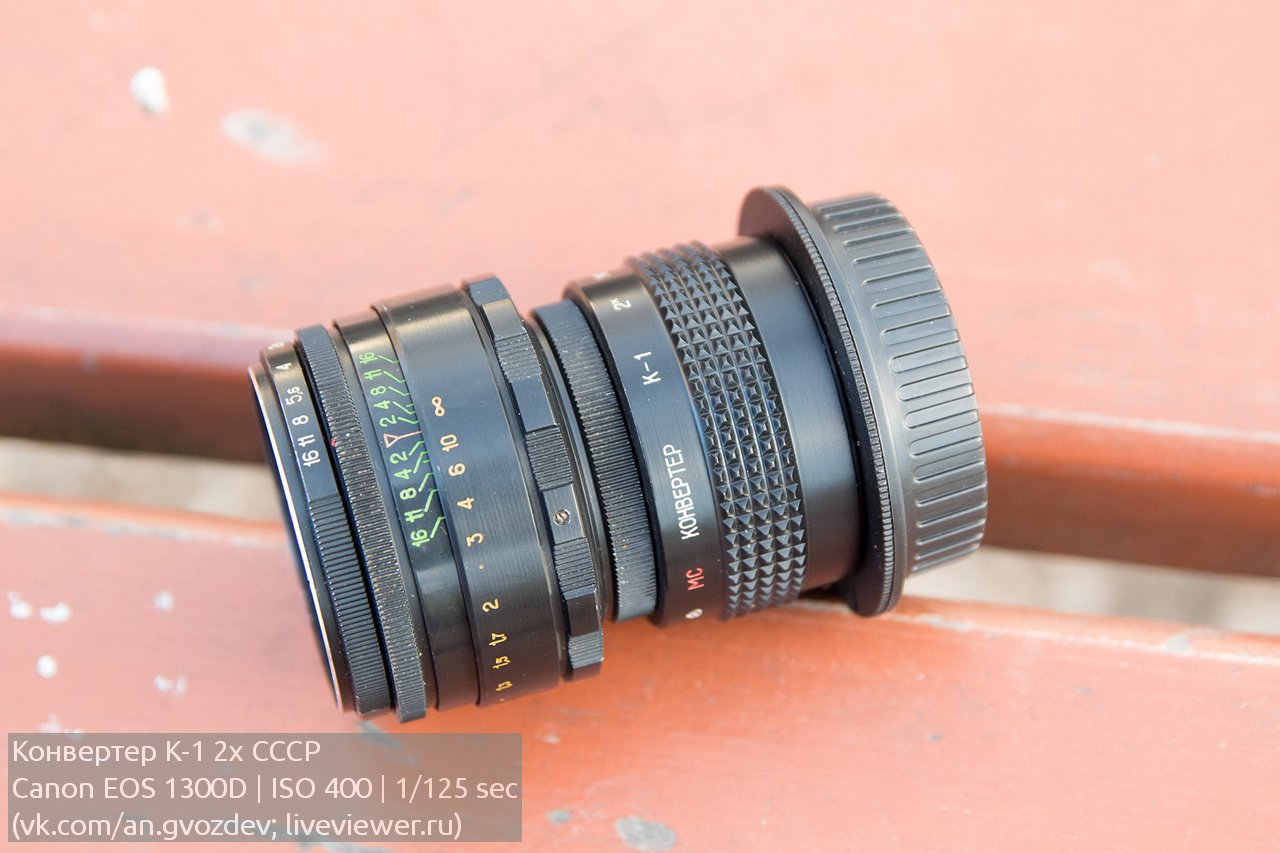 The front cover on the converter is screwed on separately, then the case is assembled from two halves. The dimensions and weight of the converter are so insignificant that at first I was surprised. Compared to the Canon 2x Tele-converter, the K-1 is significantly smaller in volume.

When using the converter, I tried to estimate the drop in sharpness, picture quality, color, and so on. A drop in sharpness was noticed, and an increase in chromatic aberration. lenswhich was used in pairs. Moreover, the aberrations were especially noticeable when viewing the image directly from the matrix, in the LiveView mode. I considered the loss of sharpness, of course, significant, but not so critical as to refuse to use the converter at all. 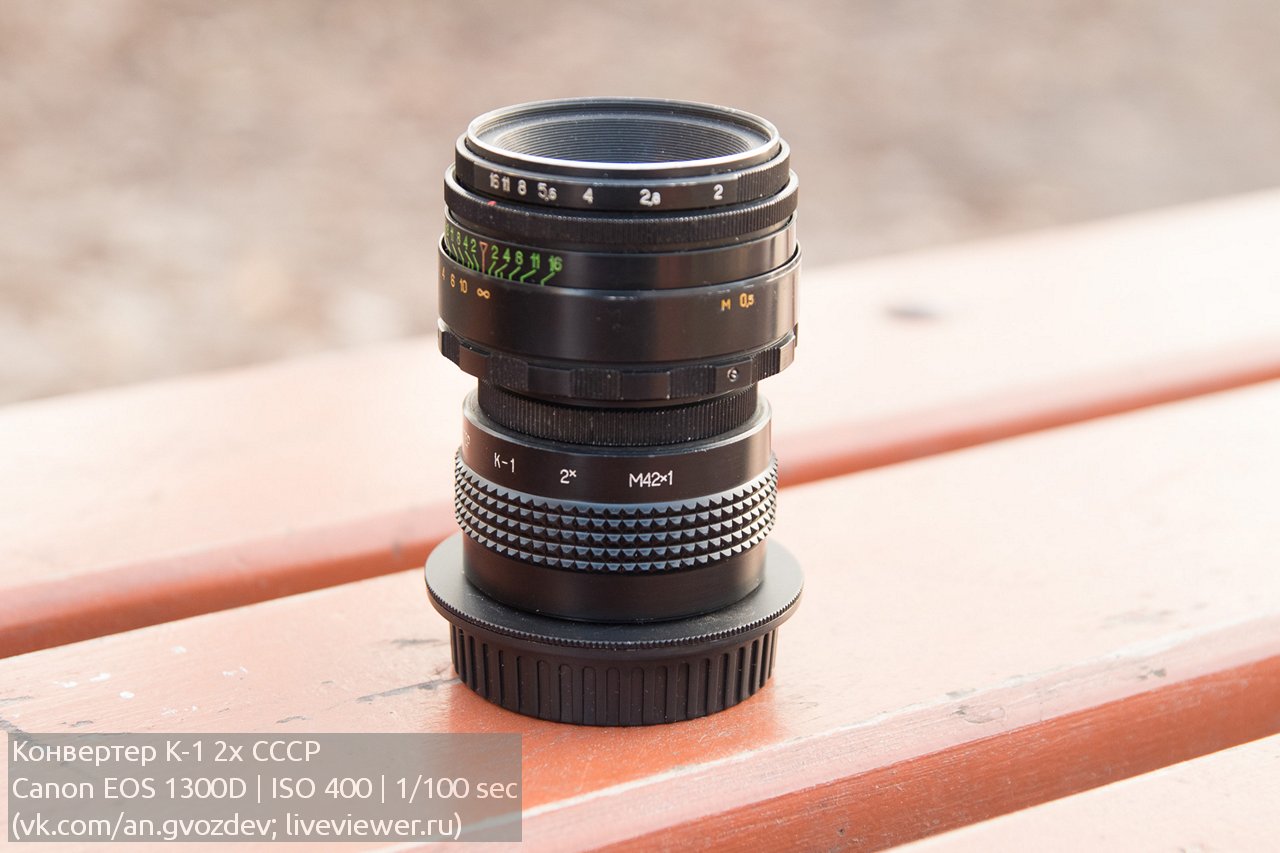 It is also worth noting the peculiarities of using all teleconverters: when using a converter that doubles focal length lens, its relative aperture also decreases, due to lengthening of the system as a whole. That is, when installing lens Jupiter-21M and using it at f / 4, I get the equivalent of f / 8. When Helios 44-2 58mm 1: 2 is installed on the K-1 converter, the maximum aperture becomes 1: 2 rather than 1: 4. When installed on the ZM-5SA, the base has a focal length of 500mm a relative hole fixed to 1: 8, the values ​​will double, so a tripod is required. 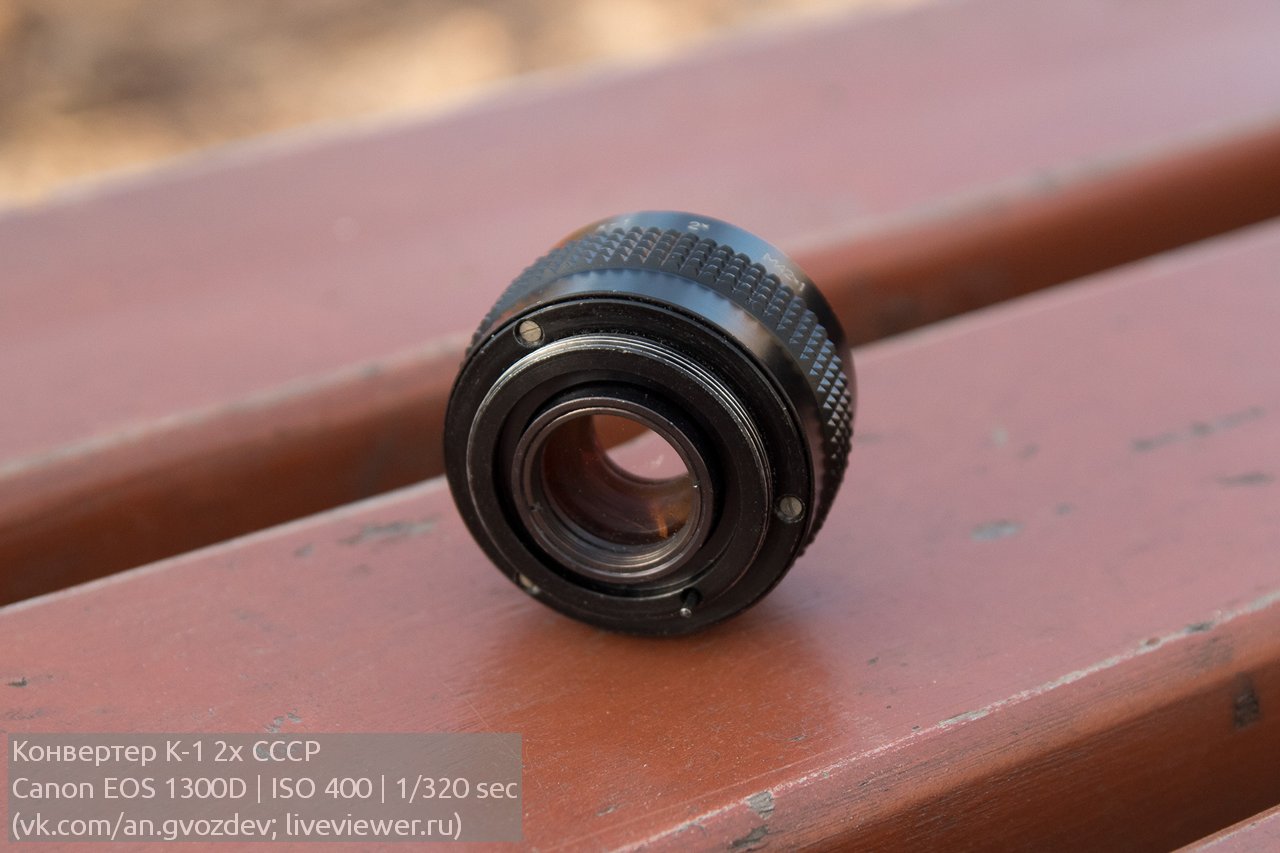 This rule also applies to modern converters with autofocus transmission. Not all DSLRs are capable of processing information correctly when using lenses with f / 4 in the original. The phase sensor simply cannot adequately respond to what is happening. But focusing on Live View works (it is faster to aim by hand).

Of course, not a very good solution for astrophotography, but for lack of the best and with a certain skill, you can take photographs of significantly distant objects. For example, planets, stars. Especially, it turns out well to shoot the Moon when using a converter and a ZM-3SA lens. 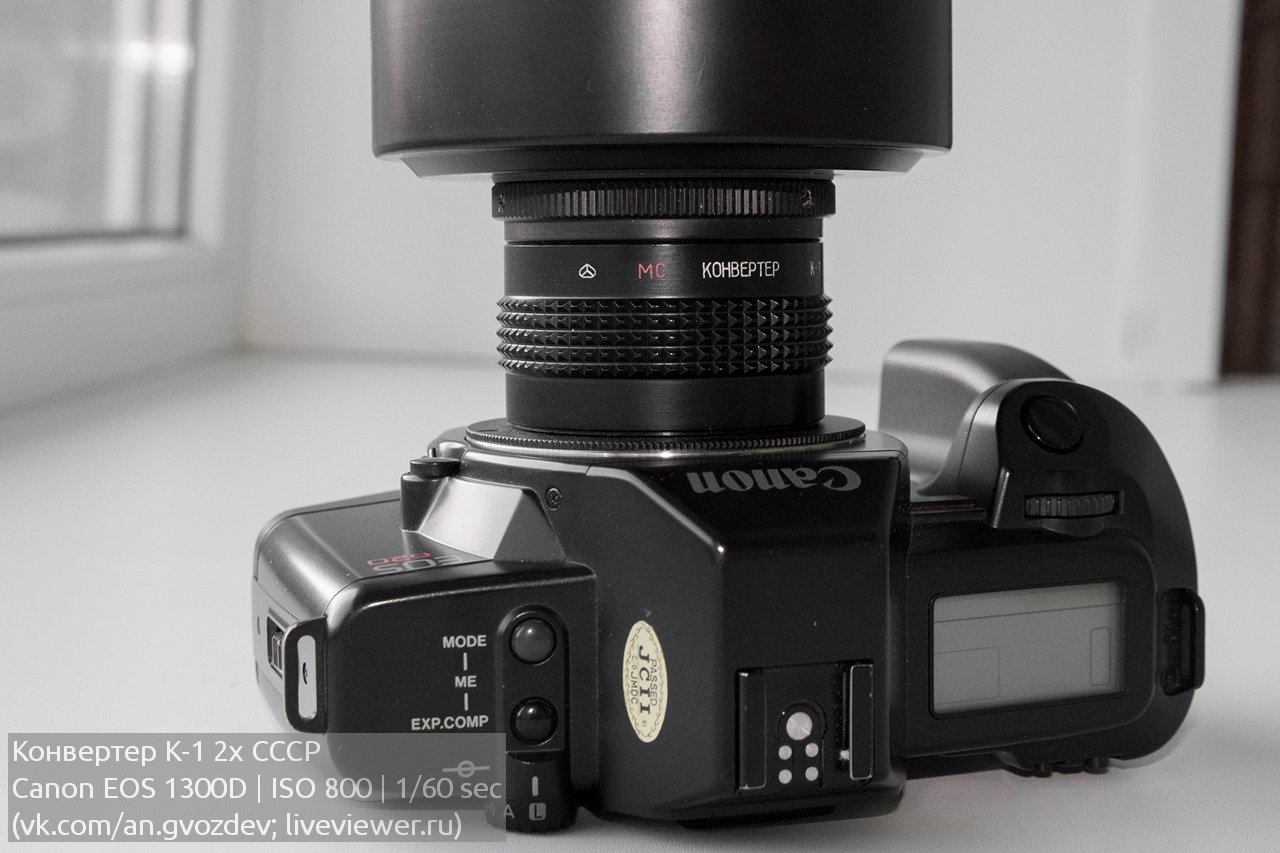 When using less lethal lenses, the result is not very good (photo)

Instead of an epilogue

As for the K-1 converter, I can summarize by the fact that, in general, the piece is interesting and of sufficient quality. There are no special problems with post-processing of images. Apart from a slight drop in sharpness, contrast (although few lenses of that time boast adequate contrast) and CA gain, they can be removed without problems.

Advantages of the K-1 teleconverter:

Cons of the converter

To work on digital cameras, you will need an adapter from the M42x1. The easiest way to install the K-1 converter is on cropped Canon EOS with an EF-s mount, especially considering that adapters without chips on Canon cost mere pennies. 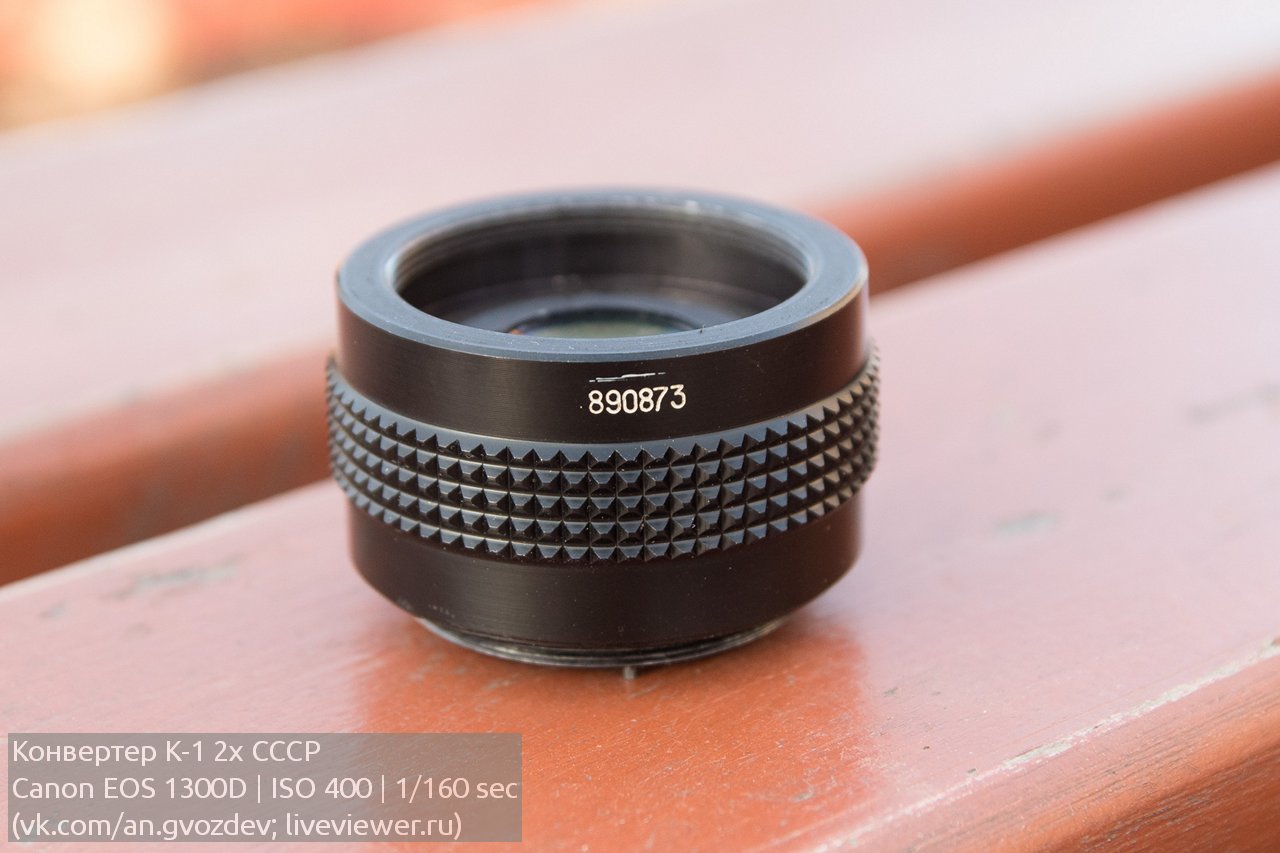 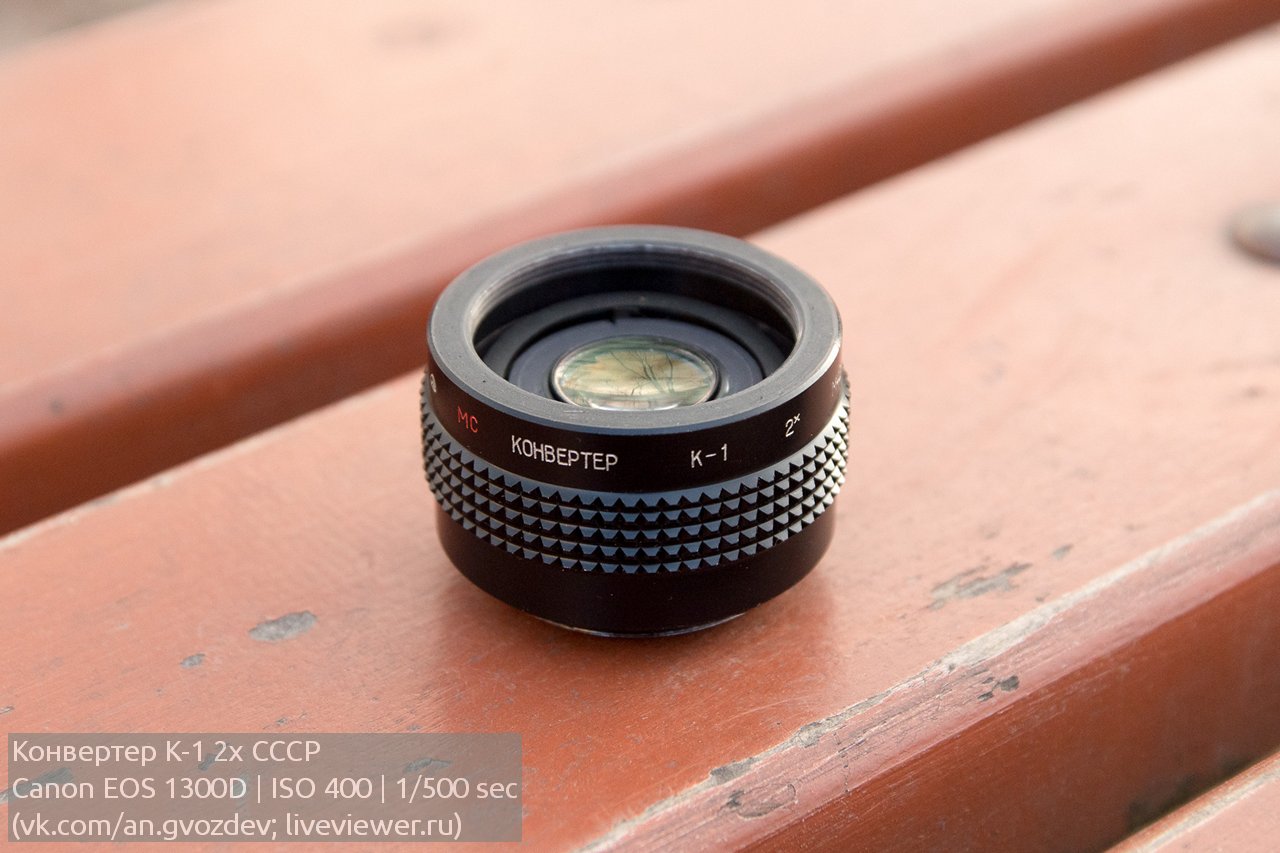 To shoot a test video, Helios 44-2 was used in tandem with a converter

In the gallery you can view and compare various lenses with and without the K-1 converter. Photo with processing, but the edits were made to a minimum.