On July 2, 1896, Alexander Heinrich Rietzschel founded Optische Anstalt A. Hch. Rietzschel in Schwabing, a suburb of Munich. Rietzschel was an optician and precision mechanic from Dresden, studied his profession at Carl Zeiss Jena and worked for some time at Rodenstock and Steinheil. 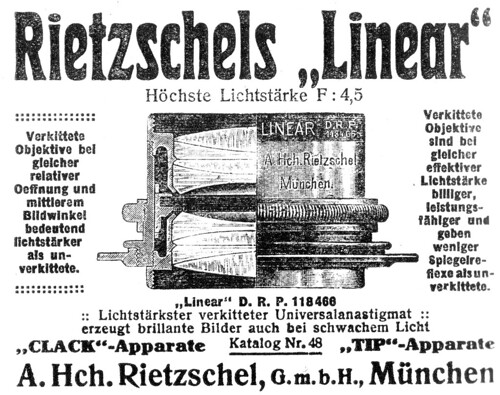 In 1900, Rietzschel released his first camera, the Clack, and went on to produce many subsequent cameras of various types with variations of the name. Rietzschel's cameras included amateur models as well as studio cameras for professionals. In particular, there are many foldable cameras with names that are variations from Tip, which are often simpler models to match one of the Clack cameras.

In 1921, the company was bought by the Bayer Company (of Leverkusen), which transferred it to the filmmaker Agfa in 1925 as part of the merger of the two companies in the IG Farben conglomerate.