Author of many discoveries in the field of optics:

M. M. Rusinov was born into the family of Mikhail Nikolaevich Rusinov, a teacher of mathematics for scientific classes at the St. Petersburg Conservatory. His mother Evdokia Vasilievna Rusinova graduated from the Conservatory in the piano class with A.G. Rubinstein himself. Famous Russian composers N. A. Rimsky-Korsakov and A. K. Glazunov visited the Rusinovs. Mikhail Rusinov inherited a love of music from his mother, and later he composed beautiful waltzes.

In 1917-1920 he studied at a labor school, and in 1921 he entered the Crafts School, which was soon transformed into the Professional School of Precision Mechanics and Optics, then in 1923 into the Technical School, and in 1930 - at LITMO. After college at the age of 18, Rusinov entered LOMO as an optical designer, where he began calculating the optics of submarine periscopes. 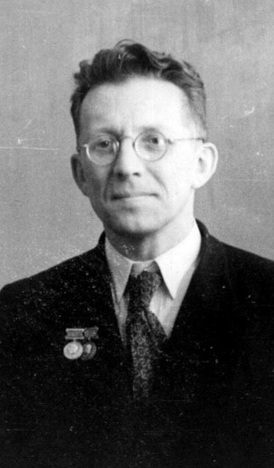 In 1929-1933, MM Rusinov worked as a designer at the All-Union Association of the Optical and Mechanical Industry (VOOMP), simultaneously from 1931 he worked in the system of the Main Directorate of Geodesy and Cartography, and in 1932-1942 - in the Leningrad branch of the Central Scientific Research Institute of Geodesy, Aerial Survey and Cartography (TsNIIGAiK) senior engineer, head of laboratory, senior researcher.

In 1930-1935 he was an associate professor at LITMO and the Leningrad Institute of Engineers of the Civil Air Fleet (LII GVF). In 1938, without defending a thesis, M.M.

In 1941, MM Rusinov, after a brilliant defense of his doctoral dissertation, was awarded the degree of Doctor of Technical Sciences.

During the Great Patriotic War, from 1942 to 1943, he worked as a deputy chief designer at plant number 393 in Krasnogorsk, Moscow region (now the Krasnogorsk plant named after S. A. Zverev). In 1943 - 1944 - professor at the Bauman Moscow State Technical University. In October 1944, he returned to Leningrad as scientific director of the optical-mechanical laboratory of the North-West Aerogeodetic Enterprise.

In 1946 he moved to a permanent job at St. Petersburg State University ITMO.

At the same time, since 1958, he supervised the creation of wide-angle aerial photographic lenses at the Leningrad Optical Laboratory of the FN Krasovsky Central Research Institute of GAiK (Optics and Shelf Survey Department).

MM Rusinov's activities are associated with LITMO - since its foundation in 1930. For more than 40 years he headed one of the departments of the Faculty of Optics, was the scientific director of the Problem Laboratory, which was later transformed into the "Technical Optics" department. Since 1997 - Professor of the Department of Applied and Computer Optics.

Rusinov M.M. is the author of 152 scientific papers (including 18 monographs), more than 320 copyright certificates for inventions and 22 patents (including 7 patents of the Russian Federation). Known for his fundamental works on applied optics, such as

In 1995 the monograph "Composition of non-centered optical systems" was published.

He died on September 29, 2004. He was buried at the Volkovsky Orthodox cemetery in St. Petersburg.