Like many lenses, the Biotar 58mm has a long lineage.

This pedigree goes back to the 1920s when several lens makers tried to improve on the Carl Zeiss Planar design first introduced in 1896. Taylor, Taylor & Hobson in the UK pioneered the Panchro series, while Schneider-Kreuznach independently developed the Xenon lens formula. Biotar was developed by renowned Dr. Willy Walter Merte for Carl Zeiss shortly after the competitor's solutions, all three schemes used a similar formula:

An attempt was made by opticians to improve on the 1896 Planar design, abandoning the strict symmetry approach to compensate for surface curvature radii and refractive indices, achieving additional correction parameters. Asymmetry in this case means that the front group of 3 lenses as a whole has become larger than the group behind the diaphragm. In addition, each of the two outer converging lenses has a larger diameter than the two pairs of inner lenses. Almost all modern fast lenses with medium angle of view (focal length 50-100mm on 35mm cameras) are of double Gauss construction, as is Biotar.

While Zeiss likes to claim that they were the creators of this design, the Biotar was actually based on a Taylor, Taylor & Hobson Ltd. lens. Cooke Series Opic. In 1927, the Biotar lens was released as a 50mm f/1,4 cinematographic lens, and on October 19, 1936 as a 58mm f/2 version for 35mm cameras. The creation of such a fast lens prior to World War II was one of the greatest feats in the history of optics, as it was designed and built without the use of computers. All optical calculations were performed manually by teams of optical technicians.

Near the end of World War II, in February 1945, the US Air Force and the RAF bombed Dresden, setting off a massive firestorm and badly damaging the Zeiss factory in Jena. In 1949, the company returned in the form of the Carl Zeiss Jena and released the Contax S, the world's first 35mm glass prism reflex camera with interchangeable lenses. This camera was the first to use the M42 mount. It took another nine years before the Japanese caught up with them, developing the Nikon F, Canonflex, Pentax Spotmatic and other SLR cameras. 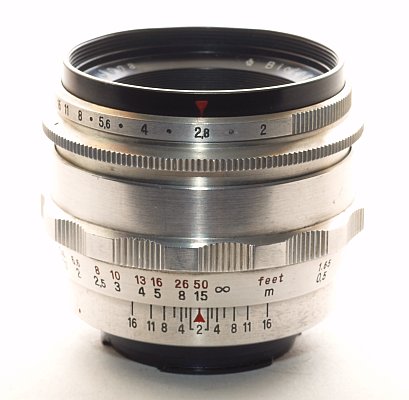 The very first of what we now refer to as a "kit lens" shipped with Contax was the Biotar 58mm f/2 lens. It was a redesigned lens for use on SLR cameras. The Contax S viewfinder was dim, and the aperture of the lens made it possible not only to take photos with an artistic background blur, but also to help with focusing. The focal length of 58 mm provided a 1:1 view on the Contax S focusing screen.

Nine years later, when the Japanese began making SLR cameras, virtually all of them except Nikon, Topcon, and Canon adopted the M42 threaded mount invented for the Contax S. And almost all Japanese lens makers used the Biotar double Gauss design as the basis for their fast apertures. lenses.

Biotar became known, among other things, for its small dimensions, which, according to the manufacturer, were a special sign of quality.

The Soviet 2/58mm Helios-44 lens for Zenit cameras was the most common version of the Biotar, and today it is a great value for money accessory for any digital camera.

There are four main models of the original Biotar, several variations of them and a reproduction released by Oprema Jena. Frames and apertures have changed over the course of lens production, and the biggest differences are in how the aperture works.

The pre-war Biotar 58mm only came with an Exakta mount, and it's a very different lens from later models. It is easily recognizable by its fastening and massive chrome-plated brass construction. The formula of the lens is different from all post-war lenses: the surfaces of the lens elements are curved, and the eight aperture blades are curved so that they form an even aperture circle.

Prior to 1939, the lenses did not have an anti-reflective coating, so they produced low contrast images with flare and ghosting. In 1939, the lens was equipped with an anti-reflective coating and was offered for 25 Reichsmarks in addition to the price of the basic version. At the same time, a mark with a red letter T appeared (which means "Transparentz" or Transparency Layer). This coating, first patented by Alexander Smakula in 1935, is the progenitor of the famous Zeiss Optics T* mark used to this day. Before World War II, Zeiss used whale oil as a lubricant, and it invariably dried out if the lenses weren't serviced.

The hand-operated Biotar 58mm is the smallest and best-made of the various models, and closely resembles the pre-war lens in design and construction. At first it was made from pre-war brass parts with hard chrome or nickel plating, and then from aluminum. Also had a rare black lacquer finish with white markings, which is the most collectible. 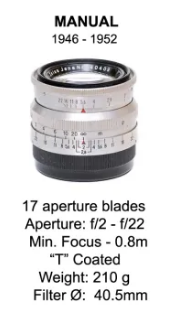 For the first time, Zeiss multi-layer optical coating became a standard option in this lens. It was also the first model with the M42 mount, but the vast majority of lenses were made with the Exakta mount. Very rare specimens exist in the Leica threaded mount (M39). A post-war lens was also produced with an M40 thread (Practiflex), but outwardly it is almost identical to the pre-war version. This version of the lens was produced just after World War II, and is very often accompanied by small bubbles in the glass, which are the result of manufacturing processes. They are small and do not affect the image quality.

The model is most sought after because it features 17 aperture blades that create smooth out-of-focus transitions resulting in creamy smooth bokeh. The bokeh is reminiscent of the Soviet Helios 44 and I'll leave it to others to argue about the differences between the two. Optically, it is very similar to images taken with the Biotar 75mm f/1.5 lens, although not as impressive.

There are two types of lenses. The early model has black stripes on the aperture ring visible from the front and is often referred to as the split ring model. The later model does not have these divisions, so it is fairly easy to tell them apart. Both versions are much larger than the previous release and, thanks to their aluminum construction and knurled focusing ring, are very reminiscent of the Carl Zeiss Jena Flektogon 35mm f/3.5 from the same production period. 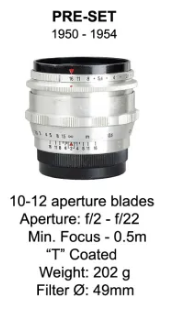 Lenses are equipped with 10 or 12 aperture blades. The model with 12 petals was marked with the "Q1" sign, which stands for "Qualität 1" or "Quality Seal No. 1", and was exported with this sign.

Lenses have an aperture preset ring at the front of the lens. The mechanism allows the photographer to focus at a wide open aperture and then, without taking their eyes off the viewfinder, the ring can be quickly rotated to a "preset" aperture. On a film camera, this worked like this: you measured the exposure with a handheld exposure meter, pressed the ring and turned it to the selected aperture, for example, f / 11. You can then open the aperture to f/2 to get in focus, and then quickly turn the ring to close the aperture down to the preselected aperture. With our modern digital cameras, this seems counterintuitive, since with at least one "Auto" function (shutter speed, aperture or ISO) turned on, the picture will be equally bright on the display or viewfinder. Of course, provided that exposure simulation is enabled.

The first ring is the limiter and is set to the desired aperture value. The other is connected to the diaphragm. You set the required value with the dial ring and switch between full opening and closing by turning the ring from one limit point to another. Very simple, but not as simple as an auto iris system, which is why these lenses were an anachronism even before they hit the market. However, the system worked and many photographers have been using it for years. 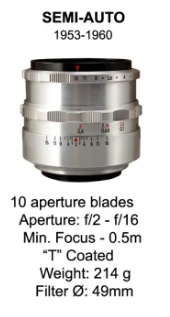 This is the most common form of the Carl Zeiss Jena Biotar 58mm f/2, but unfortunately it is the least suitable for adaptation to digital cameras. It is easily recognizable by the small aperture pin protruding from the back of the lens and the wavy aperture ring. The pin controls the aperture mechanism, which allowed the aperture to close when the shutter was released.

Such a system allowed the photographer to focus at full aperture and then automatically close it using the camera mechanism before opening the shutter. But this will only work on a properly equipped film camera. Compared to the previous model, the aperture has been reduced from f/22 to f/16, and it has only ten aperture blades. This lens produces the sharpest and most colorful images since it had the latest version of the Zeiss T coating, but the bokeh is not as pleasing as previous versions. For use on modern cameras without a diaphragm pusher, you can try to lock the pin and work like with a regular manual lens. 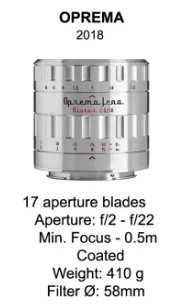 Oprema-Jena released a state-of-the-art Biotar 58mm f/2 lens in 2018. Dr. Wolf Dieter Prenzel was responsible for the scheme, and Andre de Winter was responsible for the mechanics. The lens is manufactured by Kenko-Tokina in Japan. I've included it here because, although it's not a classic lens, it's fully compliant with the Biotar formula.