Already in the early sixties, from time to time, notes began to appear on the pages of many foreign photo magazines that a “mirror Leica” was being prepared at the Wetzlar plant. This information aroused great interest, since there were already quite a few 35-mm single-lens reflex cameras on the world market, such as Ekzakta, Praktika, Kontax-D and Praktina from the GDR, Asahi-Pentax , "Nikon-F", "Canon", "Topkon", "Minolta", "Yashika" from Japan, etc. But "Ernst Leitz" still firmly adhered to its "rangefinder" traditions. Finally, in January 1965, the "mirror" Leica - "Leukaflex" - was released.

It was a camera with a rigidly mounted pentaprism, a built-in exposure meter, and interchangeable optics. The camera differed sharply from similar SLR cameras by an extremely bright image in the viewfinder, which was approximately 8 times lighter than that of the then-produced Asahi-Pentax. But focusing could be carried out only on the central spot, which contained about 50 sq. mm more than II thousand microprisms. Exposure metering and focusing were carried out at a fully open aperture. Correct exposure was achieved by aligning the two arrows visible in the viewfinder, one of which occupies a specific position depending on the illumination of the object, and the other is set in motion by the speed knob, aperture ring or film sensitivity setting ring. The speed head is located on the same axis with the release button and cocking trigger, and the sensitivity ring is coaxial with the rewind head.

The light meter (with photoresistor) had an angle of view corresponding to a lens with a focal length of 90 mm, and its sensitivity range extended from 6,3 to 50 apostilles. The Leicaflex sensitivity ring is graduated from 000 to 10 DIN and from 39 to 8 ASA (approximately from 6500 to 8 GOST units). Camera shutter speeds from 5600 to 1/1 s, which are visible in the viewfinder. The head of speeds can be installed in any intermediate position.

Synchronizes with electronic flash at speeds up to 1/100 sec. The Leicaflex return mirror is almost vibration-free for more handheld shooting. Simultaneously with Leukaflex, four specially designed lenses appeared: Elmarit-R 2,8 / 35, Summikron-R 2/50. Elma-rit-R 2,8 / 90 and Elmarit-R 2,8 / 135. All of them were equipped with an automatic diaphragm and had a uniform distance between the focusing ring and the aperture ring.

In the same year, Leukaflex received its fifth lens - the super-wide-angle Super-Angulon-R 3,4 / 21 with a diagonal angle of view of 92 °. The rear component of the optical unit of this lens went so deep into the body of the camera. that it could only be used by turning off the mirror movement mechanism. The possibility of such a shutdown with the simultaneous fixing of the mirror in the upper position was provided in advance in "Leykaflex". In this case, the construction of the frame was carried out through a special additional viewfinder (the same one that is used on "Leikas" of the M series with similar lenses). and focusing - by footage. It is clear that Leukaflex with Super-Angulon-R 3,4 / 21 ceased to be a genuine DSLR, and therefore the aperture of this lens was not automatic.

In 1968 Leikaflex SL appeared. Its main difference is the measurement of brightness through the lens. The metering angle, unlike the previous model, became variable, which gave the new camera undeniable advantages. The center spot in the viewfinder field is the brightness metering area, and focusing is possible over the entire field. Since the brightness is measured only by the central spot, the actual angle of the exposure meter is always very small (for example, with a 50 mm lens it is 7,7 °, and with 180 mm it is only 2,2 °). This greatly improves the accuracy of exposure determination.

The camera also received a button for preliminary estimation of the depth of field (tutor) and a new take-up coil for easier charging.
For "Leukaflex SL" an attached electric motor was released, which made it possible to shoot at a speed of up to 1-4 frames per second. The motor is powered by a block of 10 one and a half volt batteries or, which is preferable, nickel-cadmium batteries of the same size.

The version of the camera for working with a motor was named Leikaflex SL Mot. In the same year, a special lens for macro photography "Macro-Elmar-R" 4/100 and a focusing mech were released, as well as an ultra-wide-angle direct sight "Super-Angulon-R" 4/21. When working with the latter, an additional viewfinder is not needed, and focusing is done in the usual way.

1970 was the most fruitful year for Leikaflex: eight new lenses were released. This is "Telit-R" 6,8 / 400 - its focusing is done with a simple forward movement, without the usual rotation of the ring; wide-angle Elmarit-R 2,8 / 28 and Summikron-R 2/35. "PA-Kurtagoi-R" 4/35 is a lens primarily for architectural photography with the ability to correct perspective distortions. By rotating a special ring, the lens can be displaced along the plane of the film relative to the normal symmetrical position at a distance of up to 7 mm in any direction. Were released "Summilux-R" 1,4 / 50, "Summikron-R" 2/90, "Telit-R" 4/250 and "Telit-S" 6,3 / 800, very bulky and heavy (9 kg 250 d), which the company recommends to use only on a special two-support tripod. In 1971 Leikaflex received another telephoto lens - Telit-R 6,8 / 560, which has a progressive focusing mechanism.

1972 marked the release of "Macro-Elmarit" 2,8 / 60. This is, so to speak, an extremely corrected lens for shooting in the range of distances from oo to 1: 1 scale; in terms of its optical qualities, it is one of the best in the world among such lenses. Many professional photographers successfully use it as a "standard", preferring "Summikron-R" 2/80 and "Summilux-R" 1,4 / 50, so optically it is better.

In 1974, Leikaflex SL-2 appeared (with the SL-2 Mot variant). The shape of its body has been slightly changed, it has become more comfortable. The so-called "hot shoe" - a sync contact for cordless flashes, appeared on the sled for devices. The eyepiece has become flatter, which delighted photographers wearing glasses - the camera is convenient to use with glasses too.

A rangefinder magnifier appeared in the middle of the central spot. This greatly facilitates the use of short-throw lenses, and in itself it is so invisible that it does not interfere at all when aiming is done without using it, on frosted glass or a ring microster.

In the viewfinder, in addition to the shutter speed, the aperture value is also read. Thus, all shooting parameters can be controlled without taking your eyes off the eyepiece.
The exposure meter sensitivity is increased by 8 times.

Introduced internal illumination of the extreme area of ​​movement of the exposure meter arrows. This allows you to confidently use it under very unfavorable light conditions, when the arrows appear against the background of a very dark part of the frame and are simply not visible, for example, in some cases of theatrical shooting. For this device, a special second battery is inserted into the camera (on the front wall, under the sync contacts). In addition, Leukaflex SL-2 has become more “frost-resistant”.

In 1974, three new lenses were released: "Fishai-Elmarit-R" 2,8 / 16 - "fisheye" operating on a full frame (diagonal angle of view 180 °). The closer the object is to the camera and the closer these straight lines are to the edges of the frame, this lens “rounds” the straight lines of the object; wide-angle "Elmarit-R" 2.8 / 24, focusing from 30 cm. For additional correction at short distances, it has a "floating element" in the design of the optical unit; zoom "Vario-Elmarit-R" 4,5 / 80—200, the unit of which consists of 14 lenses. It differs from many existing zoom lenses in that the change in focal length and focusing are carried out by means of one ring: the first - by translational movement, the second - by rotation. And besides, this zoom differs from others in good image quality at all focal lengths.

In November 1975, two more lenses were released. "Apo-Telit-R" 3,4 / 180 (its weight is only 750 g) is intended, due to its wide spectral capabilities, mainly for scientific purposes. In particular, it does not require correction for infrared photography. And the second new lens is the ultra-wide-angle Elmarit-R 2,8 / 19. Its angle of view on the diagonal of the frame is 95,7 °, and at the same time, according to the company, "no distortion!"

This is, in brief, the history of the release of everything related to the Leukaflex camera.

As for the operational qualities of Leikaflex, the published opinions of foreign professionals differ. Some argue that this camera is "almost like Leica", others - that it is "even better." All agree on one thing: the camera itself and what is produced for it are fabulously expensive in any country in the world. 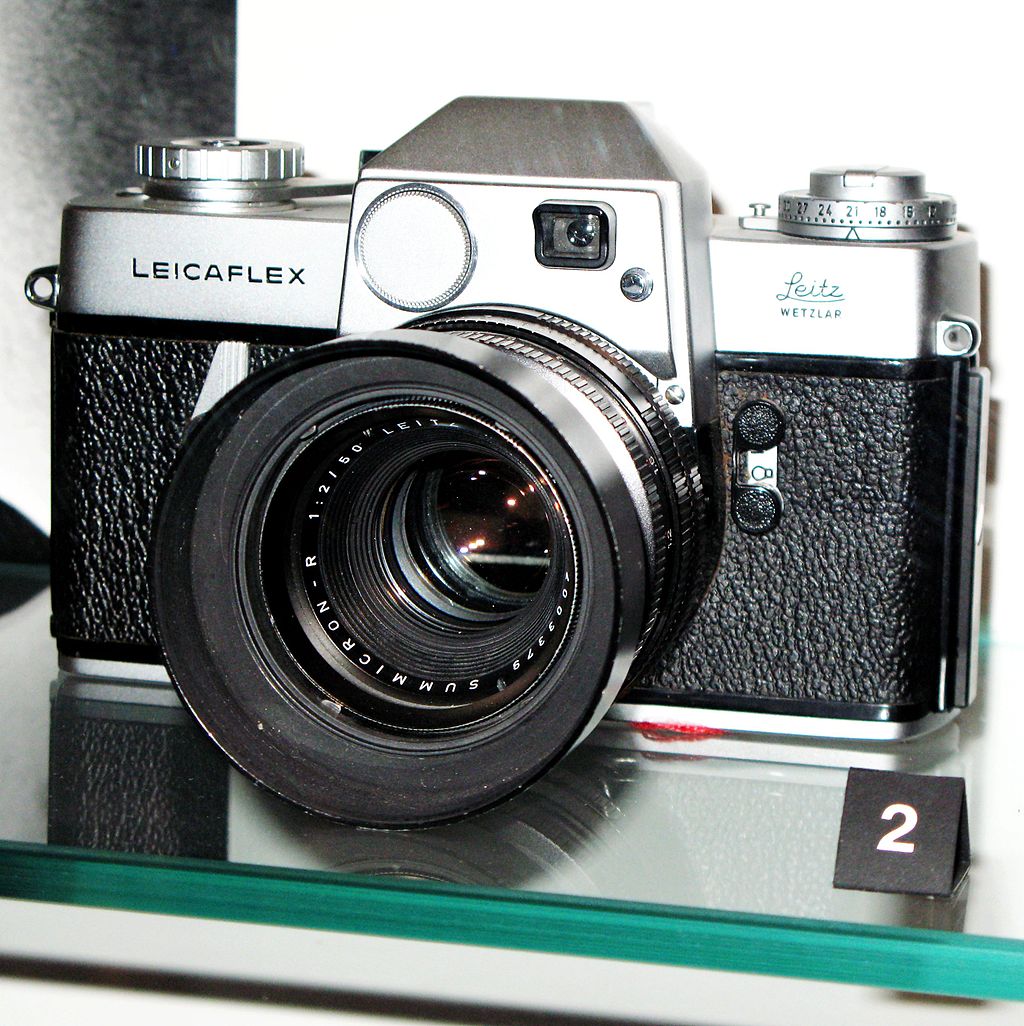