Magic Lantern is an alternative firmware that enhances the functionality of Canon SLR cameras. This article describes all the menu items of this program.At the same time, it absolutely does not interfere with the operation of the camera and it can be removed without any problems. The first experiments with the firmware of Canon cameras were carried out back in 2003, when the result of these actions arose the opportunity to reflash Canon EOS 300D unlocking many of the Canon 10D features. Among these features were range expansion ISO, mirror lock, flash power control, and others. They were, to say, sorely lacking in the Canon 300D. Especially, blocking the mirror before the descent shutter and power adjustment of the built-in flash. It's a pity, range shutter operation cannot be extended by flashing.

Great theme - descent shutter by timer for shooting time laps, zebra when focusing, mileage view shutter and other functions. The instructions and description of the functions of the Magic Lantern menu I have given in this article below.

The list is incomplete and depends on the camera model. I have highlighted functions useful for me in italics. For shooting at long exposure, it is very convenient to have a built-in function in the camera, than to buy an intervalometer (and they cost decently), or to carry a wired remote control with you and press the button for a long time. 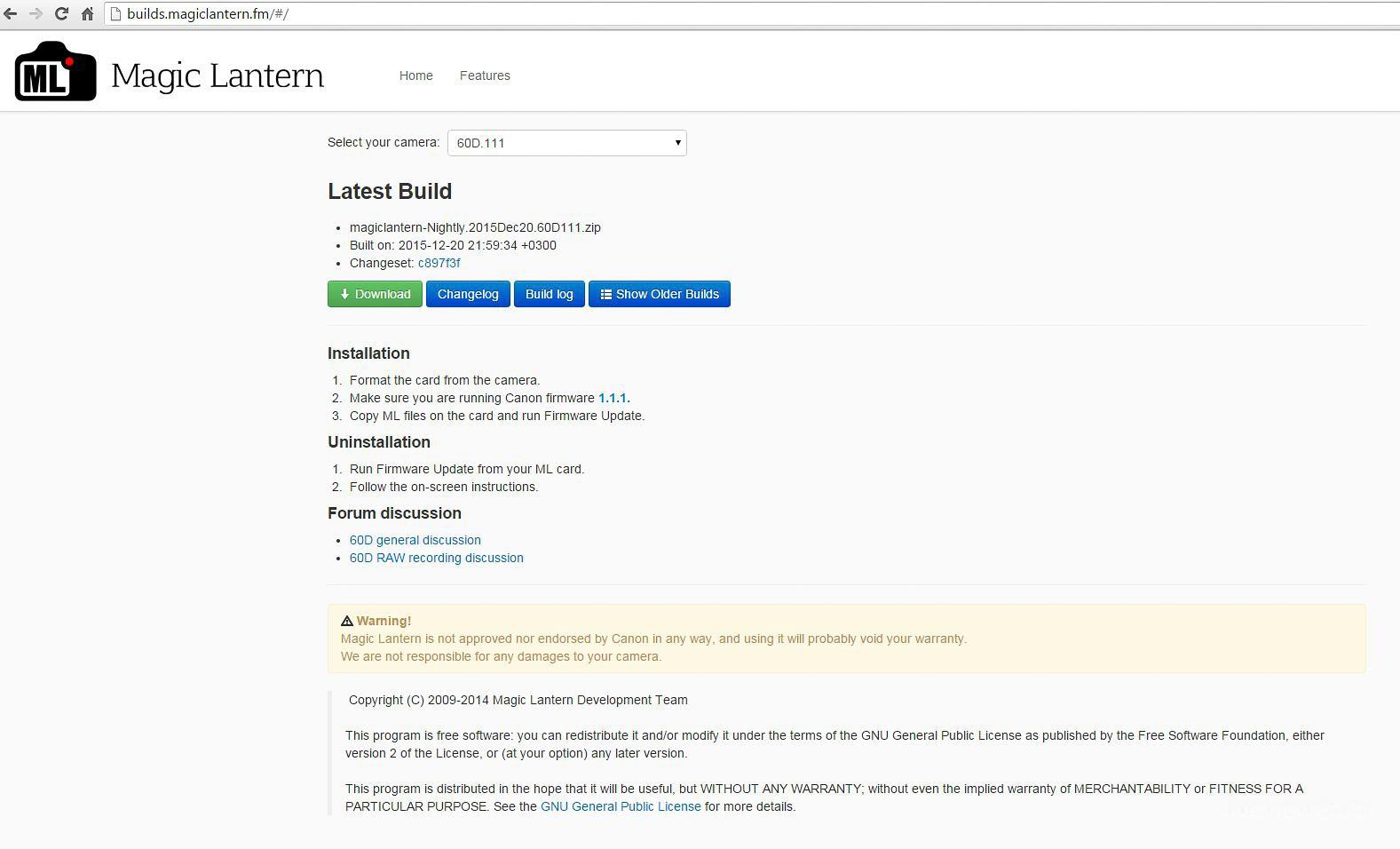 You do all this, by the way, at your own peril and risk. Therefore, the minimum required for flashing is a fully charged battery of the camera.

In Canon 60D, the button for deleting photos is responsible for calling the Magic Lantern menu, and in LiveView mode - Info. Variations are possible on other cameras. The interface is a text menu made in the form of system fonts on a black background. The pictograms at the top of the menu show the main sections. 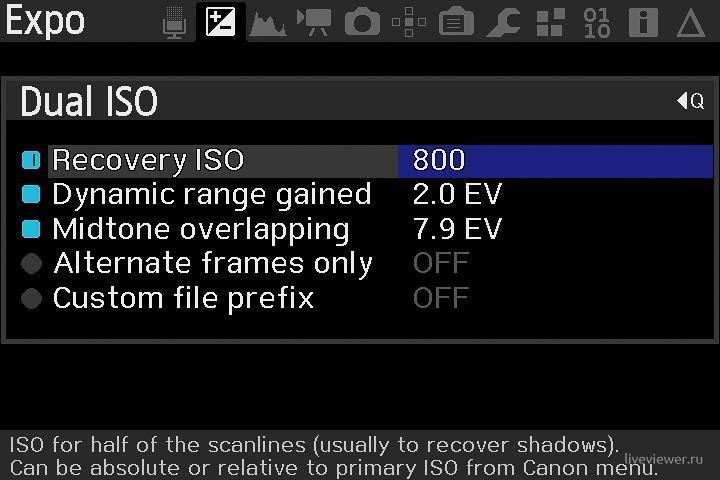 Previously, on the ML download page, you could select either fresh compilations of the program (nightly builds), but not tested, or the so-called Stable (stable) releases. Currently, only Nightly Builds are available for download by default.

Here and below are the Magic Lantern settings in Russian. Now let's start describing the sections and settings in them. 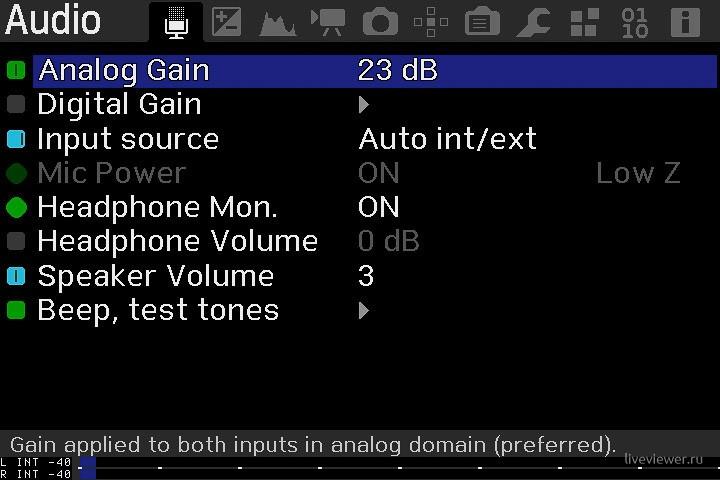 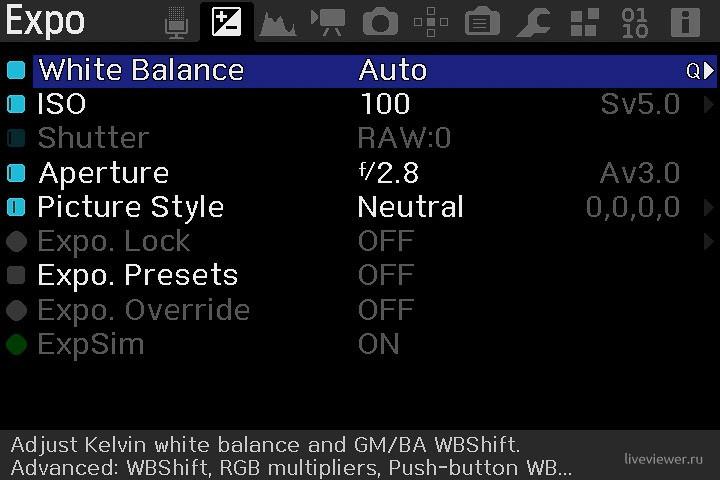 There are the following items here: 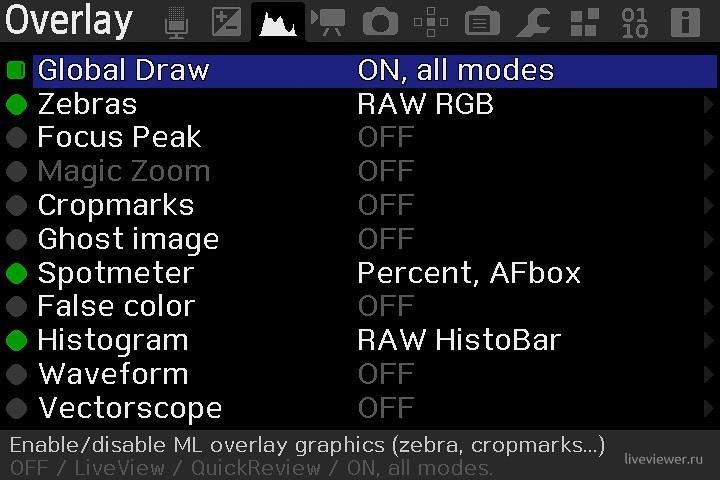 Adjust the different blend modes of Magic Lantern. There are the following sub-items here: 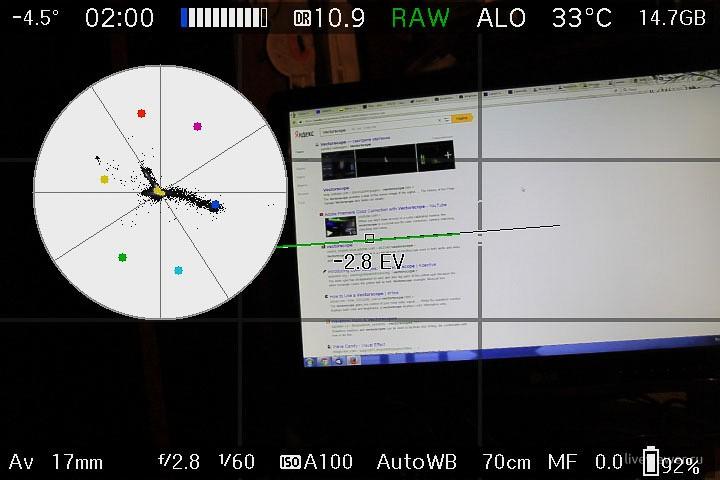 In this section, you can change the video bitrate, and some other settings: 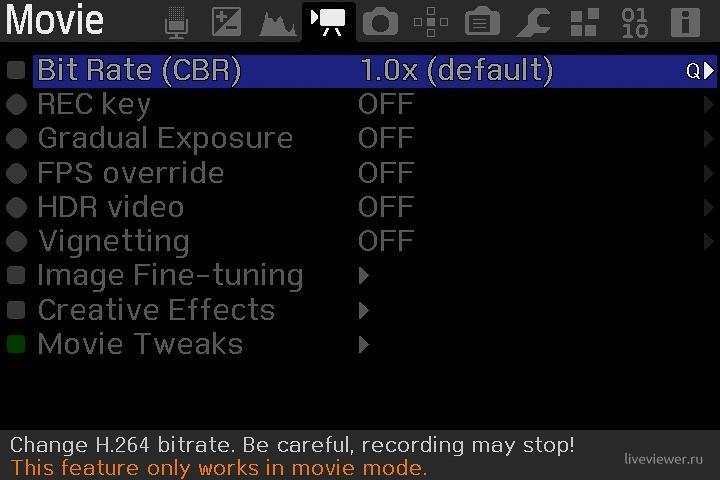 Has the following subparagraphs: 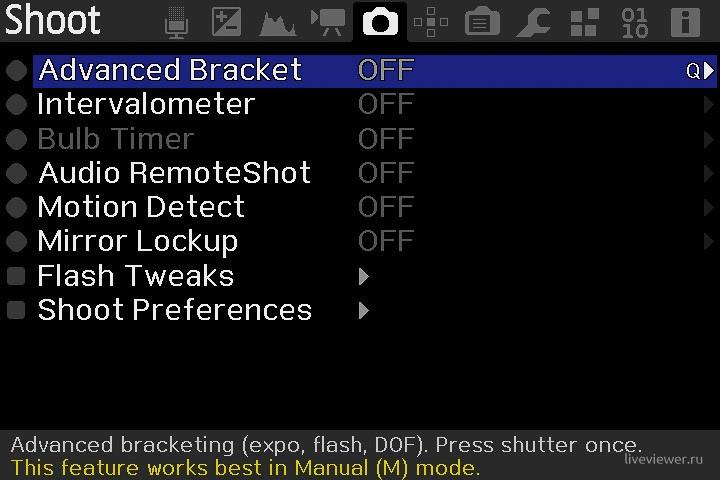 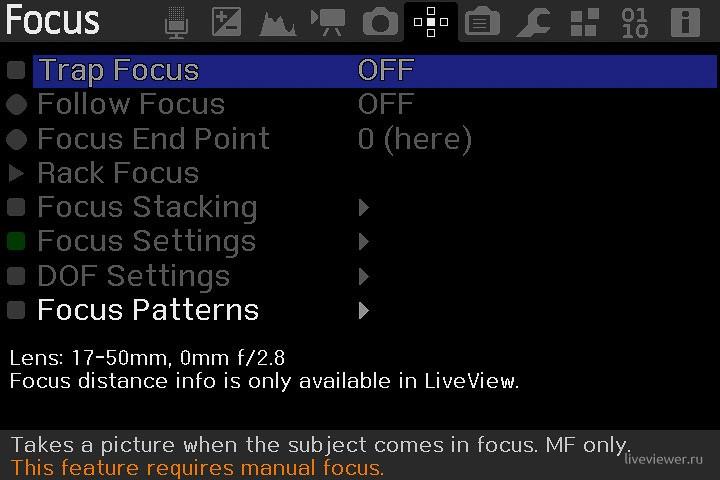 Various Magic Lantern settings are hidden here. Such as displaying configuration files, previewing images, LiveView zoom, square focus area, enabling warning of incorrect settings, enabling power saving in LV mode, and menu settings. Nothing complicated so that you can focus on this. 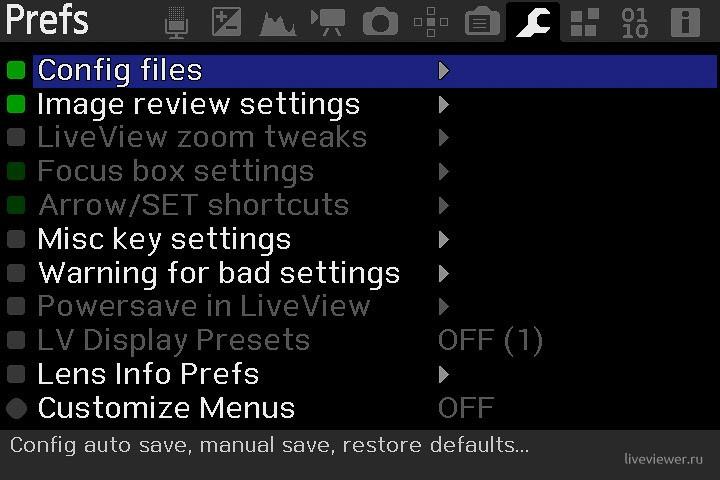 Section where you can connect additional modules preloaded with ML. There is even a toy and a file manager. This section is useful if you want to activate something like Dual mode. ISO or RAW video, which are disabled by default. 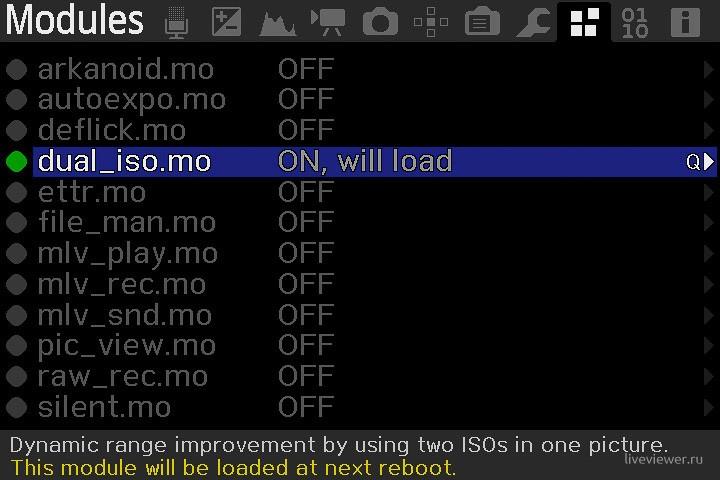 The technical mode of the Magic Lantern settings, in which you can view both information from the camera sensors, about the mileage shutter, matrix temperature, battery charge, and perform stress tests of iron for failures. 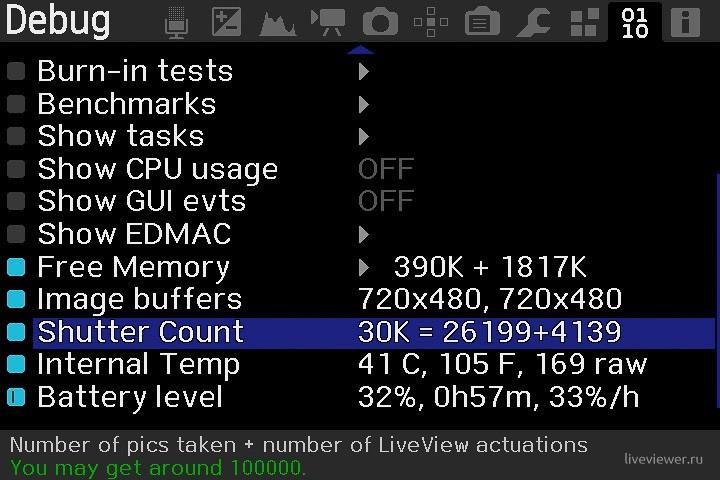 Screenshots of the camera menu for this entry, and some others on the portal, were taken from this particular menu. The format of the saved file is .PPM, it opens in graphic editors without problems, but the standard Windows photo viewer does not understand the Magic Lantern screenshot format.

A section that reports on hotkeys for controlling Magic Lantern and contains information about the firmware and its build. 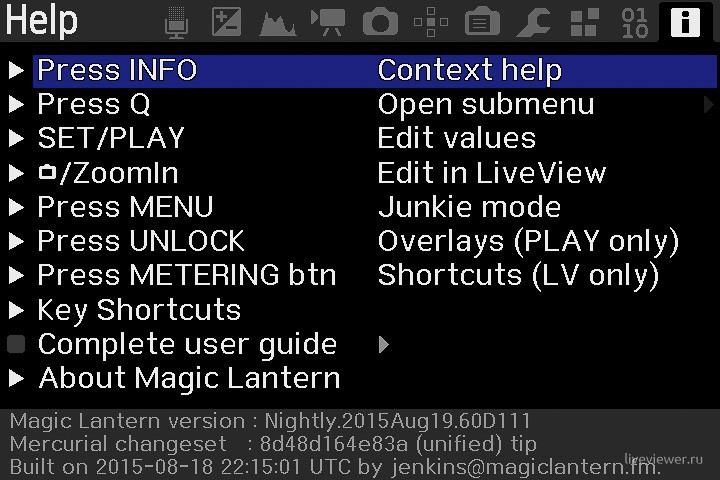 Should I install Magic Lantern?

The answer here is up to you. Considering that a lot of things are missing on cheaper models of cameras (an intervalometer, for example, or additional focus display settings), then advanced owners are simply a must-have. Thanks to the developers of this add-on, the effect of Canon's marketing policy is smoothed out - there is no point in overpaying for new functions if you already have a camera suitable for your requirements.

I personally have not yet regretted nirazu that I contacted ML. So are my comrades.

7 comments on “Magic Lantern. All 11 menu items in detail."