Yongnuo 50mm f / 1.8 review. The Chinese company Yongnuo got to the cloning of Canon lenses, having produced flash units and lighting equipment before that. As stated earlier, the work was carried out not only in terms of creating lens from this review, but also some others. Despite the apparent similarities, Canon did not respond to a request for the legal side of this approach. The test includes not only optical, but also a comparison of the internal layout of the original Canon 50mm f1.8 II and Yongnuo 50mm f1.8 lenses. 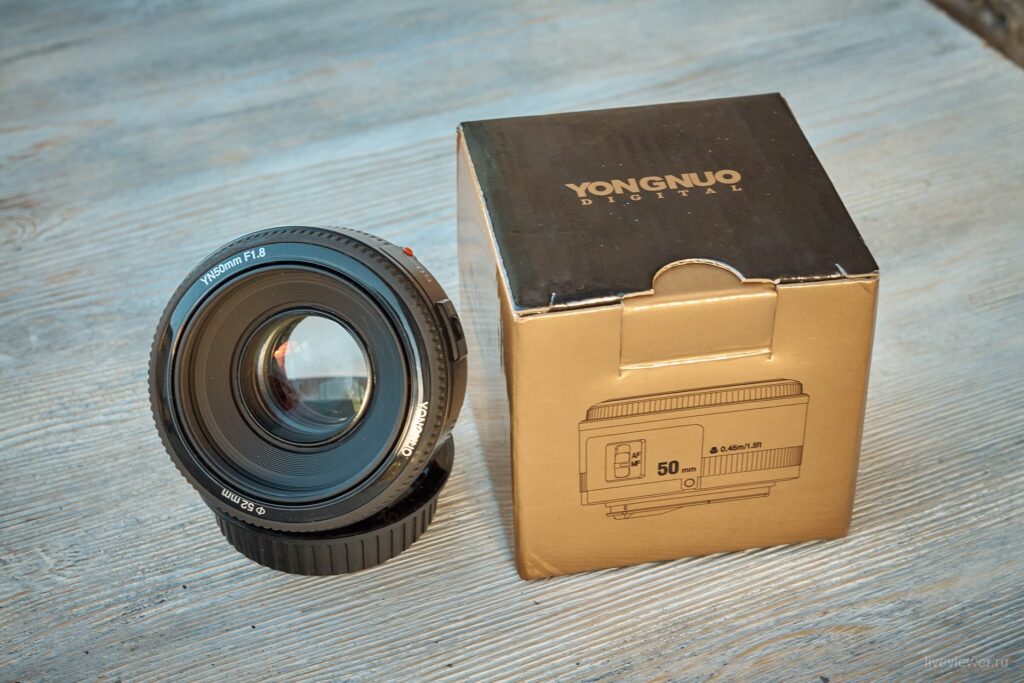 UPD: Several years after the release of the YN 50mm f / 1.8 lens, Yongnuo has released many lens models for Canon and Nikon. At the same time, all of them, one way or another, externally and internally, are copies of certain models of lenses of the flagships of photography.

The Yongnuo 50mm f/1.8 has an interesting feature - although the optical design is similar to the original from Canon, nevertheless, the lens was designed from scratch. Compare parameters - focal length Chinese 50mm (plus or minus 0,37), diaphragm f / 1.86; Canon - 51,5mm f / 1.82. Canon is designed as a lightweight and cheap alternative to its "adult brothers", Yongnuo is the same plastic, and even cheaper. 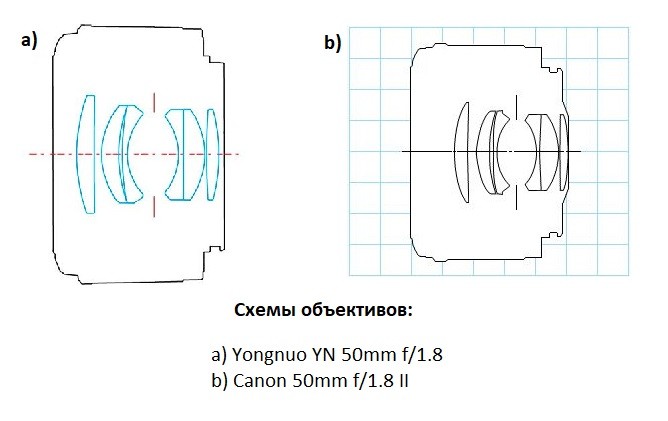 As for the autofocus operation with YN 50mm f / 1.8Canon cameras are doing much better than the native Canon EF 50mm f / 1.8 II. The scrap rate reaches 10%, which is very good for glass of this level. For comparison, Canon's defect rate reaches 50%, the focus is "walking", it often turns out to be "overshoot", then "undershoot", which is very bad. Yongnuo suffers from this sore to a much lesser extent. The autofocus drive is built on the same principle as implemented in the Canon EF 50mm f / 1.8 II. Sores, and features of operation, in fact, are identical. For example, both lenses make the same noise when focusing, the same smear by, the same backlash of the focusing rings. The rigid connection between the focusing ring and the drive is also copied in full. No fine-tuning, no smoothness of the focuser ring. Cheap and cheerful. 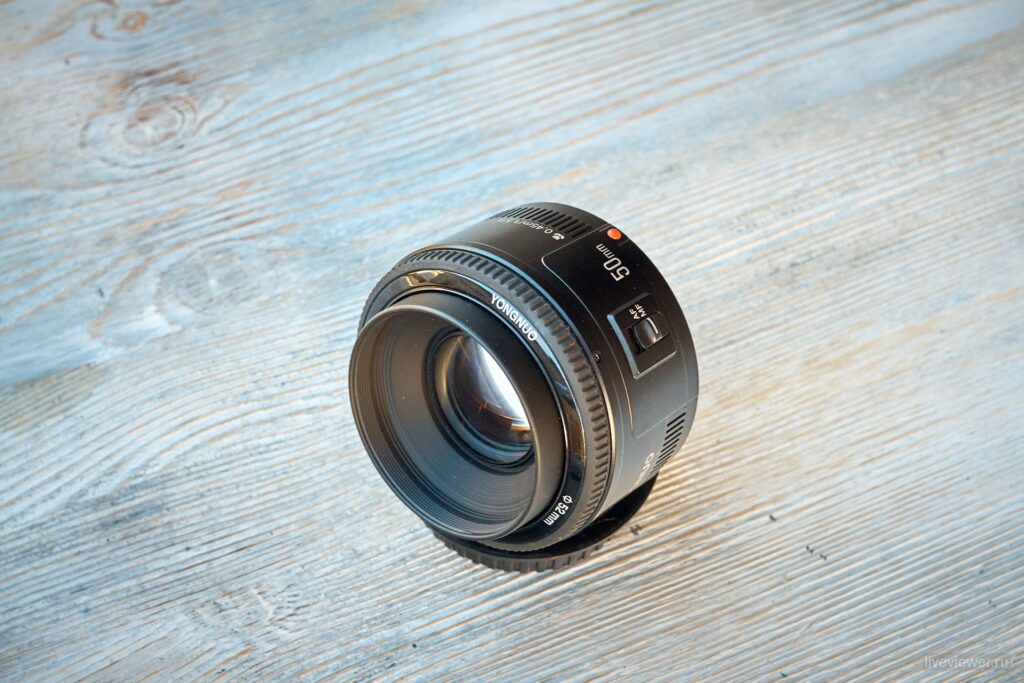 The problem with unstable focus isthat the lenses use stepper motors with very large gear teeth. Because of this, the lens may not get into focus, and also have a spread in the accuracy of the hit.

The lens diaphragm is electronic, controlled from the camera. Works noisy, as well as autofocus on this lens.

The image quality of the lens is inferior to that of Canon. In order to get an acceptable picture, it makes sense to cover the aperture to f / 4-5.6. At open values, the lens produces the following: 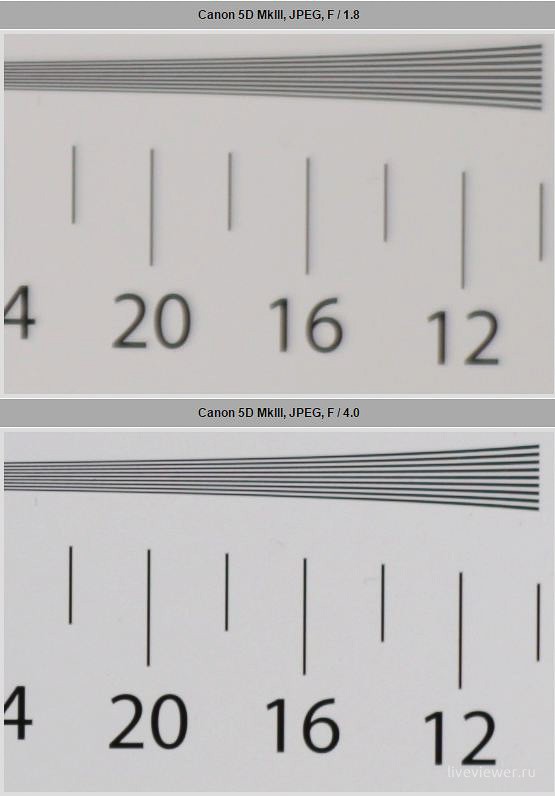 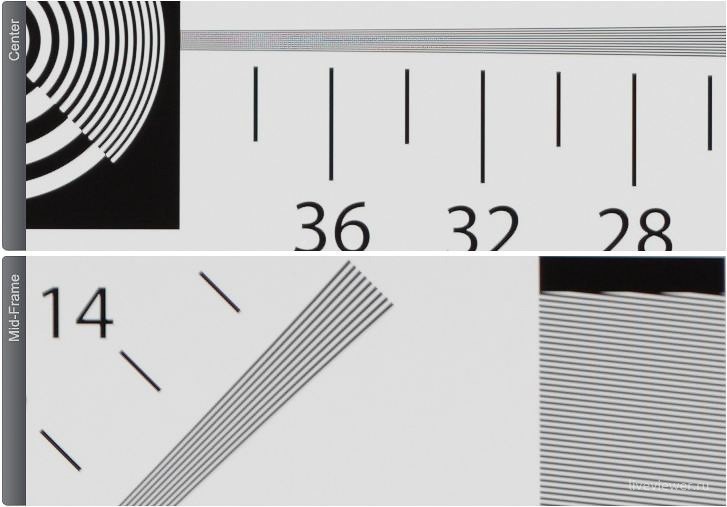 Chromatic aberration in lens is practically absent, and the spherical one is at the level of its more expensive "brother" from Canon. 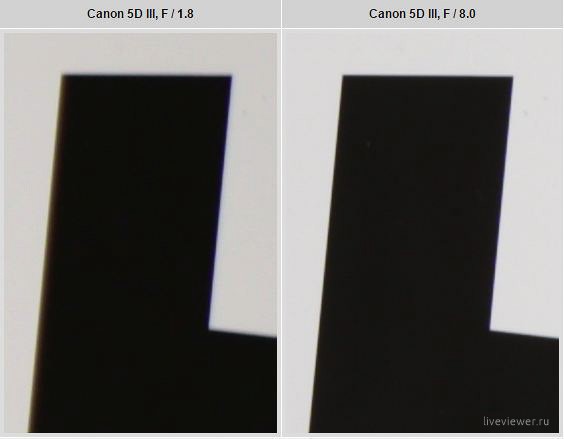 Distortion in lens also much less, but even these ratios can be neglected, since this practically does not affect the picture. Comatic aberration towards the edges of the frame reaches catastrophic proportions, and will be visible in the imageas a large loss of sharpness at the corners of the frame. 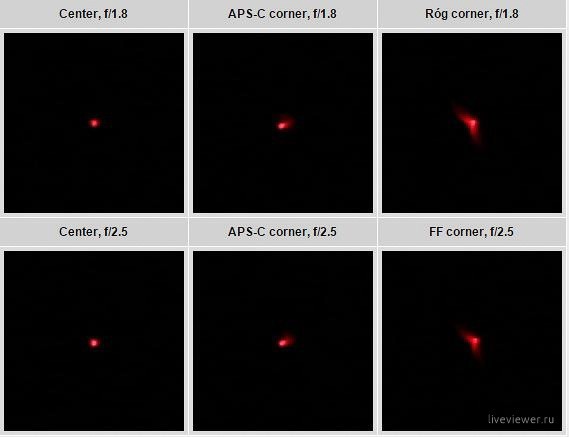 Vignetting is high and the out-of-focus light circles will appear very truncated towards the edge of the frame. 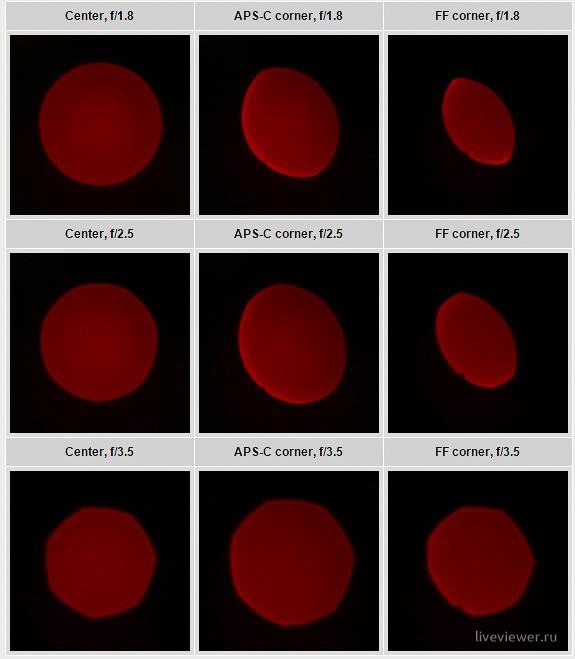 Vignetting is generally the same as Canon's, and at open aperture on a full-frame camera is about 61% loss in the corners of the image (-2,7 EV). 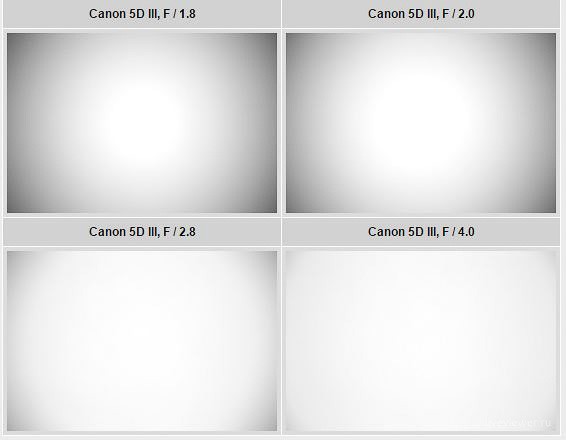 Not completely eliminated even at f / 4, as you can see.

In comparison with the Canon strip, Yongnuo, with the general stylization, still has some differences - a rubberized focusing ring, the focusing switch is located slightly to the left, the fastening screws are visible on the body. The lens itself is even slightly larger. It is assembled well, does not creak or play. The lens diameter varies slightly. 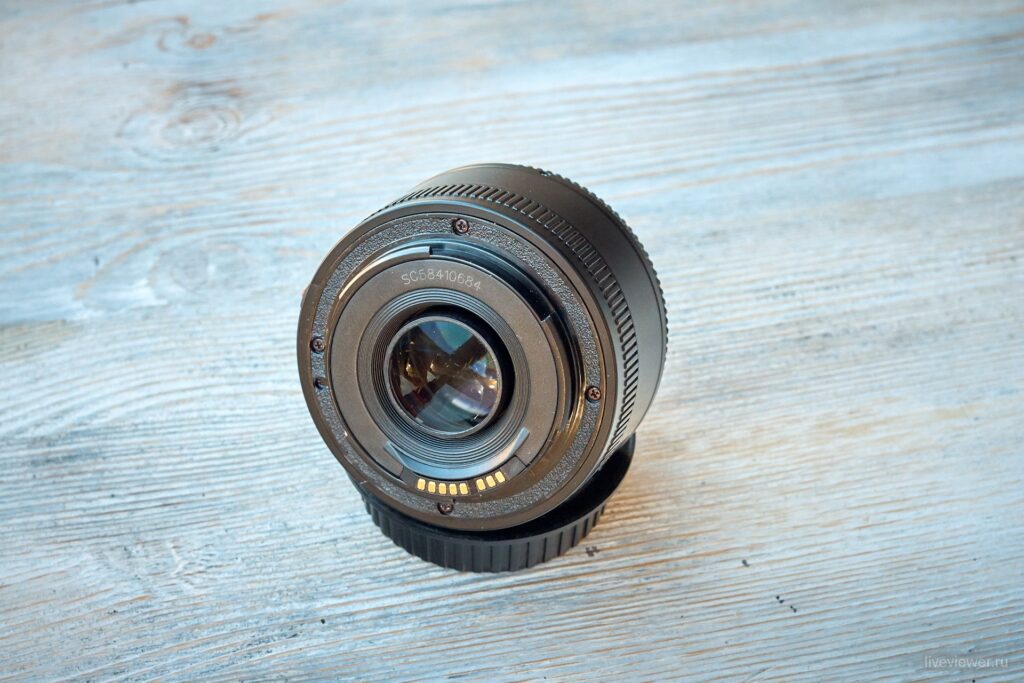 The inside of the lens is simpler and easier to disassemble. The electronics board is accessible immediately after removing the bayonet mount. In the case of a Canon lens, you have to remove the body completely. 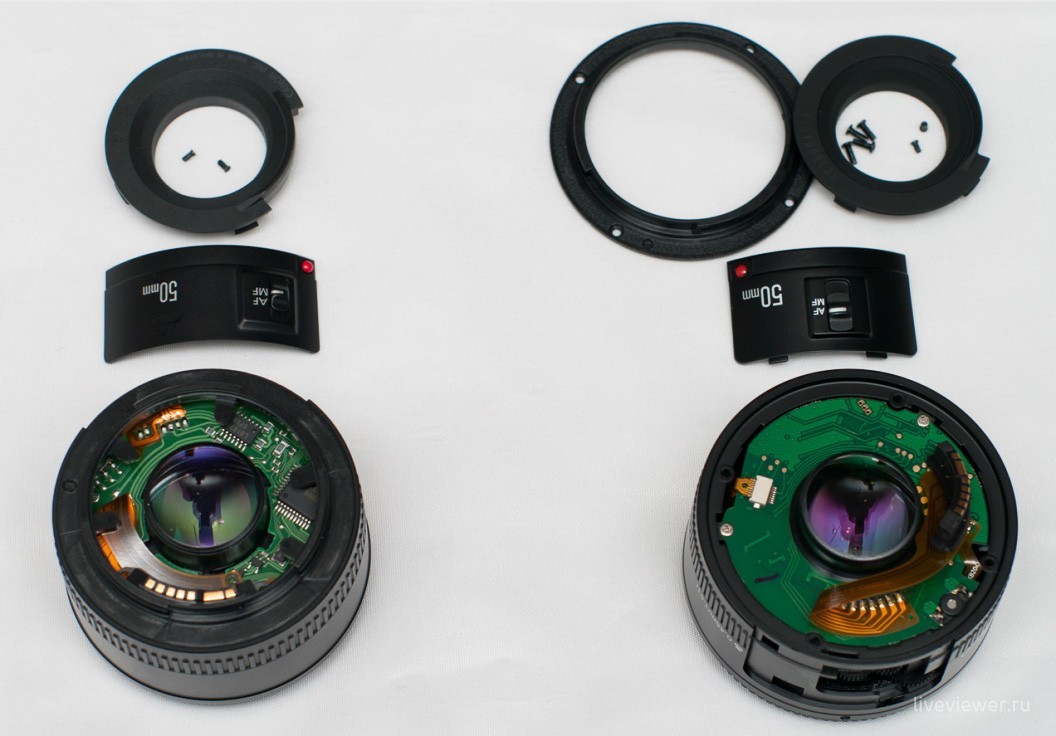 The electronics boards themselves are, of course, different. The cover with the focus switch for Canon sits on double-sided tape, for the Chinese it is fastened with latches. The potential maintainability is quite high. Canon has a missing metal ring on the inside diameter of the body, which gives the body more rigidity and protects against some stress. The Chinese do not have this. 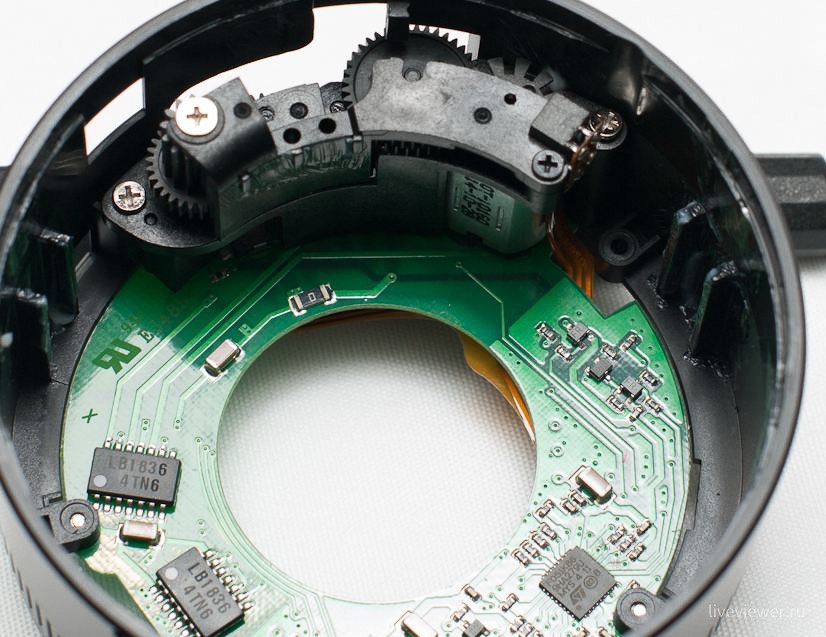 Mechanics lens Canon is packed in one module, and is one piece with the lens group. 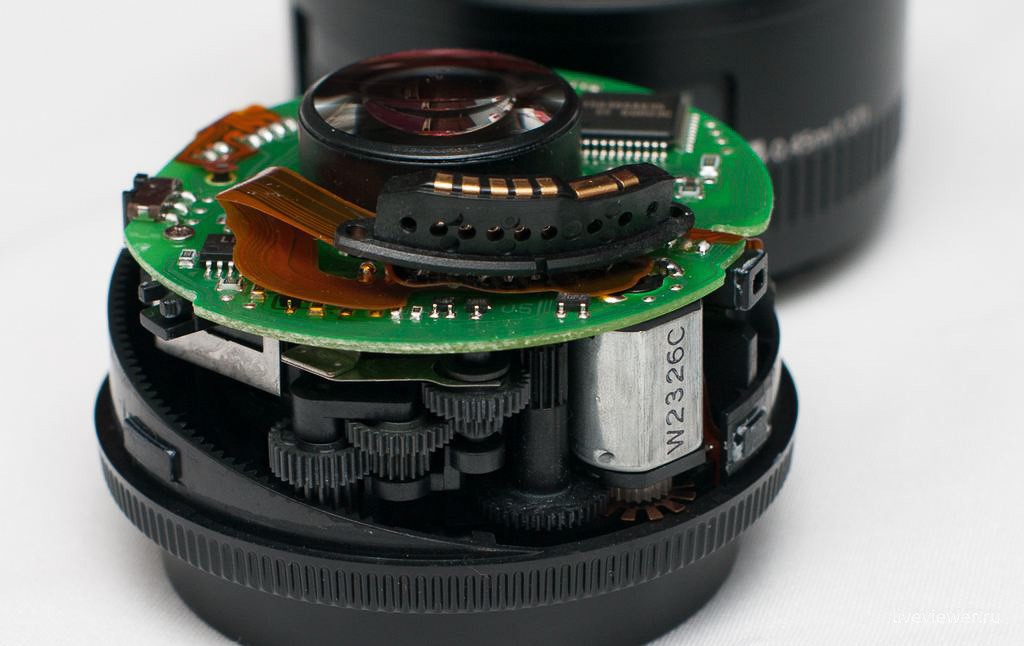 In the Chinese, both the mechanics and the control electronics of the engine with a diaphragm are attached to the inner side of the case, and are separate blocks with optics. 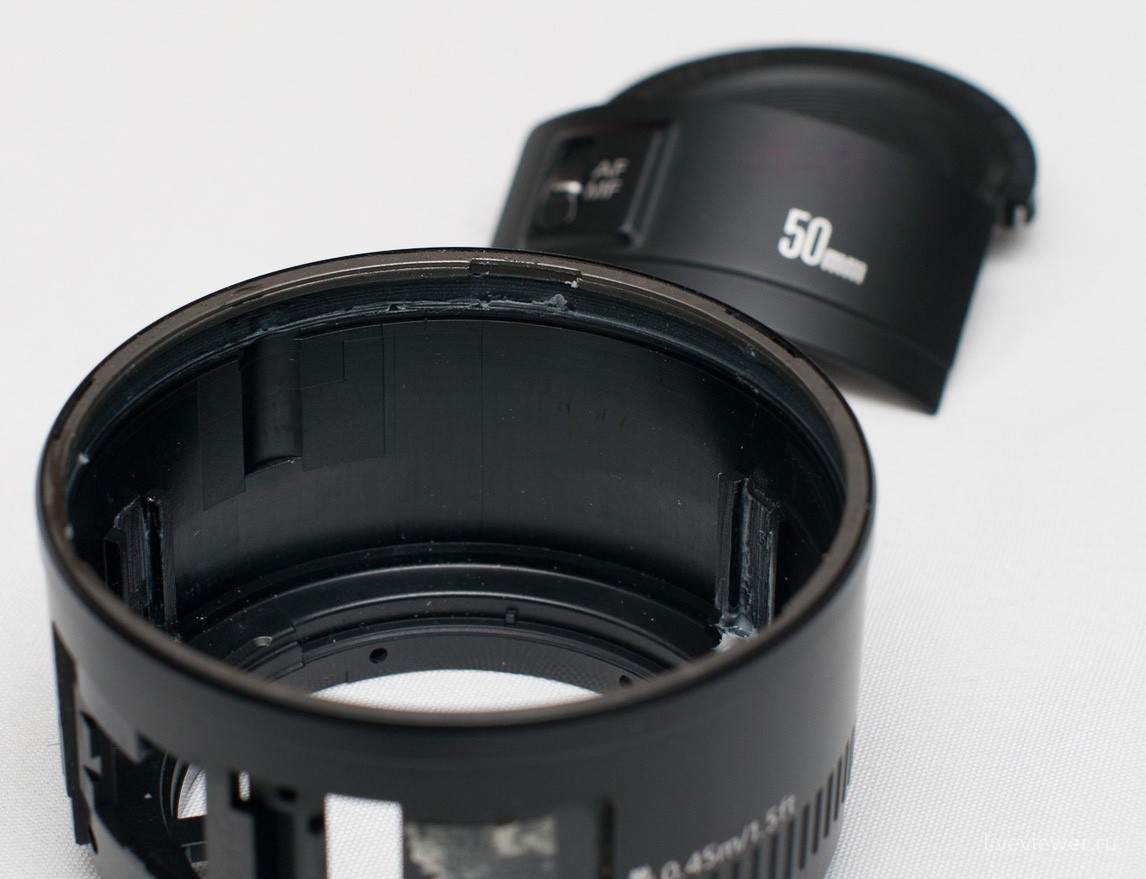 The lenses of the optical system are simply glued into the plastic, and are a monolithic structure ... until the first impact. Due to the ease of disassembly, he, in principle, can be awarded a medal of "good maintainability", if not for the lack of spare parts for the lens on the free market, and not for the flimsy drive of the focusing ring in new versions (since 2017, the design has been simplified as much as possible, now from the slightest blow to the frame of the lens unit breaks the guides).

Yongnuo's main likely use YN 50mm f / 1.8 - these are bust portraits. On cropped cameras like Canon EOS 1100D, EOS 60D, EOS 650D, EOS 1300D, EOS 300D, EOS 600D, etc. with an EF-s mount and a crop factor of 1,6 will have an equivalent focal length 50x1.6 = 80mm (the angle of view will be equivalent to that of a lens with an 80mm focal length). In this case, besides changing the viewing angle, there will be no other inconveniences. Contacts bayonets EF-s and EF are electrically and mostly physically compatible.

Alternatives Yongnuo YN 50mm f / 1.8 in fact, a lot. The picture quality most similar to this lens will be the original from which it was copied. But it is worth paying attention when buying it, how autofocus works. Does it hit, does it clearly, does it work out exactly. The Canon EF 50mm f / 1.8 II is sharper and has fewer aberrations. As a rule, the price for used on the market is slightly higher.

An updated version of the Canon EF 50mm f / 1.8 II. Redesigned construct, focusing system. Has additional lens coating. Expensive. Quite more expensive, but at the same time much pleasant to use.

An updated version of the Yongnuo 50mm f / 1.8. Perceptibly more expensive, has a nicer frame design. Optically - the same thing. Structurally - the same. They differ in frame and metal bayonetohms.

If you are thinking of purchasing instead of a whale lens "Some cheap portrait lens", you should pay attention to the lenses of the Soviet production. Something from the series Helios, or Industar 61-L / Z lens. In terms of picture quality, they will put this Chinese on the shoulder blades. The main thing is not to be afraid of manual focusing, and practice. The lenses below are a legacy of yesteryear that is still in use today. Manual lenses M42x1 on Canon fit easily through adapter М42х1-Canon EF.

Classics of the genre of the USSR. The cheapest, the most common. Ideal price / quality ratio.

Rare, but if found, then at relatively the same price Yongnuo EF 50mm f / 1.8 you can buy a German from the 60-80s. With a perfectly circular 13-blade diaphragm, good design. No autofocus, really.

It is also a good choice for leisurely shooting portraits with shallow depth of field and artistic background blur.

Despite the lack of sharpness and optical qualities in general, the main advantage of YN 50 / 1.8 is its low cost. An excellent option for a beginner, it will show itself well on cropped cameras due to the sharper central part of the optics. And it will not be nervous, like Canon, with its "misses" and "undershoots". In terms of reliability, consider the price. Canon, I think, will last much longer - six months of intensive use will finish off the Yongnuo. It would certainly be nice to see a dozen different lenses made in China tested in order to assess the overall quality of the lenses. You can buy Yongnuo lenses on Ali.