Exakta (German Exakta or Exacta in export version) is the name of single-lens reflex cameras produced by the German company Ihagee since 1933. At the time of the start of production, Ekzakta cameras were the basis of one of the most advanced photographic systems in the world. In the 1970s, the family was replaced by the more modern Praktica cameras.

The most important achievements first seen in the Exact chambers are:

In 1930, Karl Nüchterlein (German Karl Nüchterlein) developed a VP Exakta camera for Ihagee for film type 127 (frame size 4 × 6,5 cm). The letters VP (Vest Pocket) in the name reflected the pocket size of the camera, emphasizing its compactness. Nüchterlein later developed a 35mm film version, which became popular with photo reporters thanks to the rangefinder Leikas. The new Kine Exakta camera reflected the type of photographic material used in the name. Later, when the industry began to produce specially cut film rolls for cameras, the name of the type-135 photographic film appeared, but until the 1950s such cameras were called "cinematographic". Production of the Kine Exakta began in 1936 and continued until the outbreak of World War II. In 1938, production of the Exakta began with a frame size of 6 × 6 cm.

After the war, production of the Exakta resumed in the Soviet occupation zone in Dresden. In 1946-1949, Kine Exakta II cameras were produced, which practically did not differ from the pre-war model. Exakta flourished in the 1950s: the Exakta Varex cameras were launched, in which pentaprism appeared for the first time, which could be replaced by a traditional mine. Interchangeable lenses and accessories for Exakta began to be produced, for example, the Varilux exposure meter, which made it possible to produce exposure metering by the light that passed through the lens, became a prototype TTL-exposure meter. Wide-angle lenses were developed and launched into a series, the first of which was the Zeiss Tessar 4,5 / 40. Optics for "Exakte" were produced by many well-known manufacturers: Carl Zeiss, Hugo Meyer, Schneider, Steinheil, Pierre Agnier. Ekzakta became the best mirror system of its time. 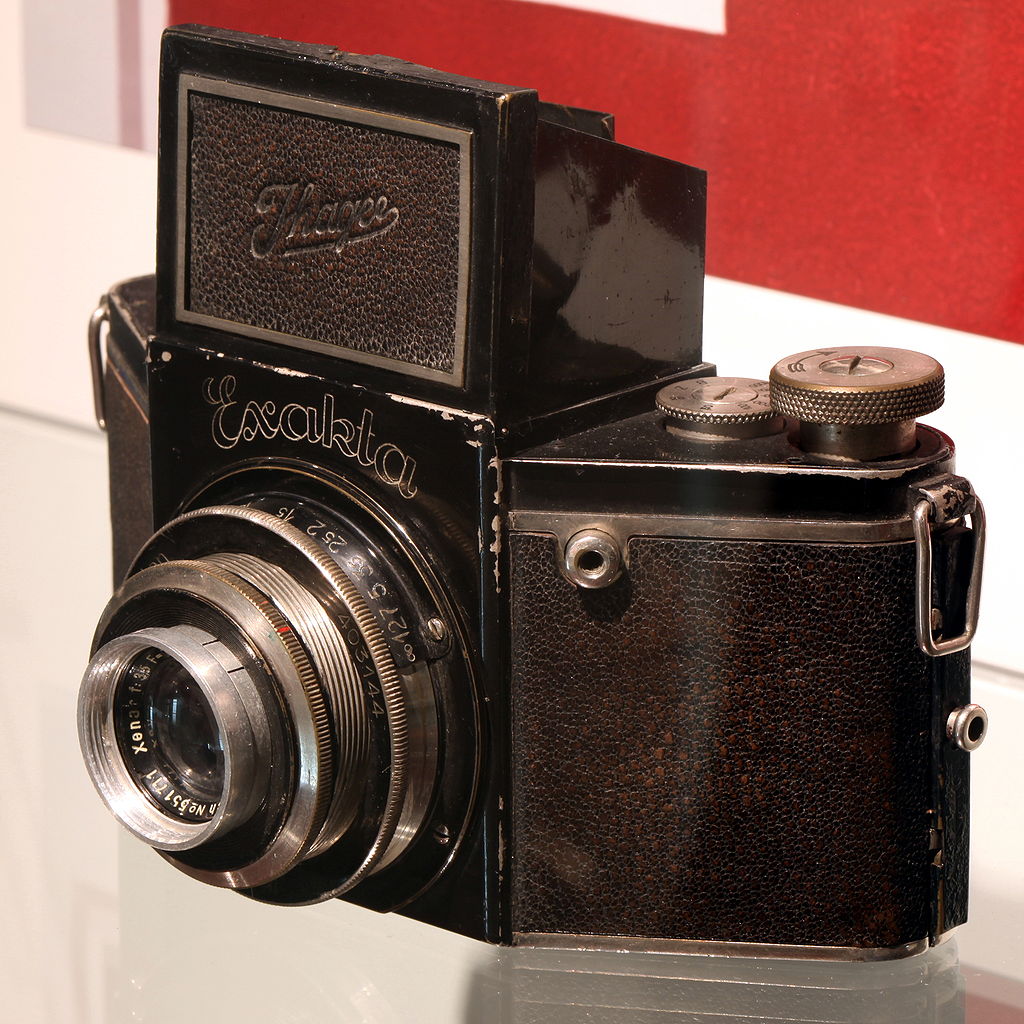 Various equipment was produced for Exakta: microscope attachments, various viewfinders, stereo attachments, attachments for medical applications (endoscopy), fur for macro photography, etc. The equipment is compatible with all Exakta models produced from 1936 to 1969. 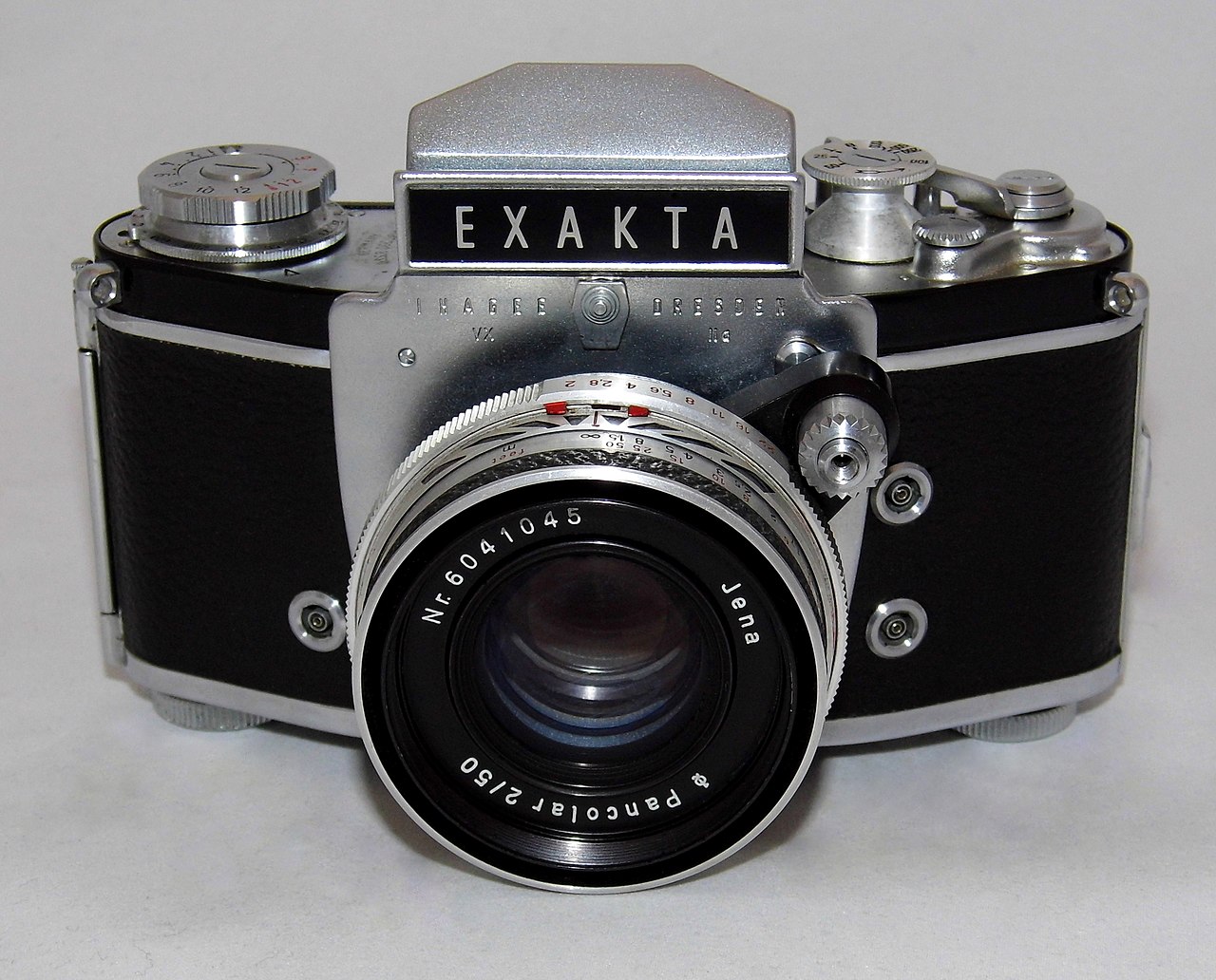 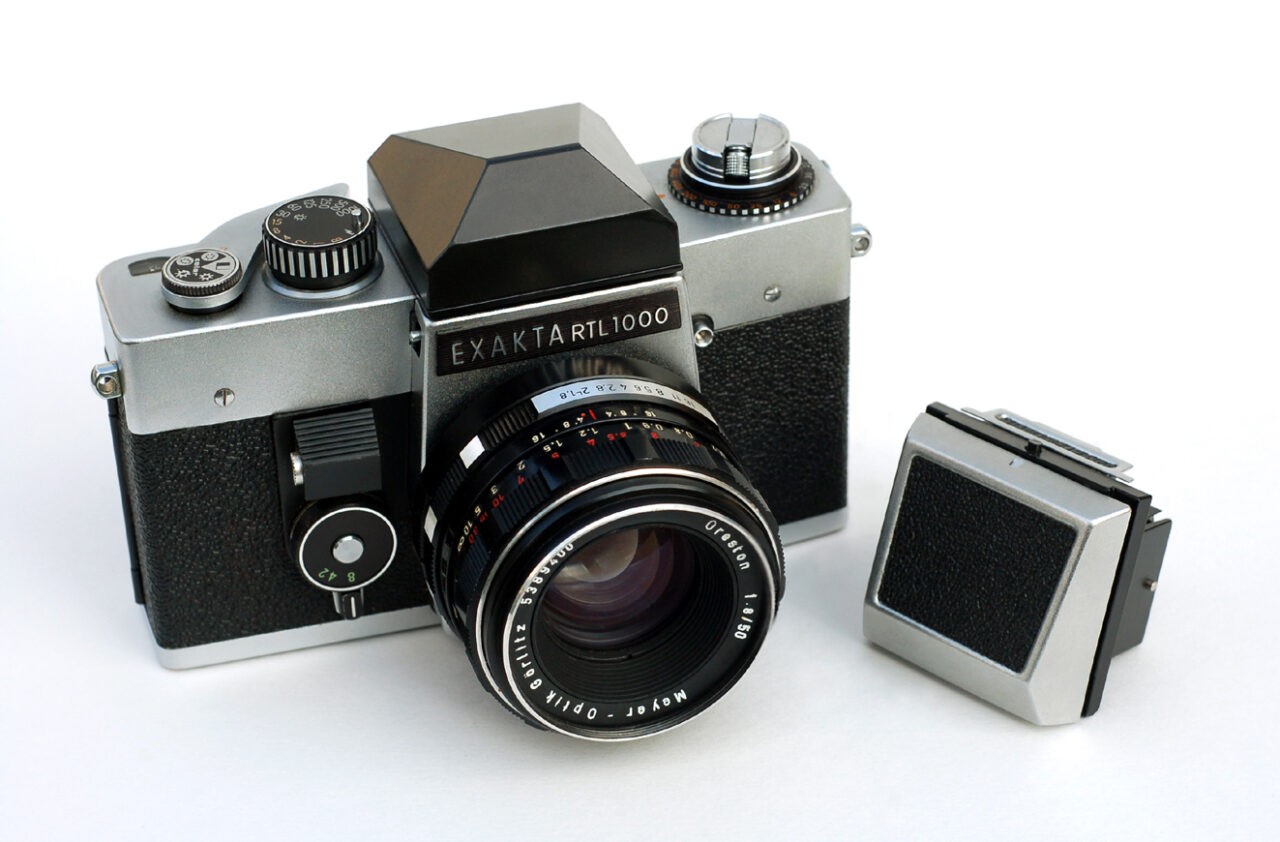 Made in West Germany 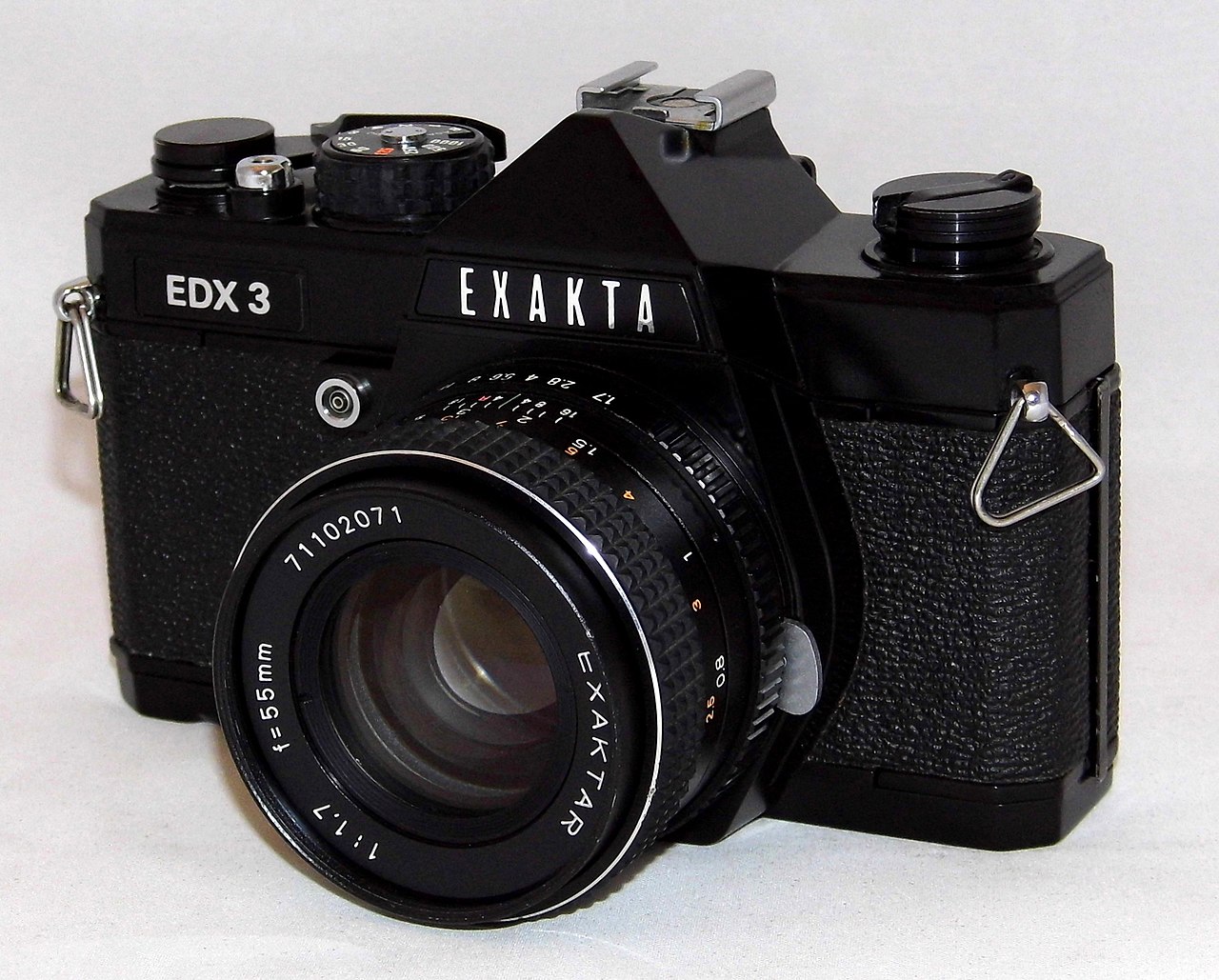 The name "Ekzakta" had already been used before in Ihagee SLR cameras designed for roller films. The Kine prefix symbolizes the use of 35 mm film, the most widespread in professional cinematography, as photographic material. The rapid development of film technology and the growth of the photographic quality of film made it possible to create compact camerassuitable for reportage shooting in the most inaccessible places. After the advent of the small-format Leica and Contax rangefinder, the popularity of this material has skyrocketed, forcing photographic equipment manufacturers to design small-format equipment. The head of the Ihagee design group Karl Nüchterlein (German Karl Nüchterlein) also did not stay away from the general trend, and developed the small-format "Exaktu", which laid the foundation for the most numerous class of photographic equipment.

The principle of a single-lens reflex camera was already known in the XNUMXth century, but was hardly used in the dominant large-format cameras. A large frame implied the presence of a movable mirror of the same size, which, when raised quickly, created strong vibration, reducing the sharpness of the picture. In addition, the focal shutterm in such cameras, more compact central ones were preferred, which made it difficult to use interchangeable optics. A small frame of "Exakty" made it possible to reduce the shaking from miniature shutter and mirrors to a minimum, realizing the main advantages of a mirror design: the use of interchangeable lenses of any focal length with their accurate focusing and parallax-free framing. The through viewfinder made it possible to use the camera for interfacing with any optical devices and macro photography. At the same time, the technology of those years did not allow to get rid of the main disadvantages of the mirror viewfinder even with a small frame format. The Kine-Ekzakta did not have the pentaprism invented much later, which made it difficult to sight, which was possible only at a right angle through the shaft. In addition, with aperture lens the image on the frosted glass was dimmed, making focusing difficult. 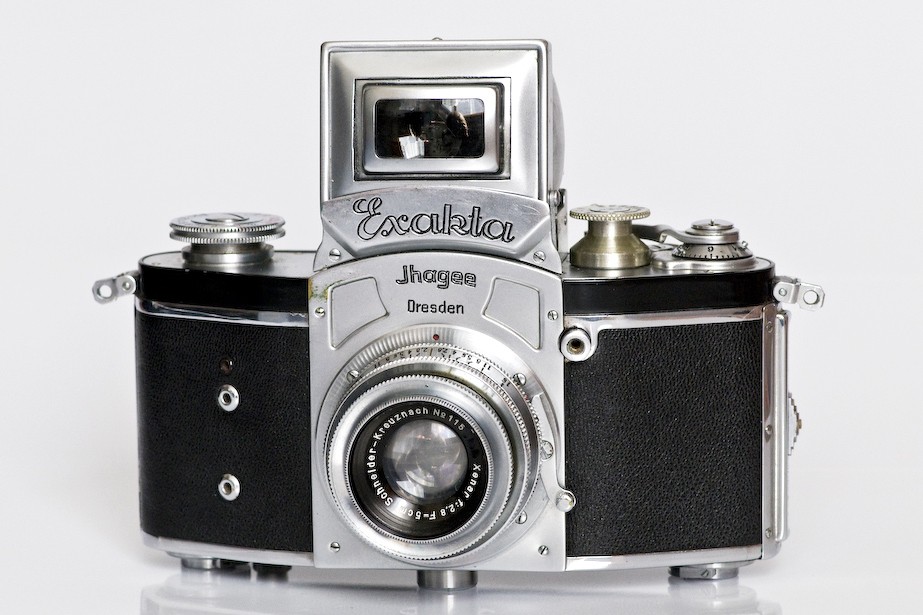 The Kine-Ekzakta camera was equipped with a focal gateohm with excerptmi from 1/1000 to 12 seconds. The mirror, like all SLR cameras of those years, was lowered into the working position only when it was cocked. gatee. The viewfinder with a plano-convex collective lens provided through sighting only at the working aperture value lens... When closed, a folding light-shielding shaft blocked the release button. In addition to the main SLR, a so-called "sports" frame-type viewfinder was built into the shaft. For this, a rectangular hatch was opened in the front wall of the shaft, which served as a front frame, and the framing was carried out from eye level, which was more convenient for reportage photography. In this case, focusing could be carried out on a meter scale or preliminarily on frosted glass through a hinged hatch magnifier. The sports viewfinder showed the approximate frame boundaries for lens 50 mm.

Lenses Zeiss Tessar 50 / 2,8 or Zeiss Biotar 58 / 2,0 were used as standard lenses. The optics are mounted using bayonet, specially designed for this camera, and subsequently with minor improvements used in all small-format "Exects", as well as in "Topcon" cameras. The technical excellence of Kine-Ekzakty is evidenced by the fact that optics with such a mount soon began to be produced by the largest optical concerns, including Carl Zeiss, Schneider, Angenieux and Meyer-Optik. The film was transported with a trigger with a long stroke of 300 °. At the same time, the film moved in the direction opposite to most modern small format cameras: from right to left, when viewed from the photographer's side. A two-cassette charger was used, which made it possible to take out a piece of film of any length for development. For this, a knife is provided inside the body.

Throughout the history of the release, the design of "Kine-Ekzakty" practically did not change. There are five known variants of this camera, differing only in minor external details.

The earliest cameras can be easily distinguished by the round swing-out magnifier built into the front wall of the shaft. This modification is considered a great collector's item. The magnifier of the second version has a rectangular shape. The third and fourth variants differ in a different spelling of the name, in which instead of "k" is used "c": "Kine Exacta". It is believed that these series of cameras were destined for export to the United States and other North American countries. In the fourth version, in contrast to the third, a threaded hole for attaching the cord is added above the two synchrocontact sockets.

After the outbreak of the Second World War, the capacities of the Ihagee factories were redesigned for the needs of the Wehrmacht, and the production of Kine-Ekzakta was suspended in 1940. It began to be released again only eight years later. This option is considered the fifth and final option. Its name is also spelled out for export: "Exacta". The Ihagee embossing disappeared from the back cover, and the rest of the camera did not differ much from the pre-war one. In the same year, 1948, the production of Kine-Ekzakty was discontinued due to the release of the new Exakta II model.