Probably due to the cost of these cameras, the closest competitor Canon P with characteristics close to the Nikon S3 was more popular (Canon P produced about 87,8 thousand copies in 3 years, Nikon SP - 22 thousand in 8 years, and S3 - ~ 14 thousand copies from 1958 to 1967)

The camera was originally shipped with a focal plane gateohm, but already in 1959 the models began to be equipped with a lamellar, with titanium curtains. Lenses with focal lengths of 35, 50 and 105 mm and bayonetohm Nikon RF. It was also possible to work with electronic and flash lamps through the connector on the camera body. Prized by collectors.

The dials on the S3 are extremely legible in all lighting conditions, and the mechanics are made of metal. The rangefinder spot has less contrast than, for example, the Leica M3. It has fuzzy edges, but moves in the direction of rotation lens... Sound shutter quiet, much quieter than DSLRs, the release button is soft. After pressing the button, you can hear a barely perceptible "clack". On top of that, the Nikon S3 is lighter than any rangefinder Leica. 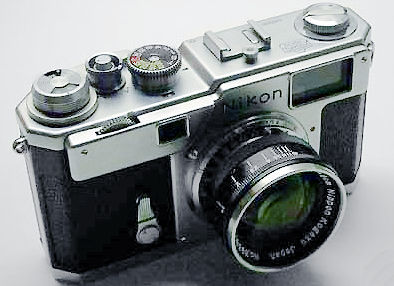