Frankly, Leica I is the most commercially successful camera for 135 format (35mm) film. In fact, the first camera to use standard 35mm horizontal film film. The idea of ​​camera developer Oscar Barnack "Small film, big shots" gave a huge impetus to the development of the photography industry.

Instead of the preface

Discoveries and inventions are inextricably linked in our minds with the names of their authors. The emergence and development of photography became possible thanks to the activities of many scientists and primarily due to the results of the scientific discoveries of Nicephore Niepce, Louis Daguerre and Henry Talbot. But the implementation of scientific achievements in photography constantly required the solution of complex engineering problems, so the contribution of designers to its progress is no less important.

More than 80 years ago, the serial production of the first small-format Leica camera began. However, the name of its inventor is much less known than the invention itself, which at one time was a real revolution in the field of camera engineering, which in many ways changed the style of photography itself. 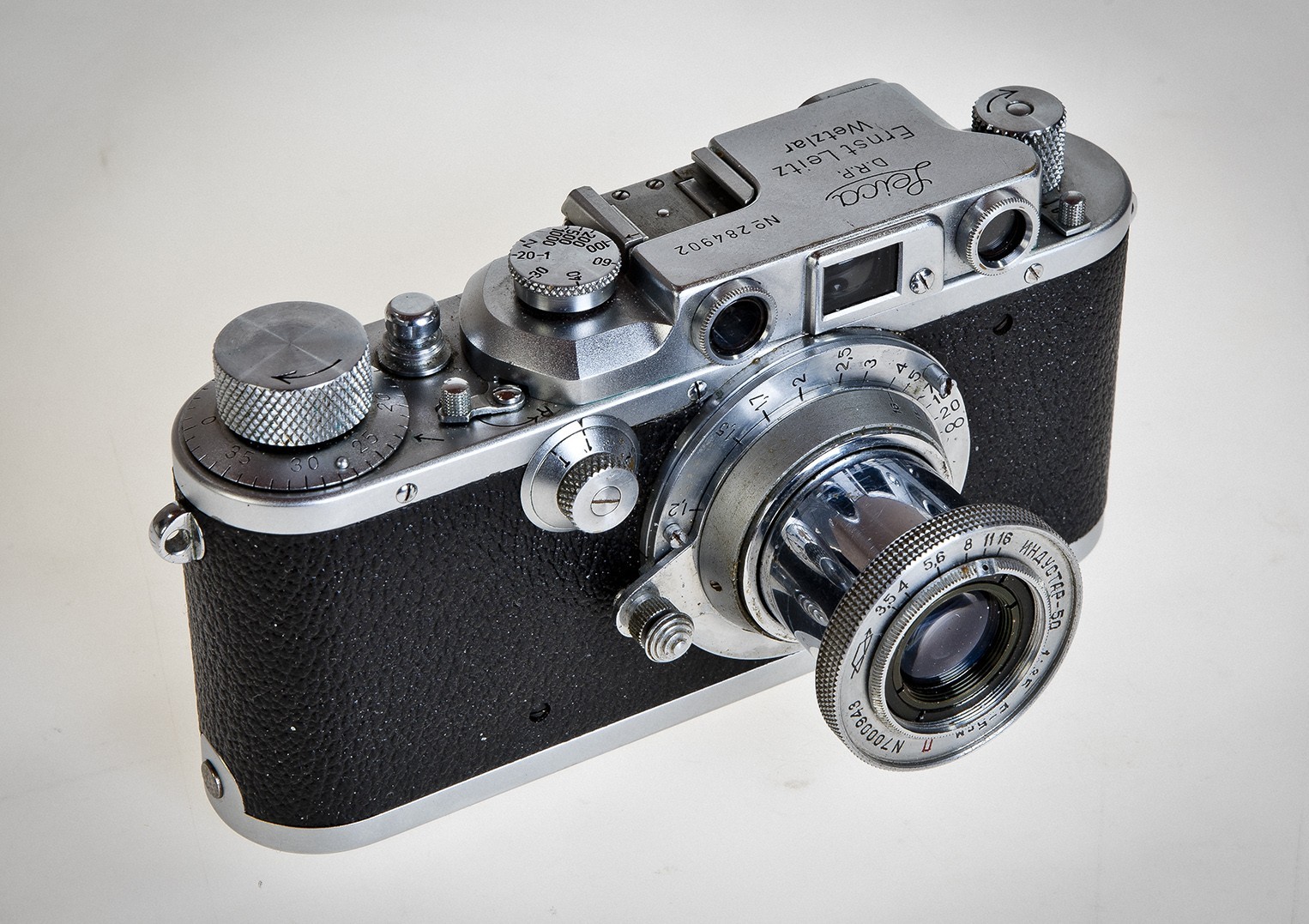 Although the Leitz enterprise mainly produced microscopes, it also dealt with related fields - it produced a small number of special photographic equipment for taking pictures with a microscope, as well as photographic lenses for it. Some of the lenses were sold to other companies that made conventional cameras. For the optical company, the technology of filming that was new for that time was also of well-known interest. The creator of the first watering can, Oscar Barnack, was tasked with testing cinematic shooting techniques. The cameras that existed at that time were made of wood, were large and inconvenient to work with. 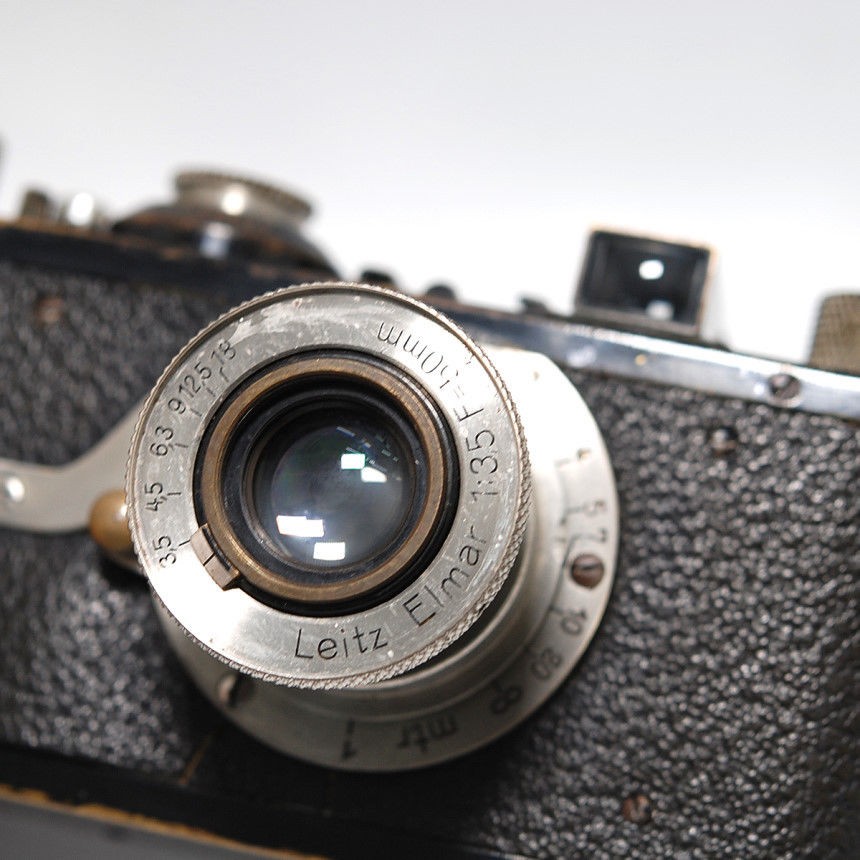 In 1912, Barnack designed his all-metal movie camera out of aluminum, which was lighter and more comfortable. 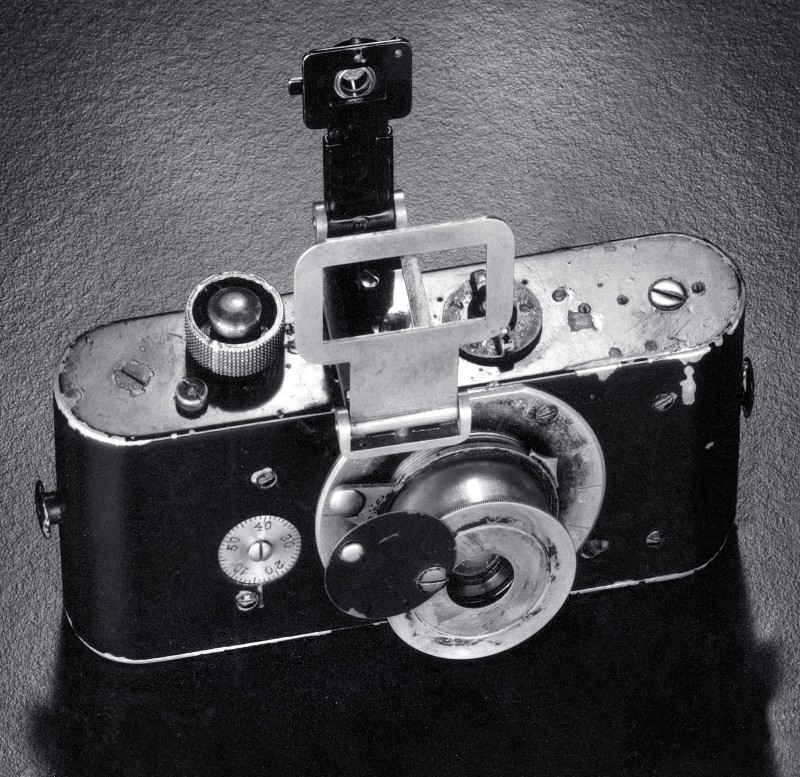 From the exposure meter

To make it easier to determine exposure when filming, Barnack in 1913 designed an original exposure meter in the form of a small apparatus, in which the same film was used to determine the exposure as in a movie camera. The result was a small camera that held 2 meters of film and had curtain shutter, the platoon of which was associated with the transportation of the film. A single camera exposure of the order of 1/40 s corresponded to the working exposure of a movie camera. With the help of such a camera-exposure meter, several pictures were taken with different diaphragmmi, the film was immediately developed and the results obtained were used to determine the correct exposure for filming.

This exposure meter was distinguished by another very significant innovation - Barnack doubled the shooting frame in it, combining 18X24 mm film frames into one and two, thereby creating a fundamentally new frame format - 24X36 mm. Such a frame made it possible to improve the quality of photographs enlarged from the negative. The new format will later be called "ley" and it will become the basis for small-format photography. 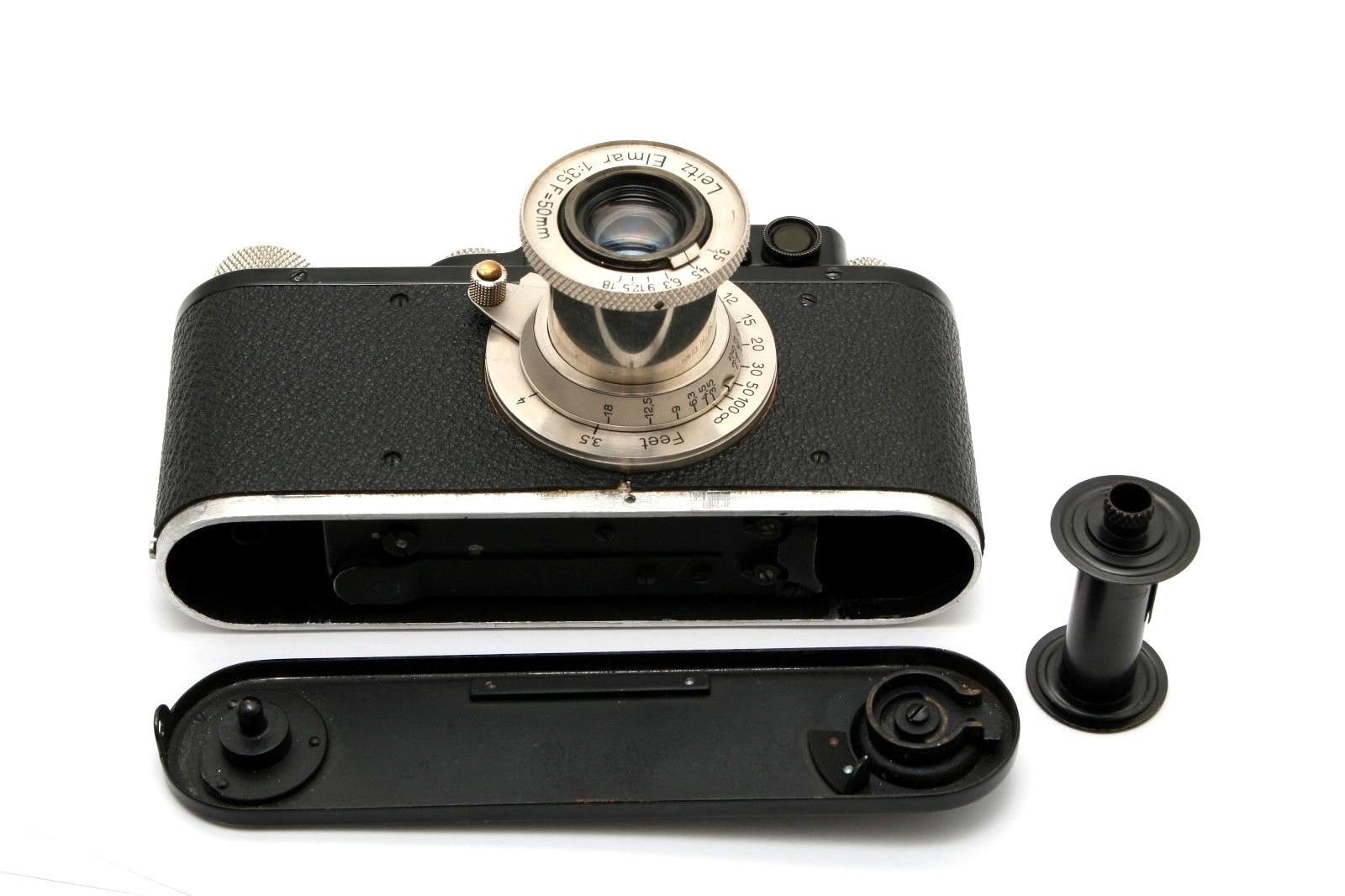 A significant step forward in the implementation of Barnack's idea to create a small and convenient camera was also facilitated by the smaller graininess of films compared to the graininess of photographic plates of that time. This is how a camera emerged from the exposure meter, which was later named "UR-Leica", the prototype of "Leica". Two copies of such a camera were made. Barnack used one himself, the second was intended for the owner of the company. The embodiment of the long-matured idea of ​​a small-format camera in metal took place in a relatively short time. As for the improvement of individual units and parts for subsequent models, it took weeks and even months of painful searches and complex calculations.

Soon the Leica prototype had all the main features of the future serial camera, with the exception of one - gate did not close automatically after exposure. Subsequently, this deficiency was also eliminated. As lens the camera was tested first "Kino-Tessar" 3,5 / 50 mm, designed for a film frame 18X24 mm. But it did not give a clear image in the corners of the frame of the new 24X36 mm format. Therefore, Barnack tested various lenses on the prototype, in particular "Summar", "Milar" Leitz 4,5 / 42 mm. The Leitz prototype kept in the Leitz museum is equipped with a 4,5 / 42 mm Milar lens. 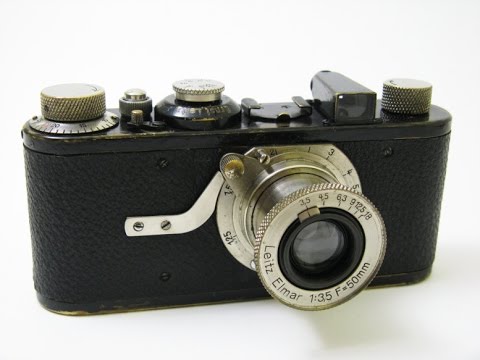 The years were not in vain. During this time, Barnak improved gate and transport of the film, a cassette for charging the camera in the light and an optical viewfinder were developed. For the first time, the lens for the new format was calculated - this work was brilliantly done by Professor Max Berek. And already in 1923, the so-called zero (pre-production) batch of cameras in the amount of 31 copies was released to test the reaction of the market and professional photographers. 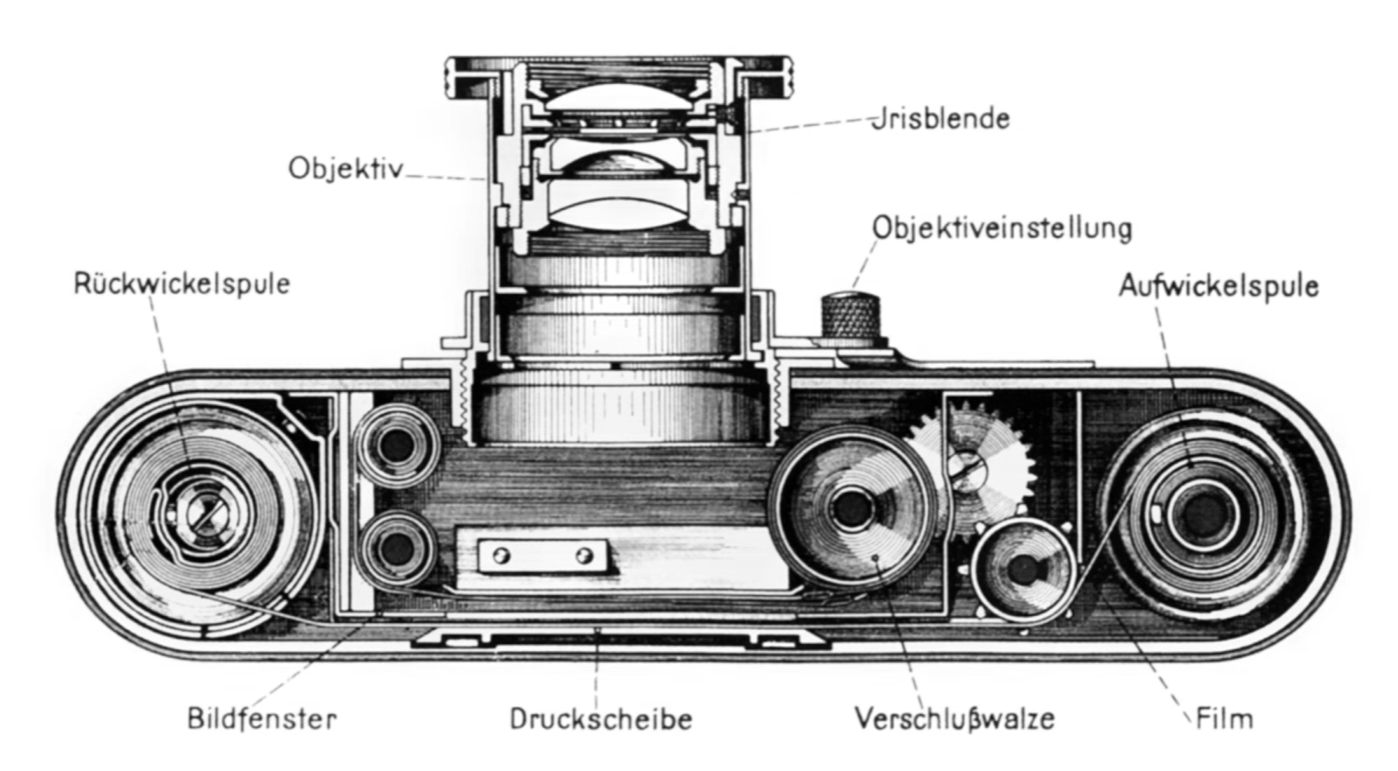 Initially it was suggested to call the camera "Barnack's Chamber", but the name was long and not easy to pronounce in all languages. In the end, she received the world-famous name "Leica" ("Leica"), formed from the first syllables of the words "Leishopping center "and"kameasure". The new camera was officially presented at the spring Leipzig fair in 1925, and a few months later it went into series.

True, at first the skeptical attitude of professional photographers towards an unusually small for that time and, it seemed, toy camera prevailed, but soon Barnack's remarkable invention made its way and won a brilliant victory. A new type of small format camera, working on standard film, simple and easy to maintain and made with precision precision, has earned its right to life.

The First World War interrupted the systematic work on a new camera. But when the country was overwhelmed by a severe economic crisis and inflation, and the enterprise was threatened with the loss of skilled labor due to a drop in product sales, the camera was again remembered.

Barnack worked hard and persistently to improve his camera, which was subsequently equipped with a standard 28,8 mm flange (M39 mounting thread), which made it possible to use interchangeable optics. Then the camera was equipped with a built-in rangefinder.

Enlargers and overhead projectors began to be used to obtain images of large sizes, and it was Barnak who created the first small-format overhead projector. Numerous accessories were designed that significantly expanded the possibilities of using the camera - macro attachments and macro tripods, stereo lenses and stereo attachments, reproduction lenses and rings, devices for microphotography and much more ... 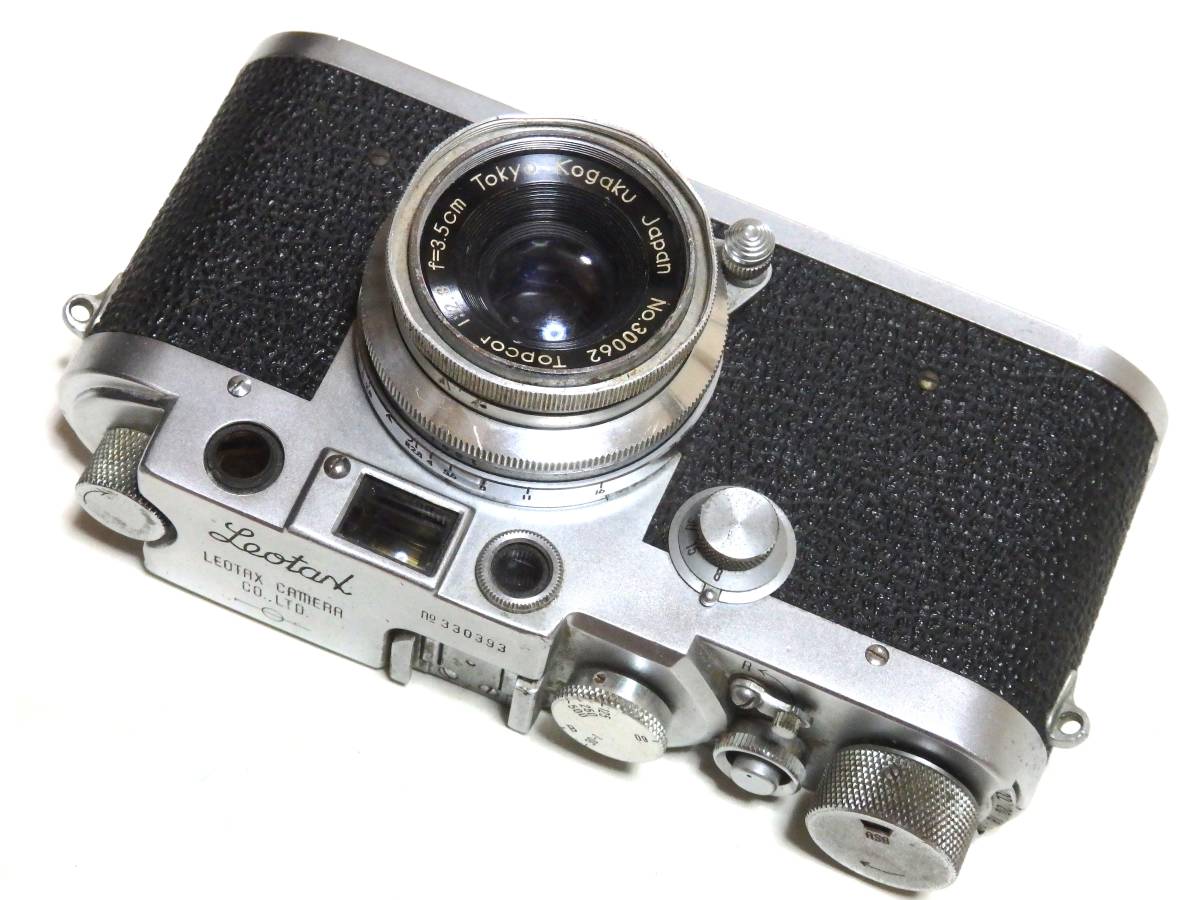 Copies of the Leica I (II) camera were produced by many manufacturers in different countries:

The original Leica I was released only 58735 cameras, of which 144 cameras with Anastigmat lens, ELMAX 713 cameras, Elmar 56548 cameras, and Hector 1330 cameras. All lenses were designed for a 5cm focal length and an M39 screw connection. The maximum aperture value is f3.5, tube-type.

In the secondary market, cameras in more or less decent condition are sold for 4-5 thousand dollars.

Main characteristics of the camera:

The rights to the pictures belong to their creators. The article uses excerpts from the materials of B. KUCHERENKO.