PRAKTICA LTL is a small format single-lens reflex camera with a frame size of 24 × 36 mm and with built-in automatic exposure control associated with the set shutter speed, aperture and film speed. 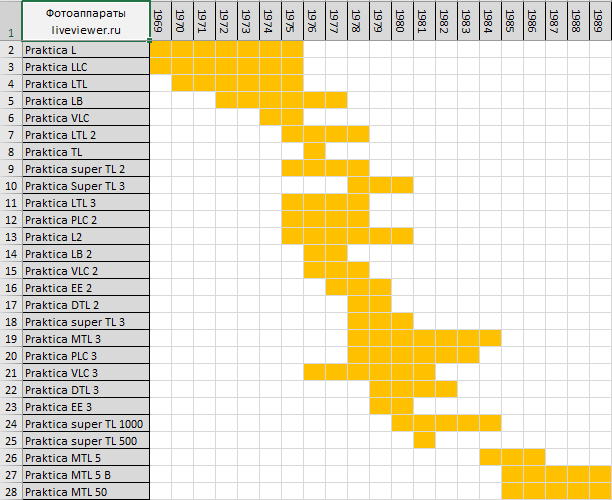 Actually, it is functionally the same as the Praktica MTL 5B released much later. A small-format single-lens reflex film camera manufactured in the GDR at the VEB Pentacon plant. Differences are only in the finish of the case, coatings of the optical system. TTL- Praktica LTL is measured at the working aperture values ​​(stop-down metering), to turn on the exposure metering system, there is a remote lever above the shutter button, coupled with an aperture repeater. In total, about 278 thousand copies were produced from 1969 to 1975. Standard lens - Meyer-Optik Domiplan 50mm f2.8, Pentacon auto 50mm f1.8, Zeiss Jena 50mm f2.8.

M42 SLR camera, which has a threaded connection of the same name with contemporaneous lenses. The optics from this camera can be painlessly applied to modern digital cameras through adapter with thread M42. Read the article about adapters.


This camera can be found under the name

There are differences in the series:

Cameras "Praktica" on the portal

Good, pleasant in hands, film camera. Glossy plastic, the lower part of the camera is trimmed with leatherette. The camera was supplied with a plastic case. The chassis is made by injection molding. The subsequent processing of the case took only 45 seconds, for this a special machine was used, which could simultaneously perform 50-60 operations. This device could drill, countersink, thread, etc. from all six sides of the chamber. Up, down, forward, back, left, right. 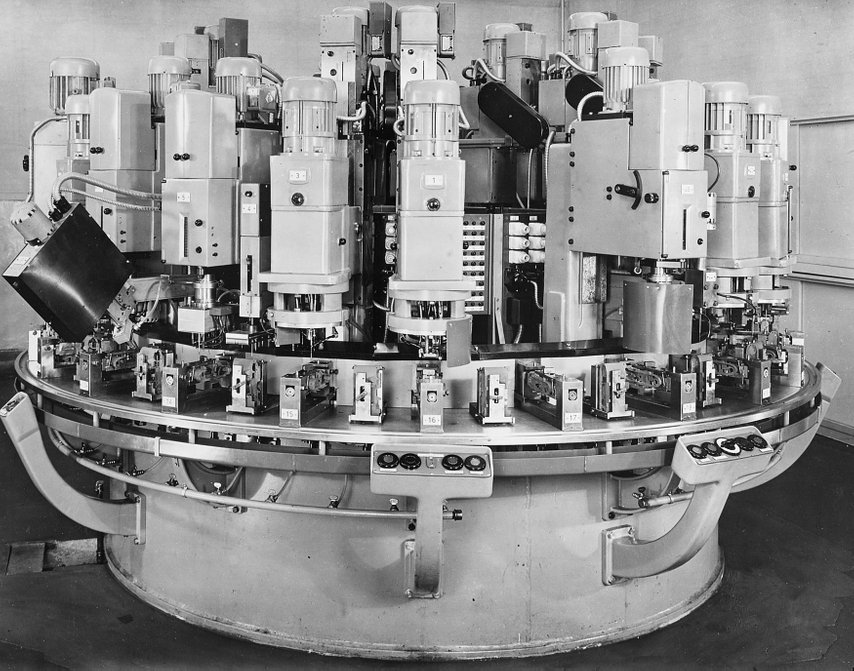 Manual. Exposed on the lens, taken into account by the exposure meter during preview by pressing the shutter button halfway down, clamped directly during the shutter release shutter.

Silver-plated pentaprism, now often you come across options with a destroyed coating. It is restored either by applying an aluminum layer in an electrovacuum chamber, or by the reaction of a "silver mirror". For ease of focusing, the viewfinder displays a matte, micro-raster screen. The viewfinder is lighter than the ZenithTTL, coverage is greater (97%). 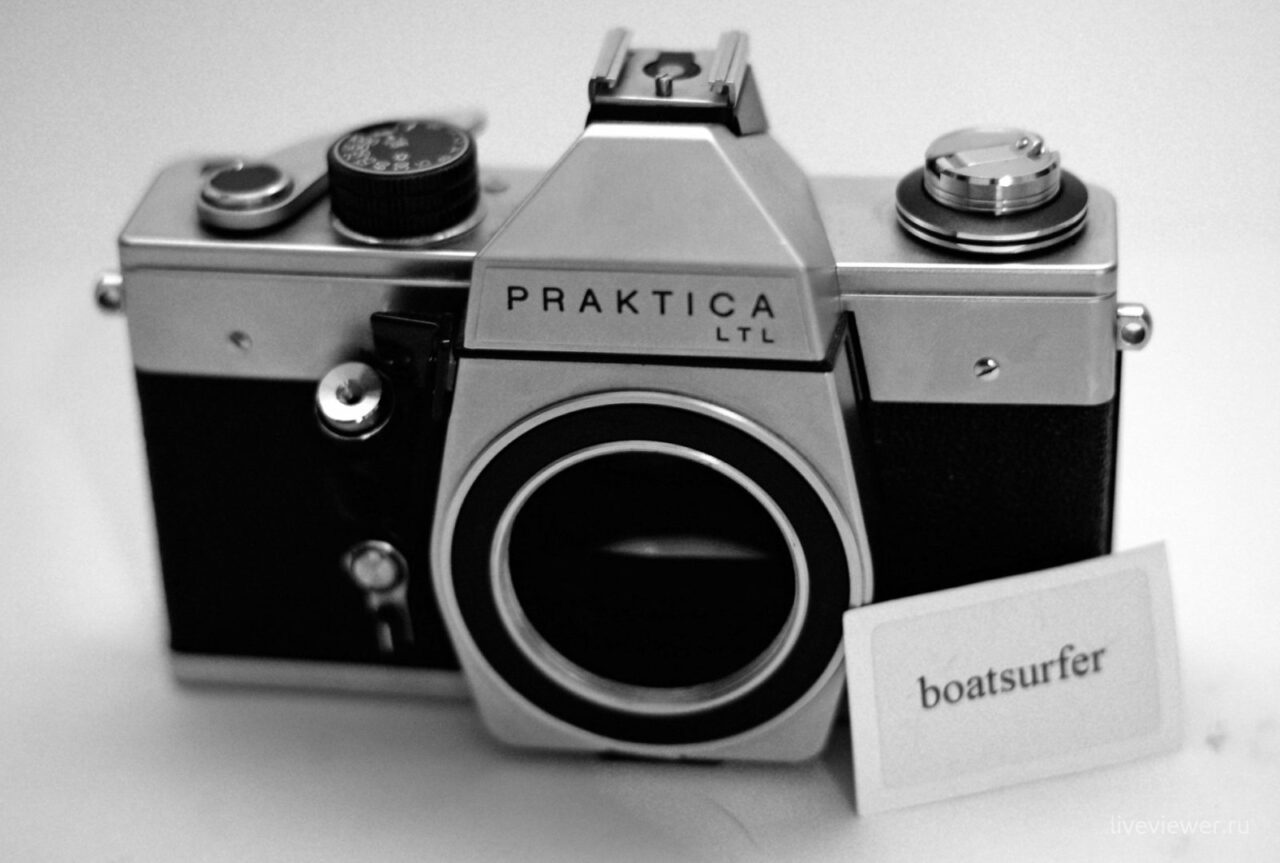 Unlike most contemporary cameras, Praktica cameras did not use Copal shutters. In fact, the shutter was developed by Pentacon independently in the 1960s, and is accordingly patented.

The development of the steel blade focal plane shutter, which has been used in the Praktica L series since 1969, has a long history. The Konica F (born 1960) was the first camera with such a shutter, with which Konica was able to achieve some success in the Japanese market, and within a year Dresden engineers filed the first patent applications in this area. According to GDR document No. 27 434 of May 4, 1961, the basic principle of the later Horst Strehle scissor-lever lock is already recognizable. 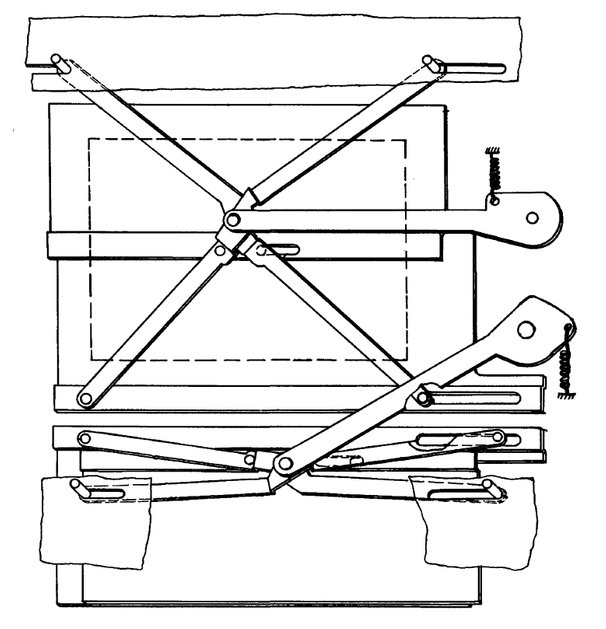 Lamella scissor lock (1961) In this variant, the scissor lock consisted of only two slats per shade. Such an implementation would result in a rather unwieldy design that could hardly fit into a compact camera.

The problem with this arrangement lies in the fact that the lamellas, arranged one above the other in a fan-like manner, lie parallel to each other both in the folded and in the unfolded state. The Japanese Copal uses Hi Synchro in its shutter, the so-called parallel crank guide. In it, metal bars are attached to two parallel arms of the lever. The solutions inherent in this design became especially popular when the more compact single-lens reflex cameras began to be produced (from the mid-1970s). Such a shutter allowed the use in light cameras due to the minimum of vibrations created during operation. In addition, such a design accelerated to unthinkable shutter speeds and was very reliable. Almost all blade shutters today use the Hi Synchro shutter principle. Even the leading Japanese camera makers have almost completely abandoned their own shutter designs and source their shutters from Copal or Seicosha. 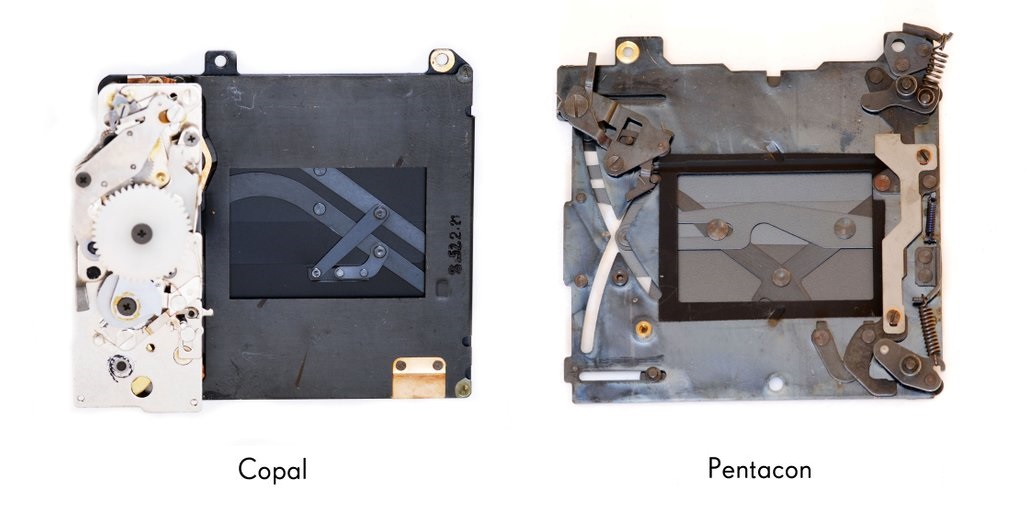 Pentacon's own design worked not with parallel, but with crossed drive plates, like scissors.

The shutter according to patent No. 27434 has a rather bulky design. In addition, it was feared that such a design would not provide the necessary high speeds. The shutter was modernized in such a way that only one lamella was used, which only partially covered the frame window. The rest was occupied by a flexible rubberized fabric that is wound around a spring roller. This combination was used in 1967 in the Pentacon Super professional camera. This made it possible to achieve a very fast shutter speed of 1/500, which remains accurate even half a century later. The disadvantage, however, was the bulkiness of the solution and the complexity of its maintenance. 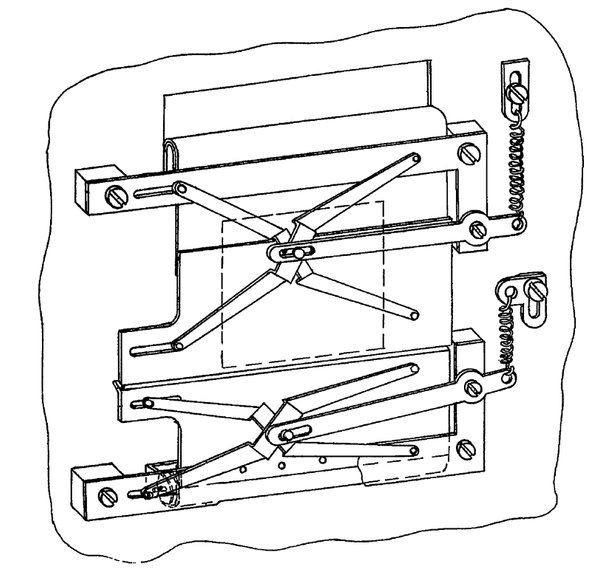 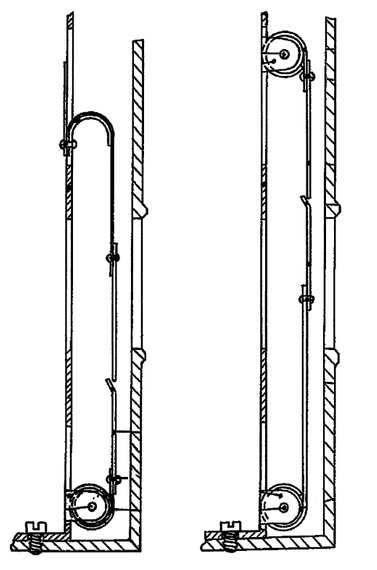 A new generation of cameras was developed in Dresden, which, thanks to three main features, was to ensure the survival of local camera production for the next 20 years. The Praktica L series was modern both in design and technical solutions. The cameras used a scissor shutter, registered in 1968. 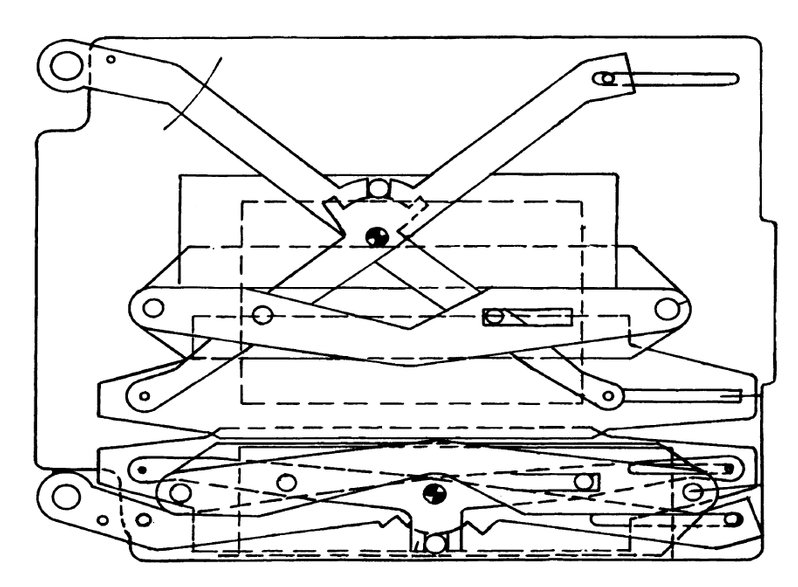 This solution was used in the Praktica L series cameras for the next 10 years, and five million units of cameras. However, during the development of cameras, the Praktica B200 caused significant problems, and, nevertheless, it was replaced by the Copal Hi Synchro shutter, which is more common among competitors.

On the bottom of this film camera there is a connector for exposure meter batteries. The exposure meter readings are indicated in the viewfinder by moving the arrow (+, -). Next to the shutter button shutter there is a lever for previewing the grip, coupled with the pusher of the lens diaphragm repeater and turning on the exposure meter. The exposure meter can be corrected by changing the DIN value. To make corrections to the exposure meter, there are trimming resistors under the bottom cover tightened with screws. For power supply, batteries of the Soviet type RC-53 1,35V were used (modern foreign analogue - elements of type 625, slightly smaller in size, voltage 1,5V), LR-44 (AG12) are also suitable. 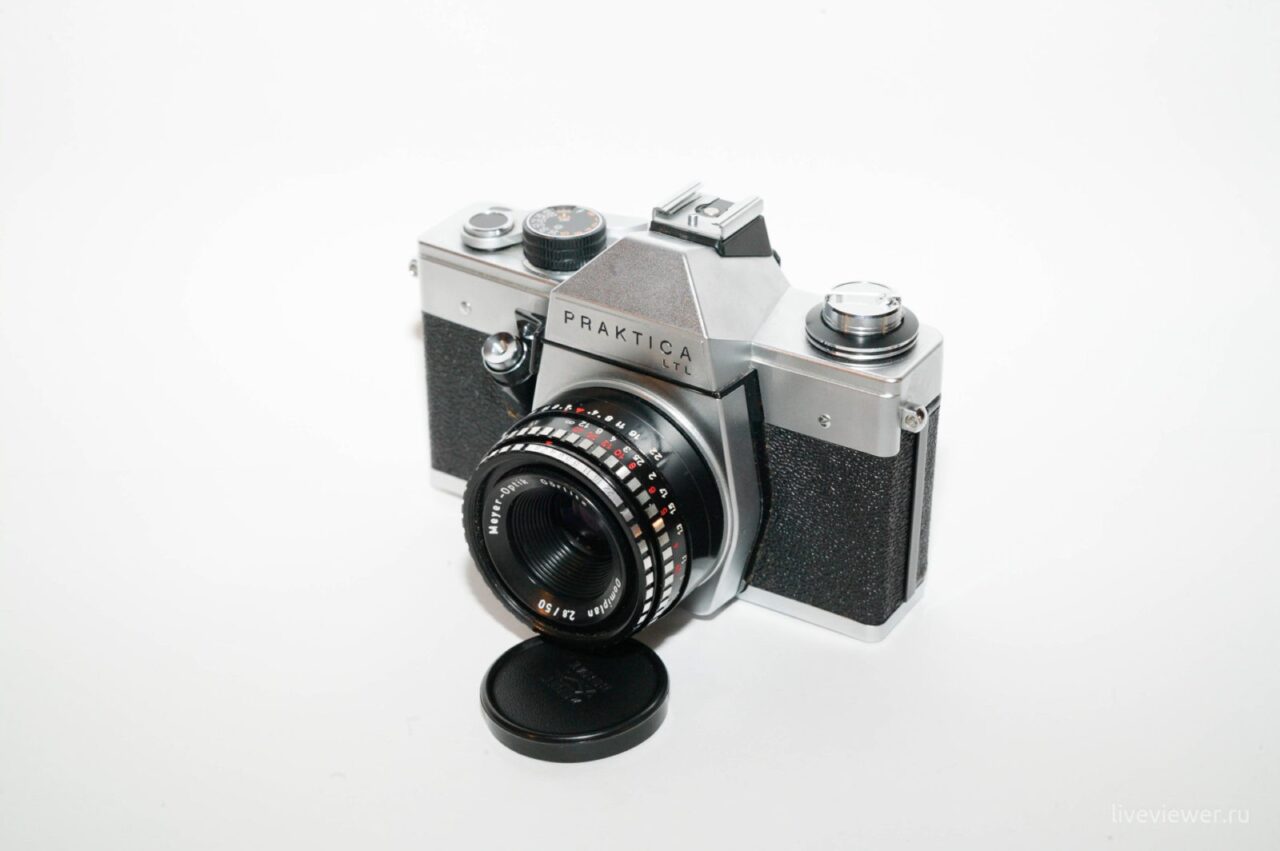 The convenience of working with a Praktica LTL film camera from the 80s is, of course, so much so. But the device is more convenient to use than Zenits. A device for unhurried shooting and thoughtful positioning of objects in the frame.

Film rewinding is of a roulette type, the rewinding mode is switched on by a mechanical button on the bottom of the apparatus. The frame counter is located on the top cover and has an automatic reset when the cover is opened. 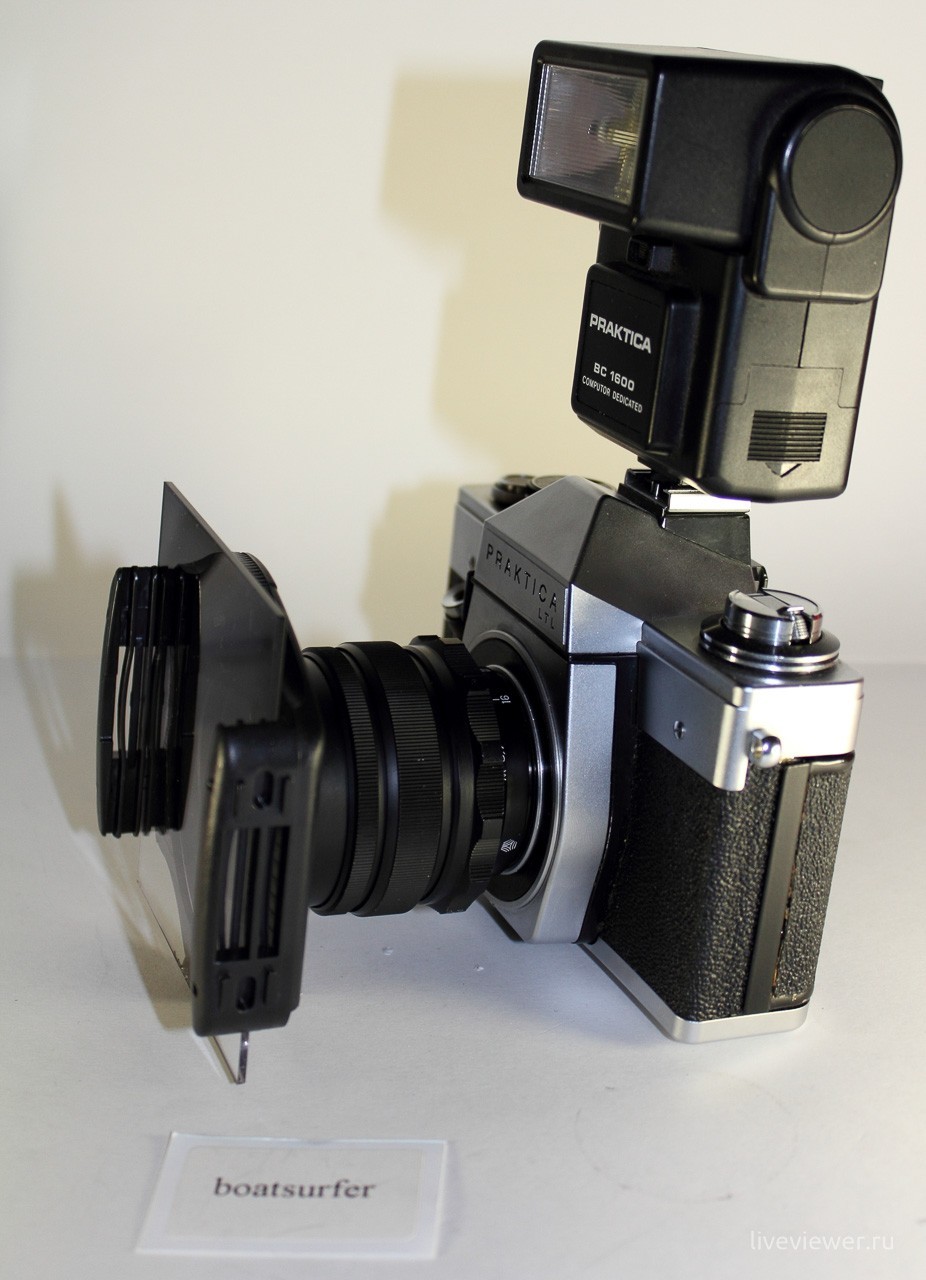 For Praktica cameras, any 135 type (35mm) film is suitable, in standard spools. You can use both black and white and color, you can wind the film yourself. Can be bought from masters... A budget hobbyist color film from Fujifilm or Kodak, black and white Tasma, works well. Films c ISO 400 are suitable for low light conditions, and on films with ISO 200 is best for shooting outdoors in clear or slightly cloudy weather. Examples of photos on film can be viewed here. 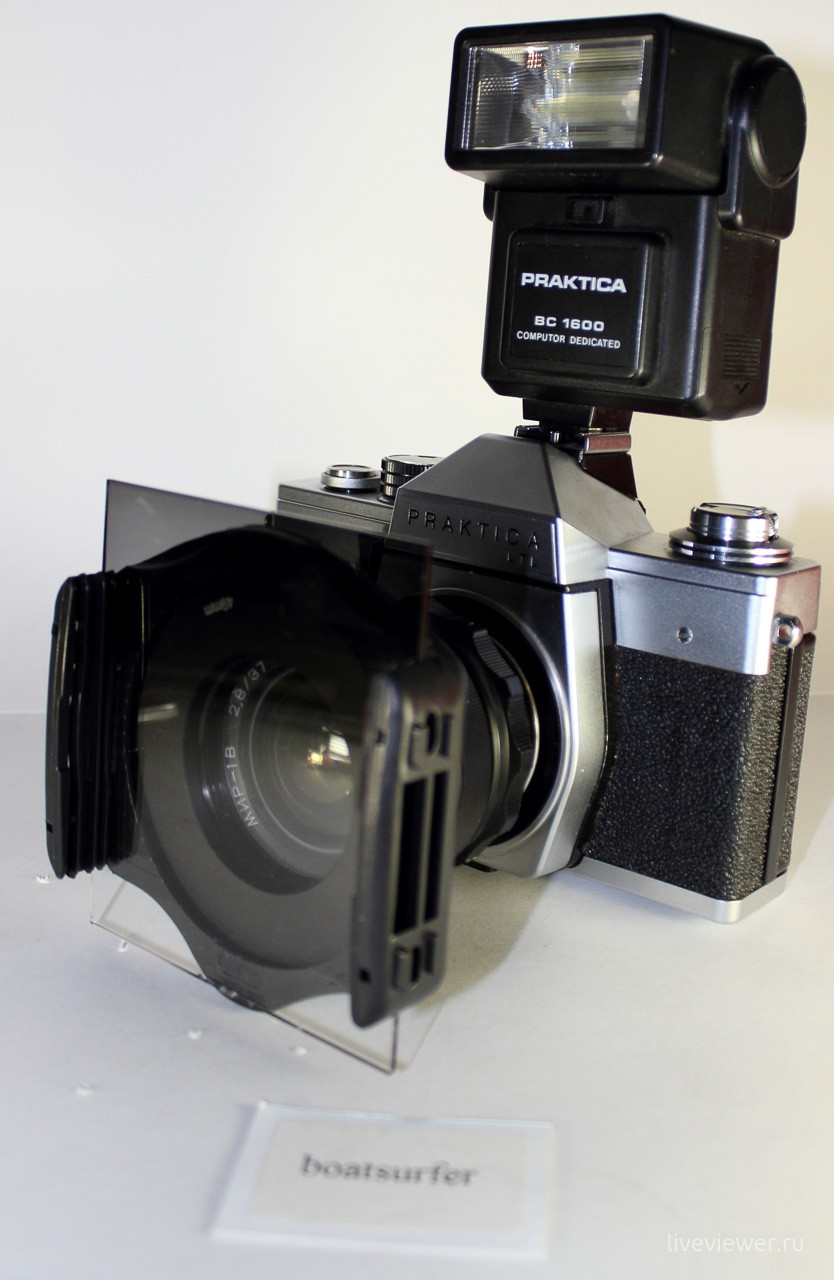 Praktica LTL works quieter than Zenits. Not strange, and it is.

More reliable than devices with focal plane slit shutters simply due to the lamellar metal shutter. The dream of an advanced Soviet amateur photographer. Well, just because Japanese cameras were completely inaccessible.

Here it is, the dream of a Soviet-era amateur photographer (I remember very well the price tag of 500 rubles at Praktika and next to it from 98 rubles to 220 rubles for the Zenith). Long-lived camera. It was produced in different guises, modifications and with different names for almost 30 years. By the way, the absolute tracing paper of Praktika was produced in Japan under the Porst Reflex brand, and in the GDR on the basis of Praktika, Pentacon RevueFlex was produced, which differs from the original only in the form of pentaprism, and Revue ML. Praktica LTL is made with real German quality and quality. It is felt as soon as you take it in your hands. The first thing you immediately notice is the unconventional location of the shutter button. shutter and tutor-metering buttons. Out of habit, it's easy to get confused in three buttons. After Zenith, you have to get used to such "rasping". But after a while, the hands somehow "found" the camera themselves, and then I appreciated the convenience of such a scheme (Here it is, science-ergonomics! Otherwise, the tides and rushes ...).
The index finger of the right hand freely rotates the shutter speed dial, the middle finger rests on the metering button and freely moves from it to the shutter button. The thumb is just under the cocking trigger. And all this - without taking your eyes off the viewfinder. Class! And yet, the shutter button shutter securely hidden from accidental pressing. The arrow in the viewfinder indicates that gate not cocked, but when cocked, it hides and does not interfere. Although the viewfinder itself is a bit dark. It is difficult to focus in low light conditions. For that, unlike Zenith, the Praktika viewfinder covers 92% of the frame. The exposure range of Praktica LTL is typical for cameras of that period: from 1 sec to 1/1000, plus “B”. For flash sync, there is a dedicated excerptalthough the flash can be used with excerptmi 1 / 125sec and longer. The range of input sensitivity is not as wide as that of more modern cameras, but it is quite sufficient for amateur purposes.
The Praktica LTL sensitivity dial is combined with the shutter speed dial, which is very convenient. The camera does not have any extended functionality, it is not overloaded with buttons and baubles, it is simple and understandable even for a novice amateur photographer, but the gap from the mechanical Zenith is obvious. From camera sores - inaccurate operation of the exposure meter. Moreover, judging by the experience of the experienced, this disease is chronic. The light meter is very "lazy", inertial, and on excerptx 1/30 and longer is frankly lying and the negatives are underexposed. So, when shooting in low light conditions, you have to make a correction. I think this is due to the aging of the photosensitive element. The camera is still not new. In the workshop I was told that the exposure meter can be easily cured. By the way, the opinion of the artisans is that the camera is very easy to repair.

Praktica LTL is a pleasant to use, solid film camera. An excellent film camera for the novice amateur photographer. With hands can be found for "very inexpensive" in the 12-14 year. However, in 2021, their price tags are hellish even on ebay. Take it, if only out of a special love for the "occupied GDR", since more interesting vintage cameras can be found at the same price.