At the same time, you should feel a slight click, confirming that the preset ring is locked. Focusing by turning the ring for curly knurling at the maximum aperture lens, without interrupting the observation of the subject, turn the aperture ring until it stops, and then press the camera shutter button. If the distance to the subject is known in advance, find it on the distance scale and turn the ring to set this value against the red index. The distance to the subject is measured along the optical axis of the lens from the plane of the matrix or film, usually indicated on the camera.

Due to the smooth rotation of the focusing ring and the absence of a clamping aperture value, the Helios-44-2 is better than other Helios for video recording with sound and soft focus shifting with control of the depth of field “on the fly”. 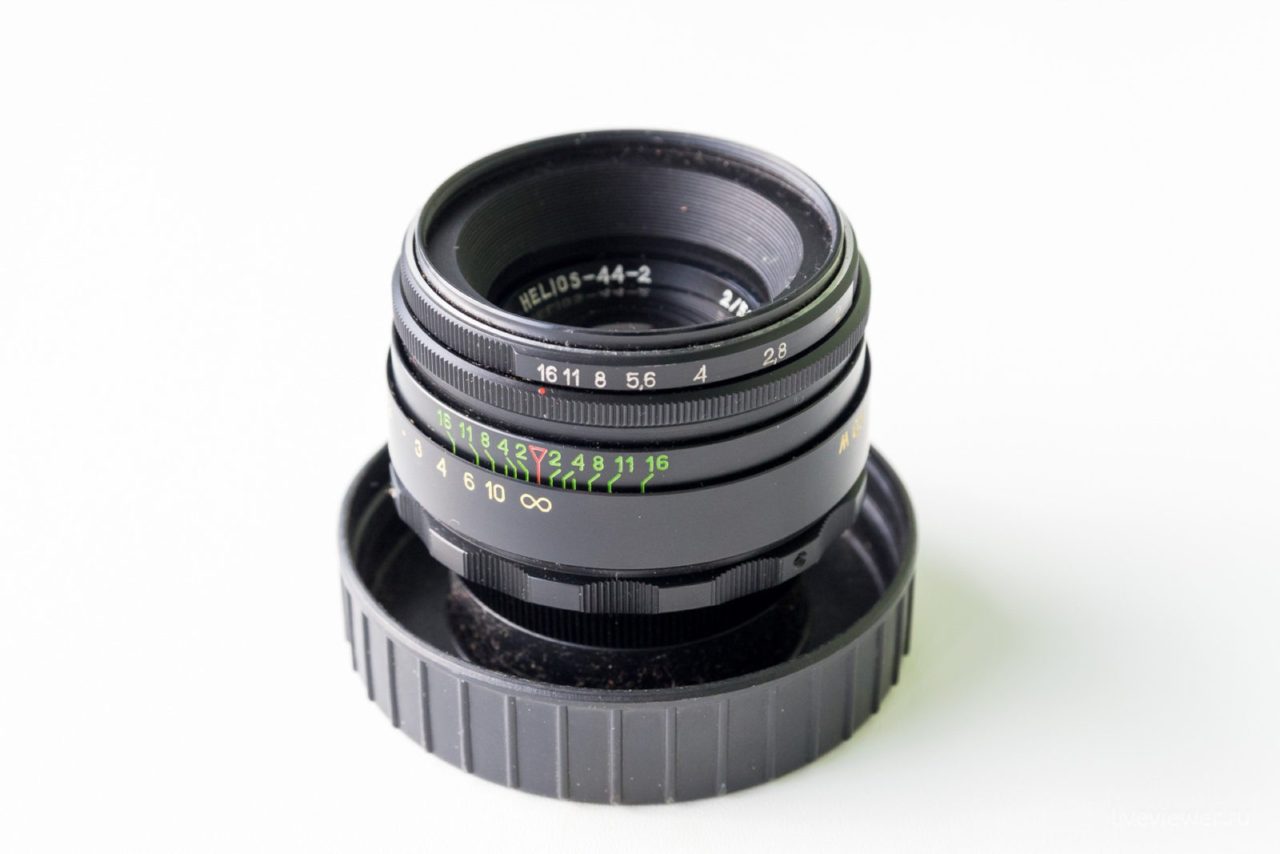 Due to the shallow depth of field, focusing on cameras with a small viewfinder size may have trouble hitting the target. You have to use LiveView mode much more often than with autofocus lenses.

As an alternative to LiveView, you can use the distance scale and depth of field of the lens itself, or adapter rings with a focus confirmation chip (more expensive).

On an open aperture, there is a noticeable "twisting" in the out-of-focus area, as well as color aberrations in contrasting transitions. Twisting is highly regarded by some users as it gives a photo an extra artistic touch. The bokeh of Helios 44-2 is blurred enough to separate the subject from the background. However, the blur is not complete, and in the bokeh of Helios 44-2 you can see the texture of background objects. It is worth considering this when choosing the compositional component of a future photograph. 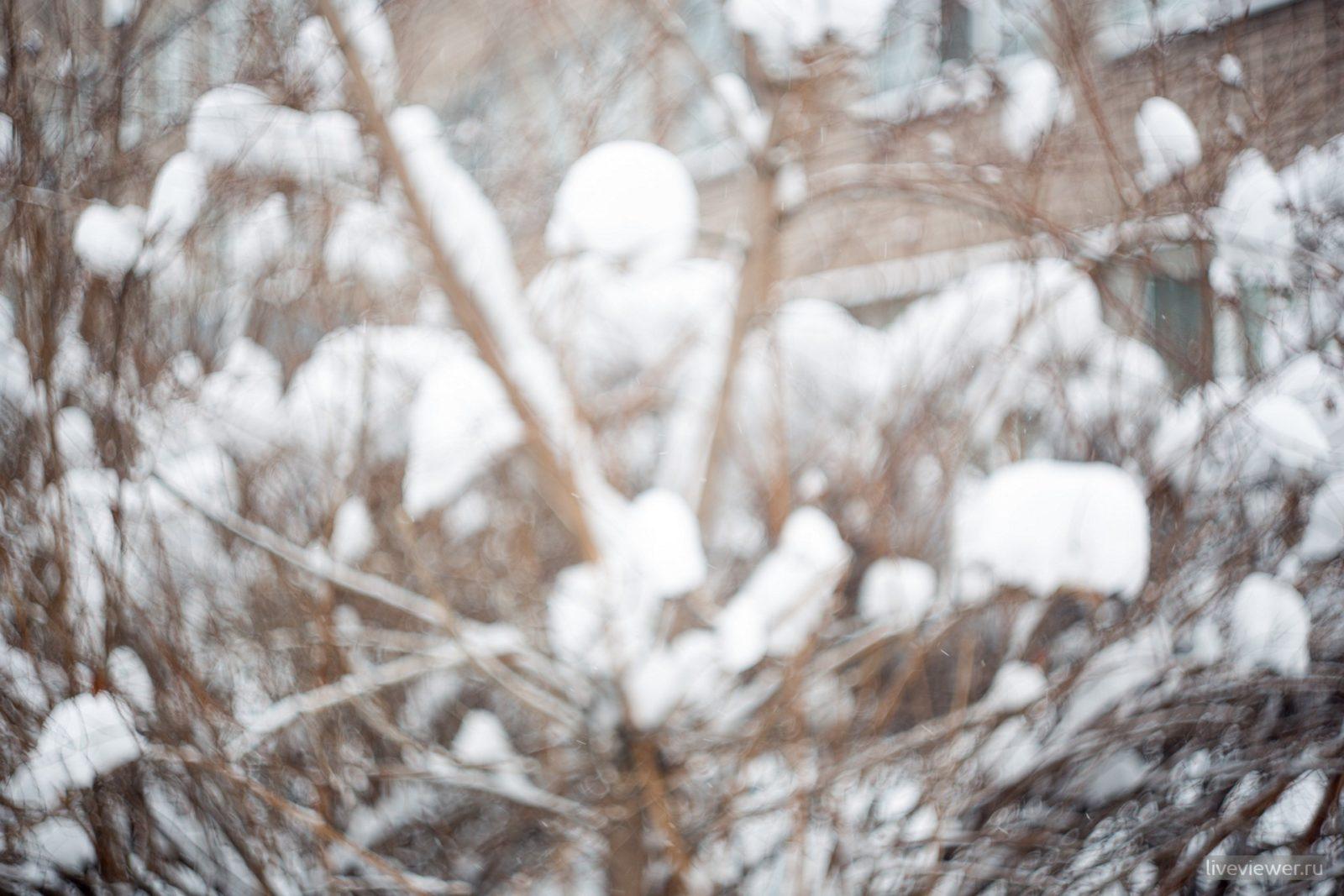 Color aberrations appear as purple or blue lines at the edges of the transitions. Easily cleaned up in photo editors when developing RAW. Coma and distortion are well corrected in "Helios-44-2". 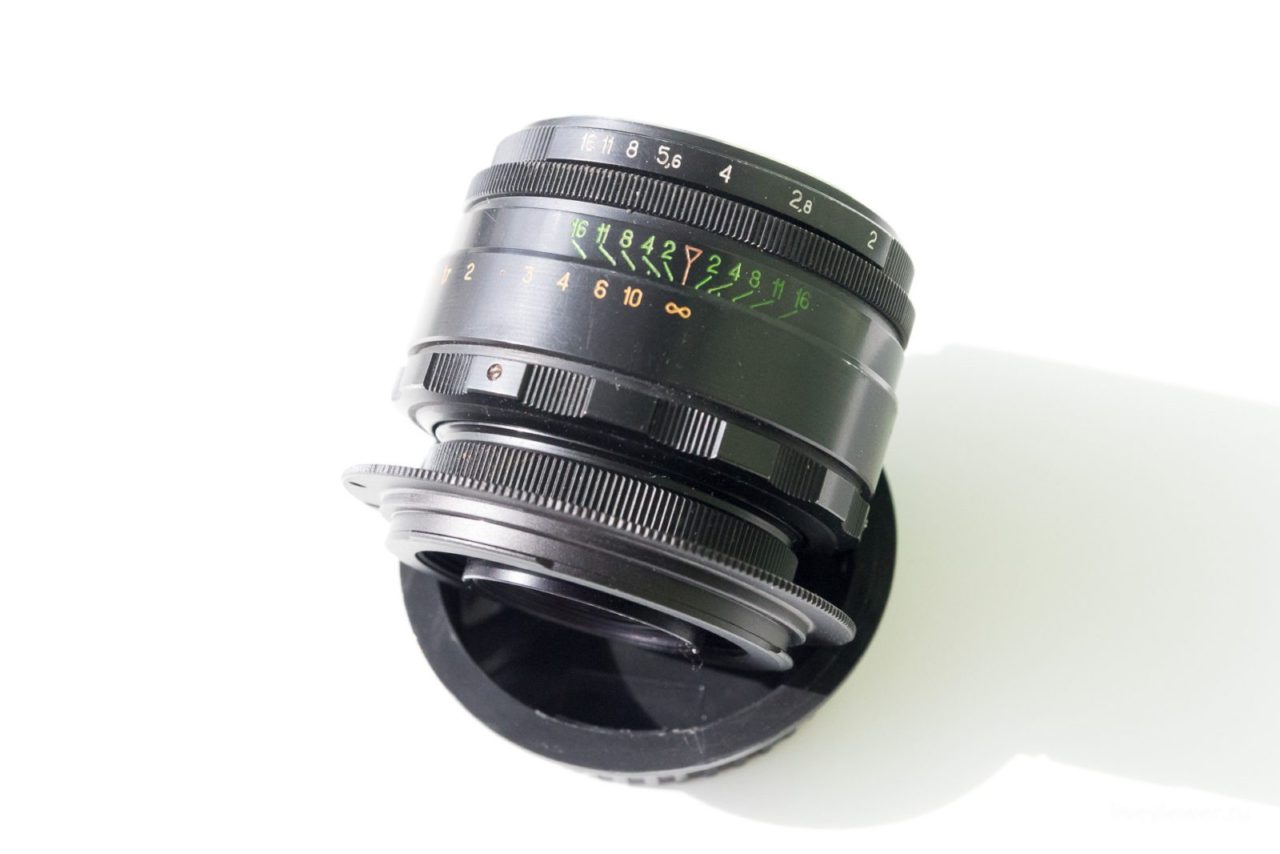 Lens mounted on full-frame cameras produce severe vignetting at the corners up to f / 5.6. On cropped cameras, this effect is almost invisible.

Sharpness in the center is appropriate, at the level of modern lenses, at an open aperture it drops sharply towards the edges. Contrast at lens at a normal level, however, it sags when exposed to light. Shooting without a lens hood (which cannot be found) in backlight and sidelight turns into a real hell. Even though the front lens is recessed into the frame. It's about weak enlightenment. In Helios 44-2, it is simple, has a bluish tint.

The aperture blades, which are usually smeared with a large amount of oil, contribute to additional exposure. The lens is capable of creating reflections from the surfaces of the elements of the optical circuit when light is incident at a certain angle. 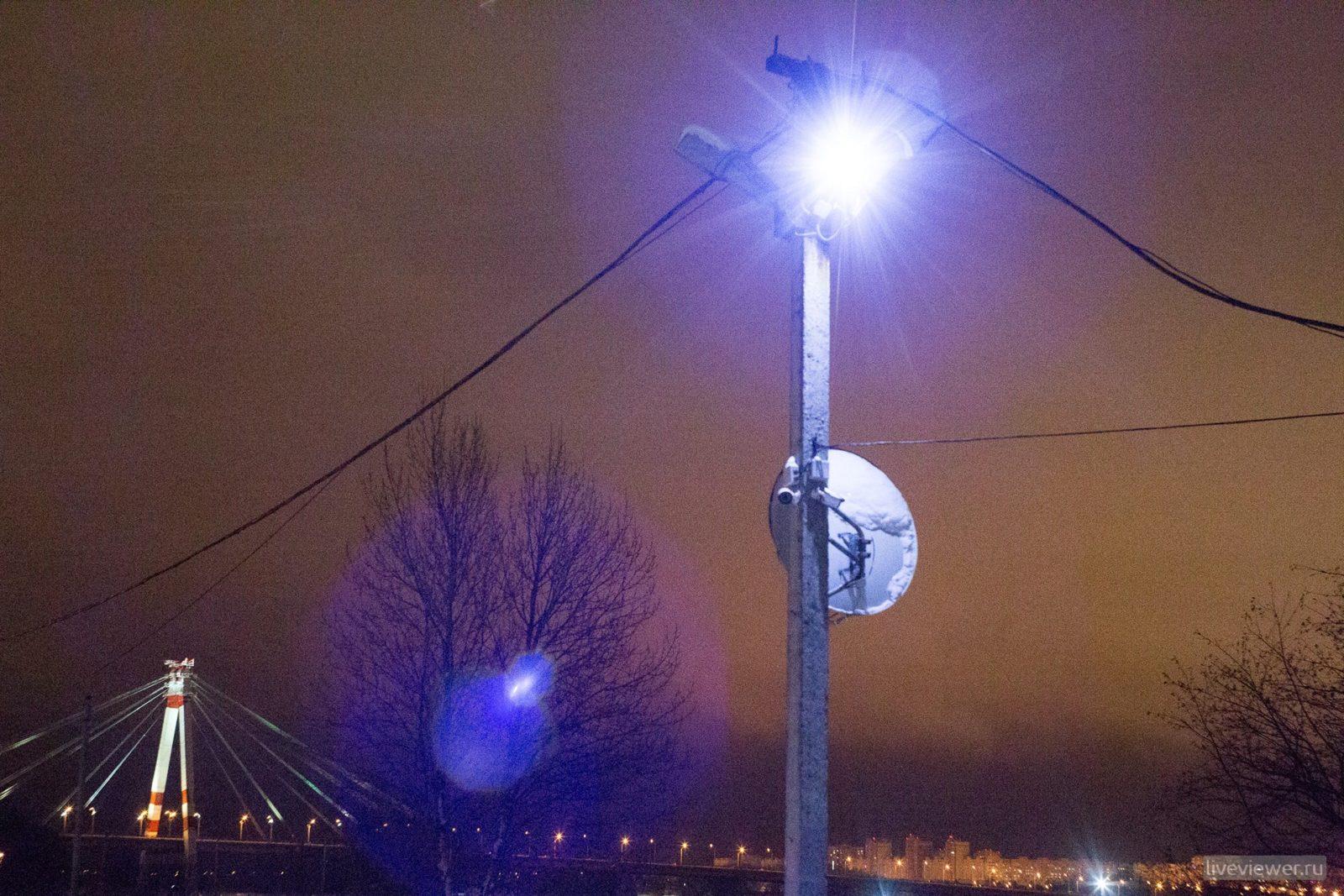 Sharpness lens increases from the center to the edges as you aperture, and at f / 5.6 almost completely covers the area of ​​the frame. At open aperture, the lens swirls the background. Sharpness when open is sufficient only in the center of the frame. The rest of the field draws distortion, decreasing at f / 4 and disappearing at f / 5.6.

Nevertheless, for the most part, frames with lens, "At the exit" is only pleasing to the eye.

Find out the weak points of your Helios in order to avoid knowingly failing compositions.

Helios 44-2 is a great multitude. Of the 20 copies that I came across - only two were in good condition. Nevertheless, even on lenses in good condition, one could notice the play of the aperture rings and its presets. Overall, the build quality is decent. However, when compared with contemporaries from Germany in similar cases, the produced copies of the USSR seem clumsy and ponderous. 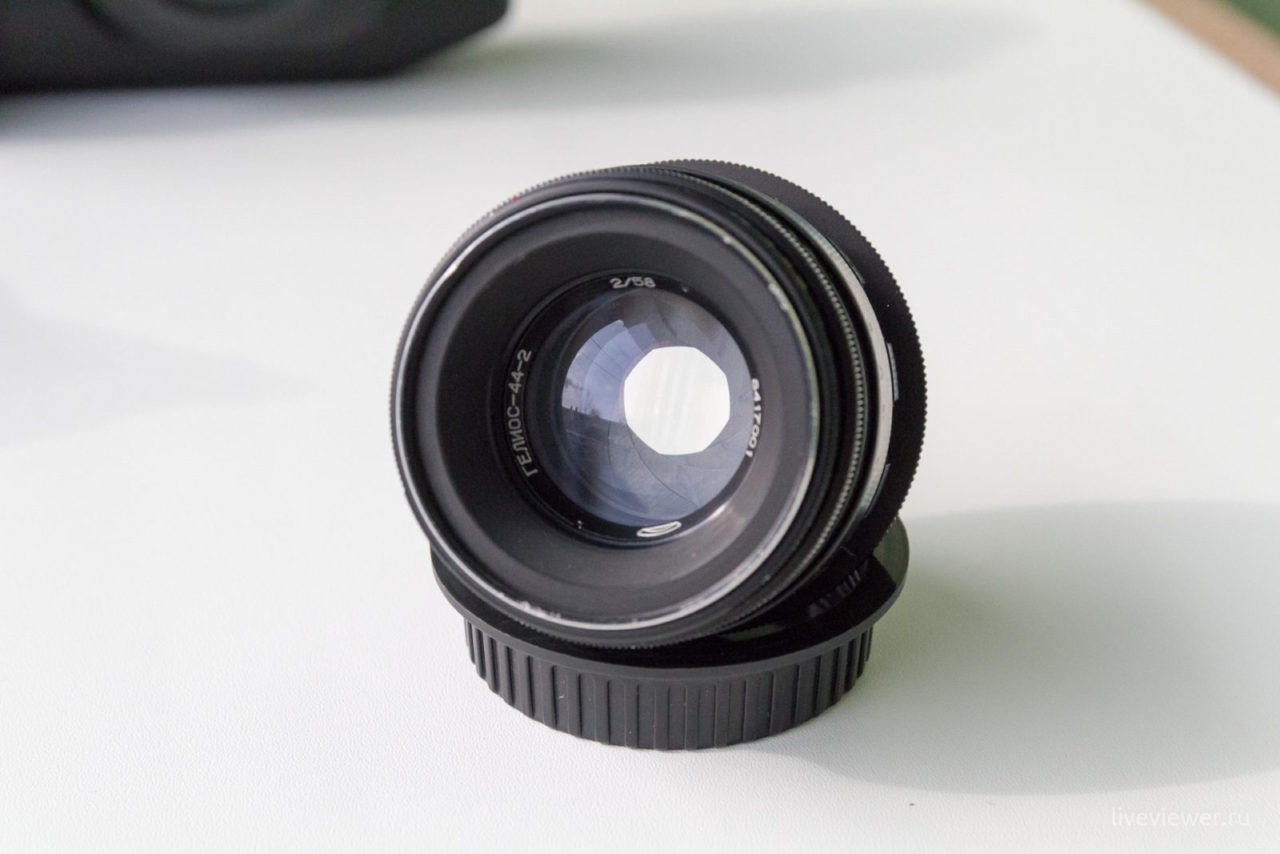 To work on digital cameras, you will need an adapter from the M42x1 threaded connection to your camera. Helios-44-2 is easiest to install on a Canon EOS with an EF (-s) mount, due to the insignificant difference in working lengths. Adapters without focus confirmation chips on Canon cost mere pennies. 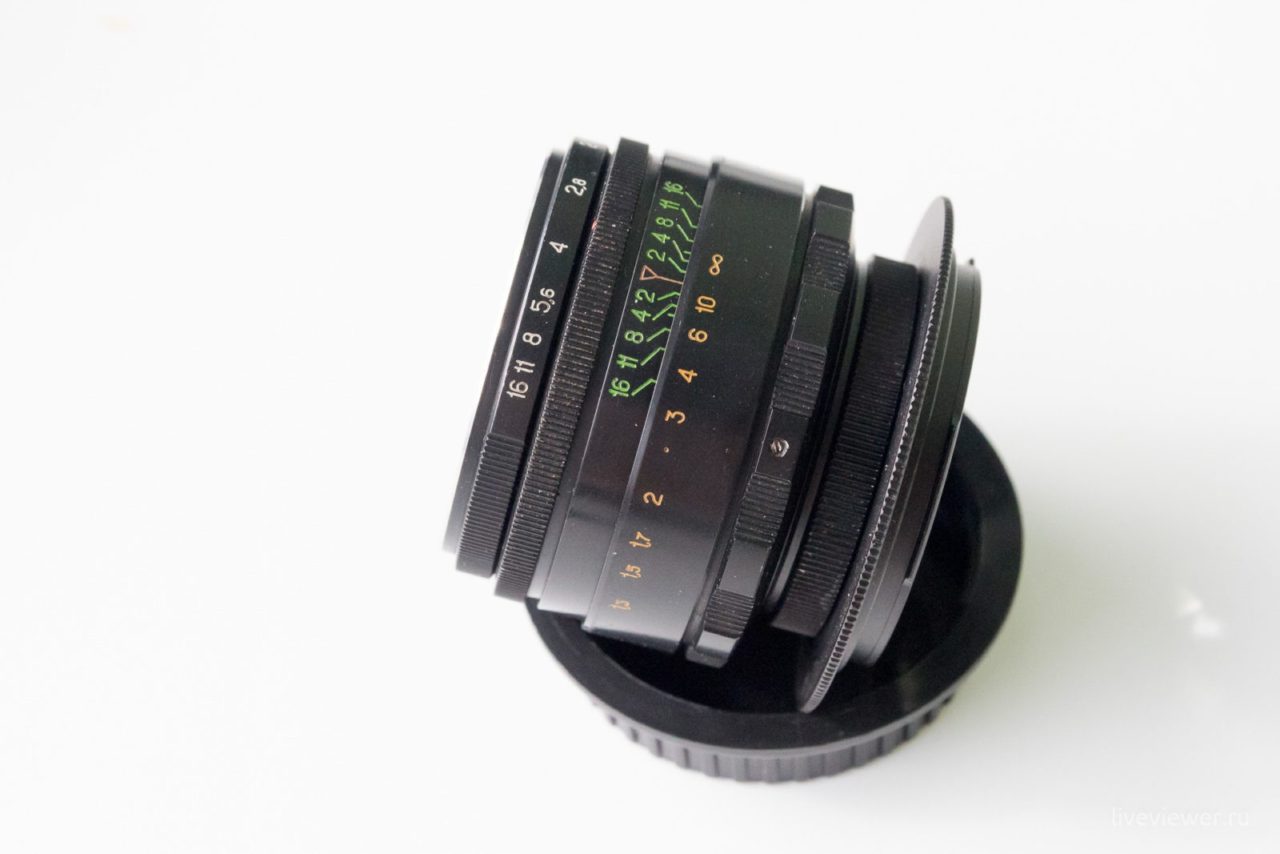 When ordering, it should be borne in mind that cheap adapters of poor quality with a lens on the Nikon F mount significantly spoil the picture. Adapters without a lens reduce the maximum focusing range (due to the difference in focal lengths). Adapters with chips come across poor quality, exposure metering and confirmation of focus on some models of cameras may suffer from this.

Helios 44-2 on a full-frame camera

Has a field of view similar to 58mm standard lens. Vignetting will be observed around the edges of the frame at wide apertures.

Will have a FOV equal to 93mm full frame, FOV closer to the tele-range, but no properties. The vignetting will not be noticeable, the depth of field will increase slightly, and the background blur will decrease insignificantly. All other parameters lens will not get worse.

Helios of older modifications have improved optical characteristics, slightly more resistant to back light. Lenses with multilayer coating slightly exceed the cost of Helios-44-2 and are quite common.

It is a good choice for leisurely shooting portraits with shallow depth of field, as well as artistic background blur.

Examples of photos on Helios 44-2

Despite the sufficient prevalence of the lens associated with its production at several factories, and the mass character, the lens does not show any very negative qualities.

Of course, compared to modern lenses, the lens cannot boast of any improved image quality or usability. However, this is offset by its reliability, unpretentiousness and price. Helios-44-2 are widespread in the secondary market and are quite inexpensive, so they can be perfect for beginner amateur photographers.