FED is a Soviet small-format rangefinder camera, the first model under this brand. In everyday life, it is often called "FED-1" or "FED-Zorkiy", although officially it did not have such an index. The FED is almost an exact copy of the German Leica II camera, which revolutionized photography and photojournalism in general.

The FED camera is a post-war copy of the Leica II.

In 1933, 30 devices with an attached rangefinder (analogue of the Leica I camera) were manually manufactured, but such a FED was not mass-produced. At the same time, the first version of the Pioneer camera of a similar design was manufactured at the VOOMP plant in Leningrad. In April 1934, the first batch of 500 cameras of the same brand was released, which, like the FED, were a copy of the Leica II. In 1934, the release of a copy of "Leica II" under the name "FAG" began at the Moscow plant "Geodesy". The number of cameras assembled is unknown; according to some information, about 100 were made.

Produced by the Kharkov Labor Commune named after Felix Edmundovich Dzerzhinsky, created from former street children by the famous teacher Anton Makarenko. And after the war, it was already the Kharkov production machine-building association "FED". The total production time is from 1934 to 1955.

A large number of variants of this camera were produced under the name "FED" (without a digital index). A version with shutter speeds below 1/20 of a second and an additional control dial (on the front panel of the camera, like on the Leica III, Canon JS and the like) was being prepared for release, but due to the war, production was never launched.

M39 mirrorless rangefinder camera, which has a threaded connection of the same name with contemporaneous lenses. The optics from this camera can be painlessly applied to modern mirrorless digital cameras through adapter with thread M39. Read the article about adapters.

Immediately after the war, the technological equipment of the plant No. 237 of the NKV USSR in Berdsk was transferred to the Kiev plant Arsenal, where the production of the first model, equipped with KMZ lenses, continued. The FED-Arsenal modification is produced in a very small series and is considered a collector's item. In 1946, the production of "FED" was transferred from Kiev to the Krasnogorsk Mechanical Plant, where it continued first under the brand name "FED-Zorky", and then simply "Zorky". FED of the plant them. Felix Edmundovich Dzerzhinsky retained its model name, under which devices of various modifications were produced in the future (FED-2, 3,4,5, 10, etc.)

Most of all questions are raised by the numbering system of FED cameras of the first years of production, which complicates the attribution of individual copies. According to information from V. Suglob's catalog, for the production of some batches, defective lids were used, so the numbering may be repeated.

Had a focal-plane gate with rubberized fabric curtains. Shutter speed set: Z, 1/20, 1/30, 1/40, 1/60, 1/100, 1/200, 1/500 second. The rangefinder and the viewfinder (of the "Albada" type) had different sighting windows; the viewfinder had a magnification of 0,44 ×, the rangefinder had a nominal base of 38 mm and a magnification of 1,0 ×. To charge the camera with photographic film, the bottom cover was removed, both standard cassettes and two-cylinder ones with a wide opening opening were used. Syncro contact and self-timer are absent.

Special edition cameras were presented to especially distinguished civil servants. Since 1955 cameras the FED and Zorky lines began their independent development. From the mid-30s to the beginning of the 40s of the twentieth century, about 160 thousand copies of the camera were collected. The total volume of the issue was about a million copies. 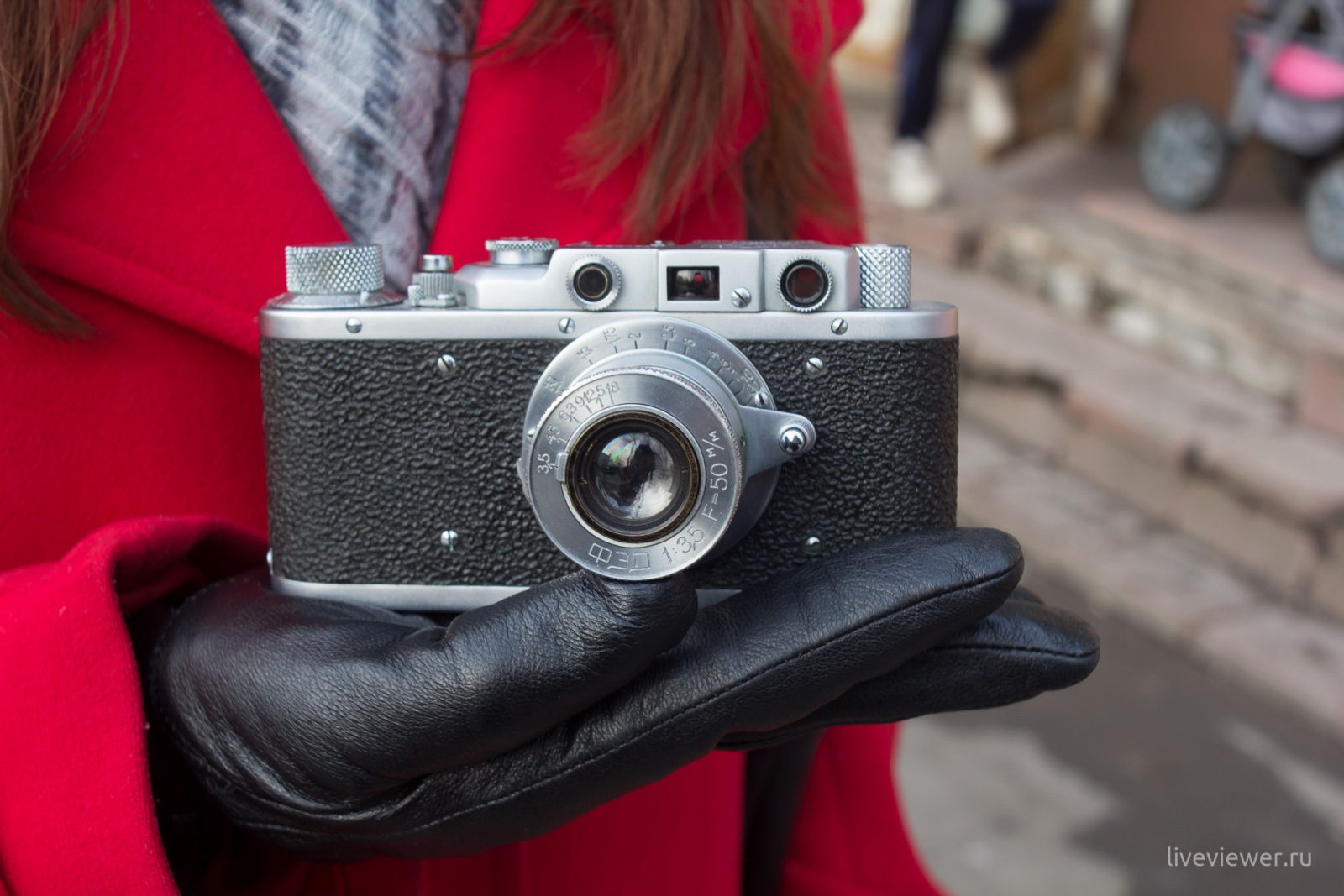 Under the screw on the front of the top cover, there is an adjustment hole for the rangefinder. There is no self-timer, the film is wound into the spool by switching the shutdown lever shutter and turning the rewind knob clockwise. 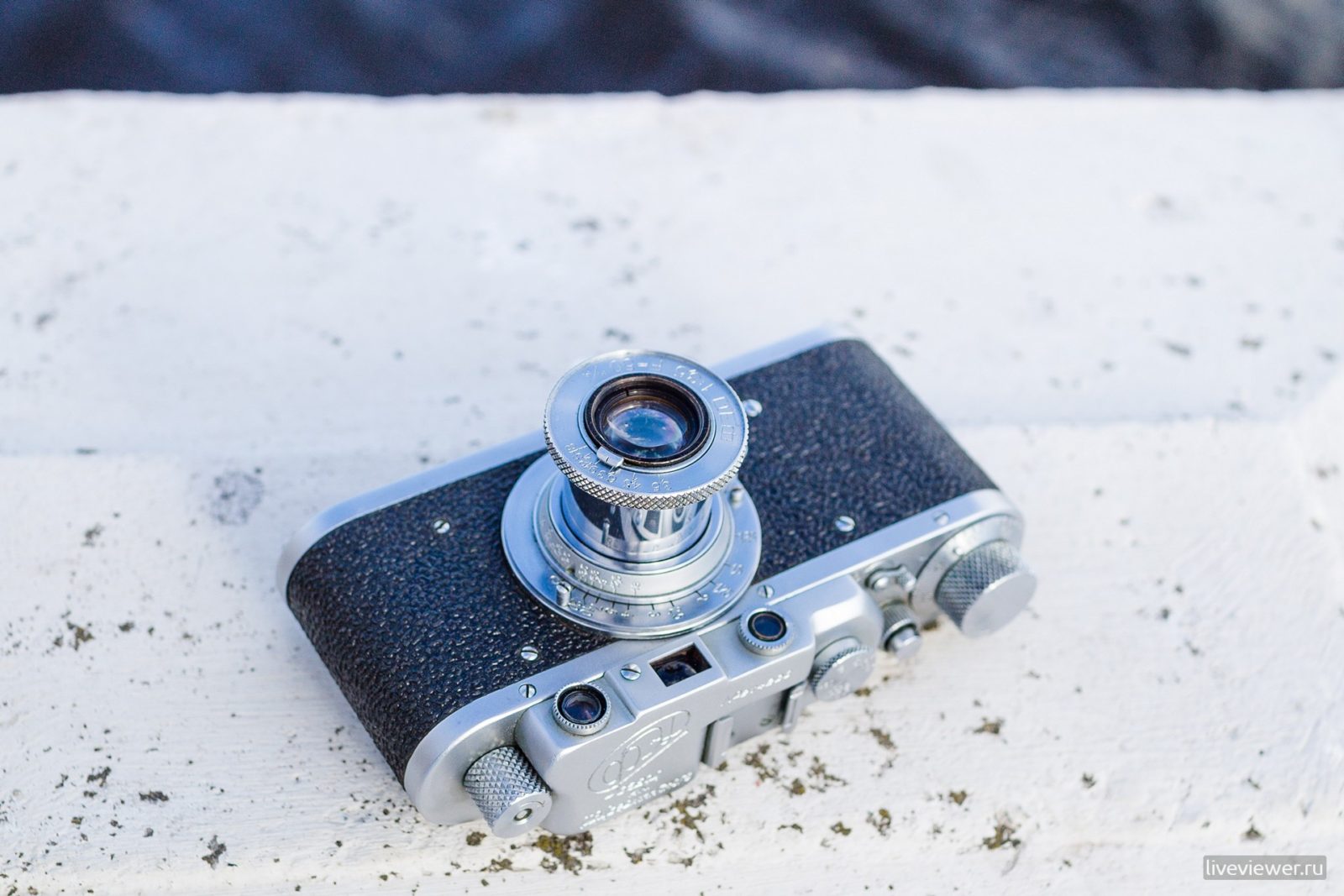 The shutter works quietly at any shutter speed - there is no vibration, the sound of the shutter is heard directly only near the device. 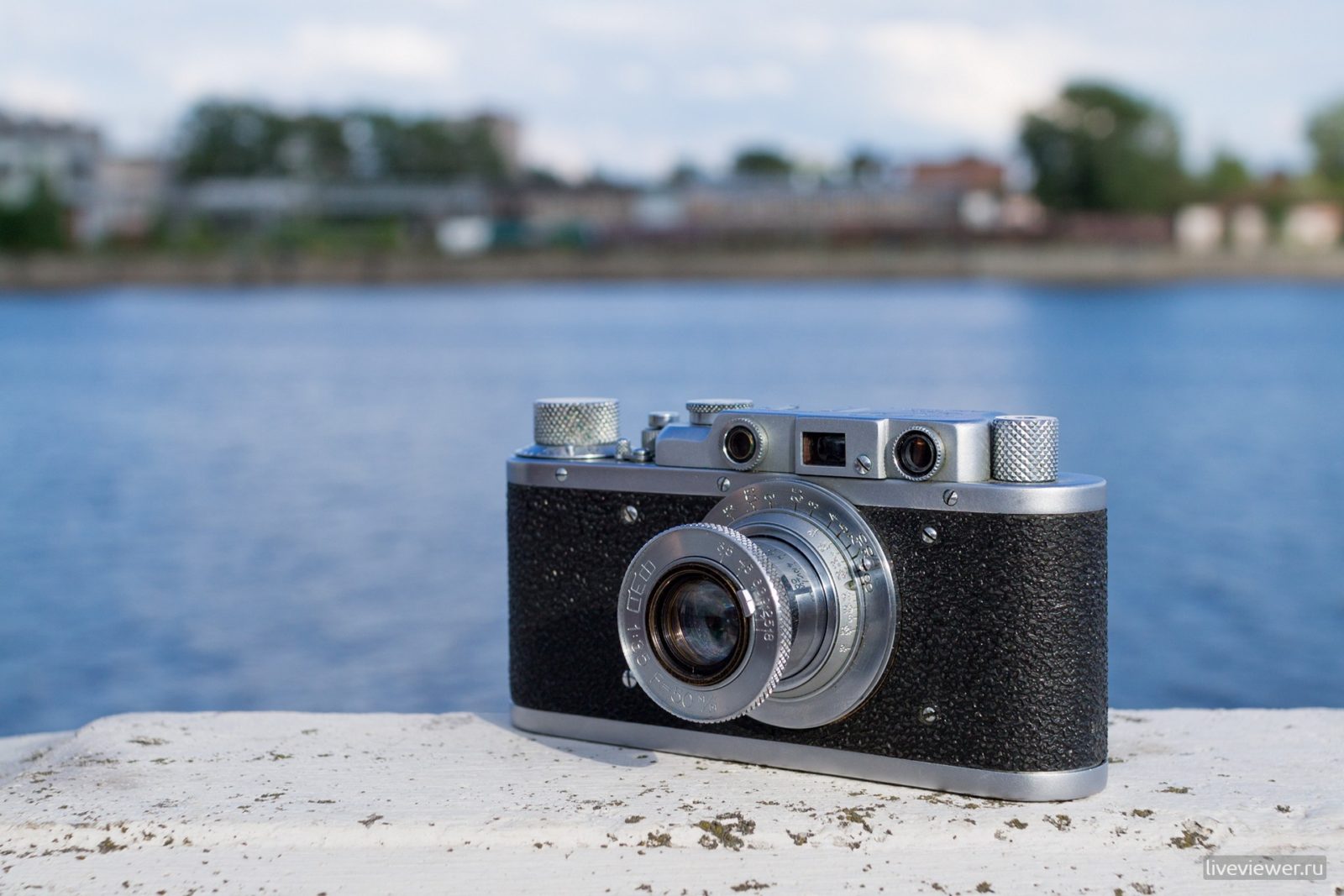 With the lens folded, the camera fits freely in a trouser pocket and does not cause any inconvenience during transportation.

Management is carried out with two hands. We hold the camera with one hand and press the shutter button, with the other hand we adjust the sharpness setting on the rangefinder window. The viewfinder is small enough and spaced apart from the rangefinder. There is a yellow spot in the rangefinder window, in which the image is doubled. Sharpness focusing is performed when the image in the rangefinder window is sharp. Has a regular magnification for better aiming. A copy of the FED with the serial number 214293 does not have a "fungus" under the finger at the shutter button, and also has several cosmetic differences from cameras released later. In particular, it is equipped with a "ley" set of shutter speeds; and the number is indicated on the cover, behind the accessory mounting shoe. According to the catalog of V. Sugloba it belongs to "FED-1 Model group VI Modification 1 Issue 1": 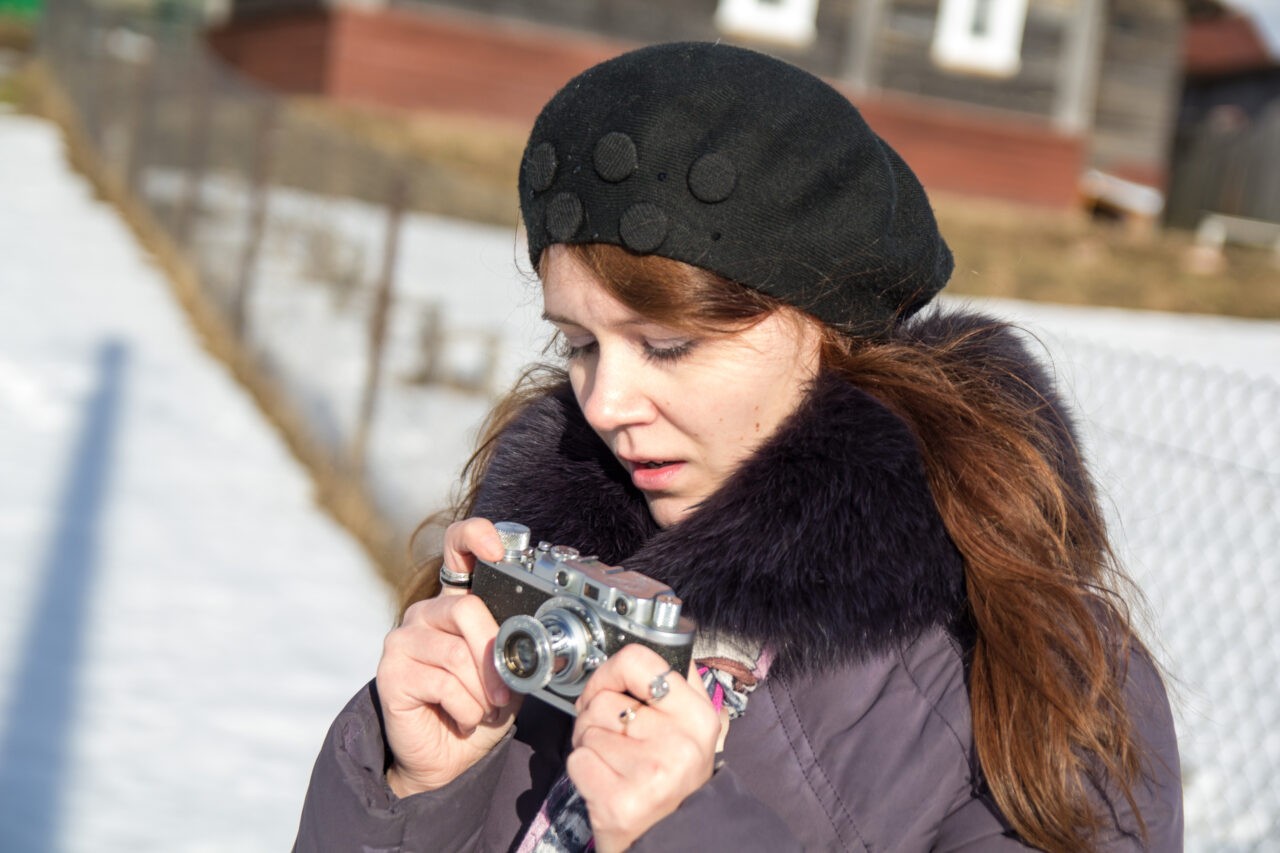 After a while, I lost my temper again and got myself a FED. I really like these cameras, despite their deep antiquity and inconvenience to use. The main difficulties in working with such cameras:

In more recent models of FED cameras, manufacturers have more or less successfully overcome these ailments. There was also a removable back cover for easy loading of the film, crossed a viewfinder with a rangefinder, and also introduced an exposure meter. Unfortunately, the light meters built into the cameras turned out to be not very tenacious, and in 2021 it is not trivial to find a rangefinder camera with a live exposure calculator. It's all the fault of physics, multiplied by time. Selenium photosensitive plates degrade. However, now you can install an exposure calculator program on your smartphone, and not go with a reminder, but measure the light level on the fly. Just like in those days when it was possible to buy an external exposure meter, of which there were in abundance.

The working distance was standardized even in the post-war FED of the first models, but purchasing such cameras, nevertheless, there is a certain share of risk that a misaligned camera-lens pair will come across. It's not even a matter of millimeters, but of their fractions - the lens and the camera with the rangefinder must clearly correspond to each other. However, when installing FED or Industar-10 (Industar-22) lenses on a mirrorless camera through an adapter, the lens will behave like a normal manual fix.

Body cover is dark brown, closer to black, vulcanized coating. The shutter is still quiet, the camera has no differences in terms of ergonomics. Purchased together with a leather case, which is tired from time to time, but still smells the same, old-fashioned.

FED-1 1955 - the last modification of production before the start of production of the camera "FED-2". There is a review of several lenses from FEDA, and an earlier release camera:

You can also read the review about camera "MIR" - further development of the FED-Zorky rangefinder camera line. 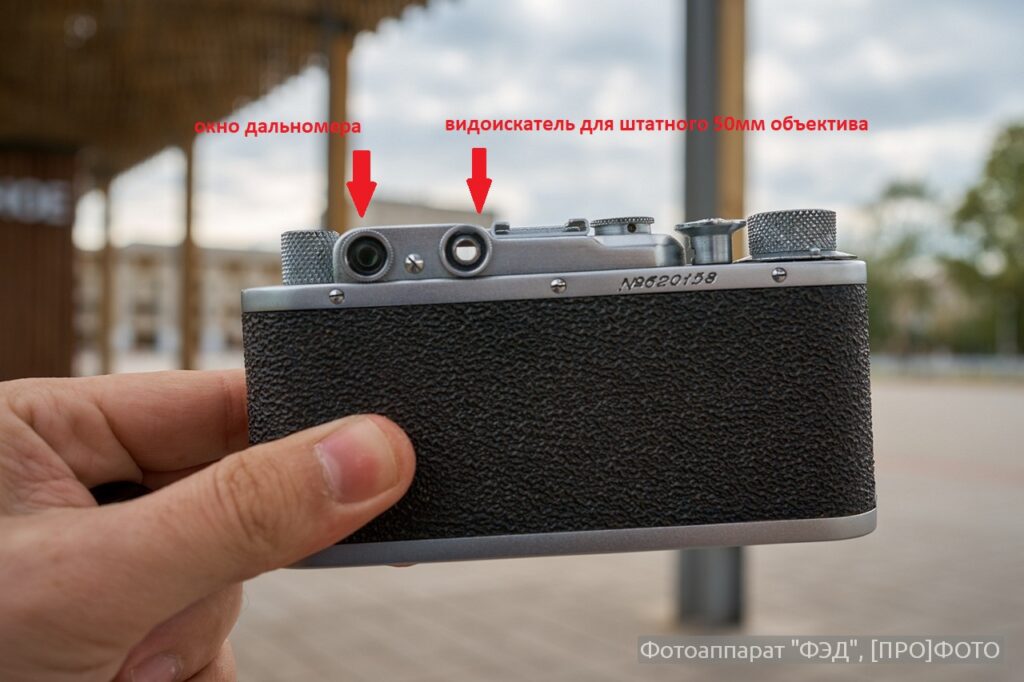 The procedure for working with the camera is as follows:

The threads on these cameras are for old tripods, and for installation on modern ones, you need to purchase an adapter. Of course, I would like a richer set of shutter speeds, and longer ones, and 1/1000. Self-timer would be nice. But no. Thank you for the later appeared a notch for the cable in the release button.

In general, the camera looks interesting and unusual. Such an ersatz watering can. The inconvenience in working with this camera is as follows:

The lens is very sharp. And it gives good image quality. There is a review of several lenses from FEDA, and a FED-NKVD camera:

You can also read the review about Camera "MIR" - further development of the FED-Zorky rangefinder camera line.

What kind of film is needed for a FED camera?

Any 135 type (35mm) film in standard spools is suitable for FED cameras. You can use both black and white and color, you can wind the film yourself. A budget hobbyist color film from Fujifilm or Kodak, black and white Tasma, works well. Films c ISO 400 are suitable for low light conditions, and on films with ISO 200 is best for shooting outdoors in clear or slightly cloudy weather. Examples of photos on film can be viewed here.

Operation of the camera shutter FED

How to insert a film into a FED

How to remove a film from a FED

In the meantime, I go and slowly shoot my first film on a new camera, I propose to look at the photos from the previous one, taken for an overdue Konica VX. Photos with more or less adequate color rendition are color corrected in Photoshop. Falling into the blue is a typical expired Konica. The same filter that we deserve. For this delay, it is advisable to shoot destruction and abandonment in a low key, and sad faces against the background of dirty gray houses.

The FED, like the first "Sharp" ones, is a very beautiful, inexpensive vintage camera. Similar to the Leica ii, but unlike it, it is very common in the territory of the former USSR. Worthy both for use and for a small collection. You can read about the varieties of the FED camera in the catalog "1200 cameras of the USSR":