The Pentacon Electric 2.8 / 29 is a reborn and slightly more "advanced" Meyer-Optik Orestegor 29mm f2.8, produced in the GDR at the factories of the VEB Pentacon conglomerate in the 80s of the 20th century.

Pentacon 2.8 / 29 is a lens for SLR cameras with an M42 threaded connection. Applies to wide angle lenses. The progenitor of the lens is a proprietary bicyclic zebra Meyer-Optik, the full name of the "old man" - Meyer-Optik Orestegon 2.8/29. The Pentacon 2.8/29 is a refurbished and slightly finished Orestegon lens. Due to their compromise design and value for money, the Orestegon Pentacon 2.8/29 were the most popular secondary wide-angle interchangeable lenses in the future. 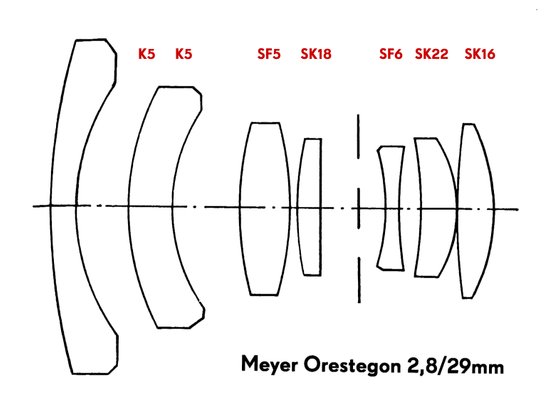 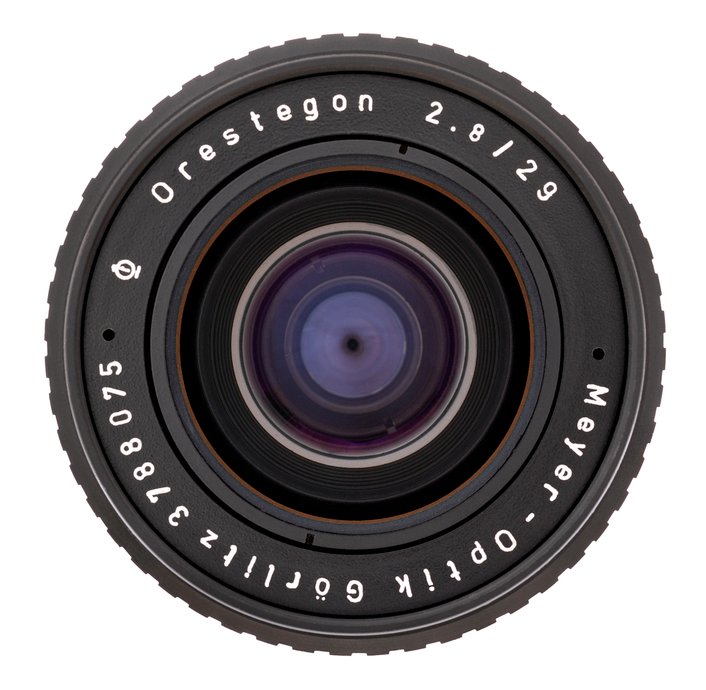 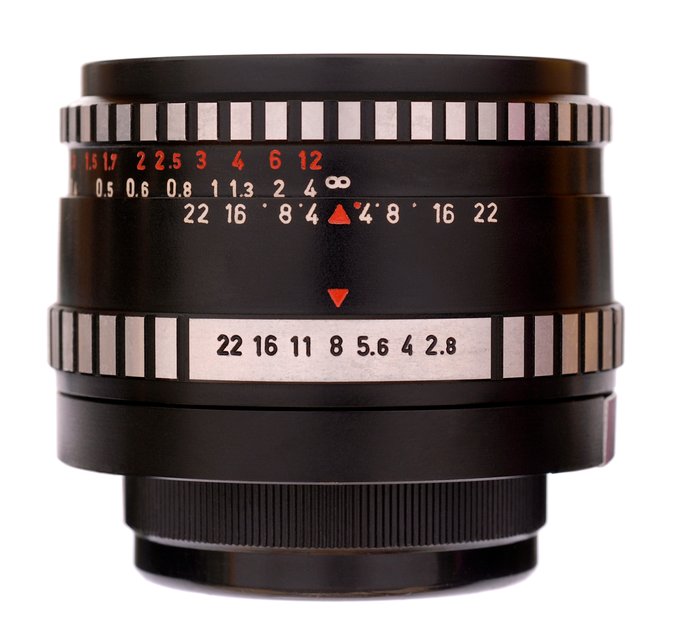 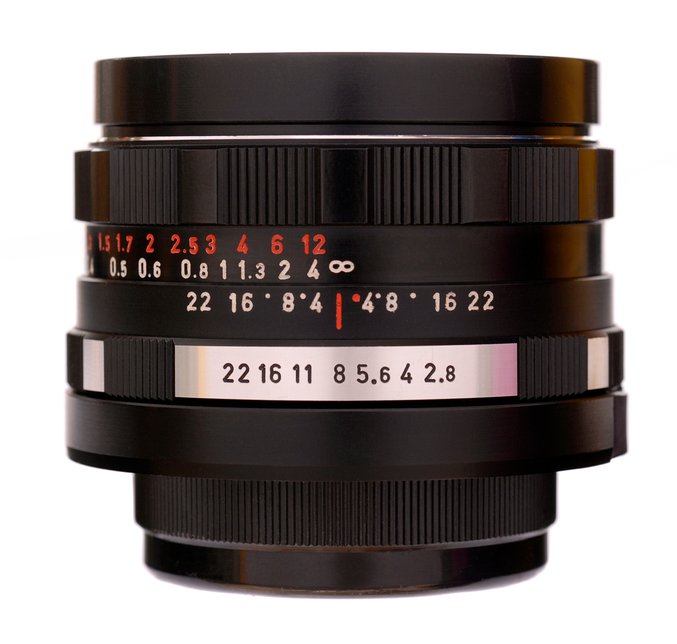 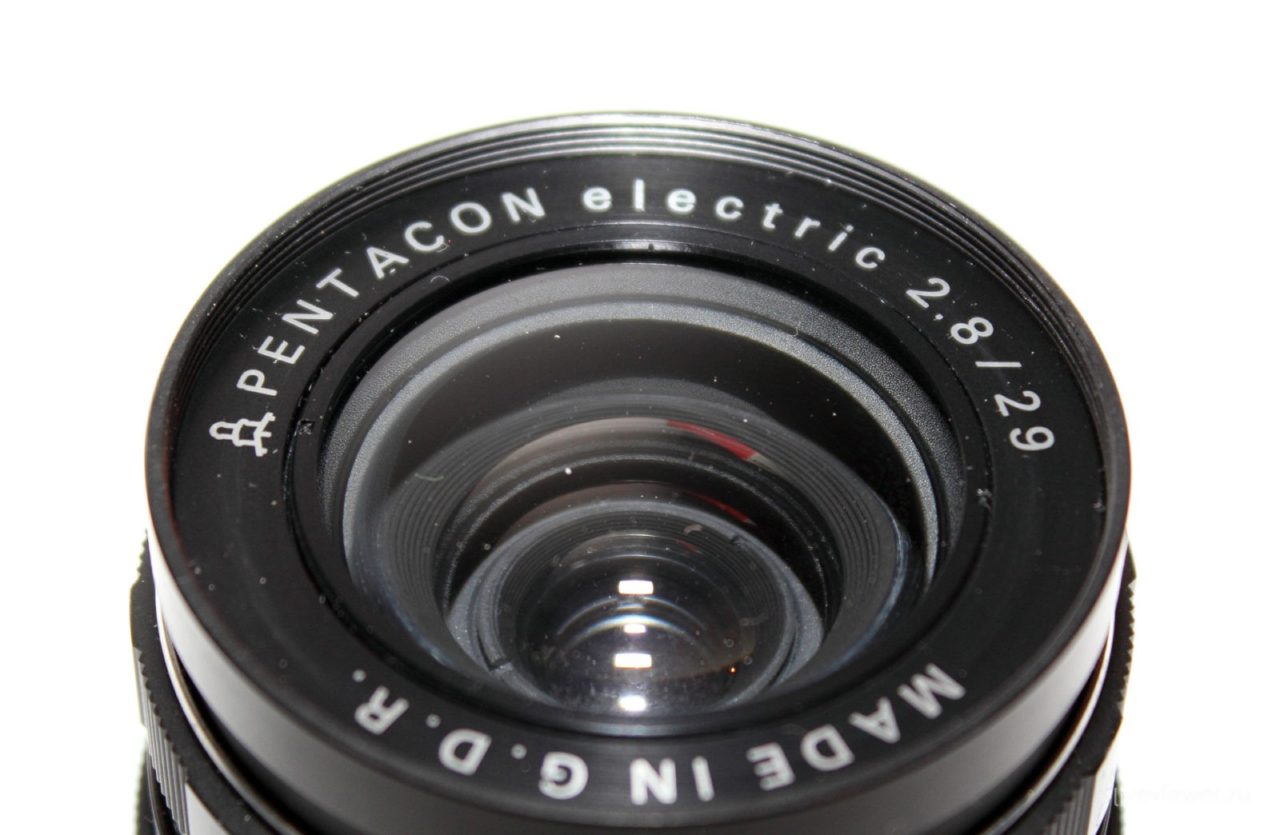 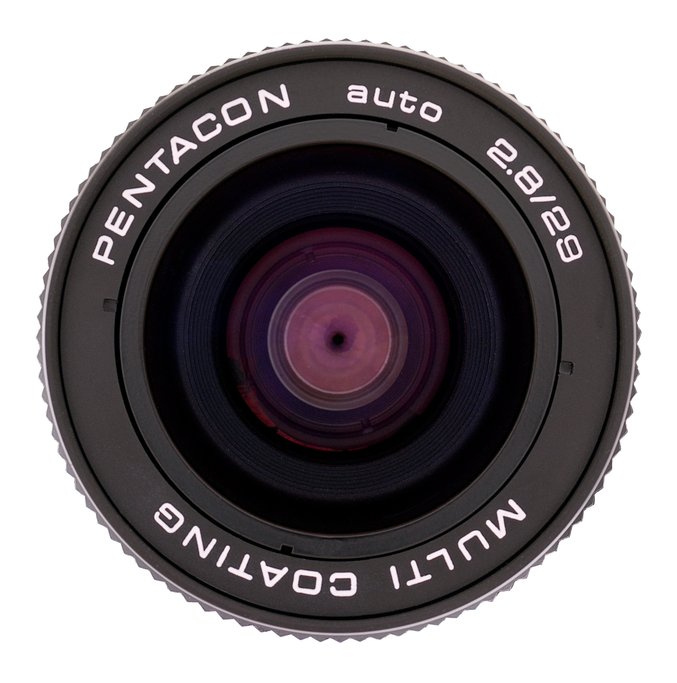 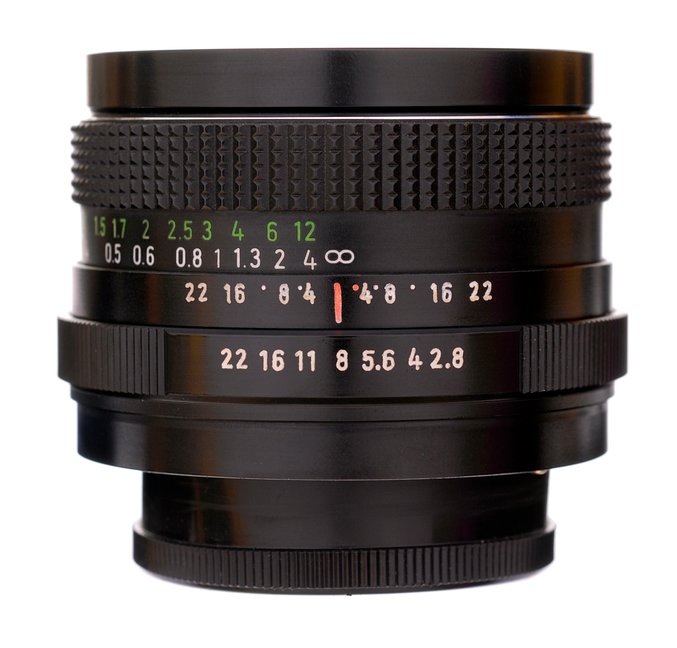 Since the 1980s, production has been deployed in Romania at IOR Bucharest. Transitional options could be performed in old cases with already implemented changes in circuits and mechanisms. Orestegon's VEB Feinoptics Werk patent specifications often stated that lenses should cost as little as possible while still having good performance. Hubert Ulbrich designed his Orestegon in such a way that the two prominent menisci, which eventually had the largest diameter in the lens, had to be made of inexpensive K5 crown glass.

Most of the photographic products in the GDR after 1961* were produced by the Pentacon conglomerate under the corresponding brand. In parallel with the release of the Praktica L series, the previous, so-called "zebra" design was abandoned. The lens has received more advanced processing of the focus and aperture rings in terms of tactile sensations. It is more convenient to work with gloves with such rings (both nut-like and knurled) than with a zebra.

An intermediate version followed about five or six years later, featuring the distinctive recessed grips with longitudinal notches on the rings that could be seen in the lenses of some Japanese companies such as Canon, Pentax and Konica of the late 1960s. While the German photography industry was mass-producing zebra lenses, Dresden and Görlitz began to disguise optics as designs from Japanese manufacturers. During the same period, Orestegon and Pentacon 2.8/29 were released in the version for Exakta RTL. The retail price of this version of the Pentacon 2.8/29 was also 213 marks.

Two improvements took place during the 1970s: first, the push diaphragm mechanism was redesigned to make it easier and cheaper to manufacture. Secondly, an external feature was the replacement of the depth-of-field preview button with the Auto-Manual slider. It was now possible to permanently disable auto iris and turn it into a simple iris. Now these lenses could also be used on cameras without an automatic aperture (Praktica FX, Zenith, modern digital cameras).

I first got acquainted with this glass in 2012 and was pleasantly surprised by the color of this lens in the original. Very high quality reproduction of halftones, colors and shadows, as well as contrast.

The Pentacon Electric 2.8/29 case type is the first post-zebra restyled series. With this design released and Pentacon auto 50mm f1.8 m42, and some other lenses. The lens block protrudes forward when focusing. 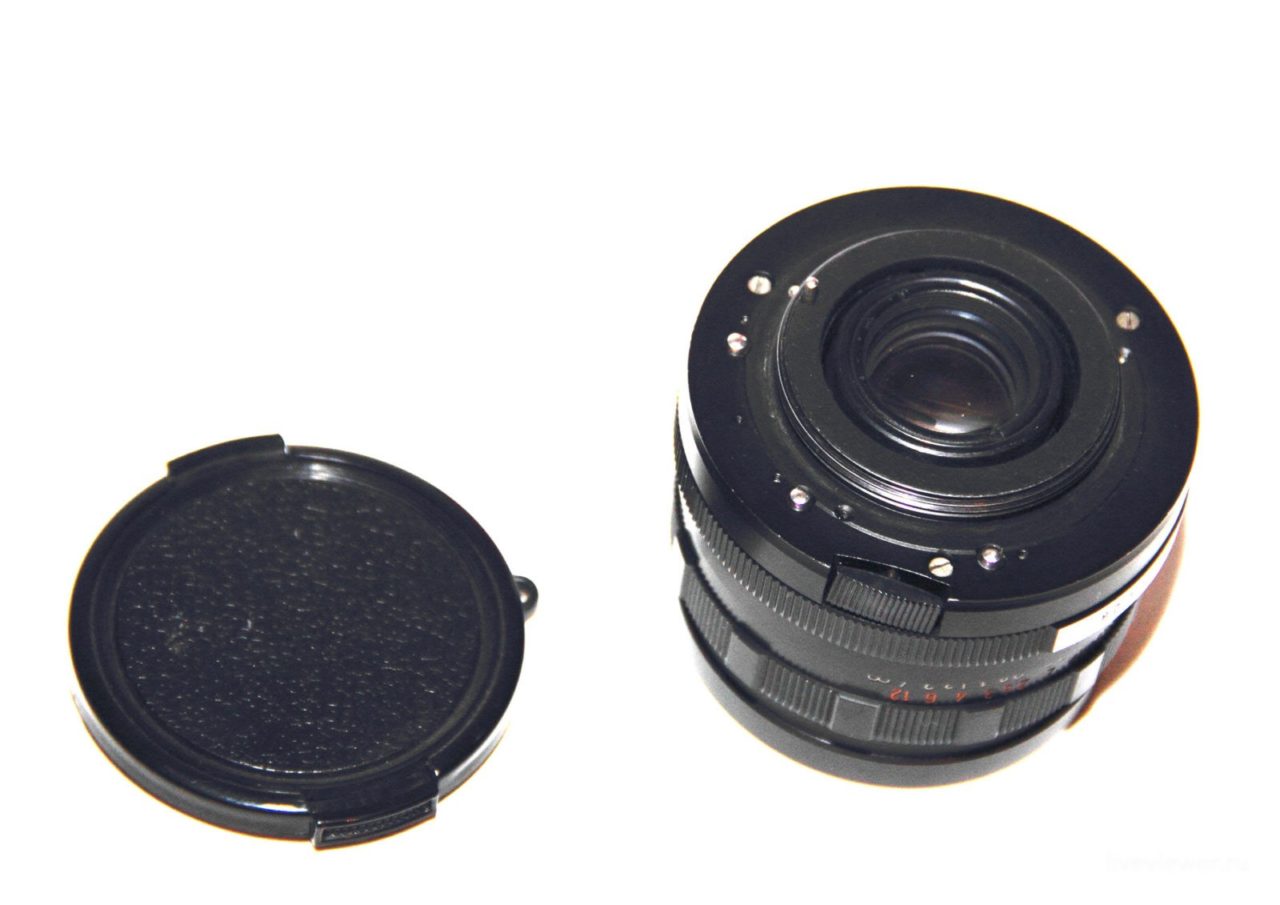 The current aperture value was transmitted to the camera through the contacts, and the electronics already used this data to correctly expose the frame in semi-automatic mode. The performance of the German is, as always, on top. Lightweight, cute. On the front cover of the Pentacon Electric 2.8 / 29, the inscription “Made in GDR” proudly flaunts.

The thread of the connection is m42, the lens fits onto the digital camera without any problems through the adapter. The diameter of the thread for light filters is 55mm. The body is marked with the values ​​of the focusing distance, the scale for calculating the hyperfocal distance and the aperture value. Focusing distance is duplicated in metric and imperial measurement systems. 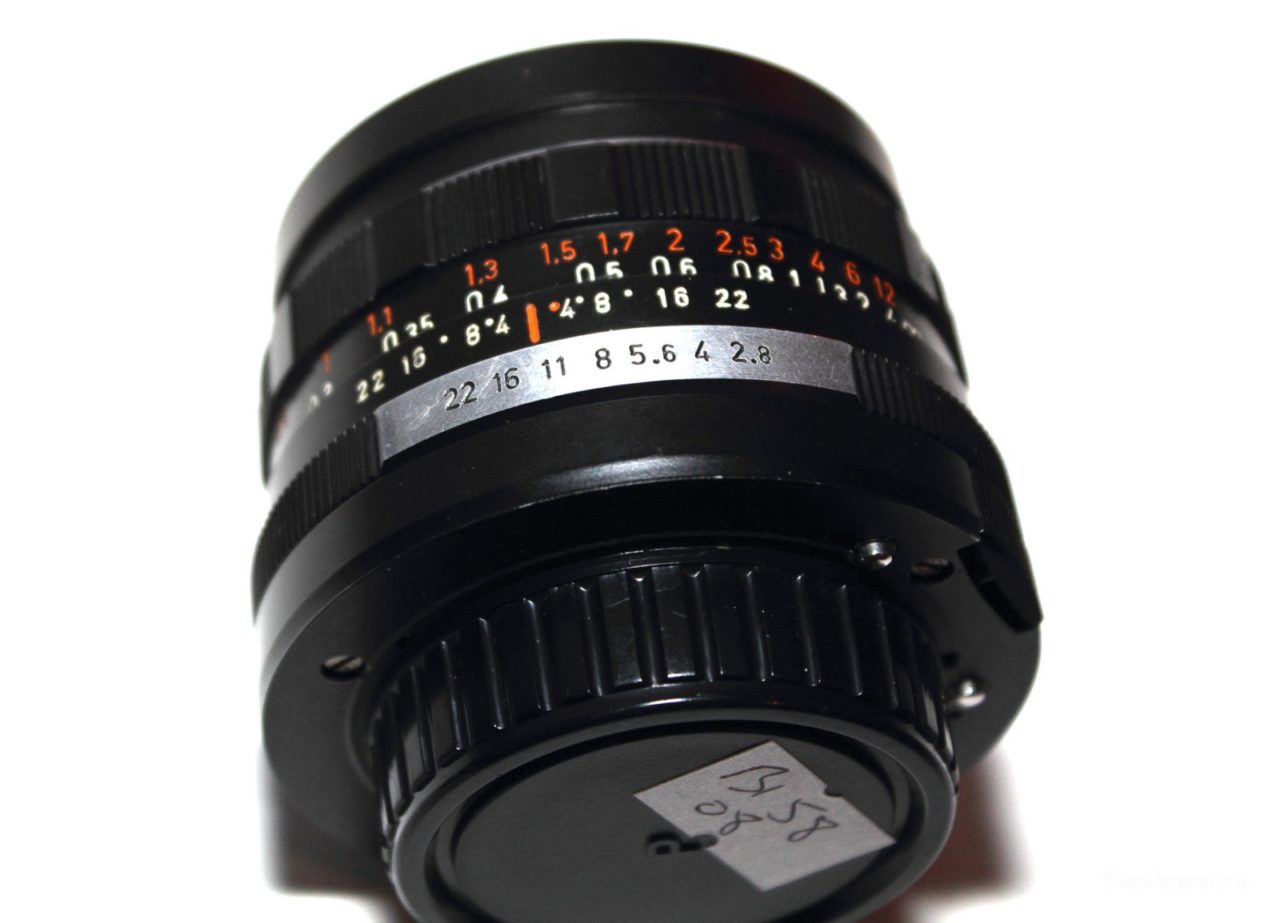 Aperture and depth of field

The aperture at the covered values ​​draws "nuts" in hips due to the small number of aperture blades. The Pentacon Electric 29mm f2.8 is very sharp starting at f3.2. The diaphragm can also be adjusted to intermediate values; the ring has a retainer from the inside. At a certain angle, noticeable distortion can be captured. 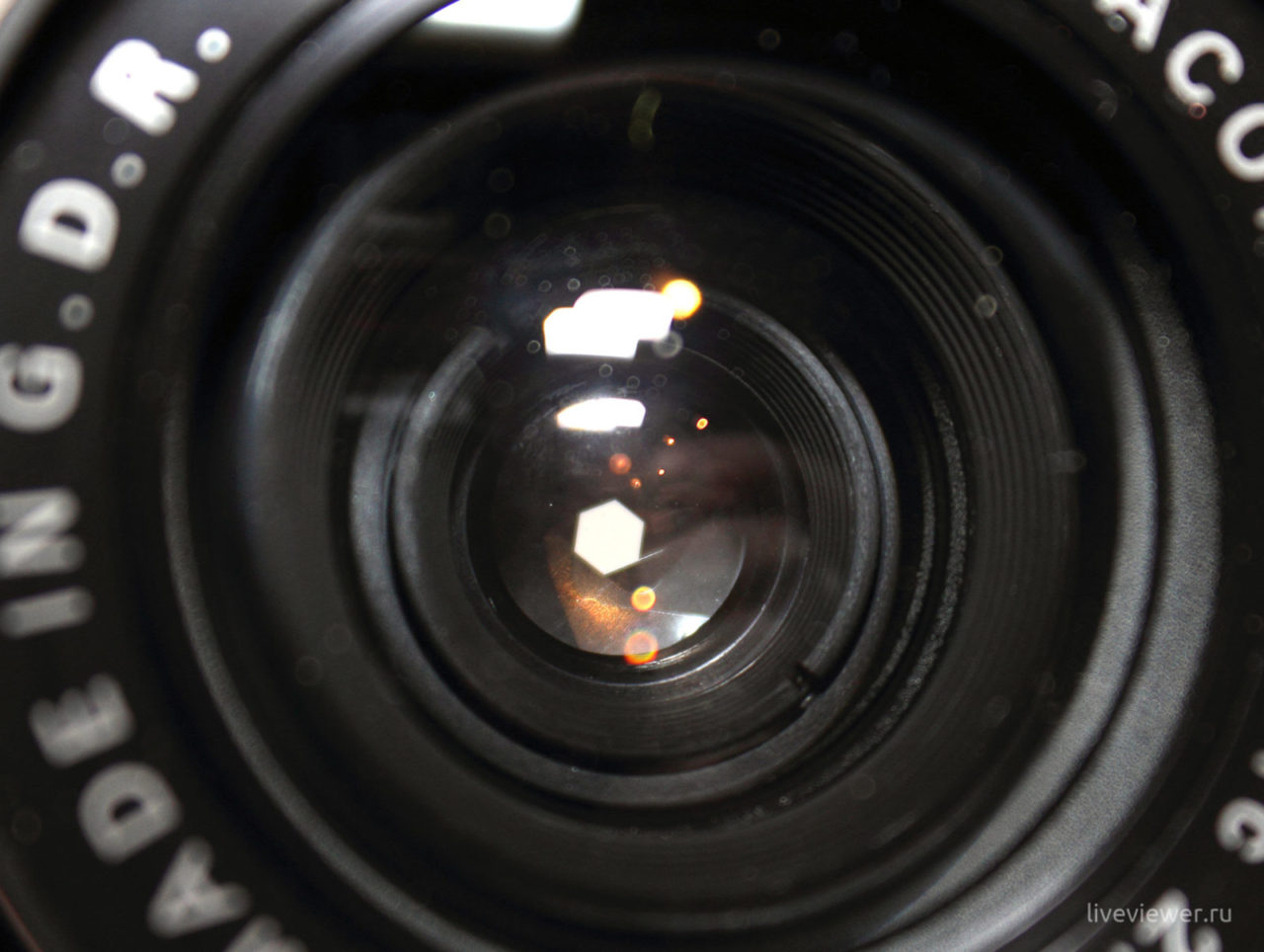 Photo tinting "under the film" is already built in from the factory. Has a good, but I would say, a special color rendition. Excellent macro shots, thanks to a minimum focusing distance of 25 centimeters. Photos in nature, in the forest, and in good light are amazing.

Unlike the previous variation (zebra), the cases have become more progressive, but the same optical quality as before. Blockages of vertical lines are present, but they have, how to say it ... "correct" character. The front lens fits close to the frame, so the lens hood will not interfere with this glass (thread diameter 55mm). The aperture blades are well blackened, which saves from reflections when closing the aperture. The lens is very sharp already at an open aperture, in this situation it also has a slight vignetting (see examples). As a budget wide Pentacon auto 29mm f/2.8 Multi Coating will be indispensable on a hike, as it weighs little and takes up little space.

Canon 60D, the lens was mounted on the camera using the M42-EF adapter.

In the second half of the 1970s, multilayer coating was introduced. With seven discrete lenses that inevitably entailed 14 glass-to-air transitions, the three-layer anti-reflective coating really made a tangible impact on this lens. On the one hand, the light transmission could now be increased to more than 90 percent, on the other hand, this light, which was literally pushed through the glass, could no longer cause reflections due to scattering or reduce the contrast of the image. A real gain, which, unlike lenses with only three or four lens groups, was really noticeable in practice.

The Pentacon Electric 2.8/29 MC and MC Pentacon auto 29mm f/2.8 are the continuation of a series of lenses updated to match the entire line of Pentacon lenses in the 80s. The updated design in the 80s eliminated the possibility of meeting lenses without multi-coated.

This lens is installed on modern SLR and mirrorless cameras through the appropriate adapter. Read the article about adapters. On a camera with an APS-C (kf=1.6) sensor, the camera will have a field of view equal to the equivalent of 46mm focal length, and the aperture will correspond to f/4,5. Unlike many older lenses, Pentacon 29 can be used on cameras with small matrices with a crop factor of up to 1,5 inclusive.

The easiest way to shoot is in the mode Aperture Priority (Av)when the camera adjusts the required shutter speed based on the current aperture value and the light in the frame. To work on digital cameras, you need an adapter from the M42x1 threaded connection to your camera. Pentacon Electric 2.8 / 29 it is easiest to put on Canon EOS with EF (-s) mount, due to the insignificant difference in focal lengths. Adapters without focus confirmation chips on Canon are cheap.

The Pentacon 2.8/29 remained available for several more years after the reunification of the GDR and the FRG. This could either be because its production, at least in part, took place in Romania in the 1980s, and IOR Bucharest was not as directly affected by the fall of the Iron Curtain as Görlitz. It is possible that there were large balances in the warehouse, which were offered for sale for a long time after the reunification. The last price was about 130 Marks according to "Photoshop Kauführer 1994".

The Pentacon 2.8/29 was once tested by the Kauführer Photomagazine after the reunification of the GDR and the FRG [Issue 7/92, p. 70]. Barnim A. Schulze attested to the "no longer very fresh design" and eventually concluded, "It's not really modern at all." In practice, Orestegon or Pentacon 2.8/29mm are much better than their reputation.

For Soviet photographers - a dream, for beginner videographers of our time - just a godsend. It is impossible not to fall in love with this lens - it is good in all respects. With the exception of early versions, the absence of a diaphragm drive lock. But with the use of adapters with a flange, this minor drawback is leveled.

It is valued in the secondary market, the average price tag is 3200 rubles. Personally, I was surprised by the build quality, as well as the image quality. I advise everyone who wants to try manual optics, but does not know where to start. Together with a wide angle, the lens has every chance of becoming glass for every day, especially for street photography.