I-61 (Industar-61) L / D is another victim of technological progress - along with Soviet film rangefinder cameras, it also remained out of work.

Шtatny lens for rangefinder cameras FED. This lens is installed on modern SLR and mirrorless cameras through the appropriate adapter. Read the article about adapters. Had a focal length of 53 and 55 mm, respectively, was marked as

Also occurs with a bunch of other variations in the name, such as 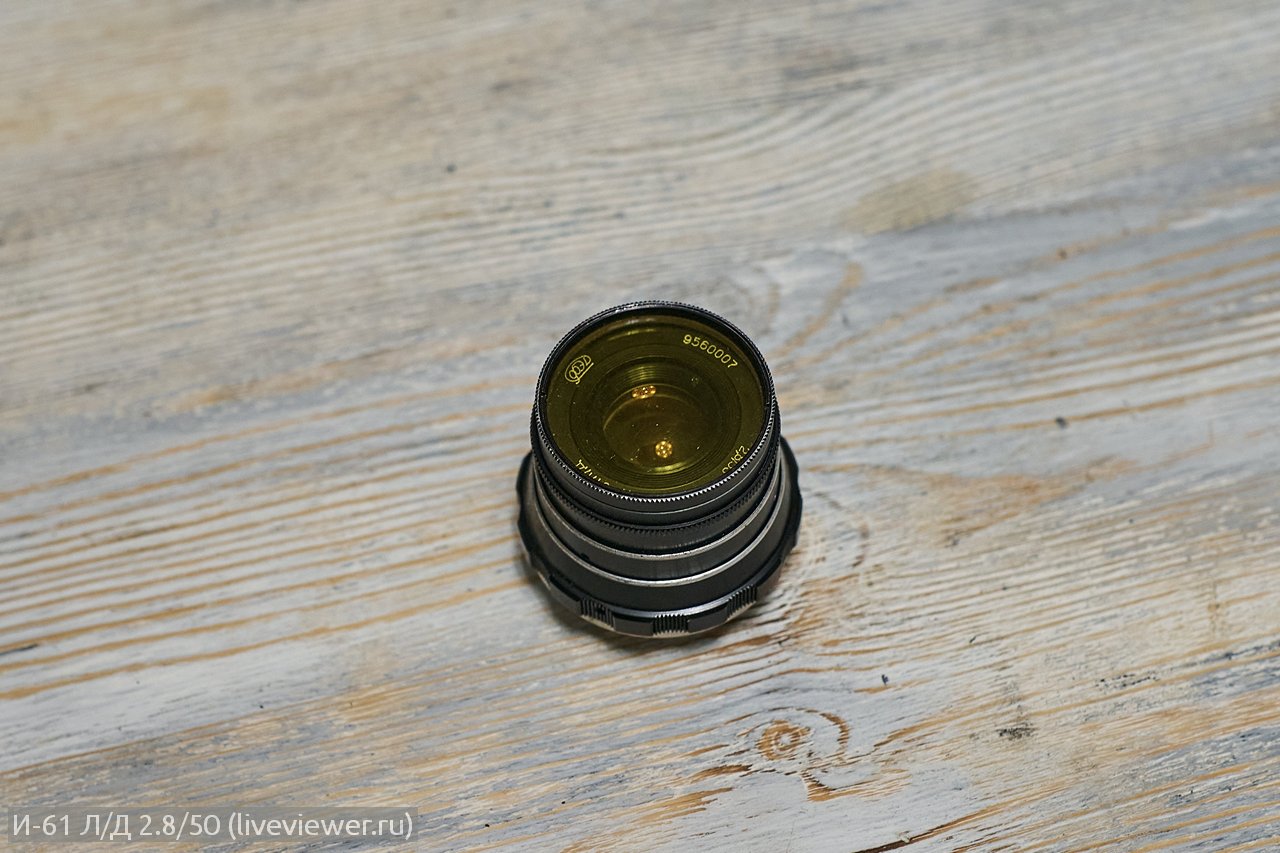 Industar-61 L/D is a four-lens anastigmat of medium aperture with coated optics. Equipped with an iris diaphragm. Made according to the "tessar" scheme, they have a huge number of brothers from other manufacturers around the world. High sharpness, minimum distortion. The lens exhibits excellent sharpness (compared to past generation Industar type lenses) and color reproduction in use. The first domestic consumer photographic lens that used super-heavy crowns (STK-6 grades in two positive lenses).

In technical specifications and on the lenses themselves focal length was indicated as: 50 mm, 52 mm, 53 mm and even 55 mm.

Despite the difference in one letter of the abbreviated name, identical circuits and glass, lenses of a mirror and rangefinder format have different designs.

Industar-61 was the first domestic consumer photographic lens to use super-heavy crowns (STK-6 brand in two positive lenses). Subsequently, the use of lanthanum and other special glasses in lens indexes was not particularly noted.

I would not say that the image quality of this lens is somehow terrible. No, it is excellent in terms of price / quality ratio, and only if used correctly (you should learn to feel the glass on the camera and its features). 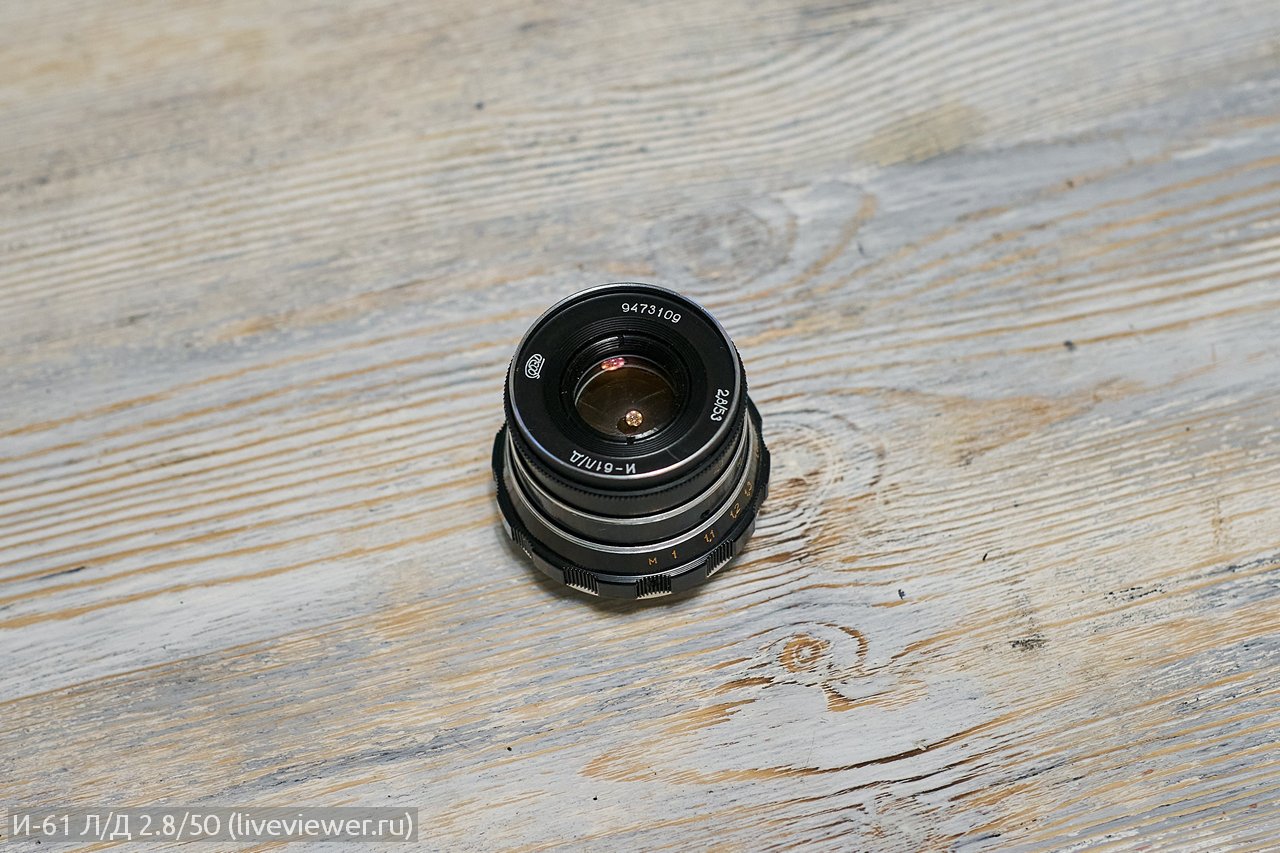 Industar-61 does not like backlight and bright light sources in the frame. From them the contrast of the image sags. Sharpness characteristics at a level sufficient to separate the object from the background - in order to understand later on the print, what exactly is the emphasis on the photograph. Of the entire Industar lineup, the I-61 is objectively the best. All previous versions lose to lanthanum glass as an image.

The build quality is good. I-61, of course, is not without backlash, but it does not look and does not feel loose, flimsy. The lens from the review required lubrication, disassembly and maintenance. In disassembly is quite simple, does not require special skills. The values ​​on the case are engraved, the engraving is filled with paint. The curved font on the frame gives the impression of an unskilled approach to production.

The focusing ring of the lens is narrow, located at the bottom of the barrel. The focusing ring can be rotated 180 degrees. Ease of rotation is controlled by the density of lubricant under the lens ring. The minimum focusing distance of Industar-61 L / D is 1 meter.

The diaphragm is easy to control, there is a lock to hold the selected value. Diaphragm blades blackened, 6 pieces. They form hexagons from highlights at small values ​​of the relative aperture. Very sharp from open apertures, and allows portraits with a slight background twirl. 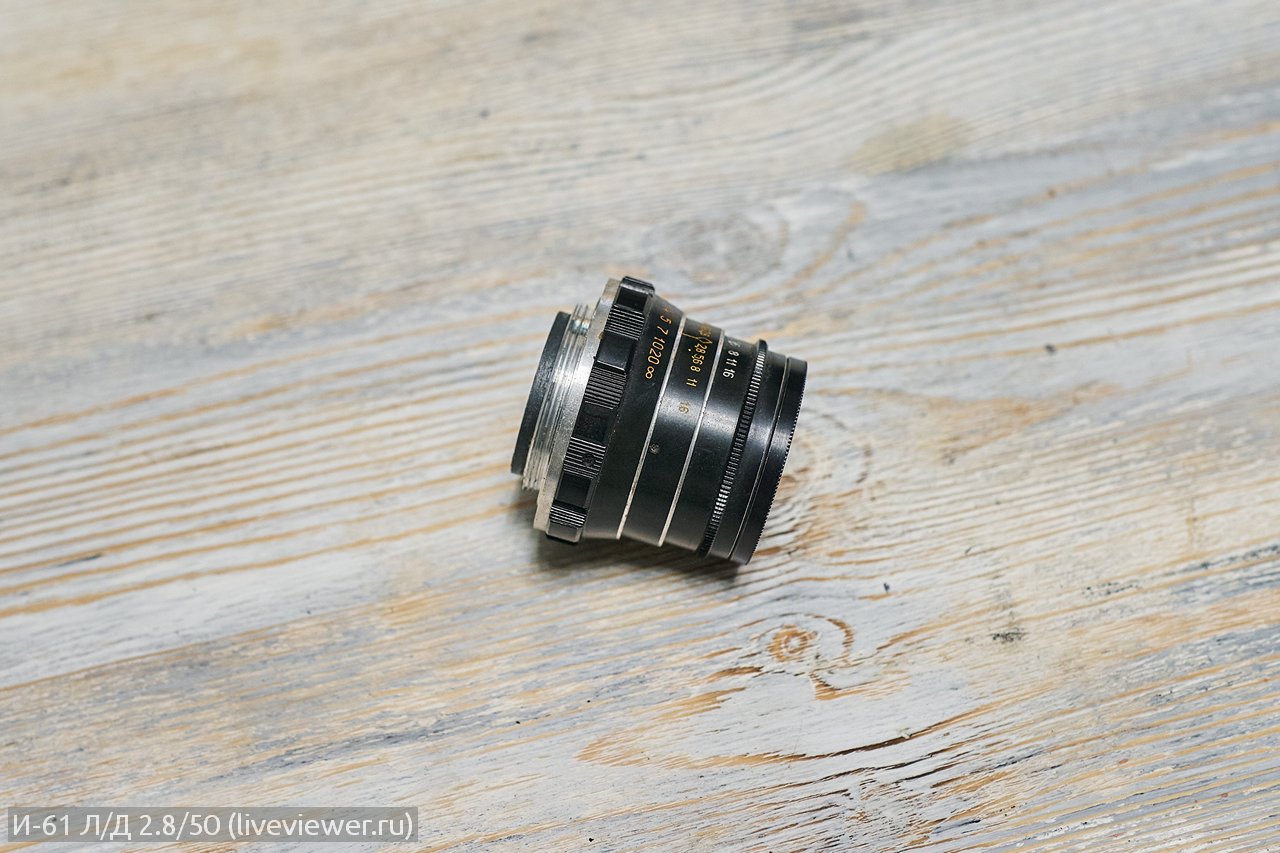 The depth of field is shallow enough for portraits. Background blur is present enough to maximize this lens, apertures. Sharp across the frame at f/5.6. There is a depth of field calculator on the frame to calculate the depth of field. The zone of sharpness can be set using the calculator from the lens barrel and shoot without looking into the viewfinder.

The lens corrects or minimizes aberrations such as astigmatism, spherical aberration, and spherochromatic aberration. Among its predecessors and contemporaries made in the USSR, the lens clearly loses to Helios of any version in artistic terms - Industar gives a more technical background blur.

It is the I-61 L / D that is the best of the Industar rangefinders - only the Industar 50-2 for SLR cameras can beat the quality characteristics, which felt like it was significantly redesigned from the I-50, and the work on updating it did not go unnoticed.

Photos from the I-61 L / D before and after processing:

Lens for installation on rangefinder cameras. Due to the smaller working distance of the rangefinder lens, use on SLR cameras is limited. The focusing distance after attaching the lens to the DSLR only allows shooting up to 2 meters. Without such problems, the lens can be mounted on mirrorless cameras such as Sony NEX, Canon EOS M. (via the appropriate adapter from the M39x1 thread). In this case, the lens will have a viewing angle equal to the equivalent 85 mm- a lens for a full-frame camera due to the crop factor of APS-C matrices and aperture in EKV. f/4.5.

At full frame, it will work as intended and stated on the case.

The main probable application of Industar-61 L / D is bust portraits. The lens is not suitable for video shooting. management is far from the best. The DSLR counterparts presented below are a legacy of yesteryear that is still in vogue today.

Helios of any modification will have better artistic characteristics due to the working wide aperture of f / 2, and the older Helios models are slightly more resistant to backlight.

An analogue of Industar-61 L/D, differs in the design of the frame and the working length, which allows using it on Canon SLR cameras through an adapter. Much sharper and less prone to flare, as the lens is recessed into the body. The minimum focusing distance is 0,3 meters.

Made according to the "Tessar" scheme, has a sharp and clean picture, good sharpness, easy to handle, lightweight. Widespread and cheap.

Shot with a Sony A7 mirrorless camera. Basically aperture priority.

On a reflex camera

Since when installed on SLR cameras it turns into a macro lens, here is an example of photographs of how the picture will look when you install the I-61 on a SLR.

When you pick up this lens and install it on your camera, you should clearly understand that its contemporaries, foreign-made, will give the best image quality. However, if we consider the lens as an option for training, or trying out manual optics, it suddenly turns out that due to its cost, as well as excellent characteristics, this is the most suitable option.