The production of the Tair series started in the mid 50s of the last century and ended in 2005.

In 1958, the Tair-3FS lens (Photosniper-3 kit) won the Grand Prix in Brussels, and a year later was awarded the Second Degree Diploma of the VDNKh of the USSR. The Tair-12C lens used in the Photosniper-3 set has satisfactory optical qualities (see the TX table), but at the same time it has a large weight (about one and a half kilograms). Tair-3FS is part of the "Photosniper-12" kit, the base of which is "Zenit-12S» with arrow or LED exposure indication in the viewfinder and lens electrical connector. The kit also includes a Helios-44M-4 lens of one of the modifications. 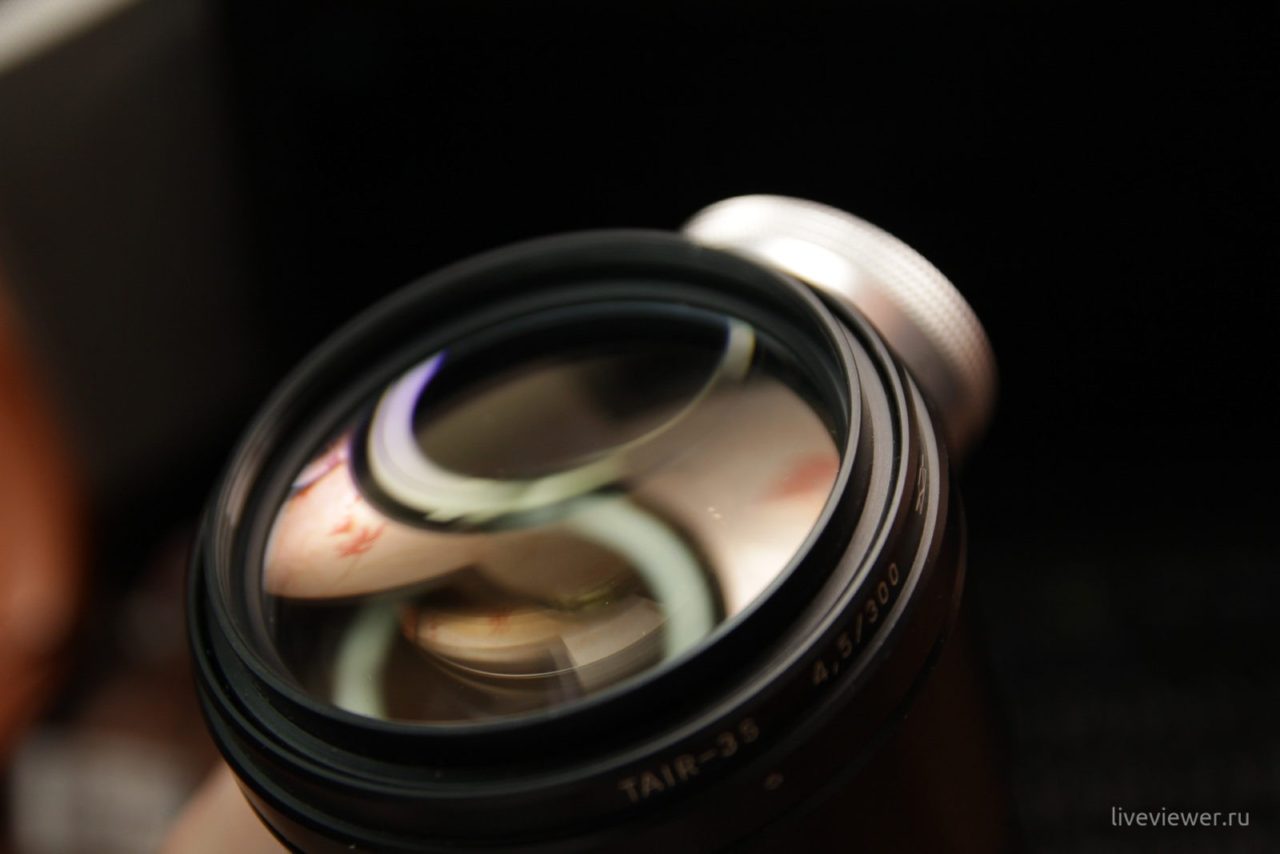 The calculation of the optical scheme was carried out David Samuilovich Volosov (later, author of the book "Photographic Optics" (1971).

Tair-3S 300mm can be found with both simple and multi-coating (MC). Early copies (Tair-3FS) were produced in a white case. Tair-3S has constructively different brothers Tair-11A, 33, 38C, 56, forming a whole series that has been produced for almost 60 years. Tair 3A - one might say, the twin brother of Tair-3C (differences in housings and diaphragm setting mechanisms).

An experimental model of the Tair-3T (television) lens is known, which could be used with high-resolution photographic materials (up to 130 lines / mm versus 68 for serial models). At different times, the lenses were produced by the Kazan Optical and Mechanical Plant (KOMZ), Krasnogorsk plant named after S.A. Zverev and Zagorsk Optical and Mechanical Plant, Sergiev Posad.

The diameter of the thread for the Tair-3C 300mm filters is 72 mm, the lens is really huge. The length is about 30 centimeters, the weight is one and a half kilograms.

The frame of the Tair-3C lens is made of aluminum. The main weight is the front adhesive lenses. The lens requires a tripod, since in low light even at f / 4.5 we will get guaranteed image blur if we don't find a stop. In sunny weather, the lens works wonders. The use of Tair-3 lenses was recommended if it was necessary to obtain good image quality. 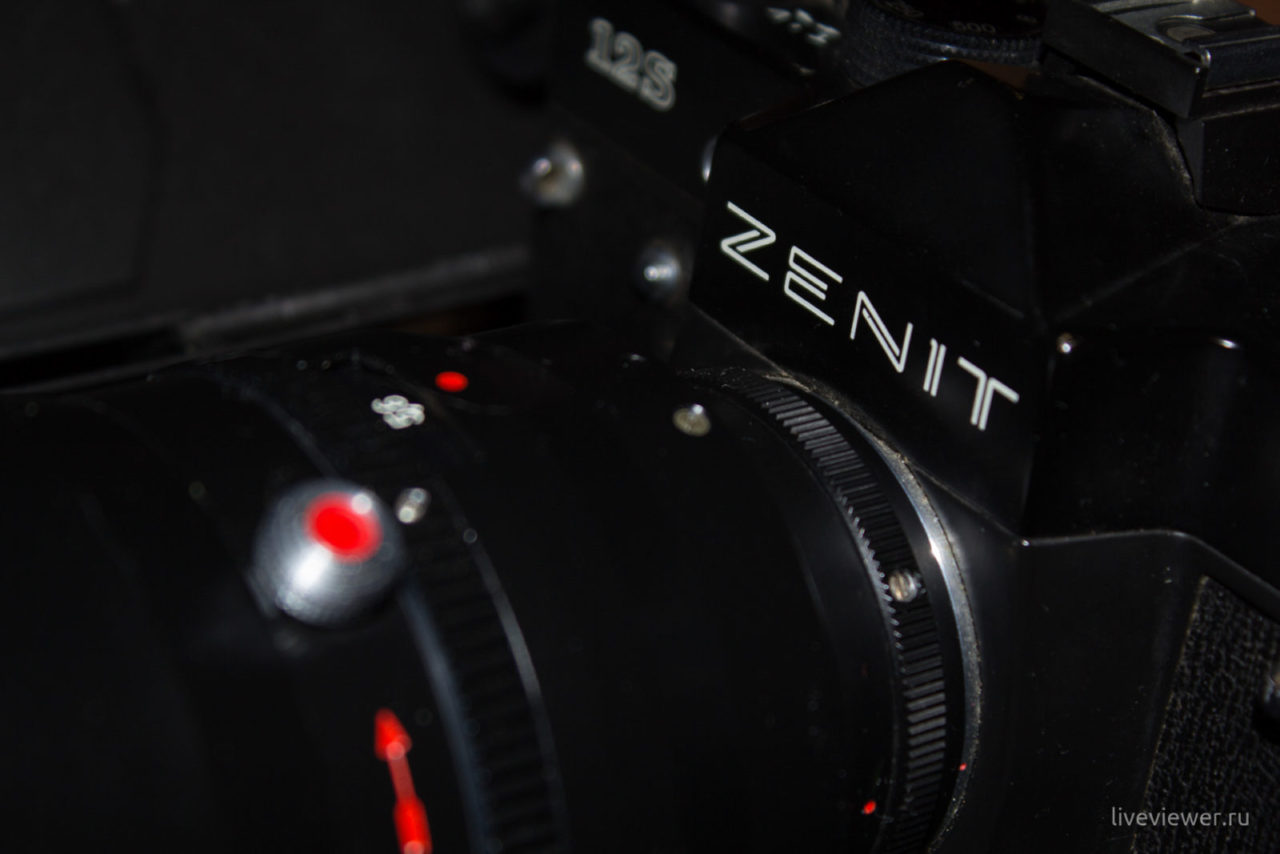 Despite the apparent solidity of the construction, the lens is quite delicate and requires careful attitude to itself. The slightest distortion of the lenses (even by 0,03mm) can damage the picture. In particular, anterior gluing produces noticeable aberrations when the geometry is violated.

Technical characteristics of the lens Tair-3S

Instant focusing - this is an indisputable advantage in work. However, in the design lens Tair-3S used a design that does not allow prompt response to changes in the situation. Plus, the problems of centering the bed affect. A full turn of the focusing drum is carried out in 4 hand interceptions and is about 270 degrees. Focusing is carried out by rotating the ratchet at the front end of the frame lens... When focusing, the front massive part of the lens extends, hence the vacuum cleaner. 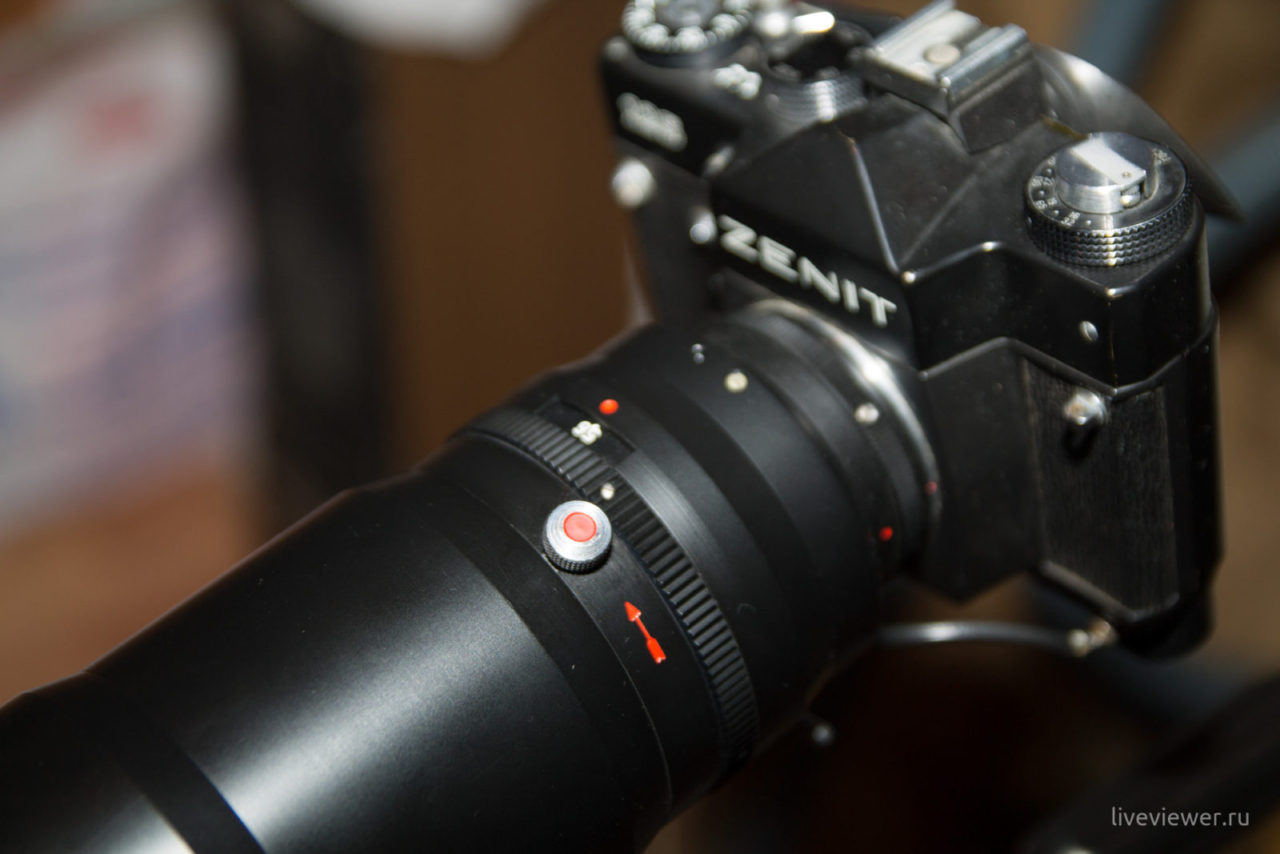 The diaphragm has a manual preliminary cocking, when the trigger of the photogun is released, the diaphragm is first closed to the set value (and only then the cocked gate apparatus). This causes a certain inconvenience when working with Tair-3C. For example, to view the depth of field, we first have to cock the aperture (to open it), and then (by setting the desired value) release it by pressing the trigger. You can, of course, turn the diaphragm setting dial without cocking it, only for some reason both times, when I tried to do it, the diaphragm fell apart. Probably, such a copy came across to me. 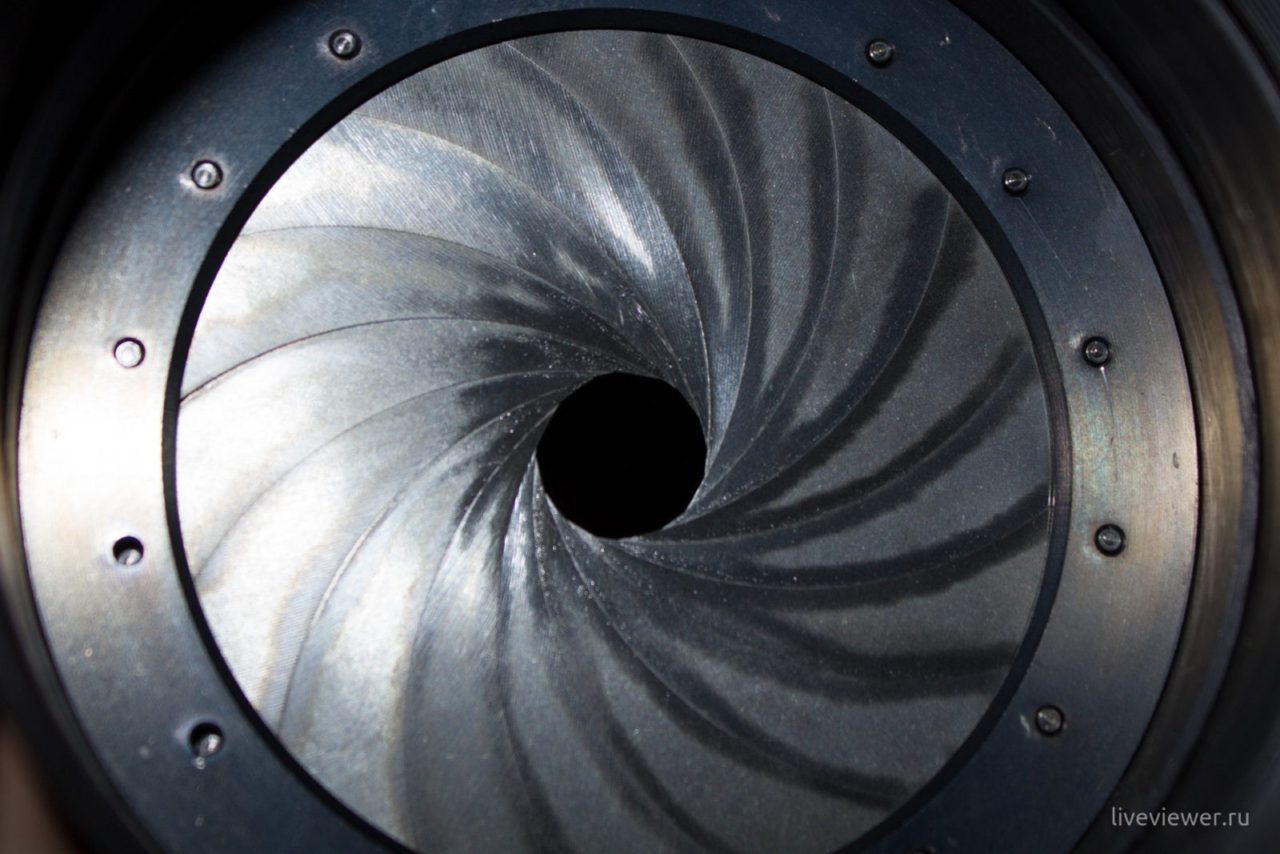 16-petal iris diaphragm Tair-3C gives perfectly smooth circles in the out-of-focus area. The petals are not painted, have a matte finish. In case of non-observance of the rules of operation inside lens condensation forms and the diaphragm blades can stick together - guaranteed disassembly and maintenance lens... There are no depth-of-field scales on the lens. 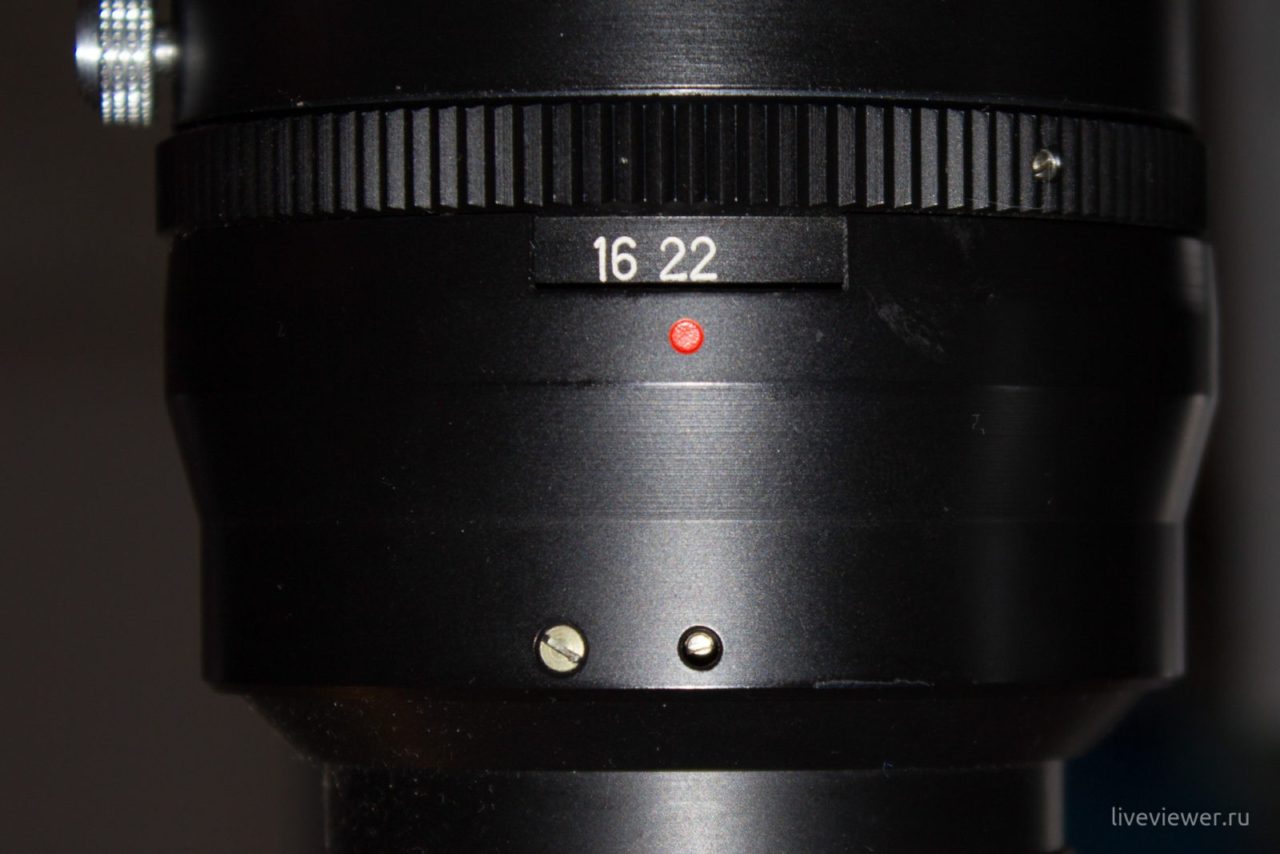 It is carried out by rotating the ratchet drive in the front of the lens. The fine DOF when open is a problem when focusing through the viewfinder.

In order to end up with the correct exposure in the photograph, the lens transmits the set aperture value to the camera, and the exposure meter already makes a correction based on the current illumination. The arrow of the galvanometer in the viewfinder is deflected towards the introduction of the necessary exposure compensation. Given the pitch of the mode selector shutter, the values ​​are approximate. Pay attention to electrical connection lens Tair-3C with a camera - in the absence of contact, the galvanometer arrow will show the parameters calculated on the basis of the currently incoming lighting, without making an amendment from lens. 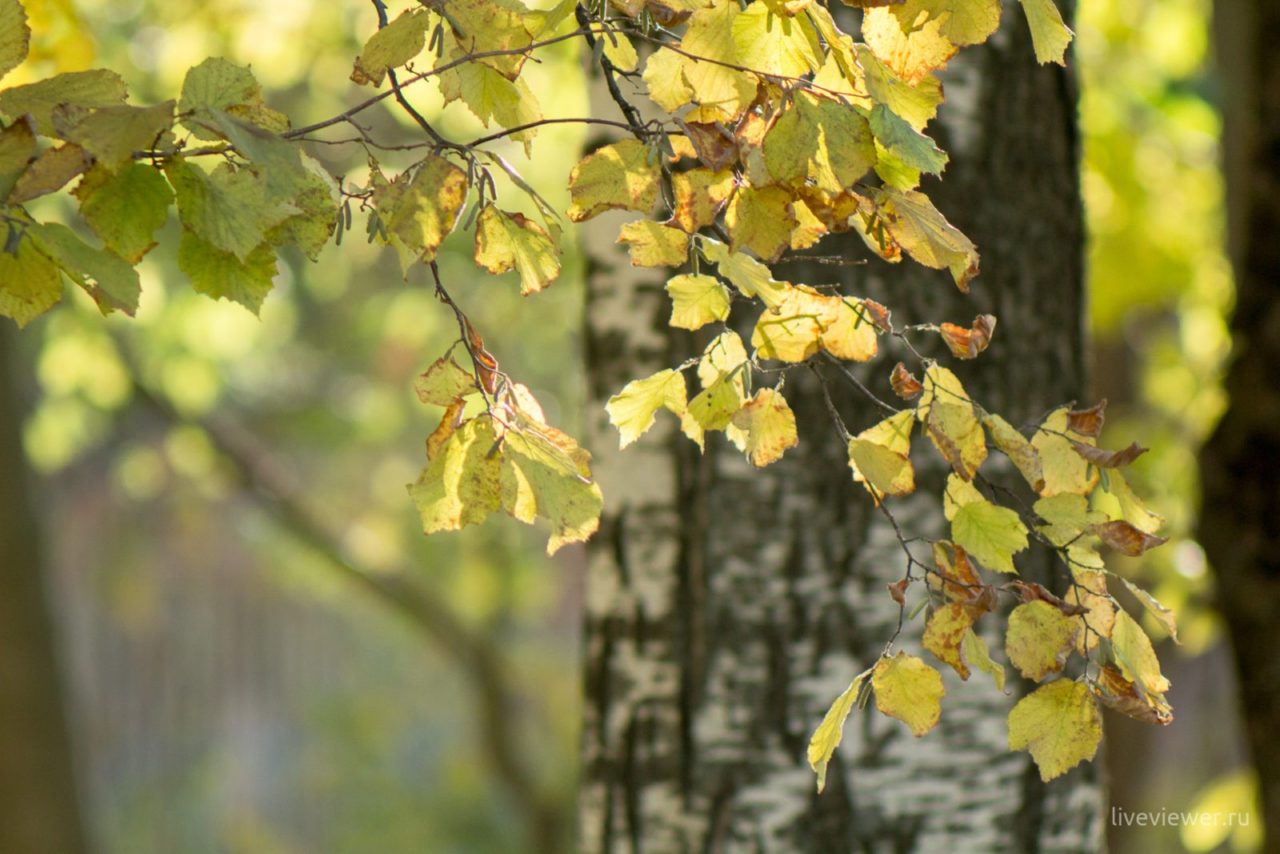 I'd like to add that when used as part of the kit, the lens showed itself very well, the image quality is good both on film and on digital (used with Canon 60D). The city attracts the attention of others. Birds in the woods are not intimidated by the click of the diaphragm mechanism if the tension springs are adjusted appropriately.

To work on digital cameras, you will need an adapter with M42x1. It's easiest to try Tair on a Canon EOS with an EF mount, especially considering that adapters without chips on Canon cost mere pennies. I can only say that it is inconvenient to use a lens without a stock; for use with the CZK, you will have to move the shutter release button under the gun carriage trigger. Attention! The Tair-3 lens on crop 1.6 will have EGF (equivalent focal length) and the viewing angle is equal to 1.6x300 = 480 mm! That is, the viewing angle will be smaller, you will have to move away further.

From Canon 60D DSLR camera. The pairing of the camera with the lens was initially carried out through the M42-Canon EF adapter, and later, it was possible to install the camera directly on the stock, and combine the release system with the control shutter cameras through the connector for the wired remote control.